You won't say nothing to no one

So let's see if I can finish the story of the day at Cedar Point, a month ago. (Spoiler: I can't quite, but here's hoping Monday finishes things.) With the rain receding, and the park opening up again, what to do? Wicked Twister, of course. It was the biggest reason we were there instead of a week later (or sooner). And with the rides opening again, and the park crowd thinned out by hours of bad weather? Wicked Twister's sign actually promised the ride was a walk-on. It wasn't, but it was an even shorter wait than the first time. We aimed toward the back, but didn't go waiting for any particular seat. And this gave us our second experience with the linear induction motor's great virtue, making the train just suddenly go with almost no discernable acceleration. And with the moments of freefall, at the top of the front and back towers.

With the goal of our trip now achieved --- twice --- we would revert to our default experience, trying to catch all the roller coasters. At least to get them all in the season. There are ones we knew would have lines too long to endure, such as Maverick or Steel Vengeance. If we ride them, it'll have to be at Halloweekends, which ... we're still deciding whether to take a Halloweekends trip this year. On the one hand, Halloweekends is even longer than usual --- they're opening Thursday evenings, and for a more full day Fridays --- but on the other, Covid-19. While Michigan isn't handling it great, Ohio is governed by a murder cultist, and it shows. And while The Breakers hotel is certainly not a hermetically sealed facility ... jeez. I mean, it's hard enough thinking about going to Motor City Furry Con, which demands vaccination for all attendees.

Well. The big-ticket rides aren't our favorites anyway, apart from Steel Vengeance. We would get on Corkscrew first, our old dear friend, and enjoy a near-backseat ride there. And Iron Dragon, which we always worry will be The Next coaster to be taken out, and which seems to be holding on all right. (It might be sheltered by fitting this nice niche between the kiddie coasters and the 200-foot-plus coasters.) And then Rougarou, which had a delay getting on because one of those curious mobs of people who aren't going anywhere, but also aren't breaking up, was standing in front of the entrance for quite a while. Rougarou's line was easily a half-hour or so, which seems long. I wonder if the ride's conversion from Mantis was that successful or if it's that with the taller and more weather-sensitive rides like Millennium Force and Top Thrill Dragster still closed people were getting what rides they could.

Blue Streak, the remaining wooden coaster, had a sign warning of a 15-minute wait, I think it was. Not so; it was a walk-on, and we were able even to get front-seat rides. Just glorious. But now we were coming already to sunset; we knew the 150th Celebration Parade would be starting soon. The question was: could we get one last ride on Wicked Twister in, before that all started?

We would, yes. Our last, twilight ride on Wicked Twister was another one without too long a wait, and it let us see the park in its most wonderful air, where all the ambient light is dim, but every building --- and the parade --- was brilliantly illuminated, light screaming out to the whole world. Absolutely gorgeous.

And then, paused not far outside Wicked Twister, was the second target of our visit and the thing that would have got us to Cedar Point by mid-August regardless: the Parade.

Now back to pictures of Cedar Point from this same trip. 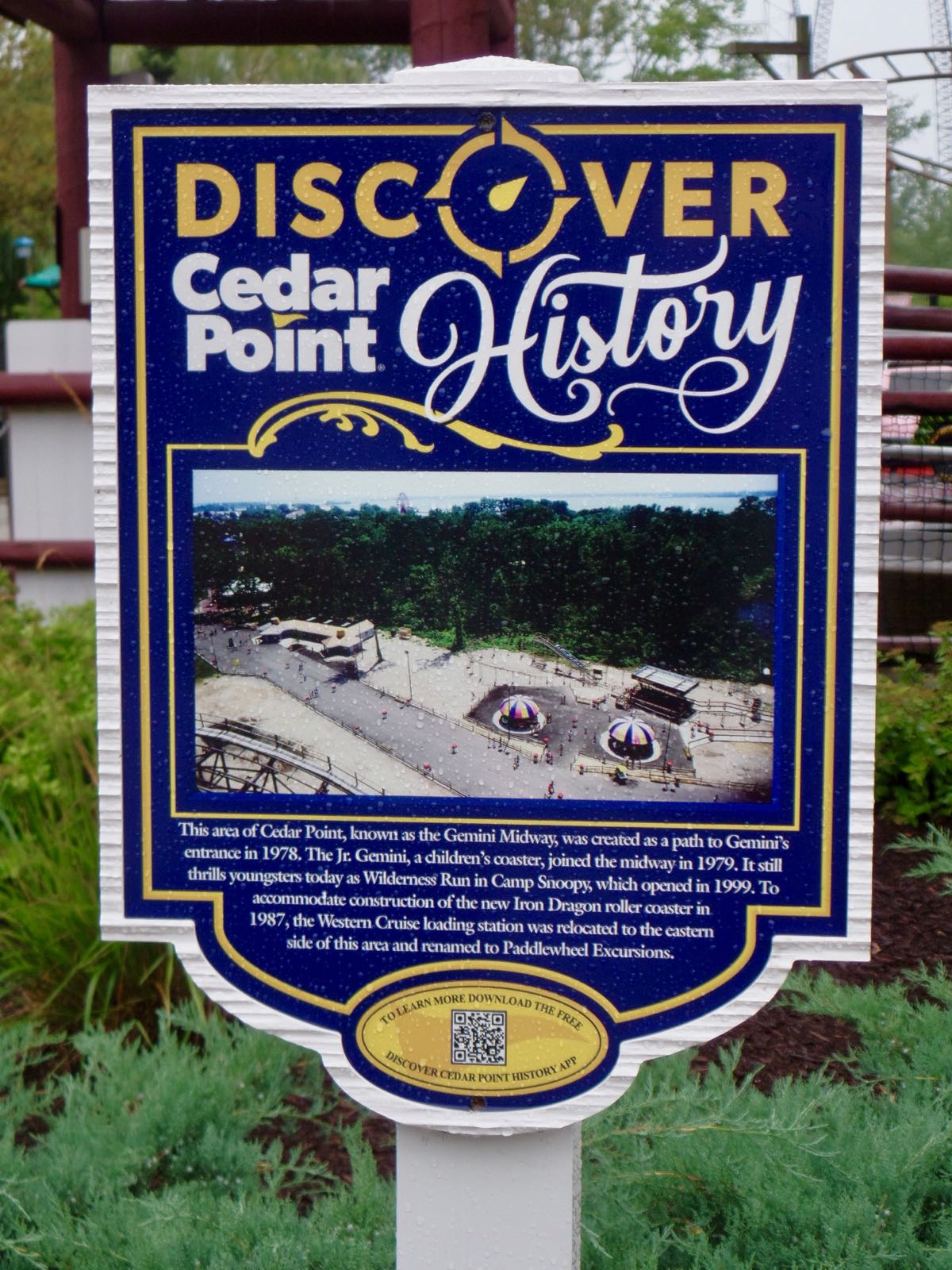 Another historical plaque, commemorating the building of the Gemini Midway. With the building of Gemini in 1978 Cedar Point took the title of tallest, fastest, steepest roller coaster in the world, by pretending the taller, faster, or steeper roller coasters didn't exist. It was a major step to the park as we now know it, though. 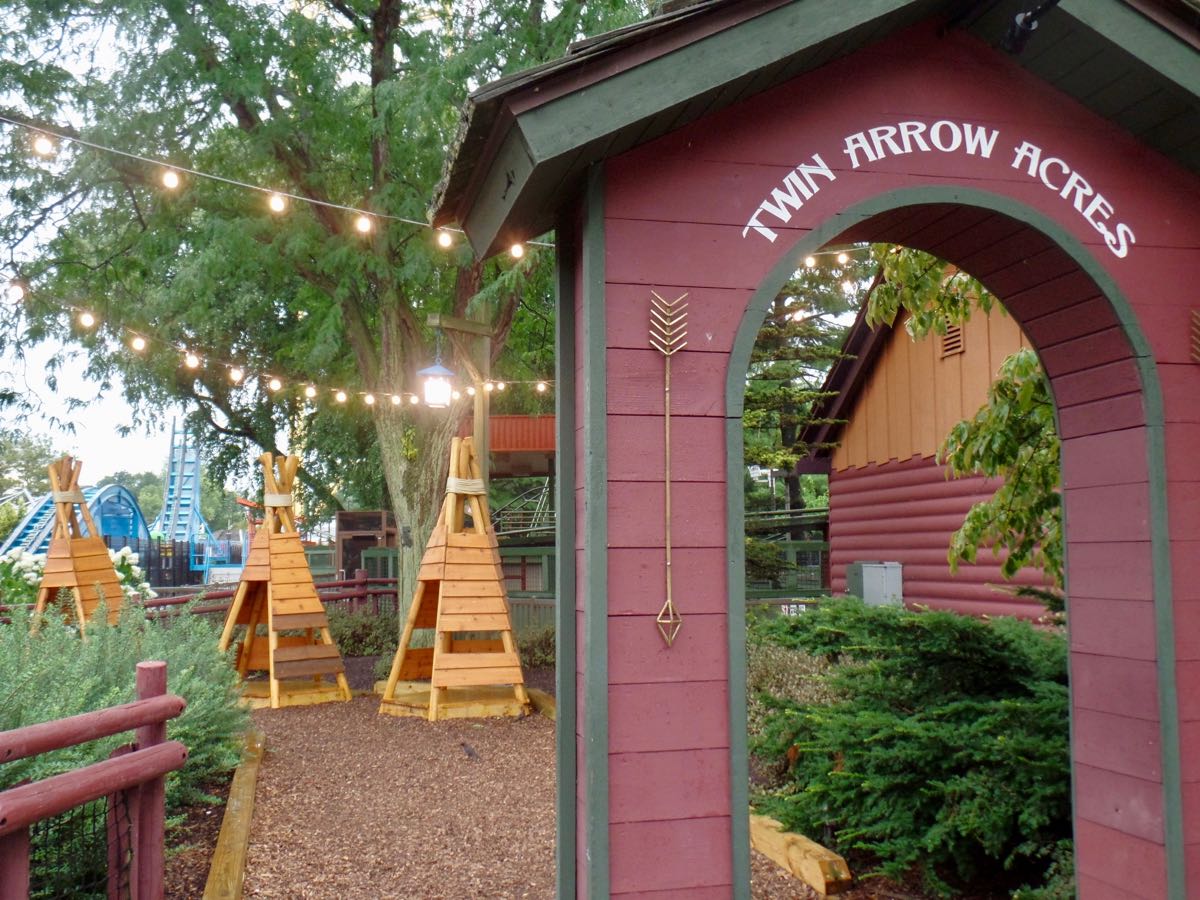 ``Twin Arrow Acres'', a little sitting and play area set up where the Snoopy Bounce used to be. In the distance that track you see? That's not a roller coaster. It's the Pipe Scream, which Cedar Point sometimes tries to list as one. 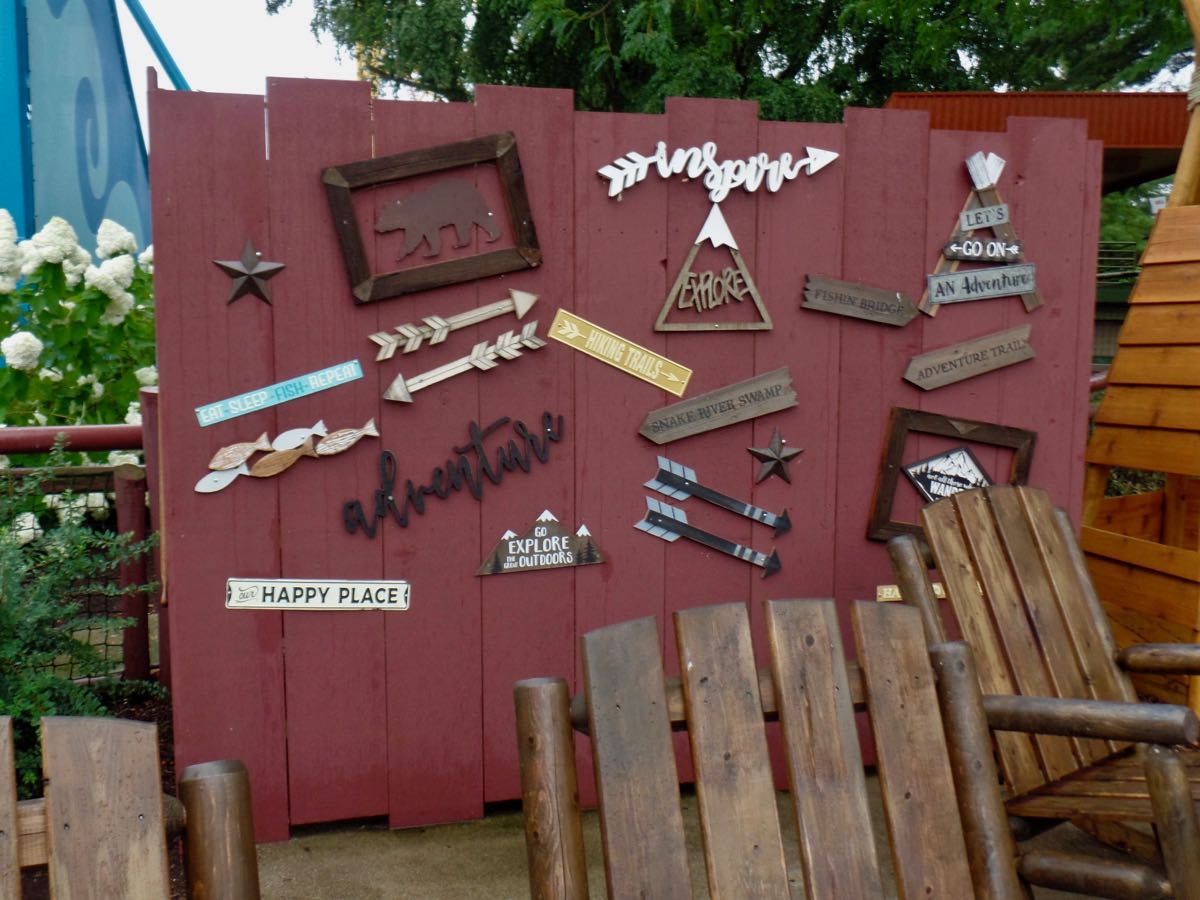 So the decor of Twin Arrow Acres is what

bunny_hugger aptly described as ``Here's a hundred bucks, buy Wine Mom stuff at Michael's for your cabin up north''. 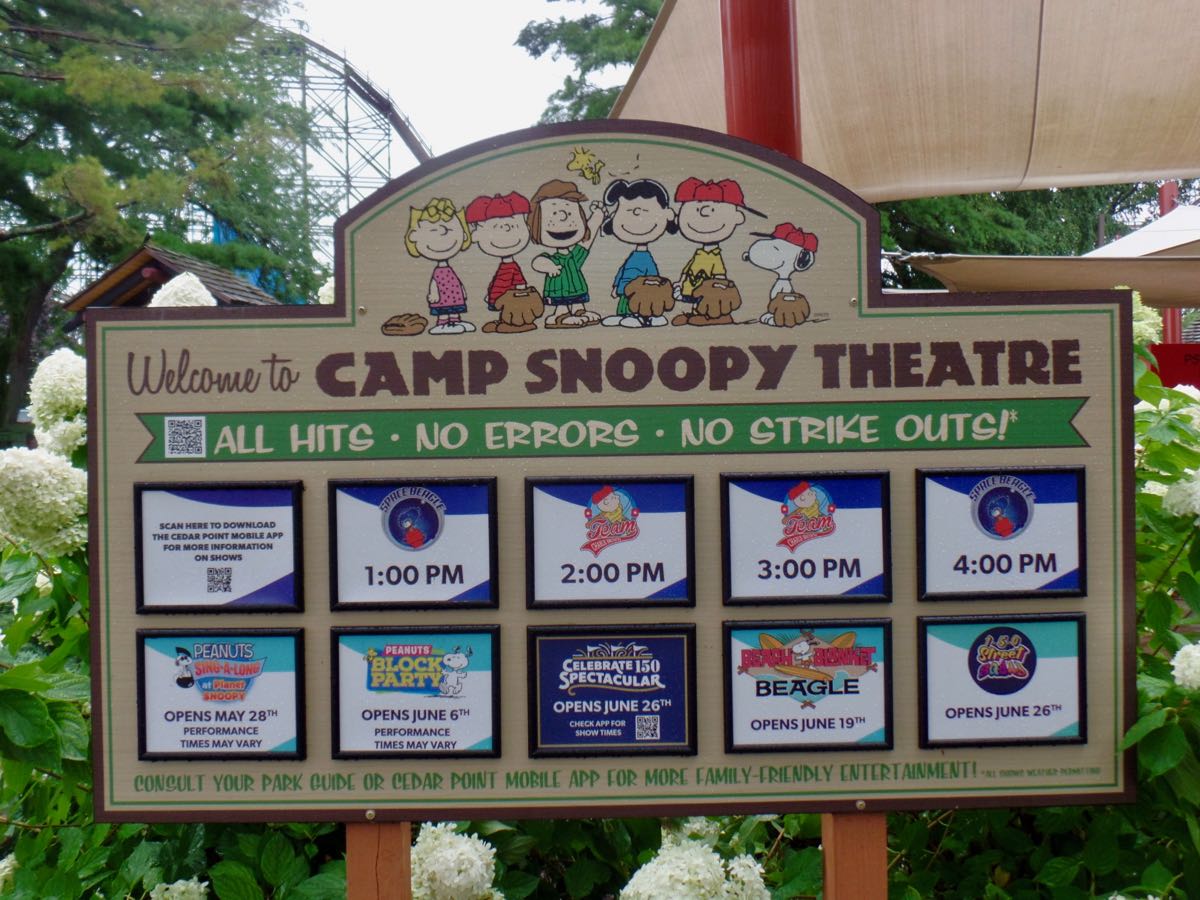 The schedule of Camp Snoopy Theater things. None of this was running that we saw, for good reason. We didn't even get to the park until after 2:00. 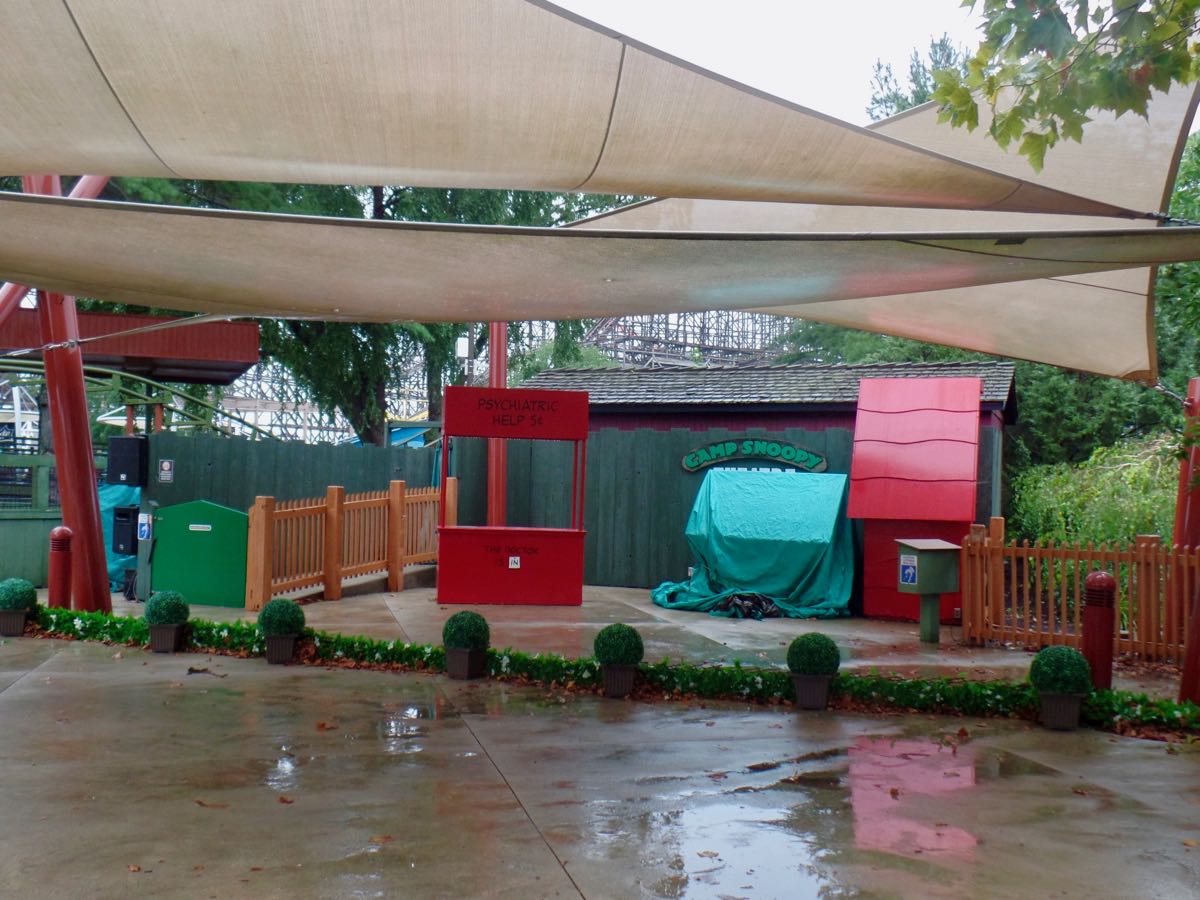 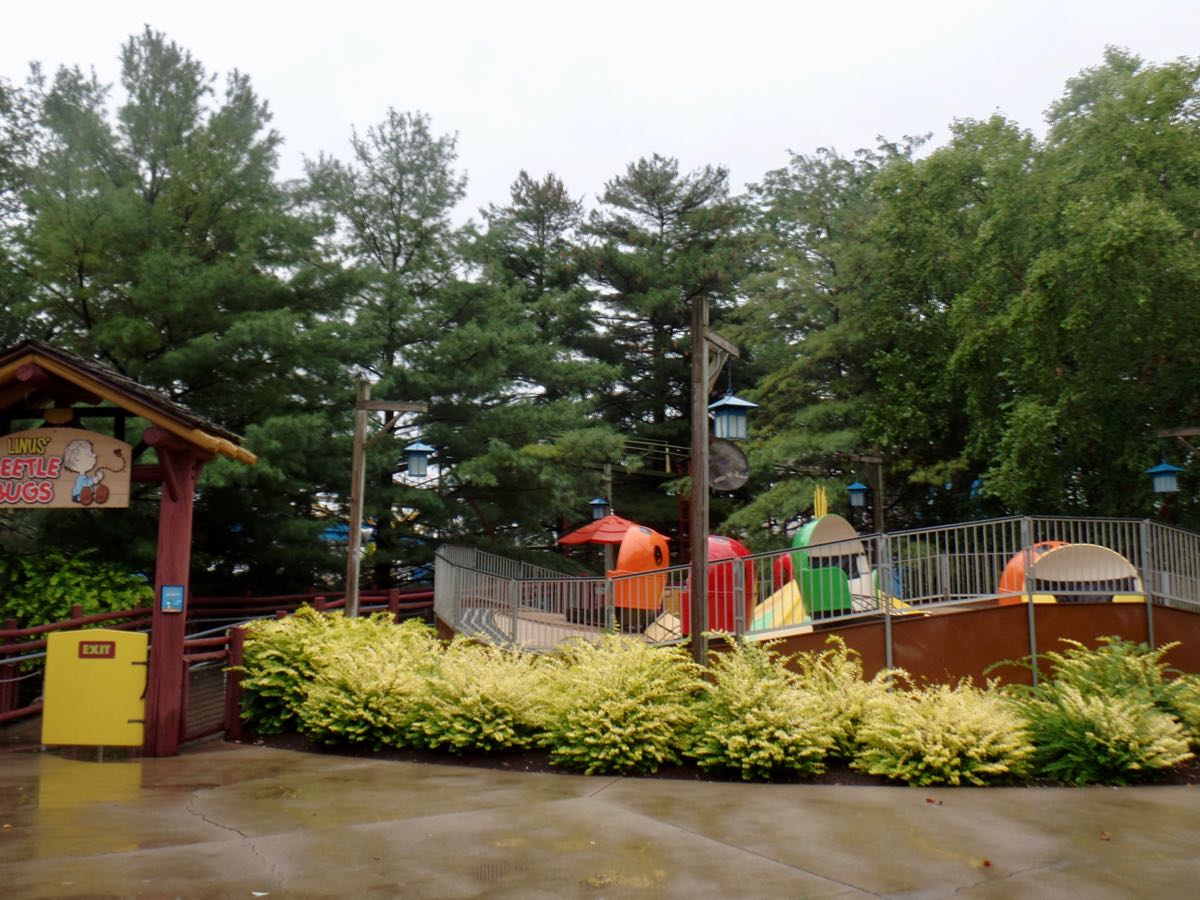 Linus's Beetle Bugs, which is where you'll find Cedar Point's Tilt-A-Whirl. Also, boy, yeah, who thinks Linus and doesn't remember his love of bugs(?) ... Also I'm not 100% sure that isn't Rerun. Going to have to check whenever we're at the park next.

Trivia: In a May 1672 convention of the self-proclaimed ``Assembly'' in Elizabethtown, New Jersey, declared the colony's proprietor, Philip Carteret, deposed and named his son, James Carteret ``President of the Country''. Source: New Jersey from Colony to State, 1609 - 1789, Richard P McCormick. (James was taken to be a more pliant Lord Proprietor. The issue was one about the quitrents that landholders may or may not have owed the Proprietors.) (No colonial charters were really good models of clarity or coherence but New Jersey had it bad.)