You never heard it

So we finished our twilight ride on Wicked Twister, which we knew would almost certainly be our final ride on it. (So it has been, although it is imaginable that they're going to move the ride to another Cedar Fair park, where we might ride it again. No way to know yet.) And we could hear the noise of the 150th Celebration parade. We knew roughly where it was starting, and we knew that it stopped along the way to give the performers time to dance and do stunts and other things. What we didn't quite realize was that they stopped several times, including one stop that was pretty near where Wicked Twister let off. This explains part of why it took forever for the parade to get to us, when we visited in June, too.

The parade is a bunch of floats, reflecting key elements in Cedar Point history. The 'flags' entrance they had in the 50s through 80s, for example. The Hotel Breakers. The Cedar Downs racing merry-go-round. The Water Swings, this ride from the early 20th century that was a circular swing set out in the water, that you rode until you dropped in the surf for. A float representing midway games. One representing roller coasters, including stunt performers on inline skates, some rolling off and back onto the float. Nearly all that some animated elements, even if it was just the representation of the ferry that used to bring people from Sandusky to Cedar Point, with a guy at the bridge who looks like The Colbert Report Era-Stephen Colbert in a captain's outfit. And in-between most floats were dancers, mostly outfitted to match one of the adjacent floats. Some were people in Vaguely 1910s outfits. Some, like around the Hotel Breakers float, were dressed as waiters or maids. Some had carnival-game outfits, like, with basketball hoops as hats, tossing balls out to the crowd to try and get someone to toss balls back in. And there were moments when people were called up to join the parade and dance; mostly kids responded, coming out and dancing to ``Footloose'', part of the many 80s songs used as backdrop for the parade.

After the parade moved on from its first stop, we realized we could rush ahead along the route and see it from a different perspective. So we --- and many other people --- rushed through the Snoopy Boutique, along the way

bunny_hugger losing a face mask she can't figure how she dropped, and got to the next parade stop at ... just about the same spot we'd been in before. Only now we were on the main midway, instead of the former Oceana Midway.

We rushed ahead another time, catching a third stop of the parade for all the floats to show off their business and the dancers and stunt performers to show what they could do and for kids to come up and wiggle around to the sounds of ``Footloose''. Also for another round of the parade bursting confetti out at people, and for people to run around grabbing ribbons of confetti. I love the disposable as souvenir but couldn't bring myself to get any of it, although

bunny_hugger did venture that this might be a decent kite tail.

Finally, around 9:30, the parade got to the Celebration Stage or whatever it's called, the performance stage set up opposite where Wildcat used to be, this for the big 150 Years celebration show. This with a lot of loud music --- several times we relocated to get a little farther from speakers, hoping to balance being near enough to see and far enough from other people --- and, well, a lot of changing ``One! Five! Oh! One! Five! Oh! One! Five! Oh!'' as the numerals flashed across a screen.

The show was a slightly disjointed history of the park, talking a bit about the park's origins and its oldest attractions like the Hotel Breakers and the water swing; the floats for those, arranged around the stage, were lit for that. The host talked about how his grandfather's favorite ride was the Cedar Downs, a hundred years old, calling them the only horse race he never lost money on. This right away set off our offended-historian impulses because while it's true the Cedar Downs are a hundred years old, they had been at Euclid Beach Park in Cleveland before 1965. And the Midway Carousel --- the ride that's been at Cedar Point the longest (installed 1946) --- got no mention at all. They also did a little comic sketch using the two Cedar Downs parade floats, with people dressed as 'grandpop' and 'grandmom' riding them as the floats moved around a bit.

bunny_hugger wondered if this was a subtle diss of the racing merry-go-round, positioning it as something for the Olds. I think that's over-parsing the sketch.

The history got into the sorts of musical performers they got in the 30s and 40s, and the show went into a music revue, starting with performers playing the Andrews Sisters. And then into the music of the 50s and the 60s and 70s and 90s and to today, jumping over the 80s for no clear reason except maybe those were covered enough by the parade already. Also the tie between popular music of the decades and the history of the park isn't precisely clear.

Through this there wasn't much mention of rides besides Cedar Downs. And no mention at all of roller coasters until the end, as the emcee talked about how they're the big distinctive thing that everyone loves, and urging everyone to clap for their favorite coaster as they read off a list of all the operating coasters. The list started with Blue Streak (the oldest, and only wood coaster left), and then defied our guesses about what order they were in. My suspicion is that it was the results of some popularity survey, excepting Blue Streak as giving the first spot for its position as oldest coaster at the park. Our hearts were there for Blue Streak, of course, but we couldn't ignore giving Iron Dragon attention. Also Wicked Twister, for sentiment.

And the emcee promised the fun was just beginning, and the show returned to a big triumphal tune about the park's history and promise, and the much-vaunted fireworks started. A smaller show than we expected, which might be why we didn't see them when we went to the park in June. But still, just ... wow.

We got to the popcorn shop just moments before it closed, and got a bin of Chicago corn that we would devour before we even got on the Ohio Turnpike, because it turned out they closed the cheese-on-a-stick place before we could get there. We got the night picture of the Midway Carousel illuminated like a jewel beside the 150 Years sign, and my camera ran out of batteries just as I took a farewell picture of the gate.

I mentioned, far back, going into the day with an incredible existential dread. And now, after a long day, with so much driving, so much rain interrupting things ... well ... here, now, it was feeling healing. It was feeling all right. I was in the midst of a big celebration, spaced enough I didn't feel unsafe. Soaked in happiness, in the promise that you have had fun, you deserve to have fun, and you will have fun again. It was very much the sort of healing and nurturing day I needed, especially then. This was the day I needed, the chance to some of the intense scarring of the pandemic, and the Trump years, at least feel for a day like they could heal. It is trite to call it magical but some days are.

Five hours later my car was shoved off to the shoulder of an off-ramp not a half-mile from home, dead because I drove it into a flooded intersection.

Now I've described the day at Cedar Point. Let's get back to seeing pictures of it. In photographs I'm at about 6 pm, when the rain had finally stopped and we did our big long walk and were wondering if the rides would reopen or if we'd go home having ridden two things in the park, which would have been pretty neat if we had, must admit. 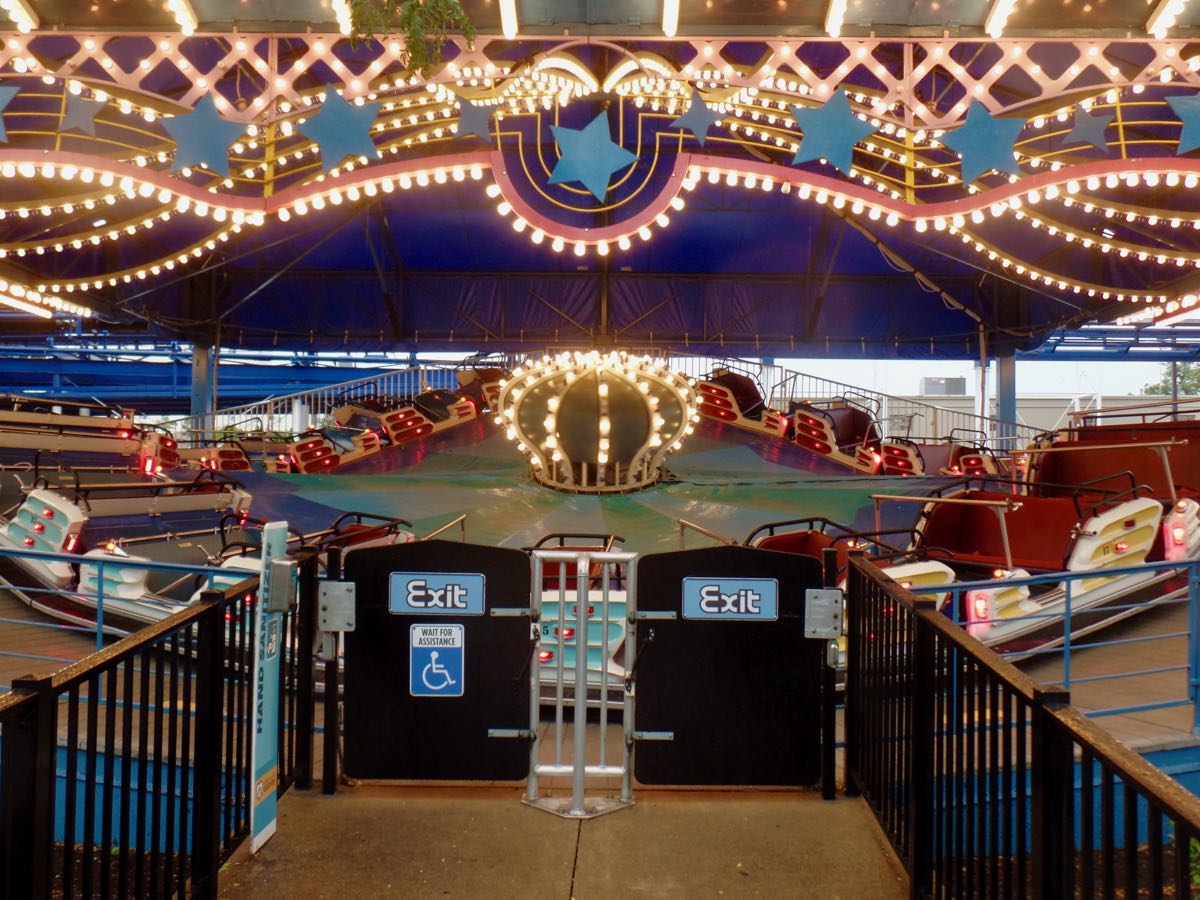 Matterhorn, one of those flat rides we keep expecting them to take out because we don't ride it ourselves, with its lights back on and looking ready to restart. Note the wonderful old-fashioned style of the Exit signs. 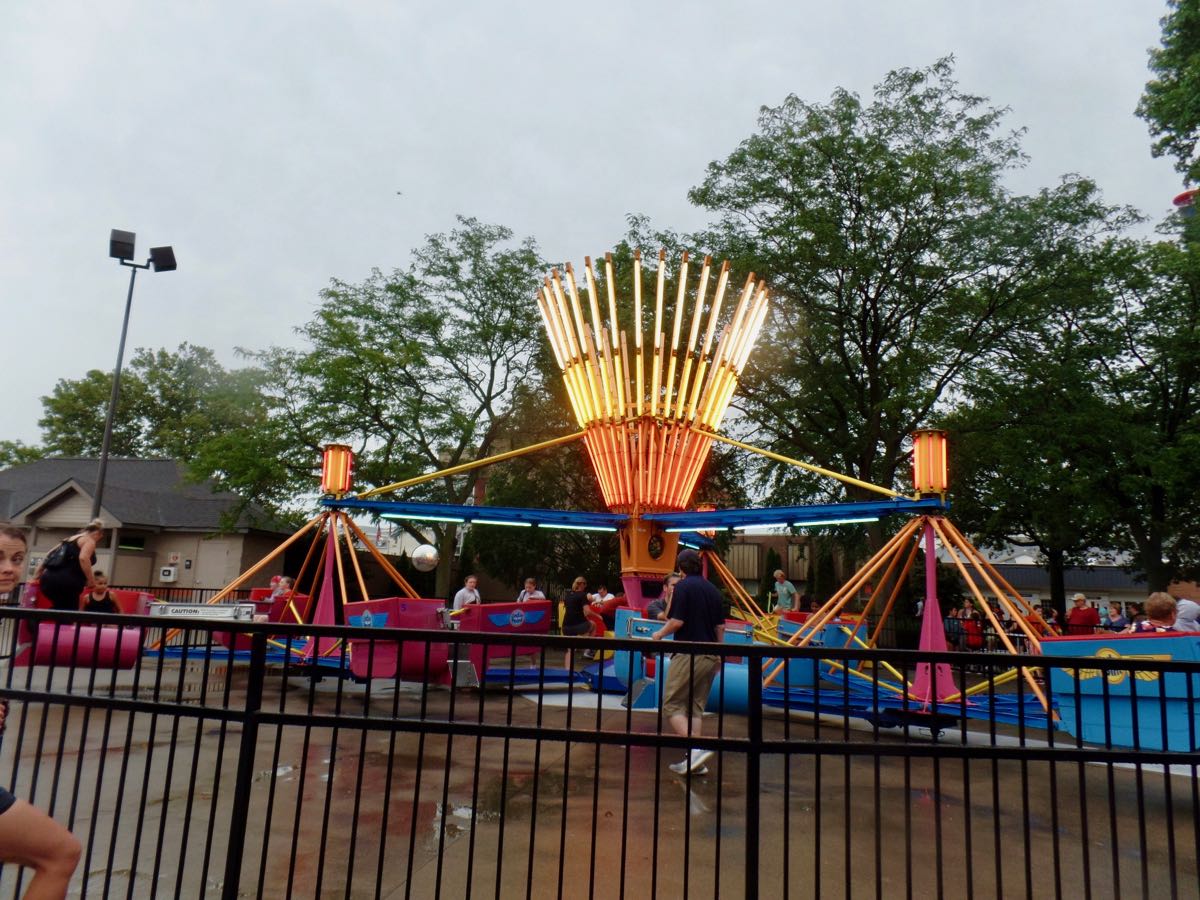 Scrambler getting going for the post-storm day! Actually taken after we had our ride, the first of the reopening park, but you get some sense of just how wet the seats were from this. 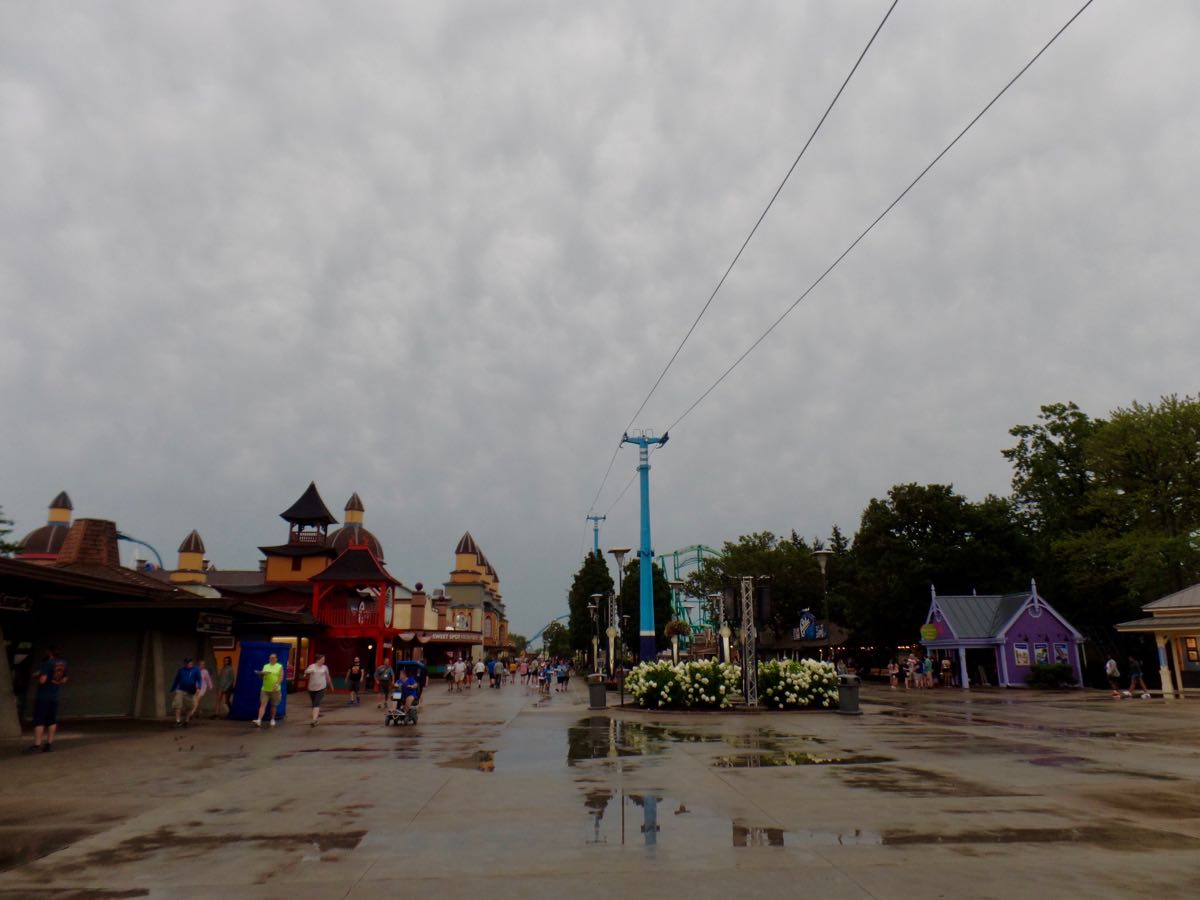 The main midway, looking toward the front of the park. Wet, wet, wet. 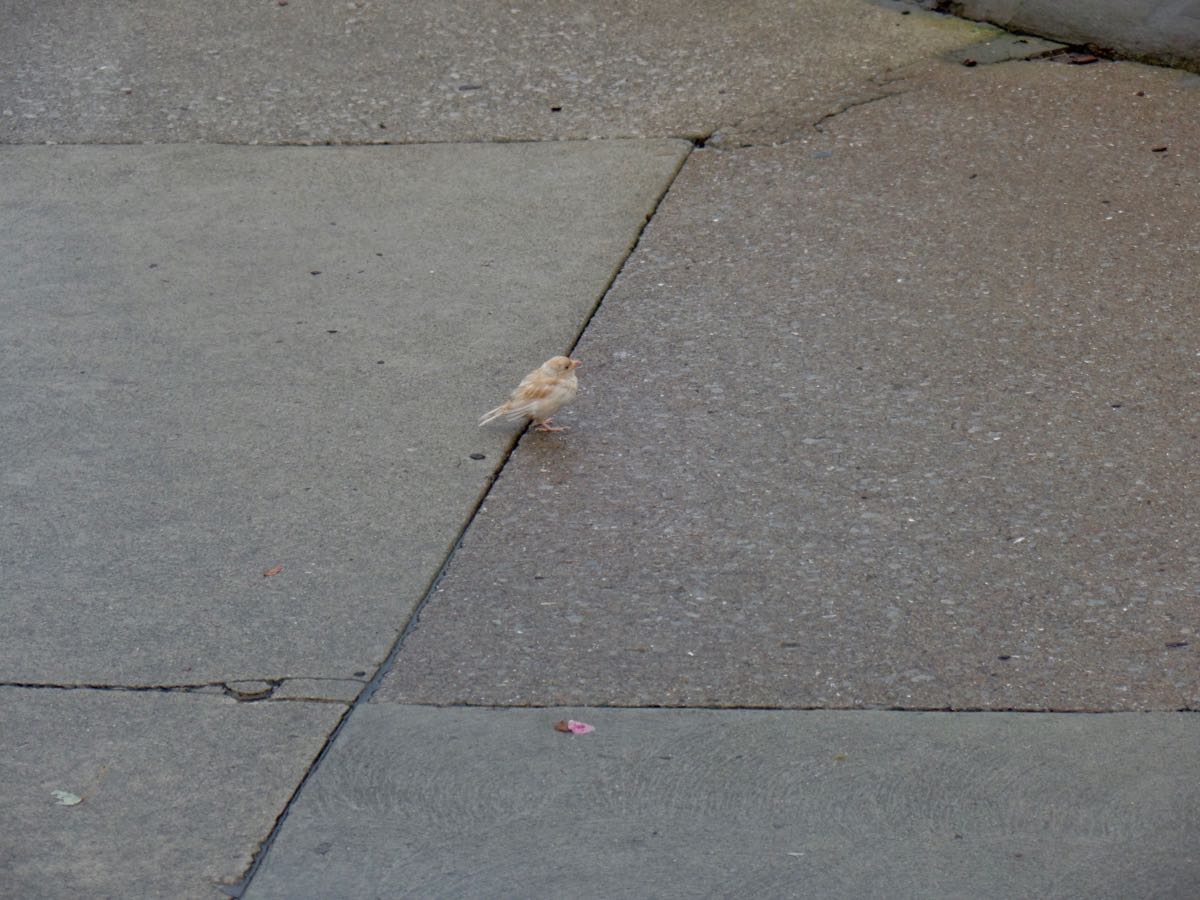 Well hello there! What's a sparrow doing being blonde? 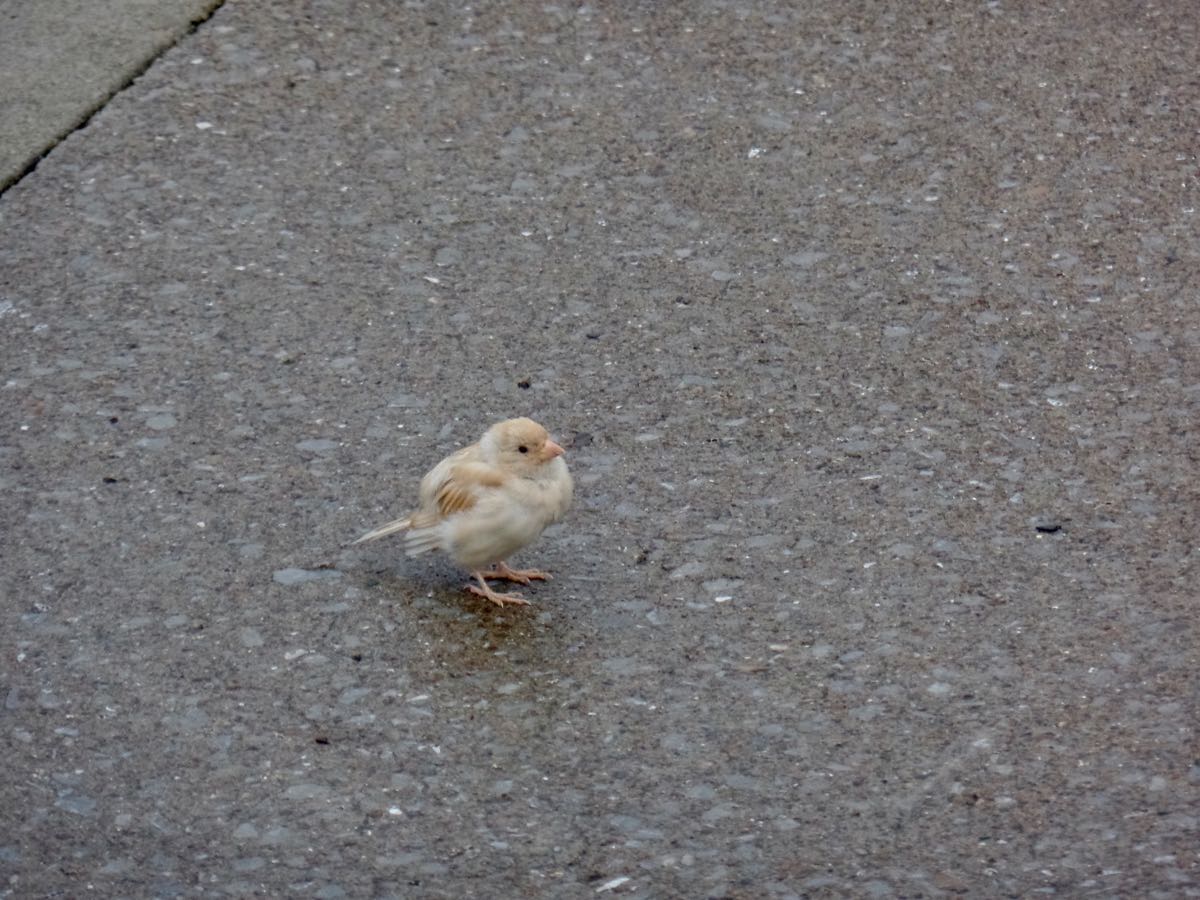 That's got to be a very light sparrow, right? If not what kind of bird is it? 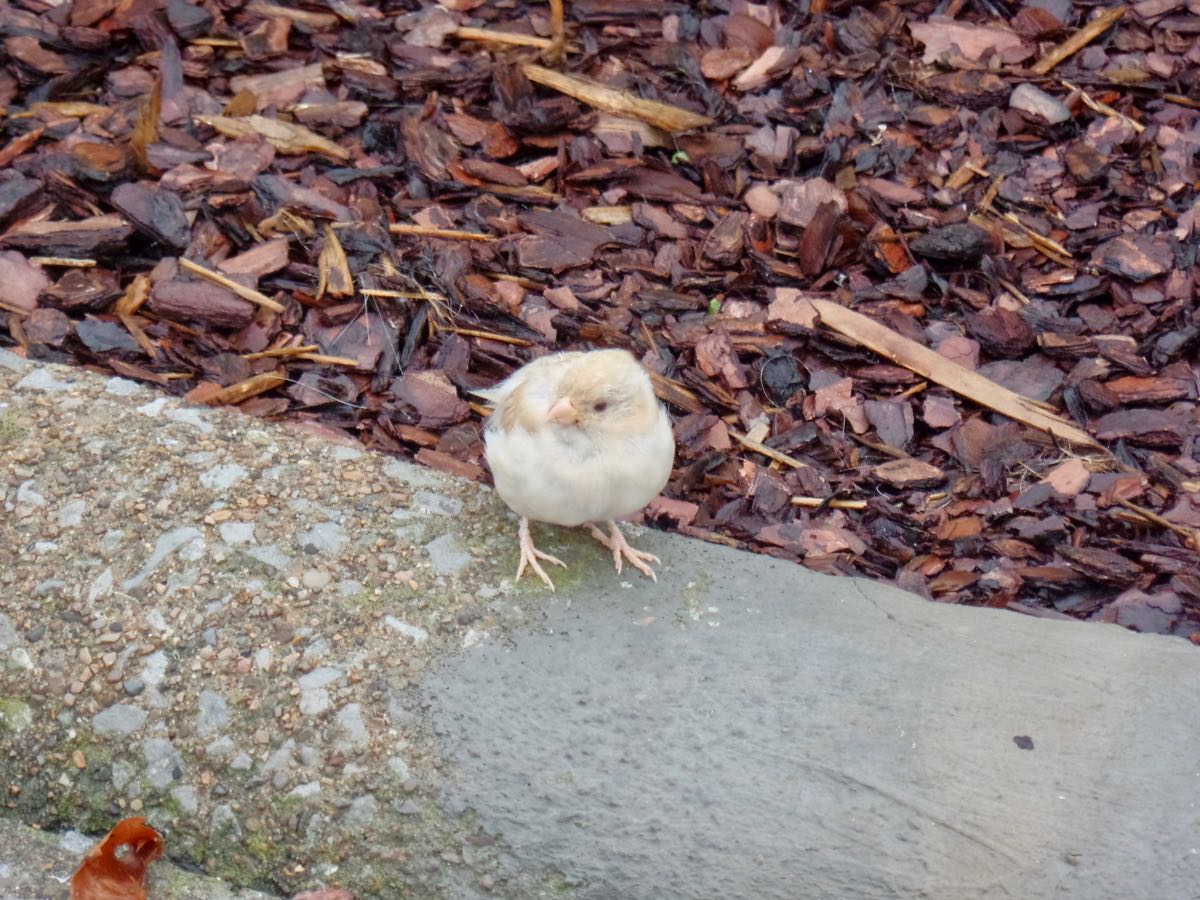 We spent a while watching this bird, until they decided they'd had enough of being photographed and disappeared into some hedges.

Trivia: There are no reliable estimates to how much bismuth is available to mine. It is mostly produced as a byproduct of lead and copper smelting. Source: Nature's Building Blocks: An A-Z Guide to the Elements, John Emsley.