Oh gads but my father has been calling every day to check on me. I understand what he's doing, and why, and I appreciate that he loves me and worries for me and wants me to feel that love and encouragement. But, gads. I heal emotionally by curling up, alone, in a dark cave and hissing at passers-by, real and imagined. I feel myself crumbling into dust having a daily 35-minute chat about how I should talk with my little brother who has connections and prospects and knows how to network and all. Also hearing tales of what's going on with ever-more-distant cousins that my father sincerely believes I know anything about.

I warned we're planning to be out of the house all day Sunday so maybe a day without will break the habit of calling every single day. I don't want to tell my parents, of all people, to stop showing care and concern and support for me.

Here, enjoy the final stop of the celebration parade. 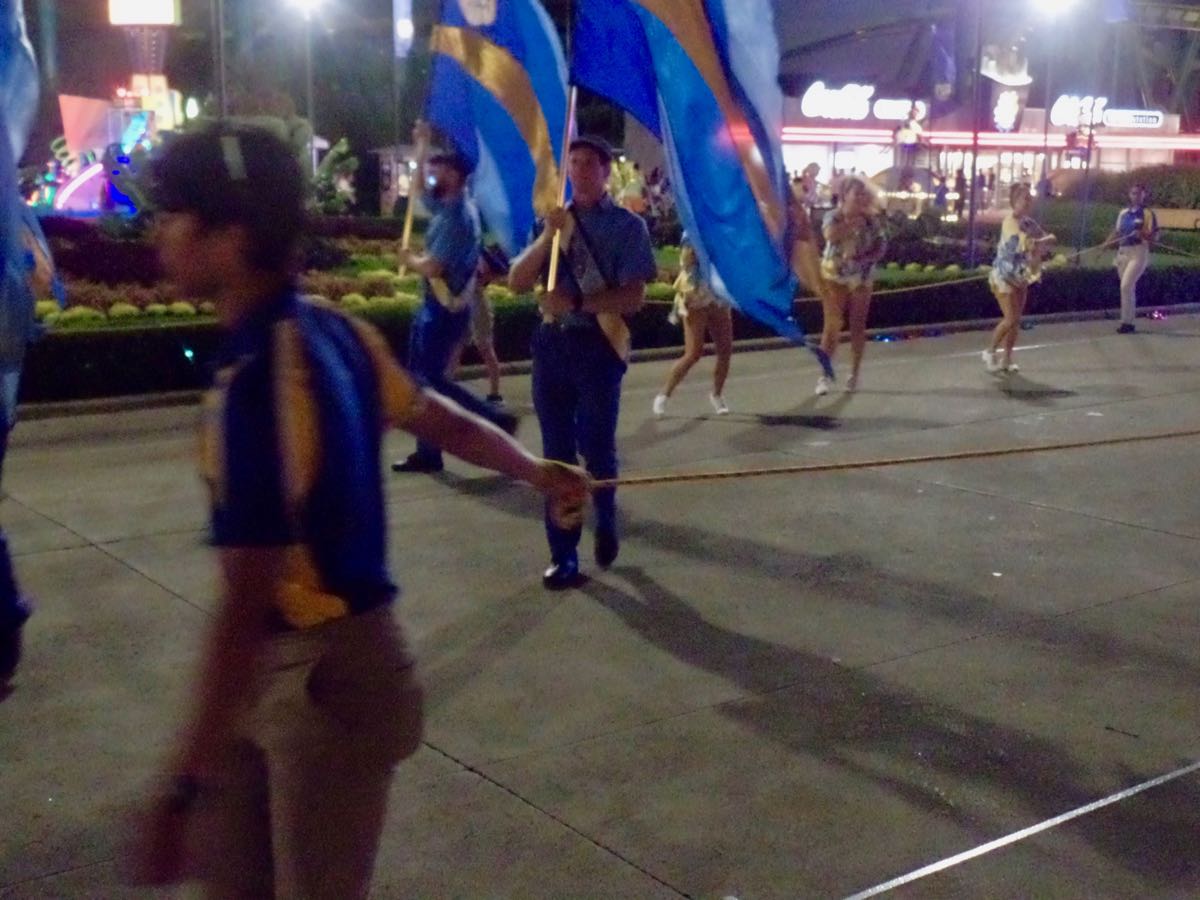 Ropes brought along the edge of the parade so the flag-twirlers and other performers have the space to do their work. 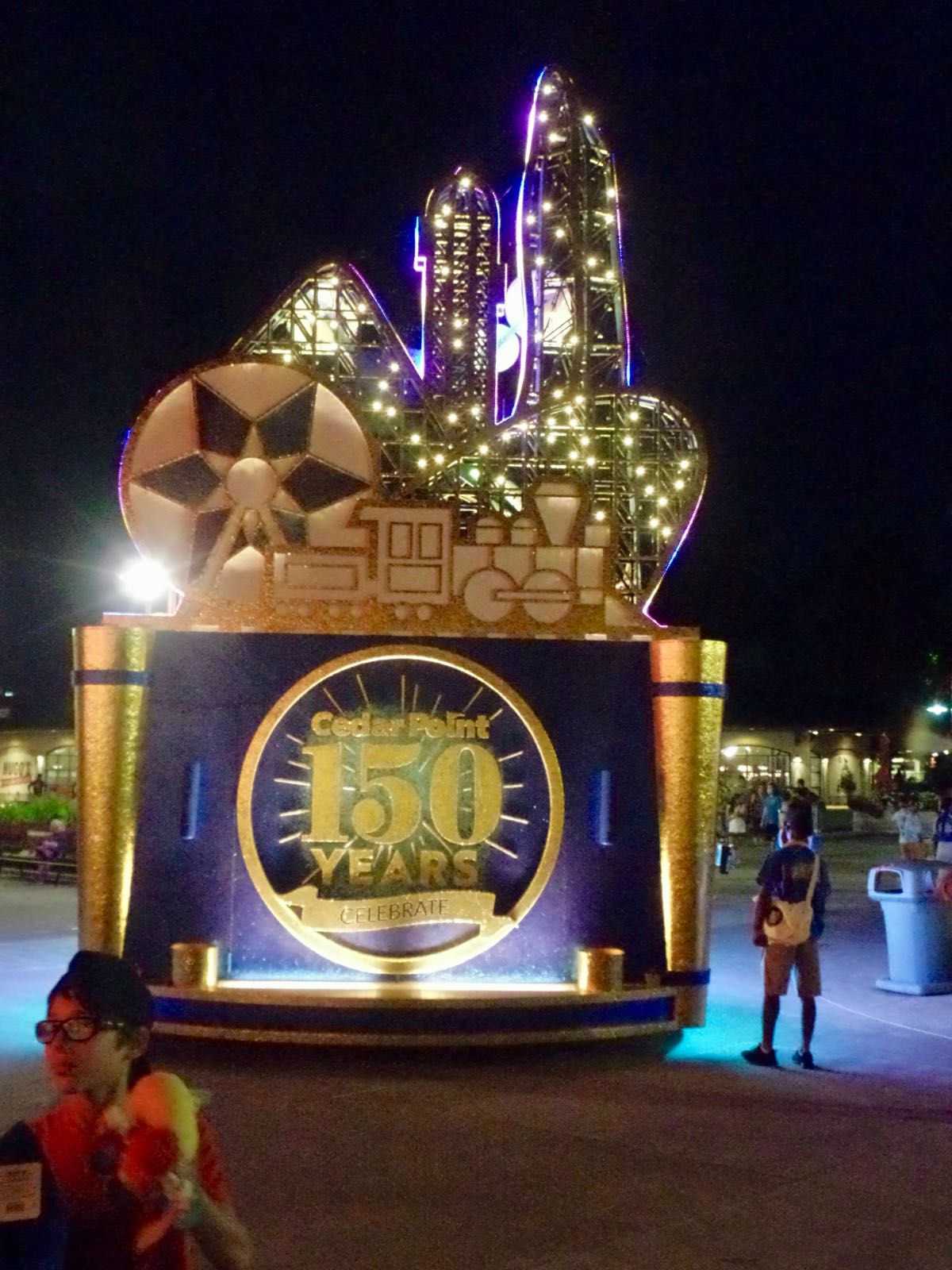 The back of the final float, with a good look at its retrofitting of the 70s-era park logo. 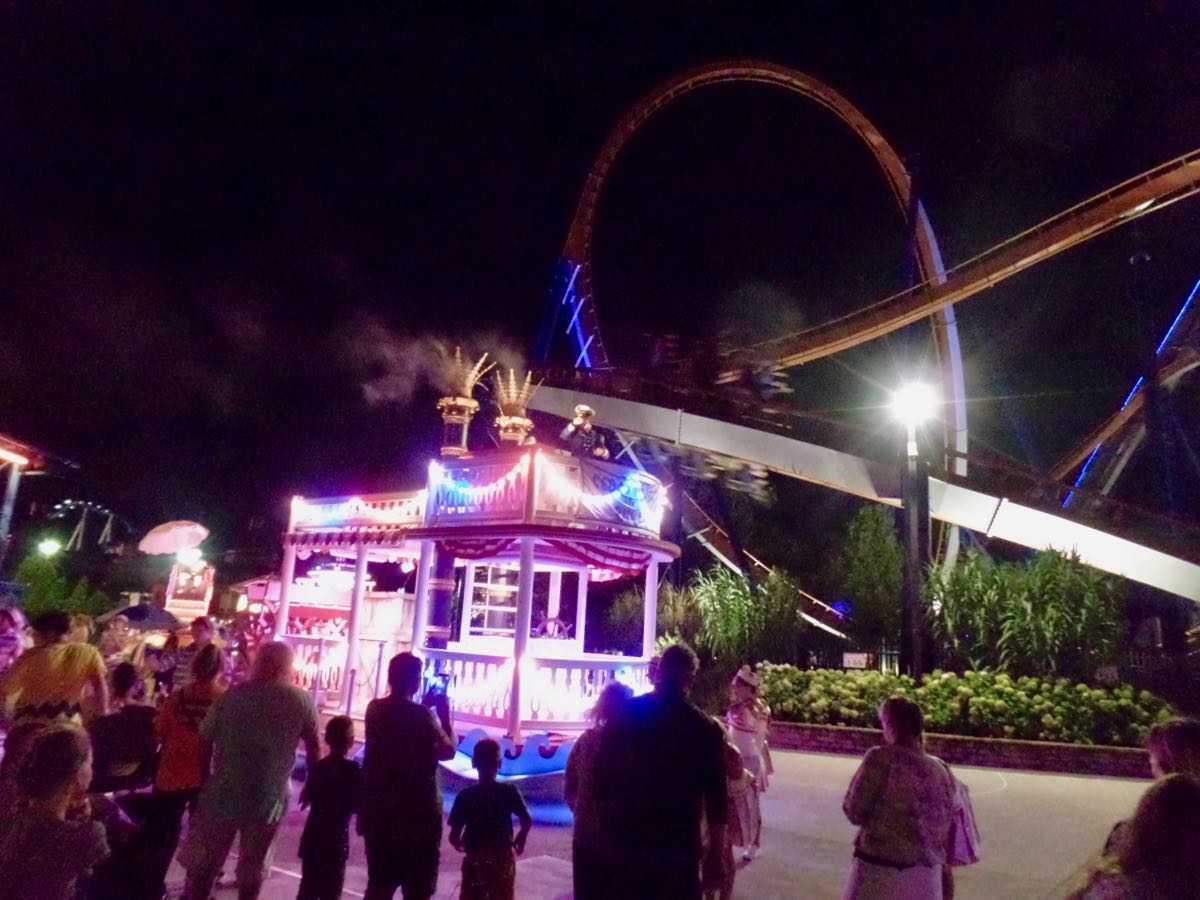 And now to the fourth parade stop, and getting one more look at the G A Boeckling float. 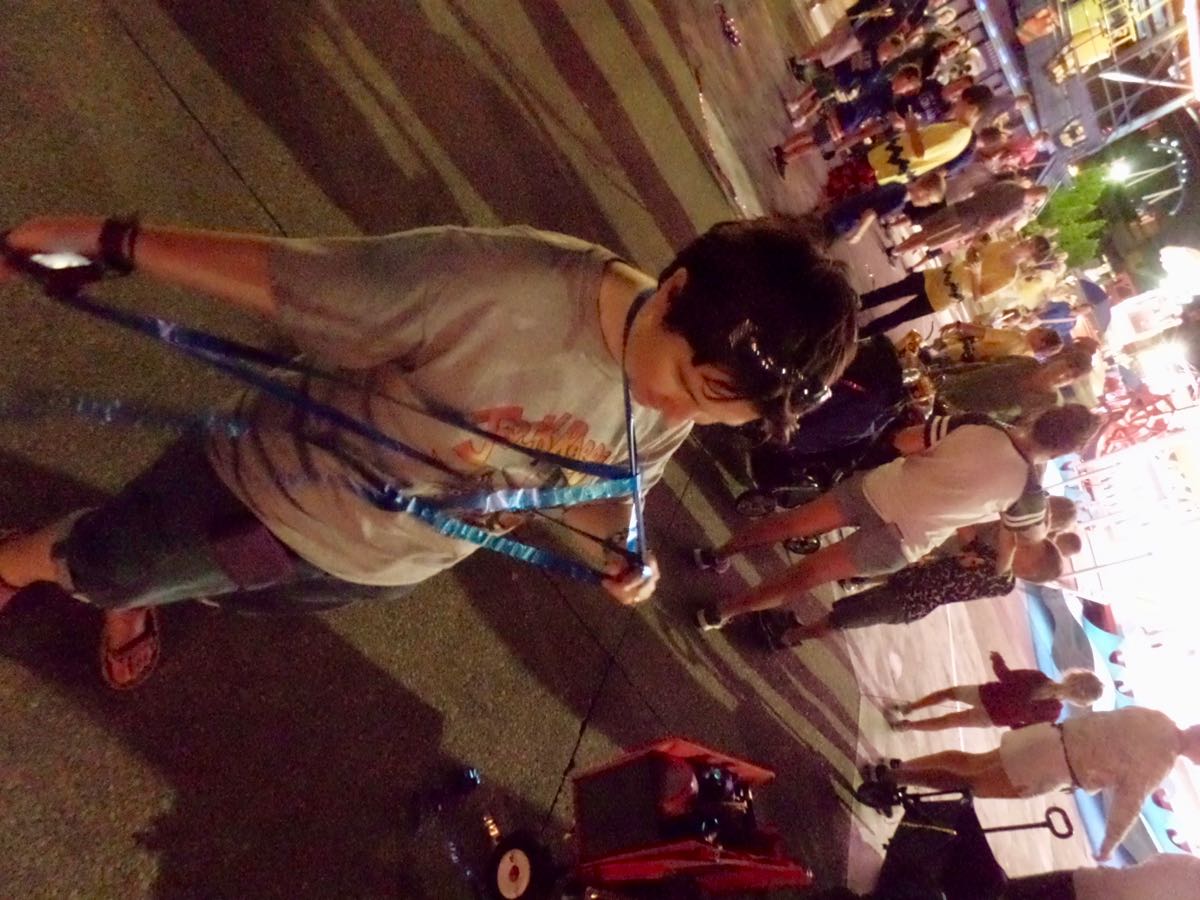 bunny_hugger wrestling with confetti that's gotten exploded around her. Note the family of Charlie Browns in the background. We'd been following them from the first parade stop. 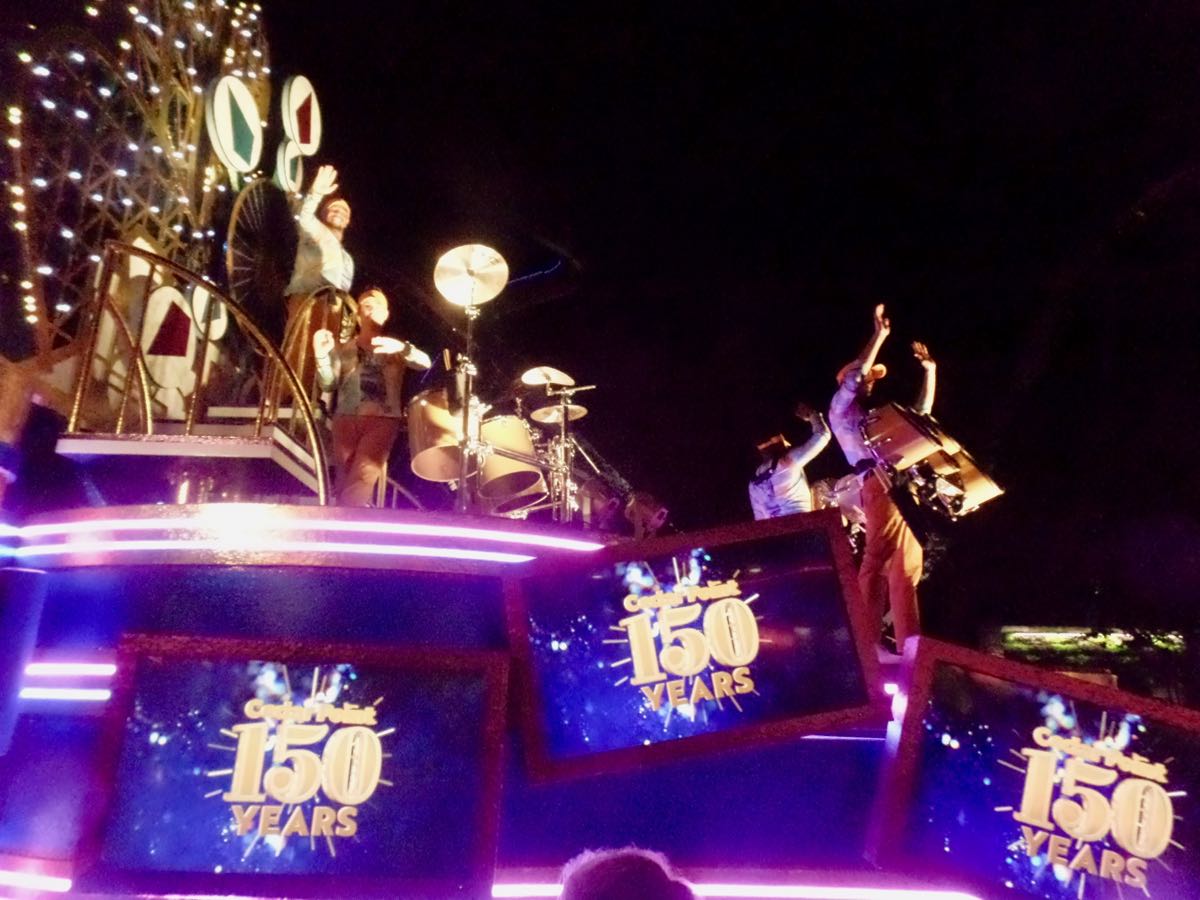 An orchestra of drummers played on the closing float; here's a look at some of them. 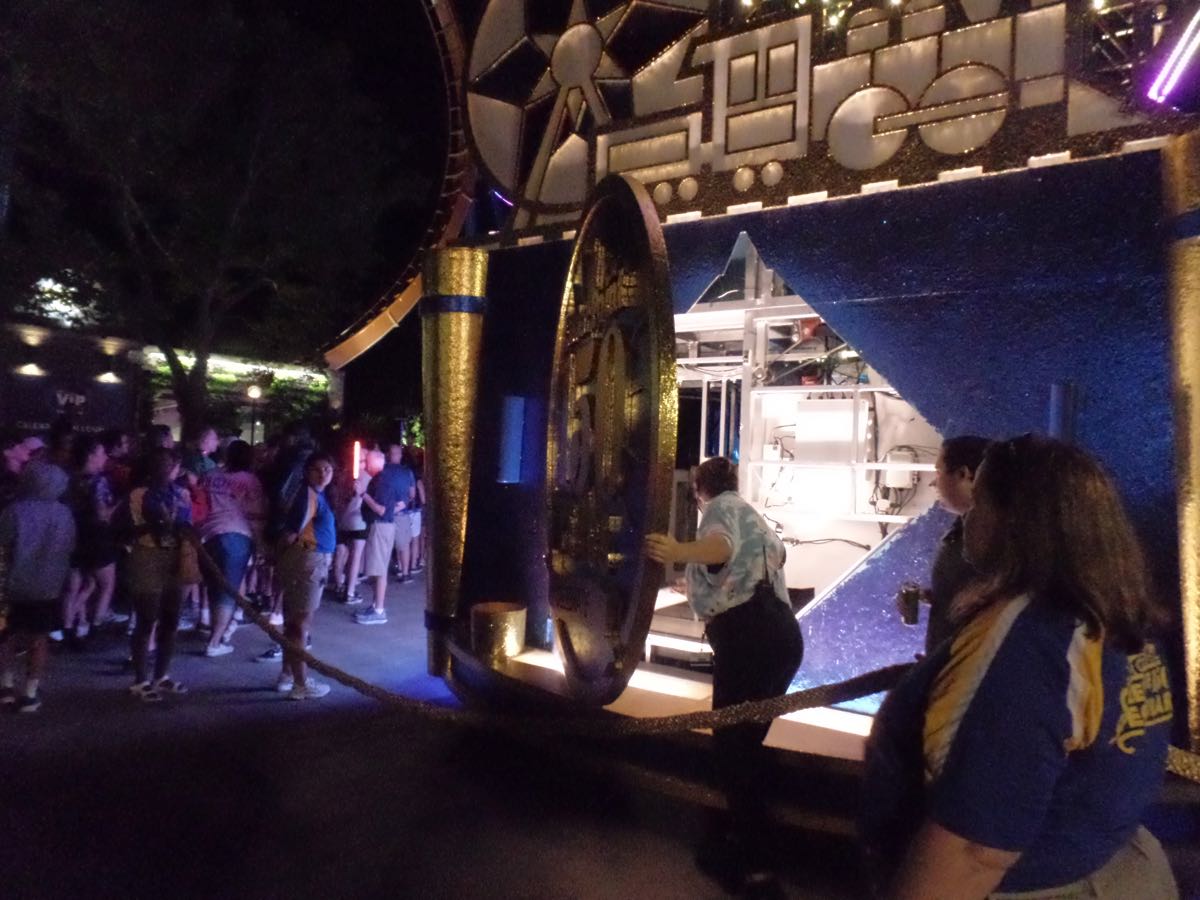 I spotted them briefly opening the back of that final float, and took a picture.

bunny_hugger, who missed it, asked what I saw back there and, trying to summarize this, I said: ``... Nothing.'' ... I mean, how would you describe that? It's just parts.

Trivia: Through the 17th century (Western European) women's shoes were often less decorated or fashionable than men's, as women's shoes were likely to be concealed under long skirts. Source: The Essence of Style: How the French invented High Fashion, Fine Food, Chic Cafés, Style, Sophistication, and Glamour, Joan DeJean.

Currently Reading: Franchise: The Golden Arches in Black America, Marcia Chatelain. So apparently Black patrons, surveyed in the late 70s, judged the Filet-O-Fish to be ``overwhelmingly white in its sensibilities'', which, mm. Whatever fish in 1978 was cheap enough to harvest to be sold as ``cod'', lightly battered and fried, smeared with tartar sauce and served on the world's driest bun? I can see it. One focus group, asked for some reason to say what celebrities the Filet-O-Fish most aligned with, came up with comedian Paul Lynde, sitcom star Mary Tyler Moore, and genocide author Henry Kissinger. I also like the half-page of things McDonald's consultants tested out to figure why Onion Nuggets weren't selling before finally concluding that they just didn't taste very good.