OK, trying to get out of the scramble of life again. Oh, early September, that's something. For our inaugural journey in my new car, we took Labor Day to go to Michigan's Adventure. We try always to get there for Closing Weekend and they weren't having the post-Labor-Day weekend this year. It threatened to be packed, as the weather was --- as it reliably is --- gorgeous, barely a cloud in the sky, and warm. And the water park was open, which the post-Labor-Day weekend usually doesn't see. The park was closing early, at 6 pm, as they have all year, which spoiled our chance to have a short while of evening riding time. In a normal year they'd be open to 7 or 8 pm and allow a glimpse of darkness at a park not set up for evening visitors. Still, it was less crowded than we feared and we got a good bit of riding time in, in fact.

The greatest disappointment is that Zach's Zoomer, the junior wooden roller coaster, was closed. Since it was closed every time we looked the other visit, this means we went the year without riding it. The next disappointment is that the kettle corn stand was closed, depriving us of that and also of something we could eat that was vegetarian. We'd end up getting a pizza from the place just outside the waterpark and eat until a yellow jacket took an interest in our remaining Coke Zero.

The greatest mystery is in

bunny_hugger's eyes. She set a contact lens in one eye and it just vanished. Not onto her lens, as she couldn't see any better from it. But not anywhere else, either. Couldn't find it in her eye, couldn't find it on her finger, couldn't find it dropped into the car seat or anything. It somehow just vanished. She was ready for it to start irritating her eyes, or worse, all day, and the days ahead, but nothing seems to have come of it. Fortunately she brought backup lenses, so she could put that in and go out and see things in the park. But it's still weird that a contact lens should turn into vapor like that.

The first thing we went to was the Mad Mouse, which had an impossibly long line our previous visit. It was doing better this time, 'only' a 45-minute wait. That's a mix of the ride's low capacity and that for some reason they were running one train at a time on a ride designed to have, like, four, maybe five going at once. I don't know why not. Every park, I hear, has had lousy operations this year. But I also wonder if they're just not trusting brakes on roller coasters, not since the accident on Shivering Timbers earlier this year when they somehow released the brakes on one train and it collided with, and derailed, the other. (In the station, at not more than about 15 miles per hour, but still, something that should be so hard to have happen at all.)

Foiling that hypothesis, though, is our ride on Thunderhawk, their big steel coaster imported from the closed Geauga Lake outside Cleveland. And that was running two trains at once, and maybe part of why the ride had no queue at all. Also that it --- like Mad Mouse --- was a better ride than we'd remembered. Maybe they had given some maintenance along with the new track colors. Maybe our long time without going to parks lets this all feel fresher again.

We did ride Woodstock Express, formerly Big Dipper, in its much better location near the north end of Zach's Zoomer and in the midst of the new Camp Snoopy location. We were surprised there wasn't more of a line; apparently, all the kids were busy in the water park. It's a fair enough ride, your basic kiddie powered coaster, giving us at least sort-of a new ride credit. It was less of a punishment on my knees than I expected. Not sure if that's because they were able to smooth out the ride when they took the coaster apart, or if it's because we were prepared for the rougher class of kiddie rides we'd see at, like, a small park.

So despite the long --- but smoothly-moving --- line for Mad Mouse, and the difficulty finding vegetarian food, it was looking to be a pleasant, low-key day, the sort of comfortable thing with plenty of riding that we hope for. Neither of us could suspect what would happen when we tried to ride Shivering Timbers ... 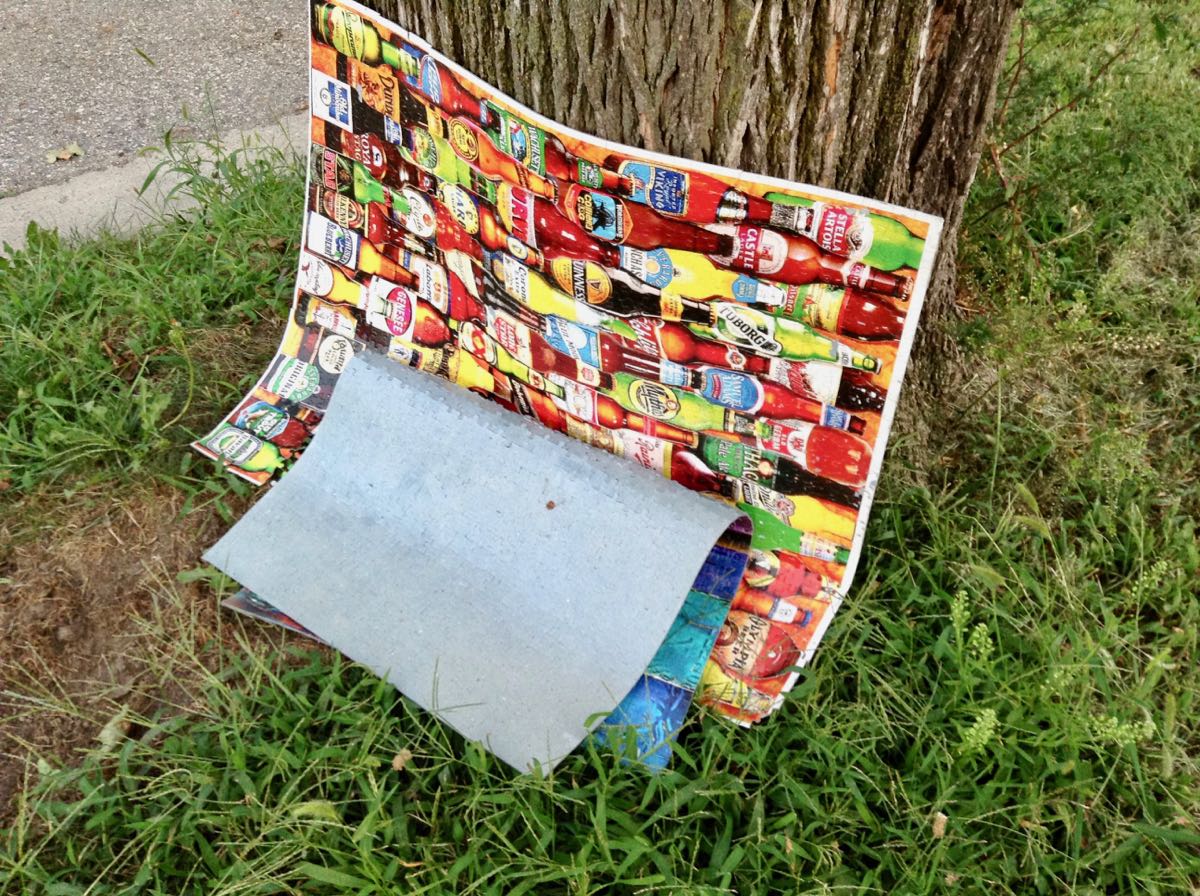 Two complete jigsaw puzzles that someone just left out on the extension, waiting to be taken or trashed. Also this underscores just how well the games will hold together, given the chance. 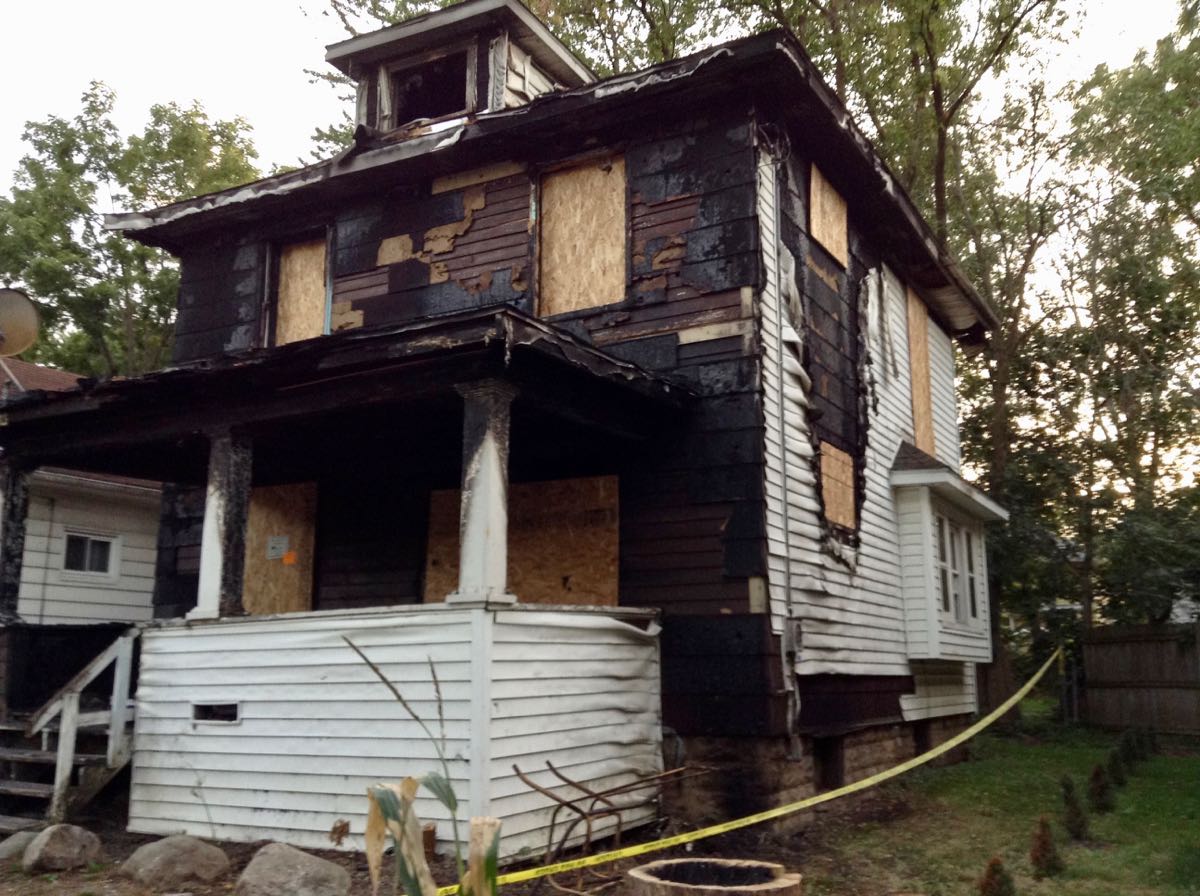 House up the block destroyed by a fire. There've been three house-destroying fires in our vicinity in the past year. 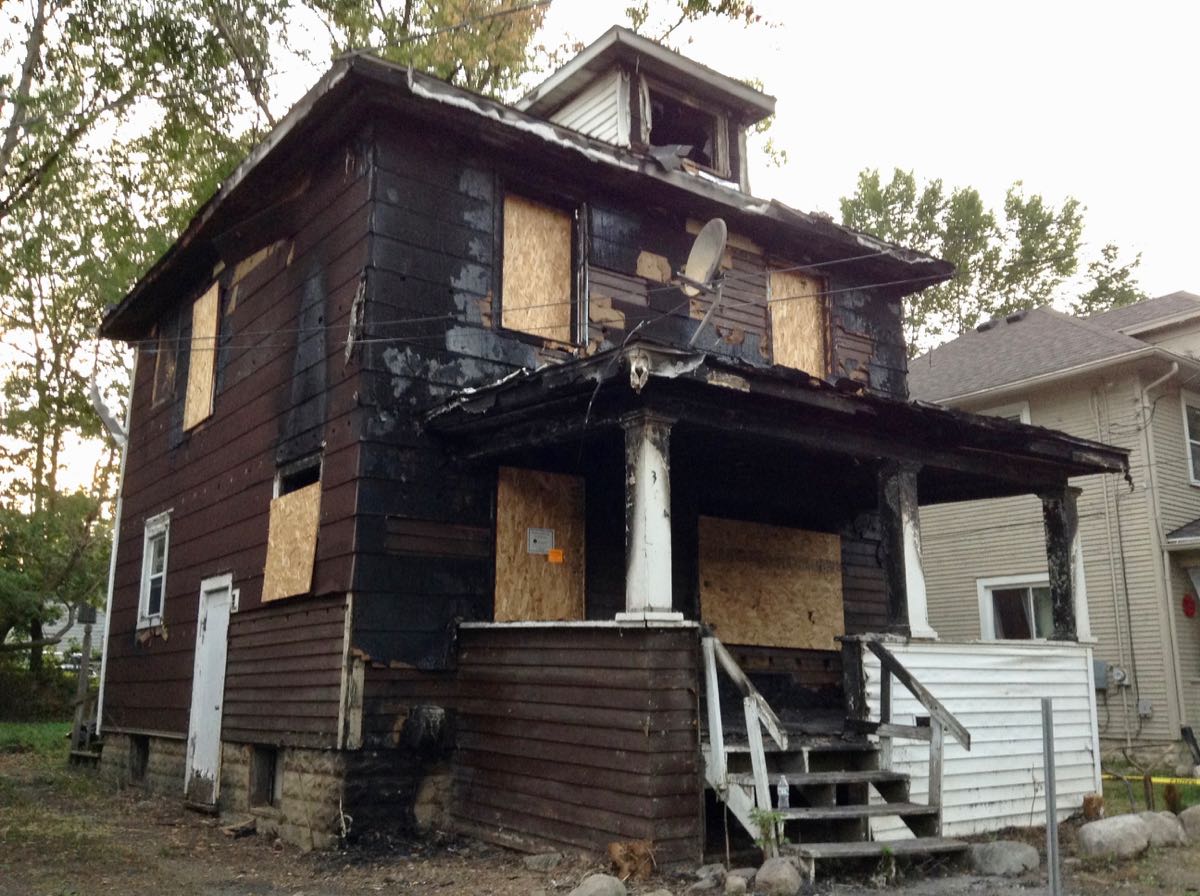 I haven't seen a demolition tag on the house yet, so maybe there's some hope for this century-old building, but I have to say it doesn't look good. 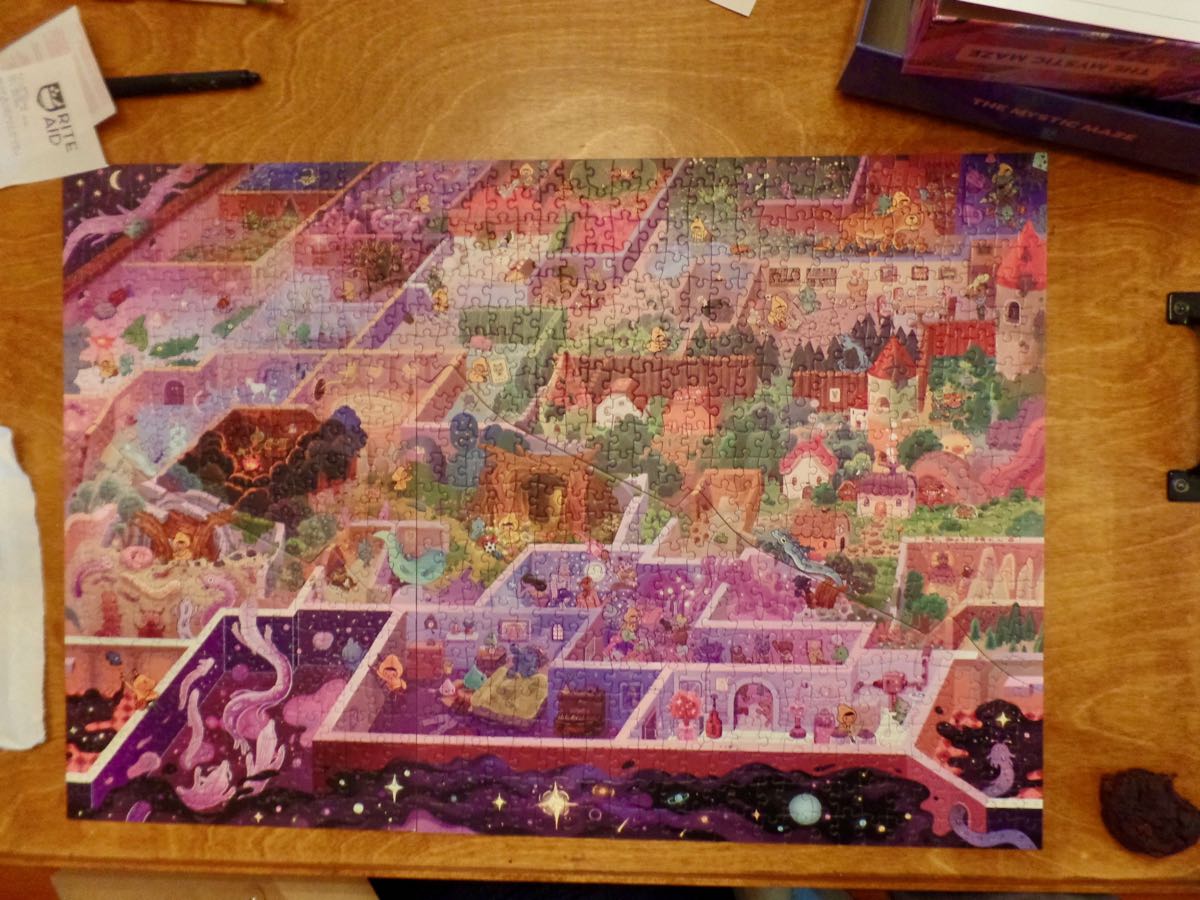 The jigsaw puzzle that

bunny_hugger and that turned out to be a great deal of fun. After this was completed there was a second stage, opening a new envelope and altering the RPG-like landscape here. I've got photos of that too but will avoid posting for fear of spoilers. 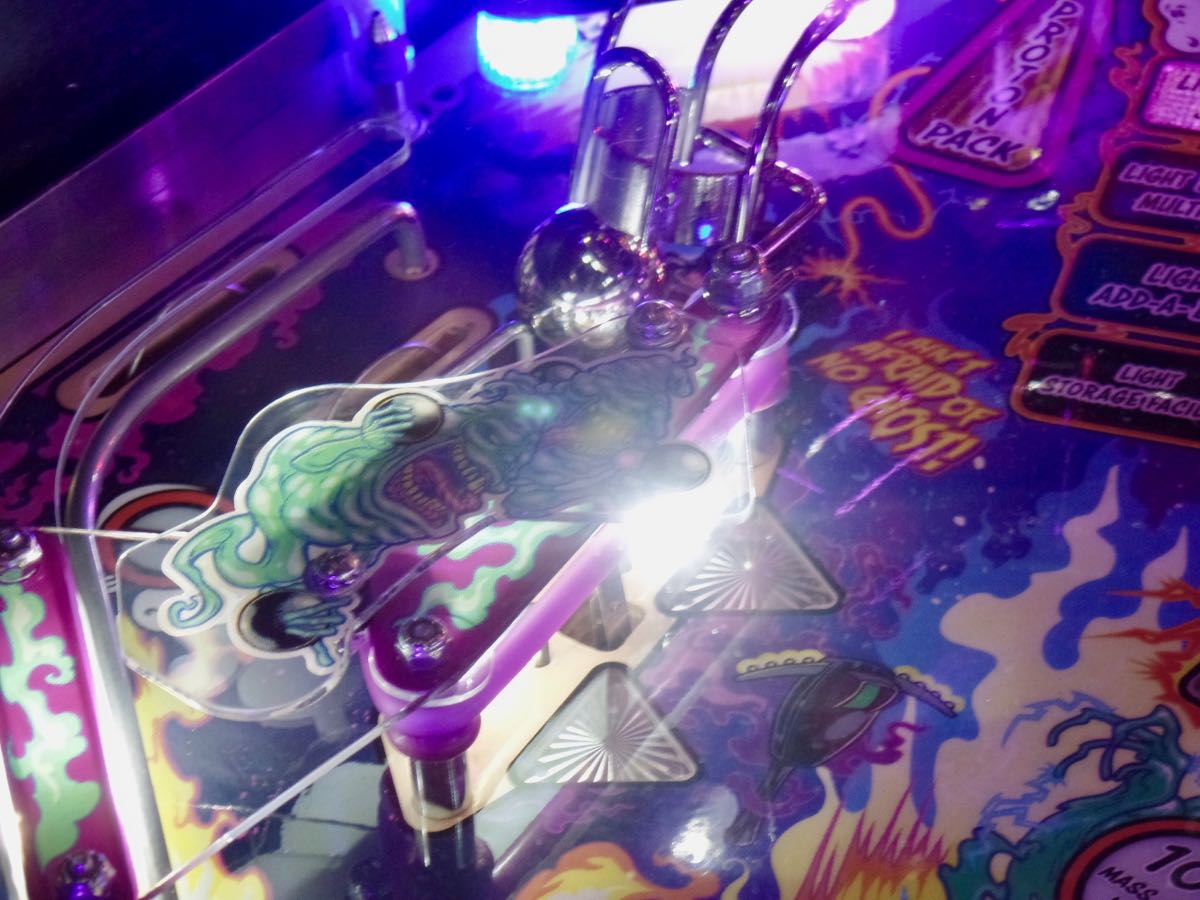 A freak event from pinball league night: a ball lands on top of the table covering a kicker. This is best handled by getting someone with a key to the game to take the glass off, but you might be able to lift the game up slowly enough and tip it backwards without tilting, maybe. 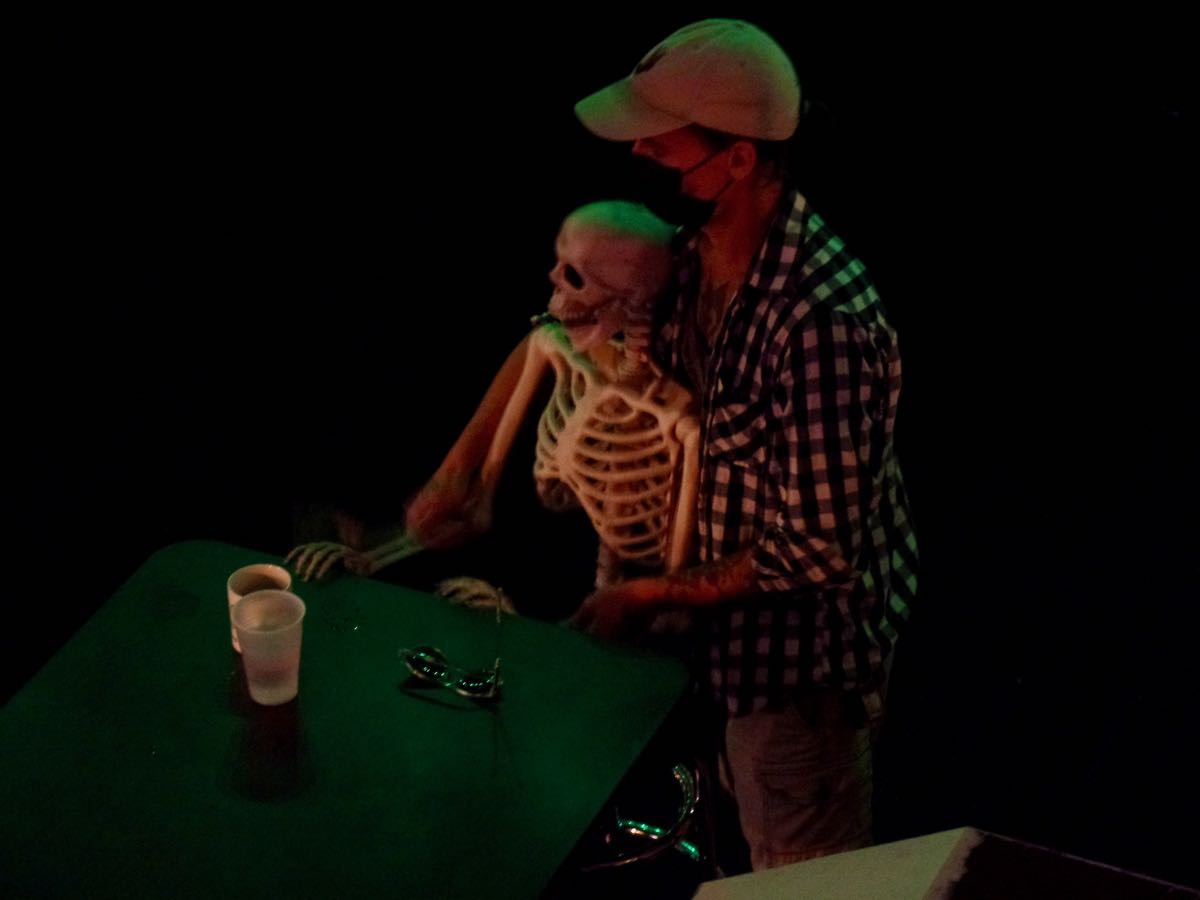 Not a participant at league but someone happily masked was messing around with a partial skeleton that the bar had because of the reasons.

Trivia: In 1901, at the beginning of assembly-line production of the curved-dash Oldsmobile, there were 7,000 passenger cars worth a total of $8,000,000 made in the United States. Source: Wondrous Contrivances: Technology at the Threshold, Merritt Ierley.