What about the boy?

I knew that sending in those documents to Copart last week wouldn't really fix things. They sent me a fresh bundle today. You might dimly remember --- I certainly dimly remembered --- that when I bought the Scion, my mother co-signed, ensuring me a better interest rate. My mother didn't even remember that. So she has to sign a power of attorney allowing Copart to get a new title. They sent this to me, when if they'd asked, I could have told them where she lives. So I called, and told them, and now they have the modest but actual waste of overnighting documents to her.

And Toyota Financial Services continues to be unbearable. Their phone queue is never less than an hour. They claim they'll call you back when they have an operator available, which is a lie. They have a Twitter which they don't answer. The local Toyota dealership insisted they can't help as they have no contacts with Toyota Financial that everyone else doesn't have. This has to be a lie, but good luck getting them to act on that fact. I called Copart to explain this and they admitted yeah, some companies are hard to reach. They tried to find if they had any ins, and they couldn't find anything except a physical mail address. So, I sent a Priority Mail envelope to them with a letter directing them to send me a duplicate of the lien release, and hey, if you could send one to Copart too that'd be great. This won't work but at some point everyone has to agree I've done my part.

bunny_hugger's insurance, who (fairly, for them) refused, so they sent me a bill for the whole amount. So I need to explain to them that they need to charge my now-former employer's insurance, and I can not imagine how awful this is going to be.

Enough of that. Let's have some pictures from Michigan's Adventure and our Closing Day trip a month ago now. 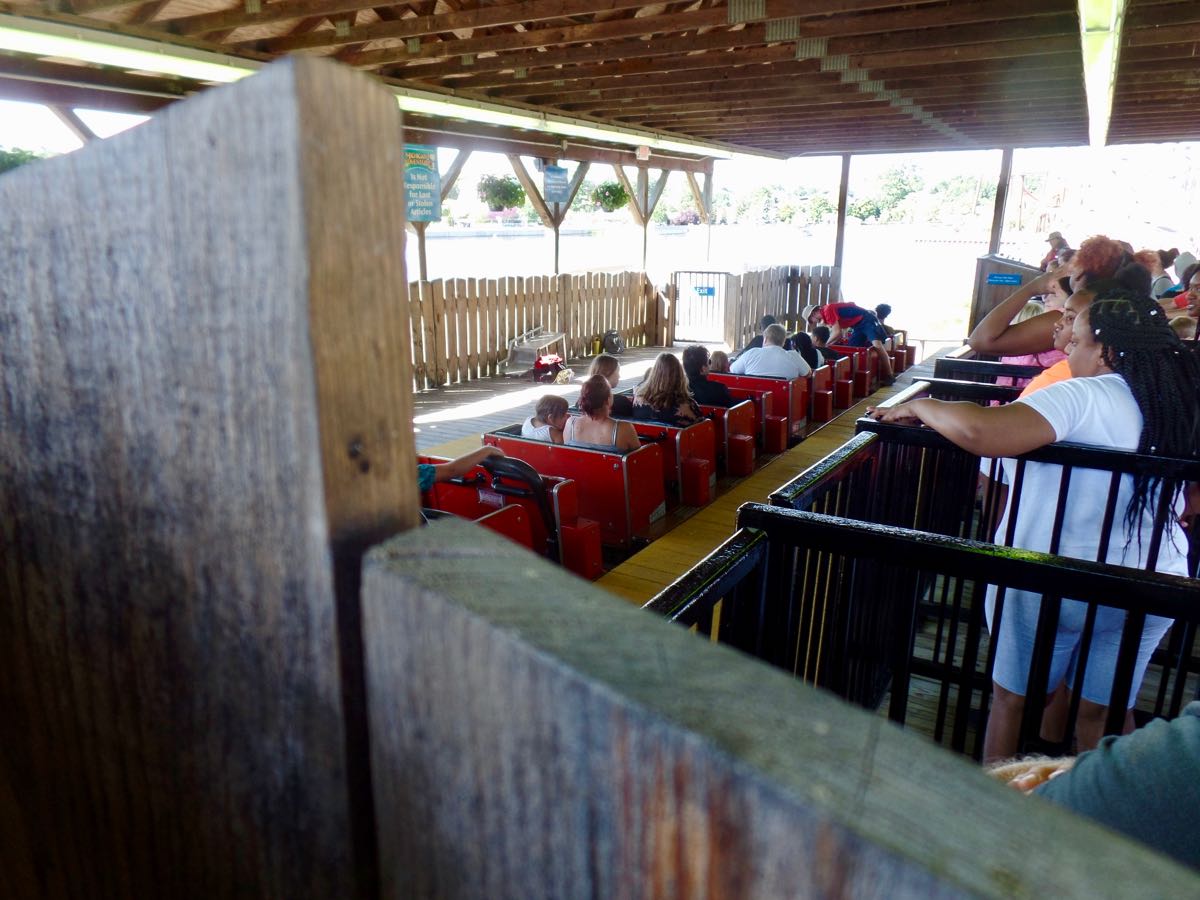 Wolverine Wildcat's launch station, from peering over the fence at the edge of the queue. I thought this picture would be like 25% more Art than it turned out, but here you go. 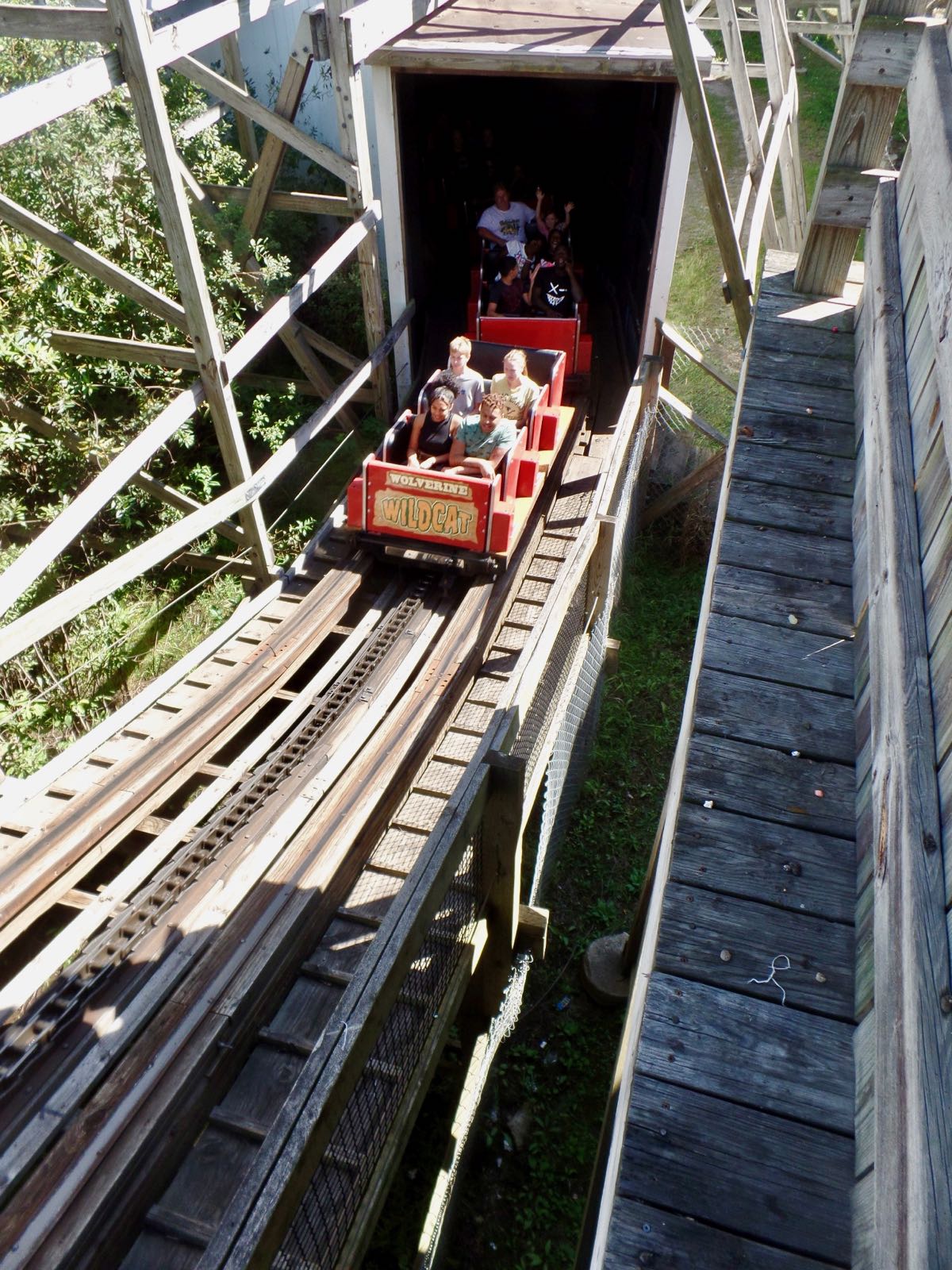 Wolverine Wildcat's train emerging from the tunnel into the lift hill. 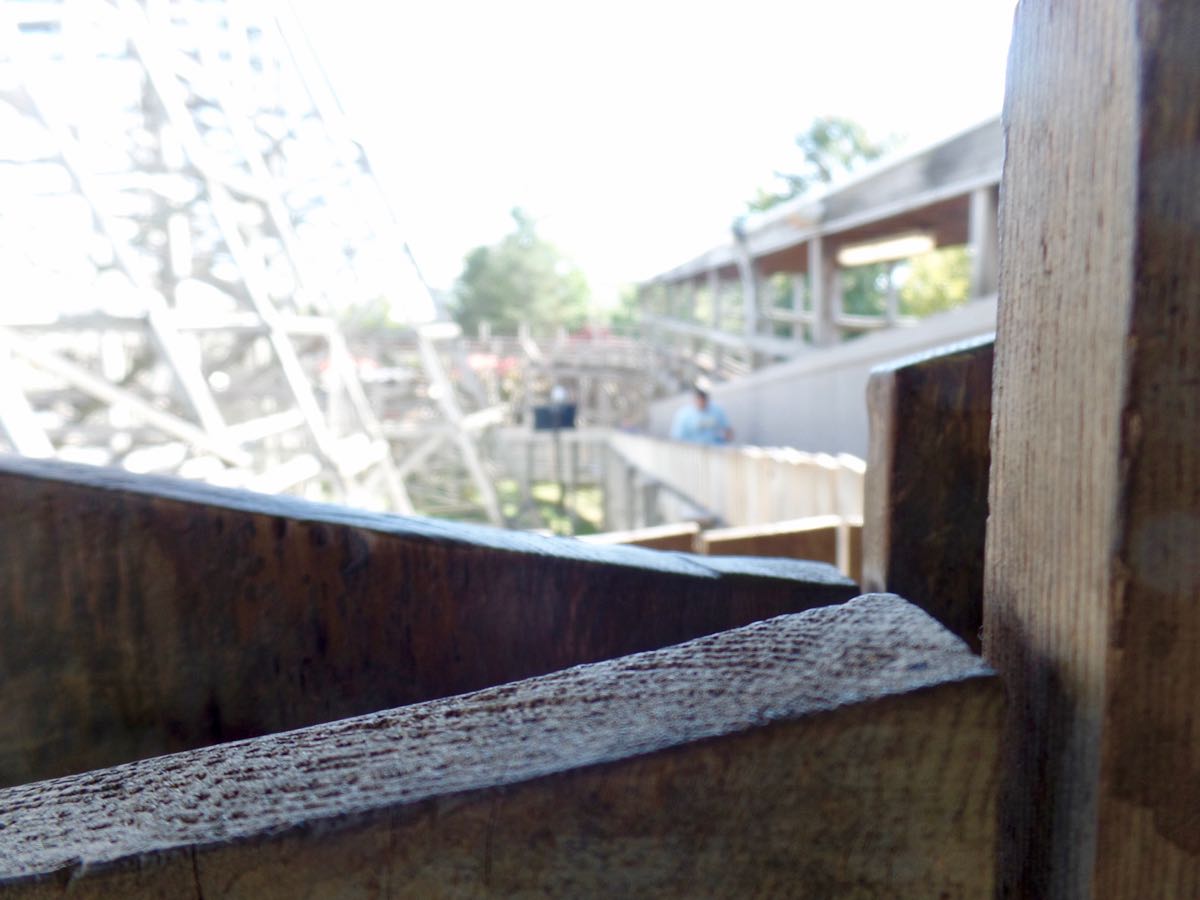 Wolverine Wildcat's queue, from peering over the fence at the edge of the launch station. Again, I thought this picture would be about 25% more Art than it turned out, but here you go. 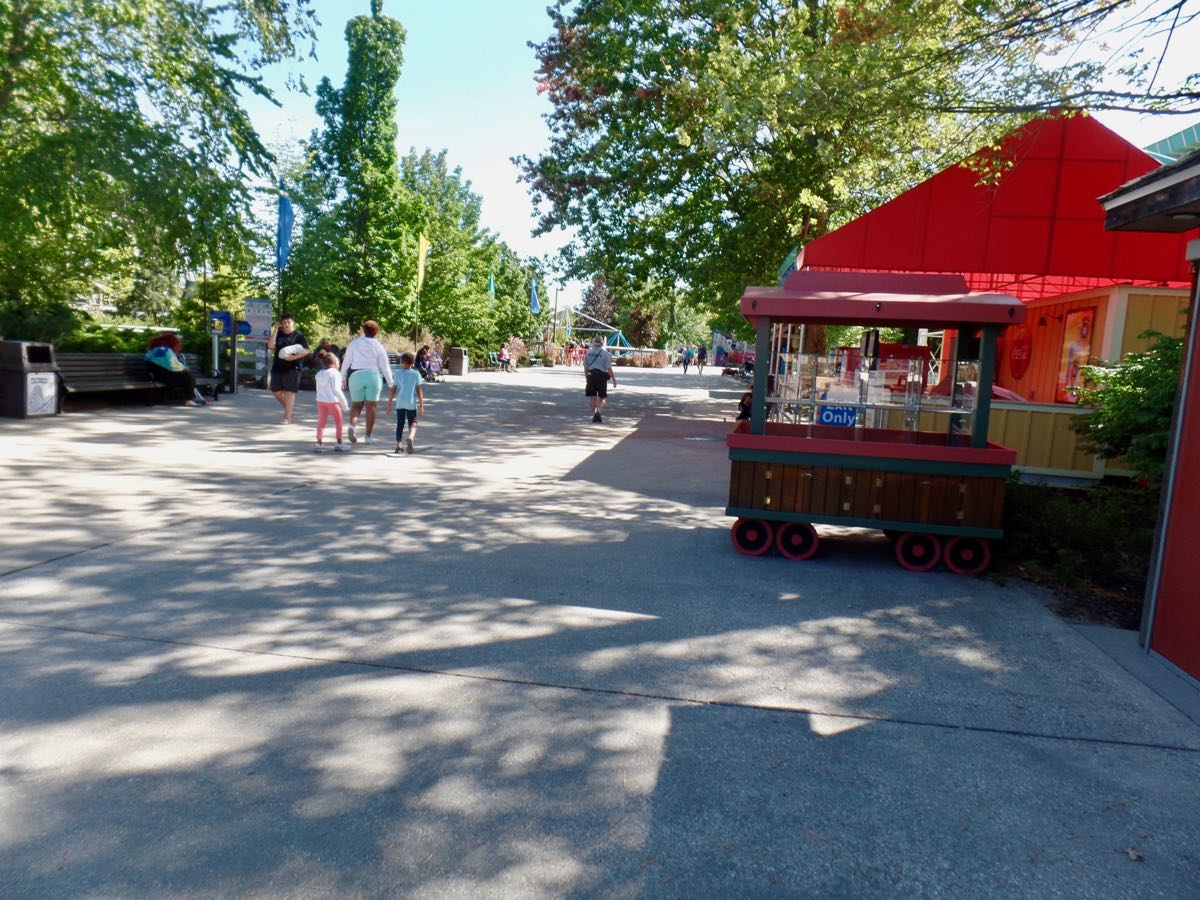 Bit of the midway leading to Shivering Timbers. This is noteworthy just because none of the little portable kiosks that normally sell small merchandise --- leather goods, bags of rocks to 'pan' for gold, that sort of thing --- were gone, as they were the other time we visited.

The entrance to Shivering Timbers, with its lift hill standing tall in the background. And see there's the sign saying this line, bad as it might look, isn't anywhere near 45 minutes. 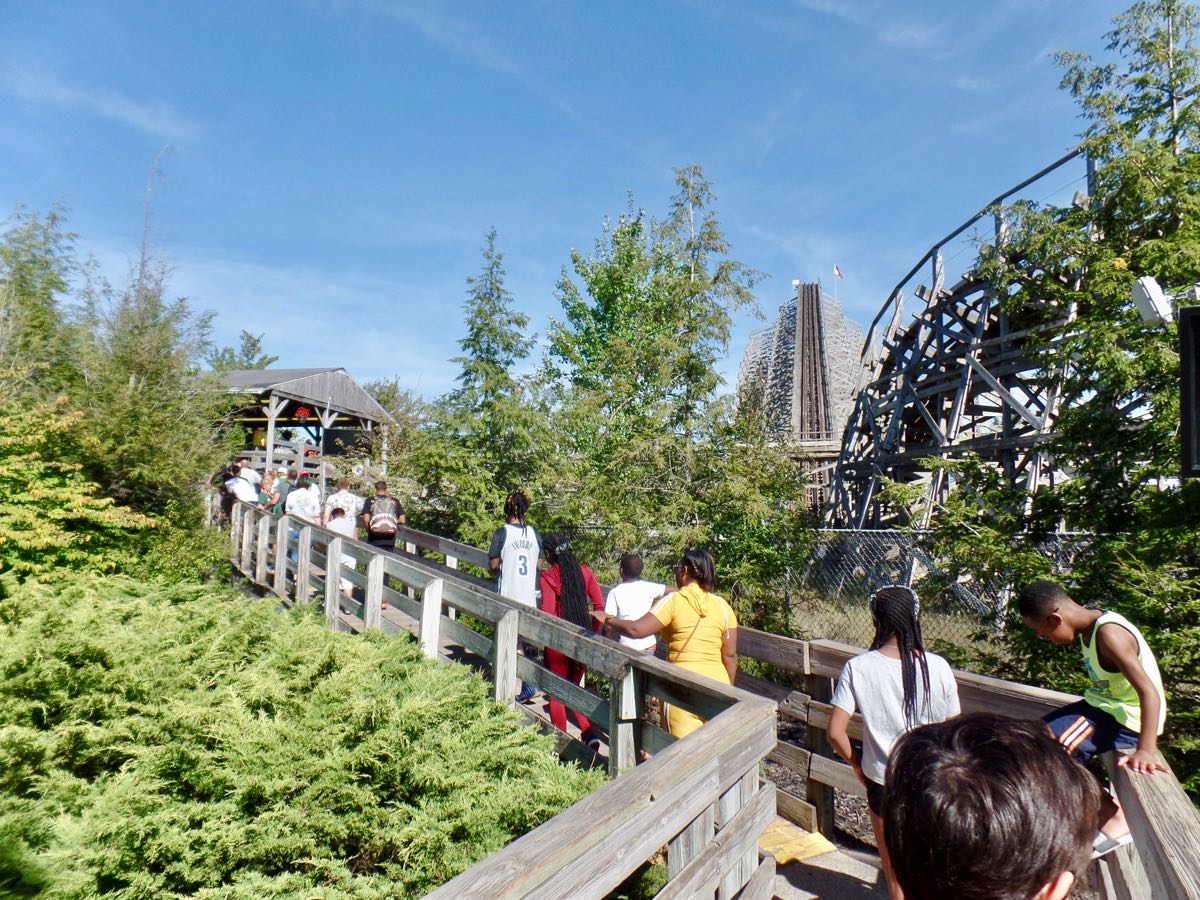 Here's where we joined the queue, at around the ``15 minute'' mark (really more like 30 minutes). The lift hill is in the background and doesn't that look good? 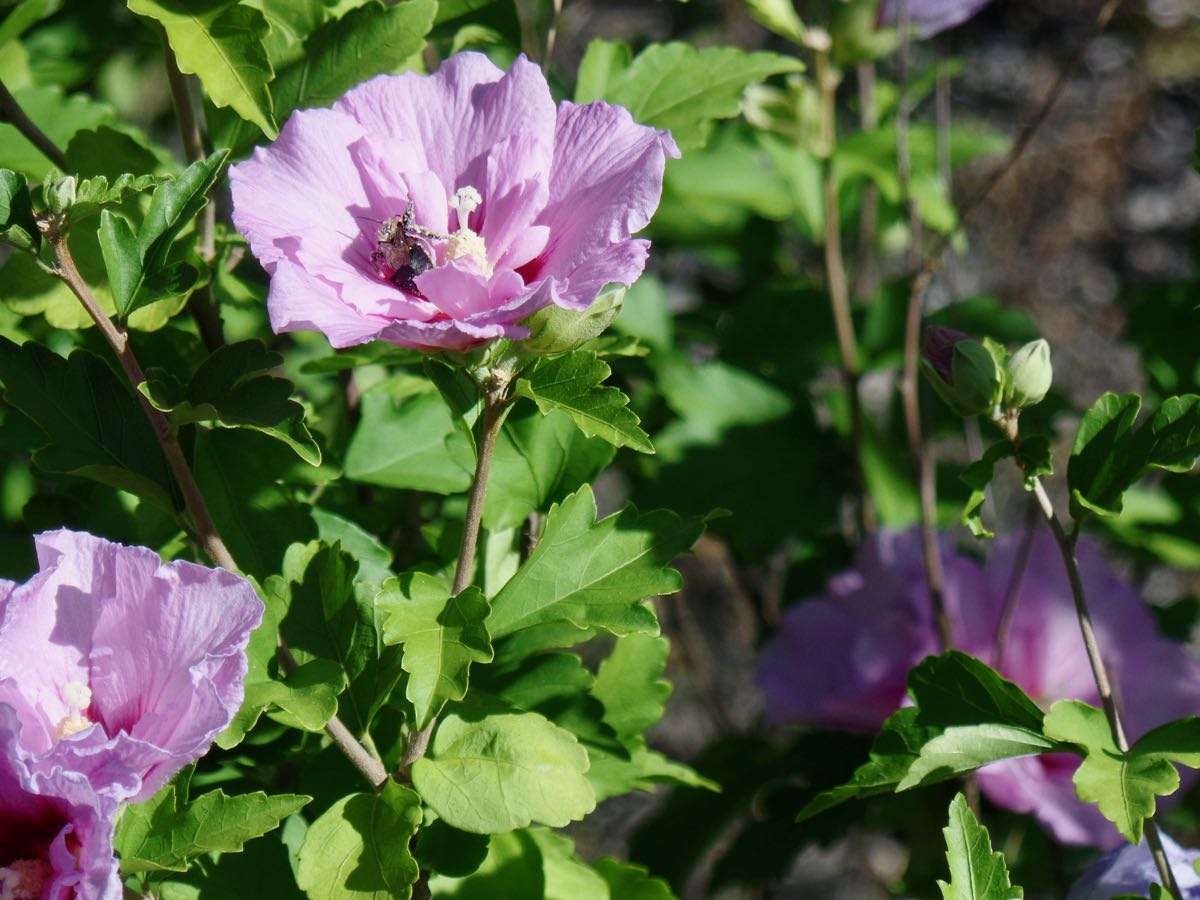 Bees bumbling around some of the flowers along Shivering Timbers's queue. 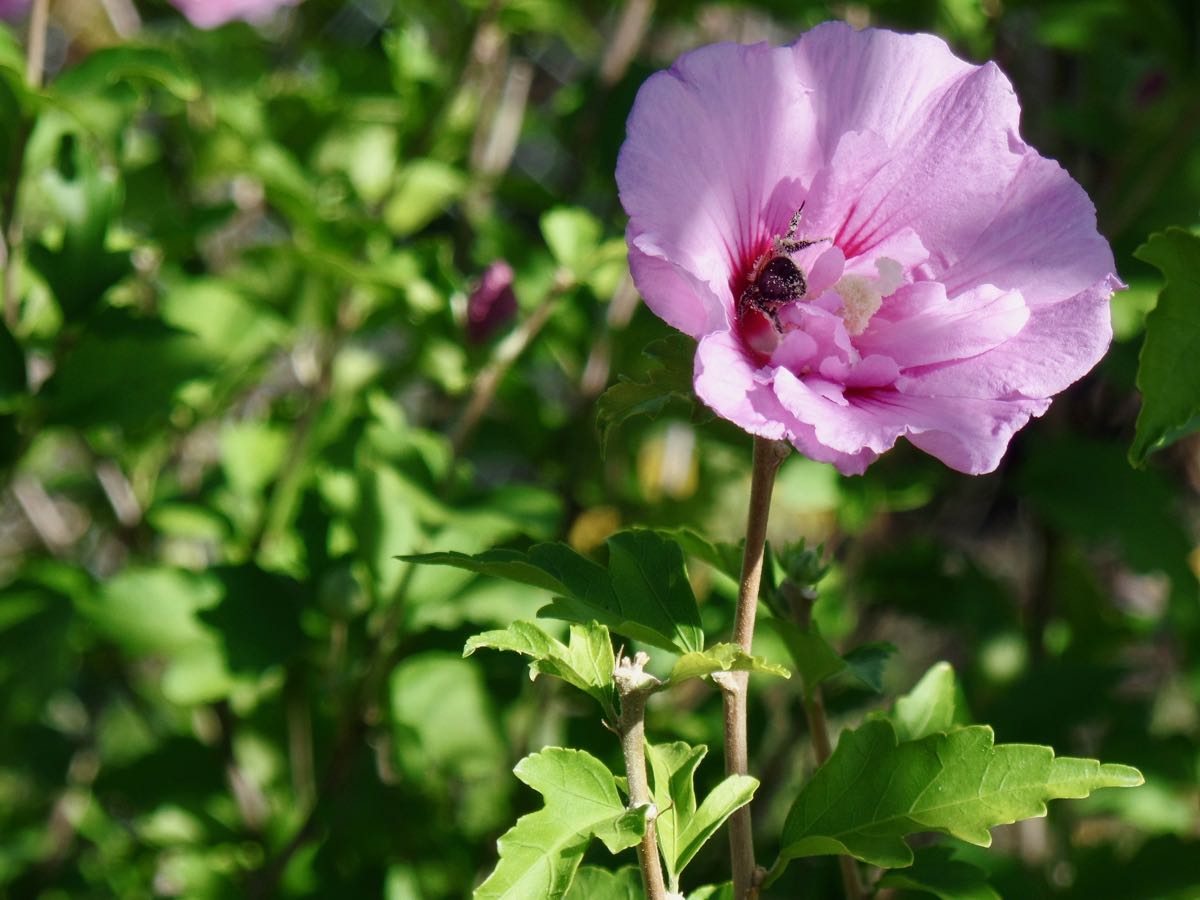 Don't they look great? That sort of view spruces up a park visit. 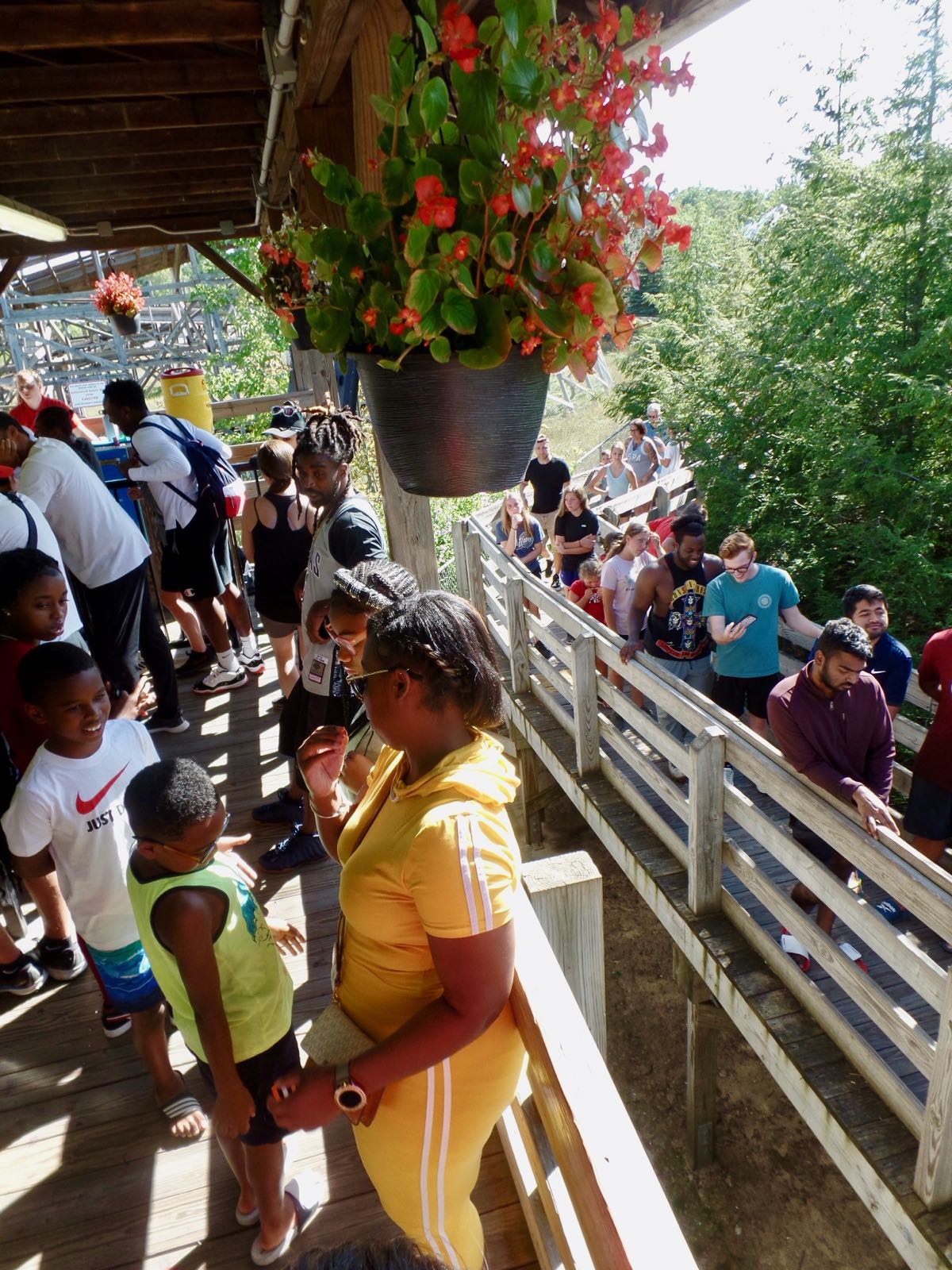 And here we are, just about to ride! And here we'd stand, you'll notice still in the direct sun, for fifteen minutes while someone finds a wet wipe. 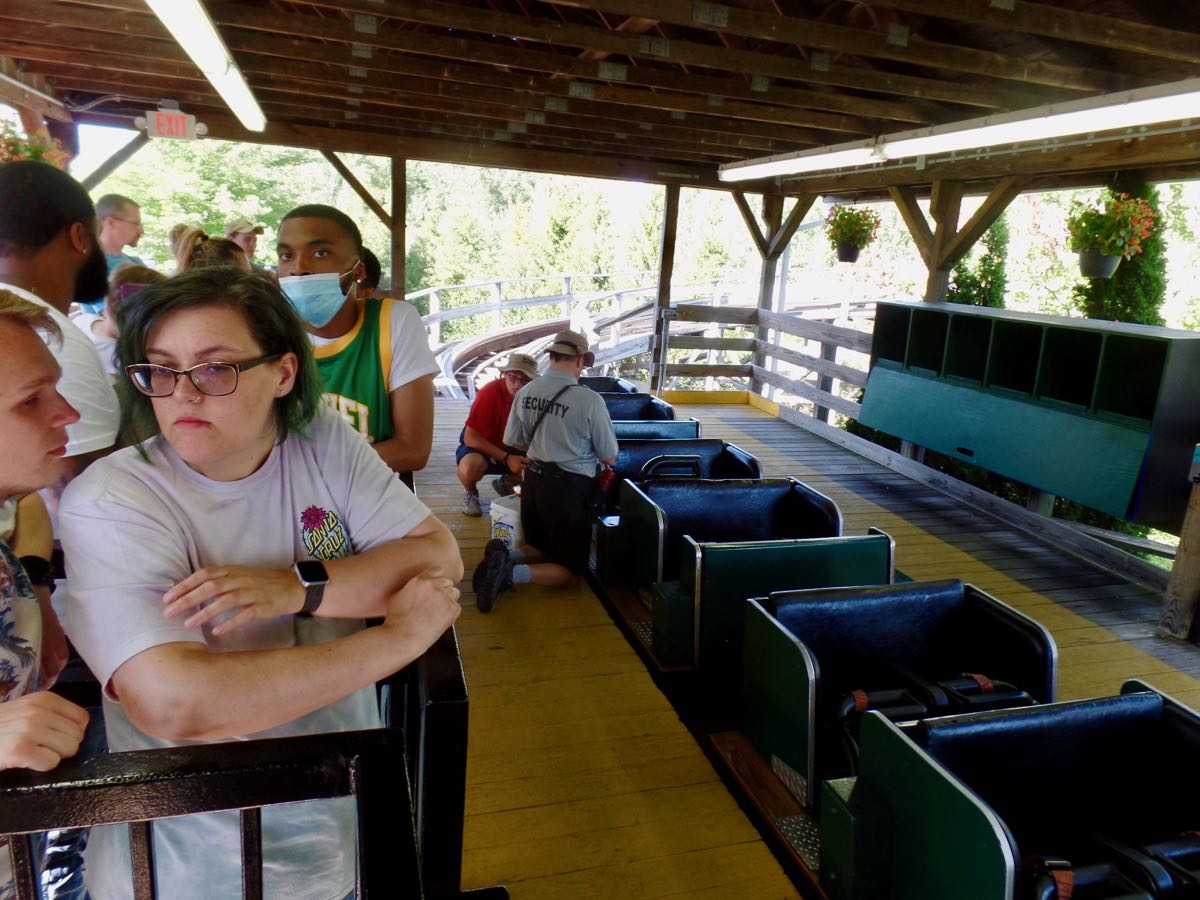 Finally! I don't know why they can't have a bucket of wet wipes at every ride, or at least the major ones. It was the last day of the season, what were they saving them for? Anyway if it weren't for this delay I surely would've been able to ride. 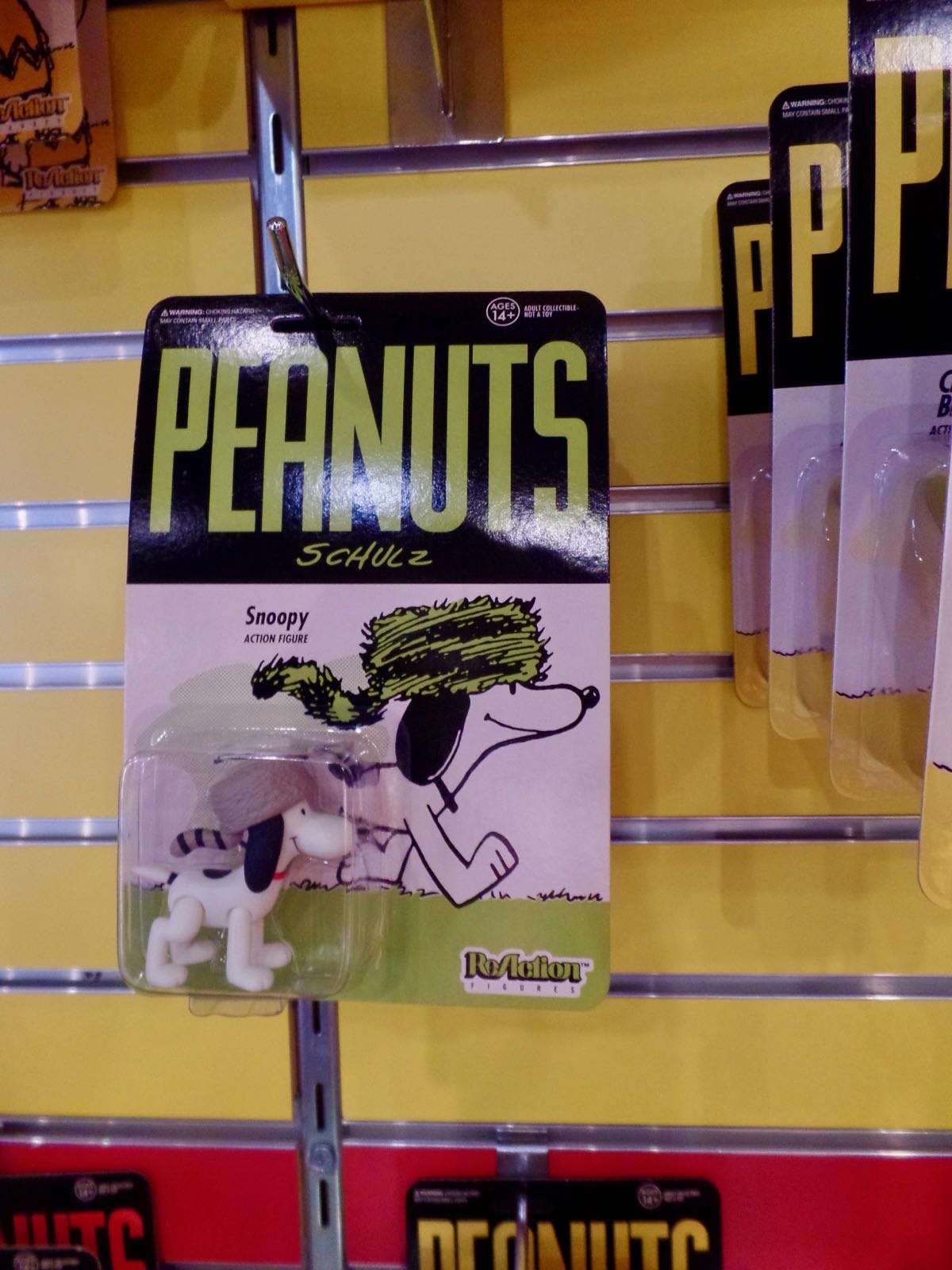 Sniffing around the gift shop. This ... uh ... yeah, I think there was like one Peanuts strip in around 1954 where Snoopy wore a raccoon cap but ... huh? 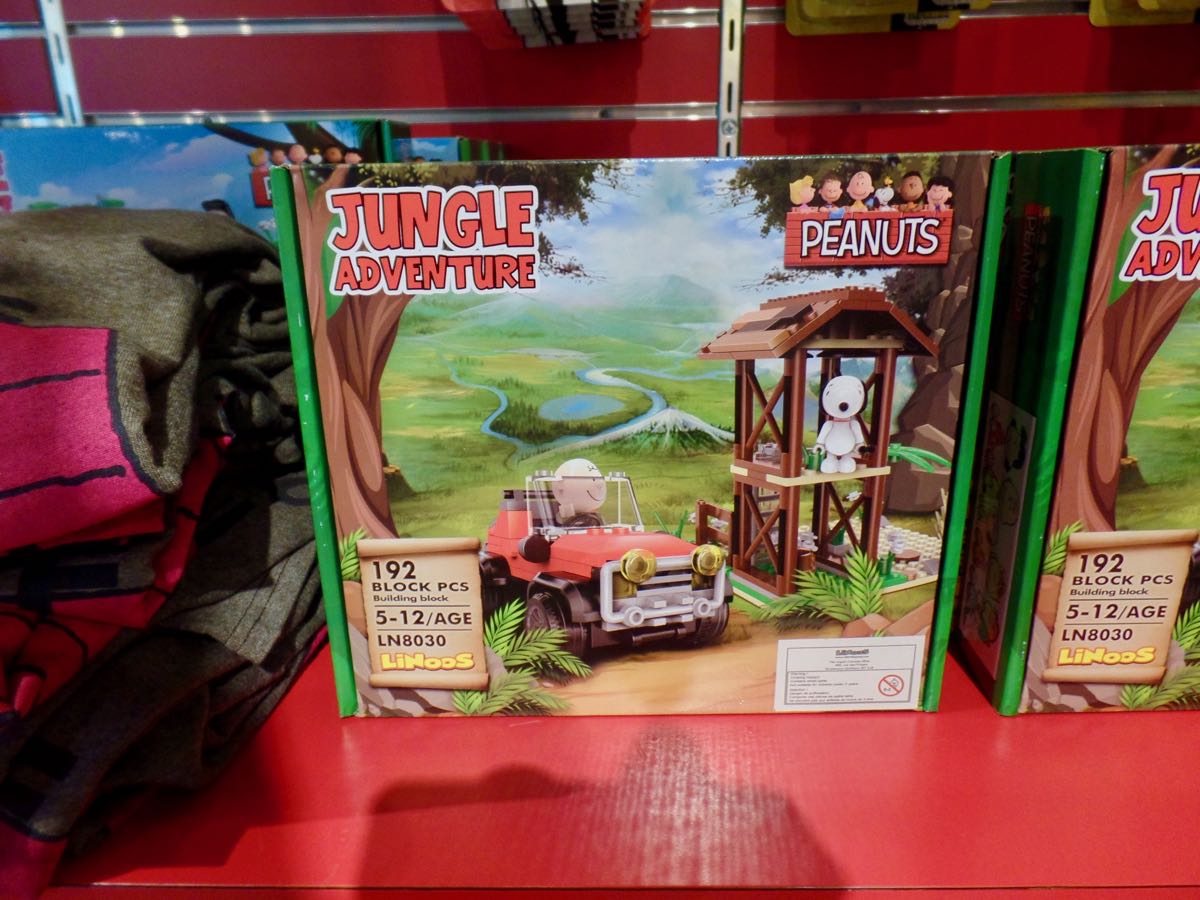 Ah, yes, I think we all have fond memories of that time Charlie Brown and Snoopy went on a jungle adventure?

Currently Reading: Off the Map: the Curious Histories of Place-Names, Derek Nelson. Going to set this next to Simon Garfield's On The Map: A Mind-Expanding Exploration of the Way The World Looks and have them fight.

PS: How September 2021 Treated My Mathematics Blog, which wasn't very good, but was better than the month treated me, which I noticed while writing was a joke I made about how August treated my blog and me.