Do you remember, Walter, smoking cigarettes

And while I have events to describe, I don't have time to write anything right now, somehow. Here are more Cedar Point pictures to enjoy instead. 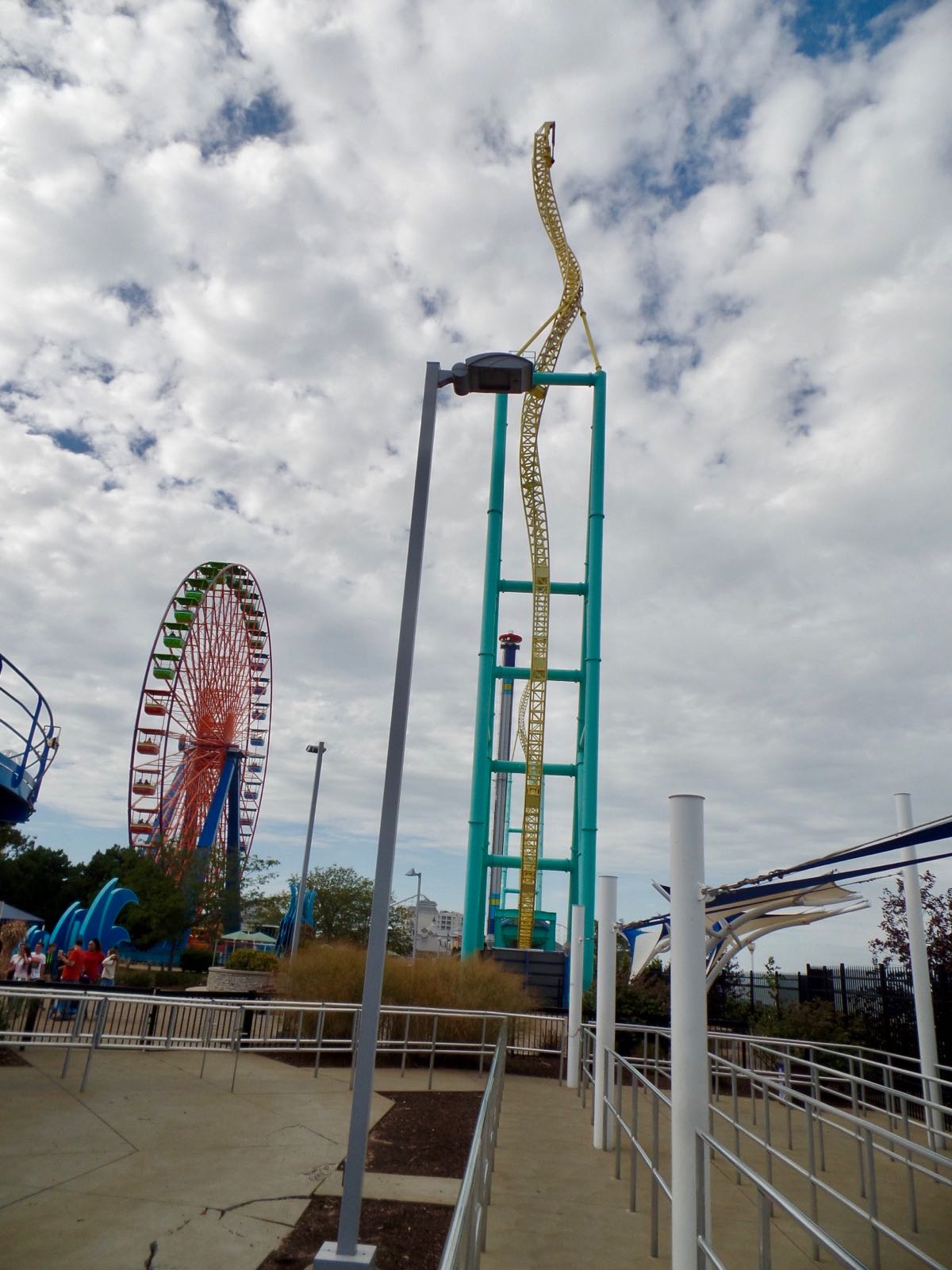 From the GateKeeper queue I noticed, as though for the first time, you could stand in the plane of Wicked Twister. So, uh, sorry I never took this photograph before but at least I got it now. 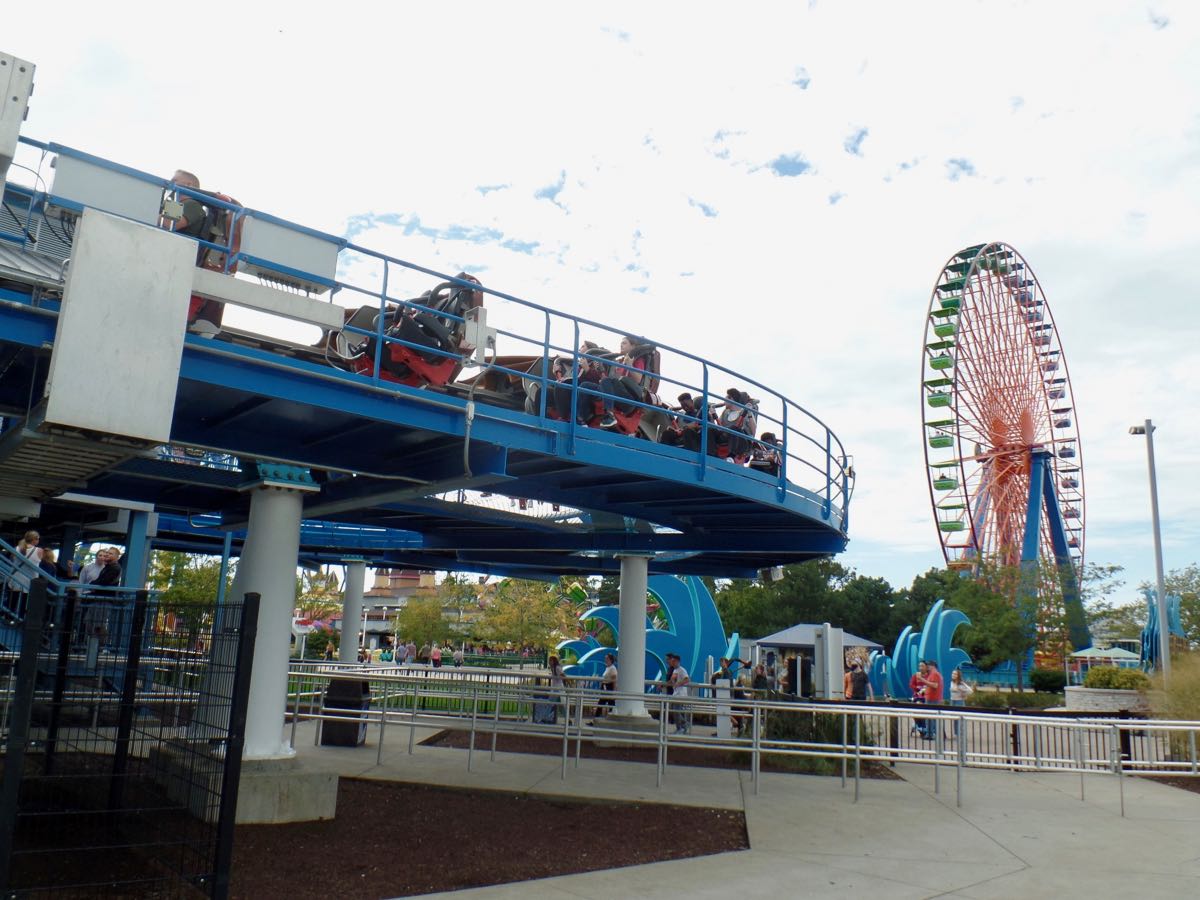 GateKeeper train leaving the station and getting ready for the lift hill. 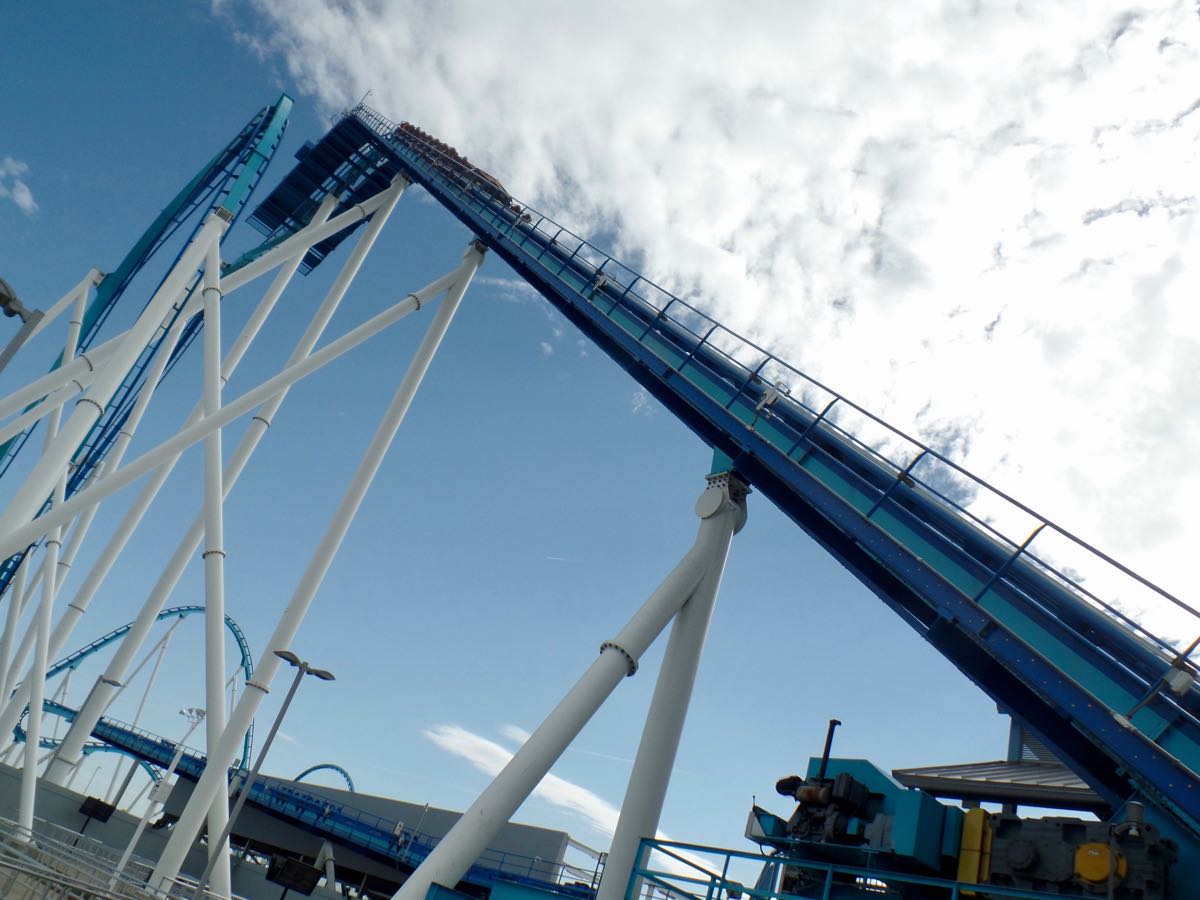 Lift hill on GateKeeper positioned against the clouds so that the composition looks like the flag of a Caribbean nation. 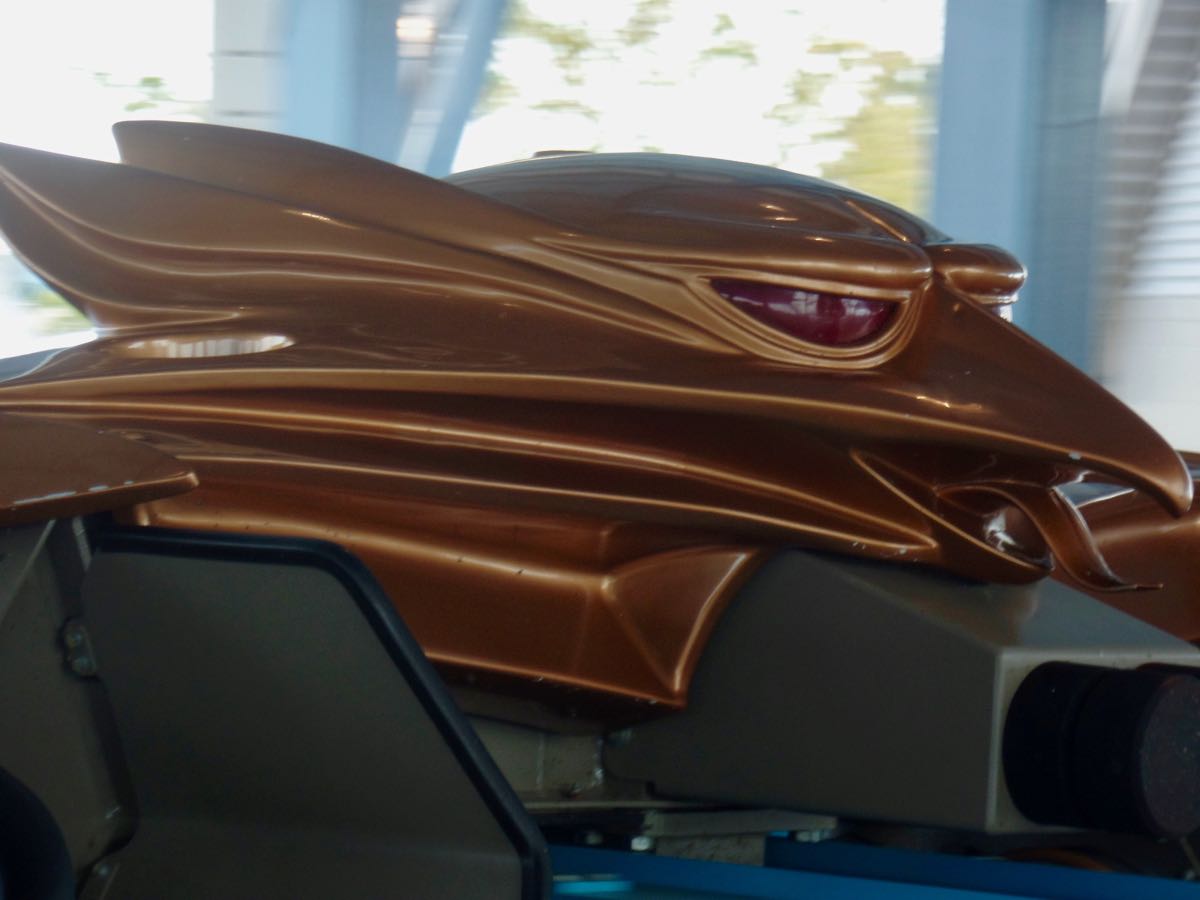 The gryphon head at the top of a GateKeeper train. You can see why everyone figured that gryphon statue was going to be a decoration for this ride, instead of being hidden for years, put in the Town Hall Museum, and eventually set outside Iron Dragon. 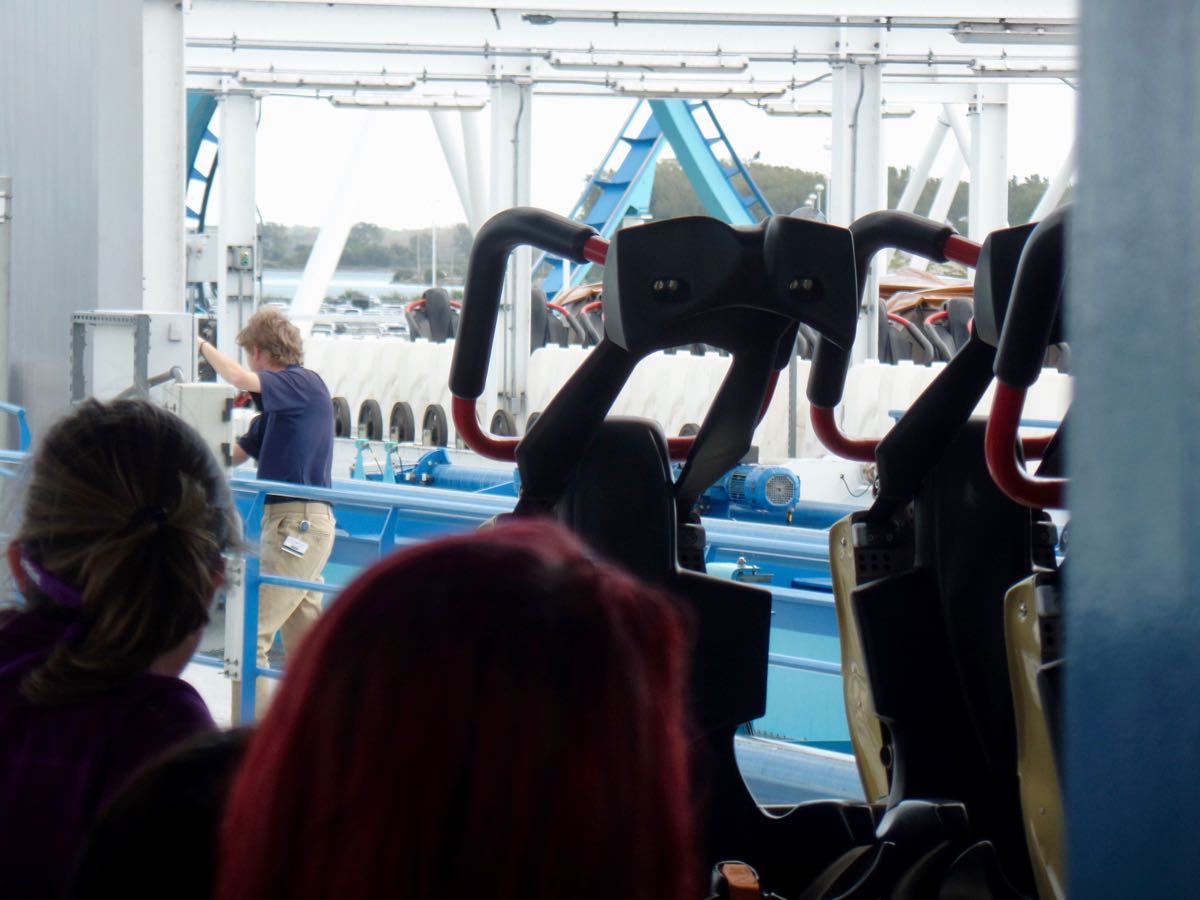 As we were about to ride they stopped the action for a good ten minutes or so, to transfer another train --- a third one --- onto the tracks. Some people grumbled, since it's not like the line was long as it was (GateKeeper has amazing rider capacity), but probably that third train would be appreciated by riders in an hour. 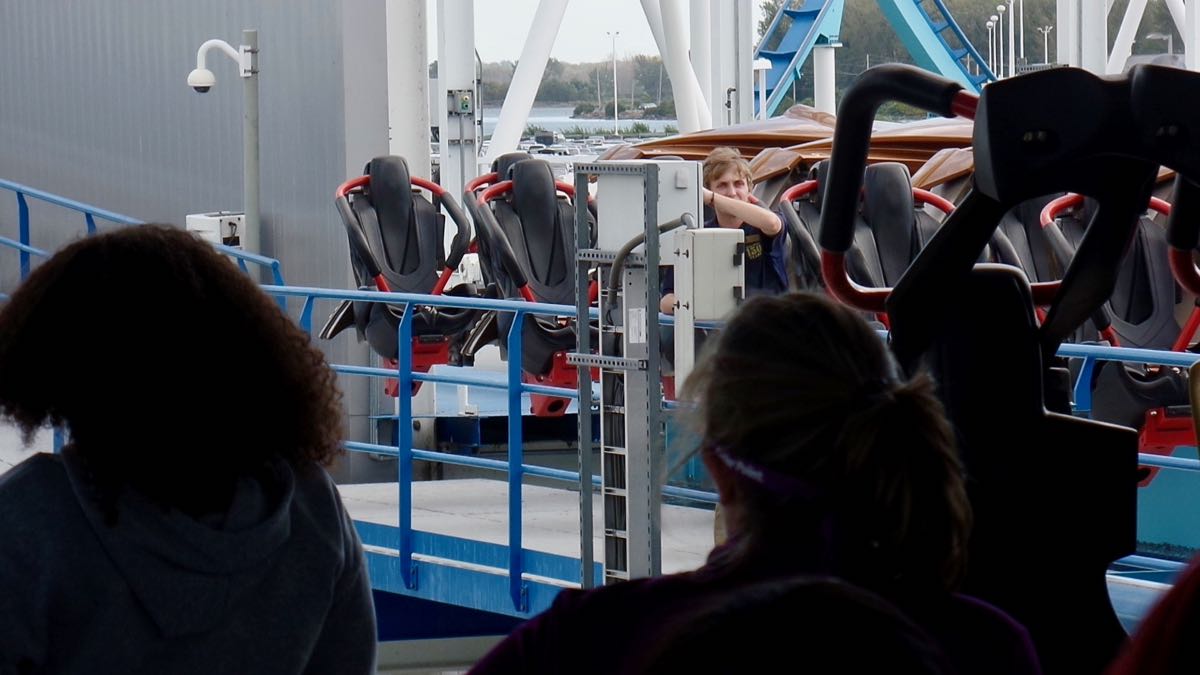 Ride operator at the controls as the transfer track slides into place. 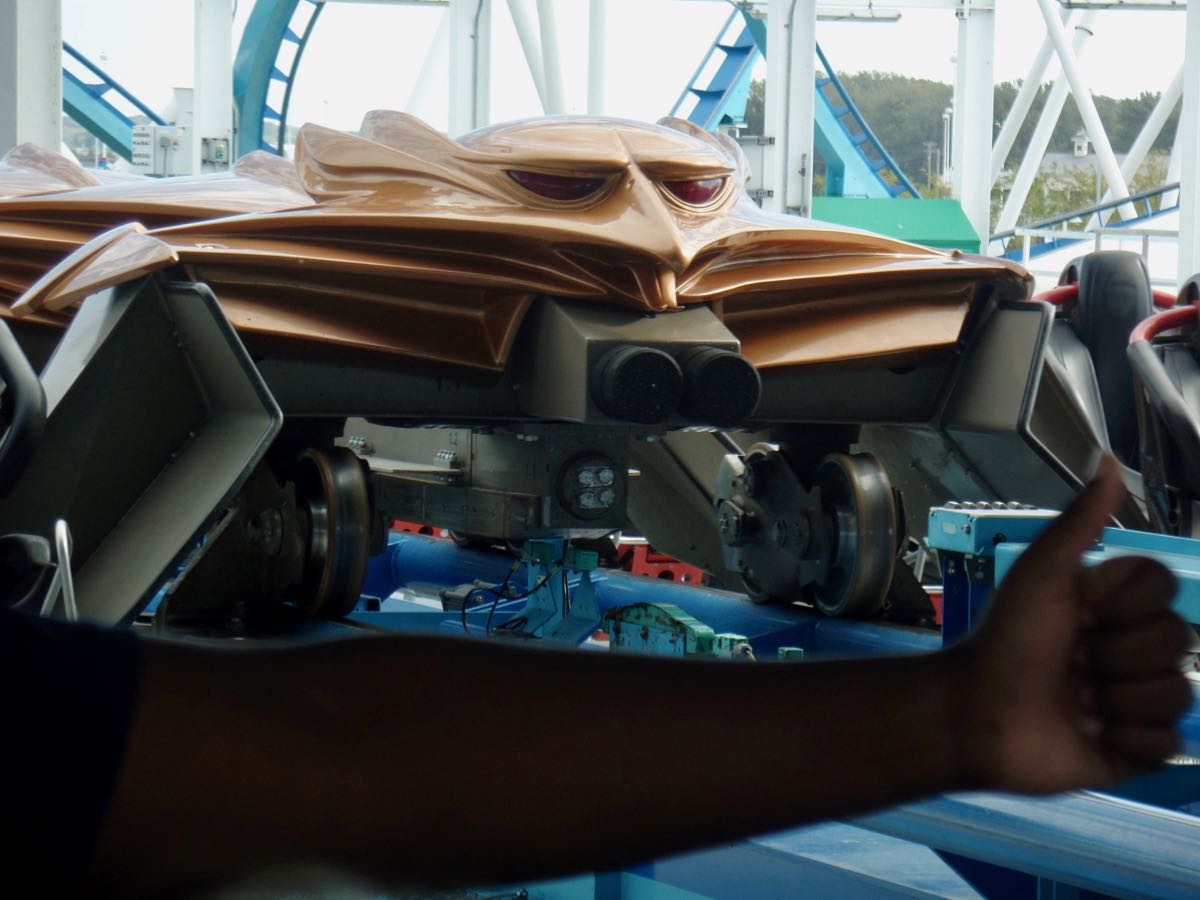 The new train's ready to roll in and the guy waiting for the next seat row over over approves! 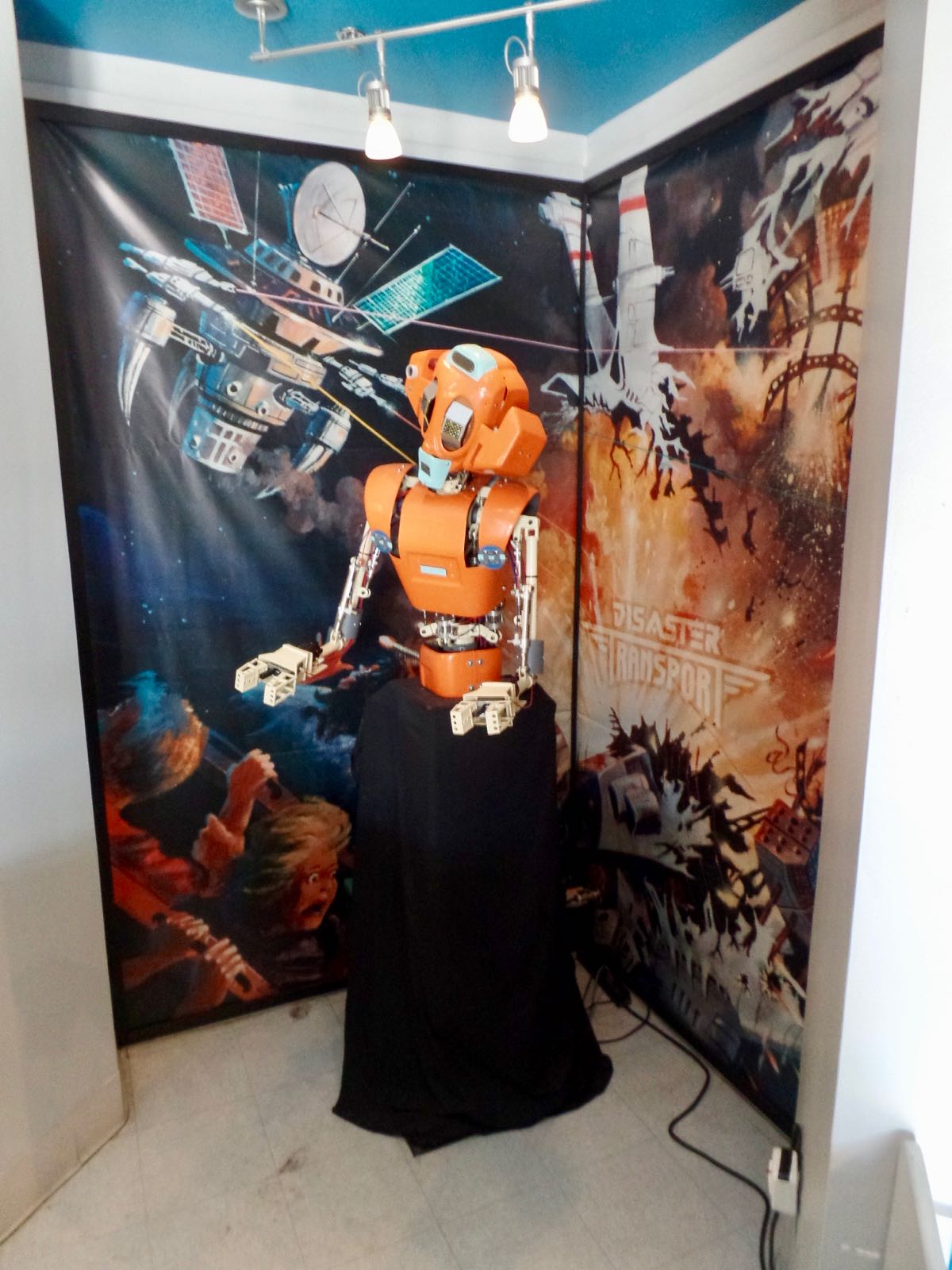 In the GateKeeper gift shop they had this bot, one of the animatronic props from Diaster Transport, the bobsled coaster torn down to make room for this ride. It's certainly the best view I've ever had of the bot and we were both surprised it was in this good a shape. 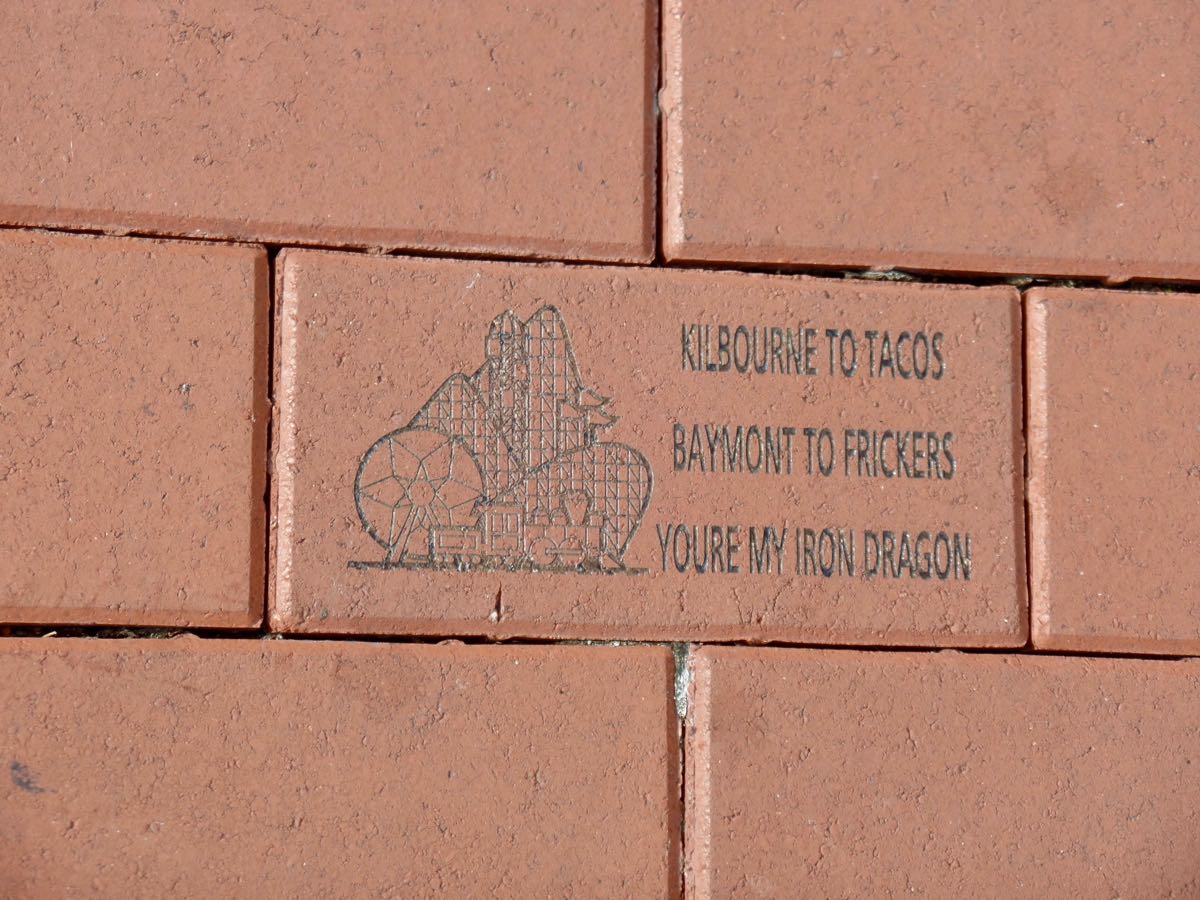 Looking at other people's anniversary bricks. Here's someone with some love for Iron Dragon. 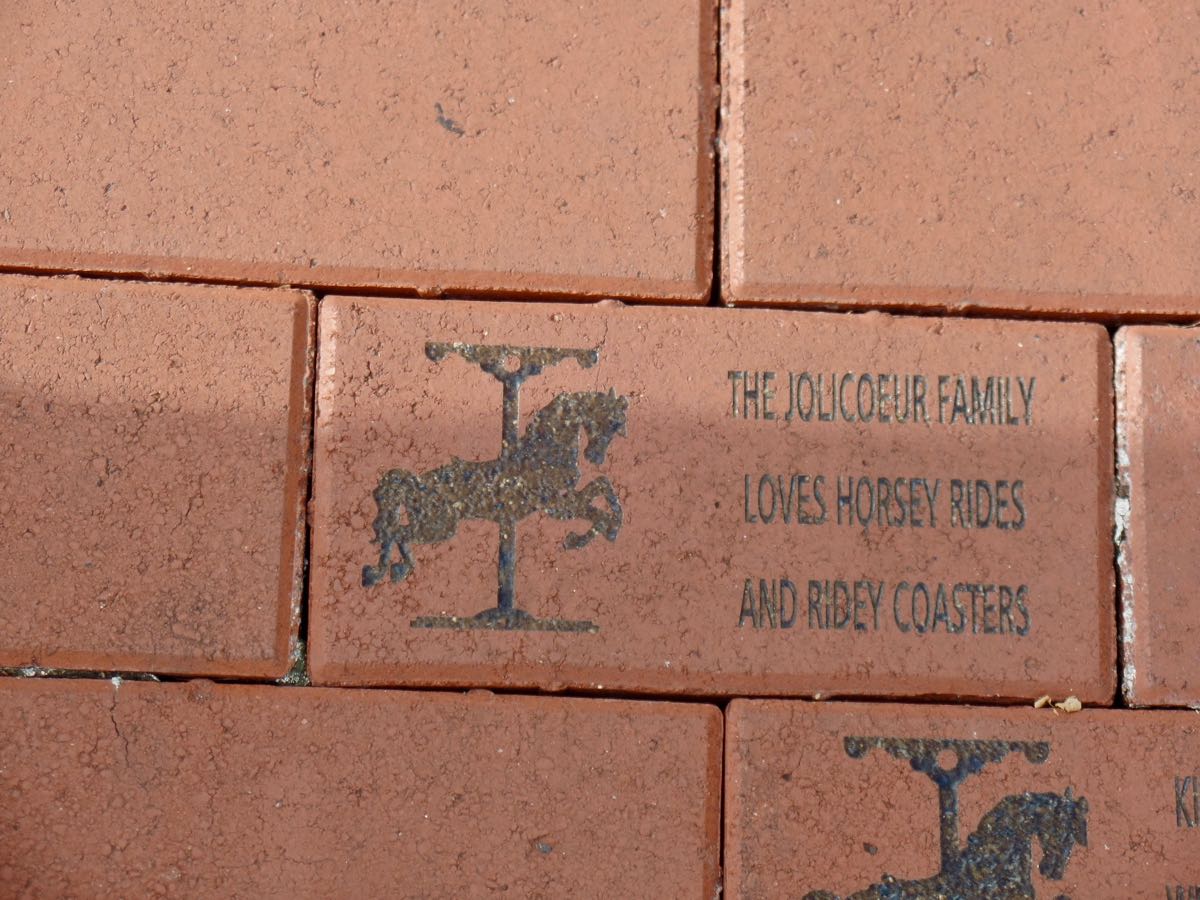 And here's someone who's there for the carousels and roller coasters. 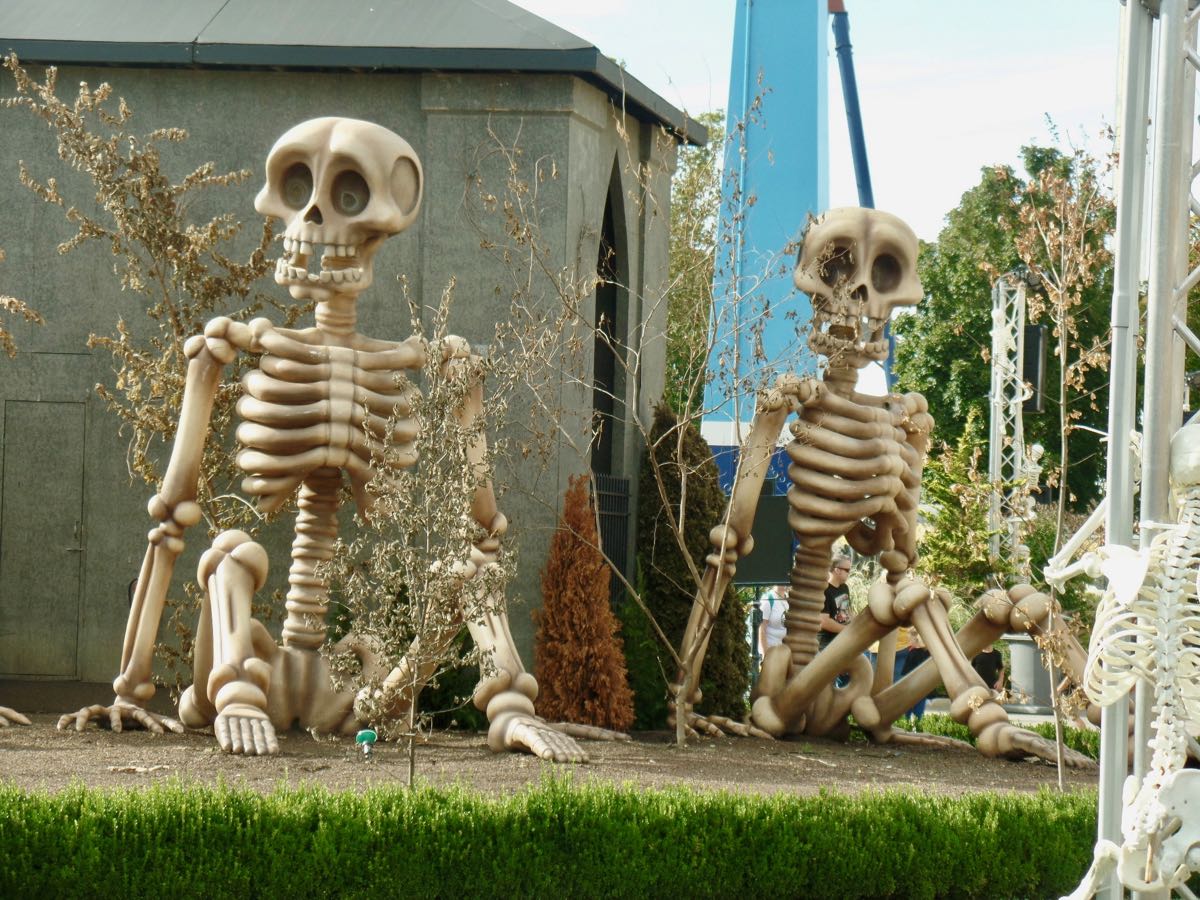 More skeletons looking around the place. 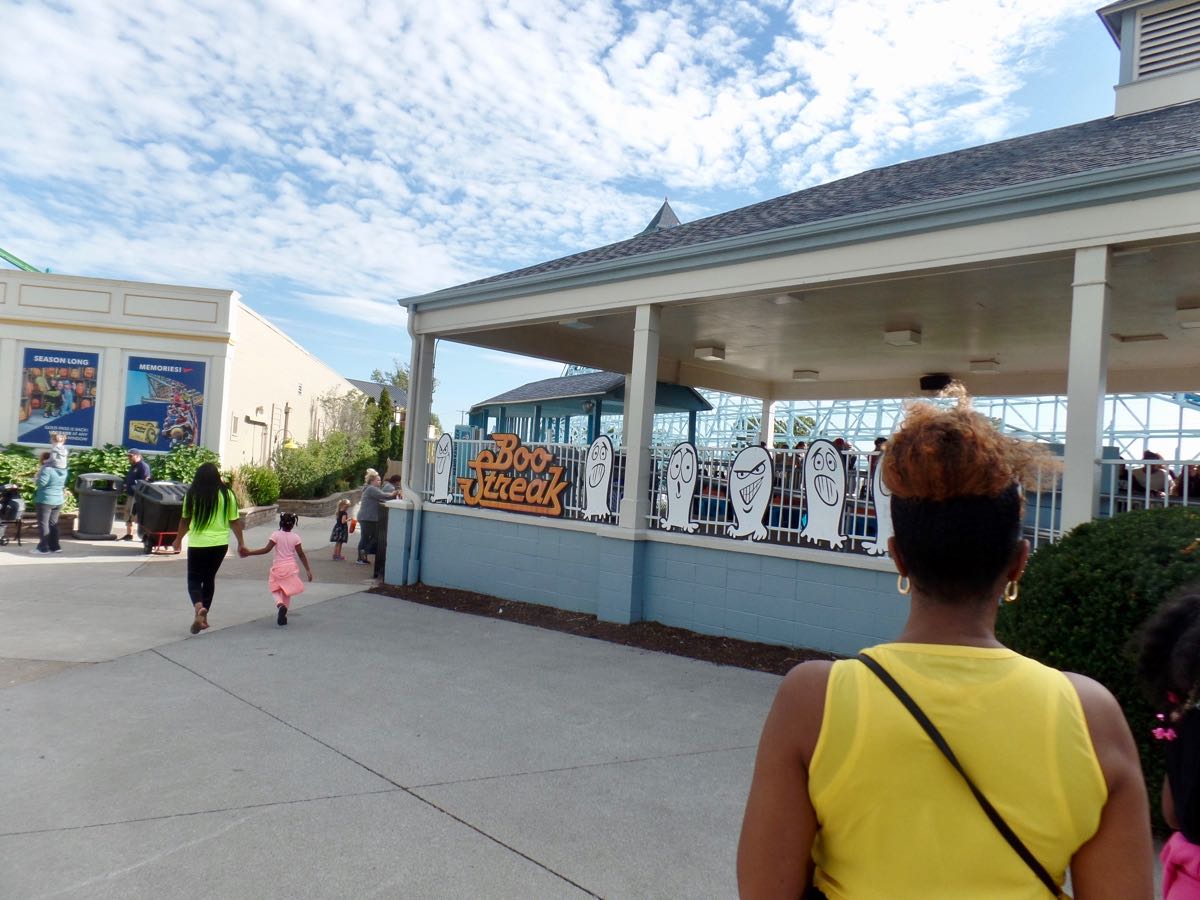 Blue Streak had its seasonal secondary name, plus ghost decorations.

Trivia: Samuel Adams inherited his brewery from his father. It soon went bust, leaving him in debt the rest of his life. Source: Signing Their Lives Away: The Fame and Misfortune of the Men Who Signed the Declaration of Independence, Denise Kiernan, Joseph D'Agnese.

Currently Reading: Tom and Jerry: The Definitive Guide to Their Animated Adventures, Patrick Brion. A circa 1990 guide to all the cartoon shorts, of the kind you just can't make anymore because we have inadequate Wikipedia entries for cartoons. Brion is of the impression that Mammy Two-Shoes was a beloved character, rather than the one we kind of hope will get out of the short before it gets really racist. (Also is certain she's the maid, which I guess is fair and maybe he's going from scripts or something. As a kid I always assumed she was the housewife, which I think is neither provable nor disprovable from text.) Brion is also of the belief that Nibbles/Tuffy was an enhancement to the series which, uh, have you seen his cartoons? Seriously?