I found a slender envelope in the mail, from Toyota Financial Services. It was, at last, the duplicate lien release letter for my dead car. I had lost the original long ago, along with my original title. And geting a replacement was far too hard. Toyota Financial Services doesn't answer e-mail, nor Twitter DMs. The local dealer said they couldn't help me any. Their phone line has a two-hour wait every time I call. They say you can press 1 to have them call you back when an operator's free, but they never call back. This is severe enough that if it's not illegal, it should be. There's certainly some offense to reason in a finance company being impossible to contact. But last week I sent them a priority-mail letter, shorn of nearly all human courtesy, saying they were directed to send me a lien release notice and what do you know but that finally, finally worked. They didn't send me the requested e-mail letting me know they were working on this, which shows what I get for having asked them to please do that.

I was just scanning it to send to Copart when they e-mailed me to say they needed more documents. Particularly, they needed a letter of authorization to apply for a new title. Signed by me and by my mother, who may or may not be on the original title. I don't know, and somehow they can't tell either. The writing suggested they needed a single letter, signed by me and my mother, and notarized. I don't even know if a notary will attest to only one signature on a document.

So I called Copart for clarification, and after being hung up while on hold, I called Copart for clarification again. And this started an adventure of an hour-long phone call beginning with Copart claiming that, actually, they couldn't apply to New Jersey for a replacement title on my behalf after all. So you can imagine what a cheerful, happy, unstressed mood I've been in. But you can also infer that this didn't end after that early, dismal news. After a lot of time of the guy tapping on keyboards and asking why that tab just closed he said that they do need notarized letters from me and my mother. But they don't have to be the same letter. And they aren't sure if they need the letter from my mother because somehow nobody can tell anybody whether my mother's name is on the original title.

But they've sent my mother a letter explaining what they need, and an overnight shipping label so they can get it back real fast. Also a similar one for me and I figure tomorrow to go to the credit union and, I hope, deal with that. They think this should resolve all that they need, and they can then send me a check for the insurance settlement and I can put the sad story of my dead car behind me.

I can't, of course. I know that this will never be behind me. I will be dealing with this to my dying day, which draws 22 months closer every day I have to deal with this, and

Let's finish looking at the last ride of the night, which doesn't yet exhaust all my pictures of that Cedar Point trip. 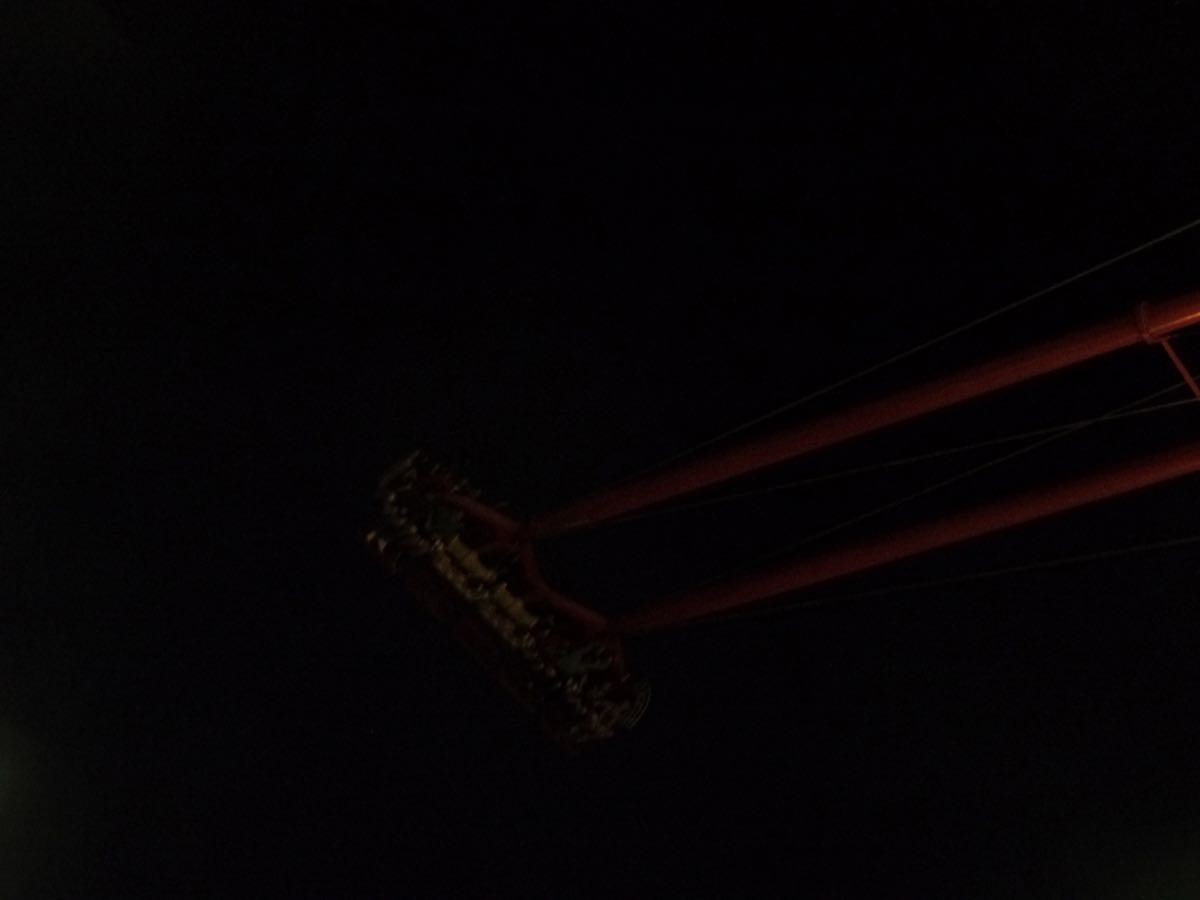 Skyhawk swing near the peak of one of its arcs. It doesn't go all the way upside-down but it's very good at making you think it just might. 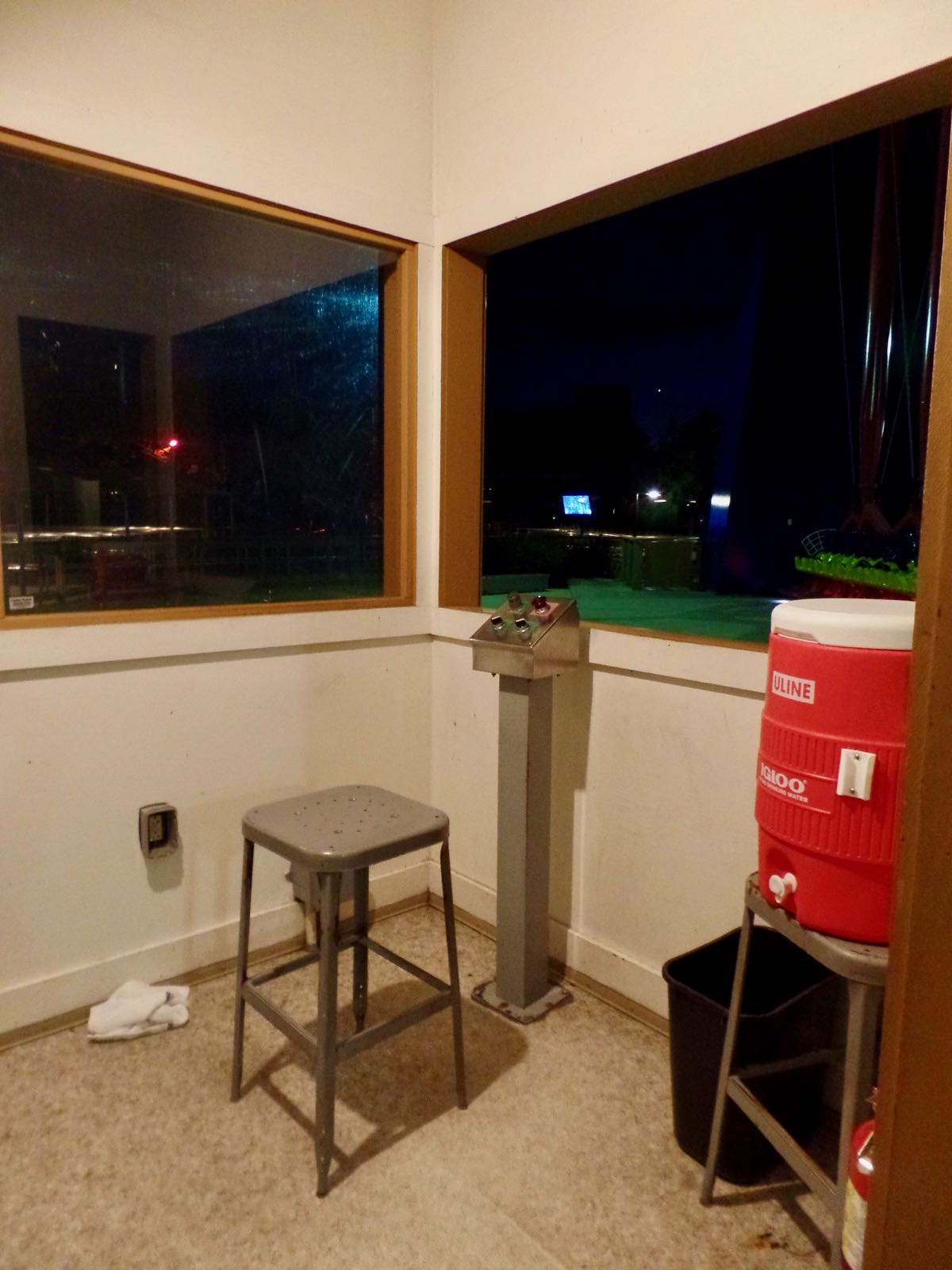 And here's a glimpse inside the operator booth for Skyhawk, taken after the last ride of the night (ours) was done. 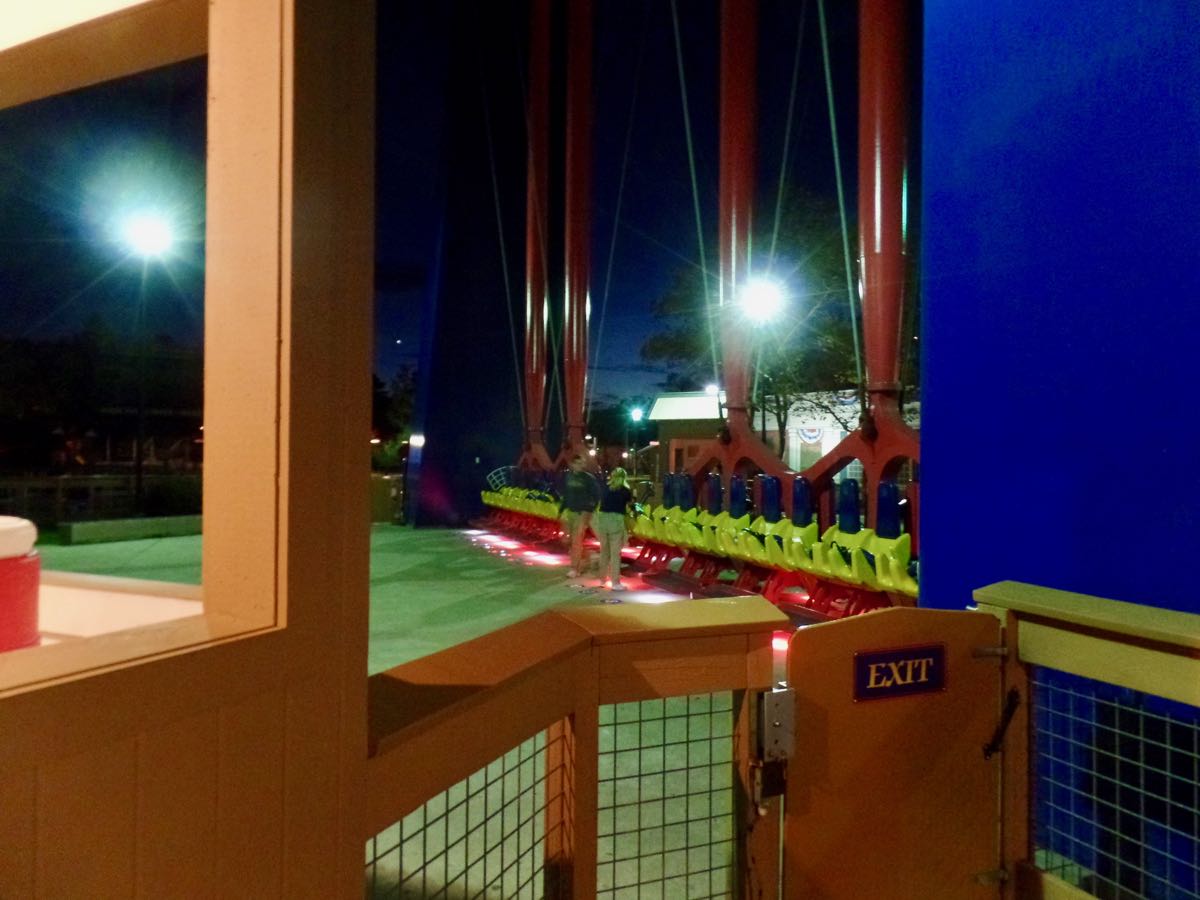 Ride operators putting Skyhawk to bed for the night. 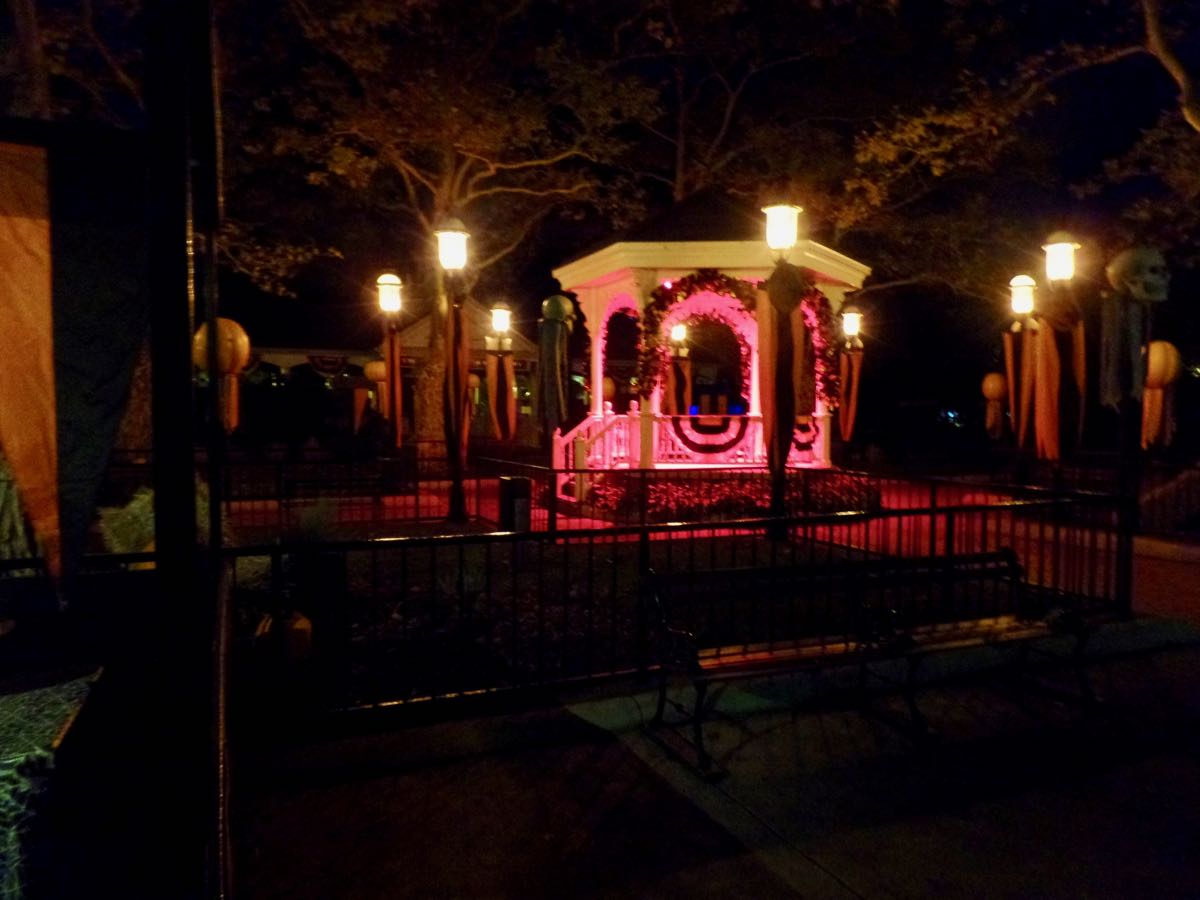 Skyhawk is near the former Town Hall Museum, which is off to the left of this picture. The gazebo here is the center of the Vaguely Old Timey Town area, wedged between the Frontier Trail and most of the Western-themed rides like Maverick and Steel Vengeance. 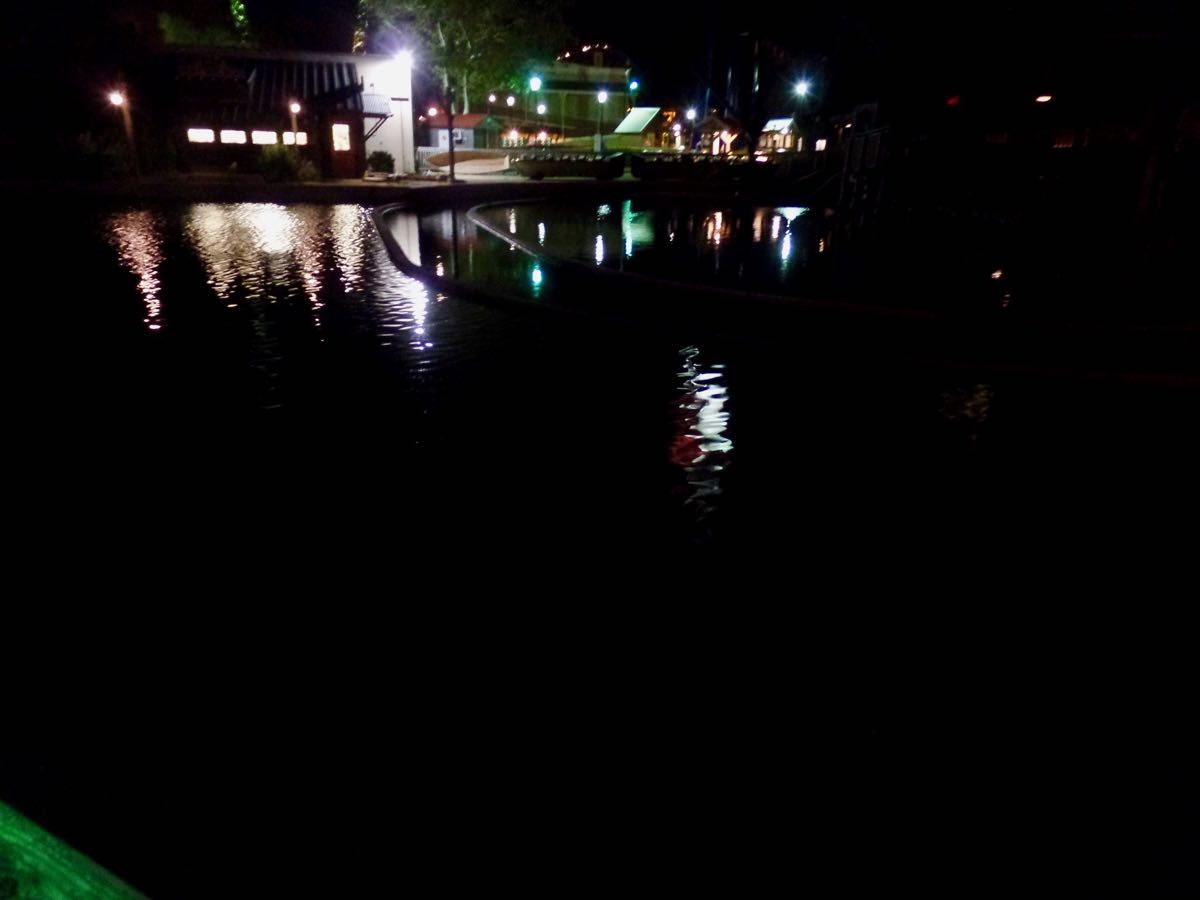 Reflections in the water near the Snake River Falls shoot-the-chutes ride. 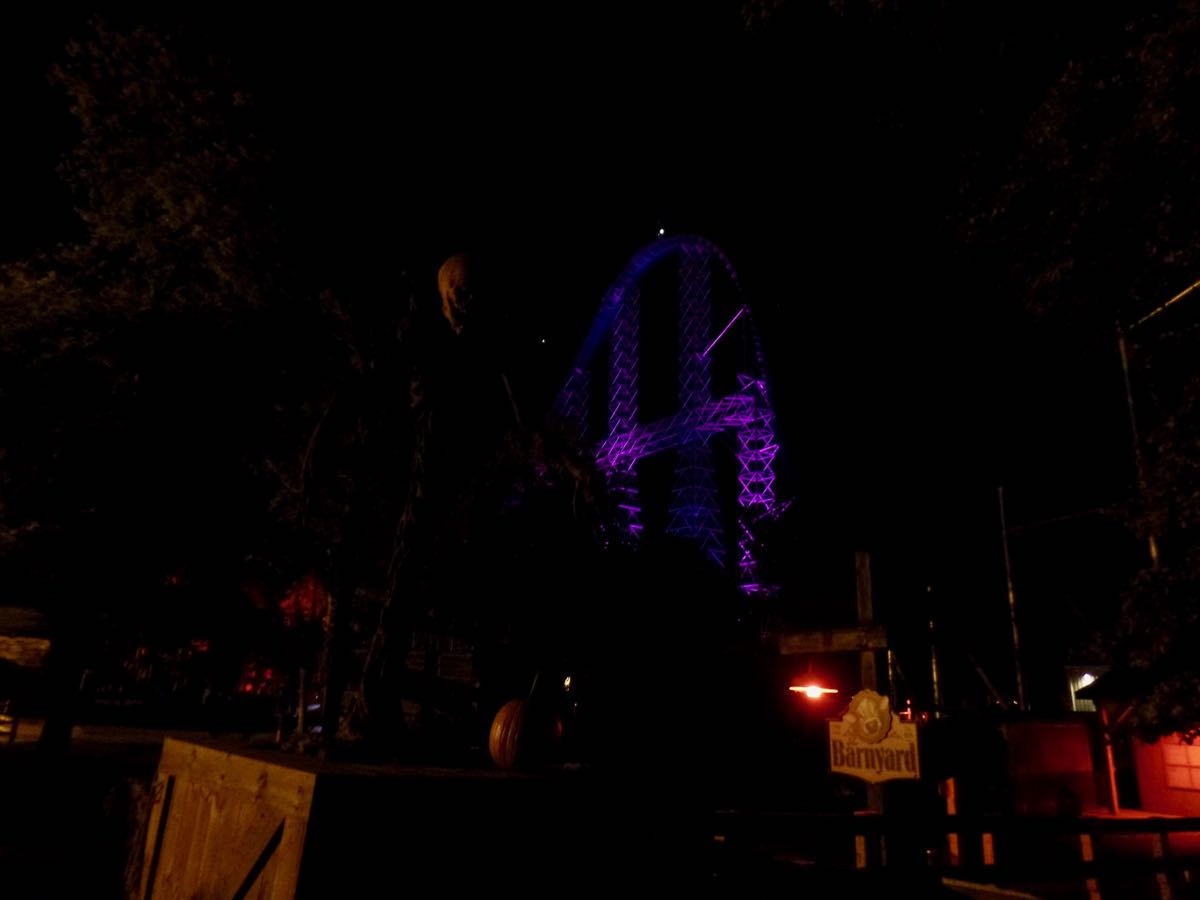 Photograph I was trying to take of Millennium Force from the Frontier Trail. One of the haunted-house performers, walking back from their station, warned that I wasn't going to get a good photo of the figure here with this lighting. And what figure is that? ...

Trivia: President Franklin Roosevelt was presented with the first Executive typewriter off the IBM production line. Source: The Iron Whim: A Fragmented History of Typewriting, Darren Wershler-Henry. (It was capable of proportional spacing!)