We'd fight the world so we'd be free

One of the first big things we planned to do, and lost to the pandemic, was Motor City Fur[ry] Con. We'd signed up to run panels and were about to buy our sponsorships when everything shut down. Earlier this year when it looked like people would get vaccinated to stop the pandemic they rescheduled the convention, setting it for Indigenous Peoples Day weekend. And we renewed the offer to run some panels.

Around Labor Day they asked if we were still up for running these panels and it wasn't an easy question. I ended up answering that, provisionally, if the pandemic didn't get significantly worse, we might be all right attending and given that, yes, we'd run panels. And the pandemic continued on, this terrible bleeding ulcer. It's not getting better, but it's also not getting so much worse as to make the necessary steps --- shutting everything down and everybody staying at home until everyone who can take a vaccine gets a vaccine --- politically possible. Either way would make the choice easy so we couldn't even get that.

Still, the convention was there, and drawing closer. And made a major, critical announcement: attendees had to show proof of vaccination. Not just that they'd got their shots, either, but that they'd had three weeks from the last shot, so would be fully vaccinated. We thought about going just for the day, just for the panel I was running. (They took my provisional yes as a definite yes and somehow

bunny_hugger never gave an answer so they didn't schedule her panels.) Or would that not count as actually attending, making this the first Motor City Furry Con I'd miss, and the first time

bunny_hugger had missed either Motor City or its predecessor con, Further Confusion North? Well, there was no space in the con hotel or in the other hotel, across the street, and with their new location there were no hotels in any reasonable vicinity, which settled that.

And then some new spaces opened up in the con hotel. It would be possible for us to stay in the hotel. We'd have a space to retreat to if we felt things were too crowded. We'd be reasonably confident we were only encountering vaccinated people. We could certainly stay masked too.

So, we did it. We booked a room and finally got sponsorship to attend Motor City Furry Con, and to do something where we'd stay, like, in a hotel, for the first time since the state pinball championships a year ago January.

And that's this story.

Pictures of that will come soon, don't worry. For now, some pictures from my visiting the Sparks Pinball Museum, the day I spent waiting for Sunshine's echocardiogram. 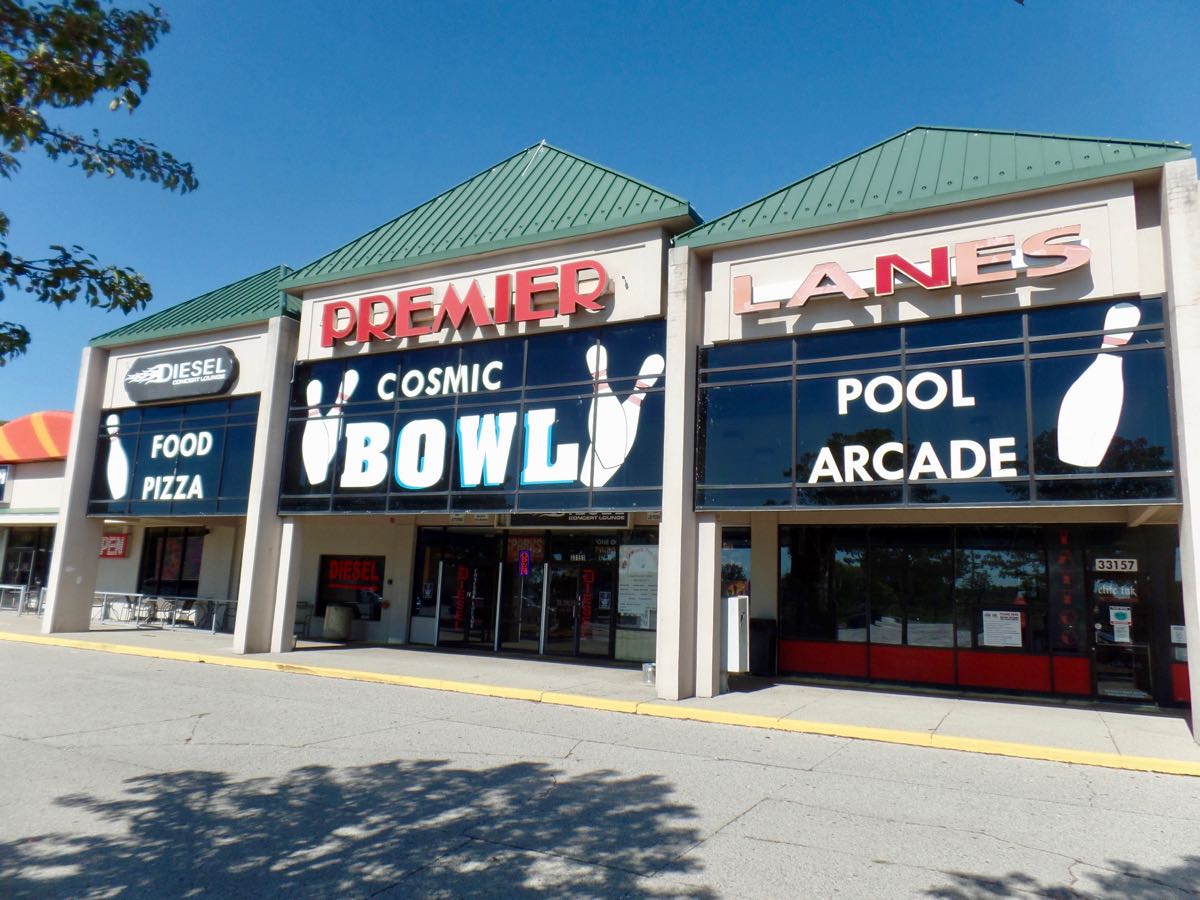 The bowling alley that houses the Sparks Pinball Museum/arcade. It was about noon and the place was even quieter than you'd figure for that. Seriously; I've been to our local bowling alley early in a midweek afternoon and it was busier than that. 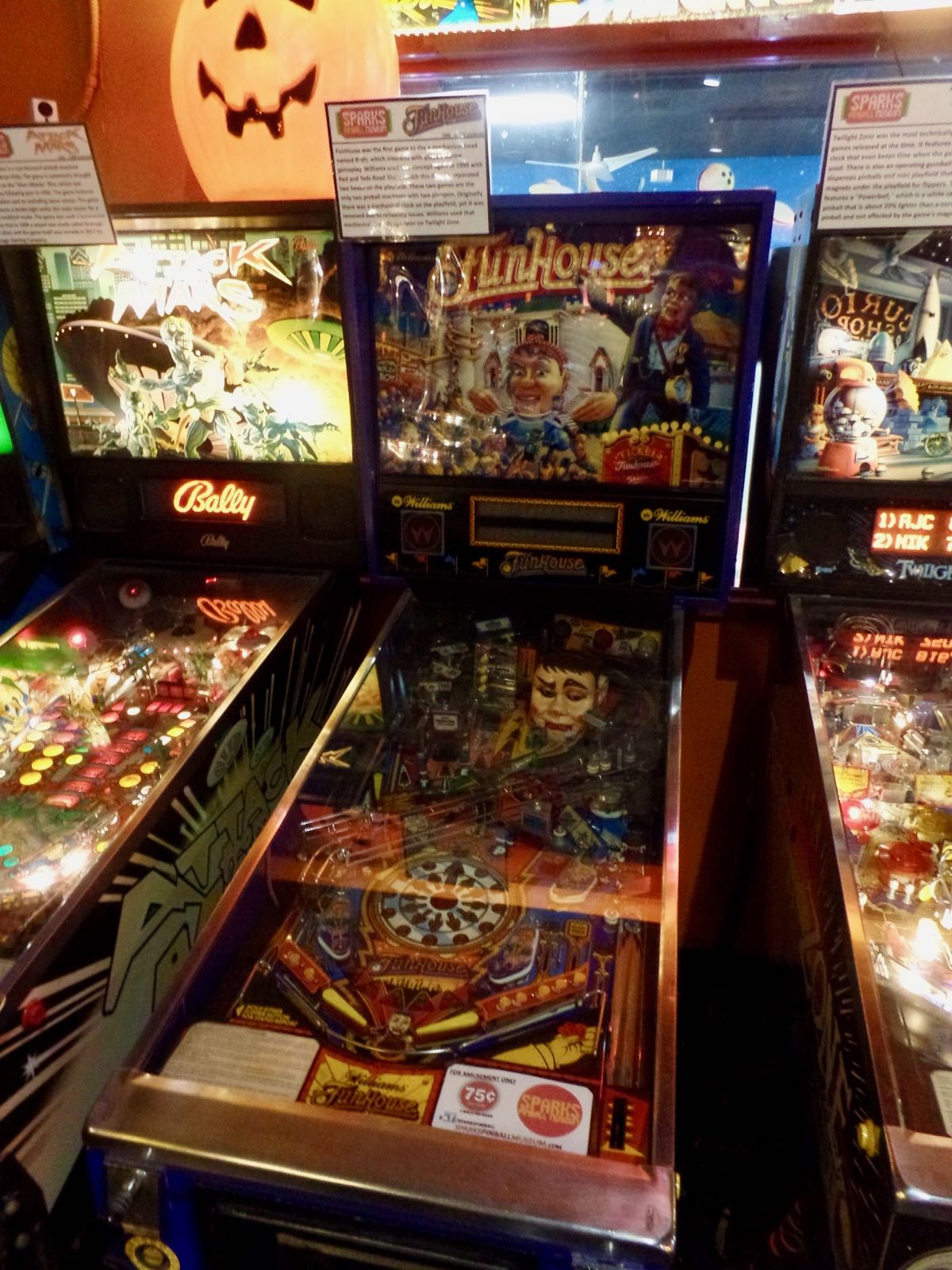 But terrible news! FunHouse wasn't working. No idea what was wrong, but I trust they wouldn't leave the game off if it weren't serious. Probably just as well. If I were fortunate enough to play it enough to get on the high score table

bunny_hugger would be even more envious. 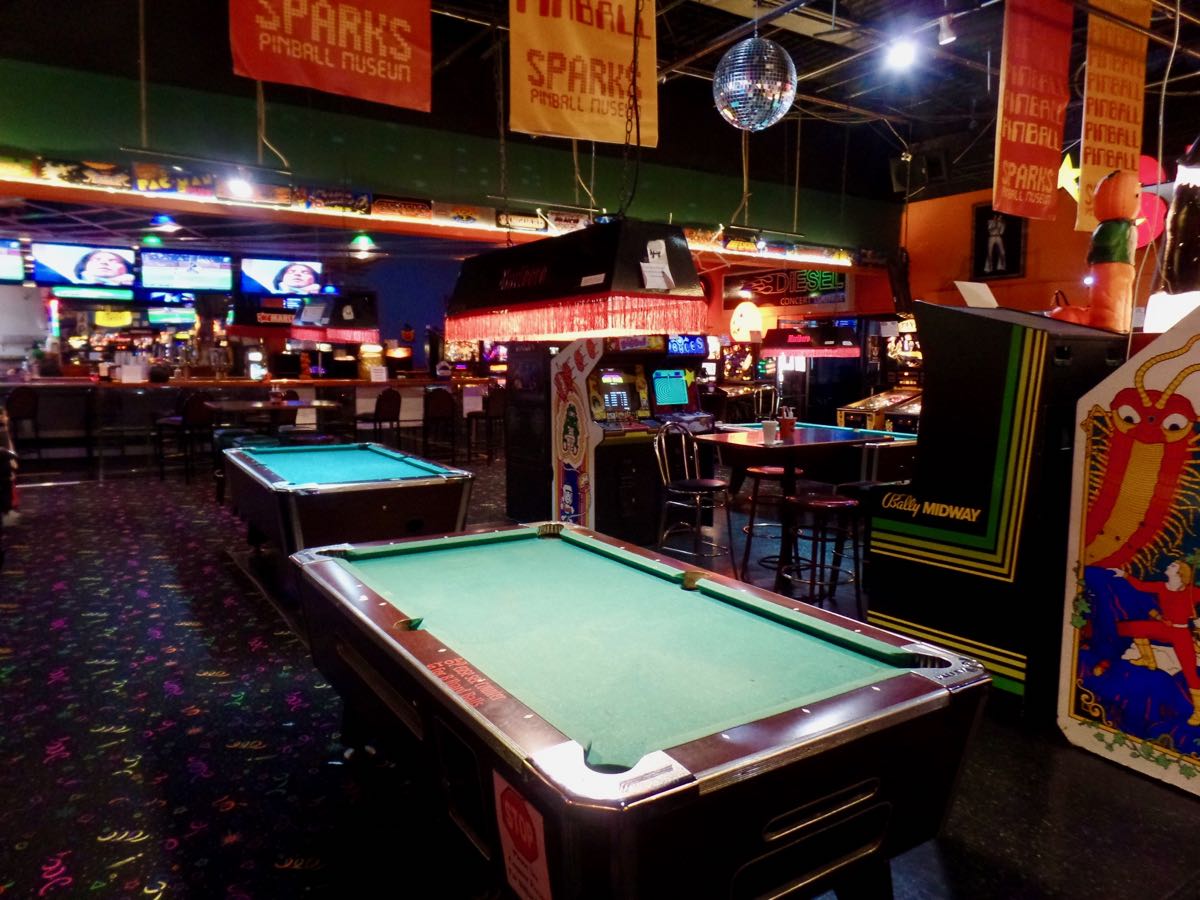 Pool tables and arcade games in the center of the pinball room. The last time we were there, in March of 2020, they had this long counter running along the center where those games are now. 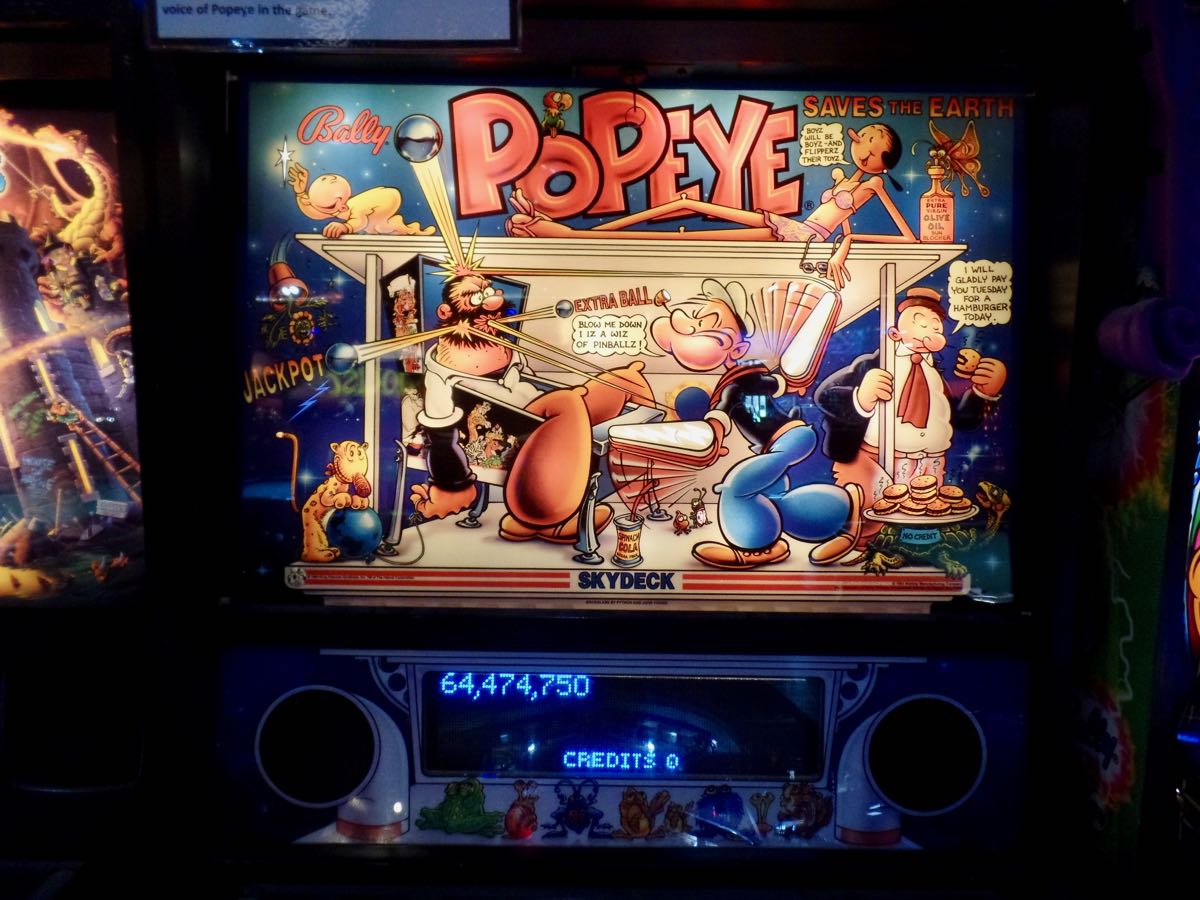 Popeye was working, if you can call it working. I had a pretty solid game, too, considering. Notice the backglass of the game has the original game on it. 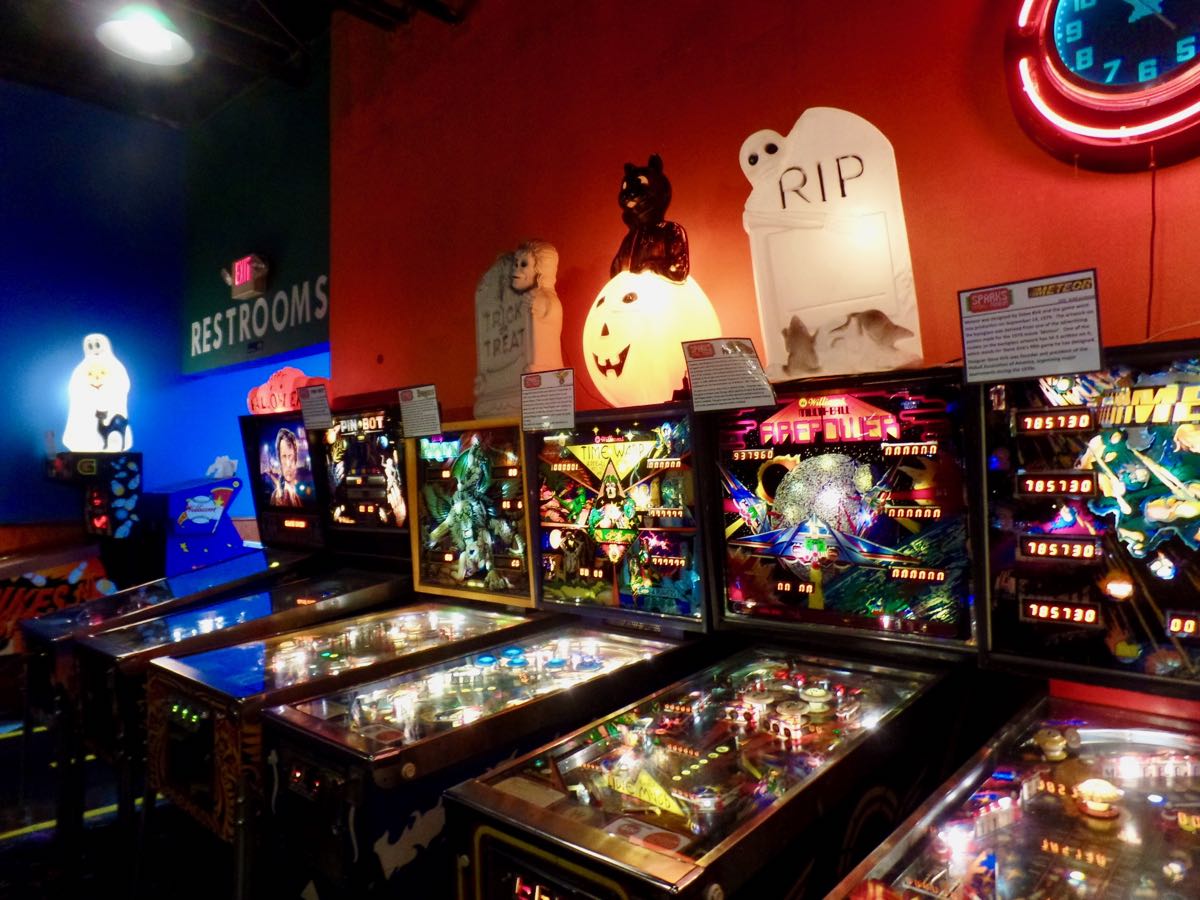 Some of the solid-state games, decorated for Halloween. 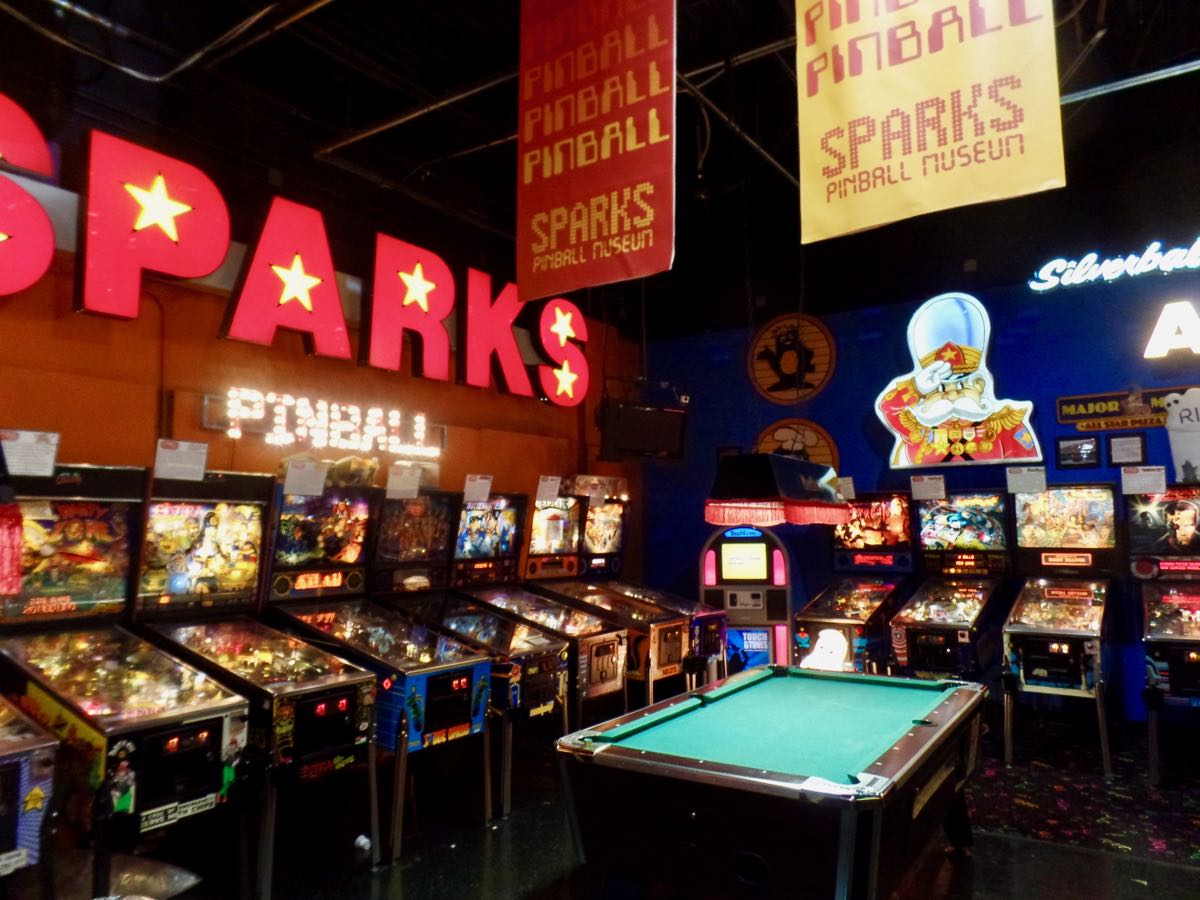 And a look at the late-solid-state games, plus a nice big sign telling you where you are.

Currently Reading: Lost Popeye Volume 13: The Islands of Sunk Sun Acts I and II, Tom Sims, Bela Zaboly. Editor Stephanie Noelle. There's always a certain level of nonsense in these stories but this seems more than usual. Like, Olive Oyl starts out convinced she's a spy but I can't figure if this is all something in her head or if there was a mention at the end of the last story I'd forgotten. Or, there's a good bit where Popeye has Secret Orders, and he finds himself surrounded by dozens of identical Wimpys all asking to see the secret. And then dozens of duplicate Olive Oyls. And even replicas of the hotel clerk. OK, good mystery developing here, so what's the story? ... Well, Wimpy and Olive Oyl explain they hired the detectives who all made themselves up to look like their duplicates. Because they just wanted to know the Secret Orders. And ... what? It's like Sims and Zaboly realized they couldn't follow up on this great idea so they turned it into a punch line at the cost of everybody making even less sense than normal.