We'd save up all our money and

bunny_hugger's parents. I had brought her down the day before, and spent some time with them. If they thought anything ill-advised about our going to the convention they didn't hint any of it to me. Sunshine spent some time sulking, after she was set up in her temporary home, and it took a half-day before she really started eating again.

bunny_hugger's mother thinks Sunshine is even blinder than we had realized. Being transported to an unfamiliar place may be upsetting her more than it otherwise would.

But also not slowing us down: the belated retirement party for someone in

bunny_hugger's department. The forecast was for a cold, rainy afternoon and they were planning to have it outdoors, so they postponed the event a week to when it could piggyback off a department meeting anyway and, it turns out, it would be more clearly threatening of rain. (That turned out all right, though.) No, we would just get out there late for the usual reasons. We're late risers, it's hard to get the house secured for the weekend, it's hard to get everything packed for a weekend. Especially with us so out of practice for trips; we haven't been out overnight anywhere since Easter with

After a one-year stay in Livonia in 2019, Motor City Fur[ry] Con relocated again, to Ypsilanti. It feels closer, but in actual mileage is suspiciously close to the same distance. But we found the hotel, and a parking lot very near full of cars with license plates that read out puns, you know, just like you expect at a convention. We checked in and got room 455, a number I can't forget because when we got off the elevator we found the sign pointing one way for rooms 401 through 419, and the other way for rooms 420 through 439, and you'll notice some numbers not in that range. It turns out 455 was placed in-between rooms 422 and 423, and while we can imagine an explanation for this anomaly, I like having the anomaly.

Then there was checking in, which required finding where the con space was. This was at the other end of the hotel, fair enough, with the administrative-type rooms for this on the second floor. Little odd but reasonable for someplace like registration that most people will need to go to only the once. We also got there in one of those precious moments when there was no line at all. The con let us upload icons for our badges, and I learned I don't have a picture really good for use as a badge picture, at least not at the size they use. We also learned the convention was not giving out program books, ``to save trees'', a change we do not like at all. We don't have smart phones and don't want to be forced into using them, and a con book will tell you what was scheduled to happen at the convention even four years later when the web site has become a poorly-archived memory. It felt cheap, and we're hoping this was part of the convention being a little chintzier than usual because of the pandemic. The glass they gave away to sponsors was also a flimsier thing than past years, again, quite reasonable given the reduced attendance and capabilities of this year's convention.

We also checked the arcade room. Vix had made good on a plan for 2020, and brought a pinball machine. Earthshaker. It's a late solid state game, and it was in rough shape, but it was also a playable game.

bunny_hugger looked at it, and saw the high score table --- it was recently reset, so a mere six million points would get you on --- and declared she would be on the high score table before the convention was over. And with that taunting of the gods we played a couple games and then went for something to eat.

That would be White Castle; there's one in Ypsilanti that was not as close to the hotel as it seemed from Lansing, but still. Also I tried to order my preferred Freestyle Coke drink, Mello Yello Zero Citrus Twist. Trouble is, besides that being a lot of words in a row, is my brain refuses to remember ``Citrus Twist'', and prefers, like, ``Citrus Blast''. And this confused the person taking the order, so badly that she gave up on getting my drink over the speaker and said to just come around and order at the window. I have got to either learn the actual thing or just get Coke Zero Orange instead. Indeed, I did try switching to that and she wouldn't let me. And, getting back to our room to eat, we had to cut unpleasantly short a chat with Pakrat, one of those people we only ever see at conventions, for all we'd have liked to talk longer.

Oh, and were you wondering What's Going On In Mark Trail? What happened between Diana Daggers and Bee Sharp? July - October 2021 gets explained here.

Now let's finish a quick little tour of the Sparks Pinball Museum out in Chesterfield. 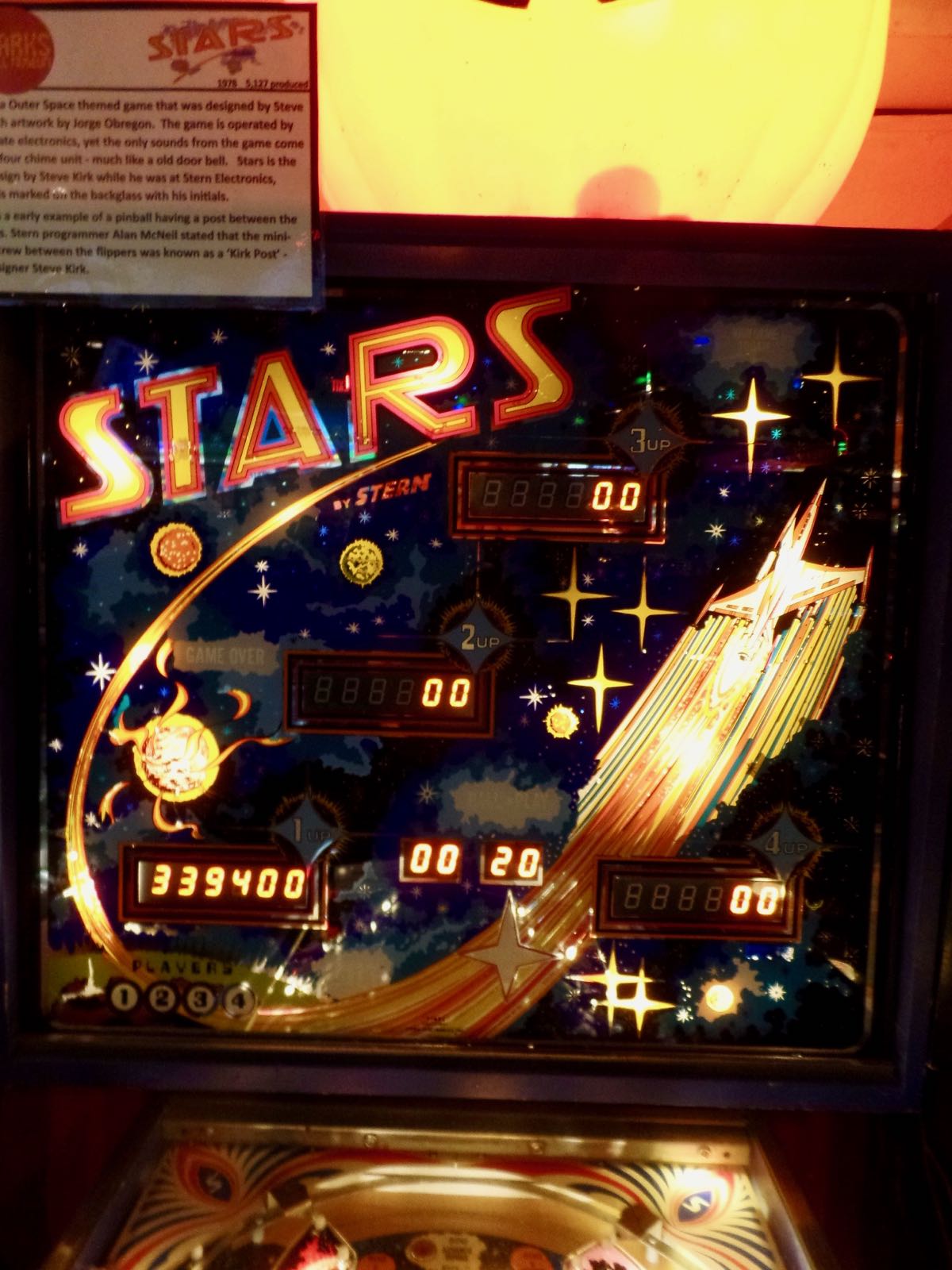 For once in my life I had a good game of Stars and you're going to see it. 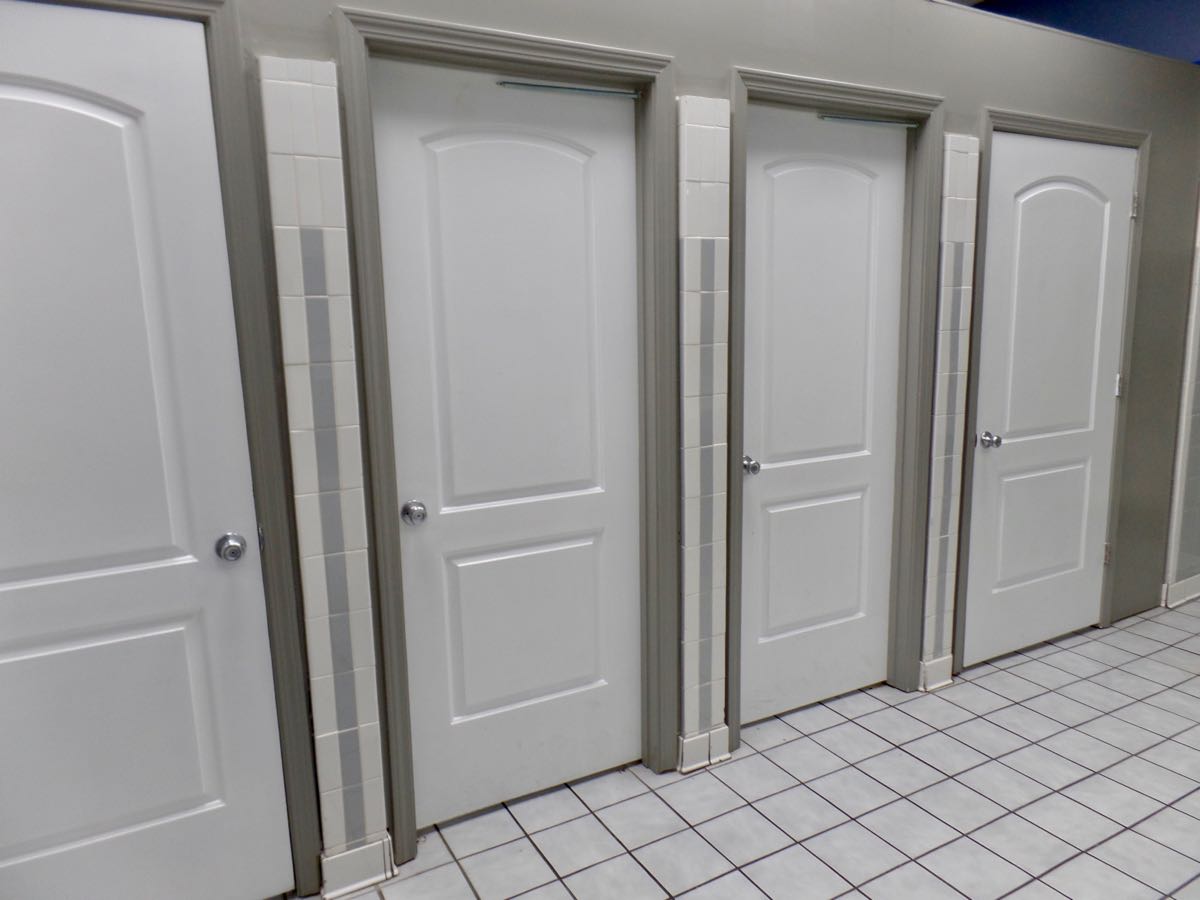 OK so I don't normally do this sort of thing but ... this a photograph inside the men's room. Since we were there last they put real actual doors on the toilet stalls because ??? ????? ?? ????? ?? ???. Meanwhile at our local pinball barcade the men's room stalls don't have doors, just shower curtains that someone steals every couple weeks anyway. 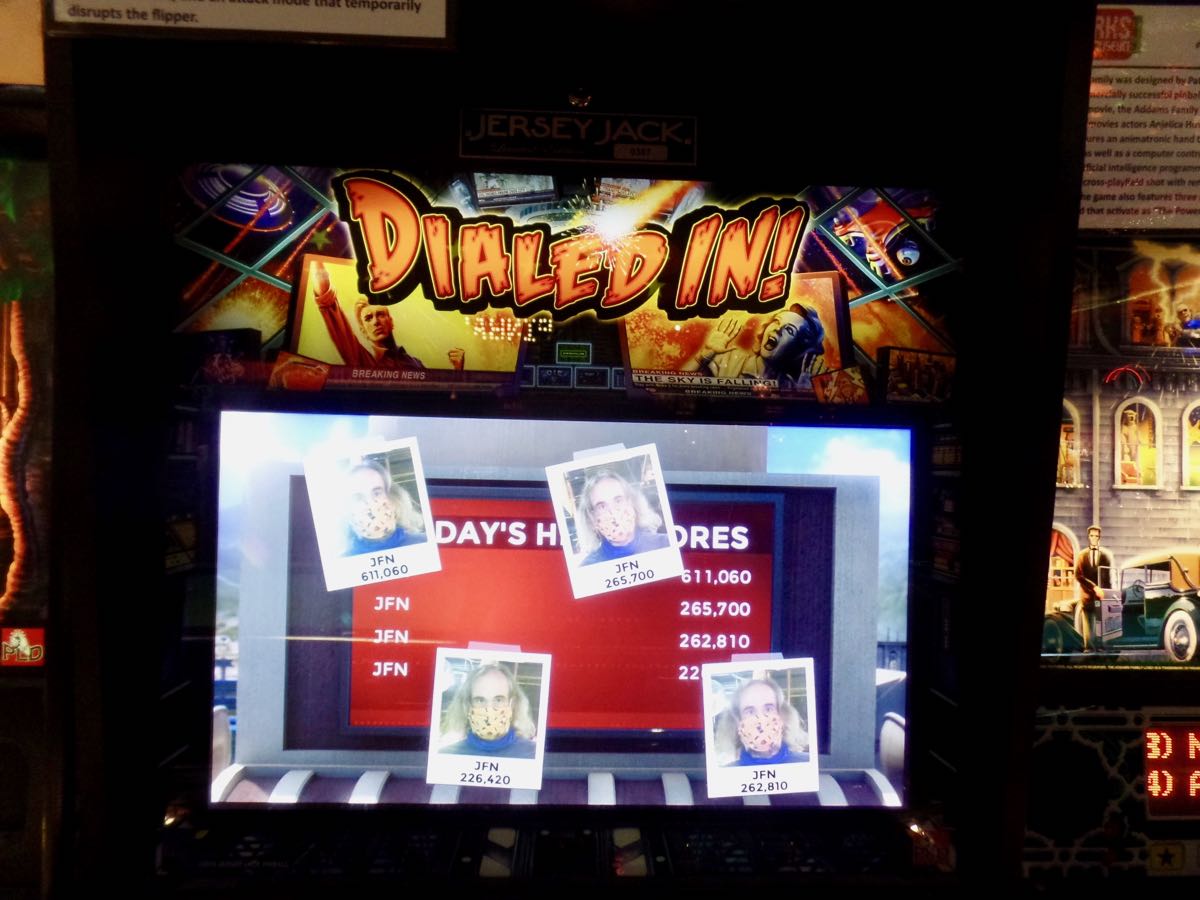 Advantage of being the only person there? I got to rule the Dialed In daily high score table. The game takes your picture, too, so you get several photos of me not showing my face. 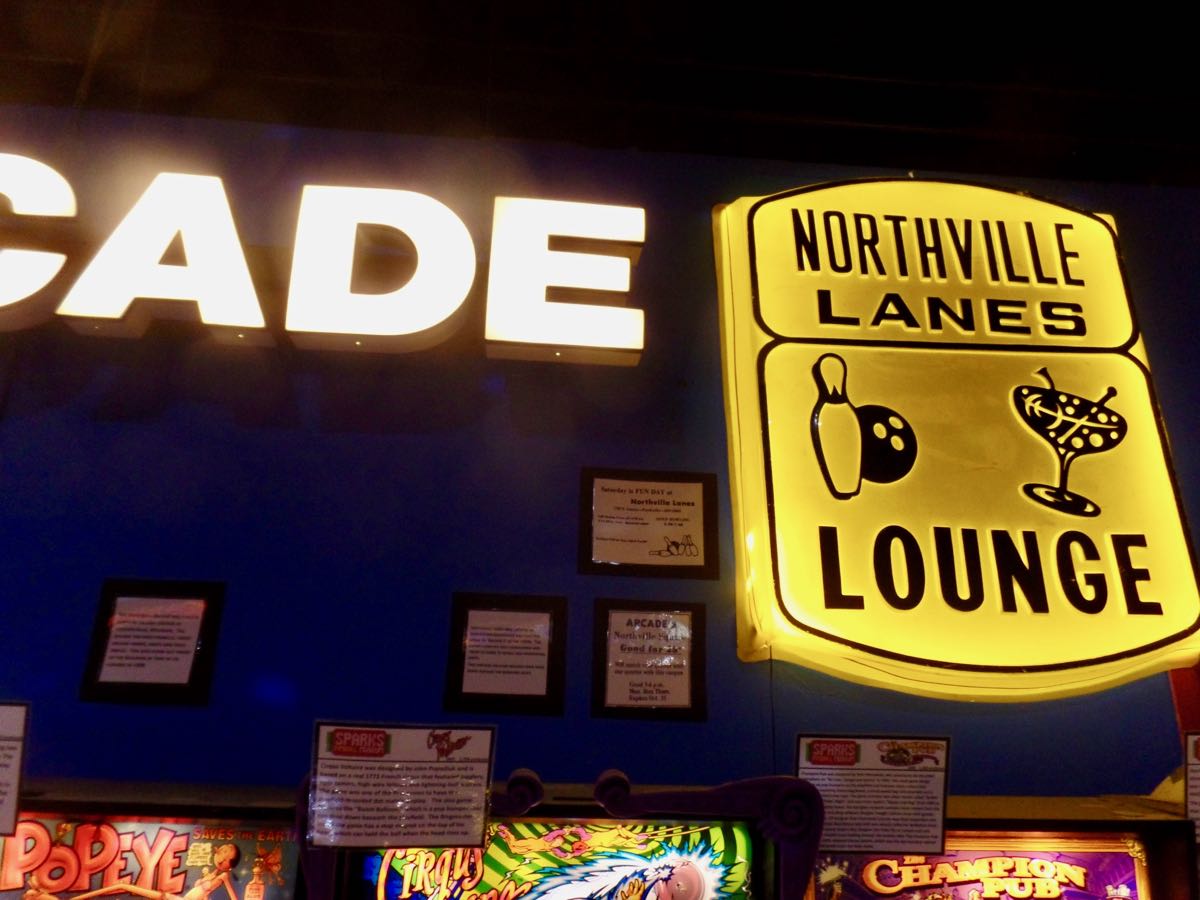 The guy who owns the games for Sparks is also a collector of signs, like this for the Northville Lanes bowling alley, and lovs sharing it off. 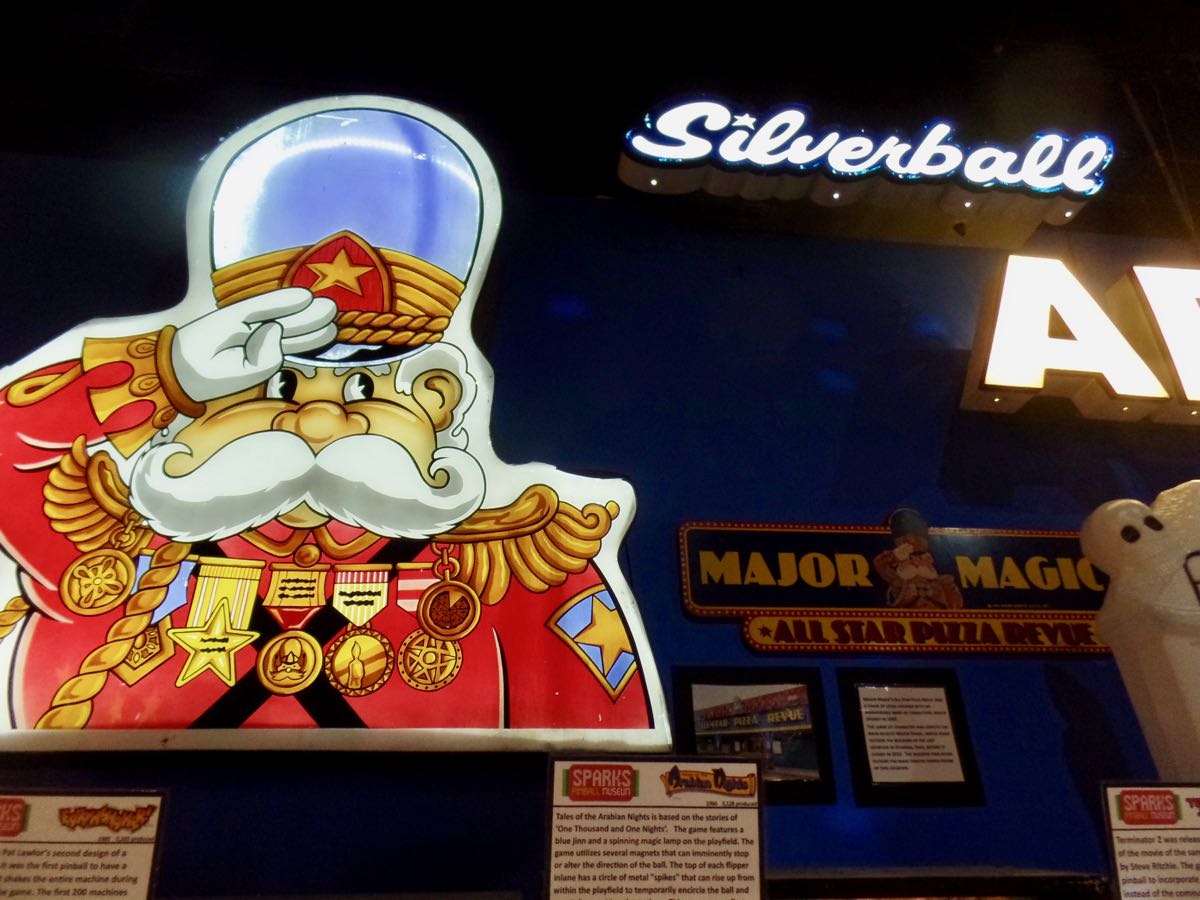 And here's a sign from Major Magic, a Chuck E Cheese competitor in the pizza-and-animatronics market. 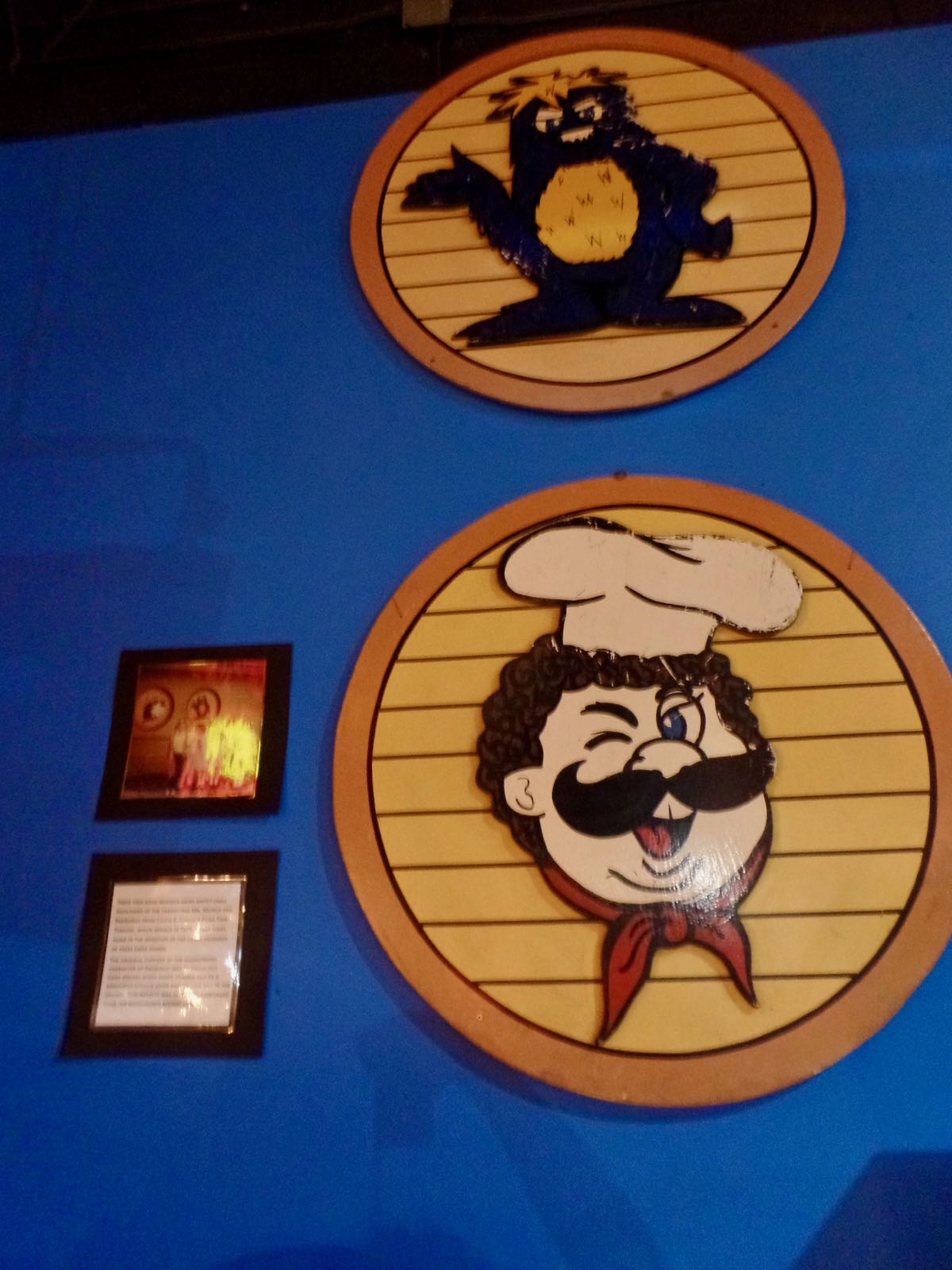 More signs of characters that I think are from the early Chuck E Cheese days. Not sure and I don't have a photo that gets the sign clearly enough to tell. (Lending the Sparks thing some legitimacy to their 'museum' claim is that most everything has a sign explaining why the thing you're looking at may be of interest, and I genuinely like all that.)

Trivia: Edmond Halley, feeling that Gerardus Mercator got too much credit for the map projection bearing that name, proposed calling it the ``nautical'' projection, in reflection of its most important use. Source: Maps and Civilization: Cartography in Culture and Society, Normal J W Thrower.

Currently Reading: Michigan History, September/October 2021. Editor Emily Allison. Finally found where the bookstore was hiding the magazine. (It was with local magazines, rather than the history/science magazines.)