Walter, you are just an echo of a world

The thing I went to, while

bunny_hugger cursed the course web site, was the Insects SIG. There are always fewer species (loosely-defined)-based gatherings than you'd think at this con, and this year was particularly dire: Insects was one of only two going on. I'm not an insect myself, of course, and I try not to make too much fuss about how the raccoon family normally interacts with the insect family. But it's always fun seeing people talk about their species choice and I want to support these activities.

It was a small group, about ten people sitting in an empty room with chairs stolen from the hallway. I don't know why there weren't any chairs in the room but it was good to know ahead of time as my panel, the Raccoons and Procyonids SIG, was the next thing scheduled for the room. Also not present was the ant guy, whose name I forget, the one with the ant fursuit and the sugar-cube-shaped backpack. He'd had to work, but his mother was there. And it was a good chat, people talking about how they came to bugs as opposed to any of the popular species. And under insects they counted some things that aren't really properly insects at all, such as spiders or the xenomorph from Alien. One person also had a house centipede main character, so I was a bit glad

bunny_hugger couldn't make it to this.

There was an hour between the end of that and the start of my Raccoons and Procyonids SIG, which I mentioned to the insects. A couple of them even came to that. Each year we have the tradition of tipping over the trash bin full of candy and such and I didn't feel like I wanted to give people something to take their face masks off for, not if I didn't have to. (About half the attendees wore face masks all the time. I'd have liked that to be higher, but these were all people who had to show proof of vaccination to get in, at least.) So instead I'd gone to the dollar store and bought party trinkets. I thought there'd be more Halloween stuff to buy, but apart from some eyeball ping-pong balls there wasn't much to have that wasn't candy or too big to fit in the bin. Lot of 'gold' coins, though. Also some cardboard glider airplanes that proved the hit of the panel, with people trying their hardest to get the things to actually glide. Amazingly, a cardboard glider that sold four-for-a-dollar wasn't all that good at gliding, but was good at inspiring hilarious attempts at gliding.

And it was an exciting year for Raccoons and Procyonids in pop culture, since among other things the movie Koati was only a week away from its release to theaters not in Michigan. (As far as I can tell it's not showing anywhere closer than Chicago.) I'd been tempted to mention Koati during the Insects SIG too, since I could have sworn one of the main characters was a butterfly, but I felt just unsure enough to hold back. There is a butterfly as one of the main characters, though. Also a frog so if there were an amphibians SIG I could've had a trifecta. Also got to mention Encanto, which Disney's releasing next month and is therefore likely to actually be seeable. There's coatis among the background animals in the trailers.

The Raccoons and Procyonids SIG was an evening SIG, unusual for me. We were about on time for dinner and decided to turn in our coupons for a sponsors' lounge meal. That's how we learned the pizza was both disappointing and somehow more wonderful than we expected, because of how much it felt like elementary-school industrial pizza. We also had a little beer and cider, me downing one whole plastic cup of something that left me remembering how much of a lightweight I am at drinking. It would be embarrassing except that I don't actually dislike being completely out of synch with the ``being drunk means you're having a good time'' pose that the convention affects.

We played a bit of pinball,

bunny_hugger getting frustrated that she couldn't get a good game together on Earthshaker. She never had a bad game either, though, whereas I put up at least one that didn't get past a half-million points. (You can get 300,000 points just for plunging the ball right, which I couldn't do reliably either.) We also got quite fascinated with this shooting gallery game we saw people playing. Besides shooting the moving targets it had a final challenge: shoot a coffee mug. If you do, the mug flies apart, a stunning effect, especially as the mug reassembles for the next round. We'd watch this a good bit and try to work out how they do that. The answer turns out to be not what either of us thought, but it was at least along the lines of my best guess.

As she went back to the room for class stuff, and curse the time sink that was becoming, I ended up hanging out near the hotel piano not quite in any convention space. Several people were playing, mostly ``Bohemian Rhapsody'' and getting stopped by their inability to figure how the chords go at the ``Thunderbolt-and-lightning/very-very-frightening/me'' part. This including the person who showed how to handle, like, the ``little high, little low'' bits (the left hand crosses over the right, to play the higher notes, which felt illicit to watch). One guy pulled up his phone to get the sheet music and looked at the chords there, with about sixteen chords in five different beamed notes starting at different moments in one bar and said, ``What the [ explective ]''.

It was getting near midnight and

bunny_hugger used the time to take her daily walk. She'd come to kick herself for this, because it ate up time when she might have been at the dance, as I was. It turns out there would not be a Dead Dog Dance, on Sunday after the closing ceremonies, cutting several hours out of when she might have suited or done something to take a bit of the sting of the convention's close off.

For this last dance of the convention she wore a long-lost t-shirt. It's one that shows a white rabbit, seen from the side ... except that under black light, you see its skeleton, including sharp pointy fangs in the rabbit's mouth. You see the appeal for devilbunnies. The shirt had disappeared after a convention --- I want to Morphicon --- several years ago and she mourned its loss, supposing it to have been left in a hotel room or worse, since it's long-since discontinued, stolen. It tured out at the bottom of one of our well-searched closets and this could be its happy return to use.

We got to bed pretty near 3 am, trusting that it wouldn't be too catastrophic getting enough sleep and then cleaning out our hotel room by the noon checkout time. 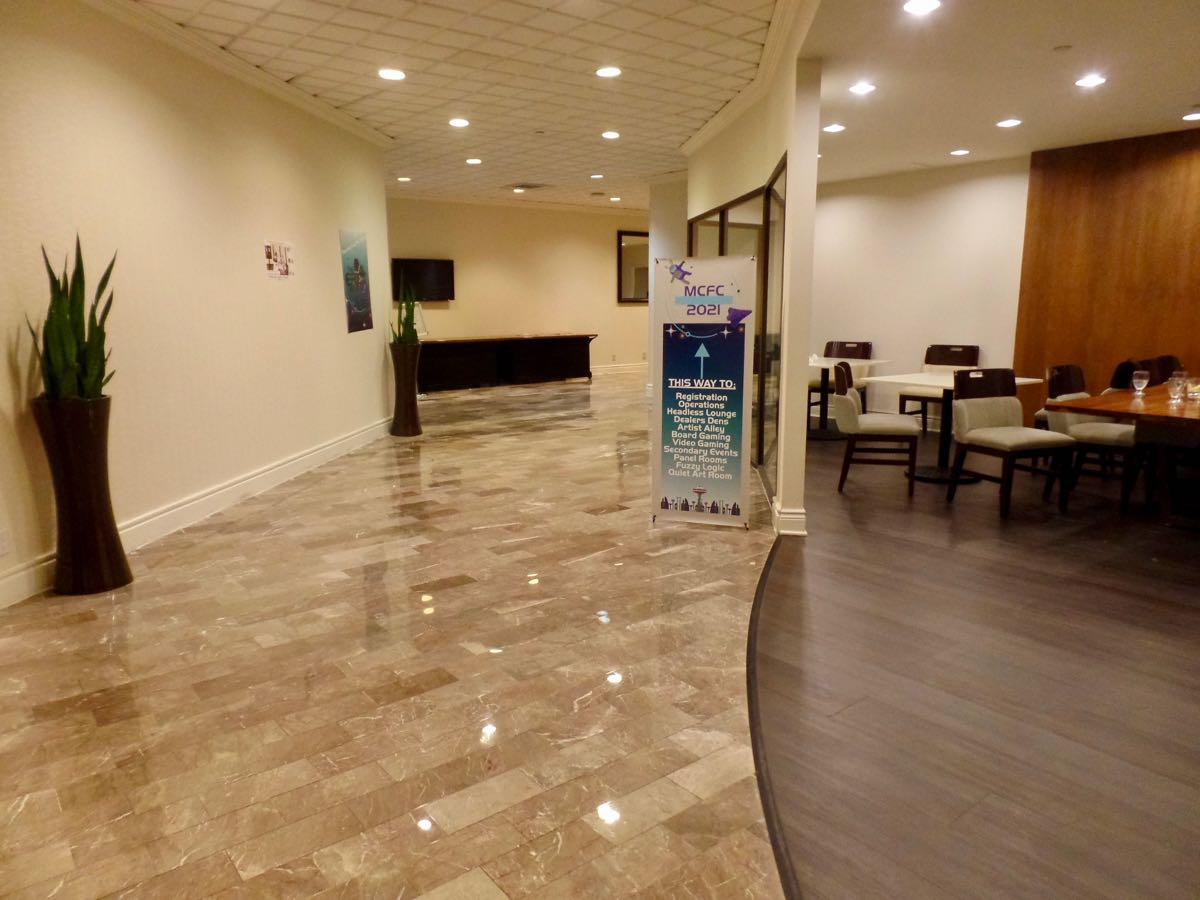 And here's one of the new standee signs for this year, showing that ... pretty much everything is just down this corridor. 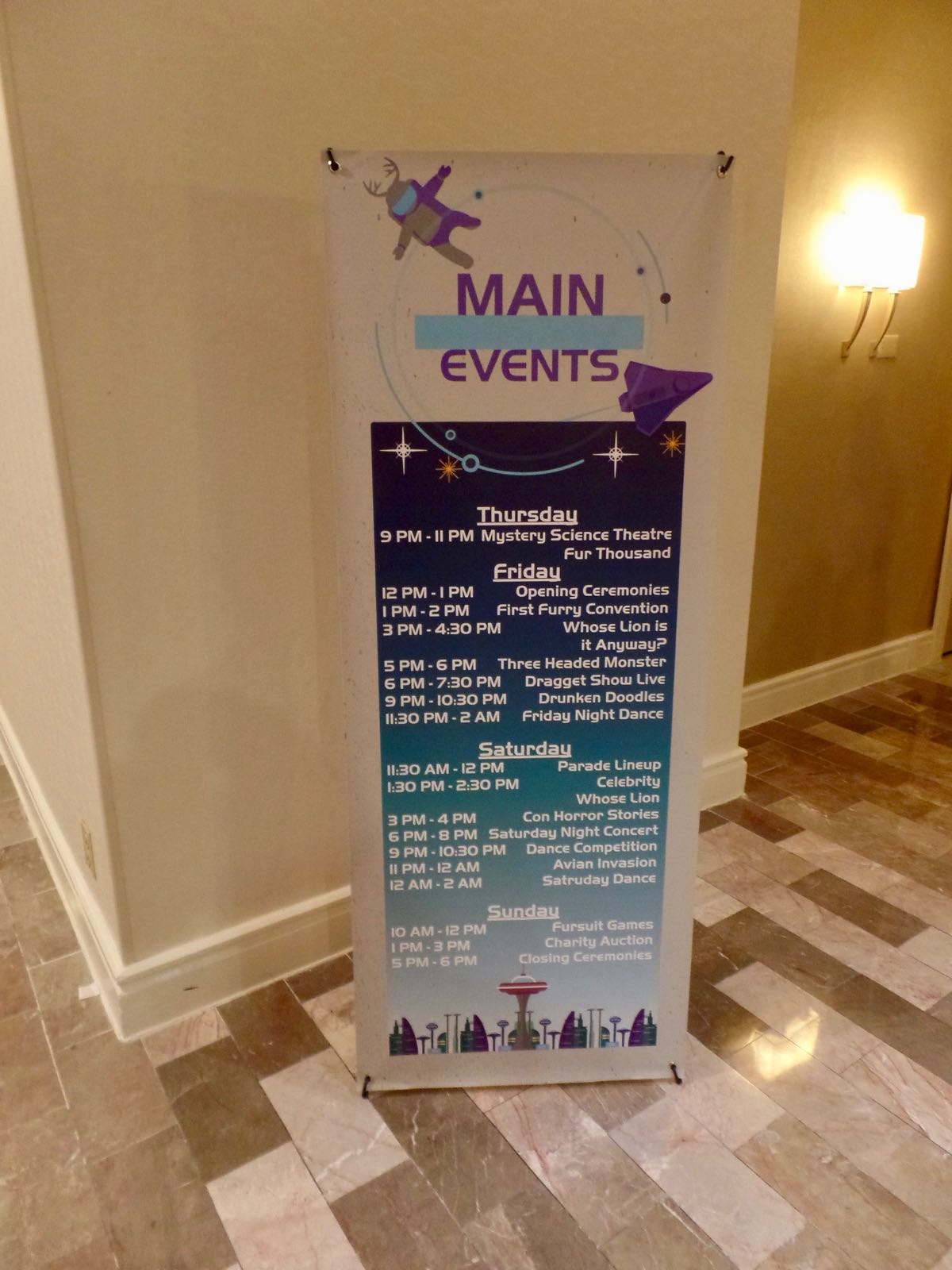 Standee explaining what the events in the main ballroom all weekend were. I'm glad we didn't miss the Satruday Dance! 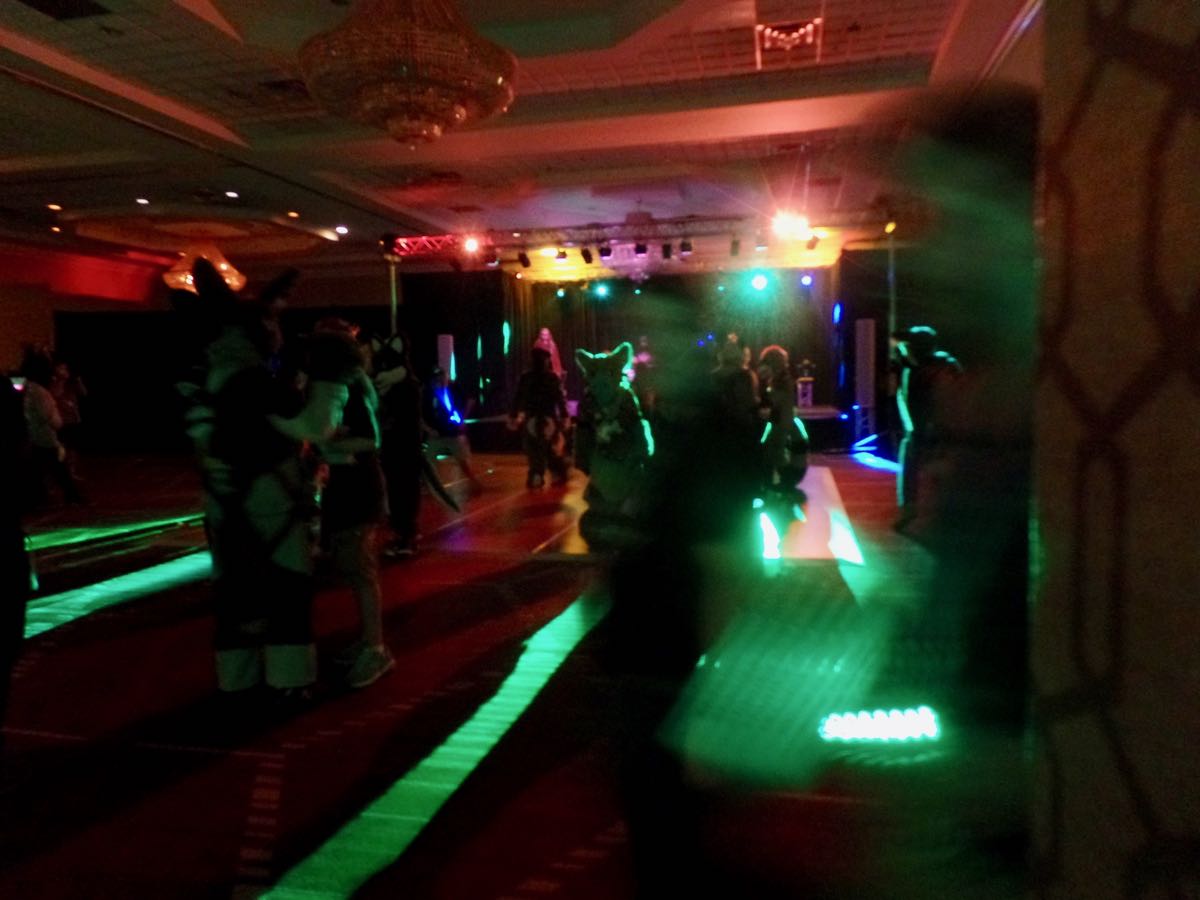 Here's the Friday dance, my first dance photo in over two years now. 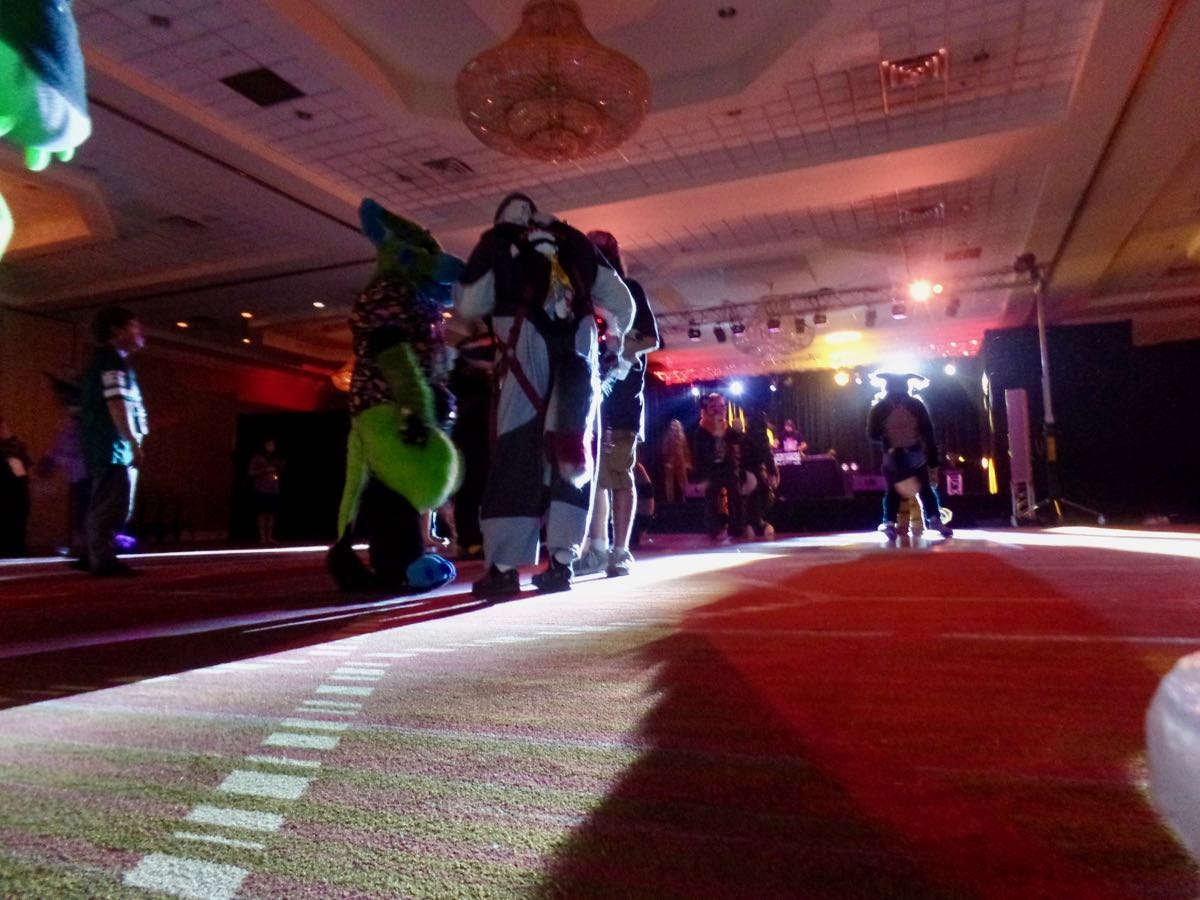 I kneeled down to take some from-the-floor photos and someone came over to ask if I was all right. I was, apart from the struggle of getting my knees to go along with standing back up. 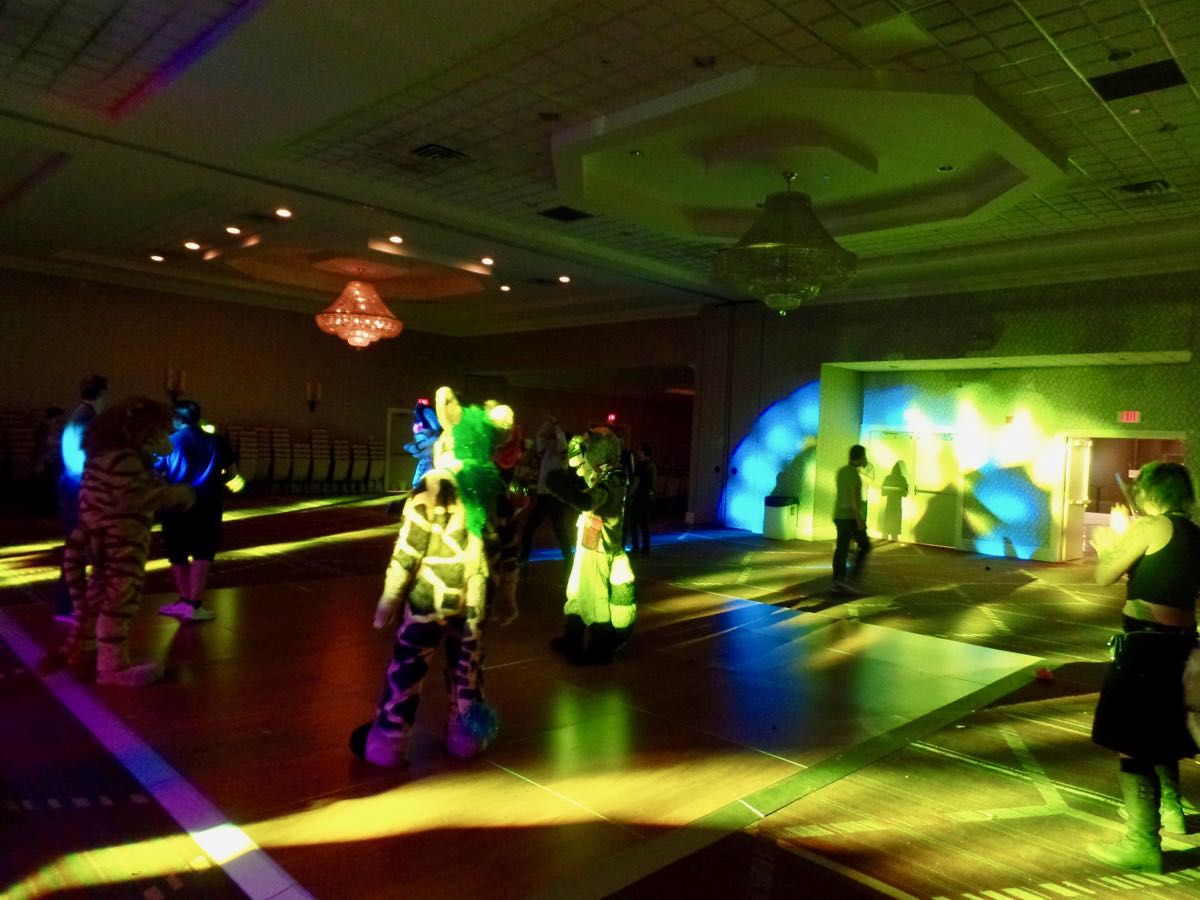 Some of the later moments of the dance, when the giraffes were out. 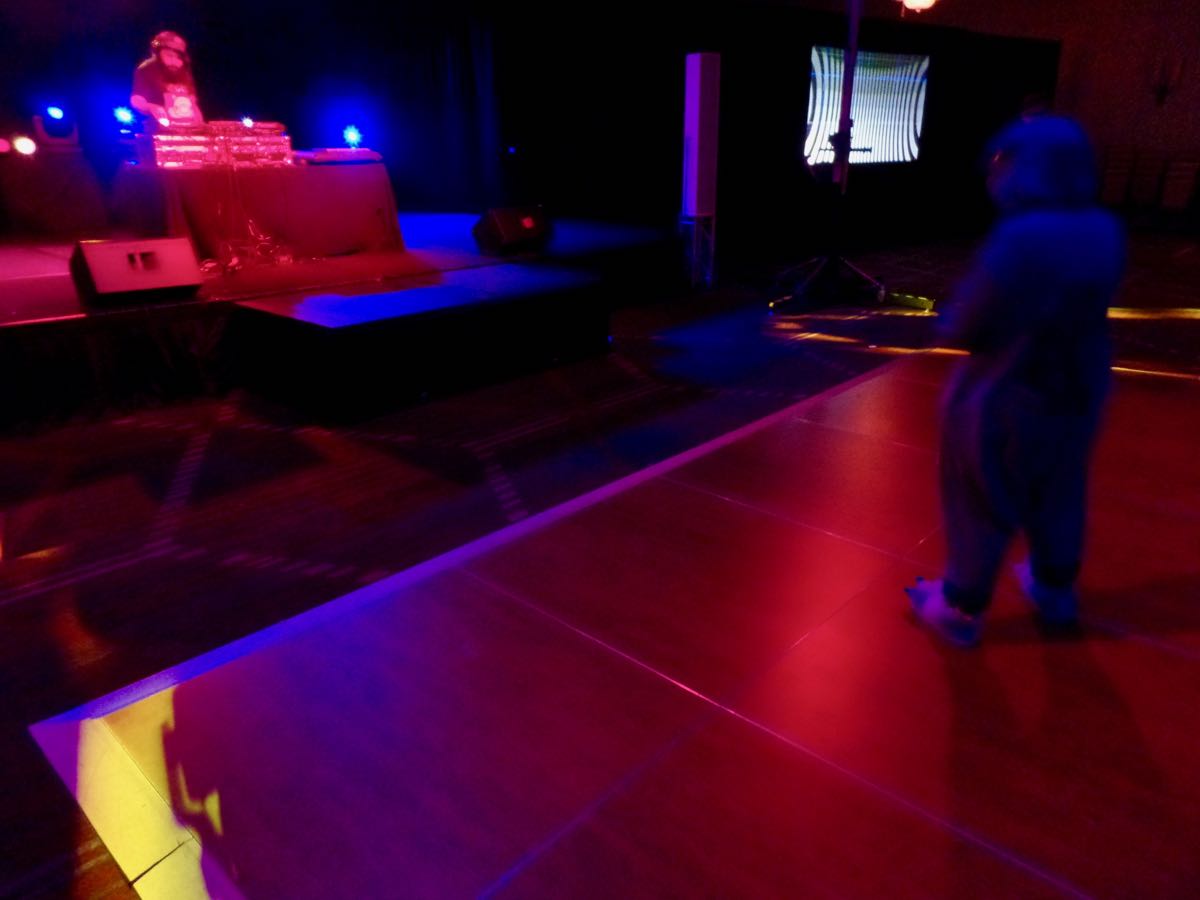 bunny_hugger as a detailed Stitch!

Trivia: In 1922 New Orleans, a city of 450,000 people, had no bridges across the Mississippi River or Lake Pontchartrain; the only exit during flooding was by rail, which would be unusable in heavy floods. Source: Rising Tide: The Great Mississippi Flood of 1927 and How It Changed America, John M Barry.

Currently Reading: Lost Popeye Volume 14: The Islands of Sunk Sun Act III, Tom Sims, Bela Zaboly. Editor Stephanie Noelle. This story ... is just ... a shambles. Like, yes, Popeye stories always end up being a mess, but this reads like they lost their notes about what the story was even supposed to be about. In the end I had no idea why Popeye was appointed as ambassador to the Islands of Sunk Sun or why the King was this toddler who looked like Swee'Pea With A Lisp and even whether any bad guys were in the story or if it was all a bunch of messing around.