If you saw me now you wouldn't even know my name

Sunday we figured to sleep in to 11:00 and I almost got there. I was worried about not having enough time to pack and load the car. I also did something not-quite-unprecedented, in using the hotel's hair dryer. Since I stopped cutting my hair I've quite liked how much volume I have, but it also takes my hair upwards of two days to dry out again. Mostly that's fine, I just towel it as best I can and then towel it again and brush it again an hour or two after I get up. Wouldn't have the chance here, so I tried the hair dryer (Saturday and Sunday) and that was pretty good, really. Might do it more, except that hotel hair dryers are always better than the ones you can get as a civilian.

We got everything loaded in time, though, more or less. And went looking for breakfast at the Tim Horton's across the highway. Not expected, though we should have: so was everybody else in Washtenaw County. Also not expected: that they'd be out of the pumpkin spice coffee that

bunny_hugger wanted. I think our first choice for something to eat was also out, but don't remember what it was. We ended up both getting grilled-cheese paninis and chips. We went back to the hotel, to the open picnic tables behind the hotel where the fursuit parade ended, where we expected to see other convention-goers and did not.

We spent time walking around the convention, hoping to catch anyone, before the second panel that I was running. Also one that I had forgotten about until

bunny_hugger spotted it on the schedule on Thursday. This was Mucks, IRC, and Other Text-Based Furry Life, or something with a clumsy name like that. This was mostly a talk about, well, what we did to be furry in the 90s, which was mostly by text-based Internet methods. Understand, back in those days, there were three conventions and one of them (ConFurence East) was cancelled. To add to the oddness, someone set up a video camera for what I hope were legitimate purposes, so I had the extra little distraction of hoping I was staying in frame, or at least close to it. (They'd left, after setting up the camera, so I couldn't trust them to follow my motion.)

It was an oddly well-attended panel, considering it was one of the few things to have an actual counter-programming: halfway through the Michigan Furs Meet and Greet was to start, across the hall. But no great number of people left, and a couple even drifted in over the course of the hour. I used the panel to give out more of the trinkets left over from the Raccoons and Procyonids SIG. Also to talk a lot about SpinDizzy Muck, which I run, and that I demonstrated by passing out a not-quite-log of what it's like to connect and come out to the central area and say hi to folks and look around. People were incredibly impressed with the ASCII art of the welcome screen. Apparently we need more of that, if it can be done without being too cruel to people using screen-to-voice readers.

bunny_hugger would apologize over and over about her ``interrupting'' my talk, which is silly. I had only the barest idea of what I was going to talk about and grew ever more fearful of what I'd say as the room filled. Having her interject with comments about 90s furry, and mucks, and IRC (which she knows in thousands of times better depth than I do), and Usenet and all, gave my talk so much more shape than it could ever have had unaided. And it kept the thing from being me screaming through my mask for an hour; a dialogue is always better than a monologue. This ended up being great fun.

Also a delight: just before my panel started,

bunny_hugger had gone off to the dealers rooms (split into three, unavoidable because of the event space layout of the hotel) to take one last look around, in case there were anything she wanted in there. She did, and she would come to our panel with something wonderful.

Now in photos let's zip back to Saturday and the end of the fursuit parade. 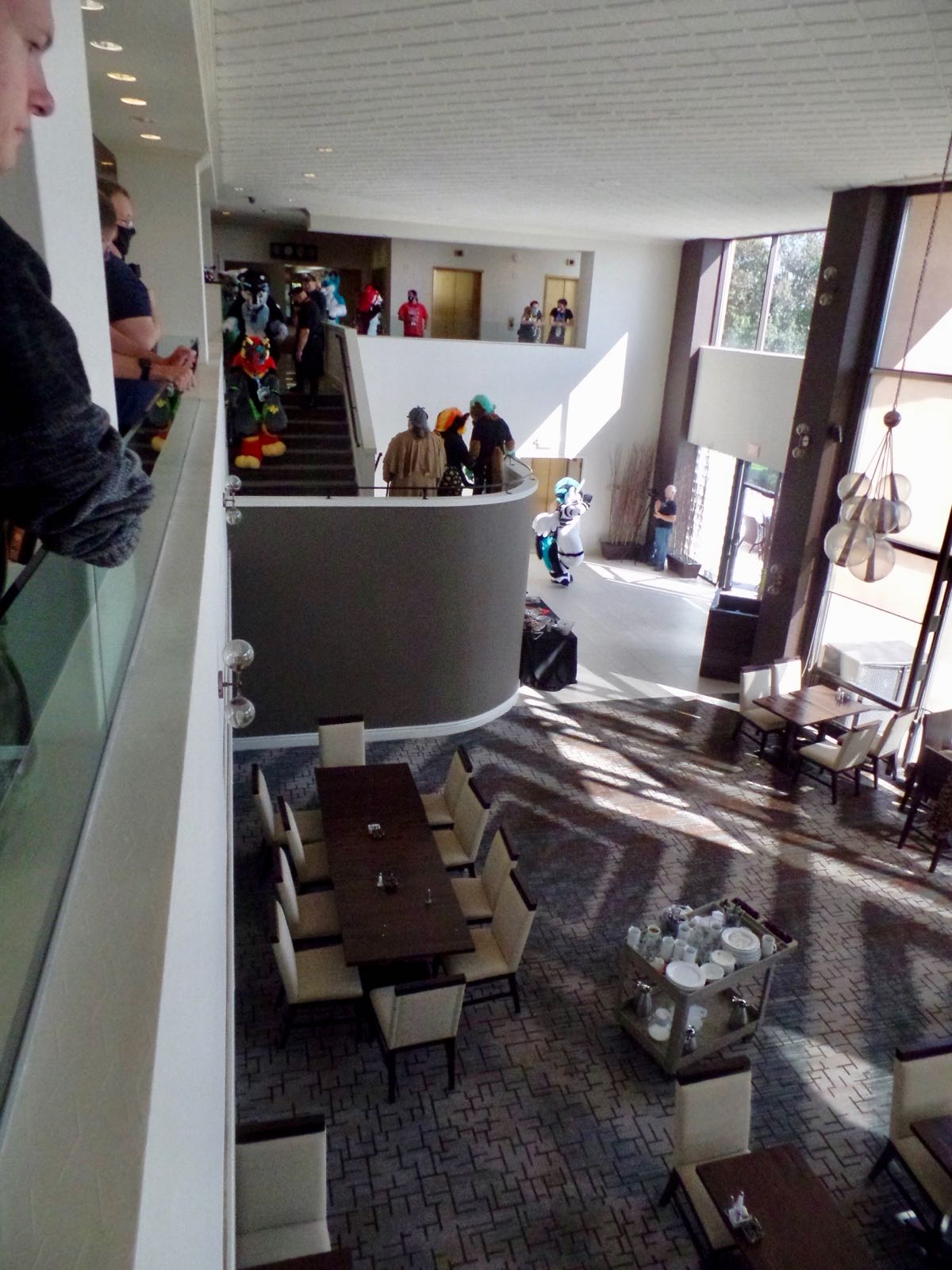 The stairwell leading down and to the outdoors. I suppose there weren't many options for the parade route but still, stairs, yipes. The lower level was also a restaurant we never saw open. Probably it offered breakfast. 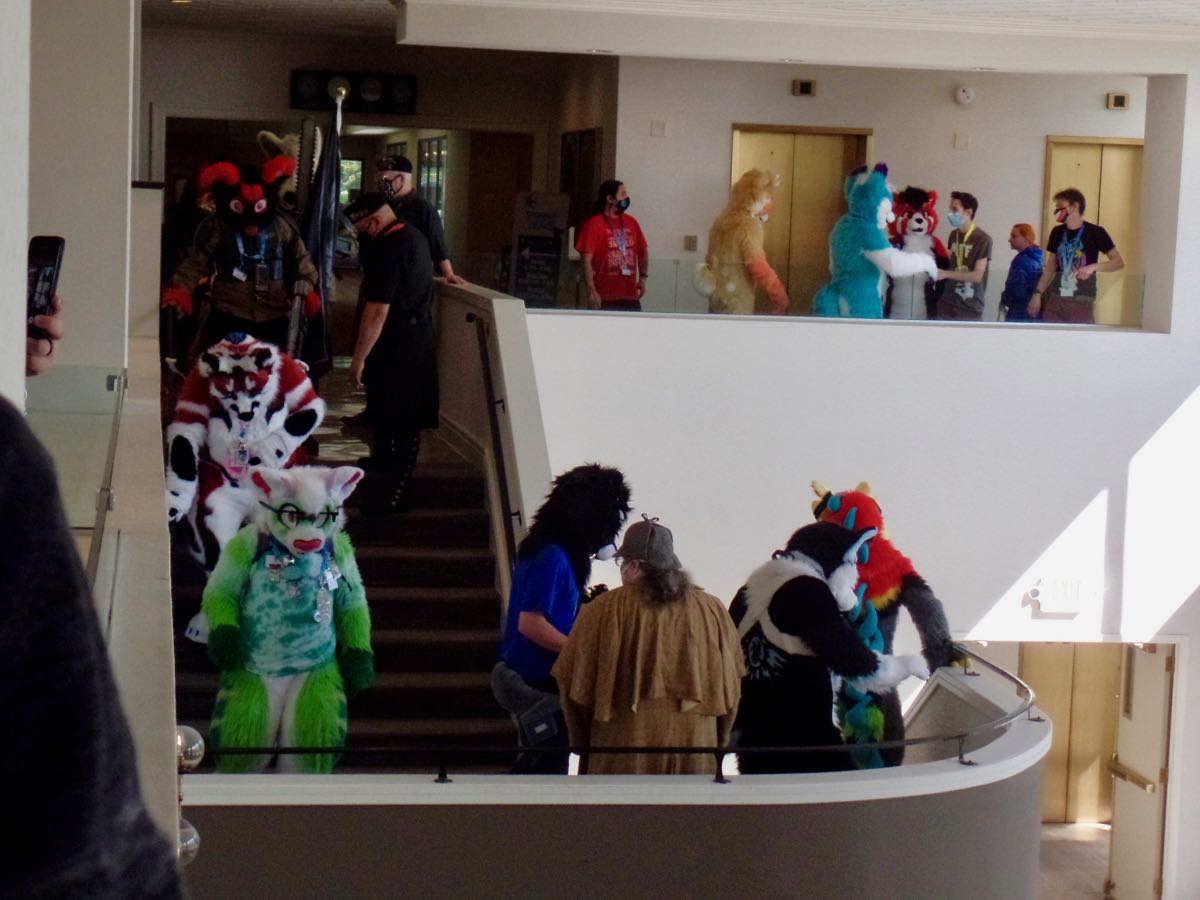 Fursuit parade trying its best not to collapse down the stairs. 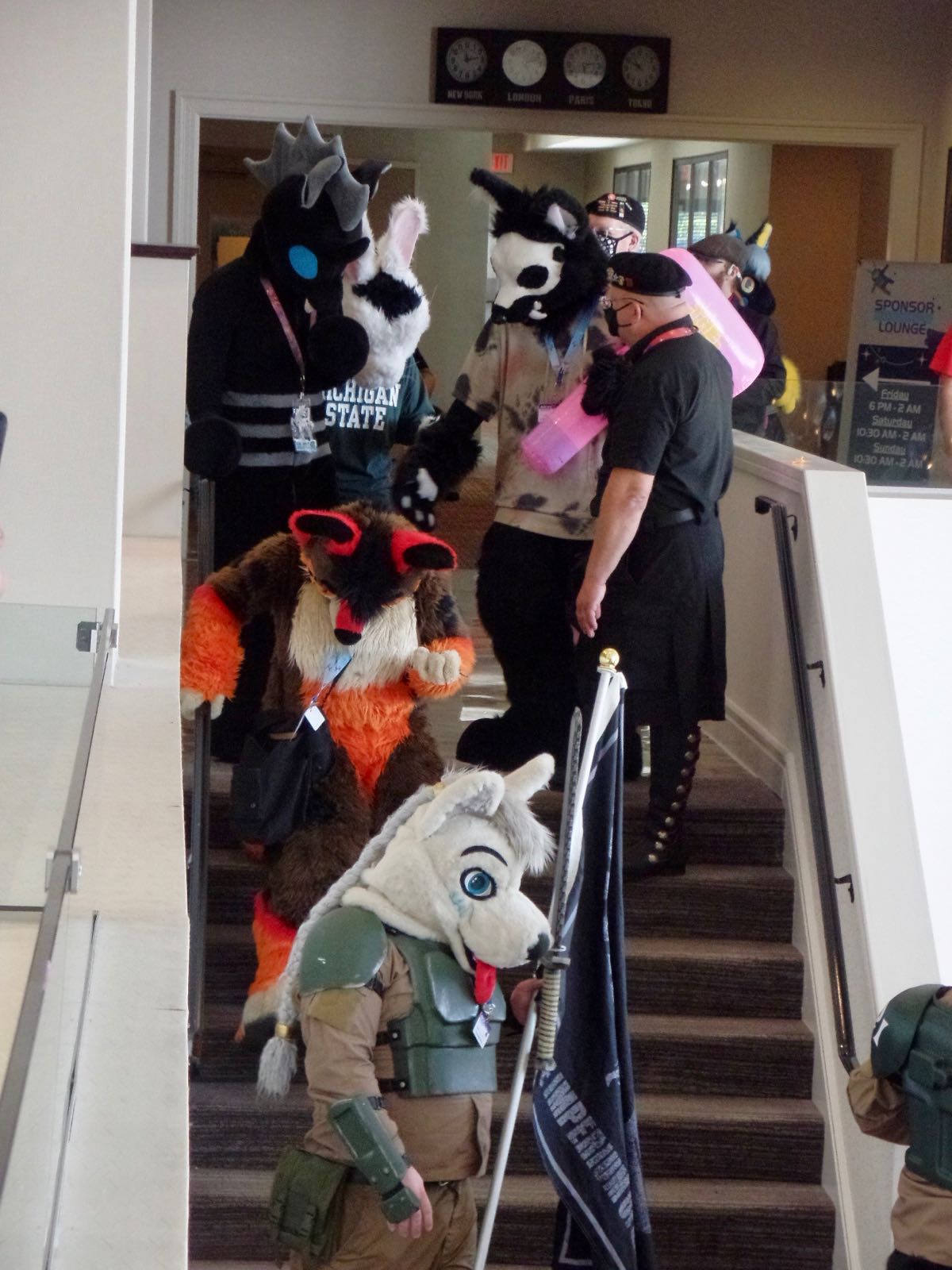 bunny_hugger getting to the edge of the stairs, and not happy about it at all. 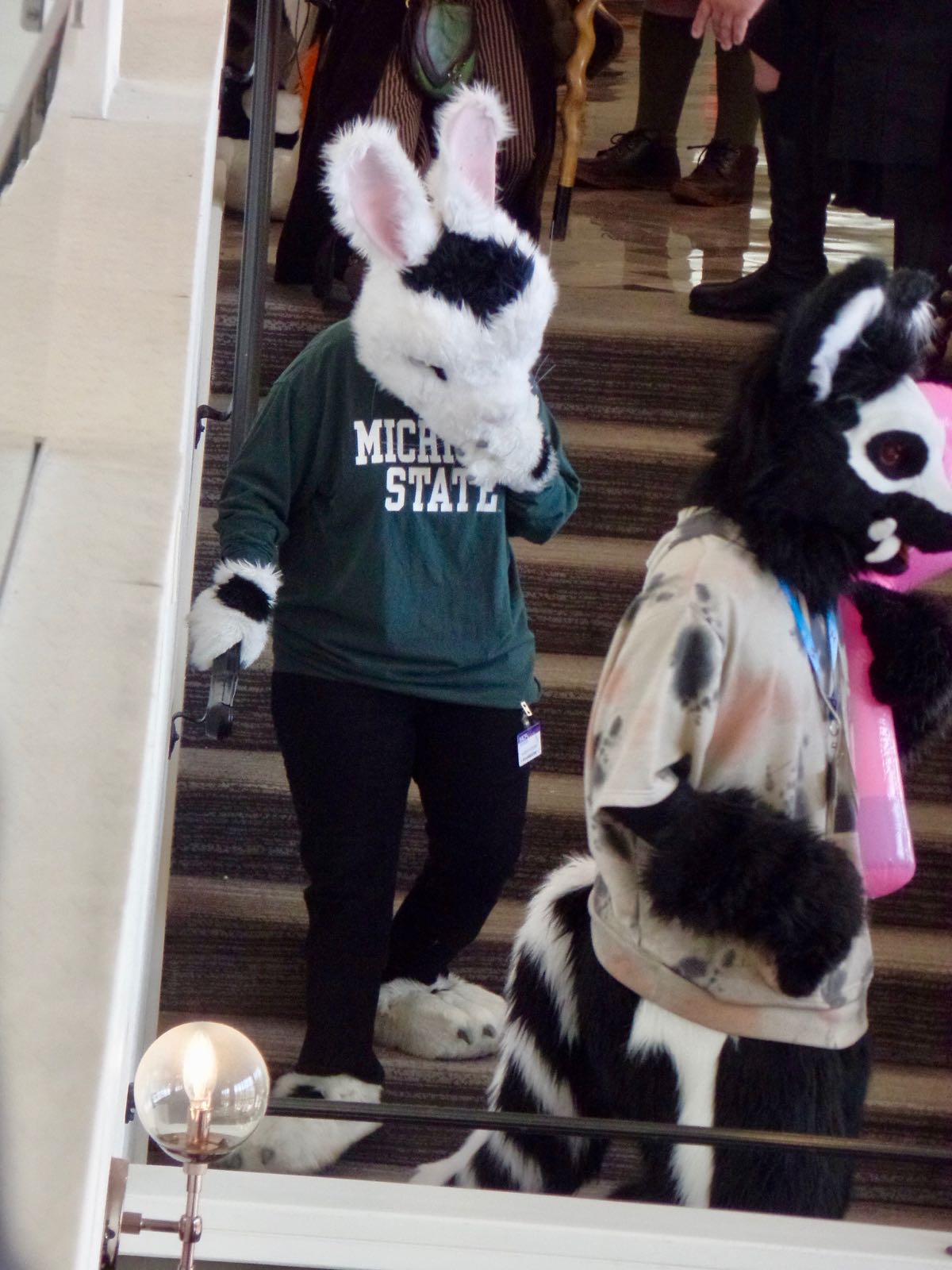 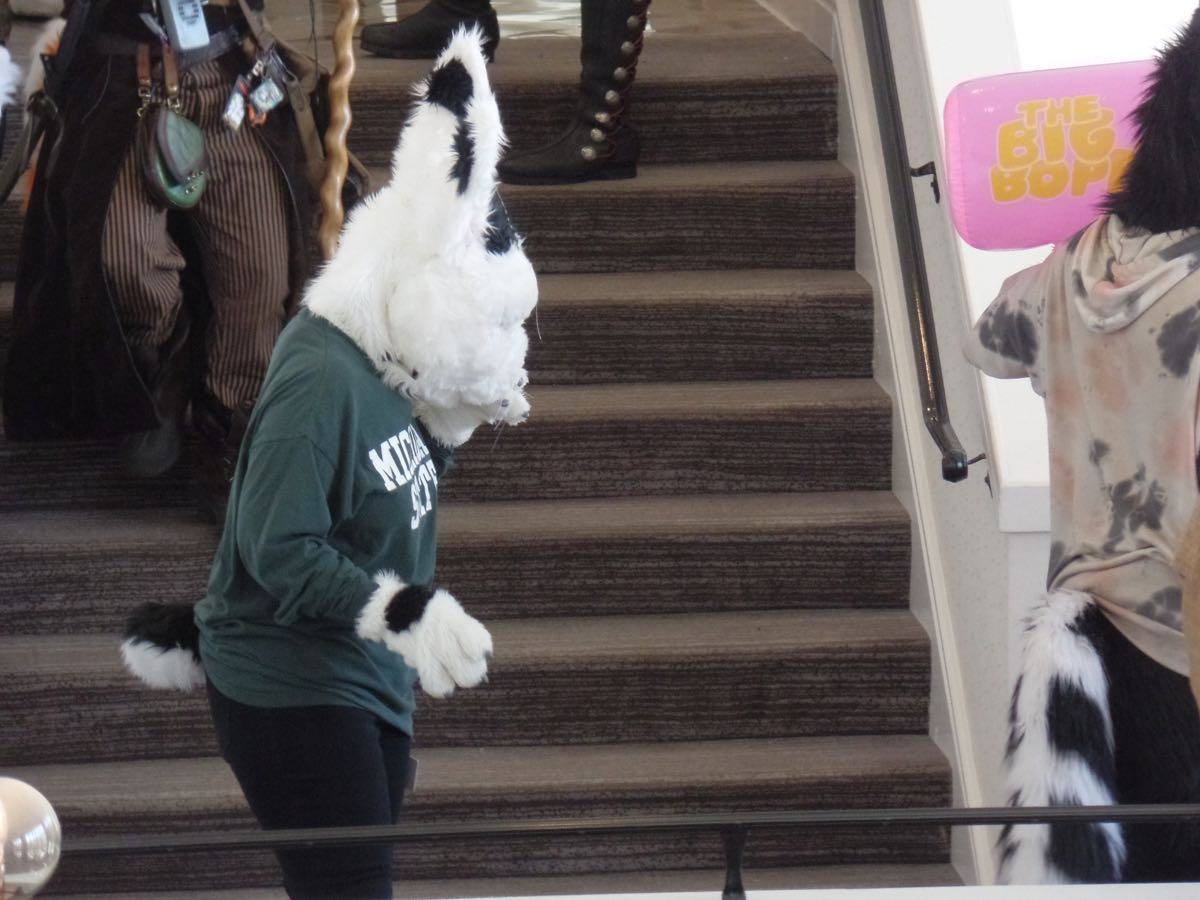 This part's a little better but she's still not happy. 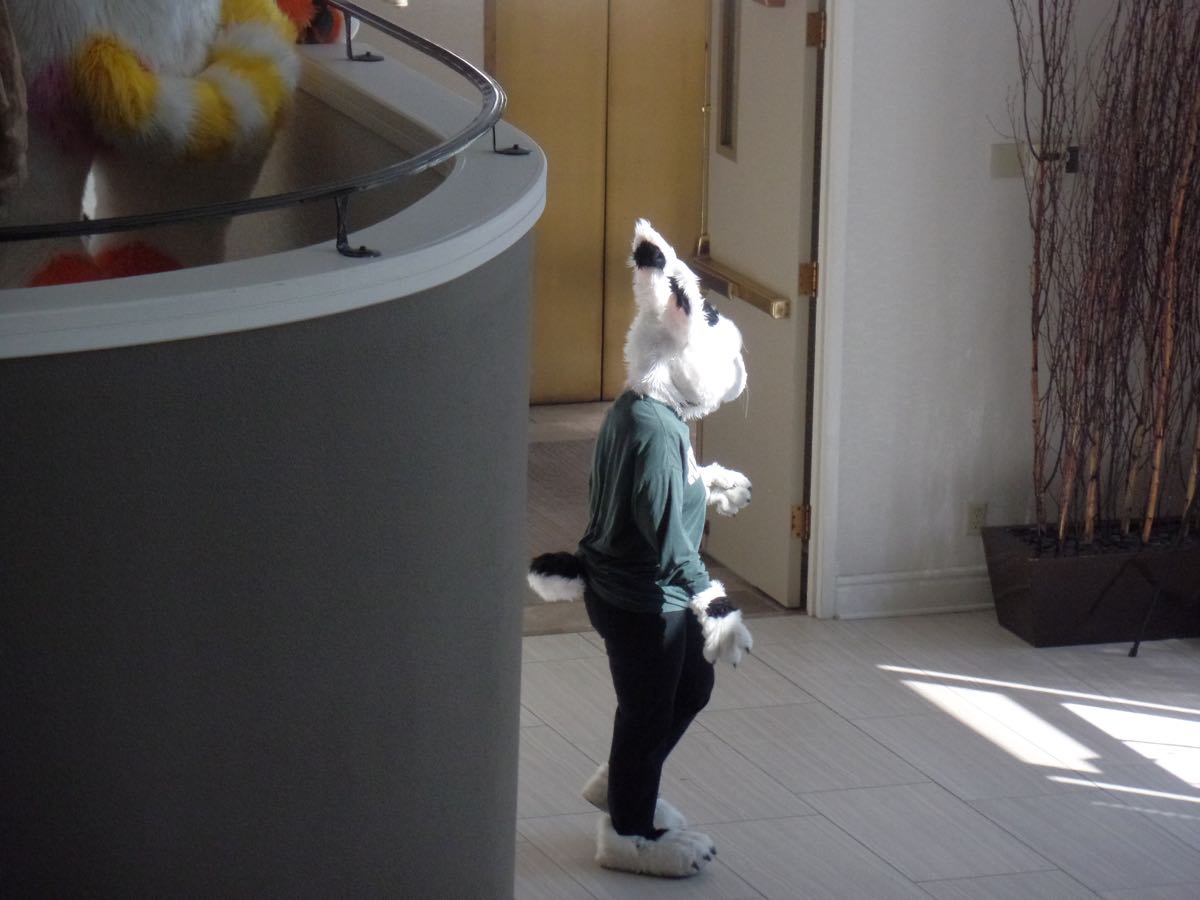 Safely to the ground! Now it's just a challenge of finding the door.

Trivia: In 1641 Samuel Pepys recorded paying £4 5s for a beaver hat. This was about three months' pay for an average laborer. Source: The Island at the Centre of the World: The Untold Story of the Founding of New York, Russell Shorto.

Currently Reading: Screwball! The Cartoonists Who Made the Funnies Funny, Paul C Tumey. A birthday present, finally being read.