And you'll have nothing more to say

How about some other stressors of life? Well, I finally roused my energies to apply for unemployment. I know, I should have done it faster, but in the immediate shock of the layoff, and dealing with fourteen calls a day about the title to my Scion, I did not have the spoons.

Michigan lets you fill out for this online. To connect I had to use this general Michigan public services account. I had one, thanks to my first attempt at getting a title, when I thought it might be held by the state of Michigan. What I could not remember was my password. I have got, written down, a memory prompt, which reminded me what it was supposed to be. I've taken to using phrases for accounts I rarely need to access because I am more likely to remember (say) a line of Wonder Twins dialogue than I am to remember ``2e2%f60e&ec'' fifteen months later. What I did not have noted were how to handle spaces and whether it was intercapped or just run together. After a few attempts I got locked out. So I hit the ``lost password'' button and got told I still had to wait a half-hour before doing that either. So I waited for the evening, tried ``lost password'' and went through re-setting. This time I figured to use the phrase and make note of what seemed the obvious way, to me, to use spaces and capitalization rules. It told me I could not re-use any of the last three passwords.

Still, this was all well-worth it, of course, because I filled in the information about my income and the circumstances of my unemployment and they got back with their determination: since I had earned money in Michigan in only one of the last five quarters, and not too much of that, I was ineligible for unemployment insurance and would be getting $0.00 per week.

So. I planned to appeal since if I haven't been earning money in Michigan what have I been paying Michigan income tax for? And it's quite possible my company never got around to paying Michigan unemployment insurance and I should be applying to New Jersey instead. (My father was enthusiastic about this, as when he was on unemployment his coverage was pretty good, unsettlingly close to my working pay.) Still, I found and scanned last year's W-2, which would at least show I had income that they don't know about last year (as a direct-deposit recipient I haven't seen a paystub in years). And before I could file my appeal, they sent me a new determination. They ruled that I had made some money in Michigan, in the second and third quarter of 2021, and therefore I was entitled to some pay after all.

Not enough; their third-quarter salary was about right but the second-quarter wasn't, and they still didn't list anything for the three quarters before that. So I still need them to consider my appeal. Also, starting next week, I need to check in biweekly to attest that I am too seeking work. This either through their web site or through their automated phone system, called MARVIN. MARVIN I have to call during a specified set of hours, or else during the make-up hours at the end of the week. Have to say the web site, that I can use anytime, seems easier. I don't know that it has a name.

I'm also not sure it wouldn't be wise to toss an unemployment application to New Jersey too, considering.

Let's have some more looking around Saturday pictures at Motor City Furry Con. 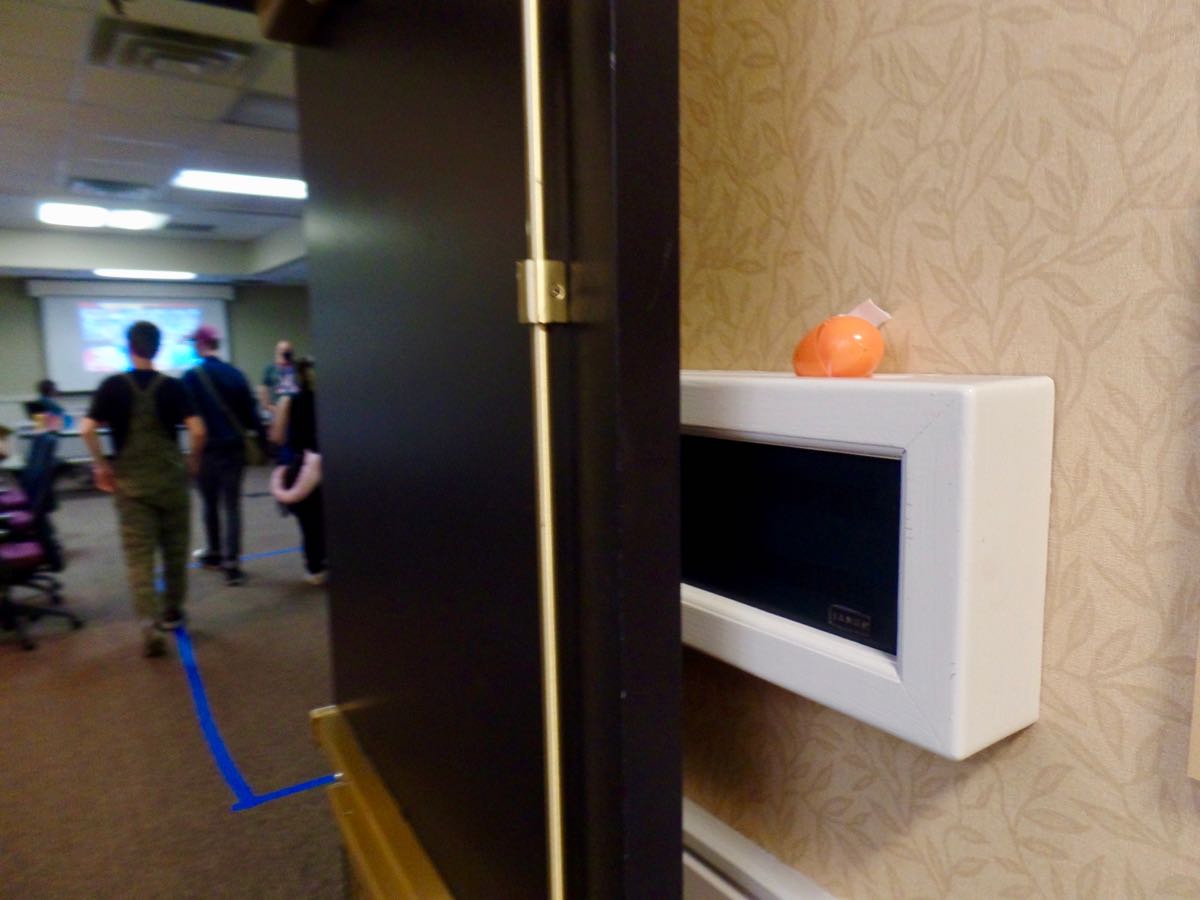 Egg! Whoever it was hides plastic eggs with little treasures inside was at it again. This is an egg I found while

bunny_hugger was in our room cursing web sites. She wanted to find one too but I'm not sure she ever had the chance. 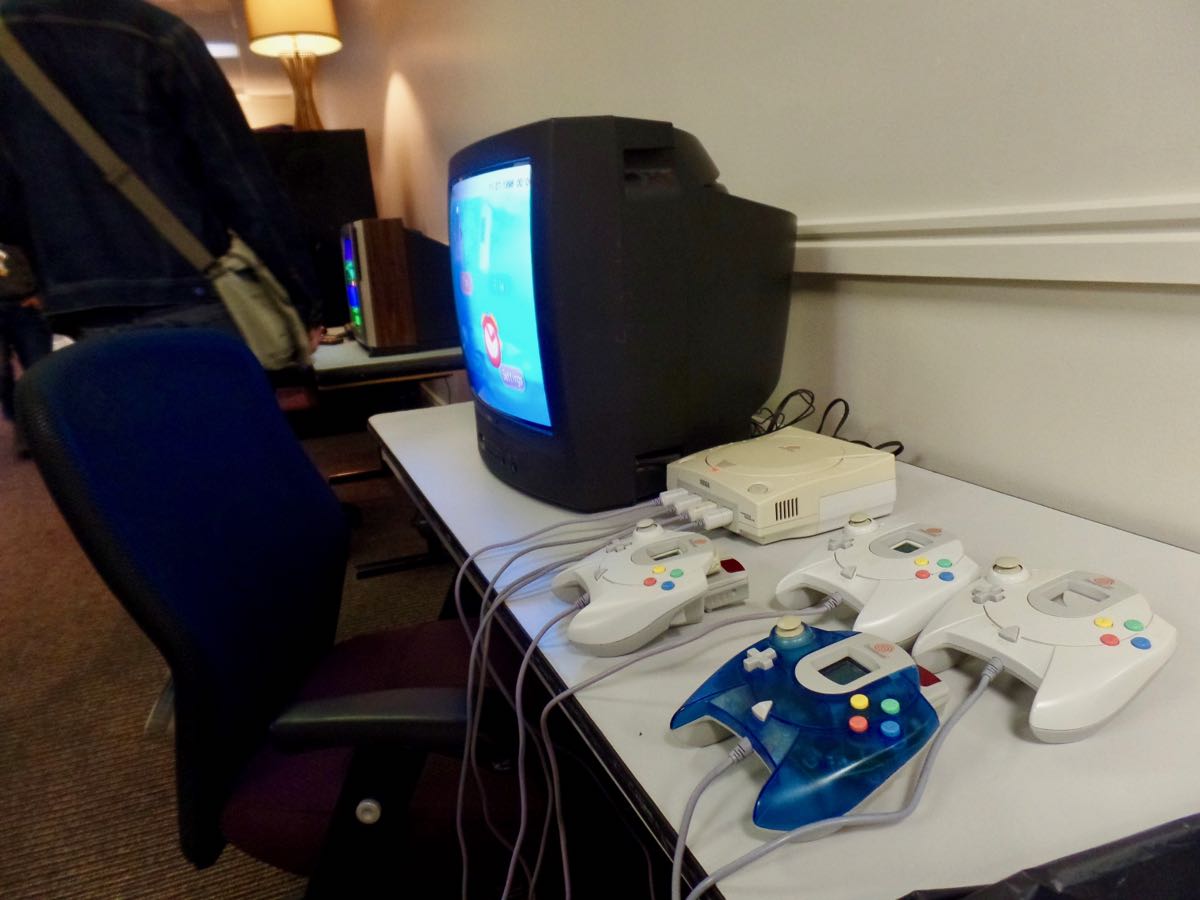 Oh the arcade room had non-pinball stuff too. Here's a variety of controllers for a thingy on which you could play games like video game or other video game. 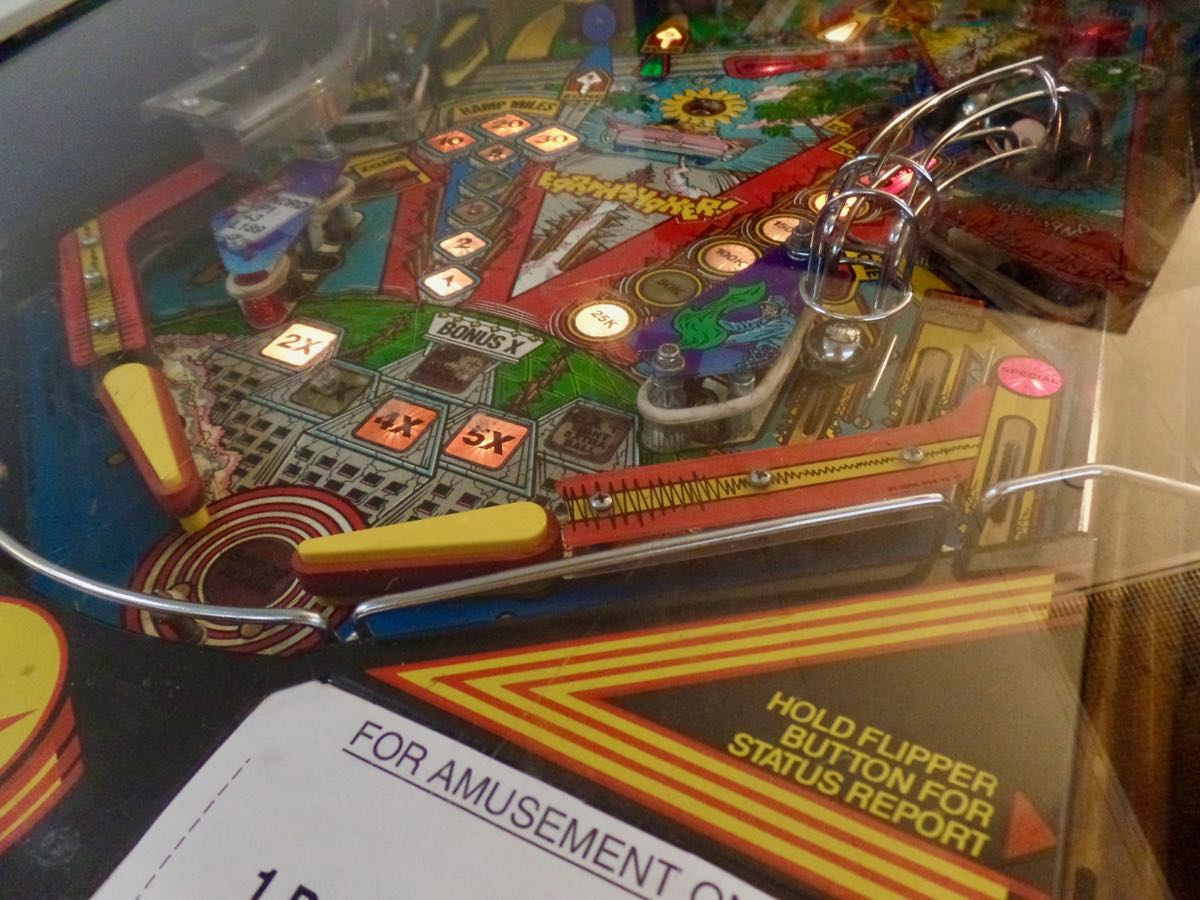 Ball stuck on Earthshaker, caught on the little triangular-shaped wire on the inlane here. This is a bear of a problem to fix because if you rock the game forward and back some the ball should roll free, as long as you don't tilt. Good luck! 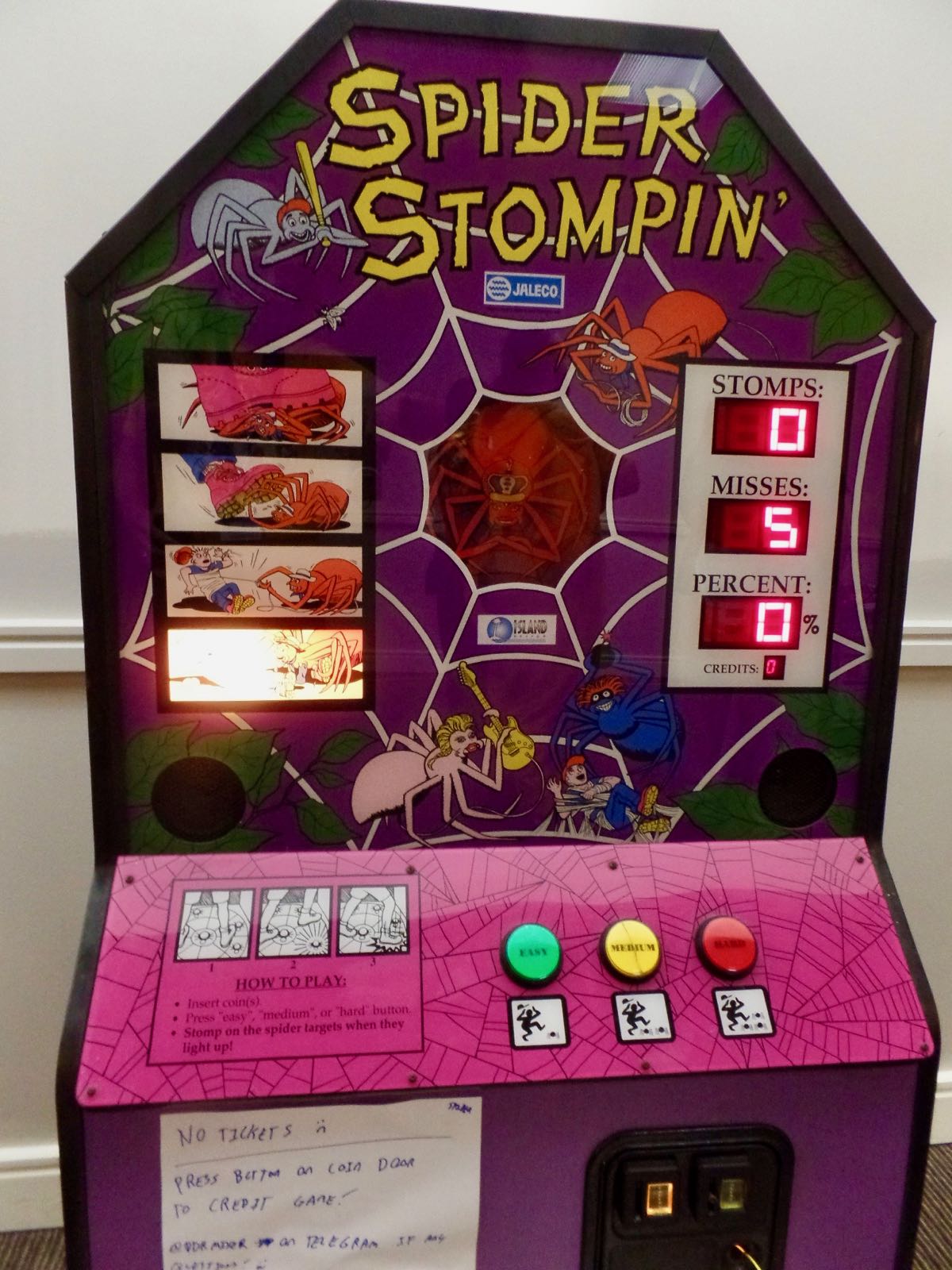 One of the other games, Spider Stompin', where you have to step on one of eight lighted spots on the platform. A like the spider characters here. 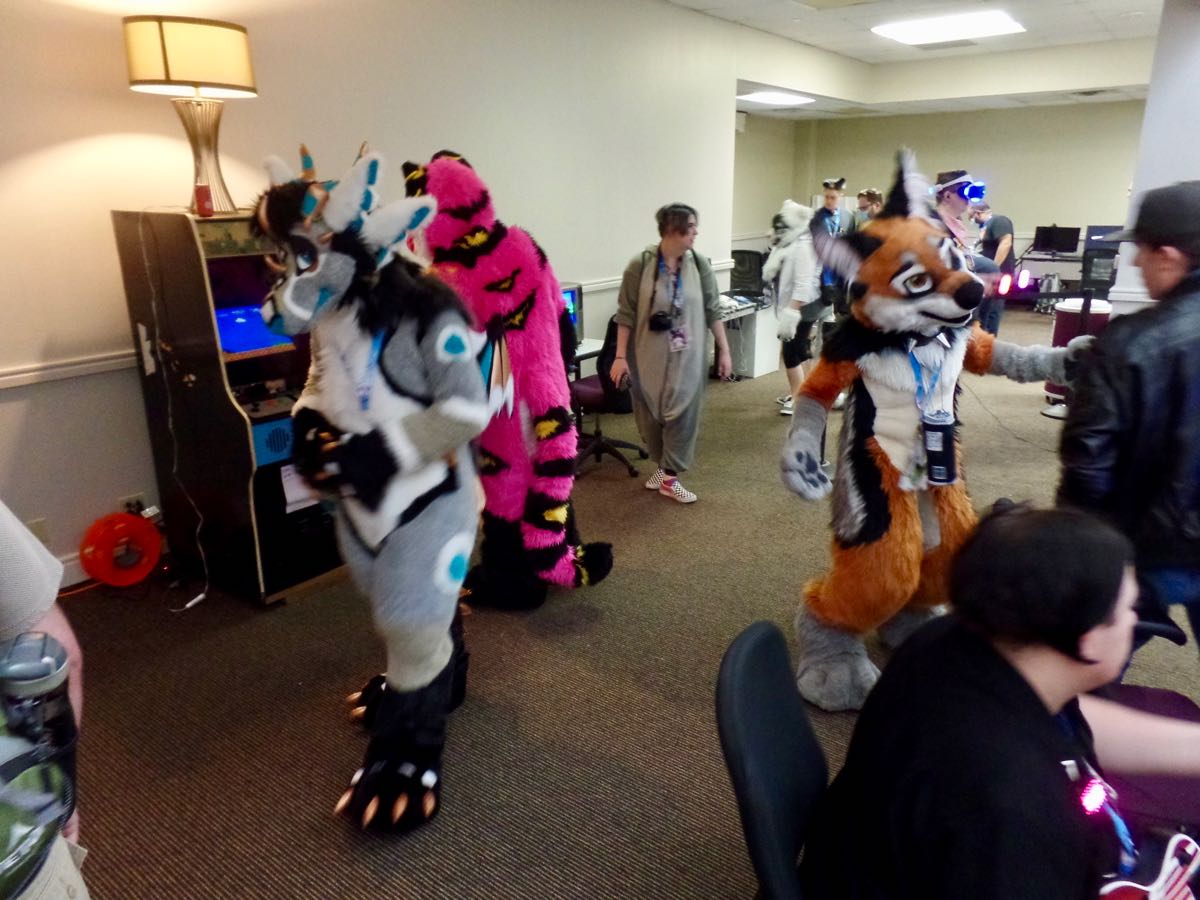 Folks in fursuit wandering around the arcade room. 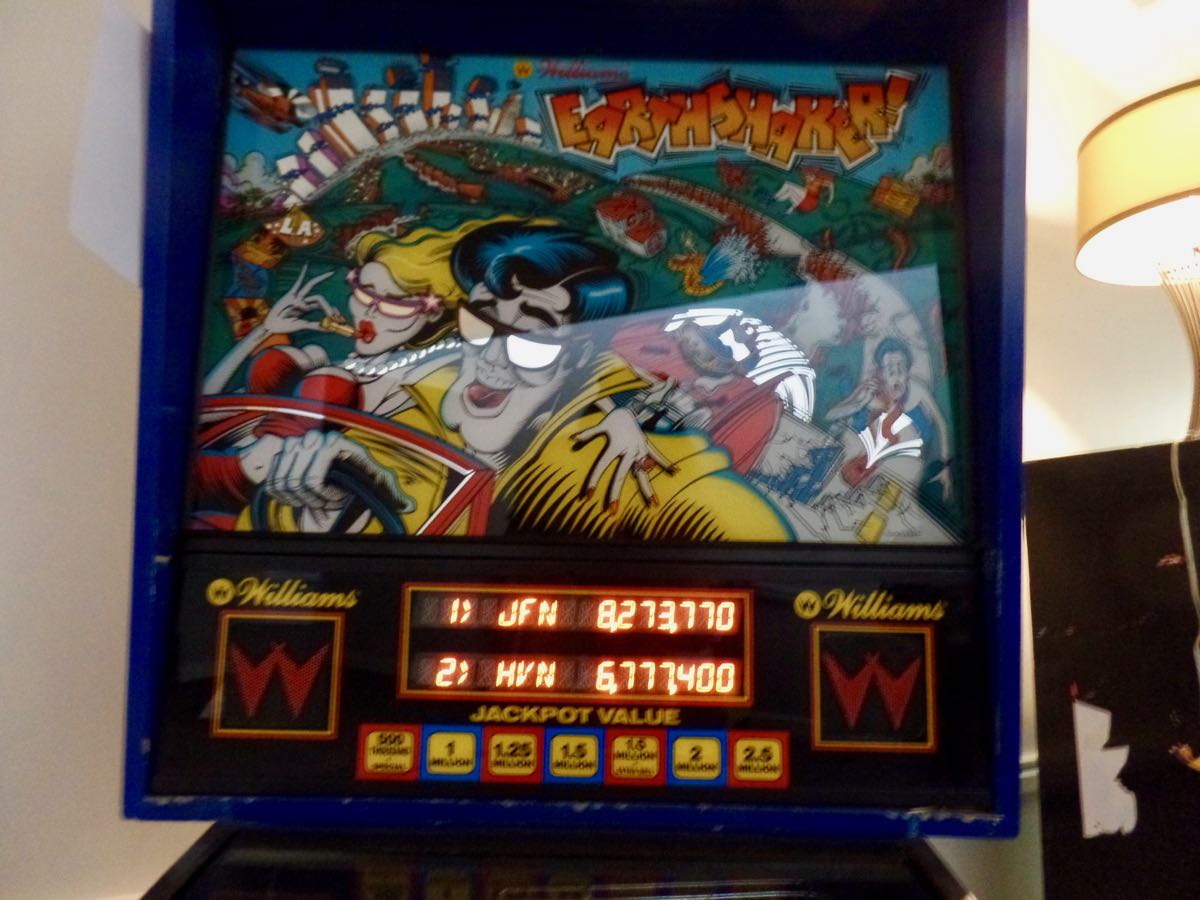 And oh, so, turns out I got on the high score table Saturday. I would have sworn it was Friday. In any case

bunny_hugger was ready to stab me in the kidneys for it.

Trivia: The United States Brewers Association estimated that in July 1933 Americans drank 1,332,790,408 glasses of beer. Source: The Poisoner's Handbook: Murder and the Birth of Forensic Medicine in Jazz Age New York, Deborah Blum. This was still before the passage of the 21st, Repeal, Amendment, but was after the Cullen-Harrison Act allowed the sale of 3.2-percent beer and wine. The 18th Amendment prohibited the manufacture or sale or importation of intoxicating alcohols and the act's reasoning was that these were not intoxicating.