It was a cool, overcast, rainy day at Cedar Point, and so we did not go. Since we need to be home tomorrow, for trick-or-treaters, in case any come, this means our amusement park season ended back on my birthday, with that day at Cedar Point ending in a great string of walk-on riding. It was a good end, and we thought it might be the end when we did it, but it's still a bit sad to have it over so soon.

So in consolation here's a bunch of pictures from Saturday at Motor City Furry Con this past month. 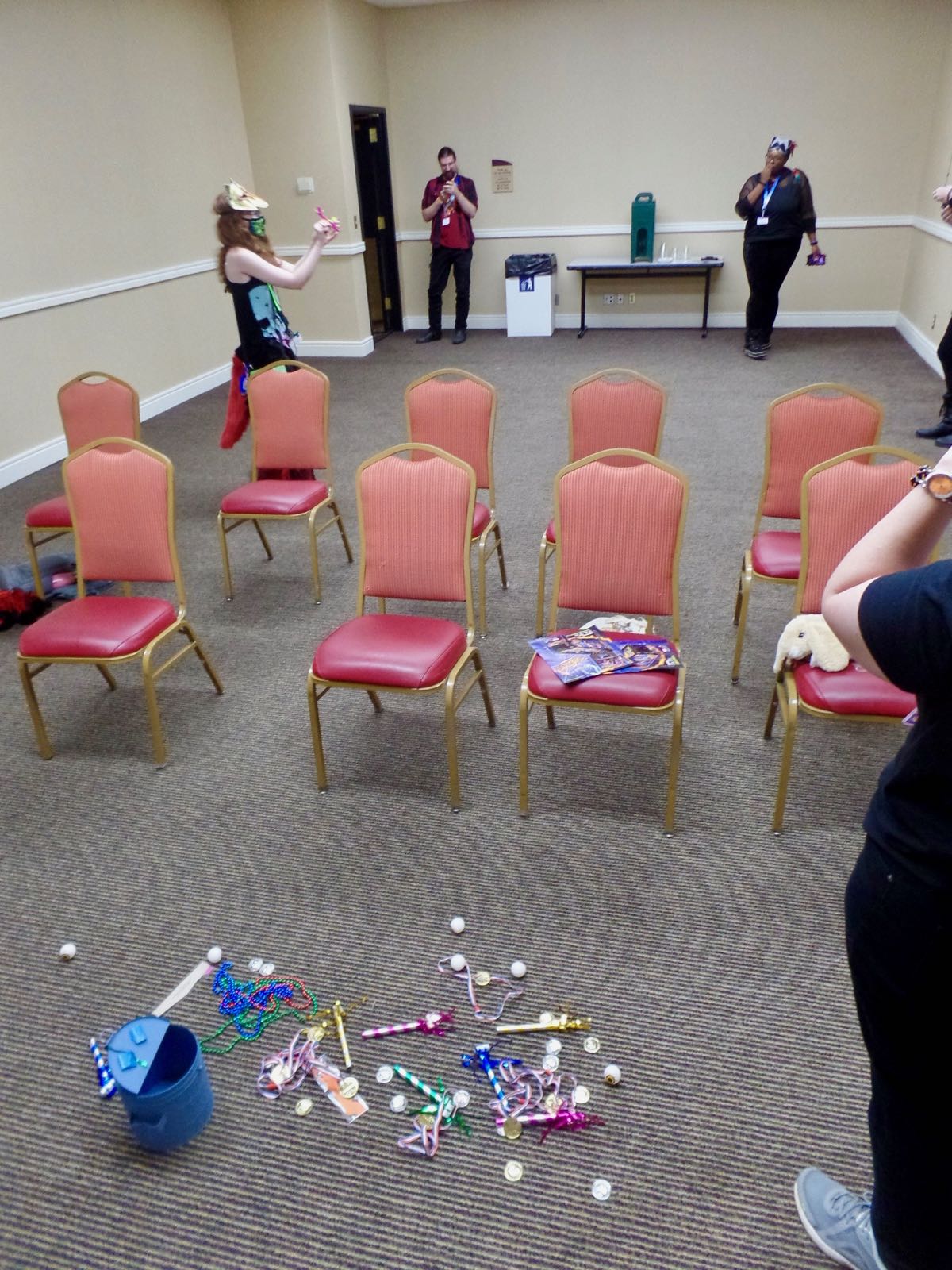 Aftermath of the Raccoons and Procyonids SIG, as people try to fly four-to-the-dollar cardboard gliders. Also note up front several dollars' worth of party favors spilled out of the trash bin that looks like it has a smiling face on top. 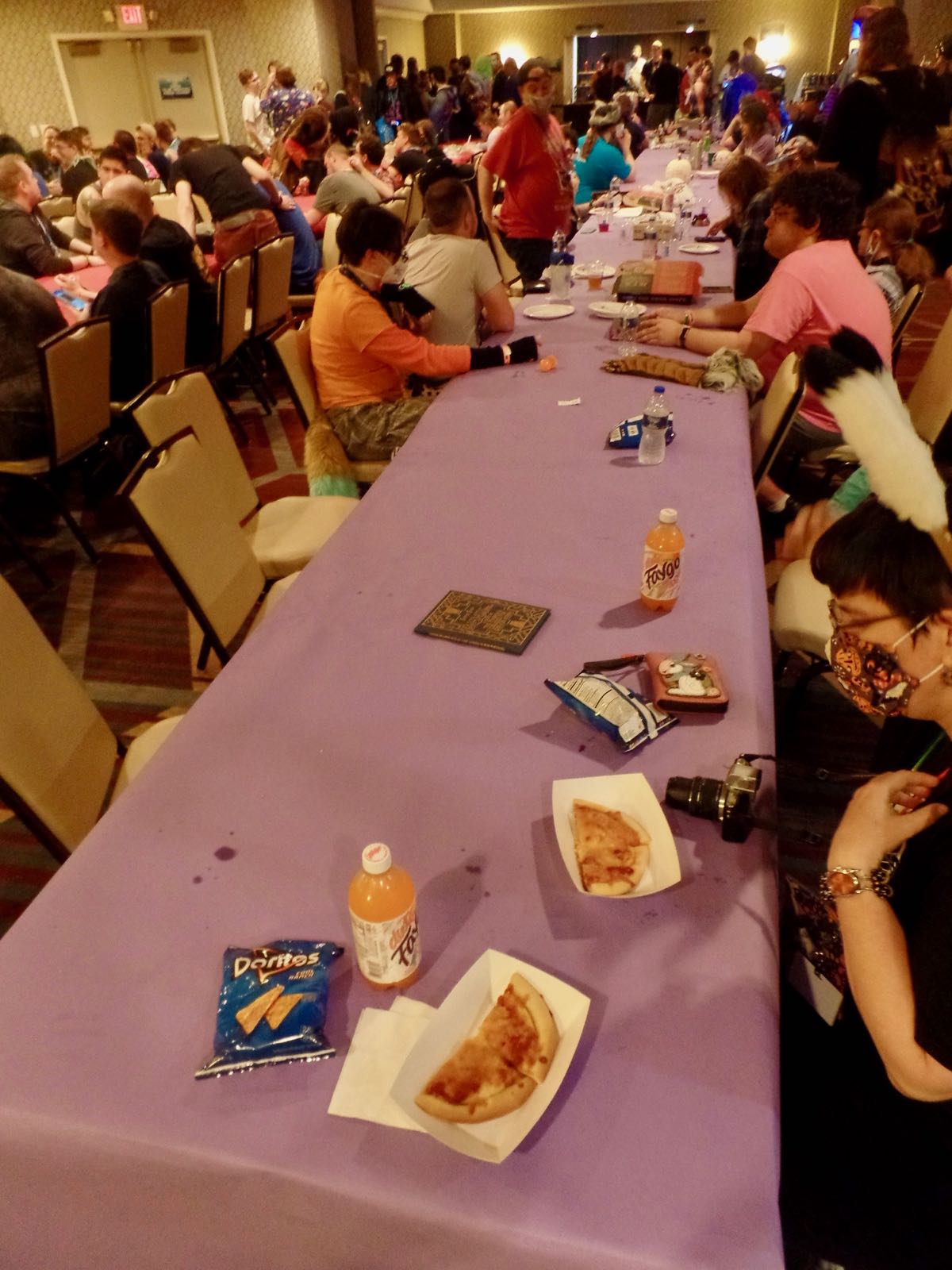 Dinner, in Con Suite, the closest we've been to dining in a restaurant since March of 2020. 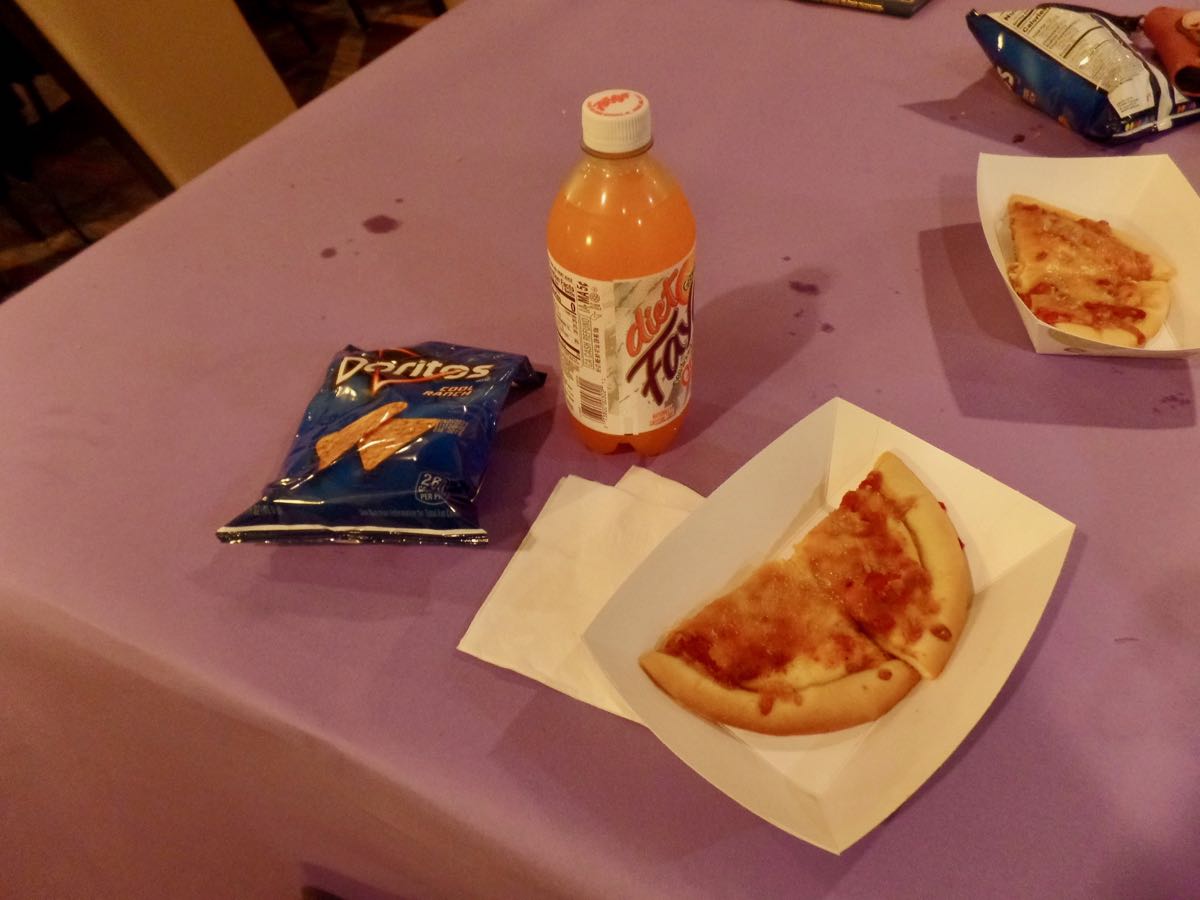 So that's what our meal vouchers were good for, two quarters of pizza and a bag of Doritos. The Faygo was free-flowing, but bottled. 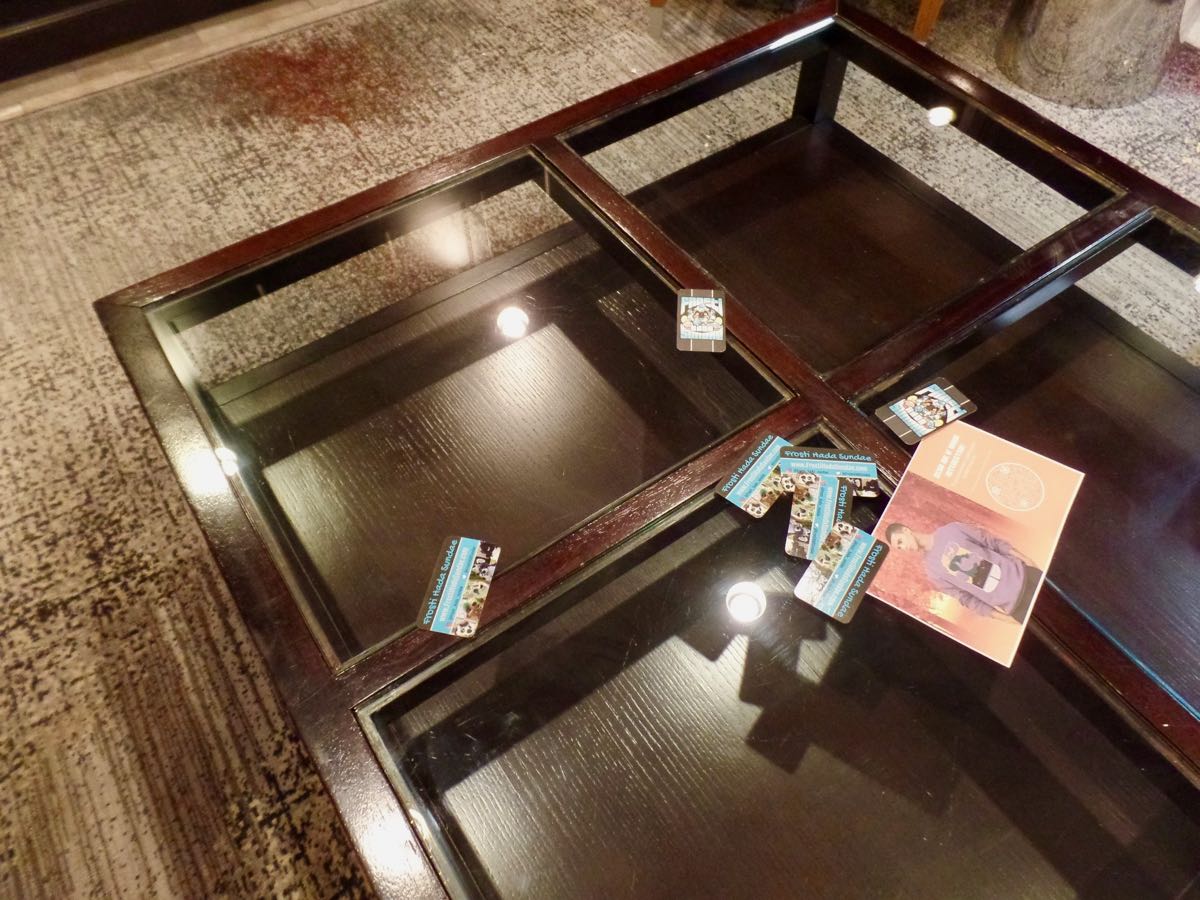 Furry business cards scattered out across the table just in case someone picks one up. 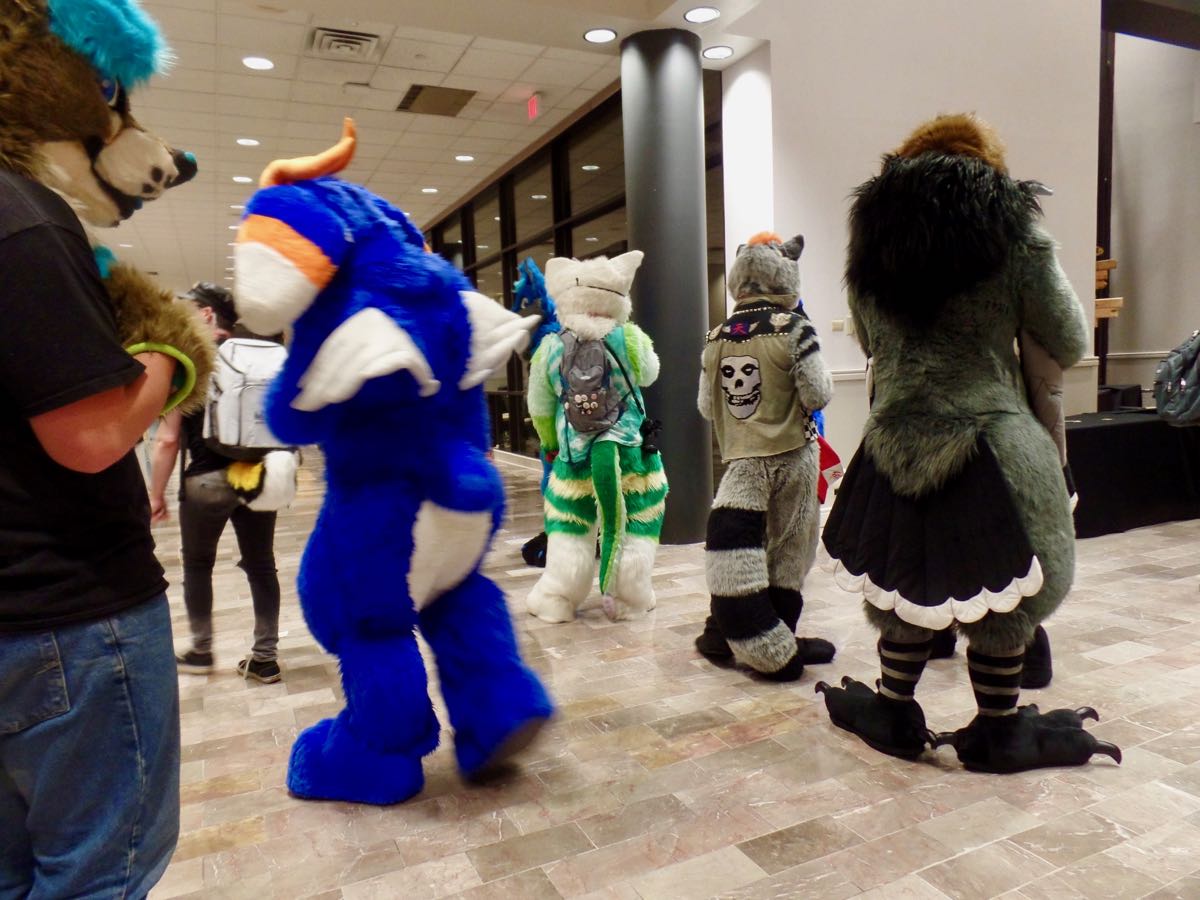 And here's a group of fursuiters gathered outside the Headless Lounge, all pretending not to notice one another. 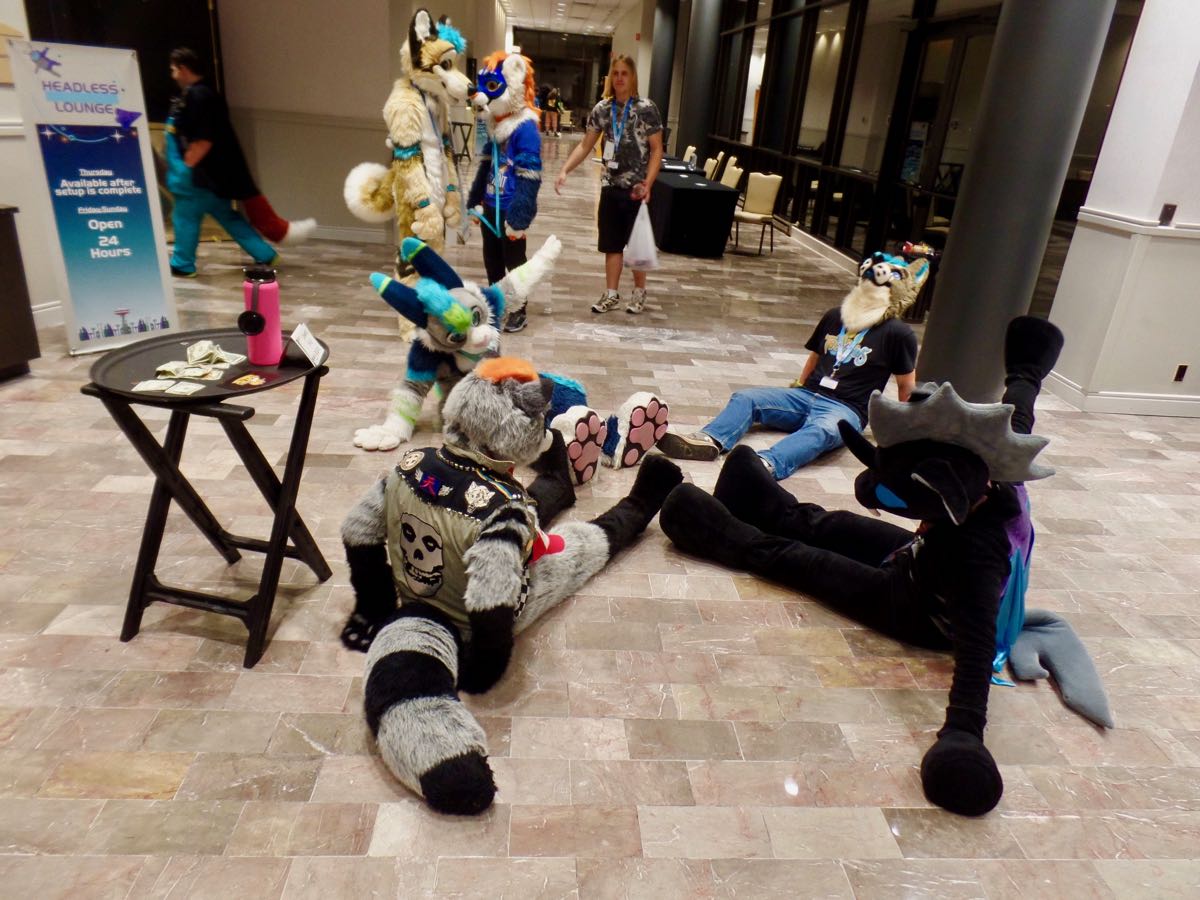 And here's a group of fursuiters gathered outside the Headless Lounge, all noticing one another. 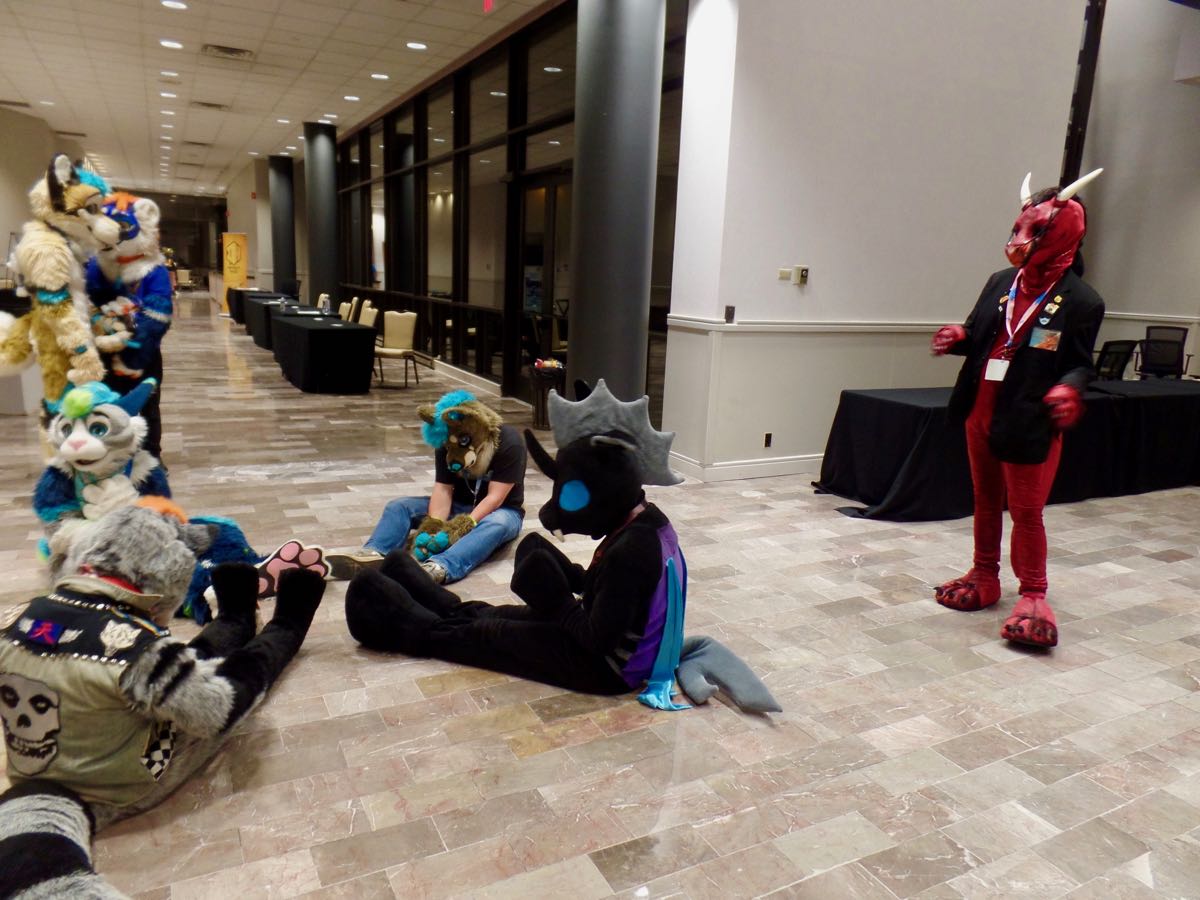 Dragon wonders if he can get in on this group but feels like it would be awkward to ask. 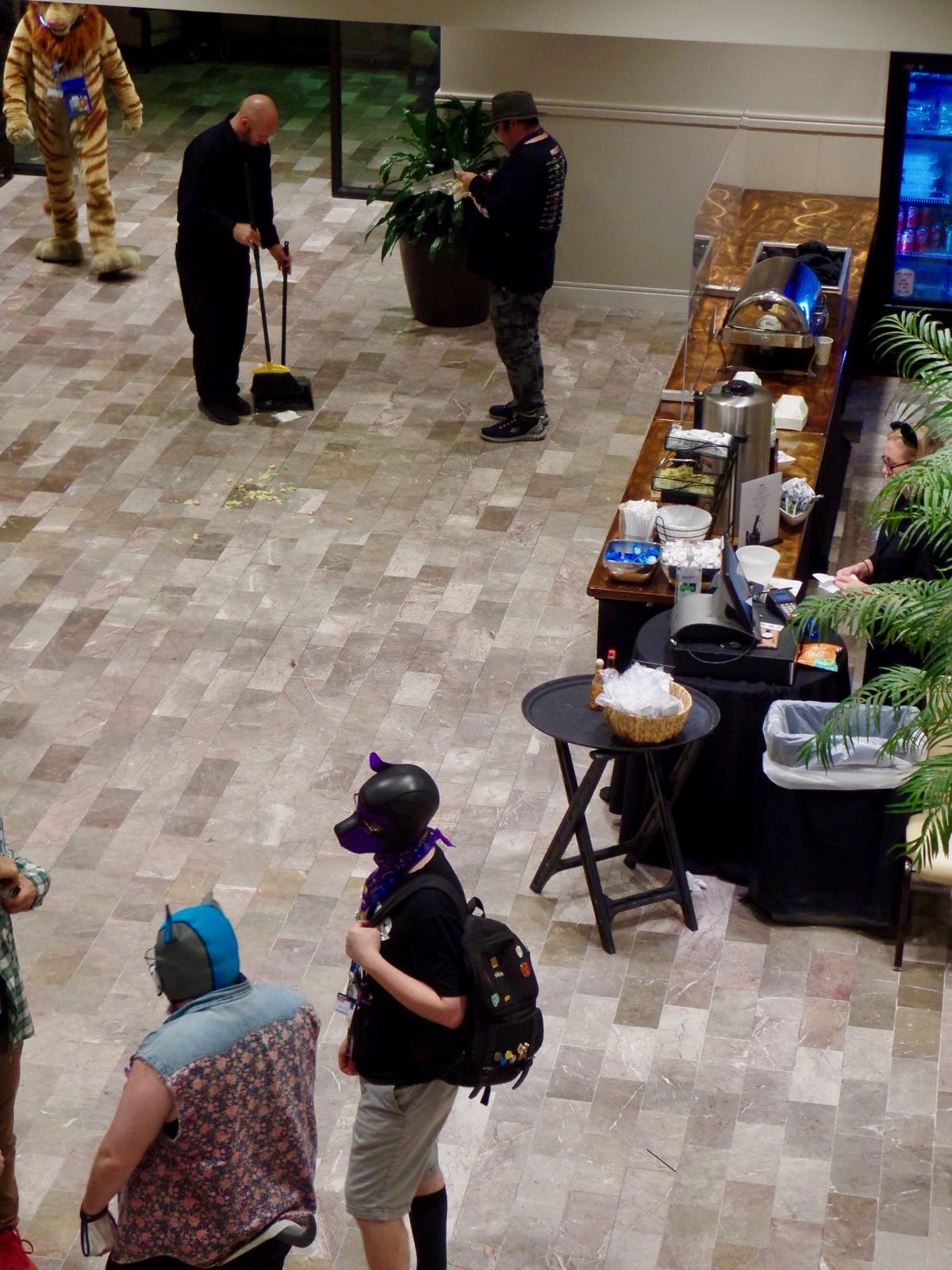 Poor guy up top spilled his salad from the to-go station, and here's hotel staff cleaning up the sad mix. 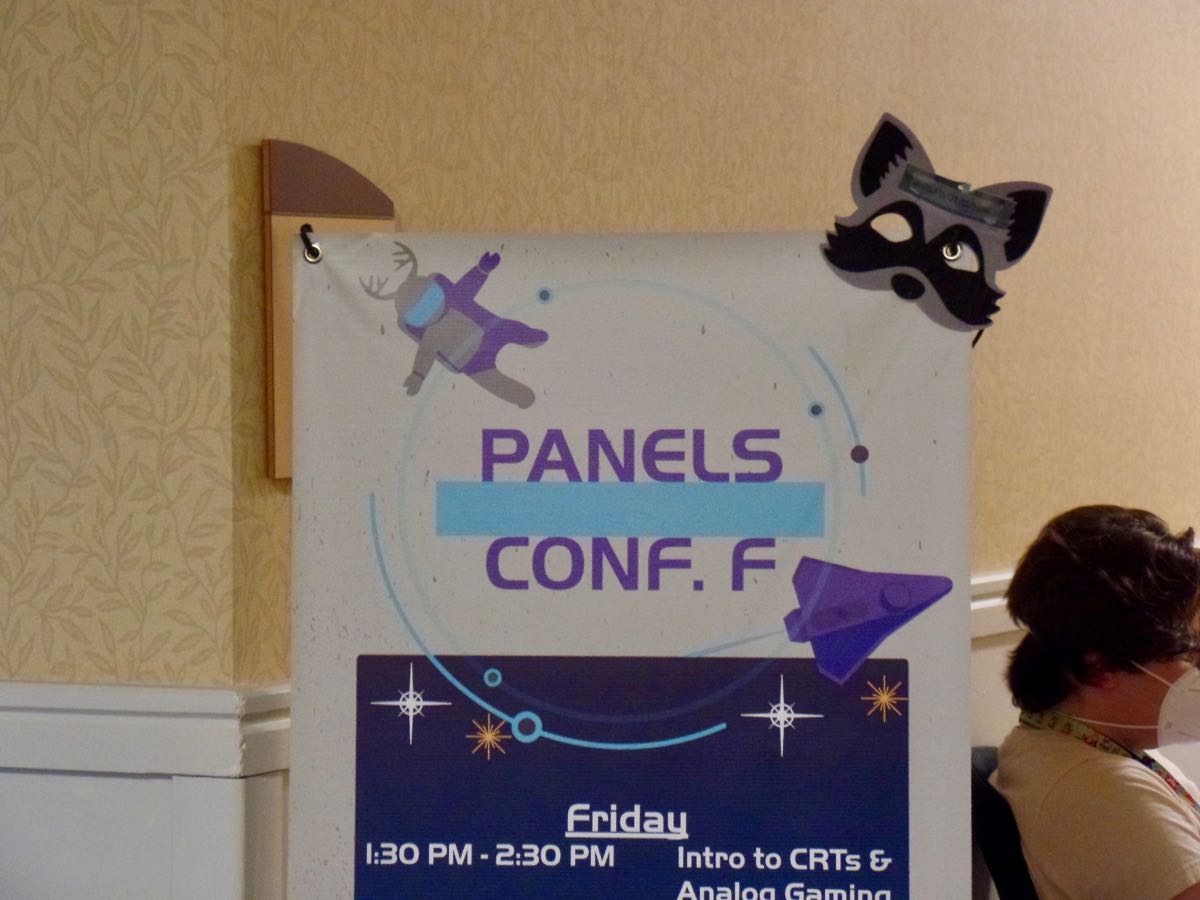 Oh, so I put a one-dollar raccoon mask on the panel sign so I might draw any attention to the Raccoons and Procyonids SIG, and then forgot about it. Someone either improved it, or made it way creepier, by balancing the mask so one of the button-holes of the standee was looking through the eye. 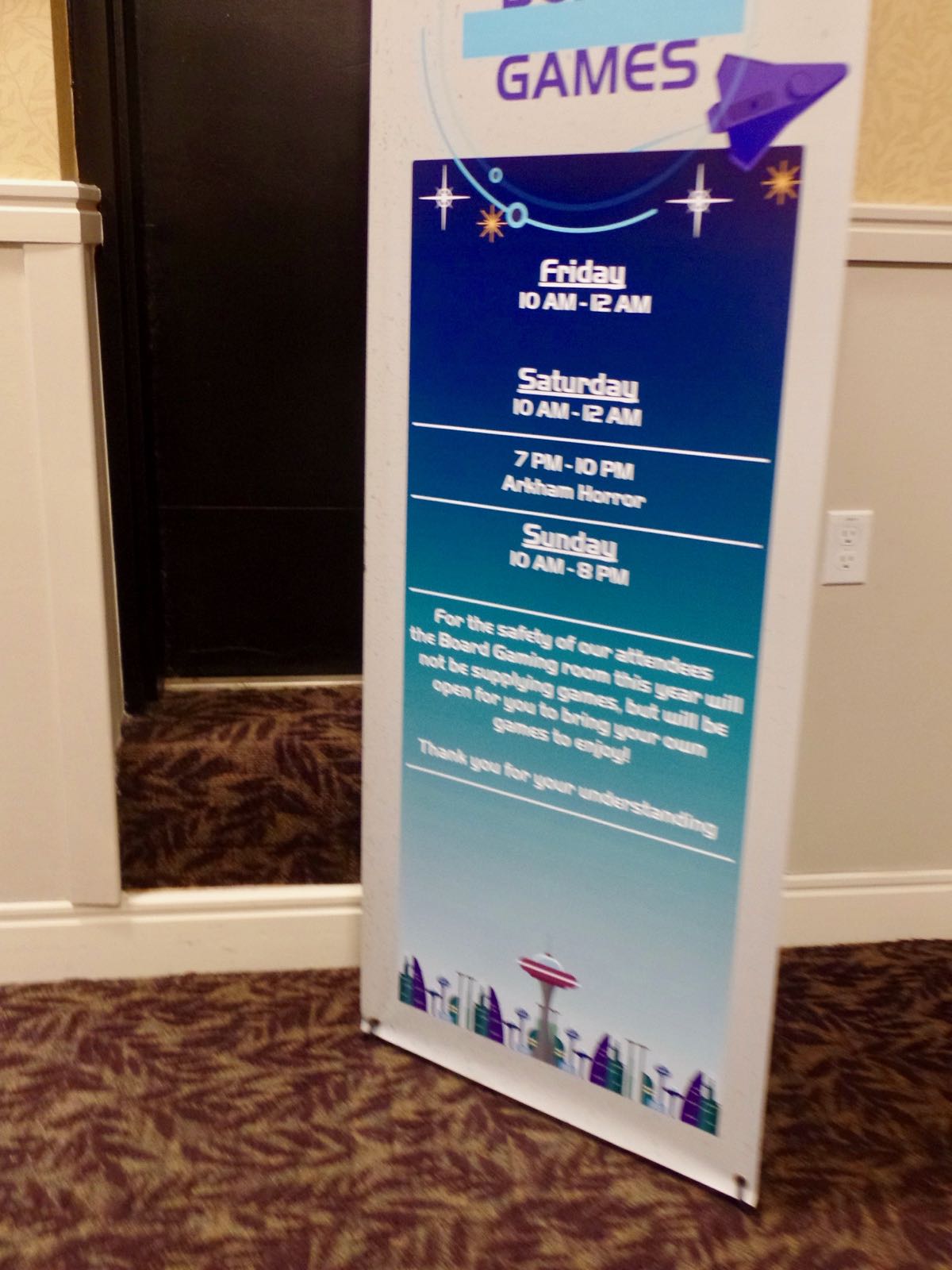 Standee outside the board games room explaining that the convention couldn't supply games (the usual board game folks couldn't cross the Ontario border) but they hoped people would. 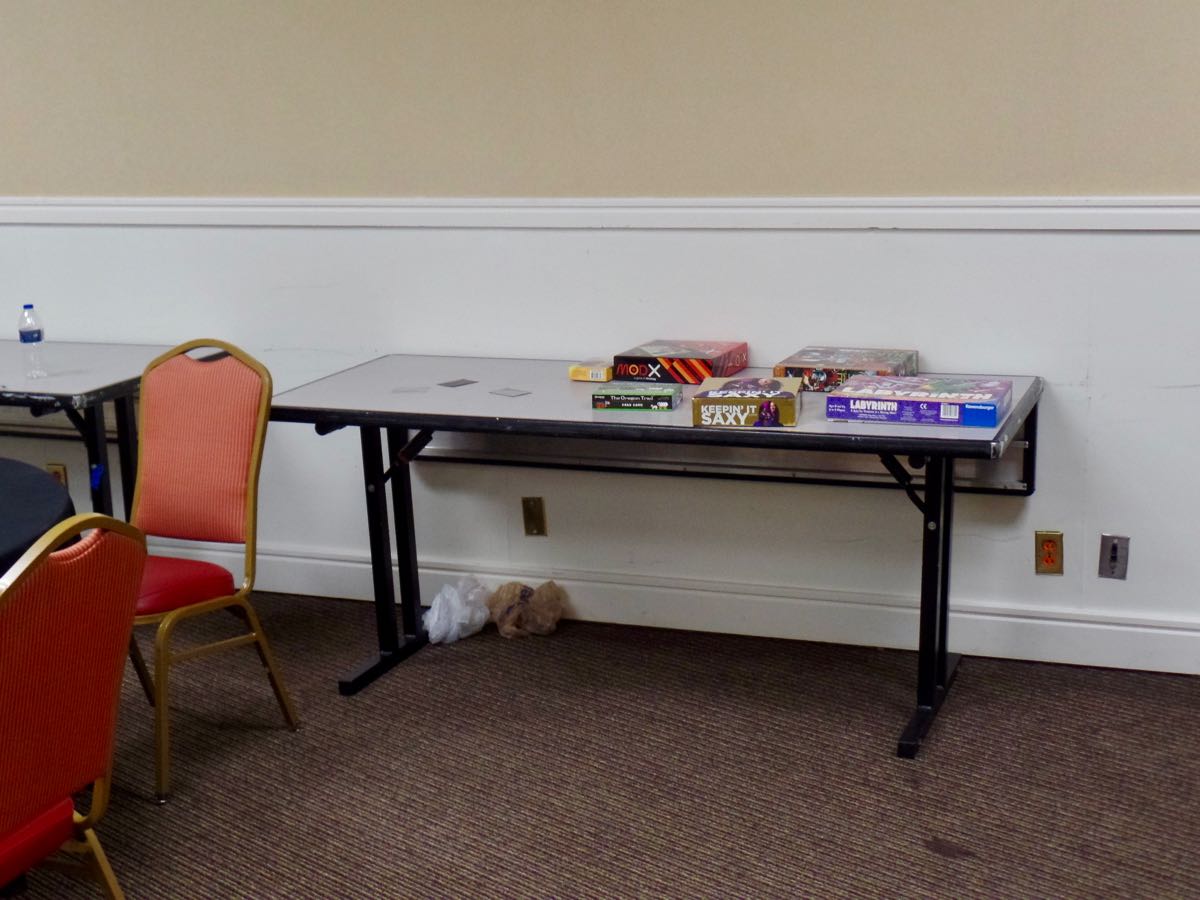 Some folks were good enough to bring games for the cause but it was a meager selection, must admit. 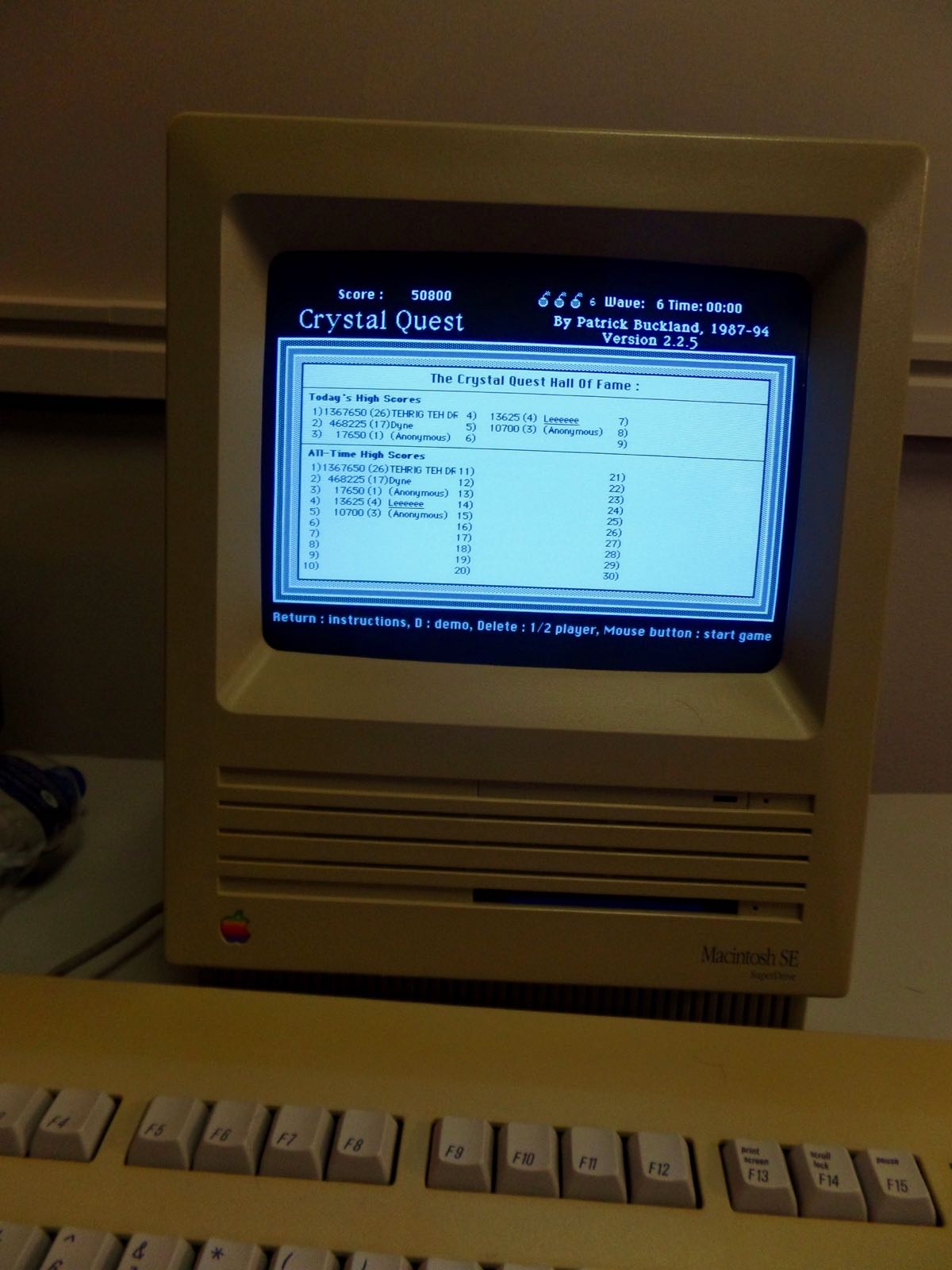 Ooh! Crystal Quest in the arcade room! That brings back memories of when I didn't know how to play it back in the 90s either.

Currently Reading: Screwball! The Cartoonists Who Made the Funnies Funny, Paul C Tumey. So a lot of these are really fascinating, but the cramped and shaky originals, shrunk from True Broadsheet Size down to what is still a pretty big book makes it hard to read and even going over it with a magnifying lens makes me aware that my eyes are getting worse and I'm going to have to start wearing glasses. I might put the book aside and read something that isn't nudging me with reminders of my body accreting failures for a while.