We all get too much

bunny_hugger scheduled the simplest possible tournament: a two-player three-strikes tournament. The computer would draw pairs and draw tables, and everyone plays until they lose three times. We got, in the end, twelve people come to play, a respectable turnout considering this was meant to be the least effort

bunny_hugger could put into the tournament.

For me, the first loss came in the third round. And the second loss in the fourth round. I'd had some good games in the first two rounds and then just everything fell apart. This included a terrible loss on The Beatles, my favorite game there, not three hours after I got on the high score table playing the game for practice. My few wins included a ridiculous game of Star Wars that I won by literally 95,000 points out of about 230 million. And a win on the 2013 Stern Star Trek, on a game that was lousy and that somehow RED --- a better player and one who's expert on Star Trek --- did even worse on. I would end the tournament in sixth place.

The happiest news, though: I did not have to play

bunny_hugger. She won her first match, and then lost the next two, feeling herself doomed the rest of the night. That she went to beat JAB on Getaway didn't restore her spirits, as JAB just had an awfully unlucky game. By the next round, there were only nine players left, and she was the lucky recipient of a bye. What got her spirits going was winning a game of Metallica against DMC --- a great player, and the person I'd quipped while setting up would be taking home the trophy plaque and Godzilla backglass. She gave him his second strike, too. And did this by rushing for the thing that got points, building up the Sparky and then the Graveyard multiballs, rather than going for the harder-to-setup-but-more-valuable shots. DMC's first strike was from MWS, who'd be knocked out the next round by

bunny_hugger, who had a fair game of Road Show against MWS's lousy.

And now things were getting exciting as the number of players dwindled. DJN, who gave me my third strike, had a bye that round, while DMC knocked out the guy I'd just barely beaten on Star Wars. And this --- the eighth round --- made the match dwindle to three players.

bunny_hugger, DMV, and DJN. DMC got the bye and

bunny_hugger had to play DJN on Ghostbusters. It's not a game that treats her kindly, except that this time it did, with her getting several modes going, and even completed, and most of the way to the Storage Facility Multiball. DJN never had a chance.

For the ninth round, again with three players --- well, we got the news I was hoping for. She got the bye, probably because she was the one who'd had a bye least recently. DJN and DMC played on Teenage Mutant Ninja Turtles. Turtles is a hard game and I haven't got any idea how to have even a reliable mediocre game. DMC had the much better game, although I'd still have taken DJN's. The game ended up taking about twenty minutes, the sort of game time you get on games you're good at. The important thing is this knocked out DJN, leaving

Both had two strikes, so the winner would be whoever won this one game of Godzilla. A game that

bunny_hugger had played four times, by her count, and that DMC had been playing roughly nonstop since it arrived in the venue three weeks ago. It's a fun game, mind you, a lot of funny bits, and every shot is fun. But it's also a modern Stern game with 400 billion rules, all interacting in weird and indescribable ways.

bunny_hugger's only hope was to race for multiball and hope she could milk it along a good while, and hope that DMC had a lousy game.

And then what do you know but DMC had a lousy first ball, draining just after the ball saver turned off.

bunny_hugger had her opening, and ran through it. She got multiball started and kept it going, with a multiball that seemed ready to never end. She also discovered that with that multiball comes Blue Oyster Cult's ``Godzilla'', which plays as long as more than one ball's on the table there. Great fun. More, though, she played well, building up the super jackpot to a titanic 50 million points. She finished ball one at over 130 million points, enough to win against anybody but DMC, whom we all observed, now was just riled up.

Still, MWS coming over looked at the scores at the end of ball one and his eyes popped out like a Tex Avery cartoon character. JAB saw it too, double-taked, and bumped fists with

bunny_hugger. Where DMC couldn't see, for courtesy, but still, it was a great start to poking this bear.

The bear responded with a multiball, good but not as good as

bunny_hugger's. And got a Kaiju Battle mode going, good for abundant points if it's finished, but he didn't finish. He ended his second ball a little behind

bunny_hugger still. For her second ball, she tried to repeat the process of her first, start multiball and milk multiball. She didn't quite, but did put another 25 million points or so on her score, a lot of that from the bonus she'd built thanks to her first-ball performance. There was no reason DMC couldn't take an insurmountable lead on ball three.

But he did not.

Though he was playing okay, the ball took a bad bounce and went racing down the center. So hard, in fact, that the game didn't register that the ball had drained. DMC, disgusted with this, had walked away and then came back at the weird state of his game not ending. It was possible the game would malfunction and need to match to be replayed or something. Or, when the ball search started, it was possible the game might kick a ball back into play, if the programming figured whatever just happened couldn't have been a legitimate drain. The person who'd have to make a ruling in that case? ... well, this is awkward since it would be the tournament director,

bunny_hugger. Or since she was involved, her assistant, me. (There is great drama to be had until pinball gets some dividing lines between tournament players and referees. Also between players and the people who manufacture games. That's for a later day.)

But the ball search ran through, and figured the ball had drained, and counted up DMC's bonus. His game finished at less than the 150-something million

bunny_hugger already had. She had won, and without even having to play her last ball.

It's, and I still can't believe this, her first first-place finish besides the Smackdown tournaments (which are one game to qualify and one game to win). But, after all, she played well, for a good long time. And while she got some lucky breaks --- JAB's flame-out on Getaway, DMC's poor Godzilla showing --- so did everyone else. She played well, especially right when it counted most, and earned a heck of a triumph.

Now with the tree lit, we can observe it a bit, and see the drone show offered in place of the fireworks show ... eventually. 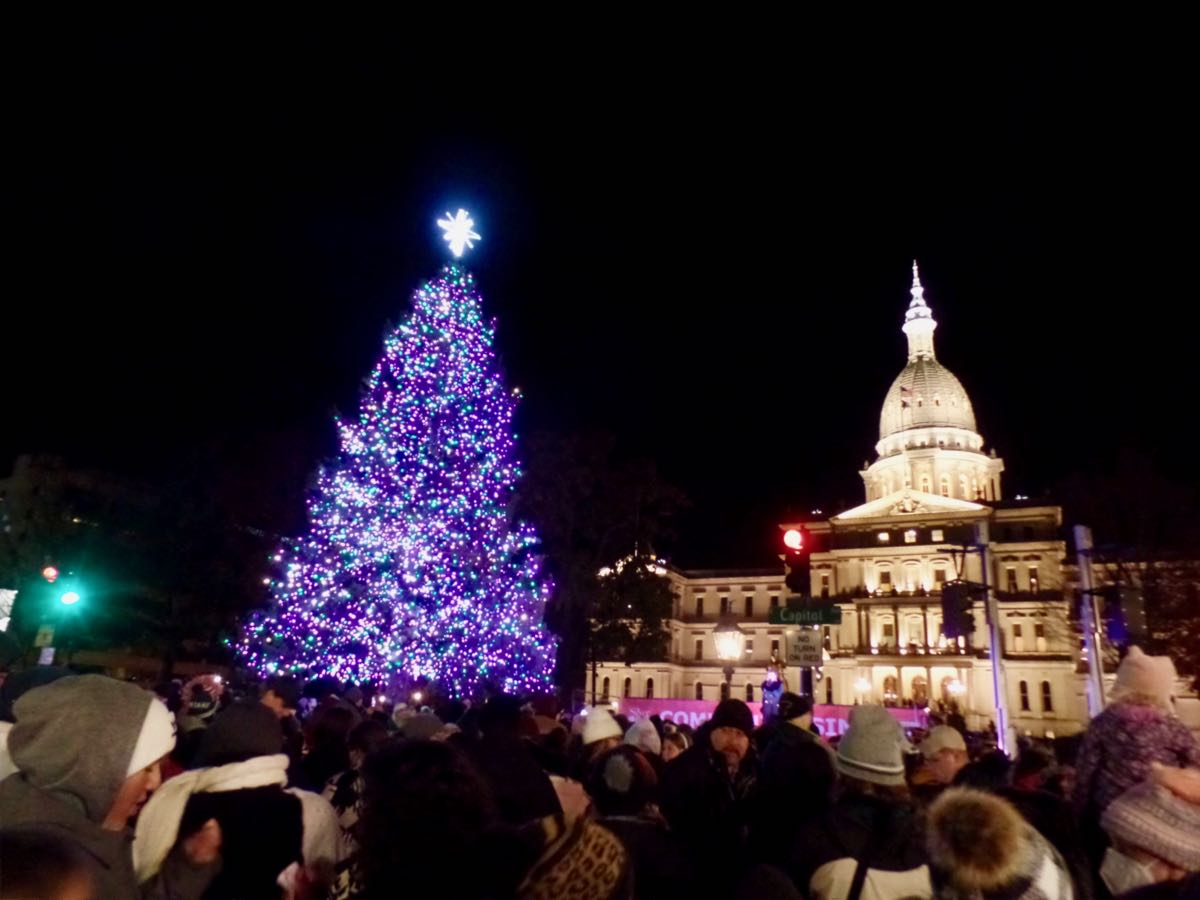 The tree changed color pretty quickly on its first lighting. It would tame down its transitions after a few minutes, when the event was over. 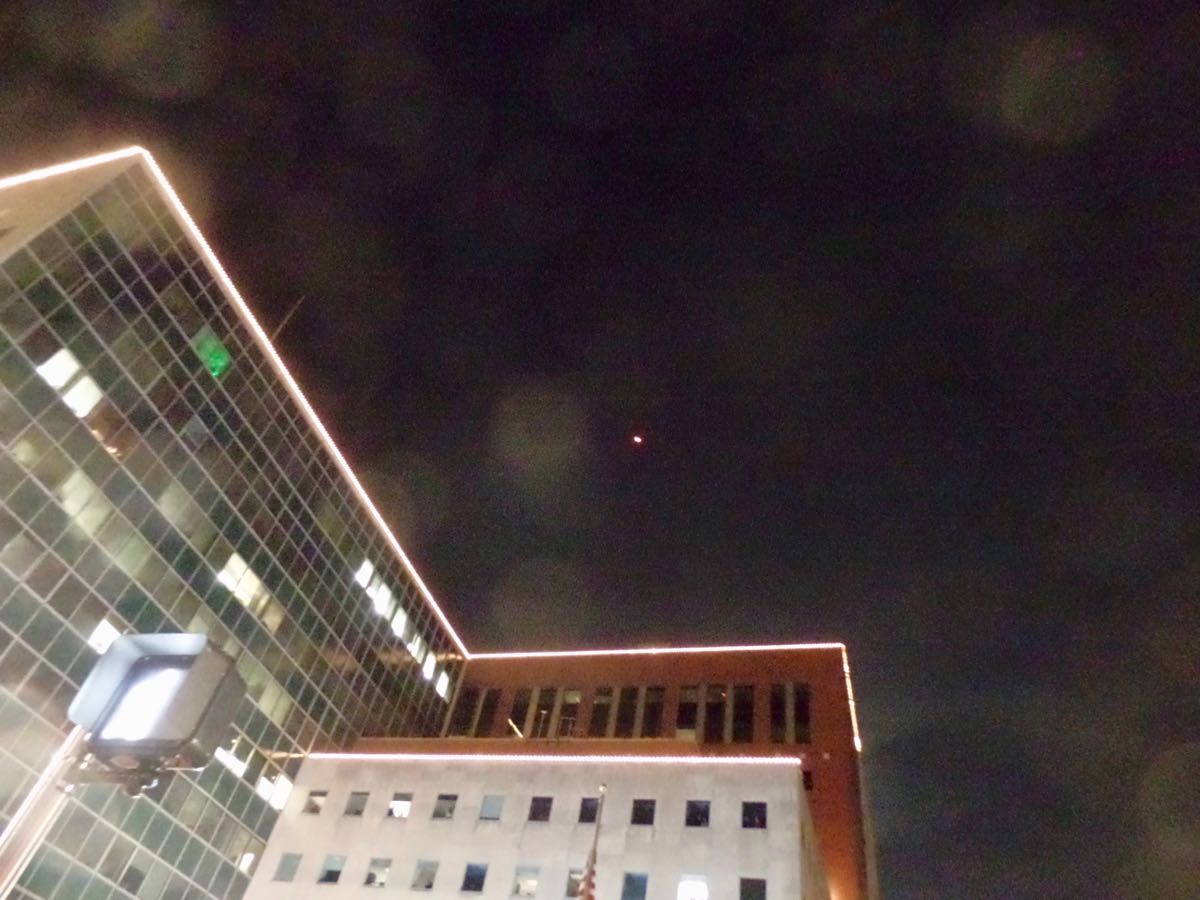 And finally a drone appears, after about ten minutes waiting! This wasn't part of the show and now I wonder if it's the drone that took pictures of the show for the City Pulse. 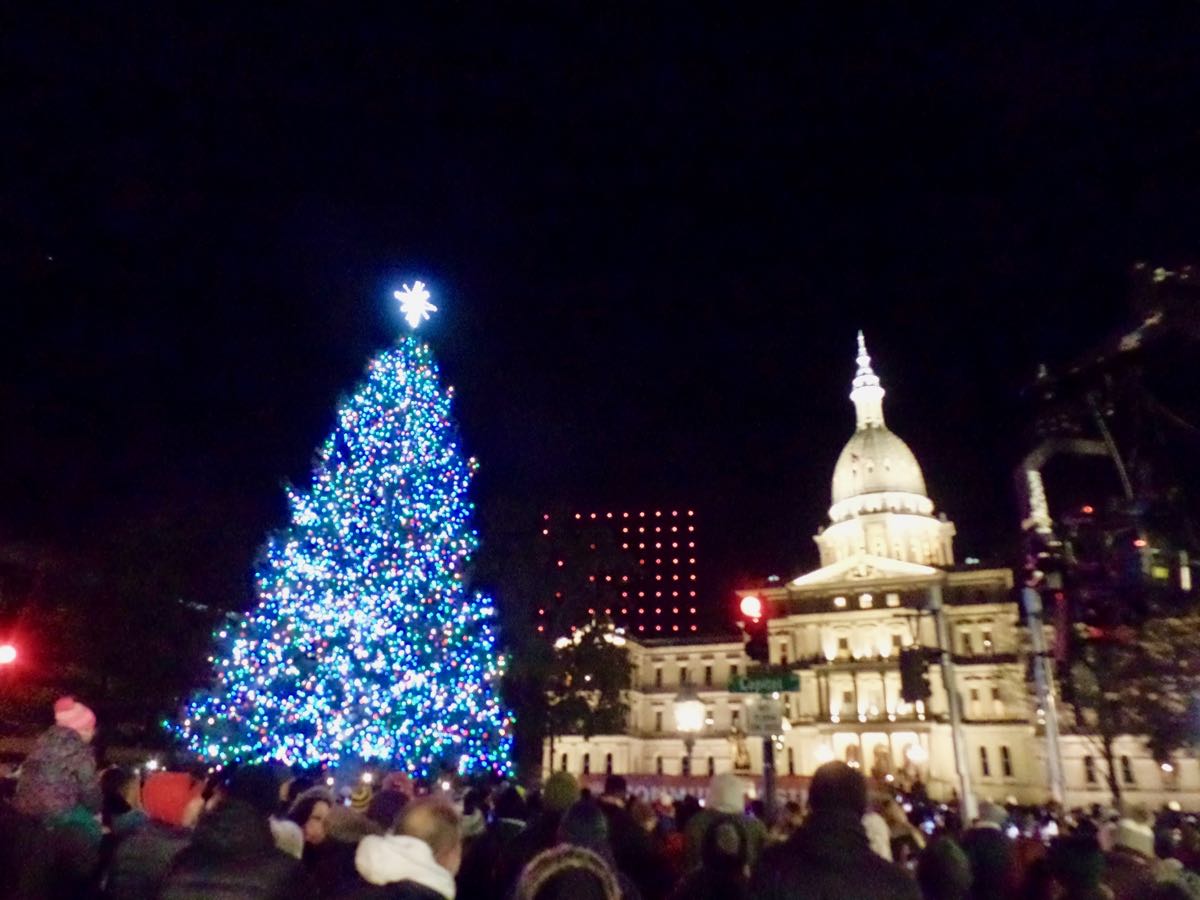 Here's the drone show finally starting, with the state tree, a regular civilian tree on the capitol grounds, and the capitol obstructing the view of the festive holiday image of the Gaussian Integers Mod 10.

Trivia: The peak NASDAQ Composite Index value in March 2000, at the top of the first dot-com bubble, was 5,132.52. Source: How Markets Fail: The Logic of Economic Calamities, John Cassidy. (It's presently around 15,500.)