It's Thursday and/or Friday, depending on your point of view. So here's what my humor blog has been all about the past week:

And you can put it, under its new name, on your Friends page or else into your RSS feed. If you like.

And now on to pictures from Lake Compounce. 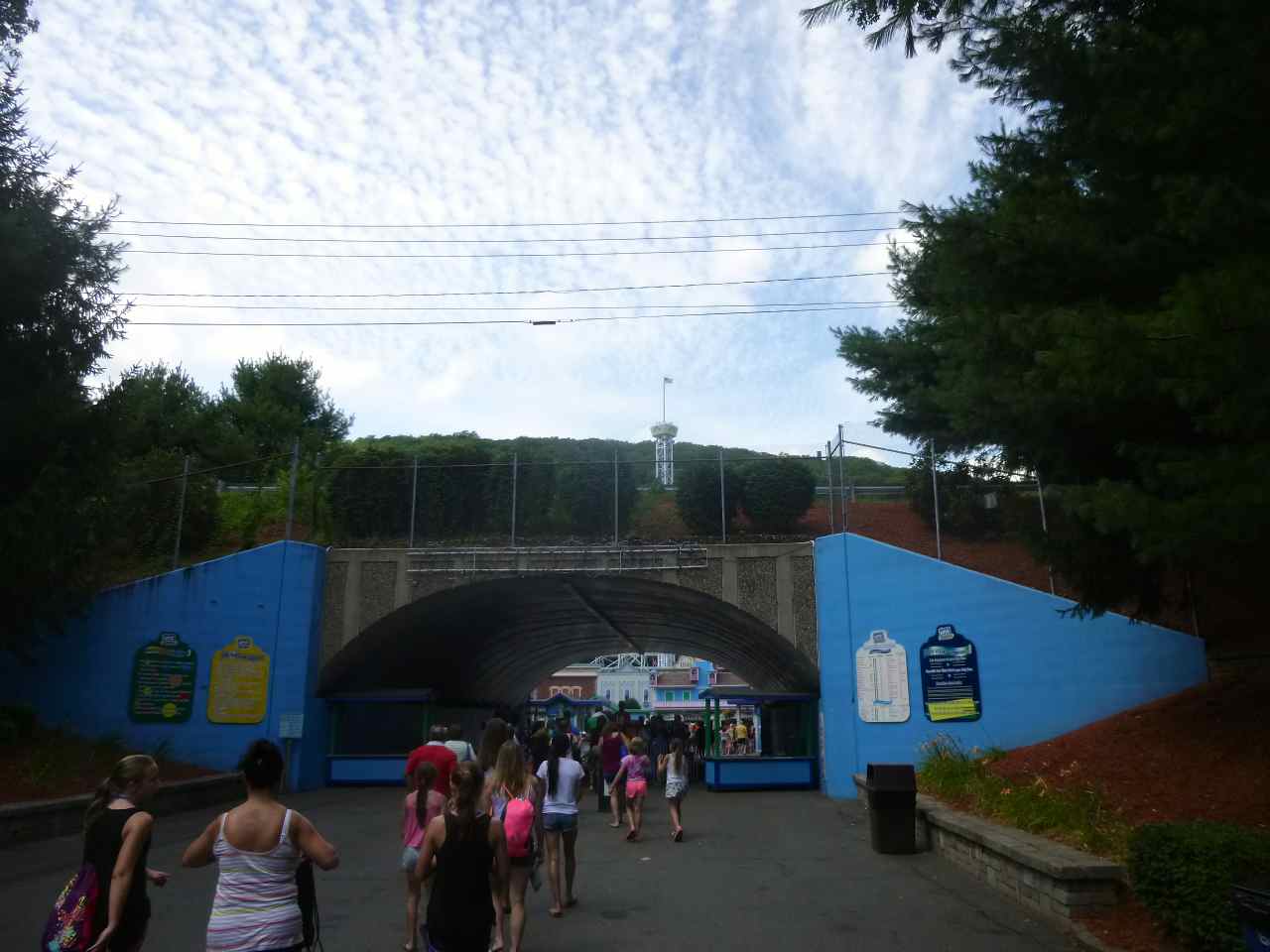 Lake Compounce's entrance, and another amusement park you enter beneath a highway underpass. Its sister park Kennywood has the same arrangement. So do Holiday World (if you use the bigger lot) and Parc Festyland. The drop tower is just visible in the background. 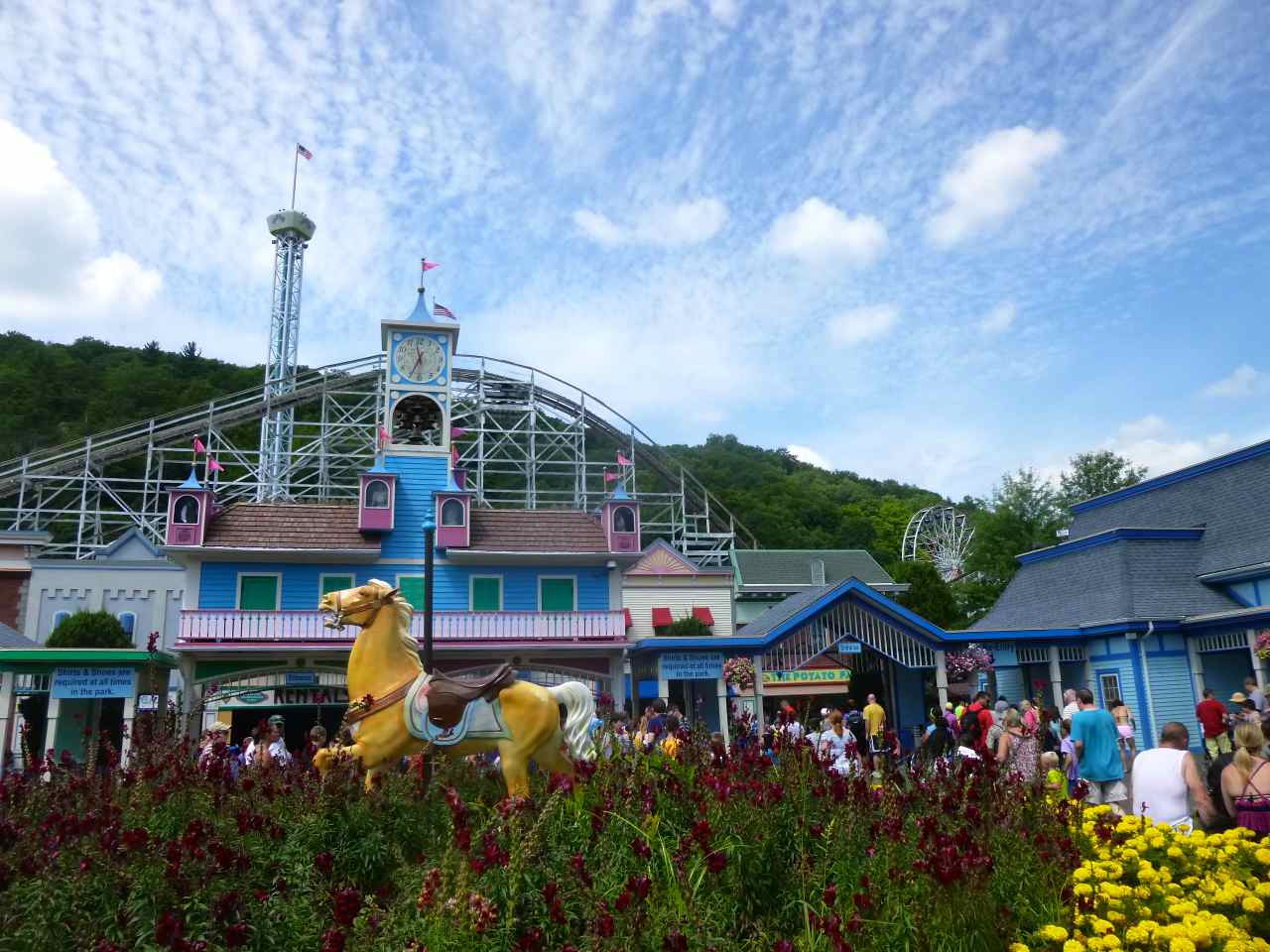 Lake Compounce's main entrance, with a carousel figure --- much like Kennywood --- up front. The Wildcat roller coaster is the one arching its way behind back there. There's The Potato Patch, right-center, where we'd get lunch; it reminded us of Potato Patches at Quassy and at Kennywood. 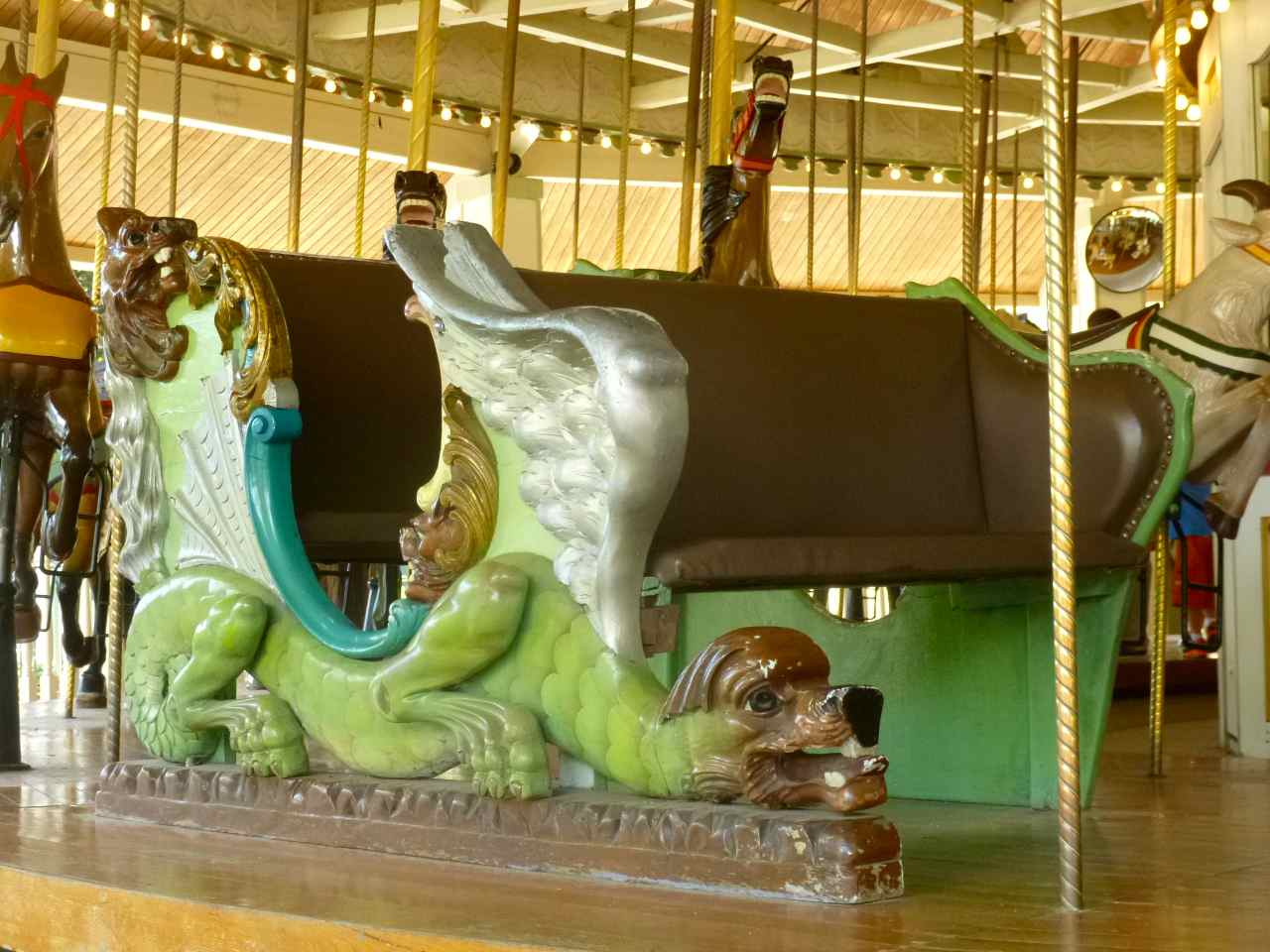 Sad-looking hang-dog dragon chariot on the carousel. I love chariot dragons that look downbeat or distressed or generally worried about everything that's going on. The carousel, signed as ``Our Beautiful Carousel'', has only been at Lake Compounce since 1911. It'd been at Savin Rock in Weest Haven, Connecticut, where it was assembled by showman Timothy Murphy. It's got horses from Charles Looff, Charles Carmel, and Stein & Goldstein, some of the big Charles-based names in carousel carving. (OK, Solomon Stein and Harry Goldstein.) 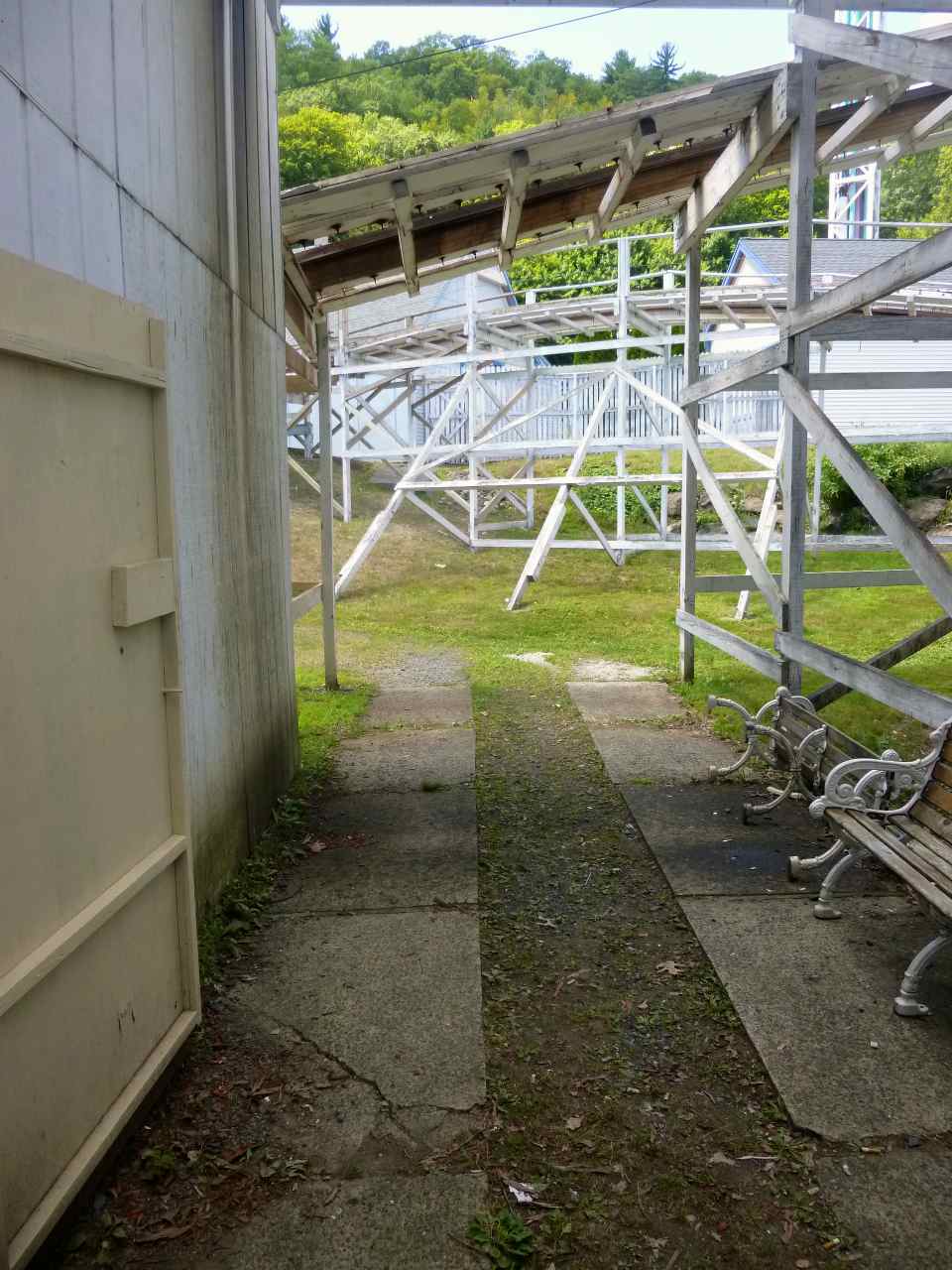 Mysteries of the park: this sure looks like a pair of cement tracks for some wide-wheeled vehicle. It peters out underneath a remote part of the Wildcat roller coaster tracks, though, and doesn't seem to be usable right now (see the park benches on the right). The fence does swing open at the spot, though, suggesting something might be done with them. 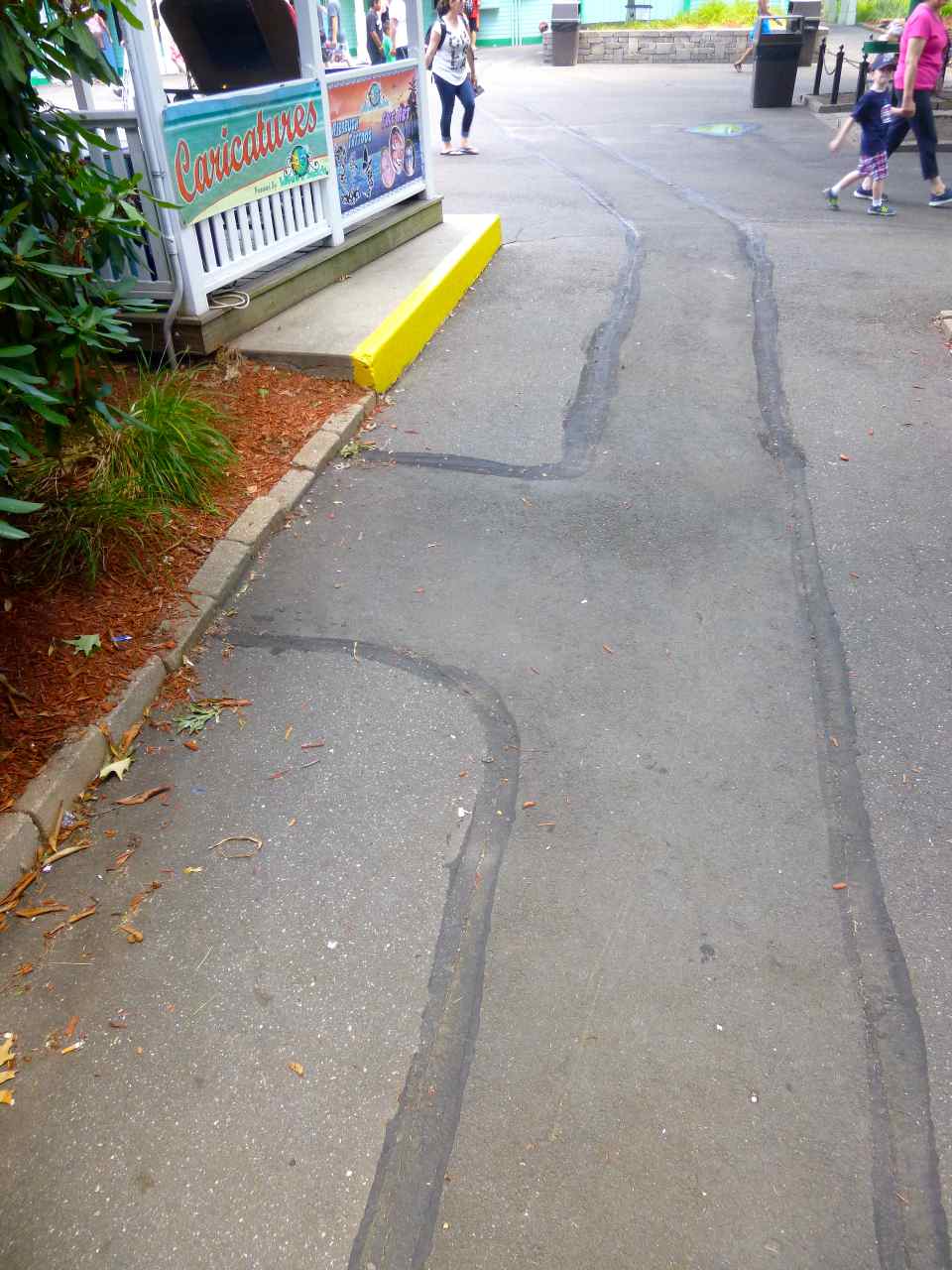 Park thing clearly used to be other thing: a trolley path? But then why the T intersection? A parade route? But again, why turn off into whatever was covered up by the curb? It runs quite a distance along the park, although we didn't follow its whole trail for clues.