My mathematics blog, as seen on Friends pages or possibly on the RSS feed, had the usual number of articles the past week. Although one day had a paltry six page views altogether, way below the average. I have no explanation for this. But, anyway, run there the past week have been:

Back to AnthrOhio Friday, then, only this time in photographs: 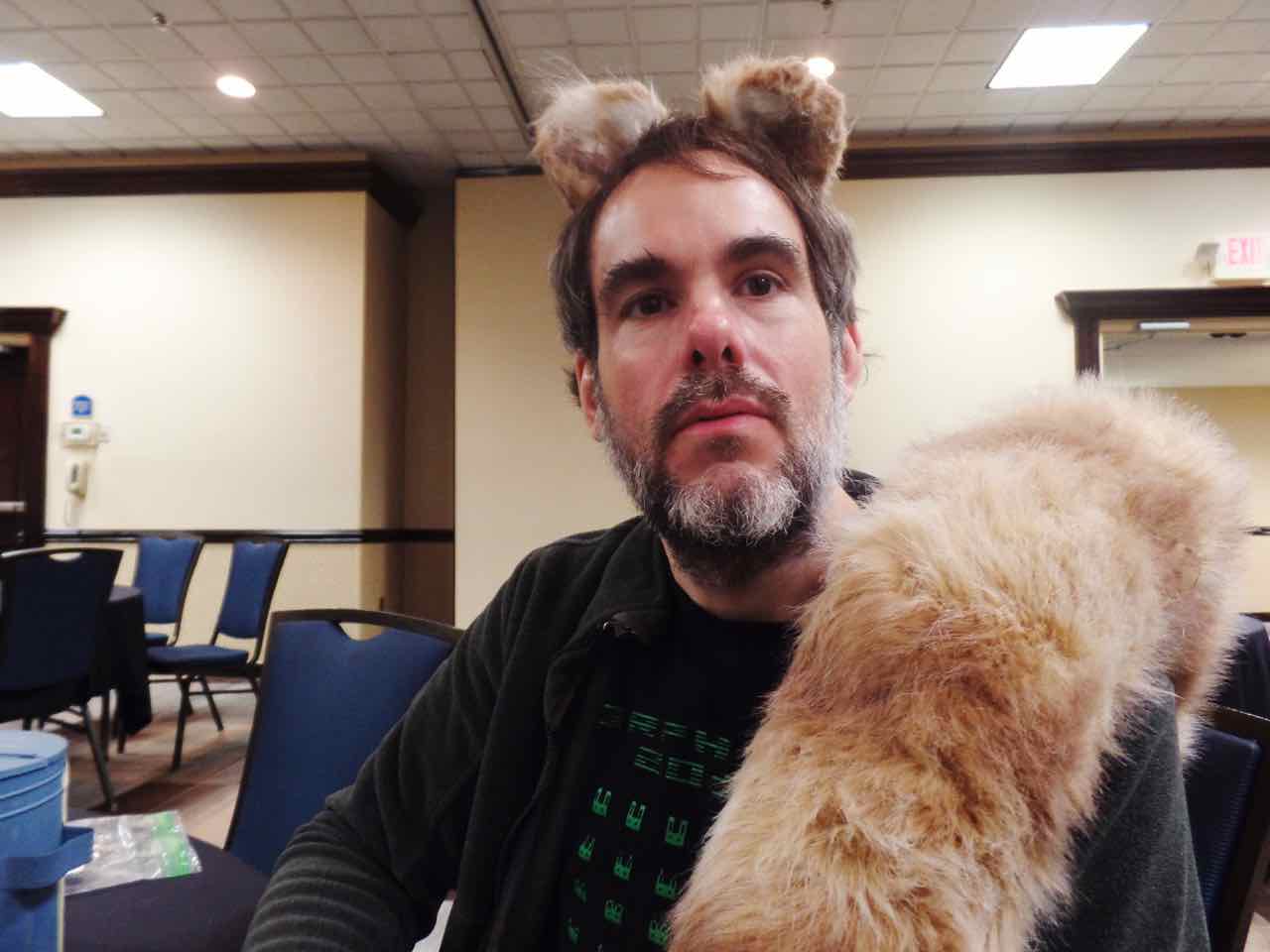 bunny_hugger takes camera in hand to give this picture of someone worried that the low price quoted to get the steps fixed means that the work is going to be shoddily done and it'll have to be re-done by some other, more competent outfit at much greater expense. 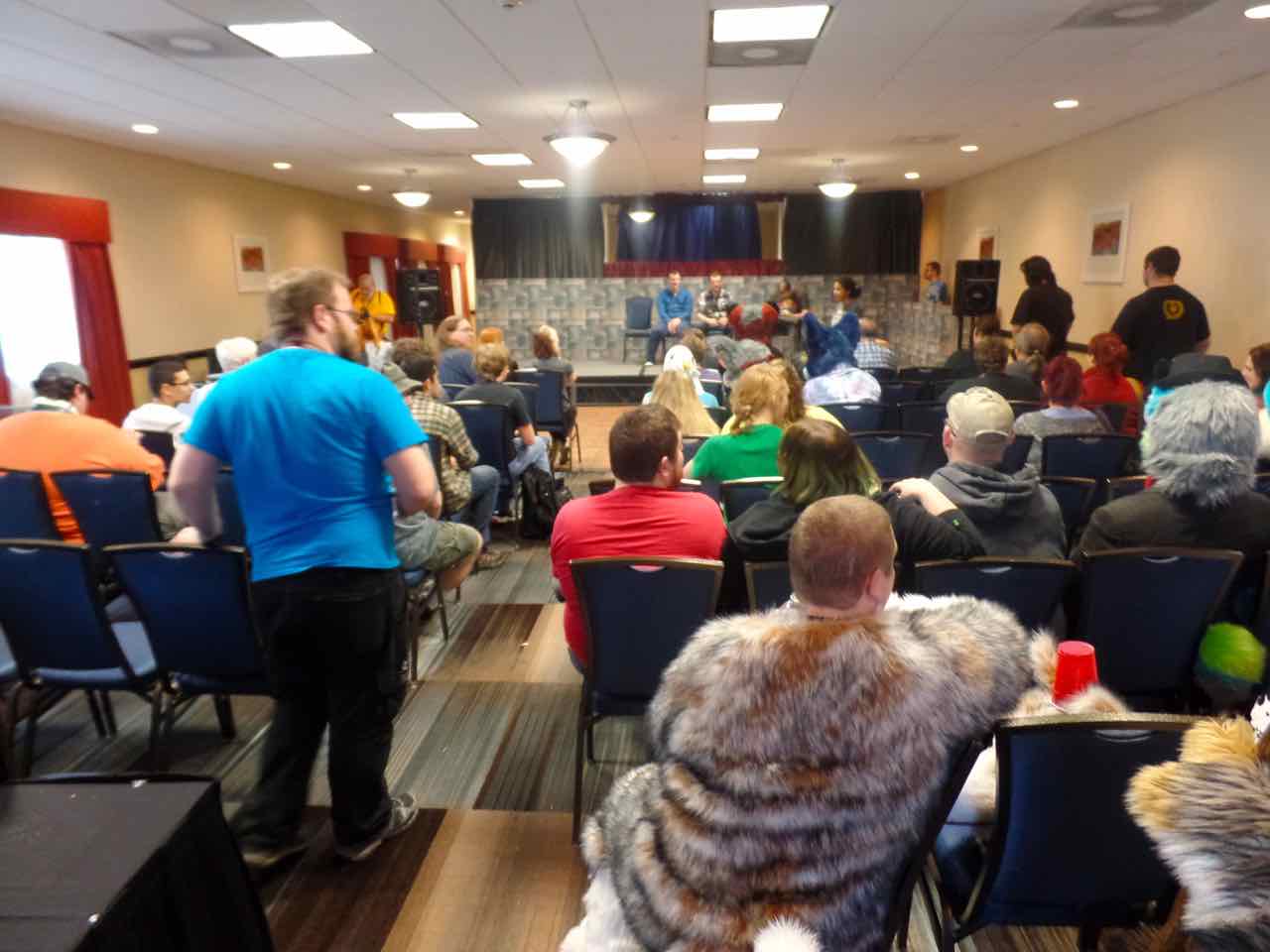 Opening Ceremonies getting ready to cereme. The room was much smaller than the combined ballrooms used in previous years. It's also tucked at the far end of the hotel, past even the restaurant, so it's a bit of a wonder anyone found the place. Yet they did, tolerably often. 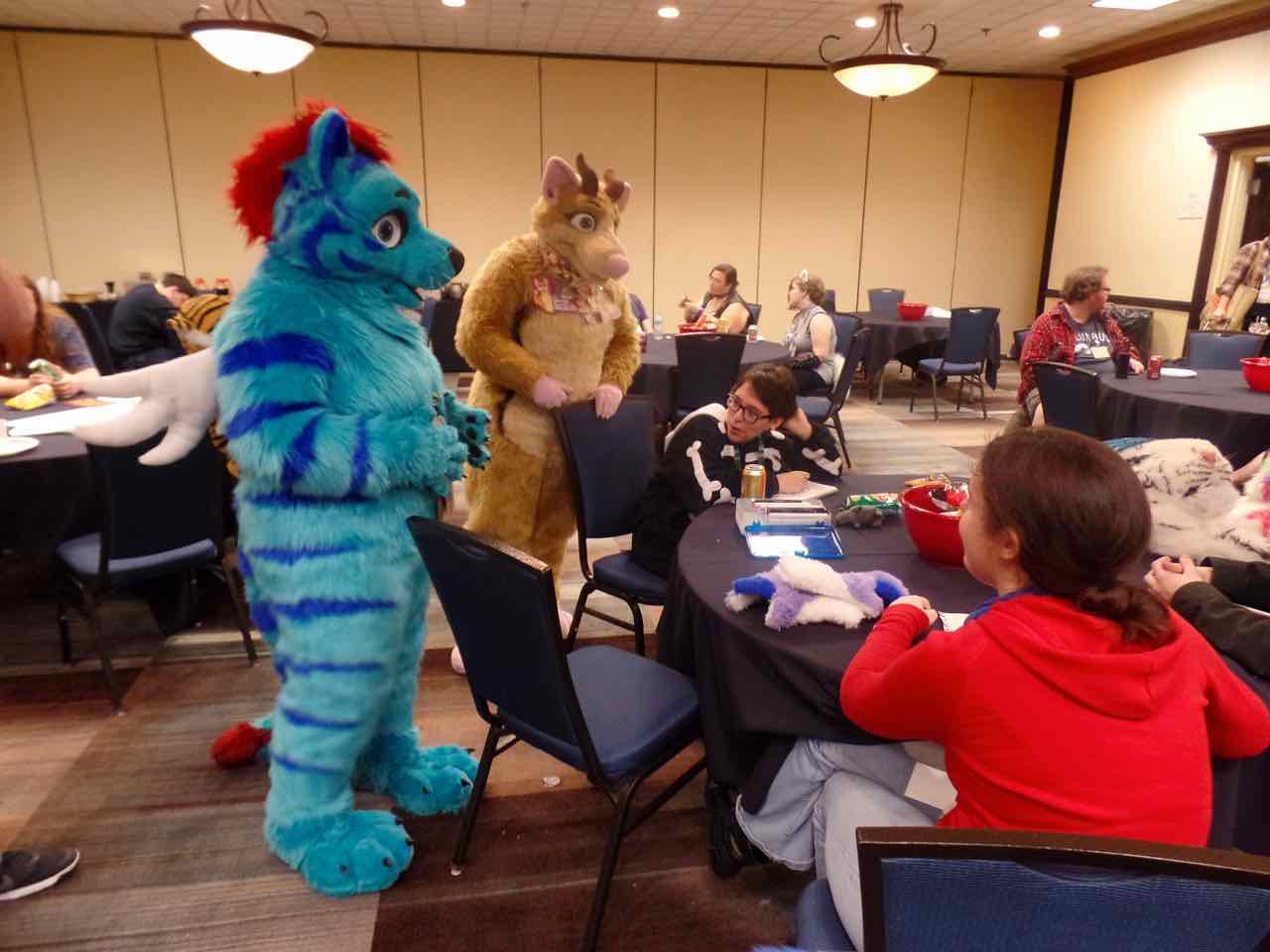 Hanging out in con suite, which had ben the main events room in years past. Morphicon/Anthrohio provides food and drink to everyone, not just sponsors, and it makes con suite always a good, easy, hangout place. I'd drive these people crazy asking for Trash Panda: Yes Or No votes. 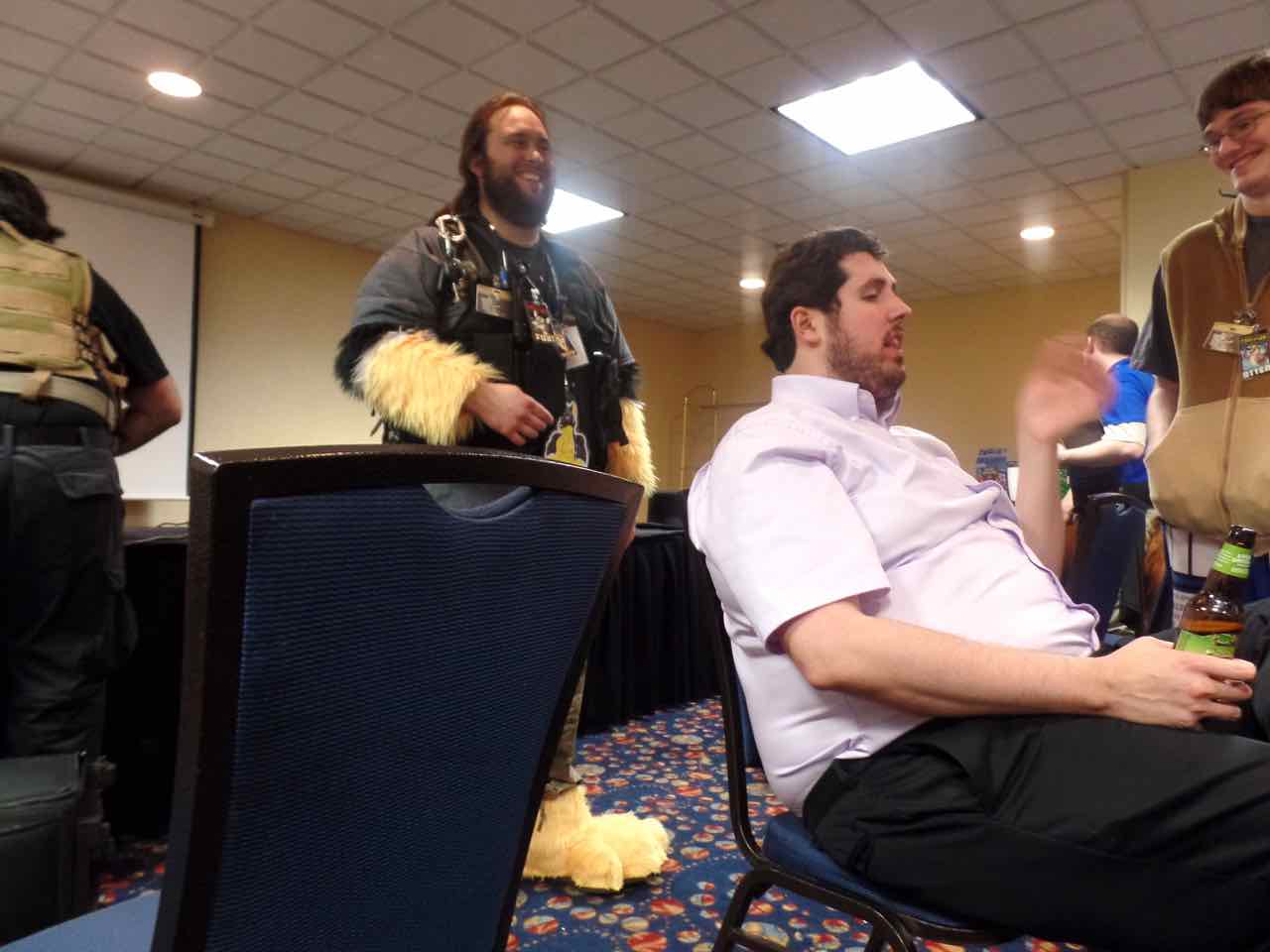 Alkali (up front) tries to carry on as the Mystery Science Theater 3000 even crashes and burns under the attempt to set up a projector and get a movie to actually show. 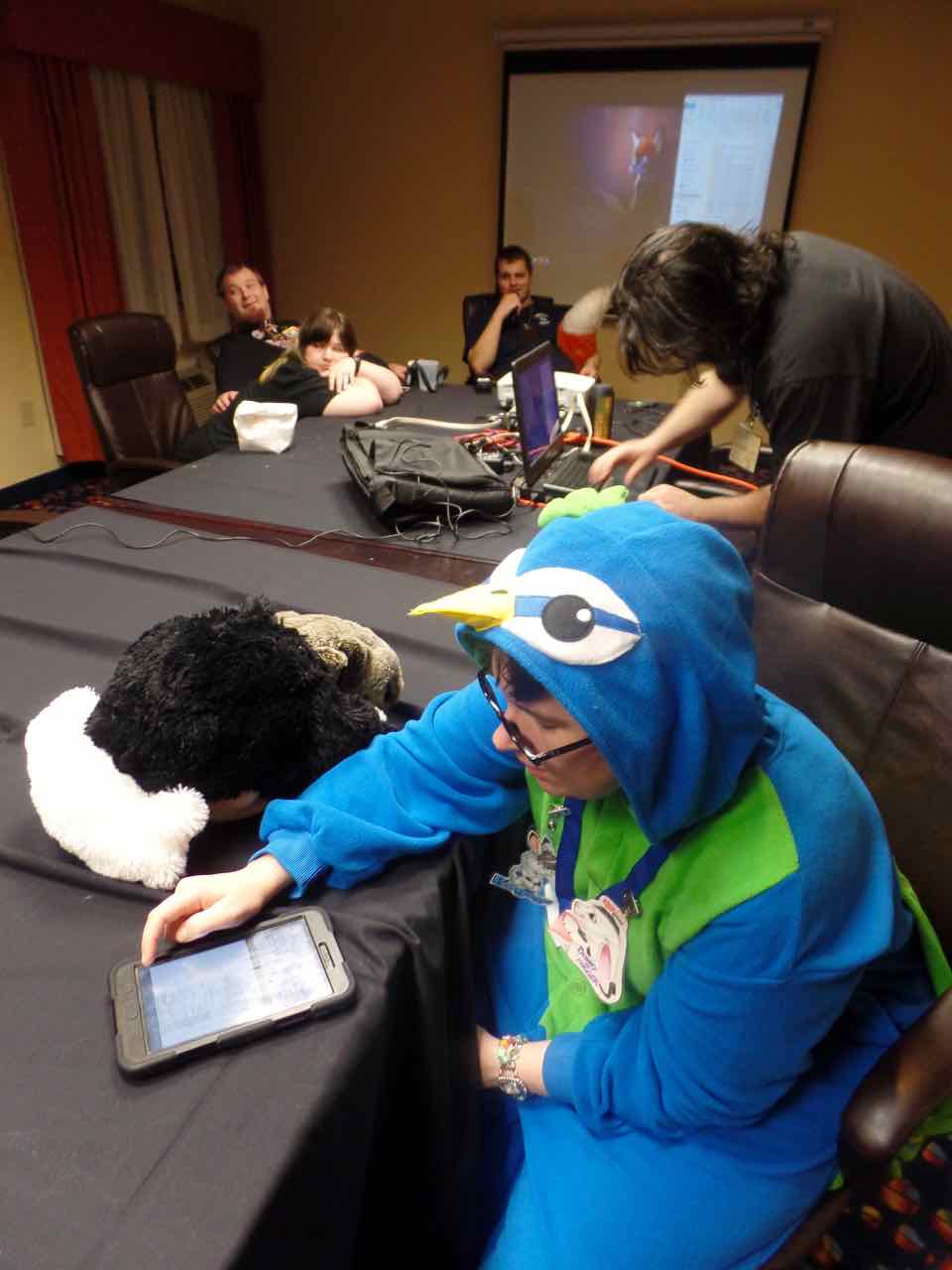 Friday night karaoke! After many a long hour came the show actually working.

bunny_hugger way up front scrolls through the terribly disorganized list of songs. She'd try using 'Find' to search for specific songs, but that caused the tablet to crash.

Trivia: Pioneering discount-department store Korvettes was named by founder Eugene Ferkauf for the small World War II Canadian subchasers, the Corvettes. (The first store was named E J Korvette, the 'E' from his own name and the 'J' from business associate Joseph Zwillenberg.) Source: The Grand Emporiums: The Illustrated History of America's Great Department Stores, Robert Henrickson. Yeah, it seems like there's a little piece missing there.