So here we are back to Humor Blog Awareness Day! Did you know? I've got one with a working RSS feed too. Plase consider reading it for sooner access to humor products like:

Now here's some more of the close of AnthrOhio's Sunday. There'll be one more of these and then I get into more recent stuff. Promise. 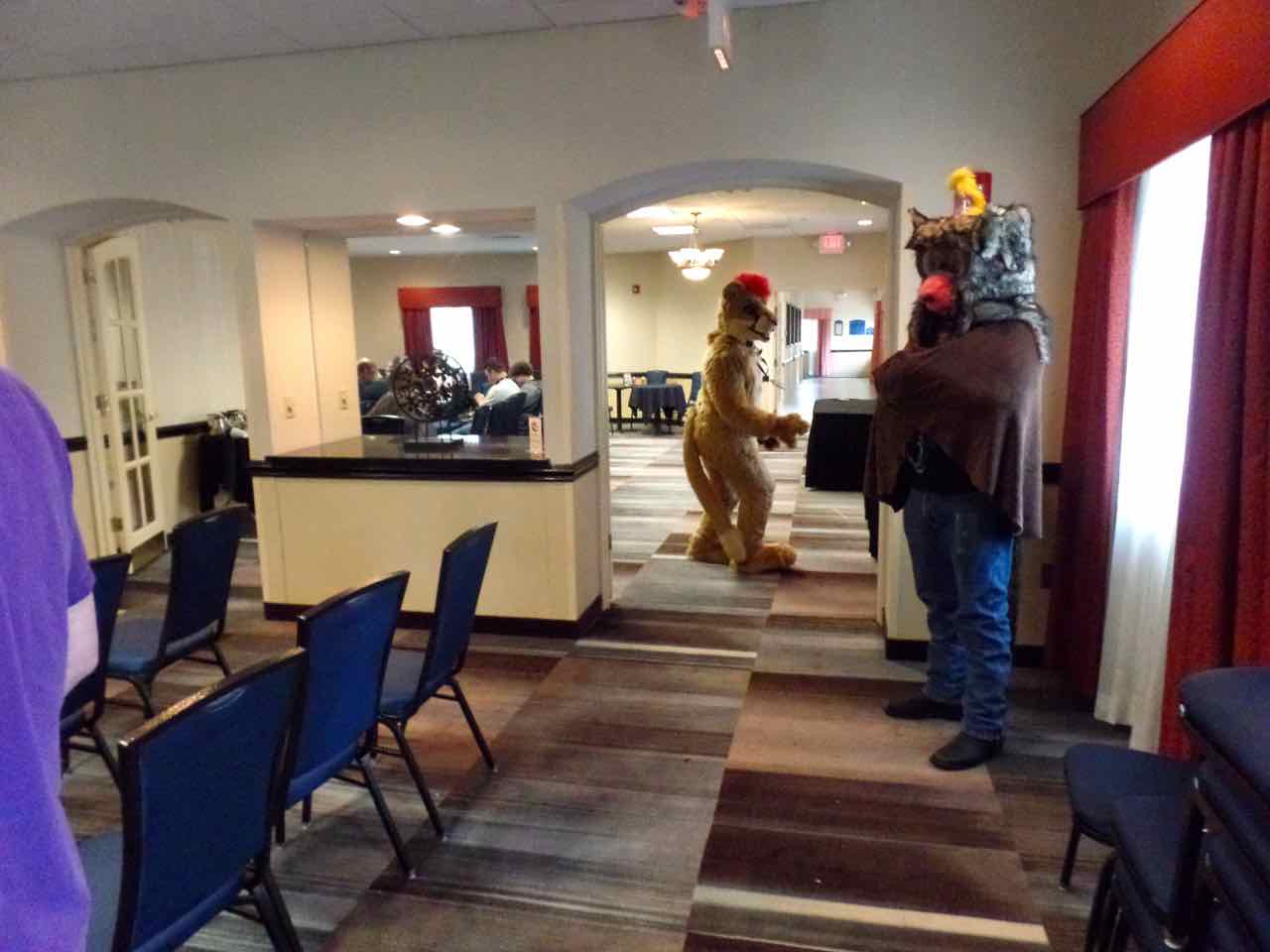 Folks gathering for AnthrOhio closing ceremonies. The figure on the right is the box-head owl, one of the results of the FrankenFursuiting event. The owl-head costume was put into the charity auction and snapped up for a tidy sum, reflecting how it just captured that perfect weird vibe of the event. It's off-putting but not actually ugly, if that makes sense. Should be famous. 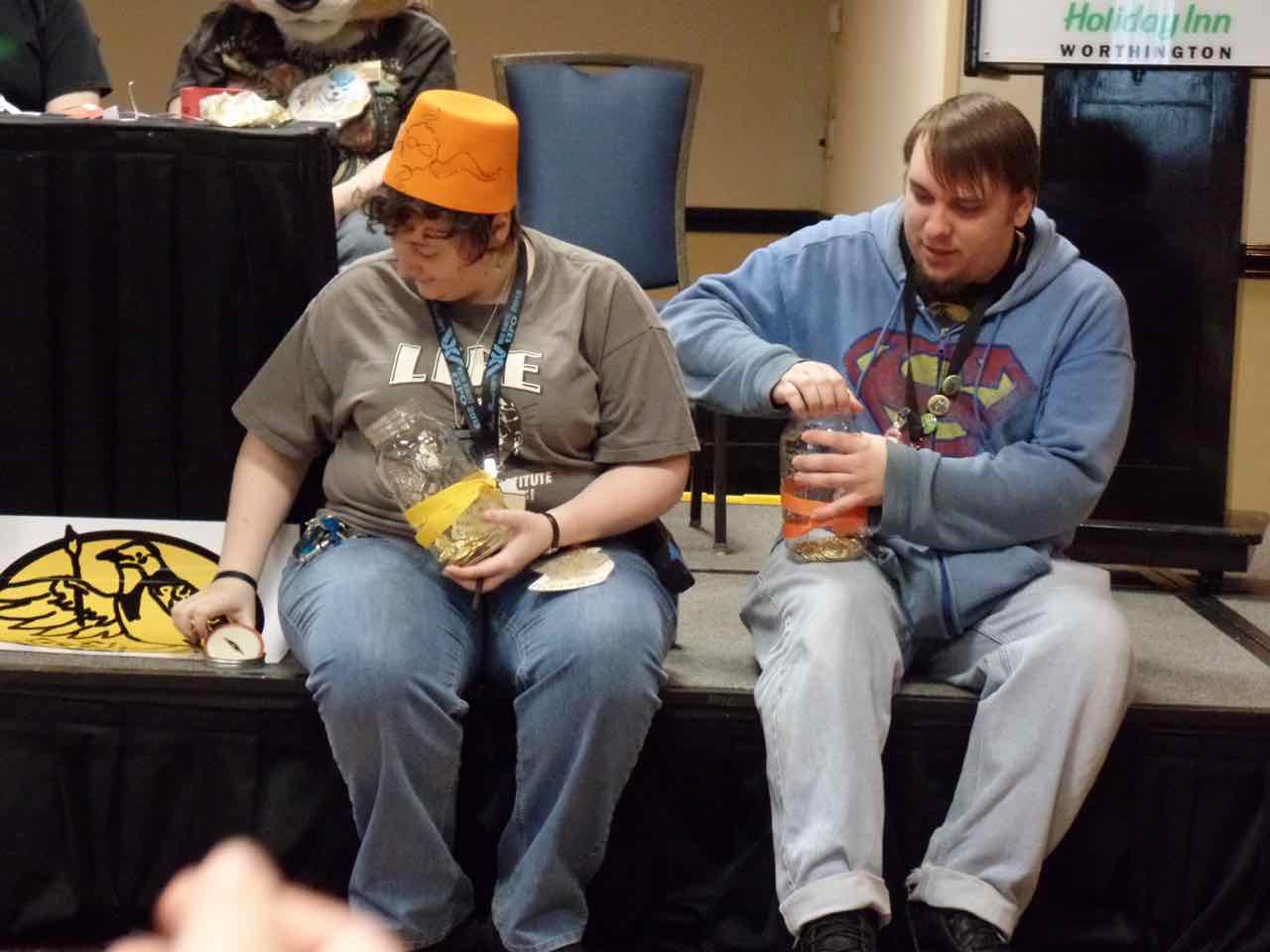 FloppyBelly (left) and ... I'm not sure, actually, as closing ceremonies get ready to start and the convention enters its last minutes. They're gathering up and counting coins from the guild competition thing. 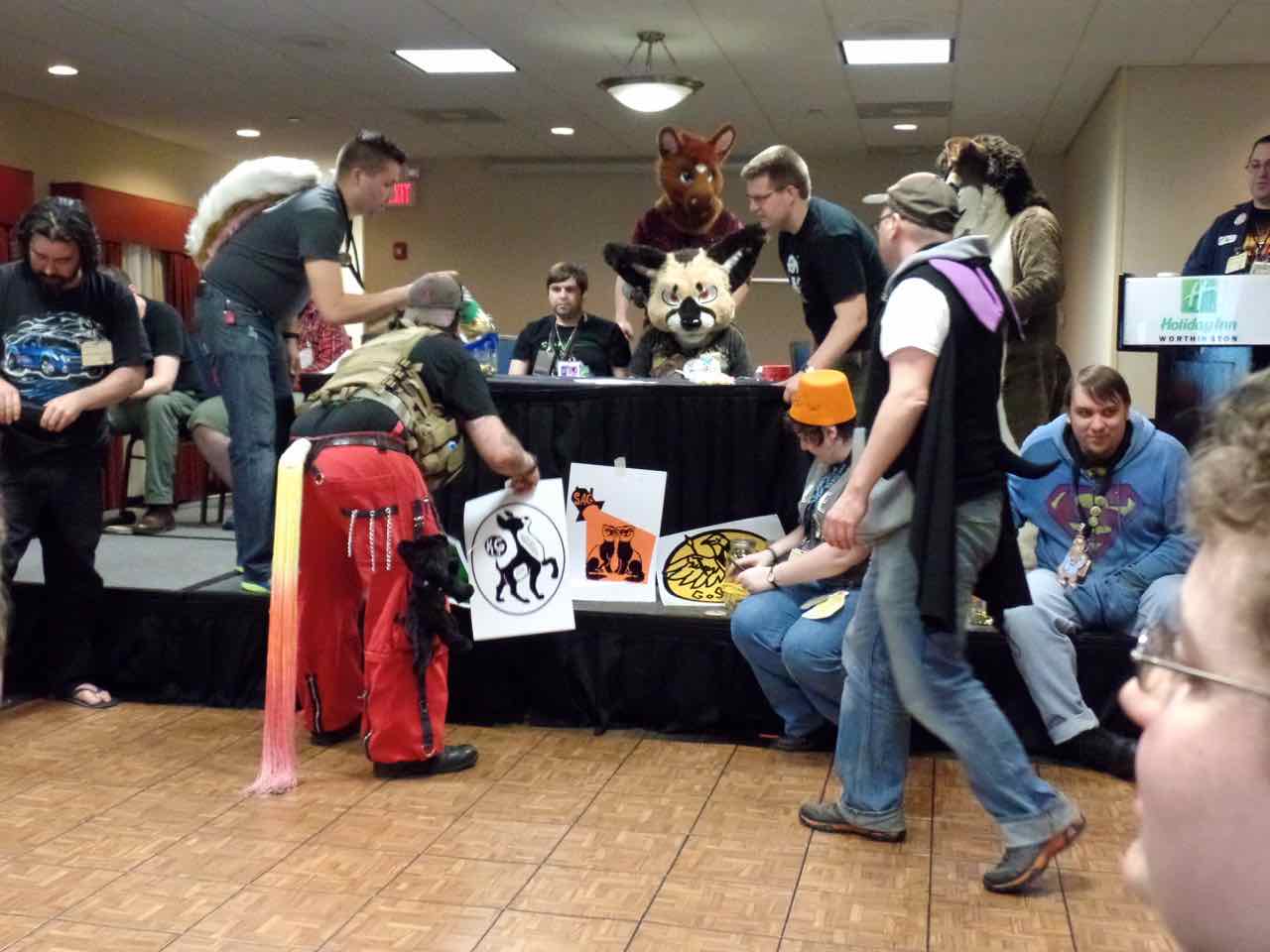 The big moment! Or part of it anyway. Clearing away space for people to gather at closing ceremonies and questions-and-answers and all that. The academic guild, the University of Fowl-osophy, would win handily, to my surprise. Just on the artwork alone I expected the actors guild, with that pair of ferrets doing the masks-of-tragedy-and-comedy pose, to win. 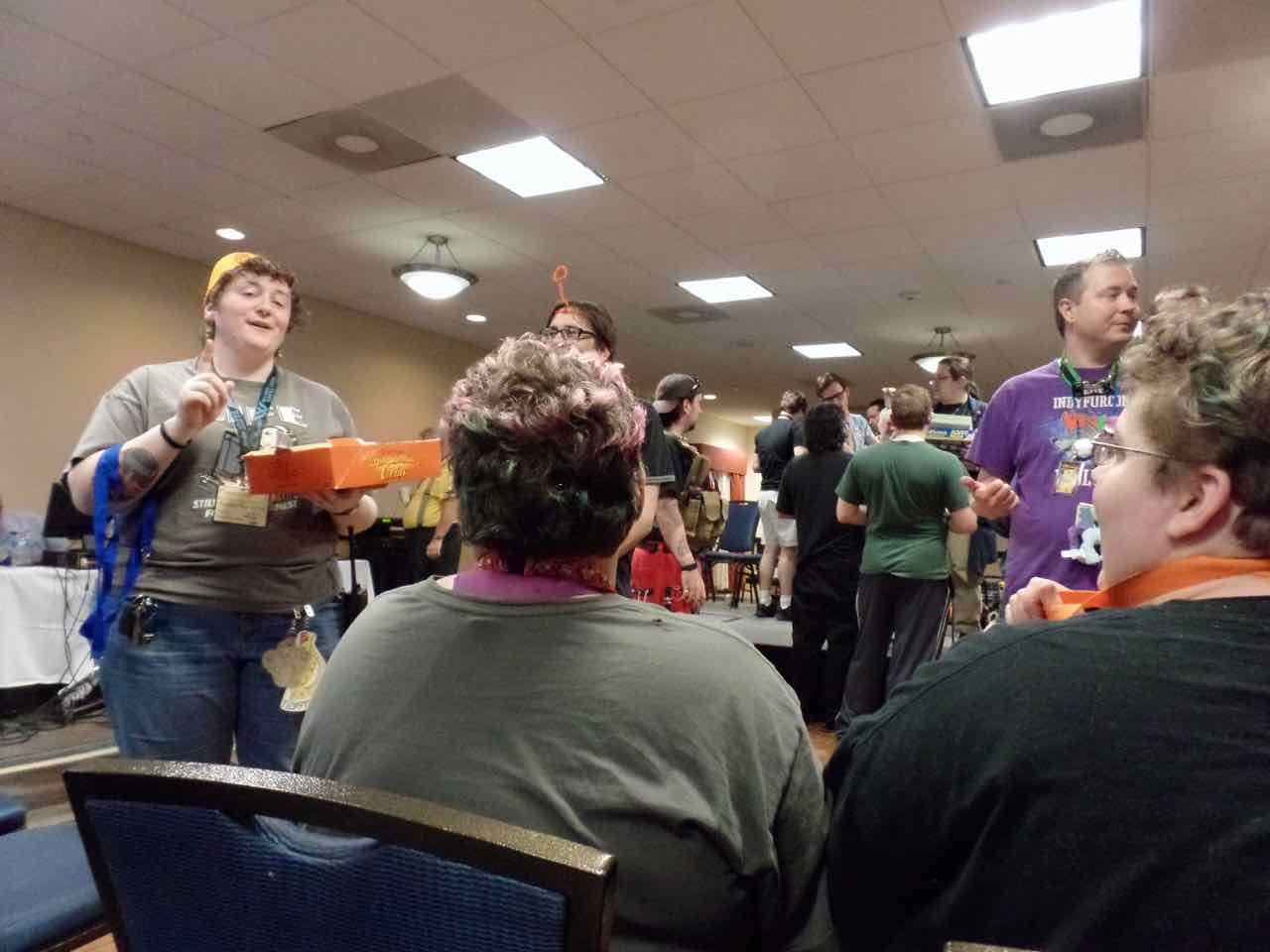 FloppyBelly passes out rewards to everyone who was in the winning guild: little bas of candy. I hope the moment looks fun; it was. 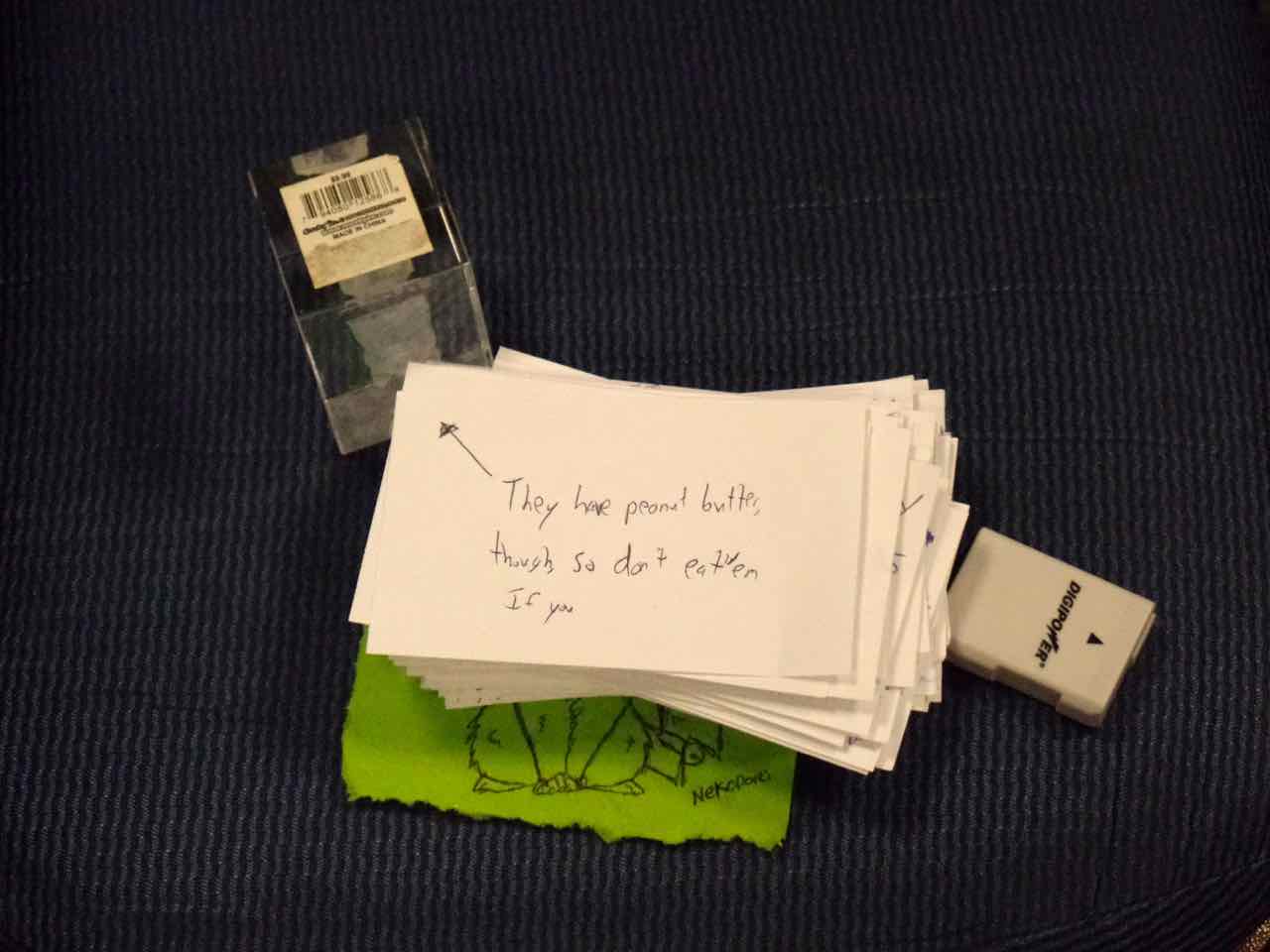 The message board disassembled and the cards stacked up into piles. I don't know what happens to them. I'd like to think someone with the convention keeps them as a weird little archival piece.

Trivia: In 1875 Sir Frederick Evans began eliminating mistaken islands from British Admiralty Charts which he believed to be the results of mistaken positions, mistaken reports, or self-aggrandizing discoverers making up the islands. He struck 123 islands in total, three of them by mistake. Source: On The Map: A Mind-Expanding Exploration Of THe Way The World Looks, Simon Garfield.

PS: Theorem Thursday: Tutte's Theorem, Magic, And Happy Endings, in which I try explaining a graph theory thing that's honestly a bit over my head.