I invite you all to put my humor blog on your Friends Page, or if that isn't good for you, then into your RSS reader, because I'm willing to pretend it's still 2006 when RSS was a thriving thing, instead of being replaced by what we have now, which is irritation with Facebook. But if you missed all that here's the past week's writing there:

And now to some more pictures of our day at Kentucky Kingdom, back at the start of summer: 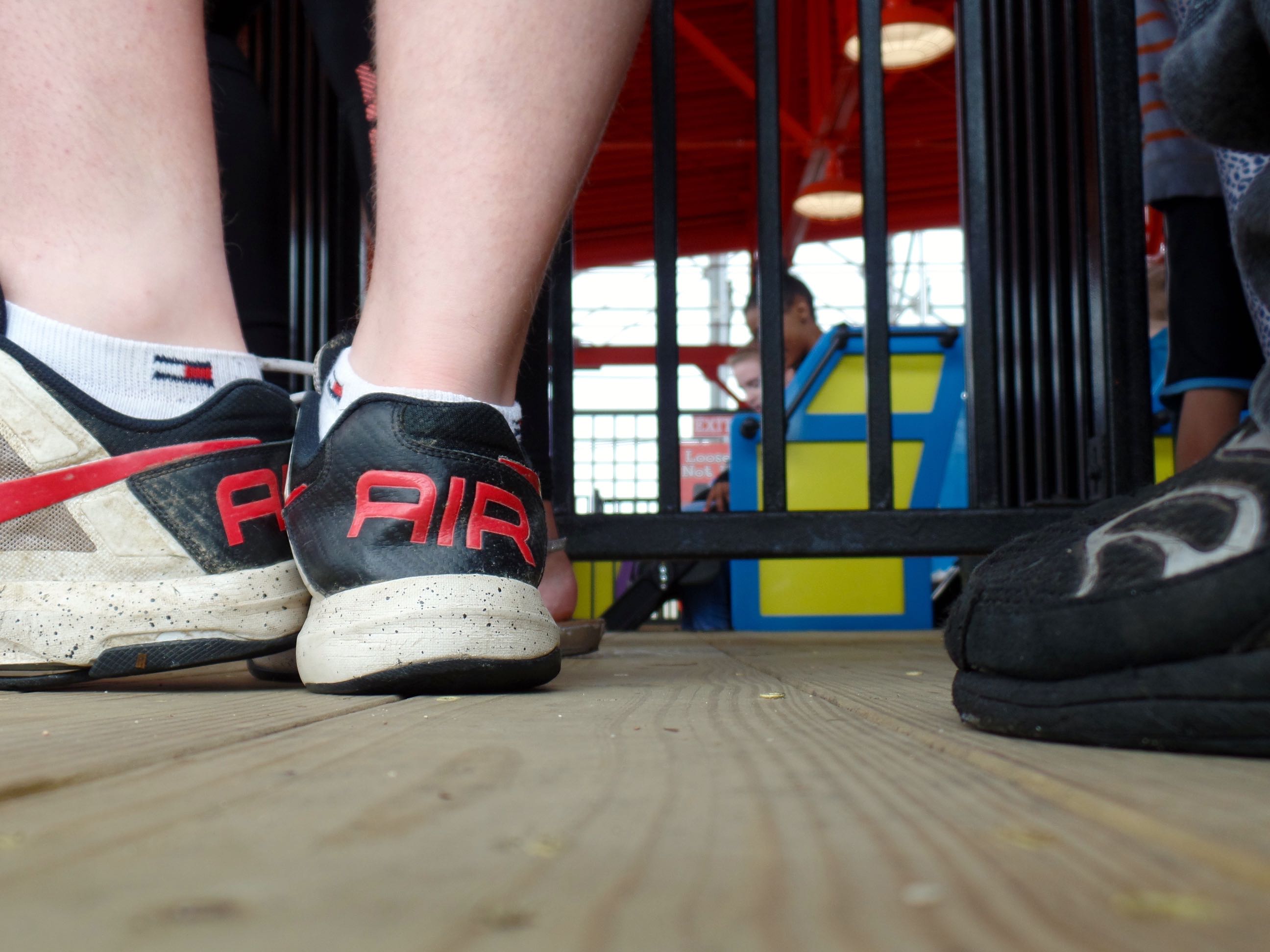 Anticipation ... and a lot of it, since Storm Chaser was waiting for the part where people could get off the ride, if I'm remembering when I took this photograph correctly. I think there was also another little delay as they had to clean one of the cars following a nauseated passenger's unfortunate experience. 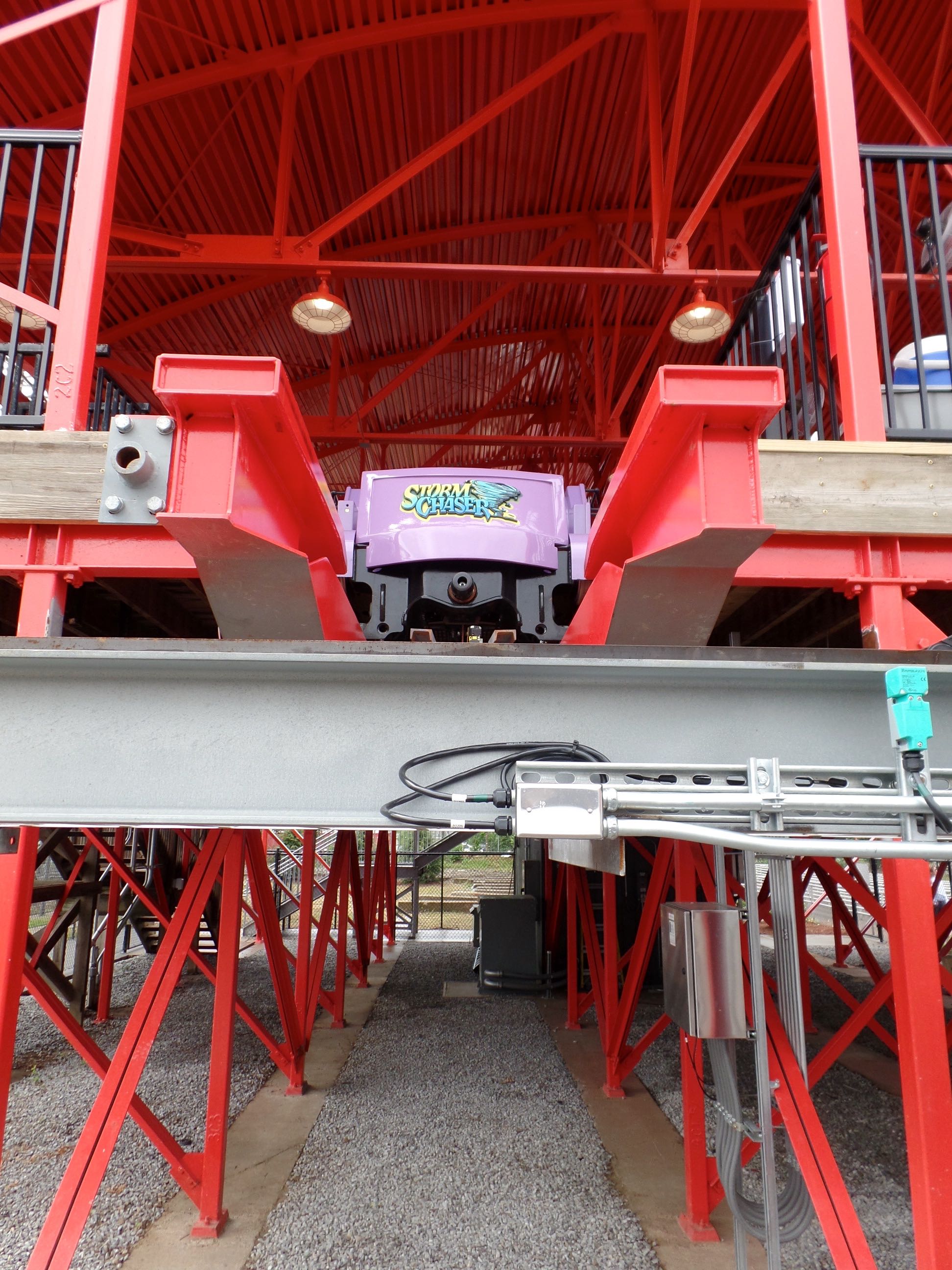 The second train that might run on Storm Chaser. Somehow, because I do not know how they could get it onto the main track. Trains are normally taken on and off by transfer track, which as far as I can tell the ride hasn't got, or by sliding the whole platform the stored train is on into position. But there's no way to slide this into position, since the station (originally built for a racing coaster) is in the way. I would like to know how they transfer the trains. 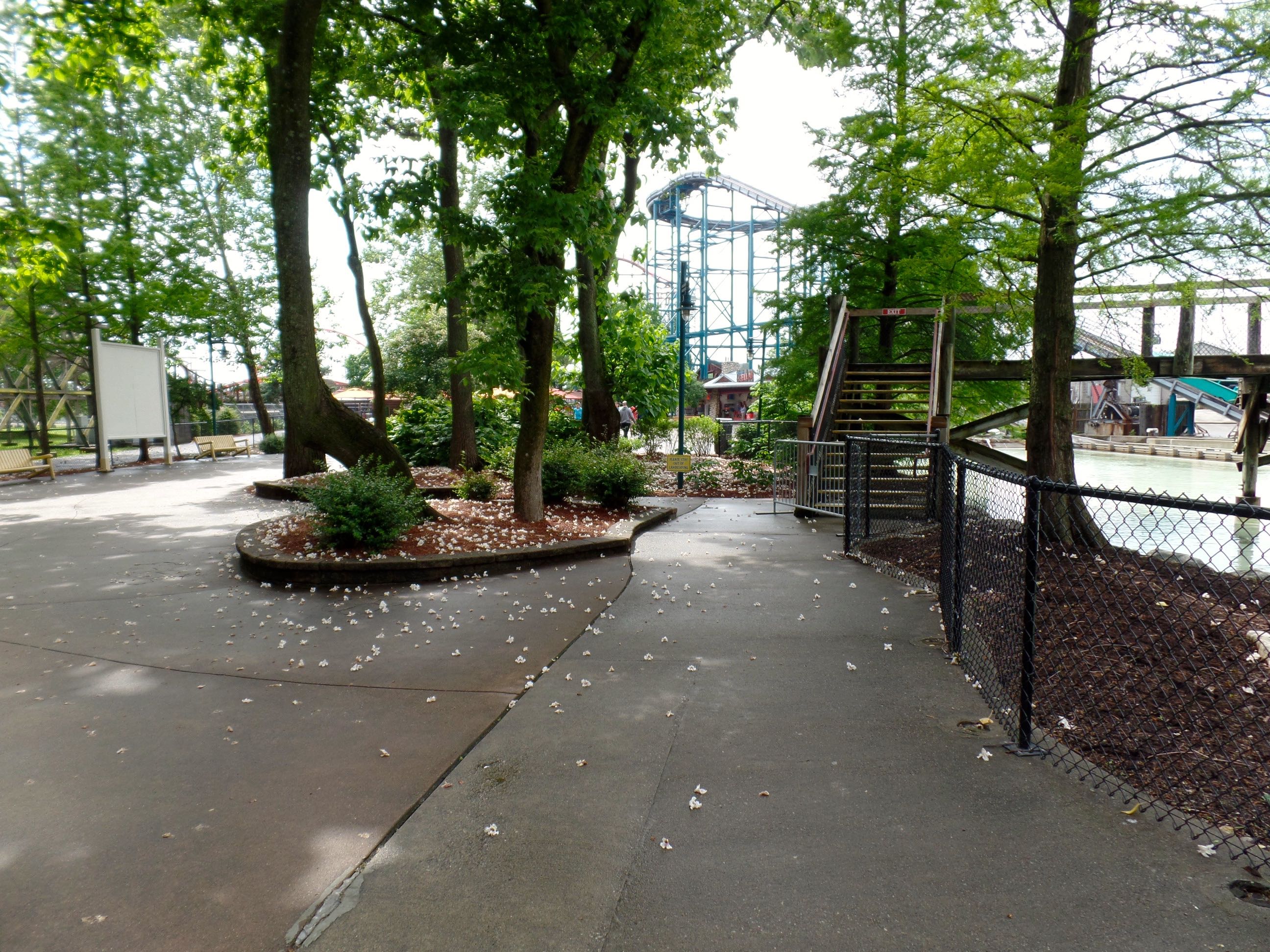 After our wait and ride on Storm Chaser, the sun came out, and it wouldn't rain anymore. Remember that walkway with the soaked sidewalk and fallen blossoms and nobody around? Suddenly it was completely different. 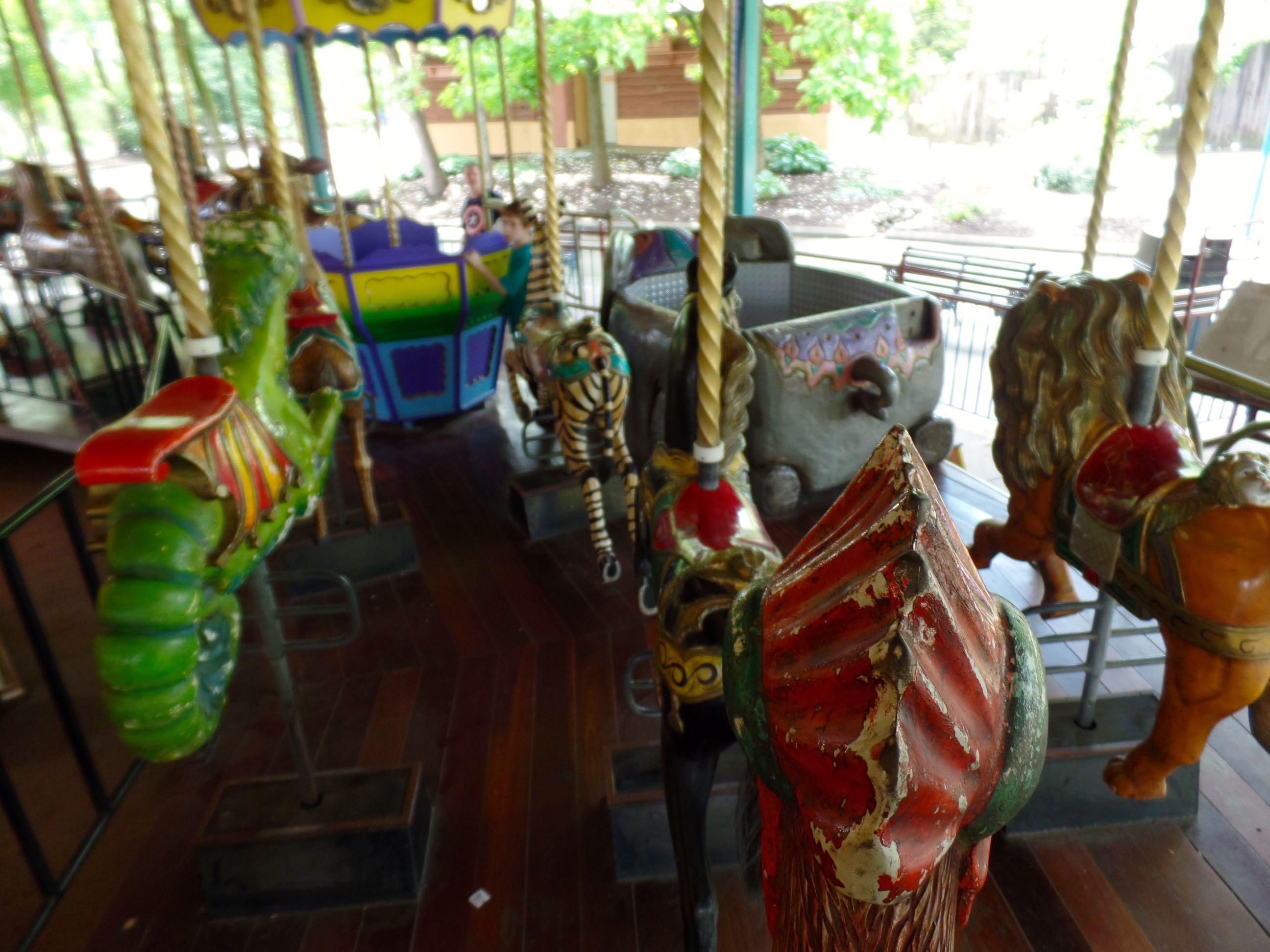 From my ride on the Kentucky Kingdom Grand Carousel. It's a strange one; it's into an antique, but it's got many mounts that evoke classical antiques. And not all from American carvers. On the right, next to the zebra, is an elephant which people ride in. That's a very French kind of carousel ride. I don't understand the ride nearly well enough. 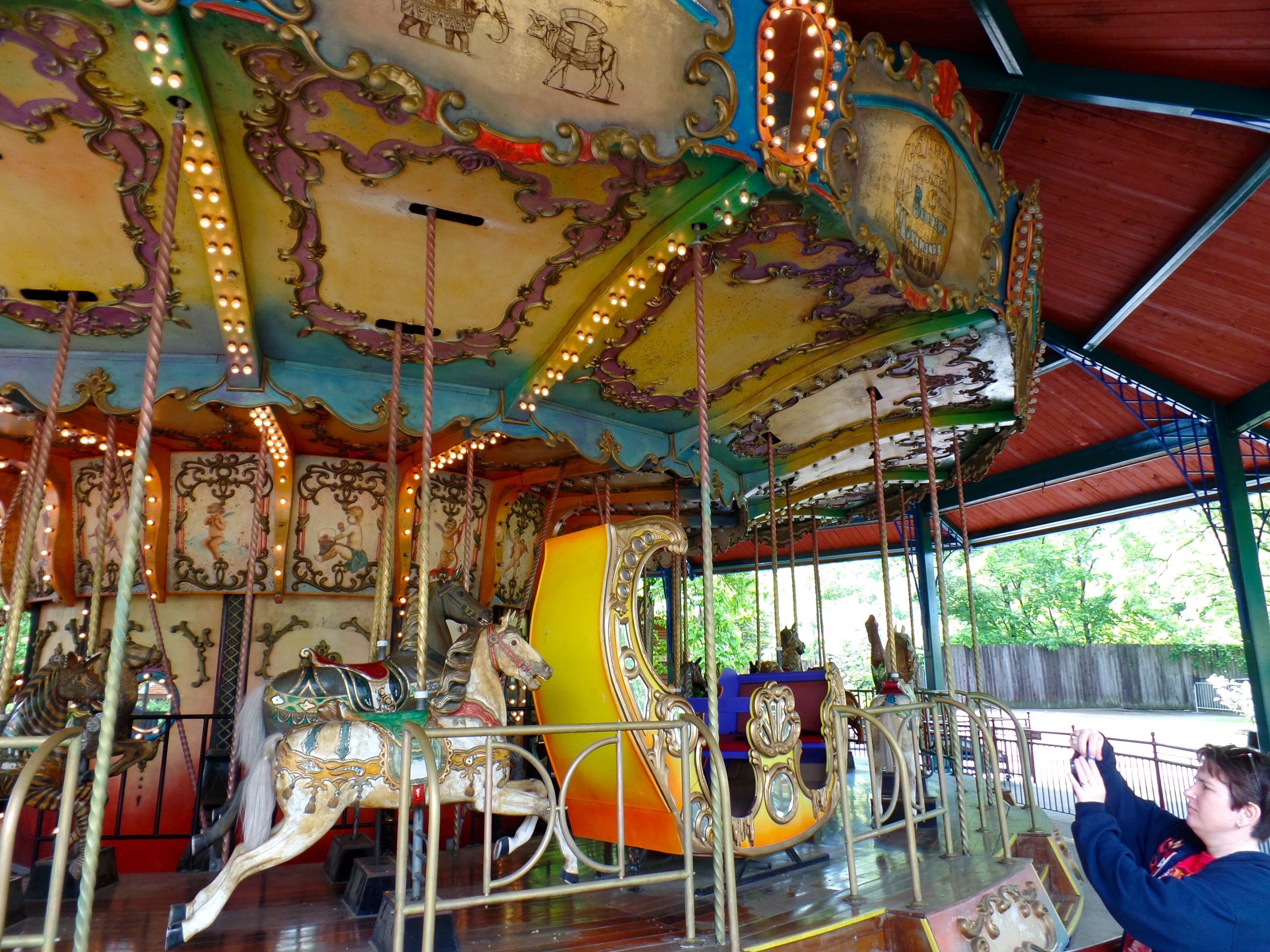 bunny_hugger studies and photographs Kentucky Kingdom's Grand Carousel. It's a really interesting modern thing, one that's almost a quick reference guide to everything the classic carvers were up to.

PS: Why Stuff Can Orbit, Part 3: It Turns Out Spinning Matters, picking up on a bit of mathematical physics I really wanted to. And I put off doing calculus another essay, somehow, even though this kind of started out so I could show off calculus to the proles!