It was a bit of an odd week on my mathematics blog. I got back up to four essays, although one of them was the monthly review of the readership data. Well, if it's not in your RSS, here it is:

With that out of the way, here's the start of some pictures from our visit to Holiday World, which started off our summer. It was the chance for us to see my sister and her husband, and to meet my nephew, and gain family credit for being the first of my sister's siblings to see her son. 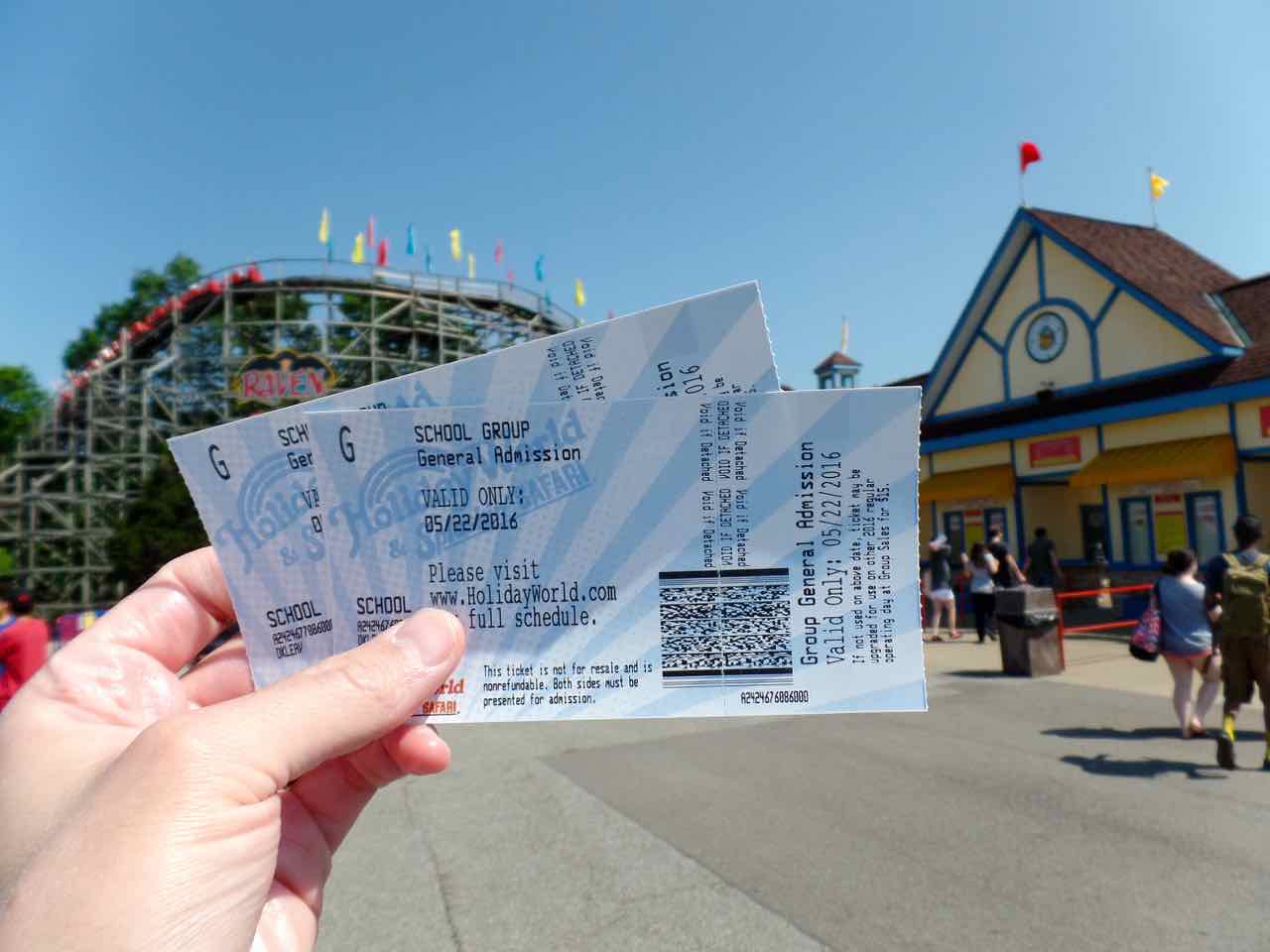 Score! We got to Holiday World as some school group with way too many tickets was entering. They gave us two tickets and so we got in for free and got to enjoy holding real actual tickets in our hands. Always fun. To the right of the tickets is the entry gate. To the left is The Raven, first of their murderers-row lineup of wooden roller coasters. 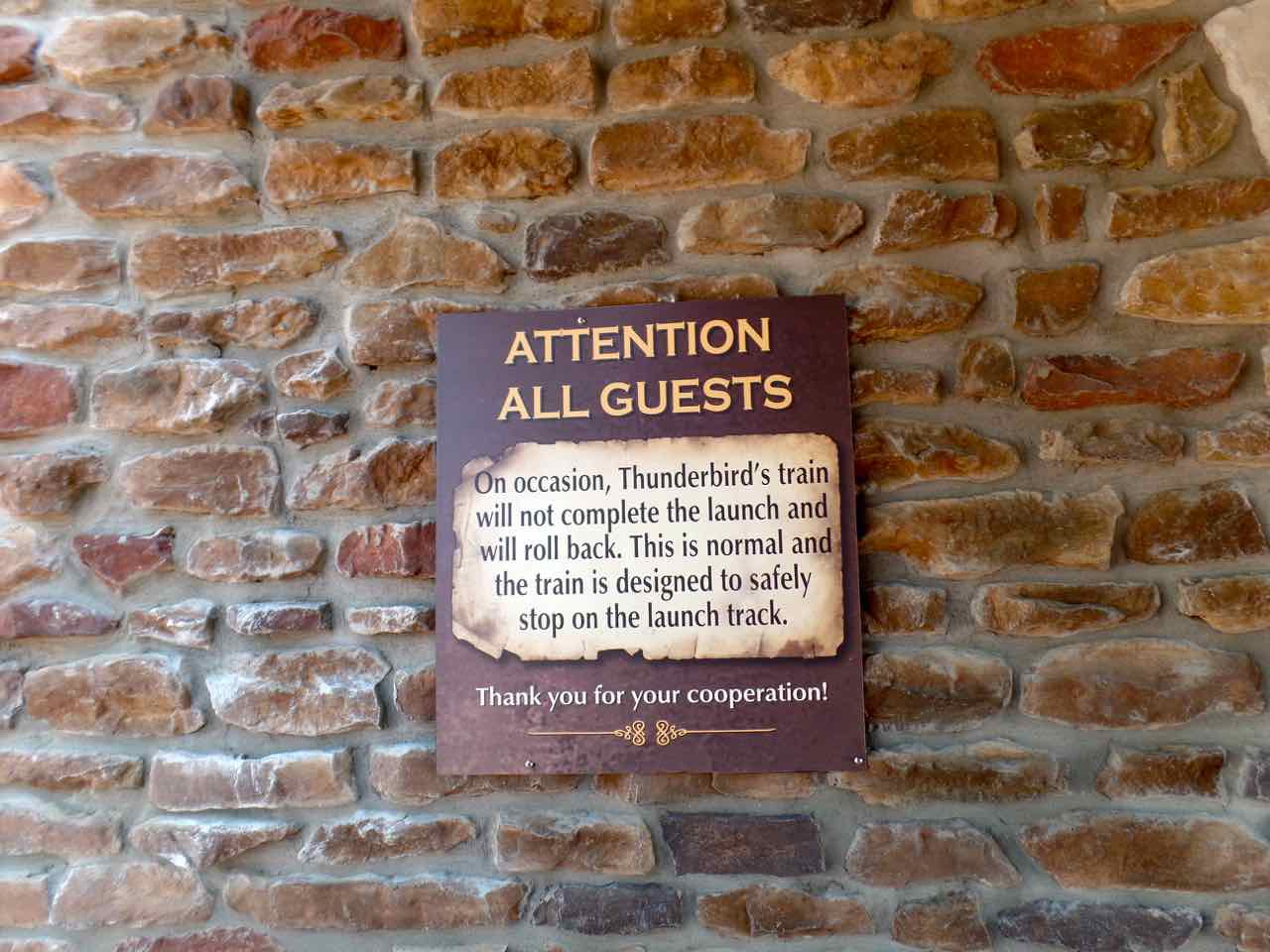 New decoration for 2015: Thunderbird is a launch coaster, getting up to speed basically in the station, and then it propels up the first hill ... apparently, nearly all the time. But since it's possible to not get quite enough momentum to clear the first hill, this might happen. It didn't happen to us, or while we were watching, but I'd be interested in this thrilling and terrifying outcome. 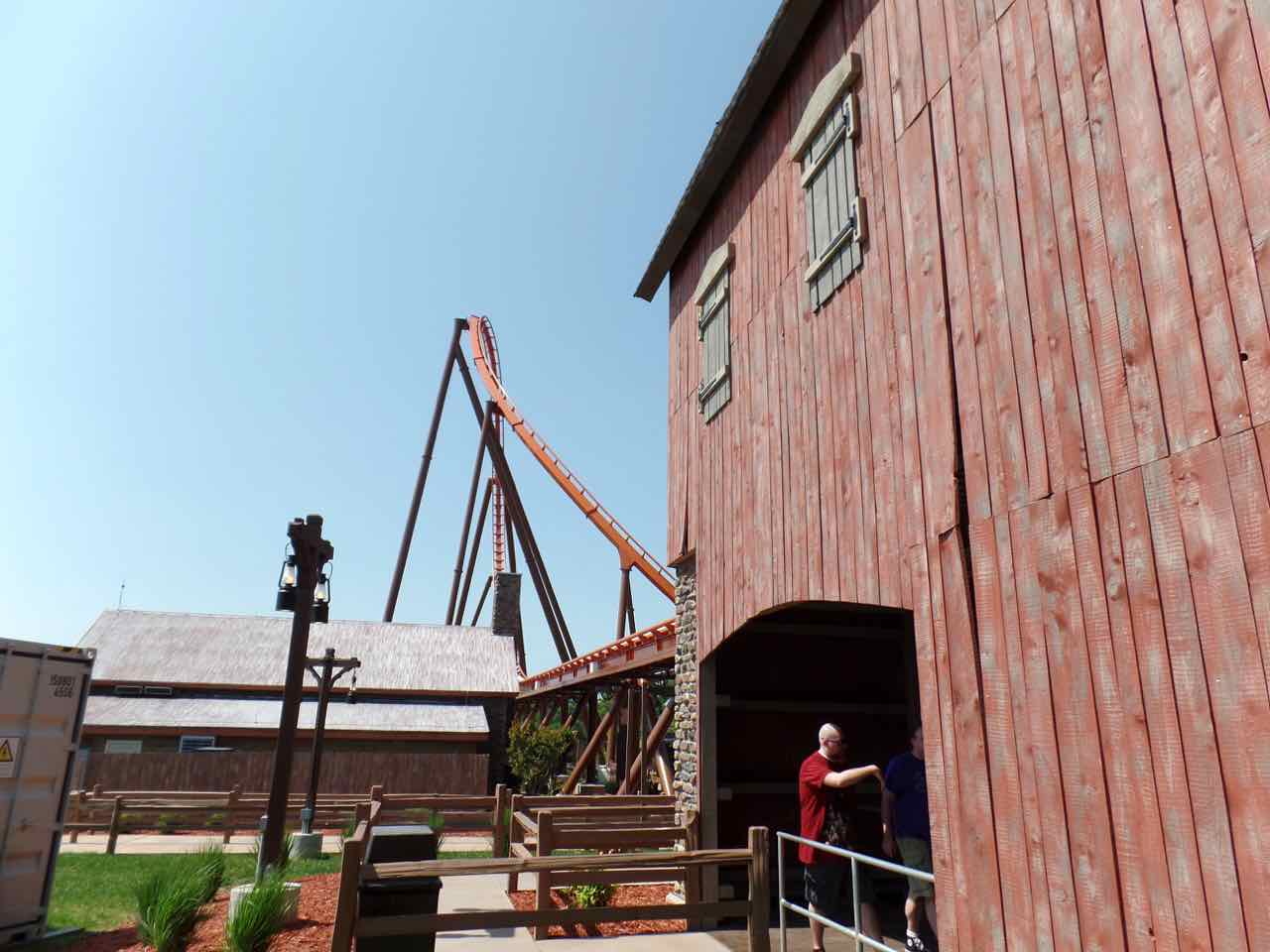 Thunderbird's first hill: it charges out of the barn-style station horizontally, goes up that loop, and then twists around upside-down, moving off to the right. And then it goes on into the woods, past the Voyage wooden roller coaster, and through a pretty exhausting but great set of tricks. 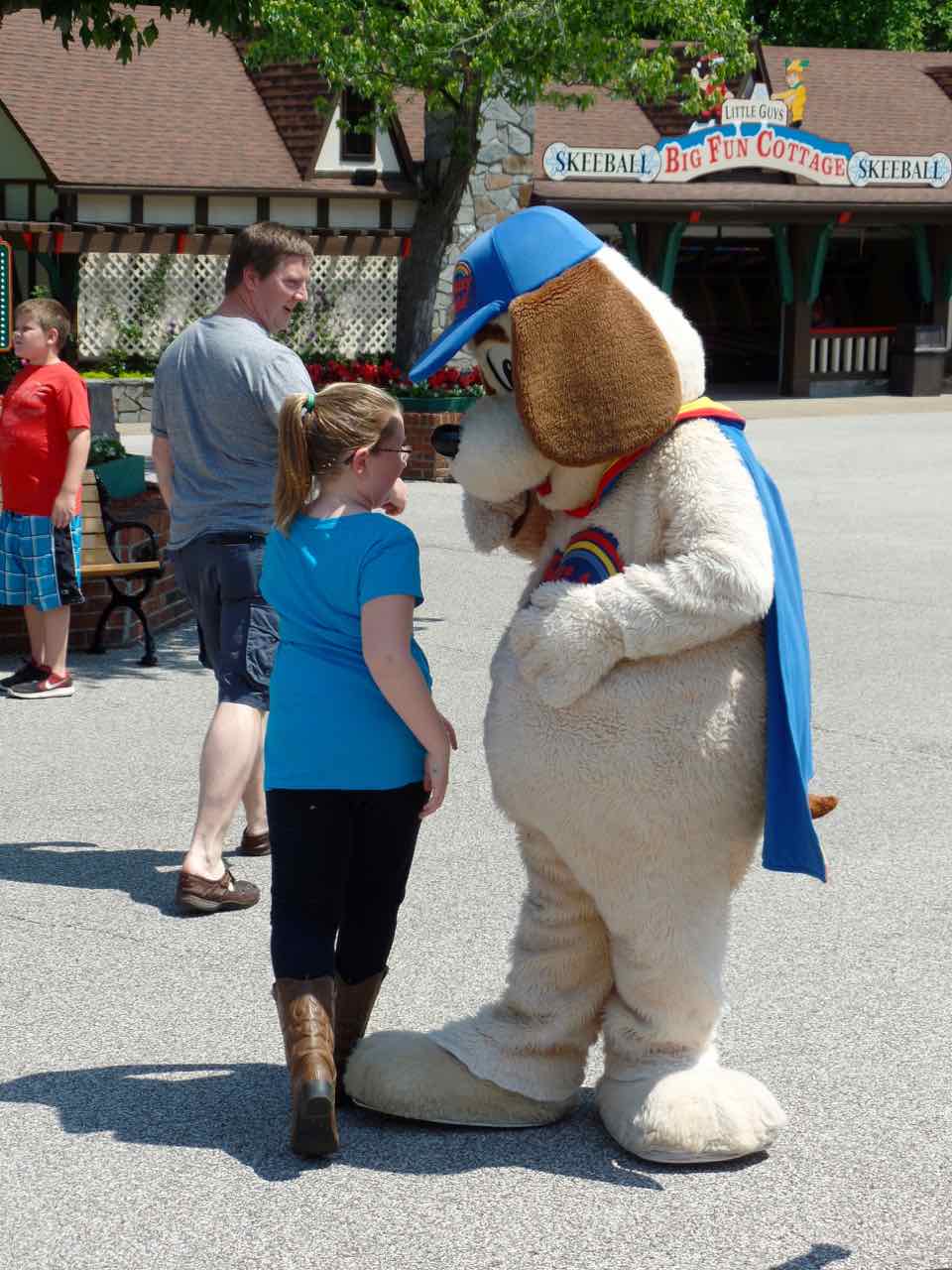 Holidog! Holiday World's second mascot, if you (reasonably) count Santa Claus as the first, out and charming the patrons. They've got five (count 'em) mascots --- Santa, Holidog, Kitty Claus (for Halloween), George Eagle (for Independence Day), and Safari Sam (the crocodile, for the water park). We only saw Santa and Holidog. 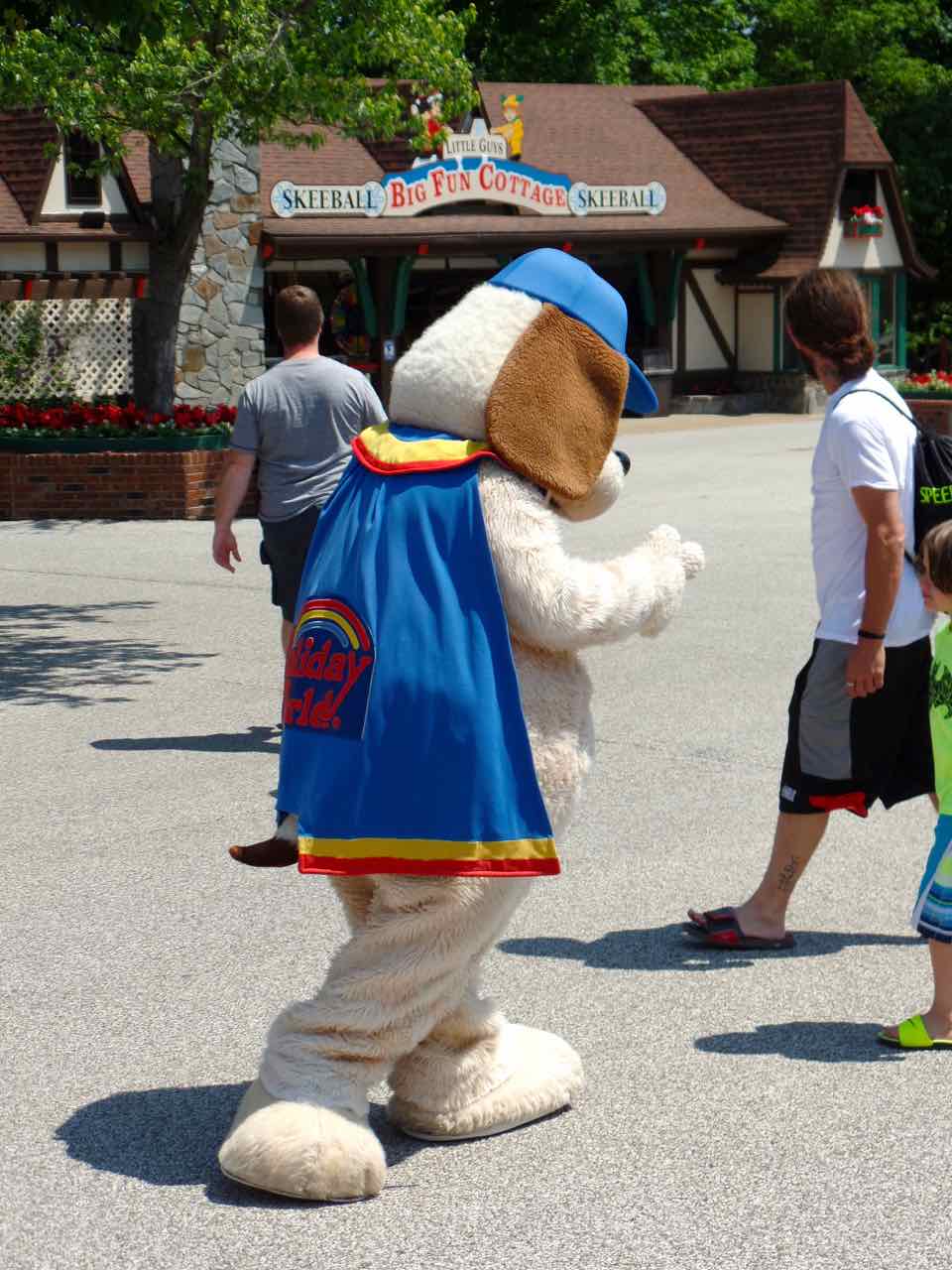 Yes, his cape has a little rectangle cut out for his tail, rather than just being a little shorter or letting the rainbow end go over his tail. 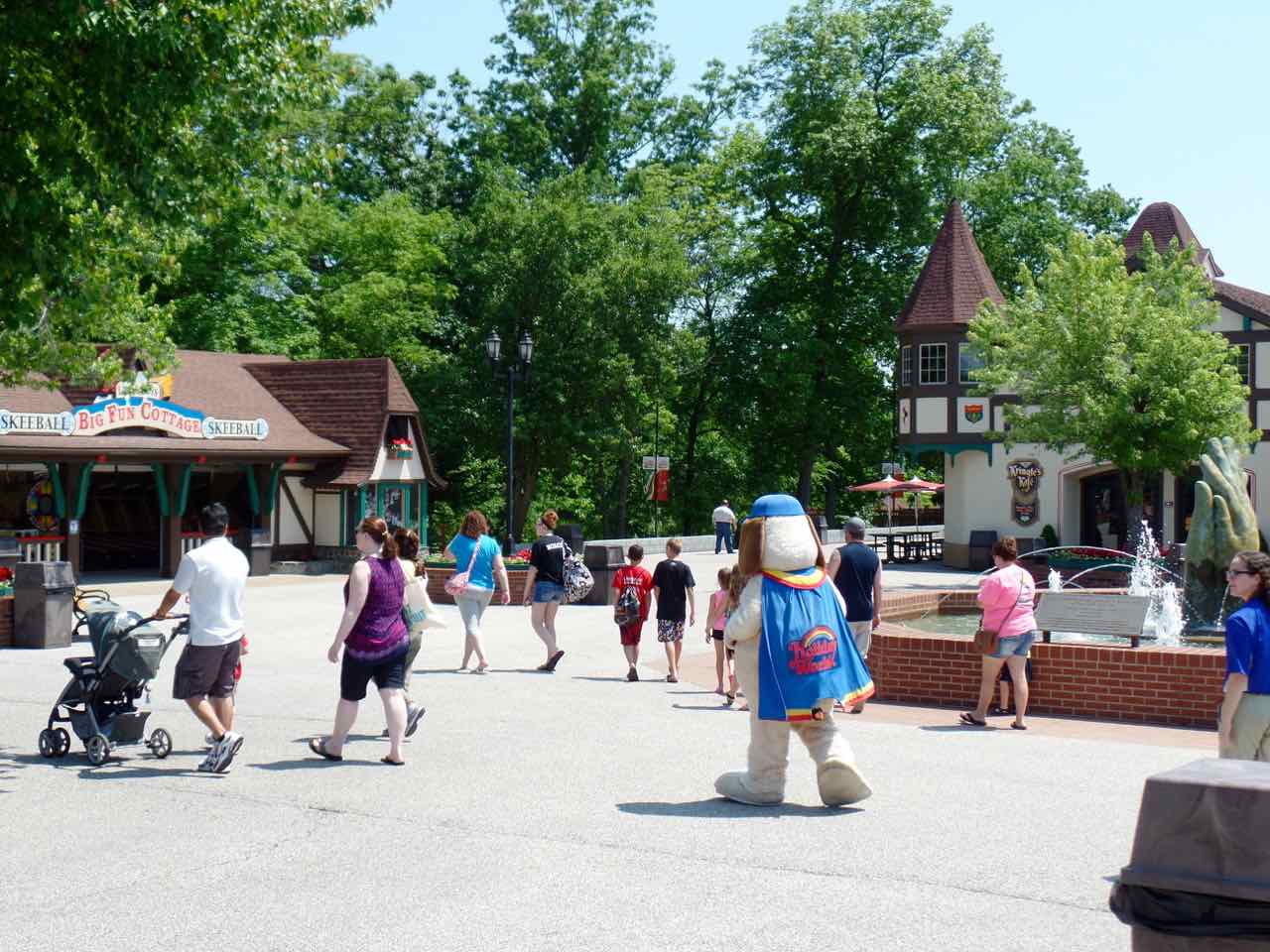 After charming folks up front, Holidog goes back to the hard work of being superhero-caped and holiday-themed.

Currently Reading: Flash Gordon and Jungle Jim, Alex Raymond, Don Moore. Editor Dean Mullaney. Featuring Dr Zarkov muttering how ``If I could only finish my machine for bending and destroying light,'' raising once again the question of what exactly his area of concentration is. Shed no tears for him, though. He gets two days to work on his project and completes his light-destroying machine, which really shows up all of us who needed a full week just to clean out the guest room.