Another busy week on my mathematics blog, so I'll move on past mentioning RSS For the people who have somehow missed all mention of it before and give you the summary of recent links:

Now let's get back to the 4th of July and the Lansing Lugnuts ball game. 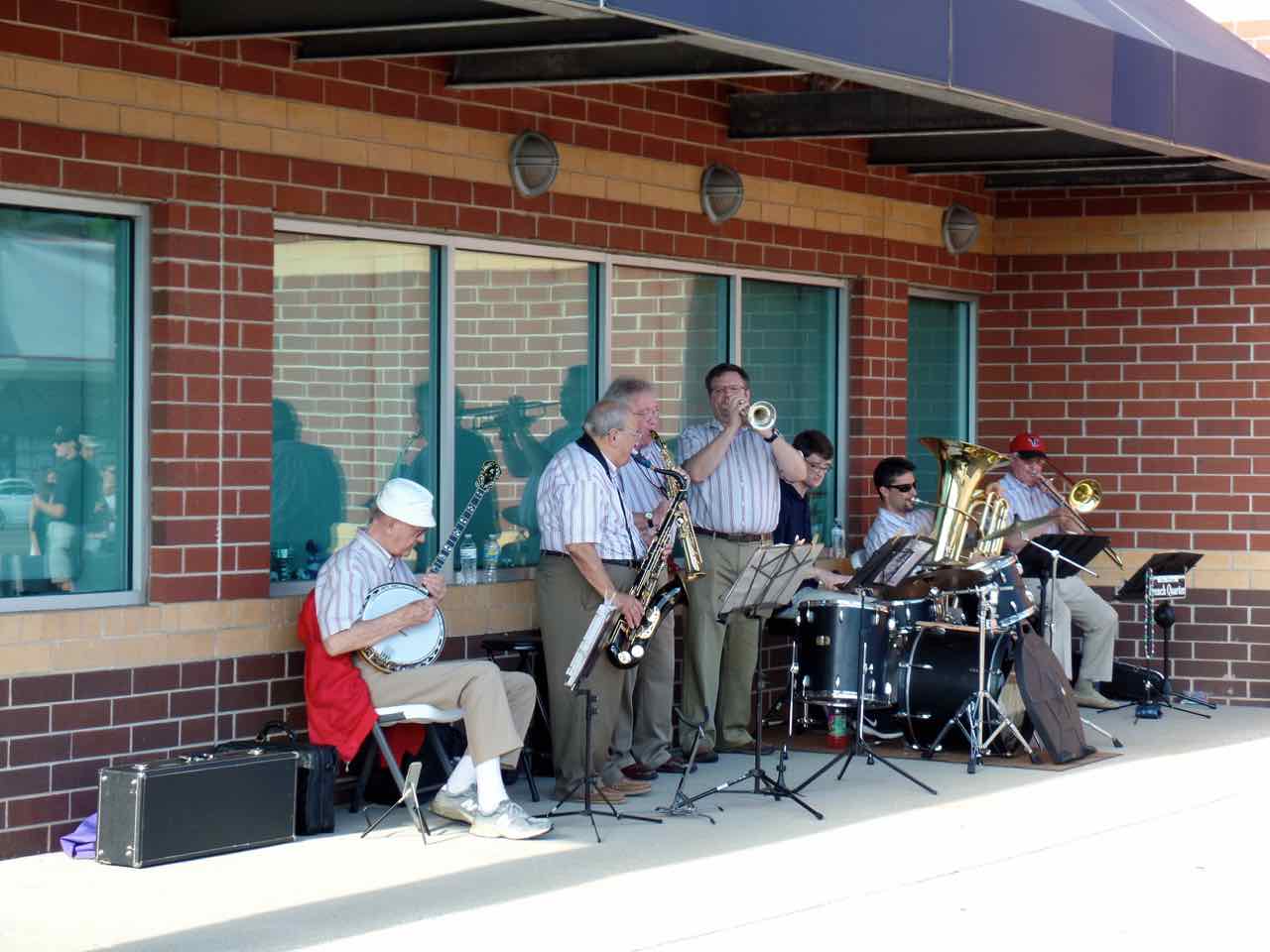 Band outside the Cooley Law School Stadium, where the Lansing Lugnuts play. This was a Fourth of July thing, I'm pretty sure. At least I haven't noticed bands there other games. 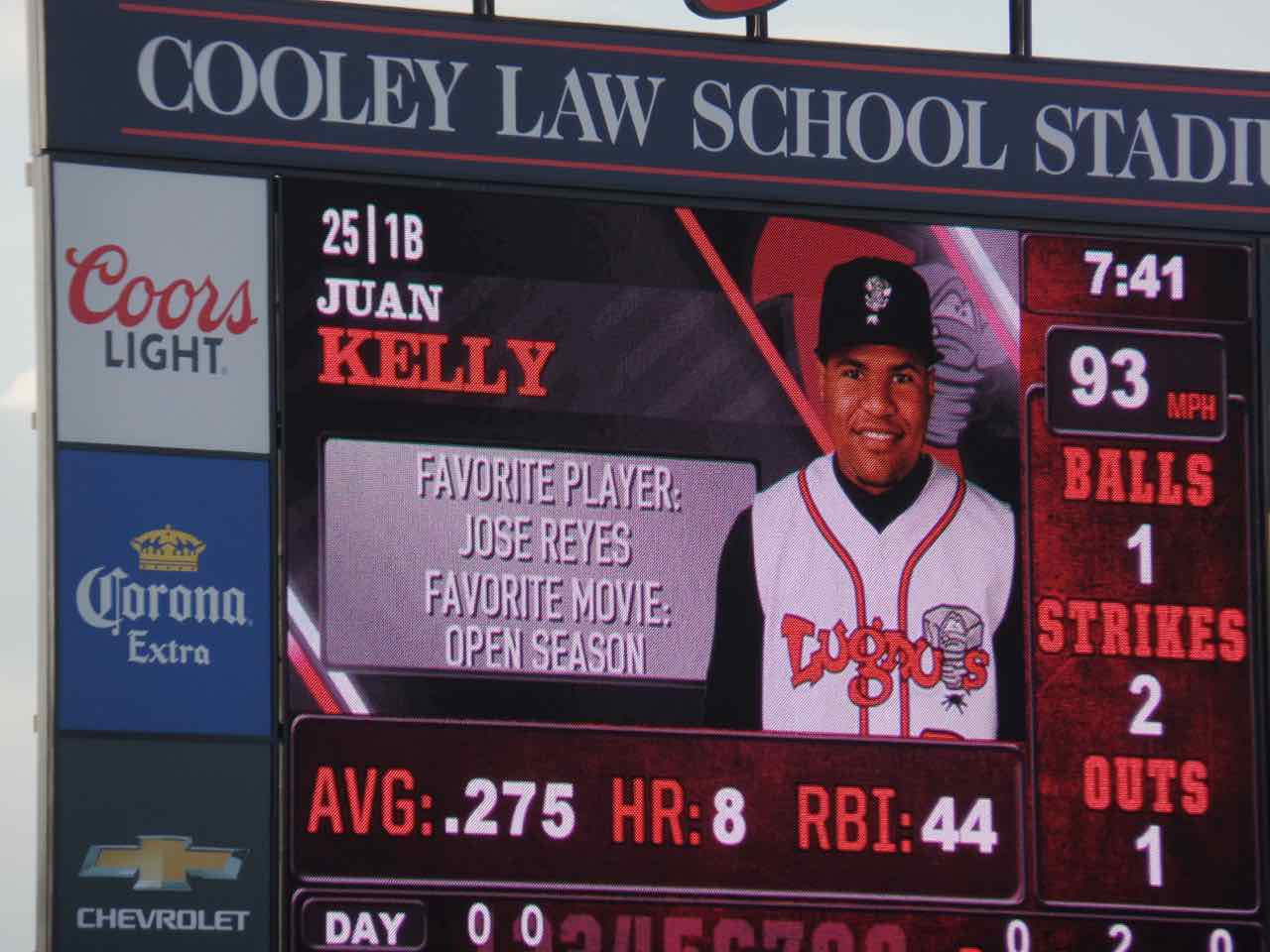 The first time each of the Lugnuts bat the scoreboard gives us some information about them. But then how do you get to like someone whose favorite movie is Open Season? And there were others whose favorite movies were things like Billy Madison. Don't they get instructed to answer, like, The Natural or Bull Durham? The heck, Lugnuts? 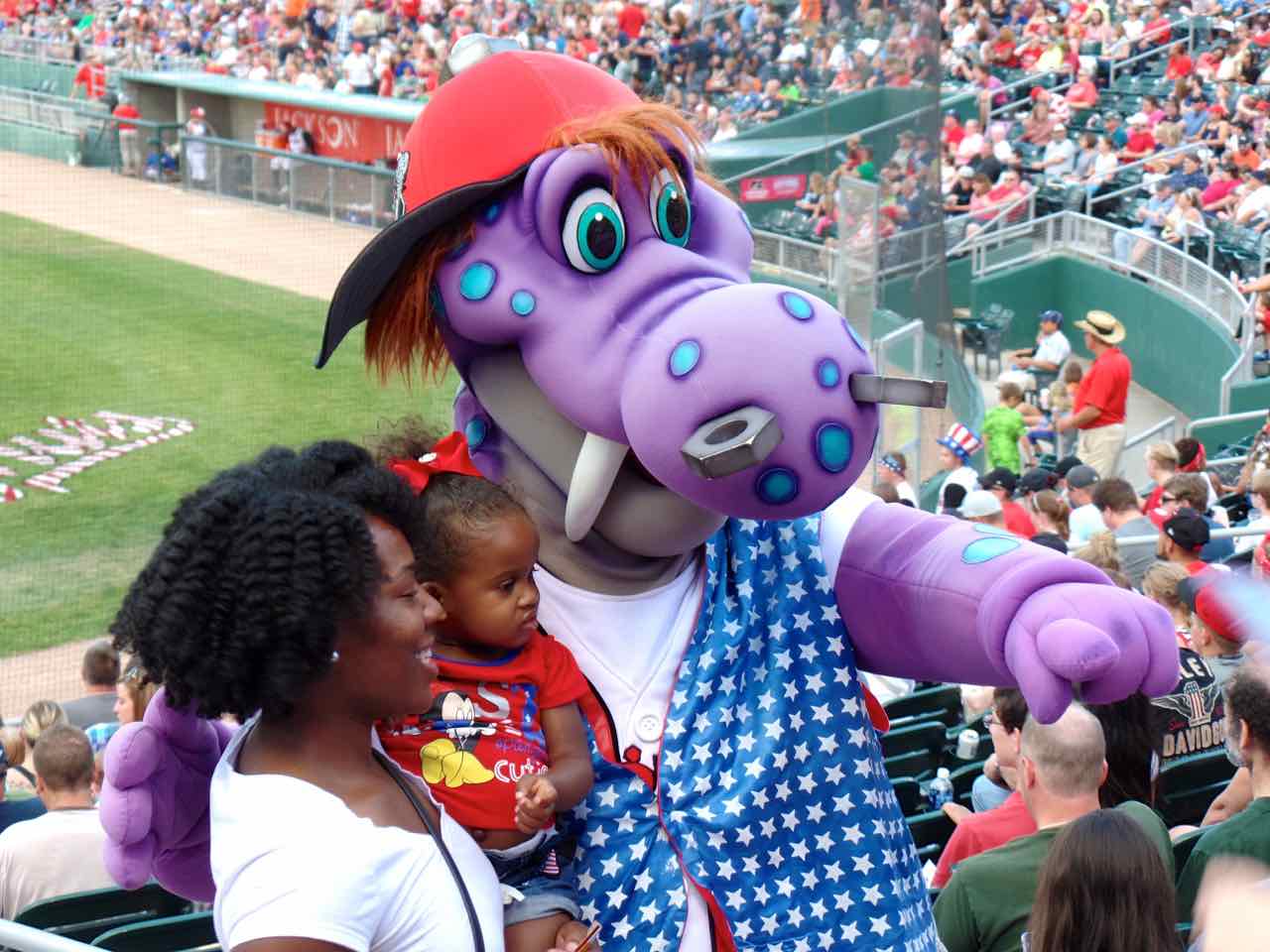 Big Lug, the dragon-based mascot of the team, works the crowd. This is the closest I've been to him. Little Lug has not been seen in years and

bunny_hugger cries out for an explanation whenever she does see him. He's stayed silent. 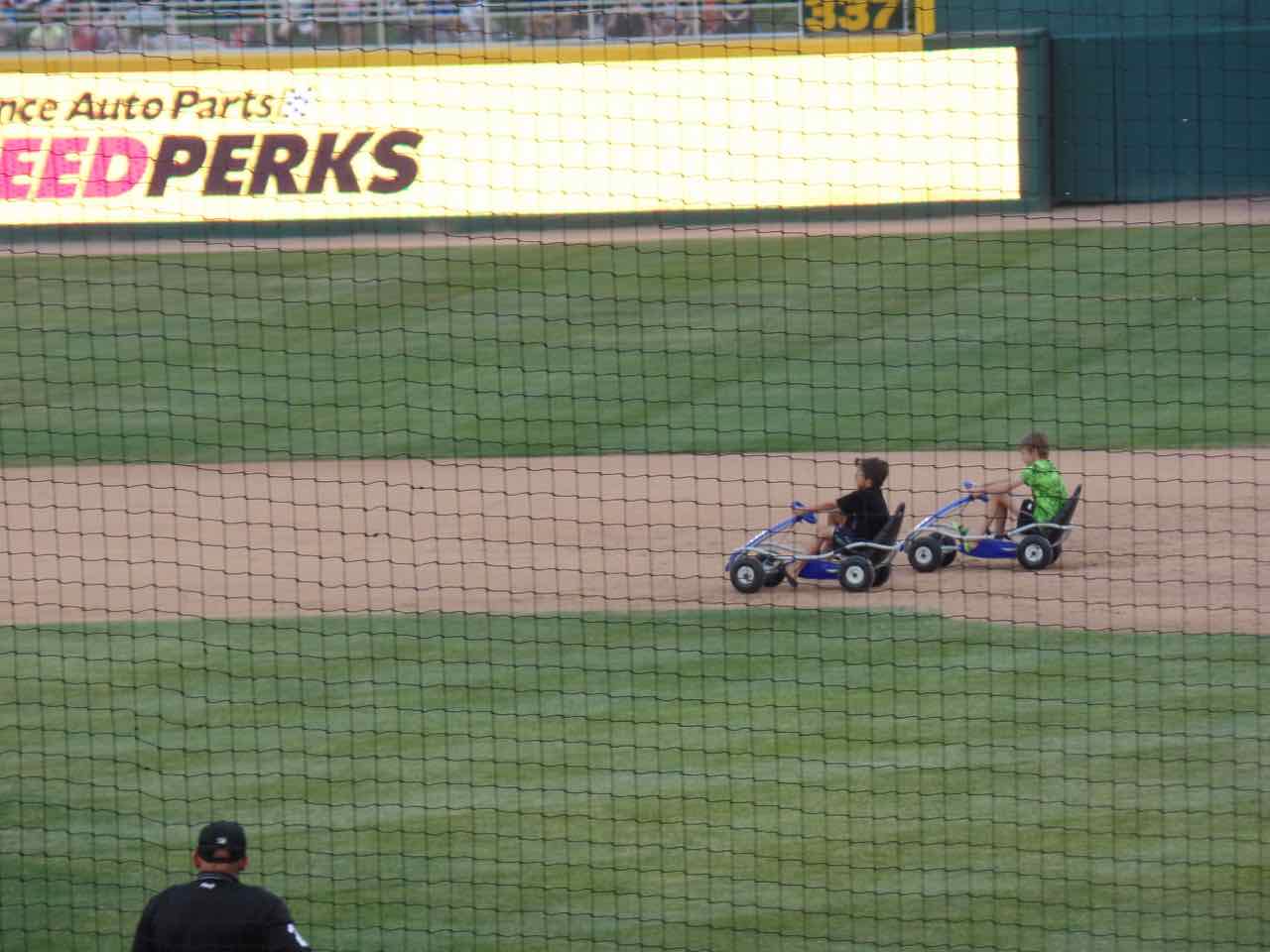 Between-innings nonsense, the way minor league baseball does. This time it was just two kids racing their cars from first base to third. The kid in the green shirt didn't seem to know how to pedal successfully, so the race wasn't close by the time they reached second. 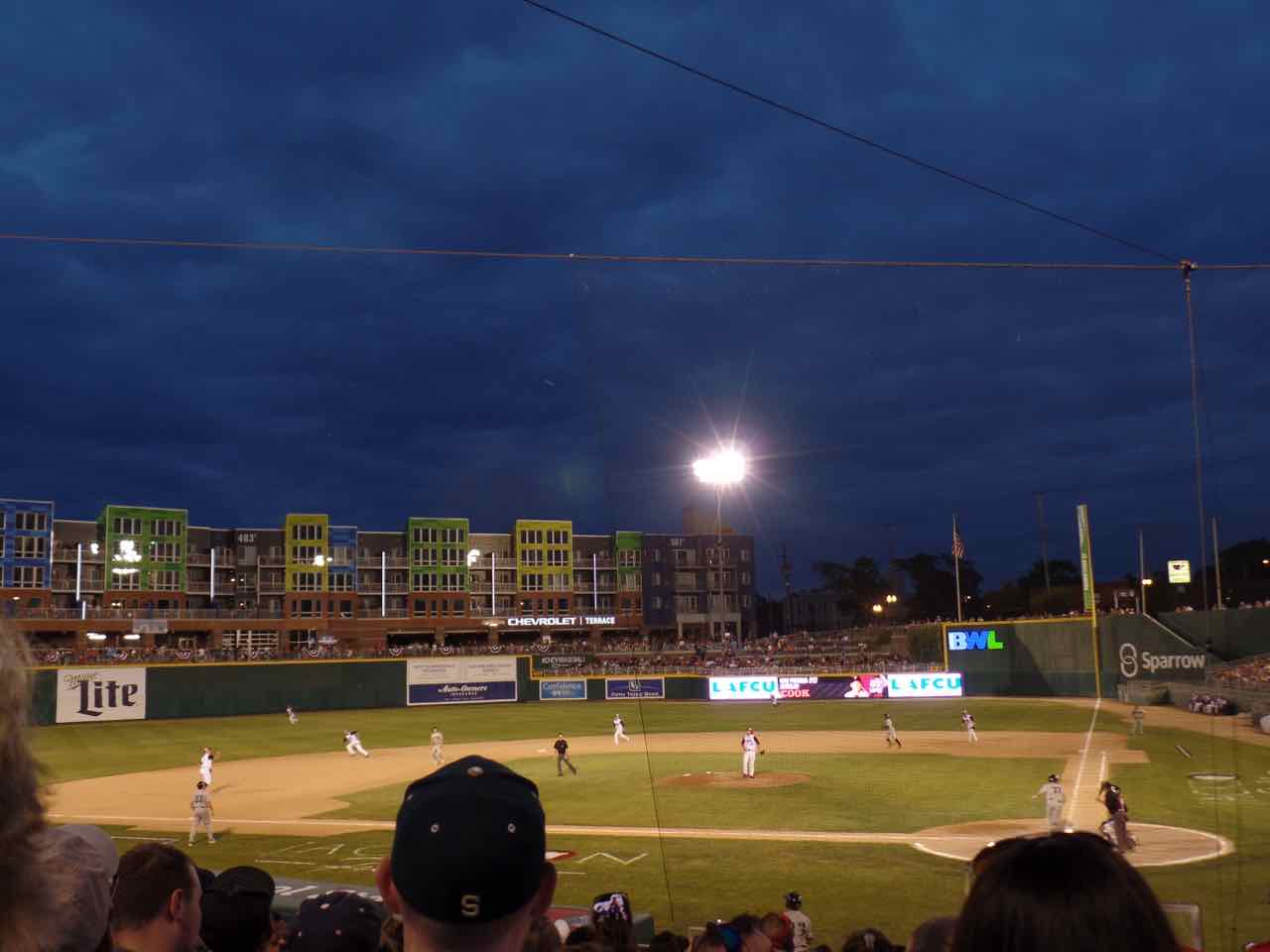 The game was supposed to go on past sunset, which in Michigan in July can take til about 2 am, so the ballpark could shoot off its fireworks and then the city theirs. The plan would go wrong when the Lugnuts had an eighth inning that just would not end. Note the Lego-block apartments built ringing the outfield; they're part of the stadium complex. 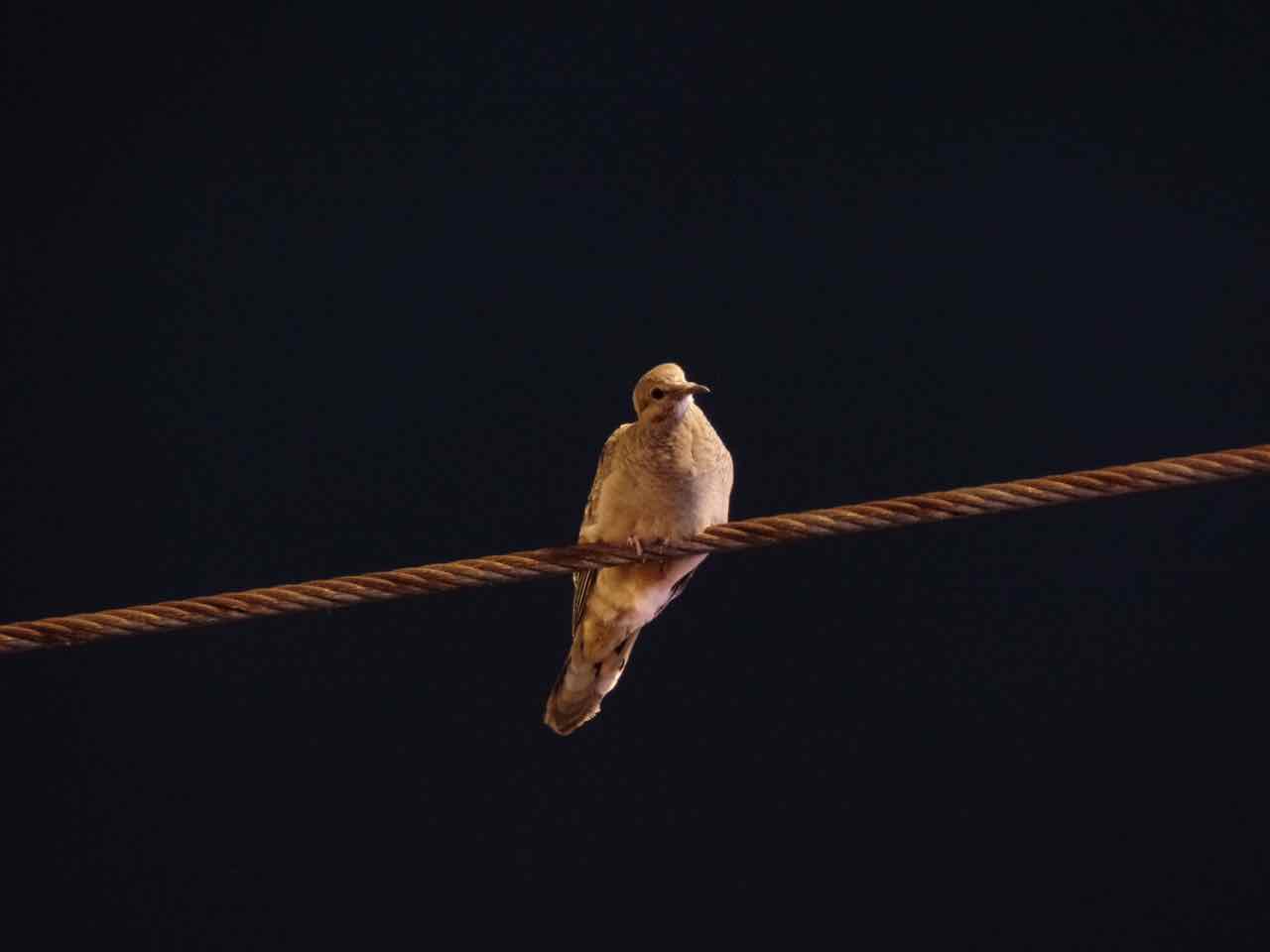 And then this bird perched on one of the ropes holding the netting behind home plate and would not move. The bird did finally turn around so I could photograph its more interesting side. Stayed through to the fireworks at least.

Trivia: Stretches at some point during a baseball game came to be common in the 1860s. They seem to have stabilized at the seventh inning when the Cincinnati Red Stockings of 1869 toured California and added a ten-minute interval after the sixth inning to let people get to the bar. By 1875 the seventh inning was seen as a lucky one for Cincinnati and a good time for the break. Source: A Game Of Inches: The Story Behind The Innovations That Shaped Baseball, Peter Morris.