After our pet rabbit died we knew that someday we'd get another. When we were done grieving, when we were feeling up to it. When we saw the right one.

bunny_hugger started looking at local rabbit shelters. They might have a nice large rabbit, maybe another Flemish Giant. Maybe something similarly large. She found one. A little larger than our lost pet. More metallic. Older than our pet was when

bunny_hugger first got him. The shelter wasn't sure, but, somewhere between four and six years old. Four was still a bit young. Six was as old as our pet was when I moved in. Large breeds, legendarily, don't live as long; could we get a rabbit that was already maybe in the latter half of his life? But then who else would adopt a rabbit in the maybe latter half of his life, one who'd already been in a shelter for a year-plus?

Without needing to ask me

bunny_hugger filled out the application and we set up a get-to-know-you date. The shelter would bring that rabbit and some others --- in case another would be a better fit for us --- to our house. They would save us the rather long drive out to Detroit and incidentally scope us out to see if we could be trusted to care for a rabbit. They e-mailed

bunny_hugger the delightful message that ``we shall come bearing bunnies''.

We spent the days ahead of Saturday cleaning the house. Getting in order our pet rabbit's hutch, getting that cleaned. Bringing back out of the basement the things we had put down there because we had no rabbit that could need them.

Too soon to look at another rabbit? A good question. It's been barely more than three weeks. But then sometimes ... you never know, about grief.

bunny_hugger and I became serious when she was still in the fresh shock of her divorce, and I was only a few months farther along my own grief. But that was an unquestionably right choice.

They brought a quartet of rabbits, the greatest number of rabbits ever assembled in our house so far as we know. One, Louise I believe, was an English checkered with they suspected a bit of something else. Very lively, after a few minutes looking suspiciously out of the opened carrier. Hopped out, found something, hopped back to the carrier, back out again, and so on. Her ``sister'' --- rescued about the same time from the same spot but probably not literally a sister --- Thelma was a big white rabbit with pink eyes. Quiet, very still, but comfortable nestling up to

bunny_hugger and to a lesser extent me.

Then there was Moxie, surely a good-omened name. An agouti New Zealand, large. A large one, looking enough like our dead rabbit as to be unnerving. The moreso when he overcame his uncertainty about the area and started thundering his way around the living room. We suspect he's got some Flemish. And then the last, the one which had caught 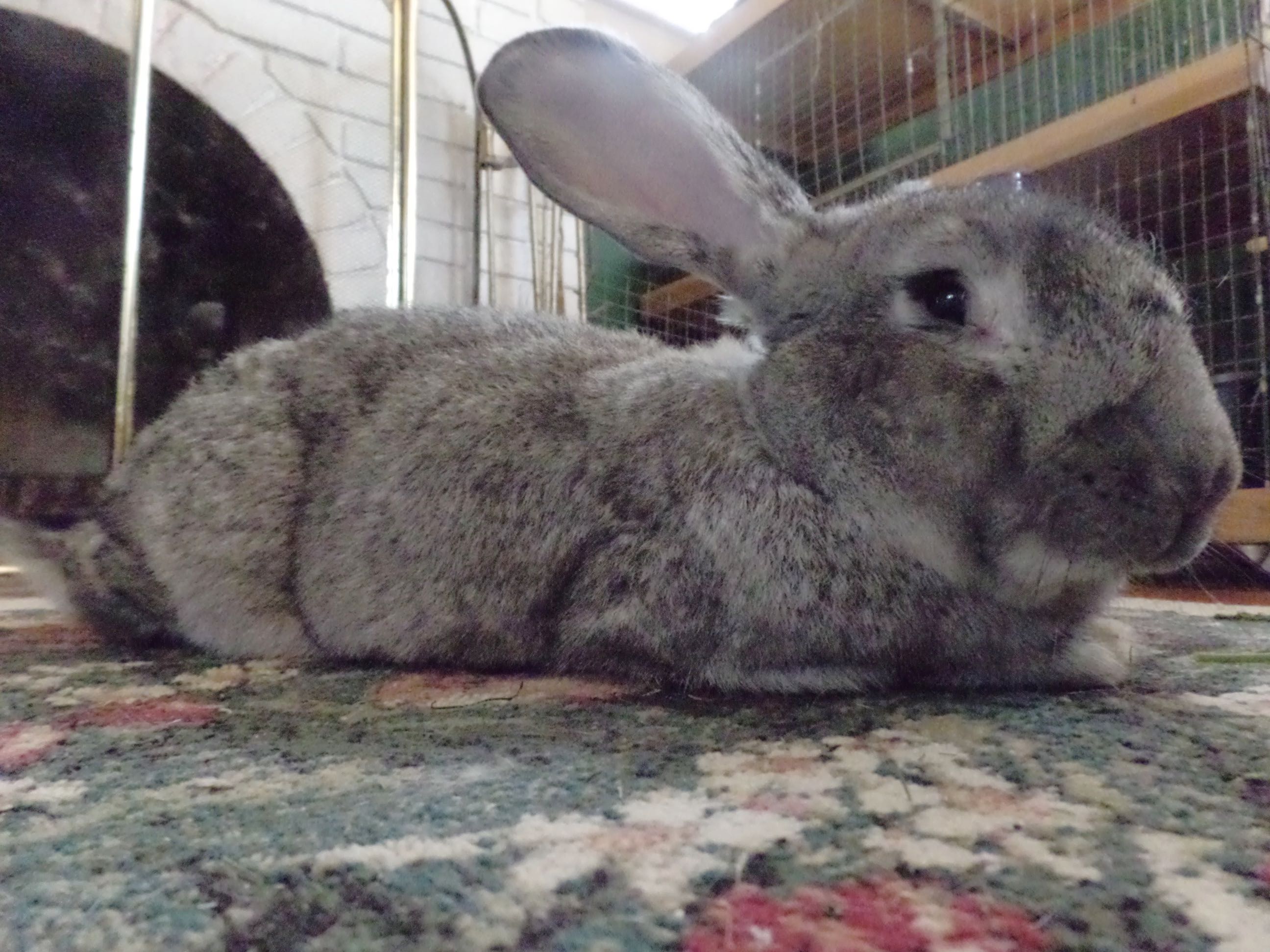 They didn't take him home.

They've checked with the original surrenderer and are more sure now that he's four. He's a little heavier than our lost rabbit, but the resemblance is less unsettling than Moxie's was. We did ask if he got along with the other rabbits, as we might adopt a partner. They said he got along with others, but weren't bonded. He poked his head into Thelma's carrier, a tactical mistake; she, probably feeling threatened, smacked him and he hopped out of range. She probably felt menaced and unable to retreat.

He did pee on the floor, just as the rabbit rescuers were done telling us about his good litter habits. He'd been in the carrier a long while and maybe didn't know where to find the bin. We aren't worried about this yet.

They set us up with litter and the food he's been used to --- it's not a good idea to switch rabbit foods too suddenly --- and warned us he was picky about hay, as he chomped down the hay we had. Maybe he was nervous. They also showed us a trick we hadn't thought of, that of putting some of the rectangular-grid plastic light diffusers that you put under fluorescent bulbs. It lets them use the litter without sitting in it. Thus do we learn pro tips.

Trivia: Advisors to (Avignon) Pope Clement VI in 1345 advised the lunar calendar used for Easter calculations could be rectified by dropping four days from 1349, which would conveniently be the next year after a leap yar and the start of a new 19-year Metonic cycle. Source: The Calendar: The 5000-Year Struggle To Align The Clock And The Heavens - And What Happened To The Missing Ten Days, David Ewing Duncan.