Before our next trip, we had the time for one of our traditions. That's getting to the county fair. Not our county fair. As is also traditional, the Ingham County fair was sometime we couldn't go because most of it overlapped with, I think, Pinburgh. We went instead to the Calhoun County Fair. It's the county that

bunny_hugger's parents live in. Her mother didn't go. Her back has been less a source of constant agony, but that doesn't mean it's actually good yet. Her father did go. He didn't last year, from concern for his wife. But this year was better.

We got delayed getting there, since the bridge over a small river the most direct route there was removed, pending replacement. So that's exciting. We weren't in danger of driving into the river. Did get a surprisingly good parking spot, considering our run of luck and especially the hour-long wait to get in that

bunny_hugger and I had last year.

First order of business once inside: french fries. Next order of business: considering whether to get the fried Oreos or what. We decided against, but figured to get elephant ears on the way out. The three of us went through the barns and the livestock exhibits, since that's so much of what there is to marvel at at the fair. Also

bunny_hugger's father quite likes taking the chance to pet cows and pigs. I just keep feeling like doing anything to get a pig's attention is probably a mistake. Anyway a lot of lovely-looking animals. Also in one of the goat enclosures a couple young people taking kids around on a practice(?) obstacle course, trying to get young goats to do stuff like walk up and then down a teeter-totter. The goats weren't having it.

Also I see from my pictures: what I have to guess was some kind of fancy part-translucent umbrella that looked like someone just abandoned a small flying saucer by the goat barn.

There were ducks in the pond again, and turkeys, so that's a couple years in a row now there's no particular bird diseases going around. The turkeys were pretty cool and none of them attacked my camera this time, although they didn't look happy about me being around. I don't take it personally. The small mammals barn had not a single guinea pig or hamster or gerbil in it. It did have a bunch of rabbits, including Californians that reminded us how hurt it was to have lost Penelope so soon. No really large rabbits. And then one of the women supervising the barn came over to ask me not to take flash photographs because it can startle the rabbits. Which ... all right, but I wasn't taking flash photographs. My camera's flash pops out on a little extension, like cameras did in the old days, and I showed her that as proof of my good behavior. She told me that she saw light coming from my camera. So I put my camera away rather than continue an unproductive debate.

In the 4-H hall the enormous array of photographs submitted, and winning ribbons for things, reinforced

bunny_hugger's belief that she should submit some of her own photos for a county fair. She should, absolutely. She has a lot of great pictures, and there are like eight hundred thousand categories so there's surely some that she can totally dominate.

Outside we saw a guy doing license plate art. That is, spraying paint onto a plate that's the right size to put on your front plate holder (Michigan has only rear plates). And, what's really striking, drying or producing some kinds of paint effects by spraying the thing with fire. He was doing these cosmic, loosely prog-rock-album plates, to the applause of a modest but interested crowd.

They had the same rides at the fair again. The really fast carousel that we see in Fremont each year. The Ferris wheel and drop tower that, this year, we skipped. We didn't want to spend too much time riding things, considering

bunny_hugger's father was just sitting waiting for us to be done, and her mother sitting at home waiting for us to be done. We just picked a couple of them --- a Wipeout, the trabant, the carousel --- and bought tickets for them. Did admire more of the art, though. The tiny haunted house, for example, had some fun art and a couple of animated figures outside that were worth photographing. Maybe we could've spent more time at the fair. But, you know? We had a good time and we got back early enough to try this Mice and Mystics chapter that had been licking us. It licked us again. That's doing pretty well still.

Trivia: Four of the six ``First Day's Vases'' cast by Josiah Wedgewood on the 13th June 1769 opening of his new works at Etruria still survive. Source: The Lunar Men: The Friends who Made the Future, Jenny Uglow. 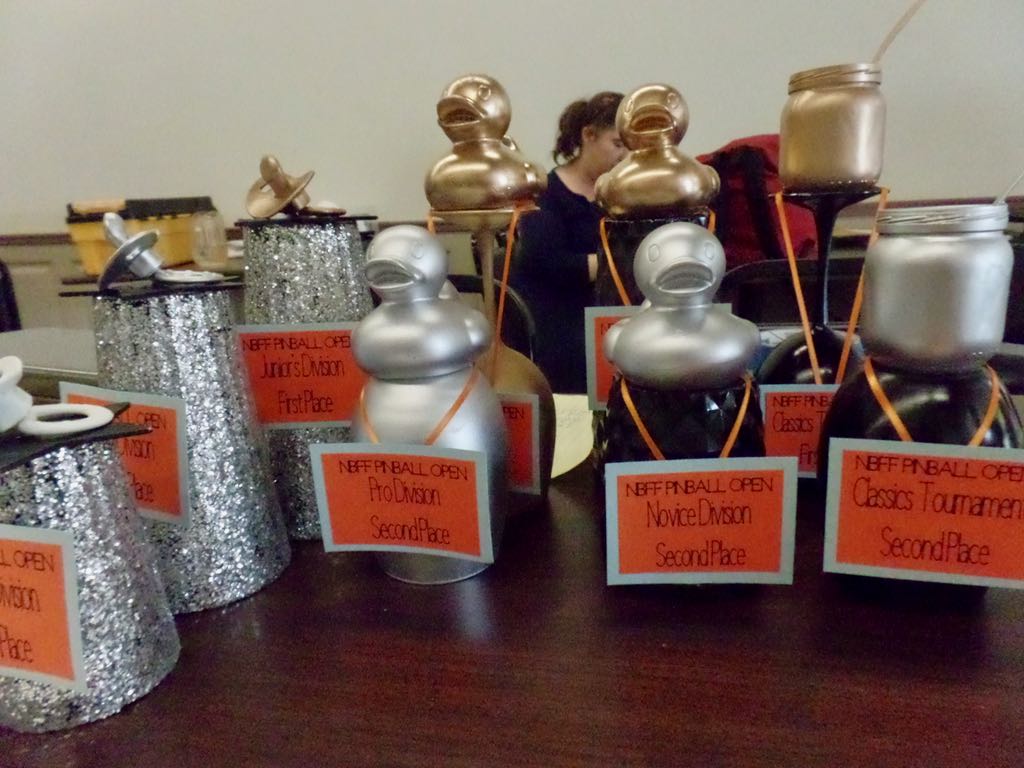 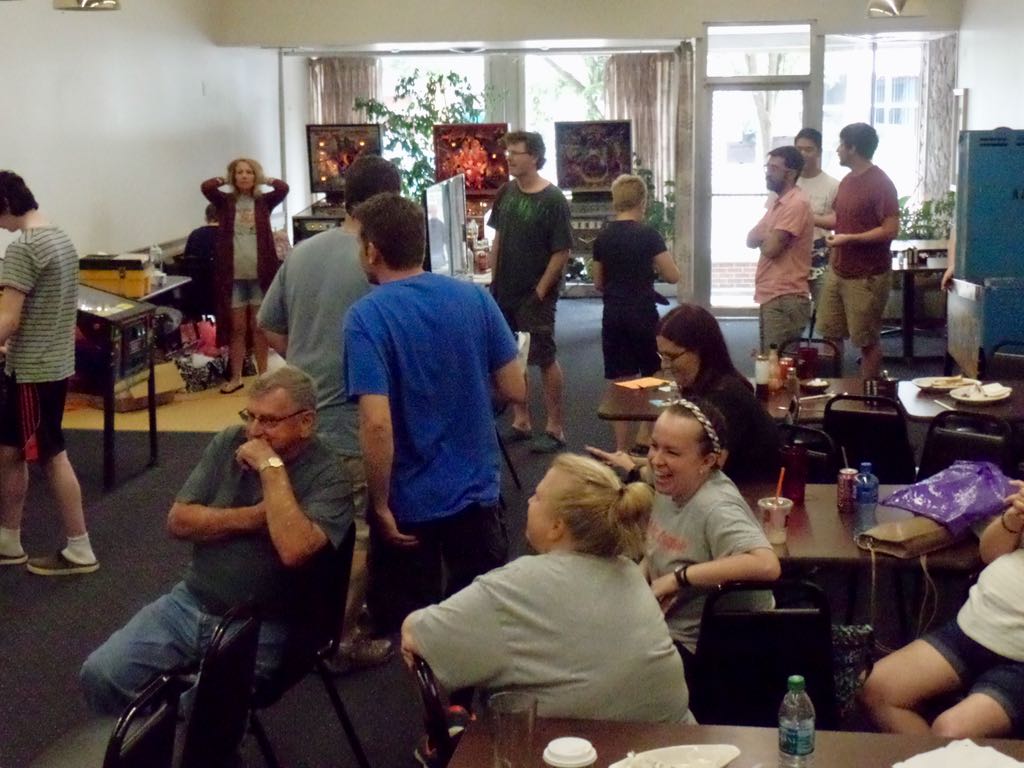 I think every emotion of tournament pinball is on display somewhere in this picture. 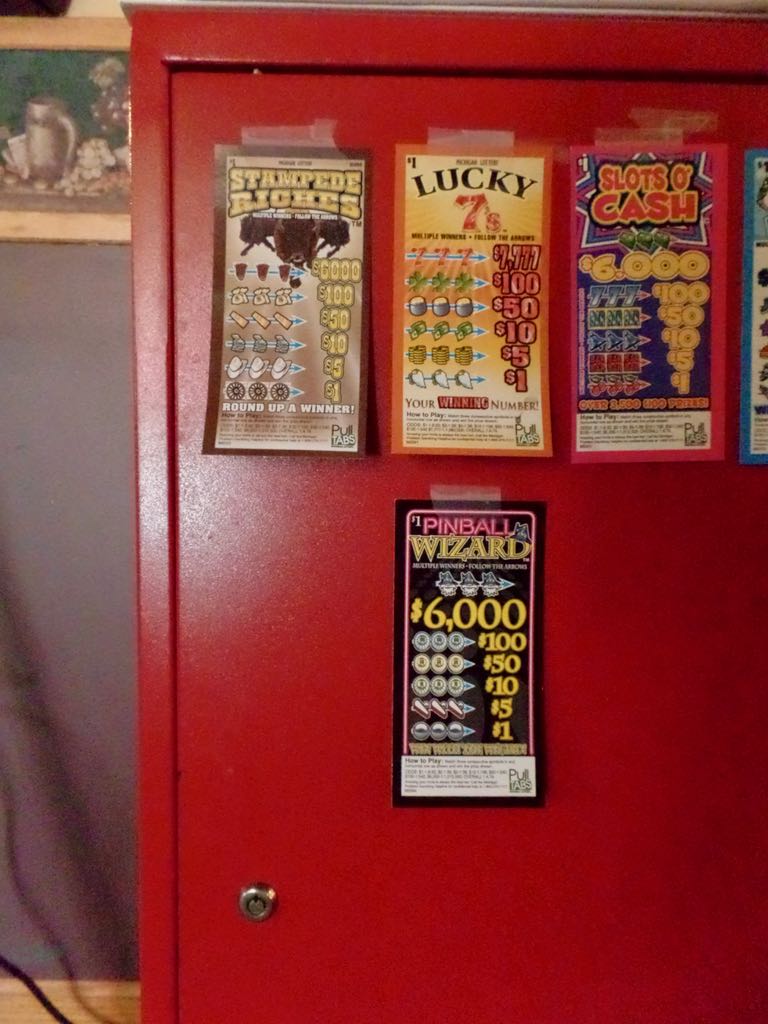 Scratch-off lottery tickets I noticed in the main room of the restaurant. I didn't see any examples of the Pinball Wizard card in their machine, though, and haven't seen it since.