So somehow we missed the group leaving for the mine. Rather than storm off in a rage we talked with one of the people watching over the museum. They made a call to the gift shop, I infer to make sure they don't sell too many tickets for the next mine tour, and suggest we join the group that's currently walking around the machine room. This is an enormous space, maybe a hundred feet tall. It's dominated by this spindle. It's hourglass-shaped, and looks like something a knitter might have their yarn wound around, except that it is gigantic. Easily fifty feet in diameter; we missed the statement of just how big it was. This holds the cable that hoisted boxes of ore or people from the mine. It had to be able to reach down the nine-thousand-plus feet of the shaft, and to wind fully up when nothing was down below. The docent said the actual cable --- a sample of which was outside --- was made by ``the same people who made the cable for the Brooklyn Bridge''. This gives me a double local thrill; I know who that is. Charles Roebling and Washington Robeling went to Rensselaer Polytechnic Institute. The Robeling wire-rope makers were established in the Chambersburg area of Trenton. That's where my home office is. I give the crowd a thrill: I don't go telling everyone about this.

There is a cable of some kind on the spool. I forget the rule to having a delightful time at a museum: ask the dumb questions. If it's not working cable, then, where is it from? Who made it, and why? ... I don't know, and won't, at least until we make a return trip. (Yes, ``to have something for this spool'' suffices for why, but then that moves the question to ``why did they need something on the spool?'' instead.)

There are other bits to the room that are thrilling, if you're into the ways people can make big complicated dangerous projects like this. Generations of signalling devices, along with the workarounds used to communicate information essential to avoiding injury or death in an environment where many people don't speak English, or much of a common language, and there's such a racket they might not hear anything anyway. The tools needed to keep the hoisting rope and machinery working. The cartoonishly oversized tools needed for a project this big. I've never been to, like, somewhere they launch rockets. But the enormous scale of the central pieces, and the way everything about it is this weird mix of dangerous and carefully engineered things alongside, like, a wrench with a mouth that's two feet wide gives me some better feeling of what it has to be like.

Finally, our turn for the mine. They had a small train car to go down the hill. Not into the mine directly, although given how it disappeared over the steep drop of the hill you can be forgiven for thinking it did. (And I thought it might, when I heard descriptions of it.) It goes instead downhill a good seventy feet or so, to a landing where they do a person count and load everyone into a two-car electric bus.

At this level there's an adit This is a horizontal access tube into a mine. Really good if the mine goes into a hillside. When this was a working mine the adit was as small as could be and still allow access, so, something like five feet tall and three feet wide and wear your helmet and duck. In the 70s Michigan Tech had its mining majors dig out the adit to its present width, something like ten feet across and tall, wide enough for an electric bus to putter into the main area. They also dug out a classroom, which you can get a very quick glimpse of while the bus shuttles along. It's got your classic 70s Engineering School look, heavy wood desks and flippable blackboard on rollers. But we didn't stop there, more's the pity.

Again I forgot the rule about museums, and never asked the dumb questions. Like, how long did it take the engineering students to dig this out? Was the digging reserved for undergraduates or was it for grad students? What did they do with the extracted (worthless) rock? How did the Michigan Tech trustees come to decide the school should be quite this practical in its practical work? ... I don't know.

Our tour guide gave us the vibe he had been the Most Popular Lecturer, four years running, for the campus newspaper's student-opinion-survey. He just had that tone of tenured-confidence and willingness to involve the students. And he lead us through dark, wet chambers of rock. Some chambers were amazing, like the one that, a hundred fifty years earlier, was the vein of copper. It's now a vast, ellipsoidal hollow, the long end tilted about forty degrees off vertical. This is close to the ground, and so was some of the first copper dug out. He pointed his flashlight to where you could see the scratches made by hand tools.

Then a tour of generations of mining equipment, from what would be done by hand and by candlelight that you hoped didn't go out. He did turn the lights off momentarily that we could see and hear the darkness of a copper mine. Early mechanical drills that teams of four could do. Then teams of two. Then solo persons. Mention of the ``labor unrest'' caused when the mine owners decided they didn't need so much labor. The docent never quite came out and called the mine owners rat-bastards, but it wasn't hard to get there from what he did. It seemed startlingly close to partisan, but then, if you are going to speak truthfully about 19th and 20th century capital: yeah, no, any mine owner was a god-awful person.

One of the people taking the tours asked the docent, ``is it true Calumet'' and the docent said ``No'' right then. Calumet is one of the many towns along the Keweenaw Peninsula and it's one we would come back to. It's got a tie to a common phrase you have heard of. But this exchange was baffling to us. The person tried again, and the docent shut him down again. Eventually the person asked enough of his question that we could understand. He wanted to hear about the rumor that Calumet was going to be the capital of Michigan. Or that they at least thought seriously about moving the capital to it.

There's a molecule of sense in thinking the capital of Michigan might have been in a tiny town on a remote peninsula on the unpopulated, remote upper peninsula. Michigan's statehood constitution, in 1837, required that the state settle in ten years on a new capital that was Not Detroit. Part of this was the usual 19th century attitude that state capitals not be the big city where legislators would be tempted by money. But here there was actually living history. Michigan had been invaded and Detroit surrendered to a foreign power not 25 years earlier. The capital had to be somewhere with what strategic depth the land could offer. A bunch of the cities of 1837 competed for the title. Lansing, a town that can be charitably said to have ``technically existed'', won as the compromise candidate as all the ``actually existing'' cities cancelled one another out.

Still. All the plausible candidate capitals were in the lower peninsula where there was any population. And the lower part of the lower peninsula, at that. Under no circumstances, as the docent pointed out, would the capital be put in the most impossibly remote part of the state, especially when --- before the Mackinac Bridge --- the upper peninsula was accessible only by sledge or by going through Wisconsin all through the long winter. Calumet might be a big city, in the late 19th century, by upper peninsula standards. But it just wasn't anyplace to go to. Especially in 1847, before industrial copper-mining had got going.

But what a delightful wild rumor to encounter! If the mine tour wasn't fascinating enough, that made it all the better.

On the way back the docent pointed out the chill of the mine level we were at. I'd estimate it at something in the mid-50s. The lower you go, the warmer the temperature. Miners in the deepest parts of the shaft would feel temperatures in the 90s, year-round. Even in the midst of the upper peninsula winters, when it might be twenty below above ground. They'd take the mine elevator from these 90s, into the -20s while still dressed for the eight-to-twelve hours of intense heat and humidity, then huddle to the locker rooms where it might be a normal room temperature, say 60, and then go through the weather to get back home, and go through these wild flutterings of temperature at least twice a day. How many people did that sicken? How many people died from that? Should those people be added to the roster of people killed in the mines? He didn't offer his verdict, but asking the question suggests an answer.

The working day of the park was coming to an end. We walked around the buildings some more, and then into the gift shop where we kept finding interesting stuff. I bought a book, of course.

bunny_hugger bought a little scrap of copper ore that she simply found beautiful. They had blocks of pure copper, in cubes and in bricks like cartoon gold bars. These offered curious implications: a one-pound block of pure copper for $10? All right, but a one-kilogram block for $20? This suggests chances for gift-shop arbitrage that we were unable to pursue.

We did have a nice little chat with the gift shop clerk, who talked about growing up in the area and the days when the mine wasn't part of any organized historical tour. It was just there, a lure for bored kids to peer into the shaft and hope they didn't fall in. My toes curled up, feeling the horror of plummeting, just at the description of this. I know that we as a society used to be more casual about danger. I'm not one to whine about requiring helmets for bicyclists, although I do chafe at parents having to supervise their kids until they get on the school bus. Still, I'd have thought ``open pit that falls off, about 40 degrees off vertical, for over a mile'' would be one of those things well-fenced-off, even the 1970s.

But, you know, foreign countries and all that.

Trivia: England's production of calico rose from about 56,000 yards in 1775 to three million yards in 1883. Source: Big Cotton: How a Humble Fiber Created Fortunes, Wrecked Civilizations, and Put America on the Map, Stephen Yafa.

PS: My 2018 Mathematics A To Z: Distribution (probability), continuing on a heck of a busy week.

PPS: Let's get back to The Beast at Kings Island. 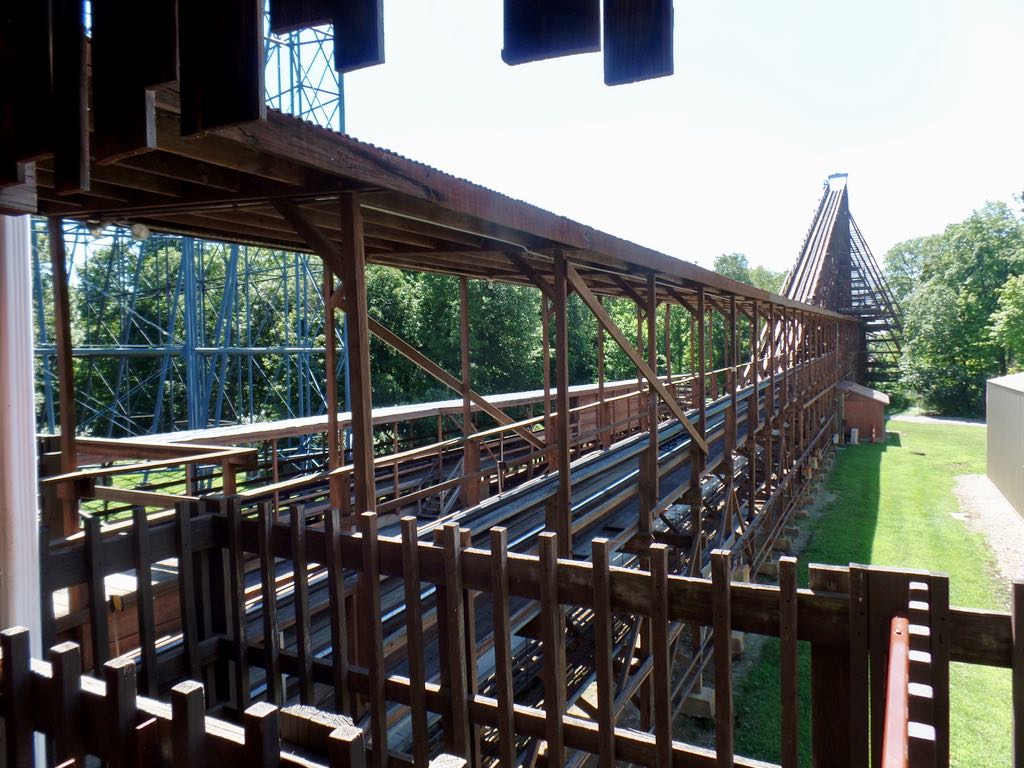 The Beast's lift hill, as seen from before you ride. 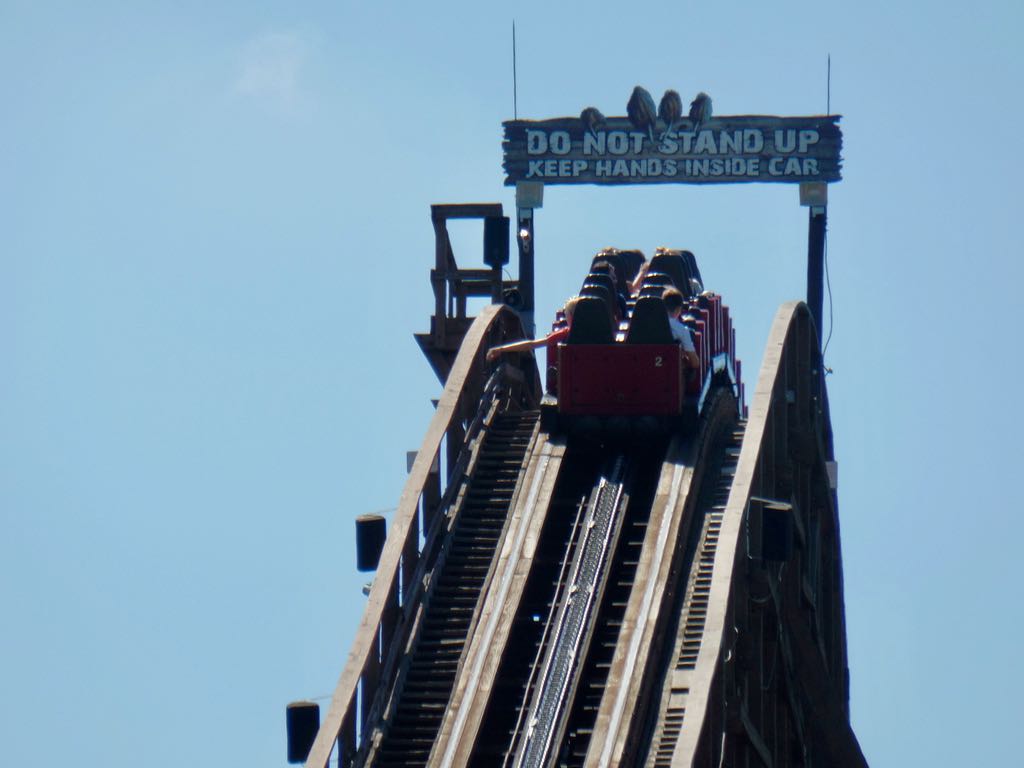 And people disappearing over the hill. I love the Do Not Stand Up sign above the hill, which seems like an old-fashioned affectation to me. I see the person reaching their hand out to touch the fencepost there too, yeah; it seems like it's a local tradition for people to do that on the ascent, if my photos of ascending trains with people reaching out are a reliable guide. 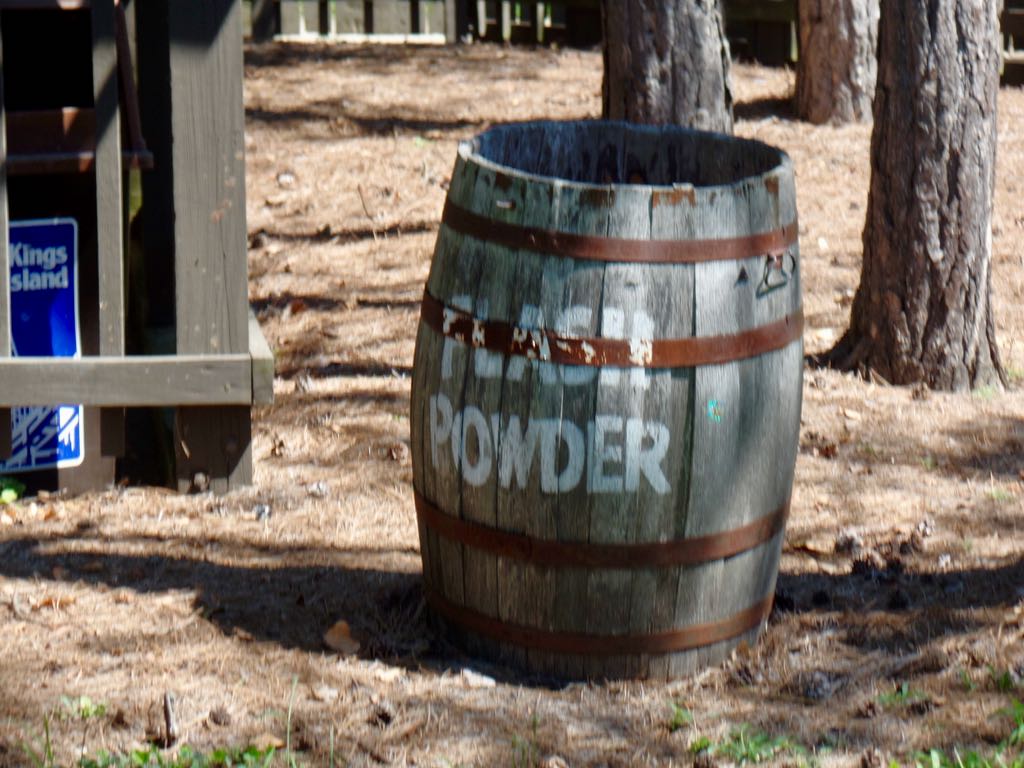 Prop adjacent to The Beast and I guess, oh yeah, it's in a western-themed area? That'll do.