Monday morning we faced the question: would we finally meet our AirBnB hosts today, after five days living in their basement, just as we were leaving? And the answer: no. They left to whatever their lives were. We did our best to leave the place reasonably tidy and orderly and hoped we left a good impression.

I forget what we did for lunch. We were leaving about 11 am, a little early for us to eat, but it would seem odd to just trust we could find something to have in the vast areas between towns in the upper peninsula. Maybe

bunny_hugger will remind me. Maybe we did just get something from the convenience store and nibble on the road.

bunny_hugger had found a string of letterboxes along our path home. One of them was barely outside of Hancock/Houghton. It was at a boat launch just opposite the canal from the White City Park we'd closed the day at on Sunday, and we could see the lighthouse and the spots we'd walked along, looking for signs of a lost amusement park, fourteen hours before. They're close spots geographically; by roads, they're at least a half-hour, maybe more, apart. There were a couple people around another boat on our side of the canal. They didn't find us interesting. We didn't find the letterbox at all, although we were fairly sure we were near the right spot. It was a failure, but that's all right. We had many more boxes along the way on our path home.

Maybe an hour farther east-and-south-ish on US 41 we stopped at the Canyon Falls and Gorge rest area. It's a tiny rest stop on the highway, one that doesn't have running water for the bathrooms. It has got running water for the river beside it, and a long series of beautiful spots. There's a letterbox along the nature trail there, and the clues only start from the waterfall farthest along the trail. That's a common use of letterboxing, to draw attention to something people might overlook. Because of the clue we had a good half-hour hike down, and back again, watching the trees and the bushes and the water, and packs of other people walking and dogs excited that they were somewhere strange, and flat rocks that sprawl out into the river, and what look like WPA-era stacks of rocks pointing out the trails, and the rusting remains of waterwheels, and trees with identifying signs on them. We found the letterbox, too. And it was an old one, originally placed in July of 2003 and replaced in August of 2006. No idea how close we were to the exact anniversary of its planting. But

bunny_hugger had come to this spot in her August 2006 trip, and not found the letterbox. Possibly she was a few days early for its replanting.

Back to the road! We were taking the drive home relatively slowly, yes, since who wants things like this to end even if we were going to pinball league the next day? But also we figured to catch up on everything we had skipped on driving up, since we had a deadline to get to our AirBnB hosts and no deadline to get home. Still, it was already 2:30, so we got back on US 41 and didn't stop for maybe a half-hour again. This time, because

bunny_hugger knew a place that sold pasties, including vegetarian pasties, and we hadn't gotten any while we were up north. We had a cooler just for them, and got a good half-dozen.

Our next stop was maybe a half-hour after that, in Munising. This was a letterbox stop. This one right by the highway, although not in a way you could get to easily from the highway. It was one of those where you have to make seven turns, all of them away from the obvious direction, to get there. The building is that of a law firm, and the letterbox was planted by (we guess?) someone who work(ed?) there. It looks like a tiny castle, all clad in bricks and with parapets and everything. It used to be the private home of a local brewer. The brewery, long since gone, was connected by tunnel to the house so that, the story goes, he could check on the works without violating local laws about entering breweries in the evening hours or Sundays. The castle as it remains looks great, and it's decorated with a bunch of classic-style statues and dragon sculptures and all that. We had no trouble finding the letterbox. If the employees wondered why a couple strangers were sitting on the bench crowded around a plastic sandwich box in the back lot, nobody came out to challenge us. They maybe understand how occasionally they'll get letterboxers is all.

Back on the road! And despite the Munising rush hour we would not stop again for ... well, 45 minutes. Another letterbox stop. This one's going to take some explaining.

Trivia: Five companies responded to the Works Progress Administration's 1936 contract proposal for thirty newsreel issues about ``the citizens of a particular state, or area'' and WPA operations in that area. Source: The American Newsreel, 1911 - 1967, Raymond Fielding.

PPS: The carousel at Kings Island, on what was then National Carousel Day. 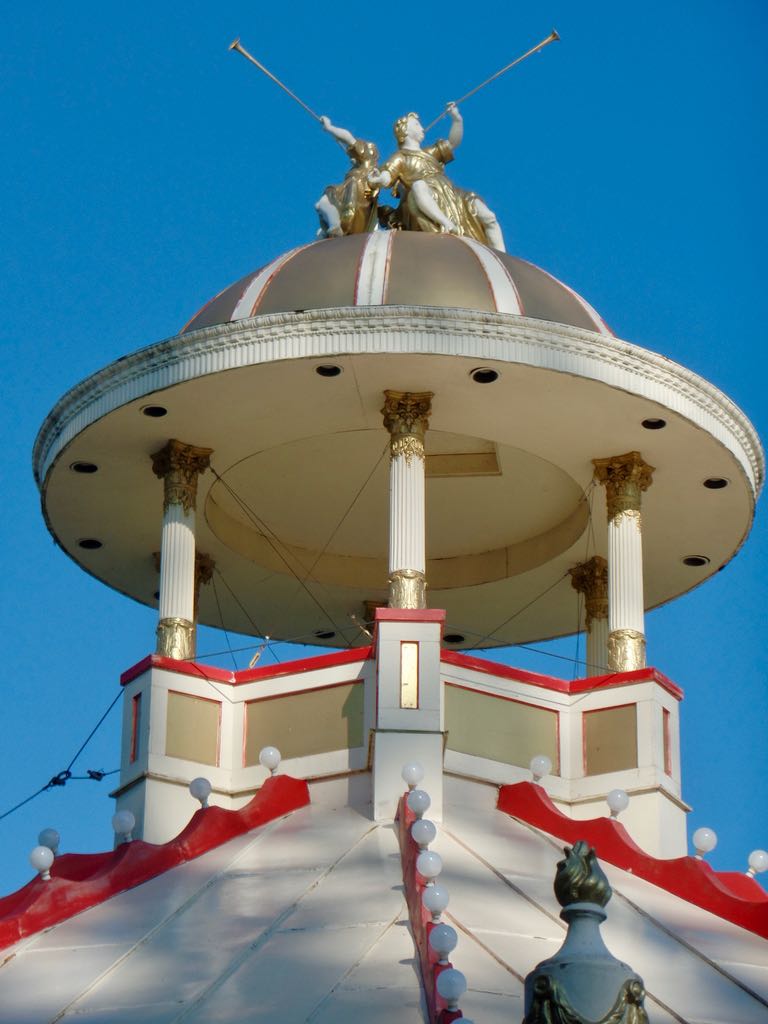 Angels(?) blowing their trumpets atop the cupola of the Kings Island carousel house. 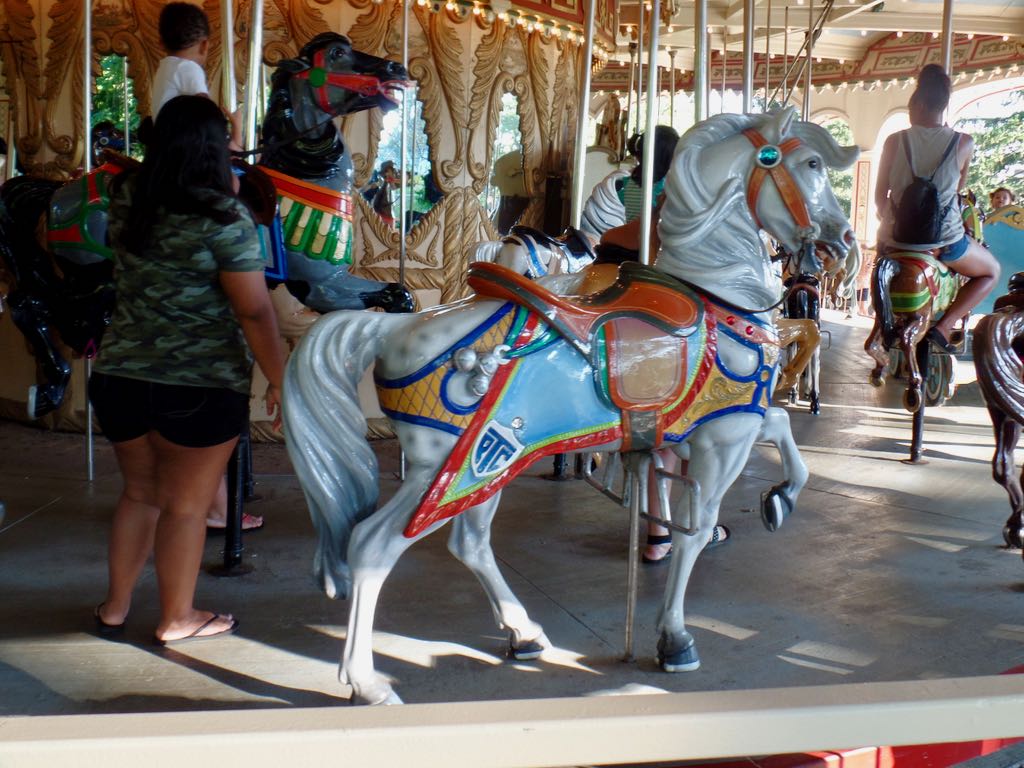 One PTC Shield horse on the Kings Island carousel. There are several. Shield horses were supposed to be used as a convenient way for ticket-takers to work out where to start (and stop) their round of collections, but PTC built way more shield horses than they did carousels and near the end of the carousel-making days they started loading up multiple ones on a ride. 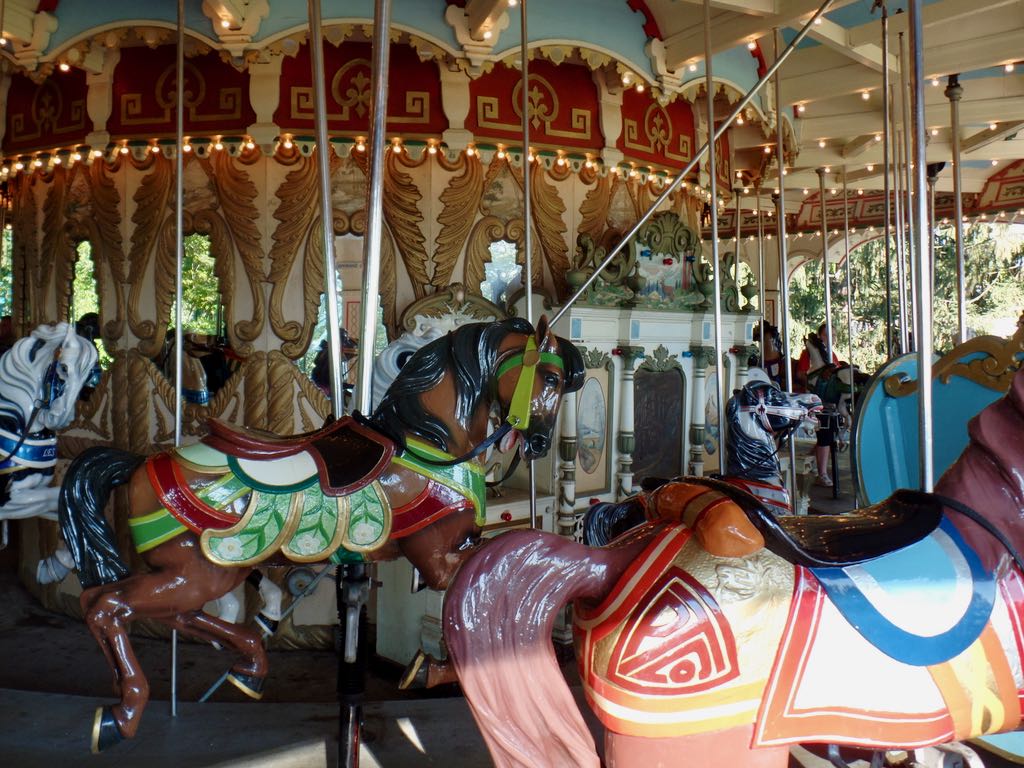 Another PTC shield, this one on the rump of a horse. Also a view of the newly-working band organ in the middle of the ride.