We were back home under a week when the news about my aunt's death came, and I had that hurried job of packing and preparing and ticket-buying and heading out to Rhode Island by way of Baltimore. That's been recounted already. So let me risk mental whiplash by going back to amusement parks.

One thing that we resolve every year is that we're going to get to Michigan's Adventure and to Cedar Point more. Trouble is we figure the best time for it is June, and we're often caught up in doing things that were put off for the end of semester then. And then we're into the July events, which these days include a week spent at Pinburgh, and often a weeklong trip otherwise. Then it's suddenly August, when the parks are busiest, and we're cursing ourselves for not having got there sooner. This year we had the embarrassment that we were near the end of August and hadn't got to Michigan's Adventure at all. We've done worse; one year we got there only on closing day. But we were close to that already.

So that's how our first Michigan's Adventure trip was the last day of August this year. It was --- like it always seems to be --- a brilliant, sunny, cloudless day. Also a fairly busy one, so that we had to wait for actual lines for things besides the Mad Mouse. Mad Mouse always has a line for it, because it operates slow. But we made that our first ride for the day, since the line was shorter than we feared, reflecting that it apparently had just opened up again. The ride seems to have had a bad year; we saw it closed repeatedly on both our visits.

We also spent time at the petting zoo, because they've got bunnies. Also goats, who were proving very interesting. One smaller goat had set herself up on the entrance of the enclosure's bridge and was taking on all comers. This looked like good harmless play except we got the idea she decided she wanted off the bridge and the elder goat who'd been headbutting with her would not allow this. That's a pretty good petard-based moment. The rabbits all looked pretty well, especially since they now have a small table that they can use for shelter from the sun or people's hands.

There were two big attractions to Michigan's Adventure that week. One is that on Sunday they got about 84 inches of rain, and on Monday they got a chaser of 46 further inches. I exaggerate slightly. They had to close the park early for flooding, and I really want to know if people got rain checks. We were there about six days after the worst of the rain and the park was still flooded. Wolverine Wildcat sits on the edge of the central lake; this visit, the ride supports were in the water. If this doesn't set off years of rumors of the wooden roller coaster sinking, nothing will. There's been, in past years, a pumpkin patch grown near Shivering Timbers --- their big, mile-long wooden roller coaster --- and this time around all we saw there was the rectangular outline of the garden, made into water. It's possible the pumpkins were already harvested; I'm not sure how late in the season they were before. But all we could see was the one gourd barely poking above the waterline. Outside the Thunderhawk roller coaster --- adjacent to Wolverine Wildcat as the crow flies, although almost opposite ends of the park as public access has it --- they had pumps going, churning water out of the ground, raising the question of where they were pumping it to.

We did get a ride on the Chance carousel, and this time, possibly for the first time, I rode on the deer.

bunny_hugger pointed out the antlers were probably real antlers, and I was tapping them as the ride operator came around to say they were real antlers. (Real antlers are often used on carousels, because they've got an enviable blend of being lightweight yet strong enough to handle fumbling riders grabbing at them, and they are readily available.) I think that he started to tell us something confusing about the antlers replacing some earlier set, which seems improbable given the way the joint between antler and mount look, but I don't remember clearly what it was he did mean to explain. Still, it did cause us to look closely at the animals in a way we hadn't before, and notice things like the scenes painted on saddle blankets. Chance carousels are these modern fiberglass replicas of actual antiques, but that doesn't mean they're bad, just easier to make than wood ones.

But the other big attraction to Michigan's Adventure was that it was closing at 9 pm. This may seem unexceptional. But Michigan's Adventure doesn't have lights. It isn't normally open at night. But, near the end of the summer, there are a few days where the park is open past sunset, and you get to see the park transformed into the glories of an amusement park at night, with only the lights of the rides and the games and the food stands to light the way. We would get a twilight ride on Zach's Zoomer --- the kiddie wooden coaster --- and face the decision of what major ride to get a night ride on. We voted for Wolverine Wildcat. We've done night rides on Shivering Timbers --- which are great, and take you so far from other light sources as to be almost scary --- but not Wolverine Wildcat that we remembered. And that we were riding this in while the ride was sunken, or at least standing in the water, added to the fun. We didn't quite make the final run of the night on it, but we did get a front-seat ride, by night, with the majority of the park visible in the reflections on the water. That's pretty good.

We walked out the slow way, enjoying the beauty of the park cloaked in night.

Trivia: Detroit's first major league baseball team, in 1881, provided that ``every holder of a season ticket [ to Recreation Park ] will have an opportunity to draw for a choice of seats, and that seat will be reserved from them throughout the season.'' No other seats would be reserved, but would be open to anyone willing to pay their 15 cents admission. Source: A Game of Inches: The Story Behidn the Innovations that Shaped Baseball, Peter Morris.

Currently Reading: Death's Door: The Truth Behind the Italian Hall Disaster and the Strike of 1913, Steve Lehto. So the last 40 pages or so are, I guess, the Second Edition's contents, mostly Lehto looking at other books, historical plaques, monuments, and the like to explain how they're wrong. Some of this is good fun because who doesn't like to see, essentially, academics squabbling. Some of this is really detailed arguing about whether the actual death toll is 73 or some larger number. (Lehto argues the official toll is 73, and claims the serial numbers of death certificates for the county support that, and, fine. He offers that some parents might have taken dead children and buried them without reporting to the authorities, which sounds plausible to me. The attempt to attach a precise number to any mass casualty is doomed to start with, but when it gets into paragraphs of arguing over 73 persons or 74 persons ... I'm not sure this is an efficient use of page space.)

PS: A couple more bits of what we did for fun at Kings Island. 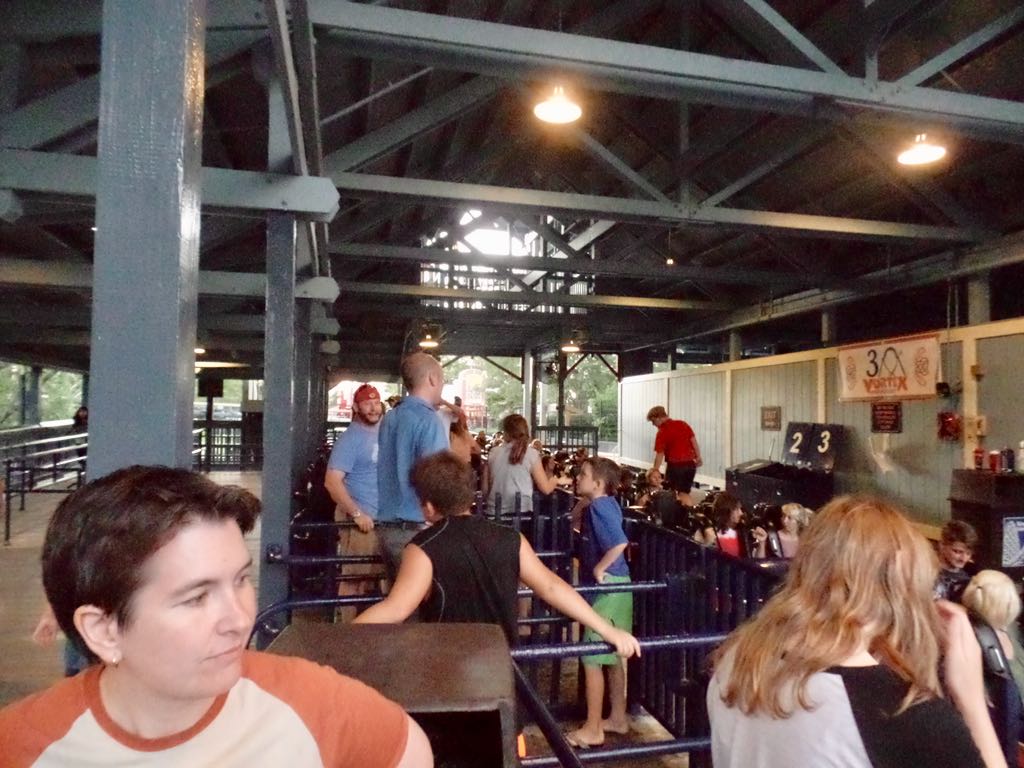 bunny_hugger looks skeptically on at whatever the Vortex's ride operators were doing. 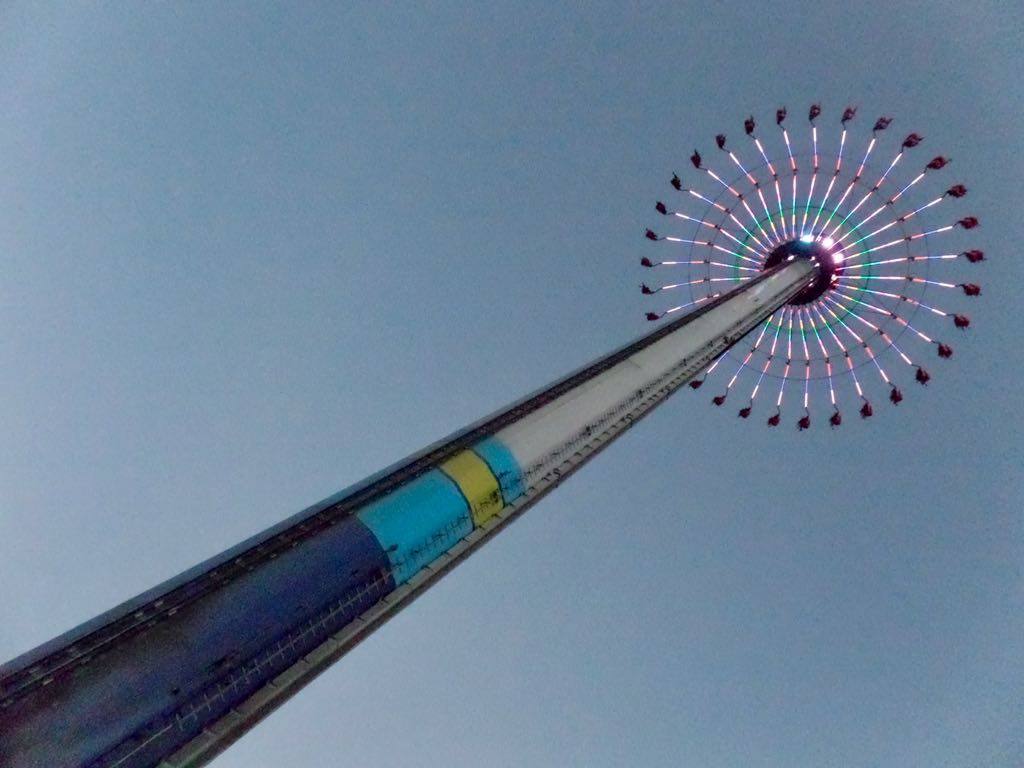 We did not ride the Kings Island Windseeker, although it did look quite good if you weren't worried about the height. It's been years since one of these got stuck up there, though. What are you worried about? 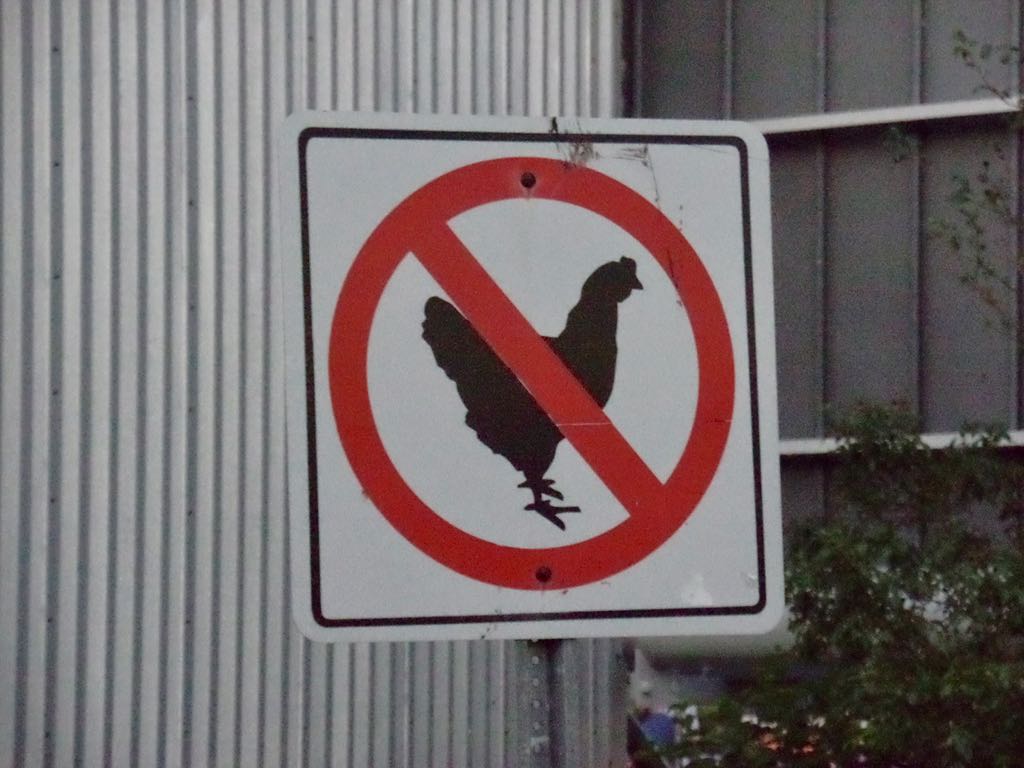 So there you are: no transmogrifying into a chicken on this ride.