So after two amusement park trips in short order what better way to pass a mid-September Saturday than going to an amusement park? Cedar Point, in this case. We figured we hadn't been there enough, and our only planned other visit was for Halloweekends at the end of October (watch this space). We had, we thought, a free day and so went out. This turned out to be ... mm. A good idea? Maybe. The trouble is, it was a rather nice, and warm-for-September, day, so the whole population of northwestern Ohio came to the park too. The crowds, good for the park, yes, but spoiling our chances to ride on things we hadn't got to yet this year such as the Raptor or Maverick roller coasters, and adding a certain chaos to just walking around.

Still it was a chance to see the park in its Halloweekends livery, and on a gorgeous day that let us really savor the decorations, including some more characters for their Old West-themed area. Since Steel Vengeance came in they've been building up a pretty big set of Old West characters and now these characters are even getting ``gravestones'' and markers in the regular parts of the park.

And we had a happy discovery! Years ago the park had an old bronze gryphon statue, set in front of the Iron Dragon roller coaster because they didn't have a better idea where to put it. As Cedar Point built the GateKeeper roller coaster, the gryphon statue disappeared. There was an obvious reason why: GateKeeper's logo is a gryphon, and the trains have golden gryphon heads on them, and so when the ride opened the gryphon statue ... was not there. And never appeared. Dark rumors swirled that the statue was seen painted gold, and then vanished, possibly broken, possibly sold. But this time in the Town Hall Museum, along with other memorabilia from the park's history, was the Iron Dragon gryphon statue. Painted gold, as rumors had it. It looked ready to put next to GateKeeper but was instead for some reason, here. Also in the museum was one of the antique bronze statues of Mercury, which had rested by the Marina Entrance until that was renovated to put in the ValRavn roller coaster. It's a relief the statues are still around but it's a mystery why they're here instead of on display.

The Town Hall Museum is one of the few spots at Cedar Point that respects and uses --- or even shows, really --- the place's nearly 150-year history. But then, the Town Hall Museum has all sorts of great coin-operated games, including a Rock-ola 1937 World Series, none in working condition anymore. (Here's a video, from an auction house, showing off what the game would be like in good shape.) It'd be so wonderful if these things could be curated better.

Also good news: the Antique Cars ride was there, and open, and running. It even had a crowd, showing what the day was like. (We had like a 15-minute wait for ice cream, too.) This heartened us since the last few times we'd been by the Antique Cars ride --- mostly during Halloweekends --- it was closed. Cedar Point had three of these putter-around-in-cars rides, before the renovations that put in ValRavn, and it'd be a shame to lose a second. The rides take up a fair bit of space, suddenly getting precious at the park, and they're hard, perhaps impossible, to relocate.

And not good news. We knew they were taking out the Dinosaurs Alive walk-through attraction. This had been announced a couple weeks before. We figured to take one last visit to the attraction, a nice-to-see-once thing where you walk around and see animatronics and statues of dinosaurs and maybe read plaques that someone who was sure they'd read about dinosaurs had double-checked for accuracy. We'd visited it once, and saw it while riding Millennium Force --- looking down on a T Rex from a roller coaster is a fun scene --- but not gone in years because it's not got great re-visit value. But one last visit? Absolutely. And ... no. Apparently they didn't figure the Halloweekends was part of the season, and the attraction was closed. And already emptying out. We had a bit of trouble finding the attraction because they'd taken away the signs and such that led people to it. Startling.

So any visit to Cedar Point is a good one, really. Maybe less so when we get there on an extraordinarily rain-heavy day. But the little frustrations --- the crowds closing off some rides, Dinosaurs Alive being gone already, the gift shop being out of the Disaster Transport retro T-shirt

bunny_hugger hoped to get --- took the edge off. And yet there's good despite all that. By this I mean they had the grease trucks back to add to the midway concessions, and the Cupzilla people with the Korean barbecue were there. So it was worth the drive.

Currently Reading: No God But Gain: The Untold Story of Cuban Slavery, the Monroe Doctrine, and the Making of the United States, Stephen M Chambers. You know, for some lighthearted, uplifting reading after that how-to-radio-comedy book. 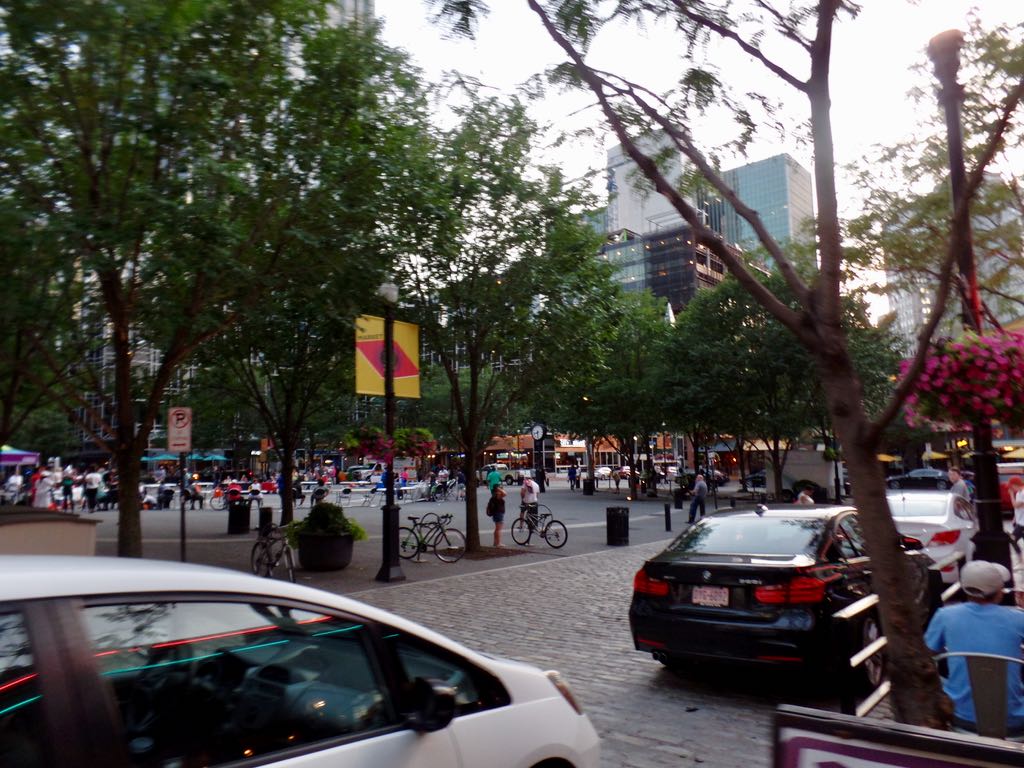 And into Pittsburgh proper! Our search for dinner brought us to this public square we probably couldn't find again if we tried, but it looked like a good hangout. There was some kind of event going on in the center, but we never knew what it was.

chefmongoose advised me about a salad bar and we never located that except right after we'd eaten. 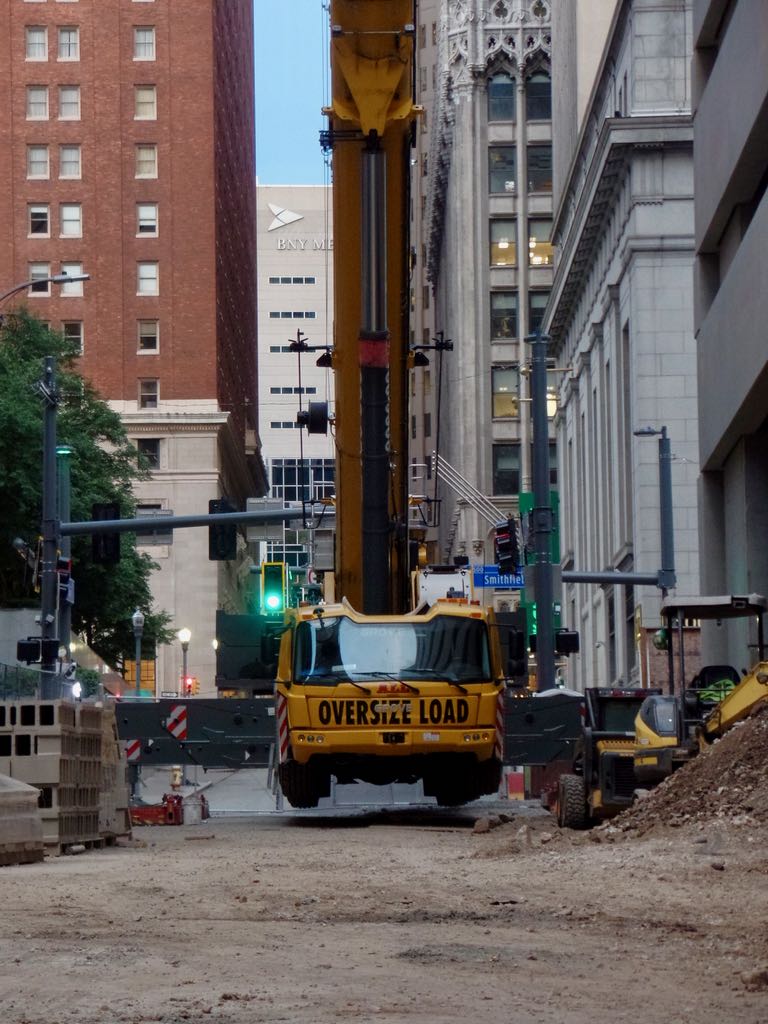 Hover-crane at floating rest outside the hotel's parking garage. 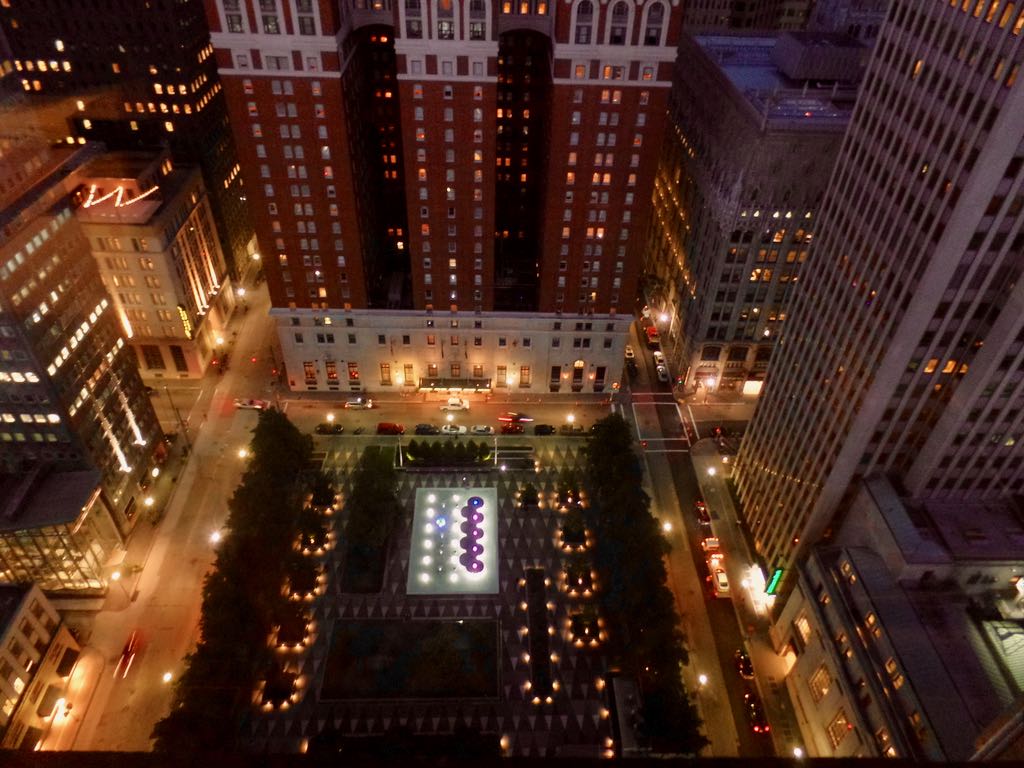 And the view from our hotel room! Which was on the 25th floor, high enough that I could wonder whether it's really a good idea for me to press my camera into the window. I mean, you know, design and installation mistakes happen and it's not likely a hurricane will hit Pittsburgh but ... . So I didn't press against the window long.