So one good place to find letterboxes is in graveyards. Well, they are often in interesting parts of town, or have interesting people in them, and have spots to hide small packages where they won't be bothered. There's a couple basically across the Interstate from our house.

bunny_hugger found a series of letterboxes, a string of five scattered over the graveyard. And so we went to find those in an afternoon outing that promised to let us take do something else, too.

The first letterbox was, it seems to me, the one it took us longest to find. Maybe we had to learn how to read the grounds. Certainly we had to learn how to read the letters identifying which parts of the cemetery were where. But one we had found the first, tied by a wire to an evergreen bush, we had a good sense of what kind of thing to look for in the next boxes. And then --- we could see a deer. It wasn't quite sunset yet, not even quite getting on. But this is a good place for deer to be. It's surrounded by trees, and the grounds themselves are wide and clear and reasonably peaceful and we just watched this animal poking its way around. We saw it a couple times, too, over the course of our outing.

The trickest letterbox to find was in the Jewish section of the graveyard, because we didn't quite find all the names on gravestones that were given as clues to the trail. The oddest one was in the infant graveyard, a section named ``Babyland'' that we thought oozed the disturbing-twee attitude of the 1920s. We were wrong, by the way: Babyland at this cemetery opened around 1960. There was a box not beside any of the graves --- no bushes or other plants to place it --- but in the trees on the edge of this site. We had a successful round, finding all five letterboxes. And it finished filling out my first letterboxing logbook, and gave me the first several stamps for my second logbook. This new one is a travellers-journal sort of thing, from Michael's, with a faux-leather cover and an elastic strap to close it, and pages inside in removable booklets so that it need never be full.

bunny_hugger envies it some. She's far from completing her current logbook.

So the other thing this let us accomplish.

bunny_hugger has fallen into the FindAGrave.com community. Particularly the part where people photograph and post online gravesites. A couple months back someone posted a request for photos of the graves for (we trust) a husband-and-wife pair buried in this graveyard.

bunny_hugger thought she'd do some unknown person a favor by finding and photographing it.

We found the graves after surprisingly few false starts. But there was a problem. The man's grave marker was sunken into the earth, barely visible. I was able to find it only by kicking up some sod. We hadn't imagined gardening would be needed.

bunny_hugger had an emergency shovel in the car's trunk, but that's better for getting a car tire out of a pit rather than getting two inches of grass off a stone.

So we didn't photograph the sites. Instead the next weekend

bunny_hugger went out with a bucket of gardening tools. And, she thought, did a great job cleaning it off. It was easy once the tools were right, and she had nice, respectable-looking grave markers and a gorgeous evening sky behind it. That's when she learned she hadn't put the memory card back in her camera.

So --- just before Grand Rapids Pinball League again --- she made her third trip to the graveyard to do this remote favor. It was easy to find the spot again, and to get several good pictures, and if the skies were not as beautiful on her second trip, the clouds did part enough for a couple minutes. Accomplishment.

Trivia: In 1908 there were three hundred shutouts and six no-hitter games. Baseball would experiment with a livelier ball for 1909 and adopt it in 1910. Source: Crazy '08: How a Cast of Cranks, Rogues, Boneheads, and Magnates Created the Greatest Year in Baseball History, Cait Murphy. 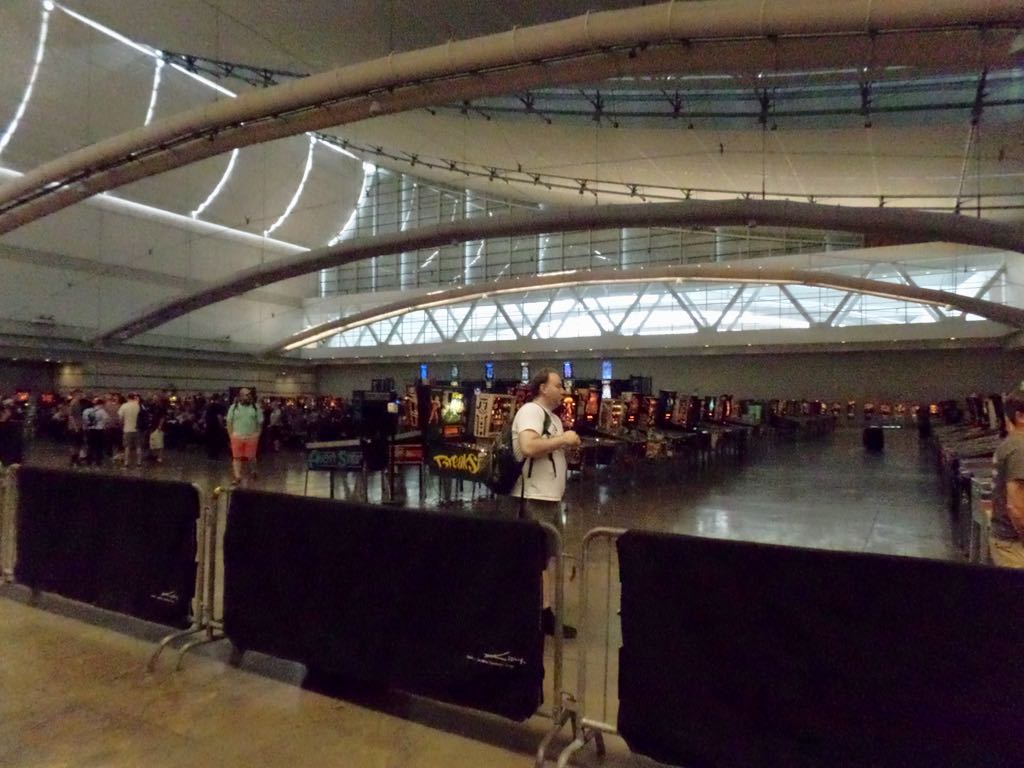 The playing area! Past here are the banks of games for the tournament, and some of the people gathering early to make sure they don't miss opening instructions. 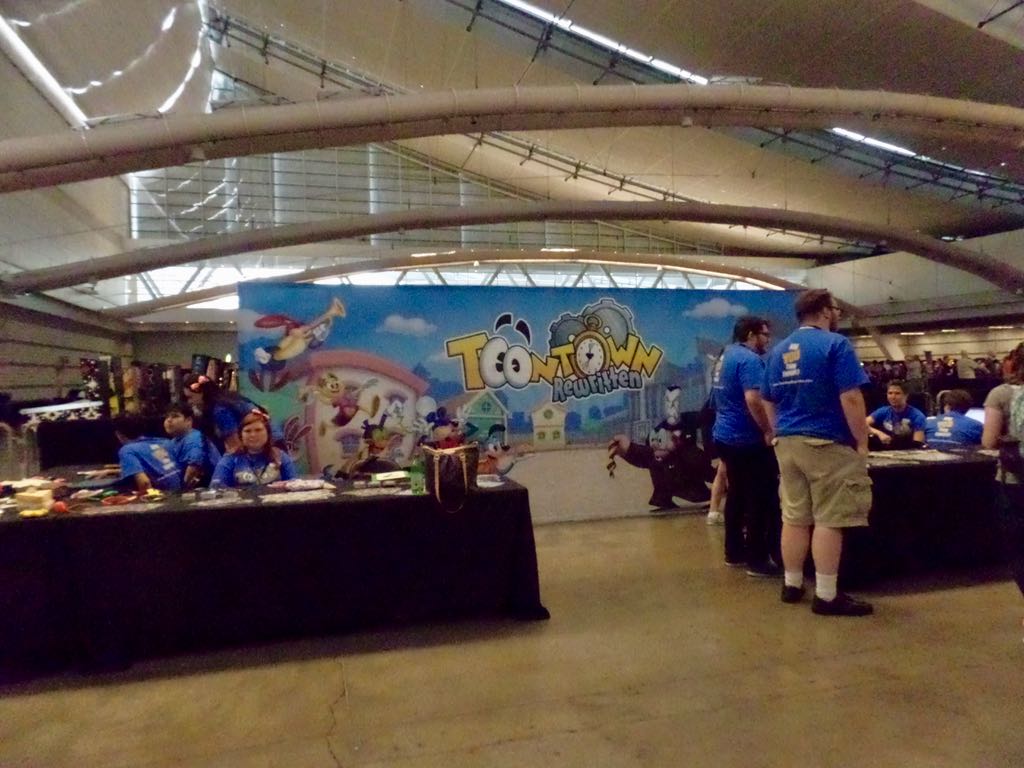 Toontown Rewritten would keep catching my eye, especially later on when they got costume props in. Still haven't played it. 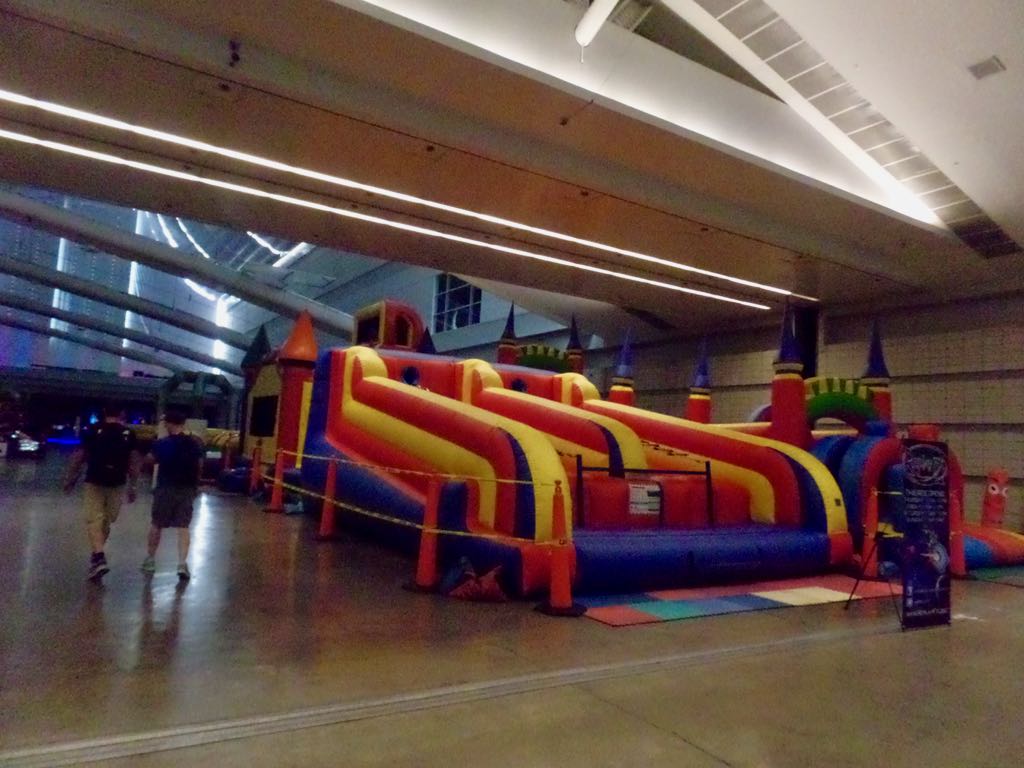 And there were separate, upcharge rides too. I didn't get on any of the inflatable sets, but some Michigan Pinball folks did.