The fourth of the quarterly pinball tournaments

bunny_hugger runs is Fear and Trembling. It's also the one that feels most jinxed. The first one was held the day after the 2016 Presidential Election and it felt even more dismal than that suggests.

bunny_hugger and I were two-thirds of the attendees. The one in 2017 was slightly better attended, with ten people there. Six of them people who'd never been to a pinball event here before, five of them never anything before or since. The augurs were bad for this one too. It would have to be a Wednesday night. Halloween was already an event at the hipster bar. We don't dare do something the day after the election again. So the 24th was the only choice. Which was also a key night for the One Well pinball league, in Kalamazoo. A lot of people who always go to

bunny_hugger's tournaments couldn't make it, because it would screw up their seasons in the Kalamazoo league. Even the day before the tournament

bunny_hugger built the trophies for this, as she always does. Her medium was stuff from Michael's, repurposed, particularly a couple of nicely gothic Halloween-themed candlestick holders for first and second place. Third and fourth place were made with Halloween miniatures, so the quartet had this nice theme of bats and ravens. This was all finished later and under more stressful conditions than

bunny_hugger would have liked. Adding to the stress and chaos: she wanted to adapt her dragon costume of last year into a basilisk costume. This required finding a chicken head --- which succeeded after three costume shop visits --- and repainting the dragon-foot shoe coverings she'd repainted for several Halloween costumes in past years. All, again, way closer to deadline than would really be comfortable.

The format was pin-golf. In this you play pinball not to get a high score, but to complete some goal in as few balls as possible.

bunny_hugger shakes up the format by making players choose one of two alternatives before starting play. Thus the Fear and Trembling title, which refers to the terrors of having to make a choice and is why in an ideal world it would run in the time between Halloween and Election Day. Picking games for the pin-golf course wasn't too hard: the venue has a half-dozen that are obviously Halloween-ready, like Elvira's Scared Stiff, The Addams Family, and Ghostbusters. Others that can be if you squint, like Tales of the Arabian Nights (genies and whatnot) or Indiana Jones (adventure and whatnot). Picking out objectives was hard, and

bunny_hugger and MWS and I spent a night the weekend before the tournament trying out possibilities and making sure they were all doable. Some of these games and objectives we had used last year. But we made them simpler. This followed experience last year where people had a tough time finishing objectives. And advice on TiltForums to the effect of there's no such thing as too easy a pingolf objective. Somehow, in competition, even the simple objectives are hard objectives.

So how did the actual tournament go?

In turnout, pretty good. 13 people showed up, a nice Halloween-ish number. We even got two people who'd dropped out of the Lansing pinball league to put in their entries. And the objectives were, indeed, not too hard for most people. MWS finished the nine holes with 18 strokes, averaging an objective in two balls. Me? Not nearly so well. Despite my having come up with the majority of these objectives, and done all of them the previous weekend, I just stank up the place while actually playing. I think I managed to accomplish only four of the nine at all. The moral victory was going out the final game on a hole-in-one. This was on Monster Bash, where one objective was just to start the Mosh Pit Multiball. (Last year the objective had been to start that Multiball, and then hit the add-a-ball twice, to make it a four-ball multiball.) But, wow, it was hard for me. I'm not sure but I think I tied for something like tenth place. Bit of a fall from last year, when I had a rare first-place finish.

I had meant to go in costume, wearing my scare-crow outfit, and then realized the day of the tournament that I didn't know where that was. So I fell back on the red panda kigurumi, which is safe enough and got a lot of people asking me to say whether I was dressed as red panda or raccoon. I'm always happy to answer questions like that, and offered the protip: red pandas have dark bellies. Most animals, including raccoons and coatis, have light bellies.

bunny_hugger's basilisk costume confused people more, possibly because the chicken head drew so much attention that the bat wings and dragon tail didn't read right away. She did include a printout of information about the basilisk legends and had it ready for people to read, remarkably like me and coatis for my first ten years in furry fandom. (People stopped thinking coatis were a species I made up sometime around when Brandy and Mister Whiskers went on the air. Coatis turned up in a few episodes of that show.)

bunny_hugger figured, the one group who would absolutely recognize a basilisk costume on sight. And maybe they did but they saw her long before talking with her so the delight of recognition that we trust was there passed before we got to see it.

Trivia: The new names of the French Revolutionary Calendar's months were made public in a decree dated 24 November 1793. The calendar had come into operation in October. Source: Mapping Time: The Calendar and its History, EG Richards.

PS: I'm Looking For The Next Set Of Topics For My Fall 2018 Mathematics A-To-Z, so a fresh set of requests.

PPS: And closing out the first day of Pinburgh 2017 here. 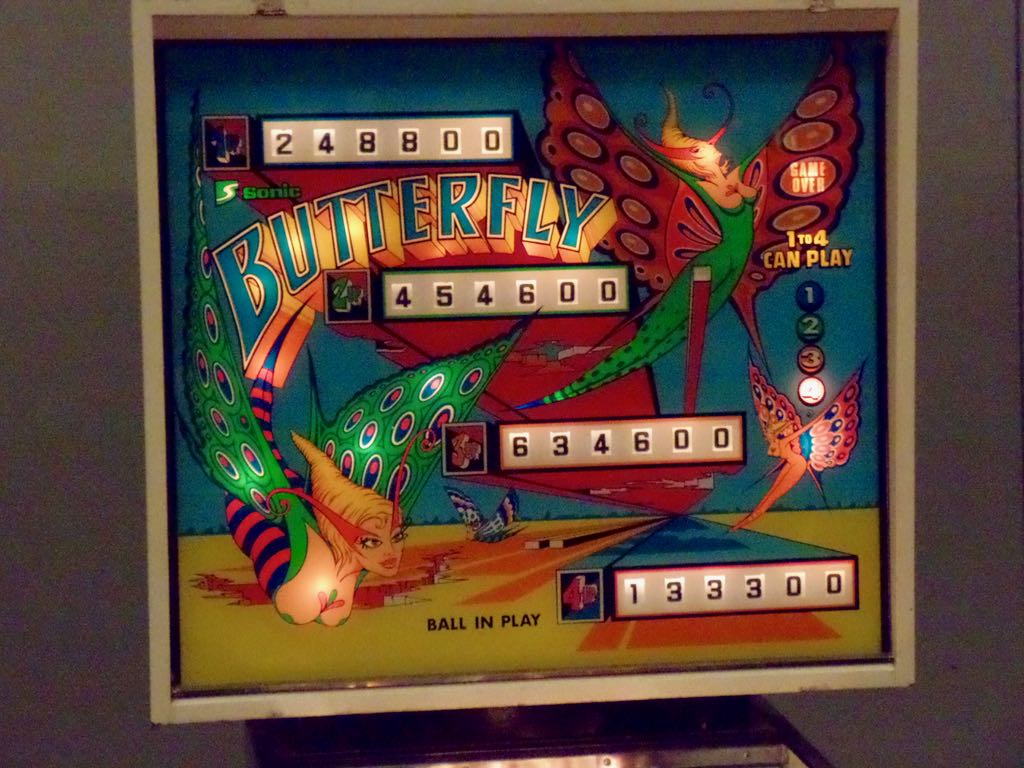 Sonic pinball was a Spanish company, and its games often have this sort of weird, great 70s-novel style to them. If this thing were on a yellow-spine DAW science fiction paperback, would you pause before buying it? No. 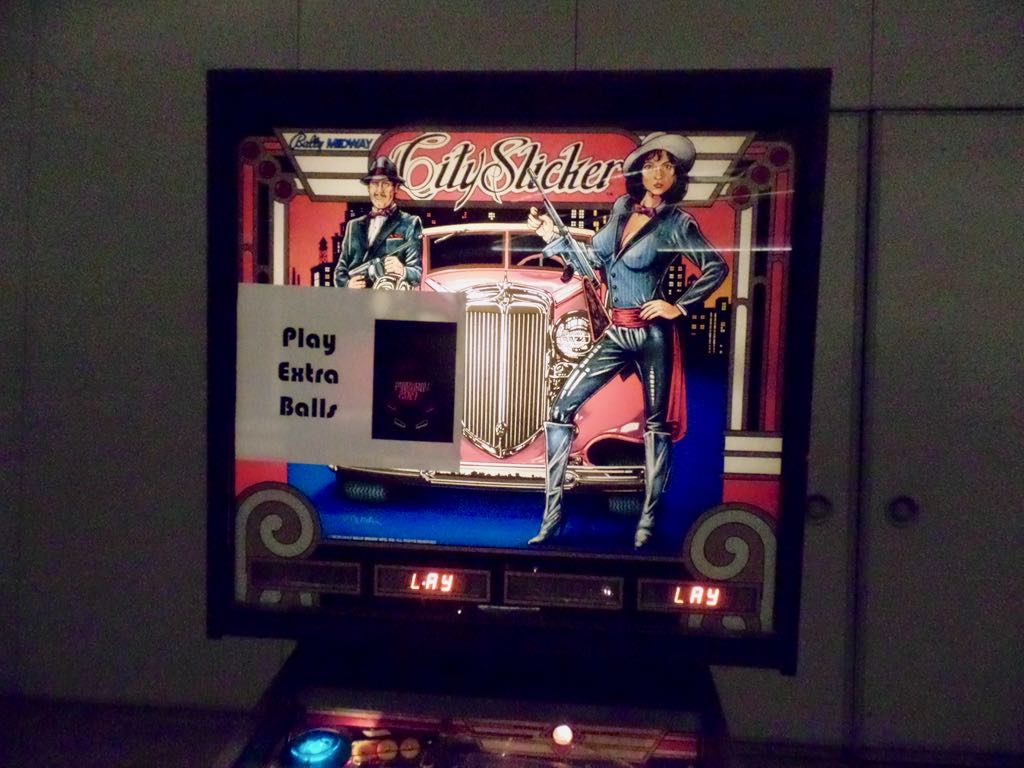 And sometimes you get the occasional backglass art you still can't believe you saw, even when you have evidence of it. Also this game is from the era when there was no clothing material known to humanity that would conceal a woman's nipples, or even just fail to highlight them some more. 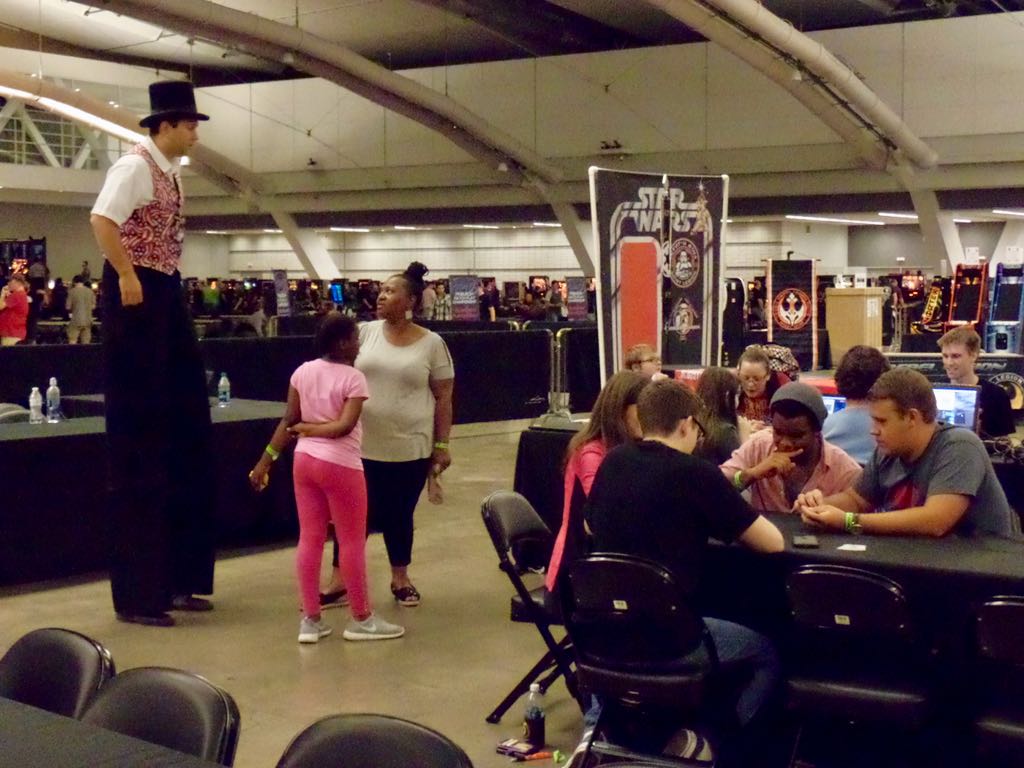 End of the day. People hanging around waiting to see what playoffs might be necessary and what divisions they'll be put in tomorrow. I am impressed with the facial expression of the woman interacting with the stilt-walker.