I wrote a bit ago that the Baby Food Festival was the last major points-gathering opportunity for Michigan Pinball. The current ranking rules by the International Flipper Pinball Association only let every competitor's 20 highest-value events in the state in the year count. So I expected the positions of the top-ranking people to freeze up; they could only move up not just with high-place finishes in high-value events, but by doing that much better than they had previously. I made some miscalculations.

One is that some of the top players hadn't even done twenty events yet. Everything they played the rest of the year would add to their standings. The other is that there was a good high-value event left on the calendar year. This was the November charity tournament run at MJS's polebarn. This was to be a twelve-round tournament, all groups of four players going against each other. By IFPA rules this would let it generate many ratings points. Even more, the more high-value players come. And with it being the last really big high-value event on the calendar ... So, 48 people came. I don't think it quite had everyone who'll get an invitation to the 24-person state championship tournament. But it got close.

Also it would be a chance for

bunny_hugger to bring the repaired dolphin to MWS. And a chance for her to show off her new SDTM licence plate off. Unfortunately the large crowd, and the snow, and having to park on the snow-covered grass, spoiled the chance to draw people out to admire the new plate. People loved pictures of it, though. And it was a chance to play at the polebarn, which had hosted the state championship two years running (though not this coming year). It's a great place to play; around forty games, including electromechanicals, solid-state, and modern-era games. Also the TV showing a series of football games. University of Michigan beating Rutgers by less than I figured. Michigan State playing someone or other. That kind of thing, of interest to people who care about college football. I went to Rutgers, so, I don't.

And how were the tournaments? Well, I started weak, on The Shadow, a 90s game. Finished in third place. But the next game was the electromechanical Bronco, luckily one of the games I'd practiced on before the tournament started. And I took a first place. This started off a great run for me: I'd finish first or second in each of the next six rounds, even playing against people like AND --- two-time state champion --- or JRA --- third place in the state right now, and a good candidate for champion. For a little while I was even on top of the standings. Then I started to flop; got a third place, a fourth place, and a third place finish. And then ...

bunny_hugger. She started well, a 2nd place finish on Attack From Mars, and that against JRA. It was close, though; one bad bounce and she'd have gotten third. But one more good bounce and she'd have gotten first. Second round she got a first place, on Tommy, with maybe her best game of that ever. Then a second place on Banzai Run, this crazy late-solid-state with a second, vertical playfield. And then she started to skid, with three third-place finishes, many of them by close margins. She felt herself sliding out of the tournament altogether. I finally got her to go outside and shake herself out, shaking the bad out of her play. That worked: she got a first place on the next game. Then a second place, losing to RLM by a whisker that she was upset about the rest of the night. Then a first place. And then ...

bunny_hugger? That was our eleventh round. Everybody finds it funny when we're set to play one another directly. Thing is, it's stressful. She's certain she can't beat me; but that's just not so. And if I do beat her, then I have to be consoling even when she's blaming me for not playing worse. Well, 11th round, on the solid-state game Royal Flush --- one of the few she doesn't feel like she understands --- I beat her, and everyone else. She got a third place finish.

So she was declaring herself knocked out of the A Division, the top 16, the people who might get a decent IFPA ranking bounty from the tournament. But there was one round left. And yes, we got put up against each other again. This time on another solid state game, the single-player Super Star. I put up a lousy game, finishing last. She beat me, but only by getting third place.

For all the rounds that

bunny_hugger spent envying my alleged superior skills, we ended up one point apart. I was in a three-way tie for 10th place.

bunny_hugger was in a four-way tie for 14th. We'd be among the many people having playoffs to work out our seeding. And, for her, whether she'd be in the A or the B Division.

Well, my playoff, on Fish Tales, dropped me into 11th place. Hers, on Super Star again, put her into 17th place, the top of B Division.

This launched us into finals. For both of us, three four-player groups, the top two of each moving on. Those top players were ... not me: I put up pretty mediocre third-place finishes on three games straight and left the tournament in 13th place.

bunny_hugger had two mediocre and one lousy game, tumbling to 23rd place. MWS finished with the same record

bunny_hugger had, but beat her in the playoff so went to the A Division; he finished tied for 15th place. So we had an evening of trying to tell ourselves that we didn't actually suck and that it wouldn't sink any of us in the state championships.

Which might not be so. The tournament ended up being incredibly high-valued. AND, who ultimately won, took 28.67 rating points for it. For scale, I've earned 84.36 points all year. Even fifth place --- which is usually where the points totals get negligible --- took 10.58 points, more than the winner of the Lansing Pinball League is getting for this past season. The result of the tournament didn't make much difference to the highest-ranked players, like, the first through fourth place. But it dropped me two positions, and

bunny_hugger a couple too. We're both still in the running. But now there's three, maybe four, events left on the calendar that could give enough points to move people in the standings. And we have reason to think some of the folks who cleaned our clocks here are going to go to them. One of them

Trivia: After local ministers protested the name of his ``Heaven and Hell'' dark ride at the Omaha International Exposition of 1898, Fred Thompson advertised his request for a new, acceptable title; within ten days he was advertising its new name of Darkness and Dawn. Source: The Kid of Coney Island: Fred Thompson and the Rise of American Amusements, Woody Register. (It's not clear to me whether Thompson figured to seed controversy or whether he took skillful advantage once it was there. It's also not clear to me whether he had a new name ready to go or whether he did take one of the many suggestions.)

PS: My 2018 Mathematics A To Z: Quadratic Equation, an essay that ended up like four times as long as I figured it would. 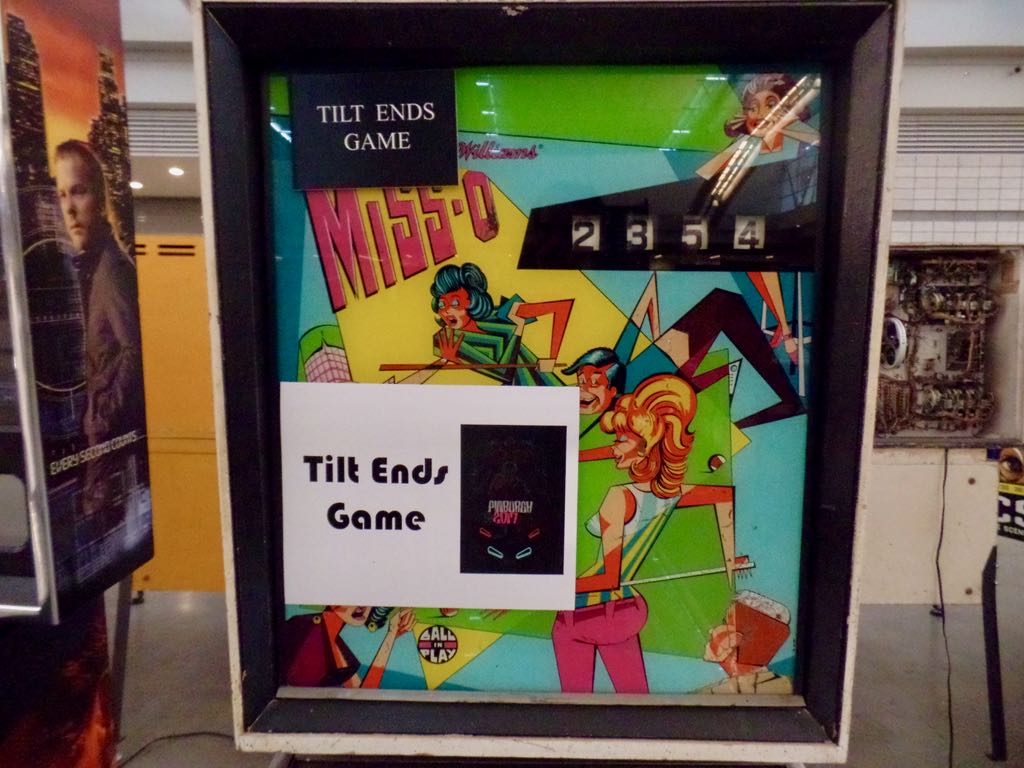 Backglass of the 1969 Williams game Miss-O which caught my attention for being crazy angular even for an era that liked crazy angular art and also for having the name Miss-O. Yes, it's Christian marche art. The pinball database says Williams wanted to call the game Miss-Q, punning on 'mis-cue', but changed when they heard this was something dirty in French.

But ReplayFX was over, at only 5 pm. We left for the last time for the year. 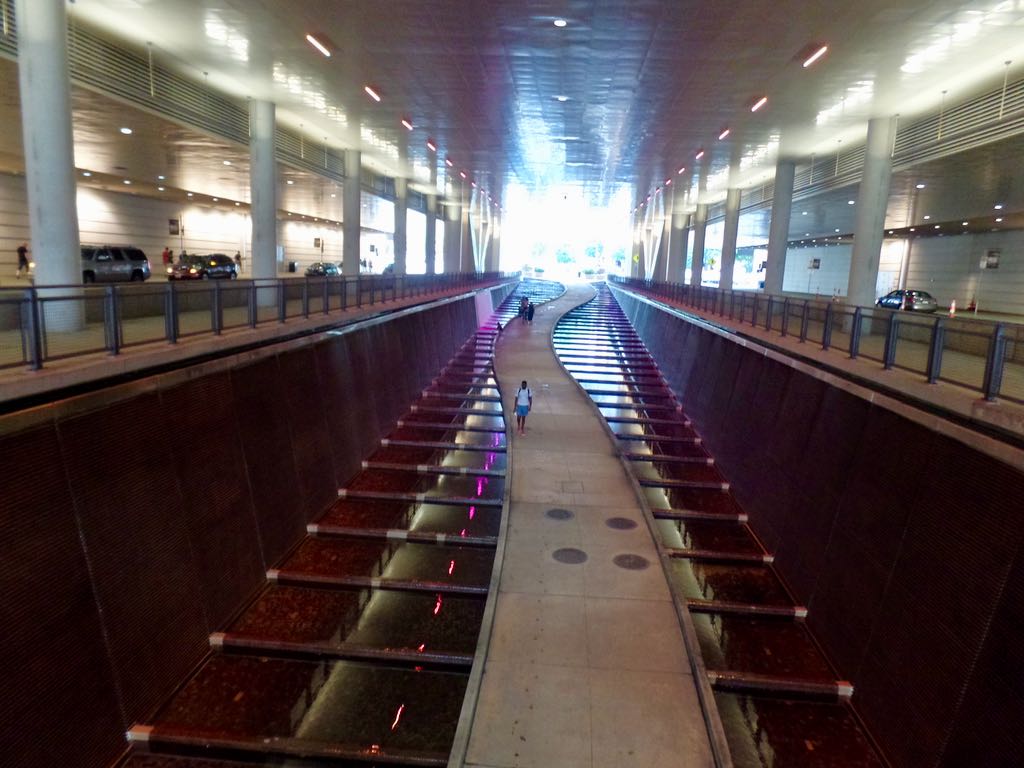