This month saw the conclusion of

bunny_hugger's second year running the Lansing Pinball League. We had some things better-organized this year. Better-designed scorecards for the regular season and then for finals. A more nearly debugged spreadsheet so people could track their standings through the season. A box with everything we need, week to week, so we can set stuff up easily.

So the end of the regular season brought a surprise. CST, ten-time league winner, had not finished on top of the standings. This had happened once before, the first year that we had a playoffs finals. (The International Flipper Pinball Association, viewing head-to-head play as the sine qua non of competitive pinball, insists on some head-to-head competition for an event to count. Lansing League had, and still does, set its regular-season standings by having everyone play the same sets of games, and ranking based on how one does each game. So while we play together, we're not playing to beat anyone particularly head-to-head.) He came back from that to win, though. Of course he would. The regular season serves to decide who'll be in the A Division and who'll be in B Division. And to set seeding for the finals tournament. Seeding is worthwhile because the higher seed gets to choose what game to play, or whether to take a particular order and make the opponent pick the game.

The first shock of the night, then, came after the first round, when DMC beat CST, two games to one. This sent CST to what is either called the Losers Bracket or the Second-Chance Bracket, depending how nice you are about being in it. Our finals are a double-elimination format: you have to get beaten in two rounds of best-two-of-three play. By then I'd already been knocked into the Second Chance Bracket, so, the only way for me to win the league this season would be to knock out CST. I didn't do that. I didn't win any game against him, although I did at least make it competitive by having a decent round of Game of Thrones. He had two lousy balls, and had to manage a quite good third ball rally to win.

In the next round CST faced IAS. IAS is the person who beat him in the regular-season standings. IAS has been one of those quietly potent players who keeps surprising people by being as good as he is. This would be a thrilling match to watch, especially for me, who now had nothing to do but manage the paperwork of people turning in results from their matches and sending out the new matches. The CST-IAS match went to three games. The second featured CST, as often happens, putting up an awesome game on Scared Stiff, taking the Grand Championship along the way. Little feels so good as getting on the high score table during a tournament game.

For the third game of their match, IAS had choice. He picked one of his powerhouse games, Getaway. CST is also excellent on Getaway; some seasons ago, facing elimination at MWS's hands, CST put up just short of a billion points on the game. 50 million is a solid score, and 100 million usually a winning score. This time around ... CST has a house ball, first ball. IAS does not; he puts up 200 million points, and then has to answer

bunny_hugger's query about how you get that many points that quickly on that game. Loops, it turns out. CST has a house ball, second ball. IAS has a short-lived but fair ball, getting a couple tens of millions more points. CST gets down and gets serious. He thrives on pressure, it seems, and we've wondered sometimes if he embraces falling into the Second Chance Bracket as a way to play when it feels serious. And he starts playing a good, solid game. That ends before he can score enough.

CST is out, beaten after a ten-season champion streak. He won't even get a third-place trophy; he's too far out for that. People clap, recognizing the end of a long domination of our league. When the league started there was CST and everybody else. Now, the league's reached the point where there are a bunch of great players, including ones who can reliably beat CST on some games. The league's just gotten tougher.

The league's to get tougher still. Next season we expect that AR2, who's a top-20 player in Michigan, Ohio, and Illinois all at once, should join the league. He's going to Michigan State and trying to figure out how to get to league games. Somehow our repeated explanations that ``there's a bus that goes directly from campus to right in front of the bar'' hasn't got through to him yet. But if he does --- well, that'll be even tougher on me. That Election Night, 2016, finals, when CST and I finished first and second, might be my ultimate high point.

IAS did not win the league either. Having slain the giant he got beaten himself, by DMC. DMC did not win the league either. Having slain the giant-killer he got beaten by MWS. This was in a single match --- DMC was in the Second Chance Bracket; MWS had gone undefeated --- which included an incredible, and incredibly high-scoring, game of Star Wars. Had it not been for the Getaway drama between CST and IAS it would have been the match of the night. As it was, it was still incredible. Both DMC and MWS put up scores of about 1.8 billion; this on a game that I can't get reliably more than about 300 million on, and on which a billion points would normally be the a night's champion. Both got onto the high score table. MWS won by a couple million points in this incredible game, and spent DMC's last ball quietly cursing himself for having tilted a bonus that probably would have given him up to a hundred million points in breathing room. (Had he lost, MWS would not have lost the tournament; they'd just have gone to another game, and possibly another best-of-three match.) And it was followed by a game of Deadpool, on which DMC is normally a superlative player; he might have won that, had he not tilted away a bonus himself.

Still. A few seasons ago when we first thought CST was mortal we wondered who might beat him. And who he might be able to take being beaten by. We thought I was one of the people who could dethrone him. MWS was another, and always the more likely one to. It tells you of CST's skill that, ultimately, it took the cooperative work of three people to dethrone him.

With my rapid elimination from finals I finished the league in eighth place, after having finished the season in sixth.

bunny_hugger exited finals in as few rounds as I did --- and we mercifully did not have to play one another for it --- but since she finished the season in fifth place, she ended up taking seventh. I think this is the first time she's beaten me in Lansing League, regular season and finals. And that's great, and I hope she remembers it when she hears those doubts about her being as good a pinball player as I am.

Trivia: The John Rennie-designed London Bridge, opened 1831, was widened by ten feet between 1902 and 1904 to keep up with traffic demands. Source: Old London Bridge: The Story of the Longest Inhabited Bridge in Europe, Patricia Pierce.

PS: My 2018 Mathematics A To Z: Randomness, a topic I've circled around before but, you know what? It keeps having stuff to talk about.

PPS: More of the morning in Kennywood, early August 2017: 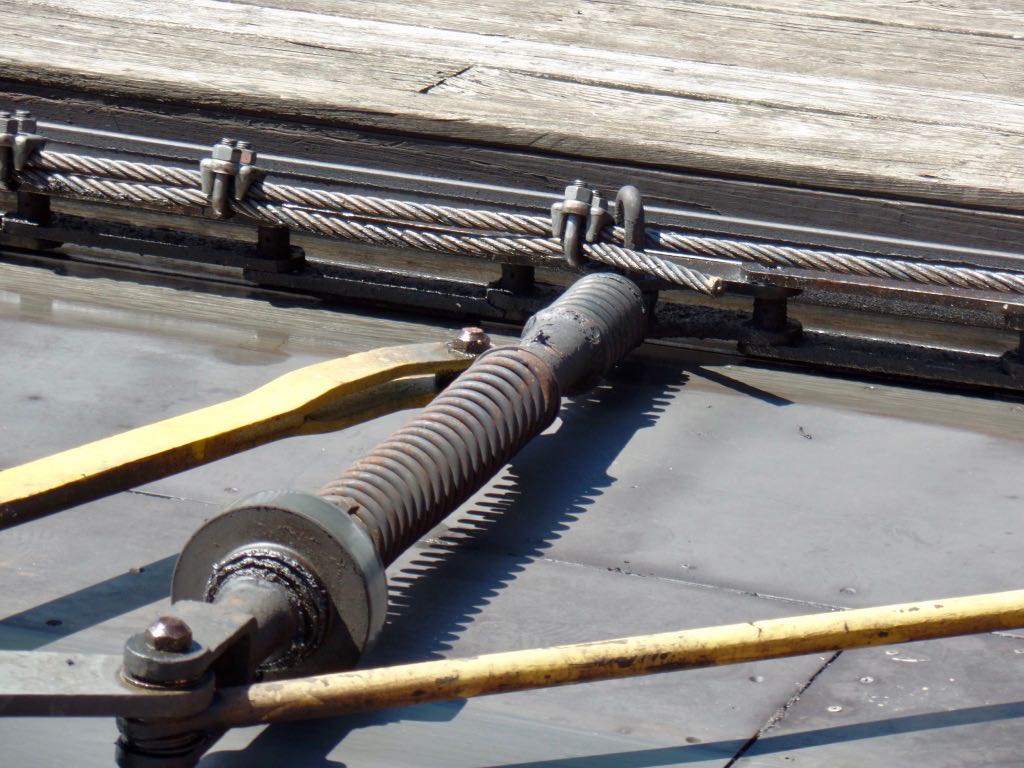 A little something for you fans of knots and whatnot: the cable and the shock absorber mechanism for The Whip. I'm curious how often the cable needs to be replaced, or at least re-tightened, for the ride to work well. 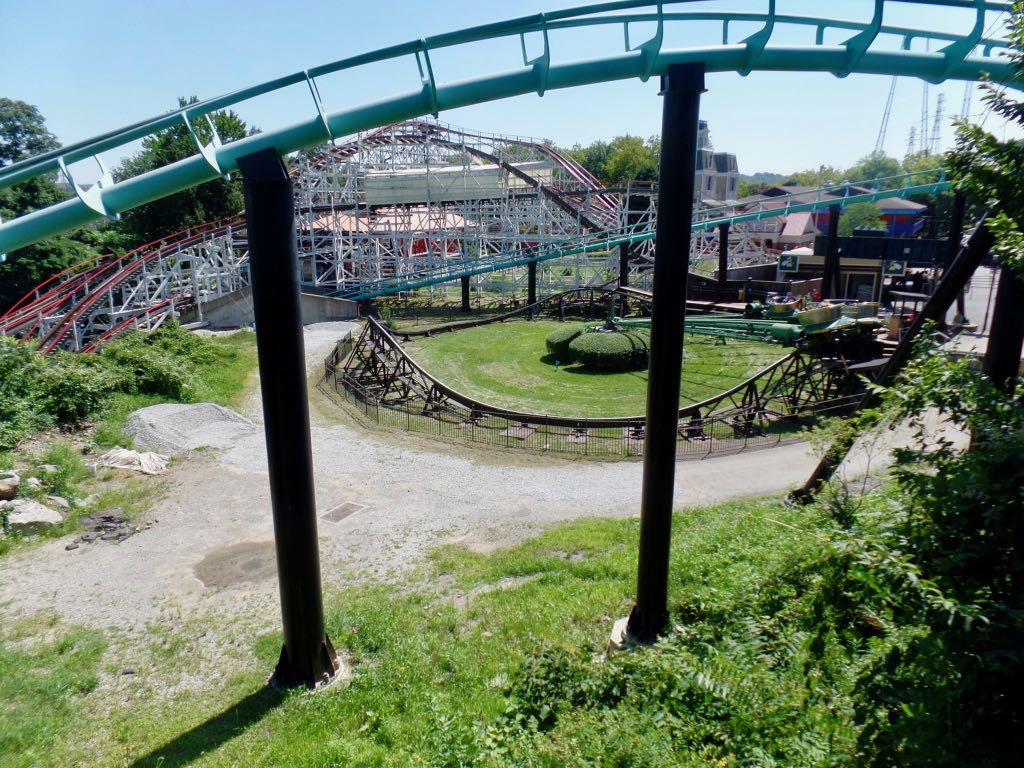 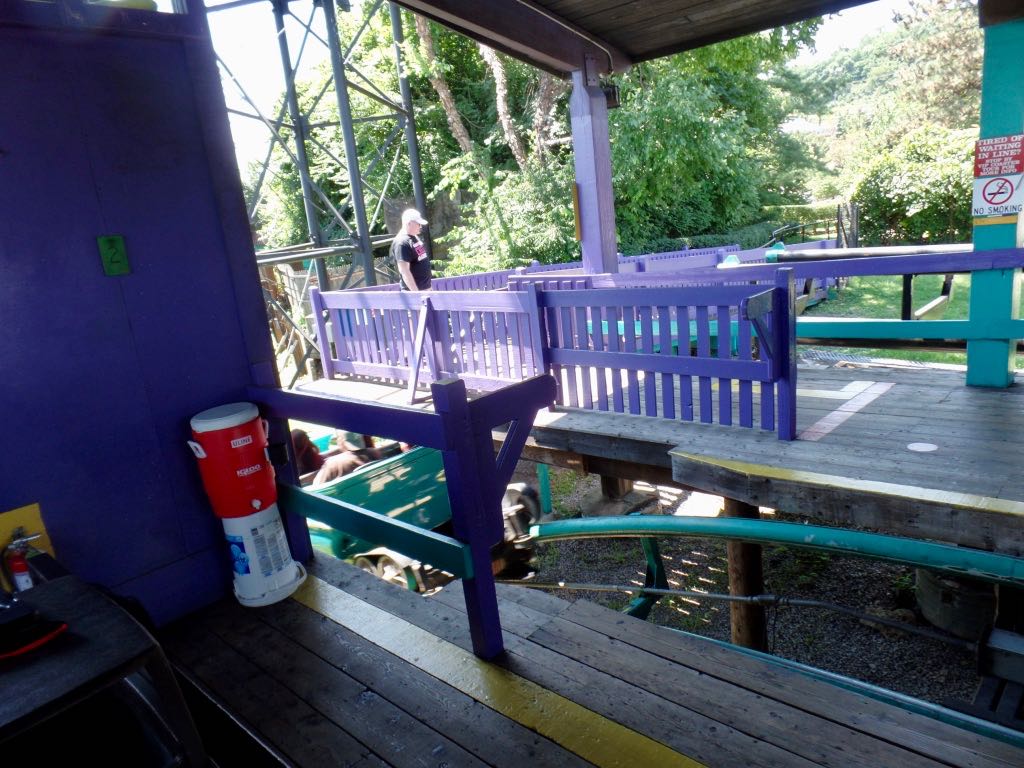