Closing out the Lansing Pinball League season is a cute little tradition we call the Zen Tournament. Or the Split-Flipper Tournament if we're being a bit less vaguely casual. It's a team event, pairs versus pairs. Each person in a pair controls one flipper. The Zen Tournament name comes from a loose, vague allusion to the sound of one hand clapping. In past years the league has arranged teams by regular season standing: the highest-seeded person there gets matched with the lowest-seeded person, second-highest gets paired with second-lowest, and so on. The thought was this made the team skill level as nearly equal as a rule could. But after a lot of requests for ``couldn't we pick our own pairs'' league president

bunny_hugger decided, yeah, let's give it a try. This let the two of us pair up once again; last time we were a team together, we won. And of course an odd number of players showed up. We took volunteers and picked one at random to play on two teams. This is a scheme we've used before. We've also used ``get someone who just happened to be in the bar to play'', in the past.

bunny_hugger picked double-elimination. This is the format used for the main league finals, two weeks before. Every team plays until they're beaten in two matches. Each match was best two games of three. Previous years have used different formats, including a round-robin among all teams that ended up in all but one team tied for second place. Double-elimination promised to give plenty of play time and a chance to see all kinds of weird head-to-head matches play out.

bunny_hugger and I do? Well, we were the second-highest seeded group, so we got a first-round bye. In our first competitive match, we ... lost, two games to one. We had some good play, including a game of Attack From Mars that would've been a respectable league night game from either of us. But we were dropped down to the Second Chance Bracket and would have to carry on through that.

And we did! Our high seeding meant we always got choice of the first game. And we found games that we could play extremely well. The Addams Family, Tales of the Arabian Nights, and Junkyard particularly. On all of them we put up some scores that would have been good regular play. Arabian Nights and Junkyard we were almost too good on: we played well enough to win free games. There were a couple groups we expected to smash right through us, and they just didn't, including improbable results like both our teams in a race to the bottom on Lord of the Rings.

bunny_hugger and I lost that race to the bottom, and --- to our amazement --- we were put up against MWS and his partner for the finals.

To our amazement, also, we won the match, two games to one, thanks in big part to a game of Ghostbusters that went far better for us than we could have counted on. It had been one of MWS and partner's aces all night. This didn't win us the tournament, since MWS and partner were in the Winners Bracket; we would have to play them a second time. And this second match in a row we again went to three games. And, unfortunately, lost the final game. After an astounding run through the Second Chance Bracket we just came up a little bit short.

Further amazing: it was 1:00 in the freaking morning. We started a little bit later than the usual 7:30 hours, as

bunny_hugger was delayed getting out of work. But we didn't start that late. The Zen Tournament, with fewer players, somehow took two and a half hours more than the actual league finals.

It's a mystery why. The player who'd had to double up is part of it, surely, since it was so easy for one of his groups to just have to wait for him to finish playing for the other. But no other groups directly had to wait for that, and one of his groups was knocked out relatively early in the night. I think the problem might be all those ten-million-point games

bunny_hugger and I were putting up on Arabian Nights and Junkyard. Well, not just us. I think it might be that after eleven seasons of this, the Lansing League players have figured out how to play Zen Tournaments well.

(Zen tournaments don't count for pinball rating points. The International Flipper Pinball Association admits it can be great fun to play weird like that, but won't sanction anything that isn't, at heart, one person at one table playing at once.)

Anyway it's a shame for us to have played so well, for so long, and to just barely come up short. Our egos will recover, though, at least in time.

Trivia: Woodrow Wilson sailed to Europe from New York City on the George Washington, starting the 4th of December, 1918. The launch was accompanied by Army planes and dirigibles. The ship was escorted to France by Navy destroyers and battleships. Source: Paris 1919: Six Months that Changed the World, Margaret Macmillan.

PS: How November 2018 Treated My Mathematics Blog, the easiest yet most tedious thing I write all month in my mathematics blog!

PPS: Think you've seen everything Kennywood offered us in 2017? We're not even close to done. 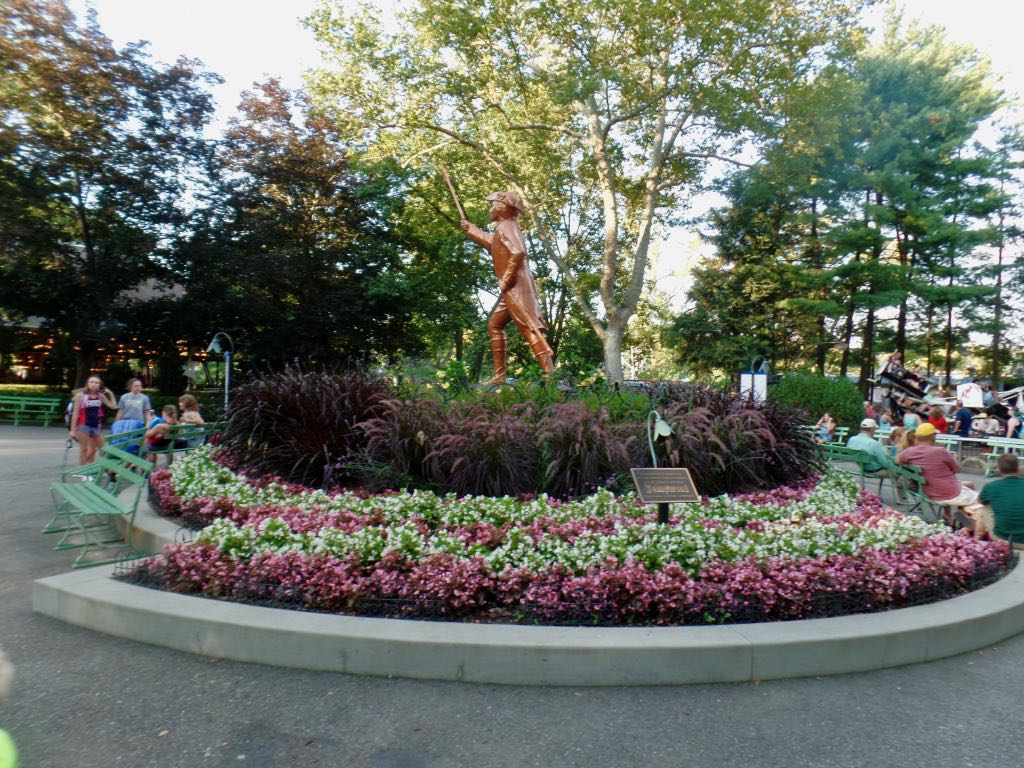 Another angle on that garden with George Washington ready to attack the Johnny Rocket's. 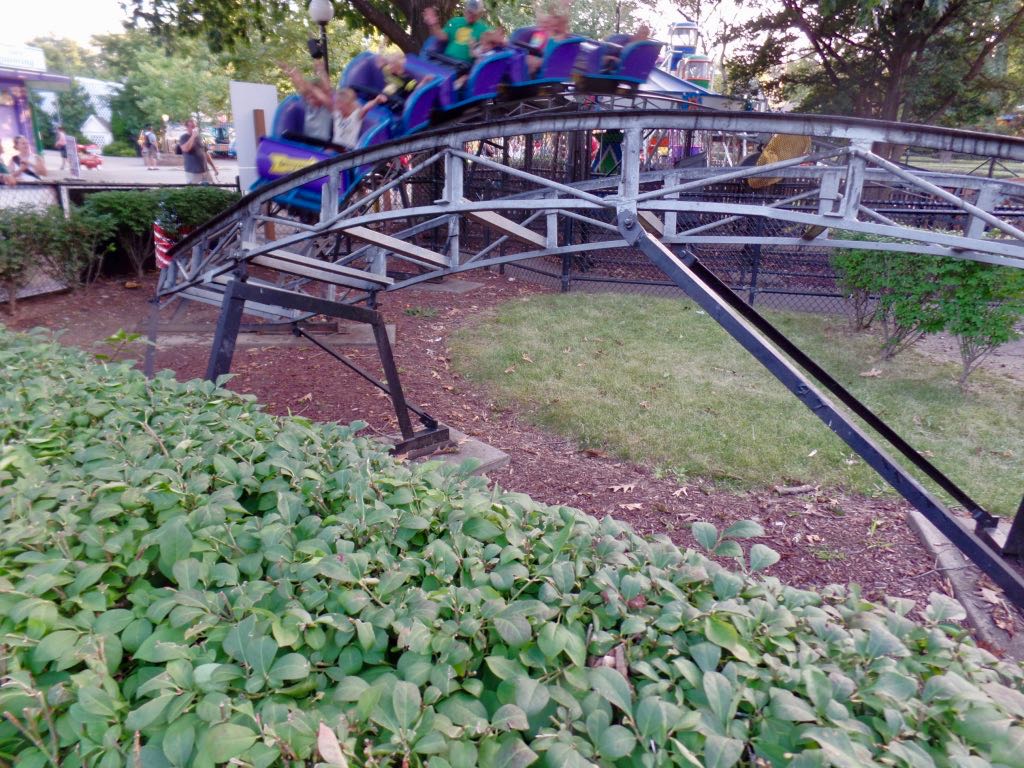 Li'l Phantom! The roller coaster in Kiddieland. It's a Molina and Sons oval and it's been at the park only since 1996. And it turns out they let adults on, even unaccompanied. 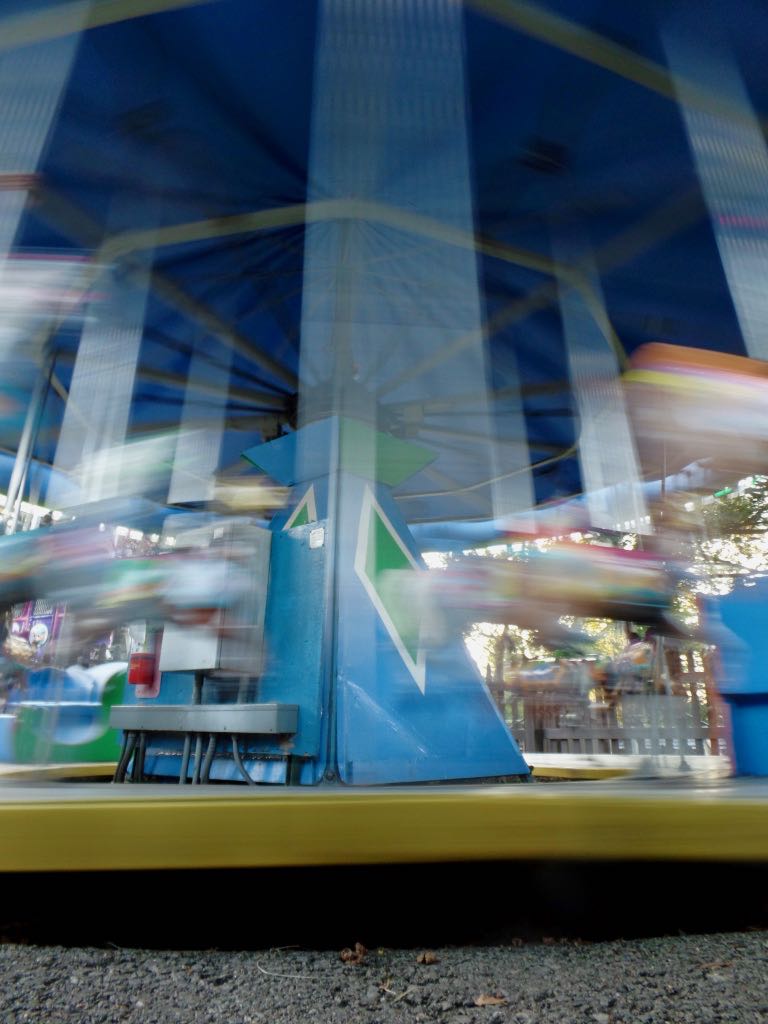 The Kiddieland carousel, at speed. It's a tiny model that we see in a bunch of parks, including Conneaut Lake Park and (in New Jersey) Keansburg.