My mathematics blog has returned to the lassitude it usually enjoys after an A To Z sequence. All that's been going on lately has been comics, and not a lot of those. Here's this past week's content:

Now for the real, important questions: What's Going On In Mark Trail? Who Are These Guys Mark Trail Is Punching? Enjoy this October 2018 - January 2019 plot recap before looking at pictures of Conneaut Lake Park, dated Labor Day Weekend 2017. Extreme-perspective view of Conneaut Lake Park's sign, and across the street, the Blue Streak roller coaster. You can see their panel sign for the ride; that new sign and logo dates, I think, to 2014. 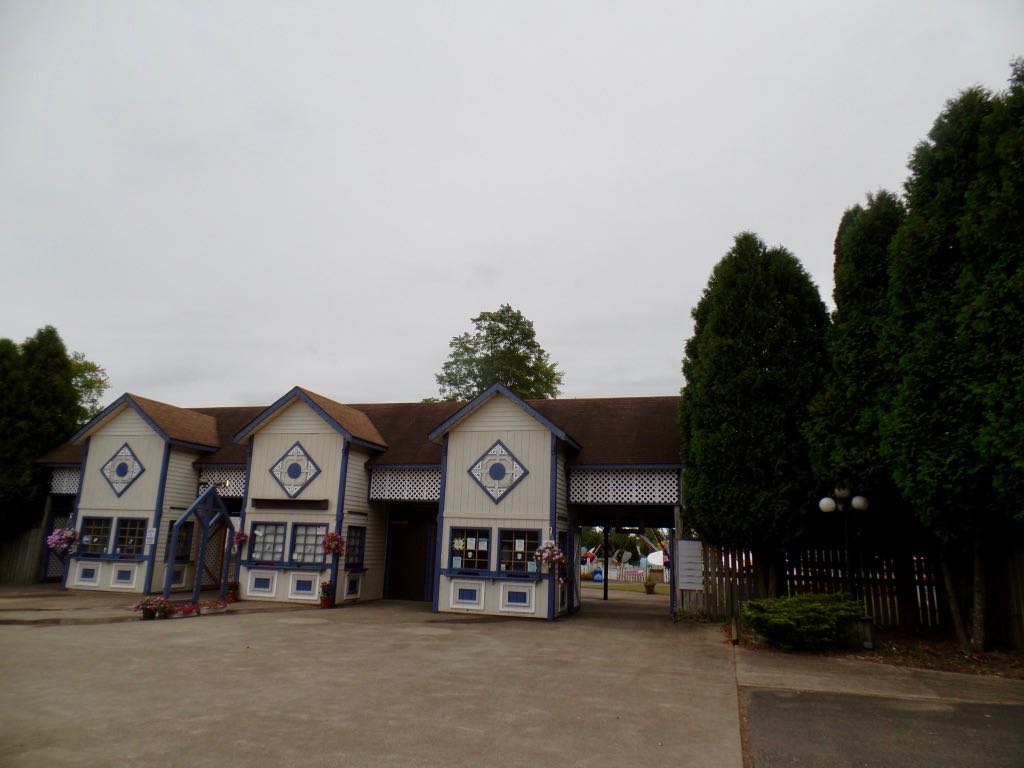 Entrance gates to Conneaut Lake Park, icons of the time when they tried to be a gated, admission-charging pay-one-price park. 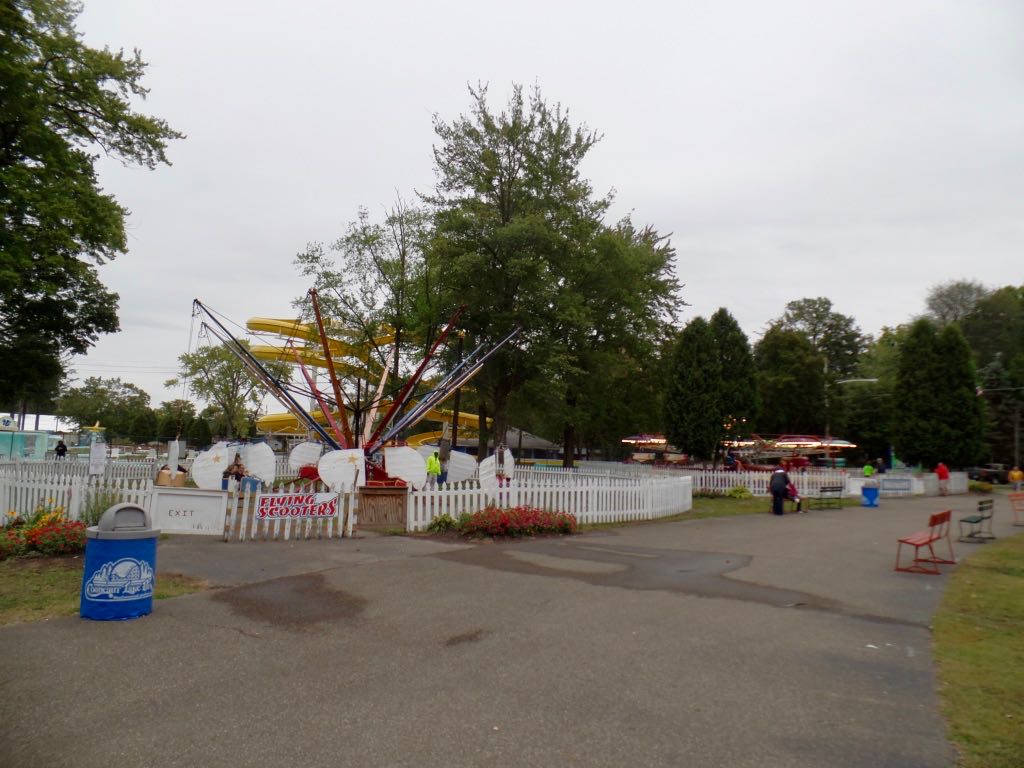 The first rides you get to in Conneaut Lake Park, if you go in by way of those entrance gates. I assume the Flying Scooters are decades old, although the rides have made a comeback and started appearing in new-made models. Note the park is able to support having its logo painted on its trash bins now. 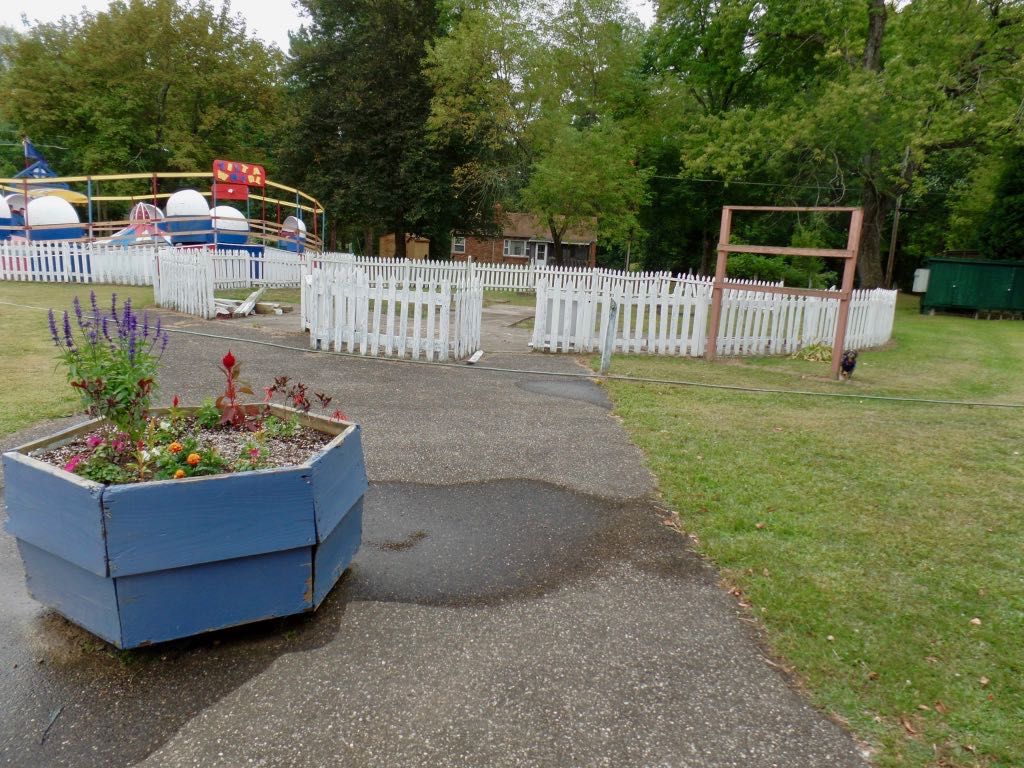 The ghost of a ride, along with a planter that ... is a bit hard-used, but has got flowers in it and even got them watered recently. 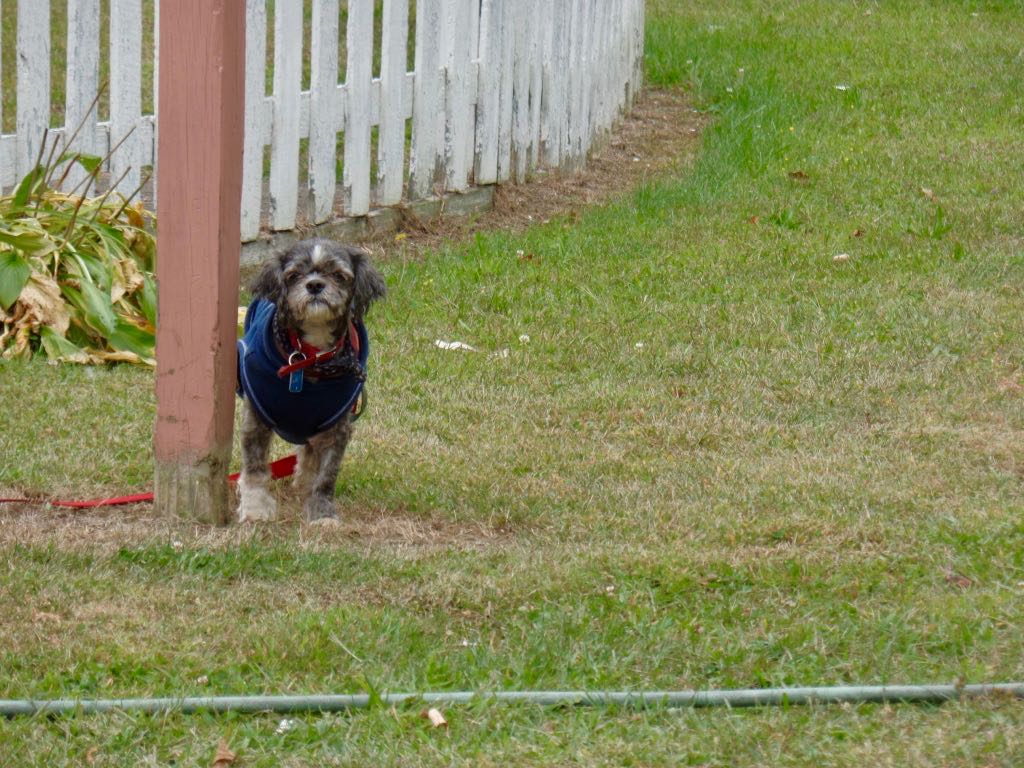 This dog would like to know what, precisely, my deal is. So would I, pupper. So would I. 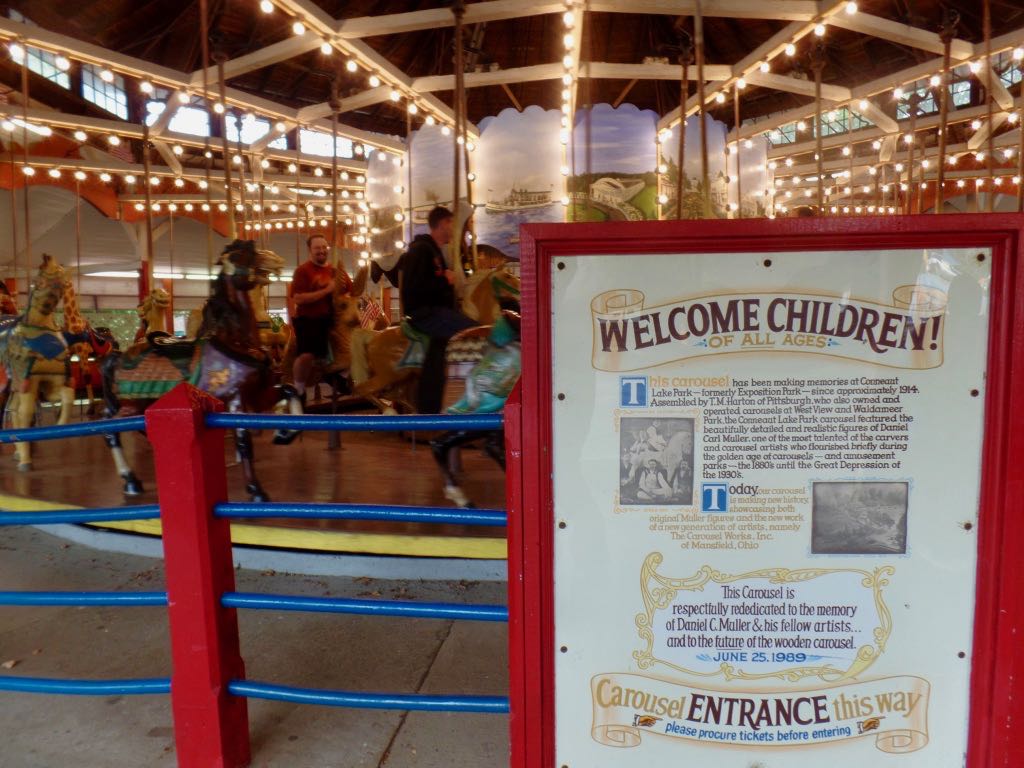 Welcome sign explaining the park's antique carousel. Nearly all the mounts on it are replicas, as the originals were sold off to keep the park alive, although the replicas are getting near old enough to be of historical interest in themselves. They come from the Carousel Works of Mansfield, Ohio, which has been doing new carved carousels since the late 80s. 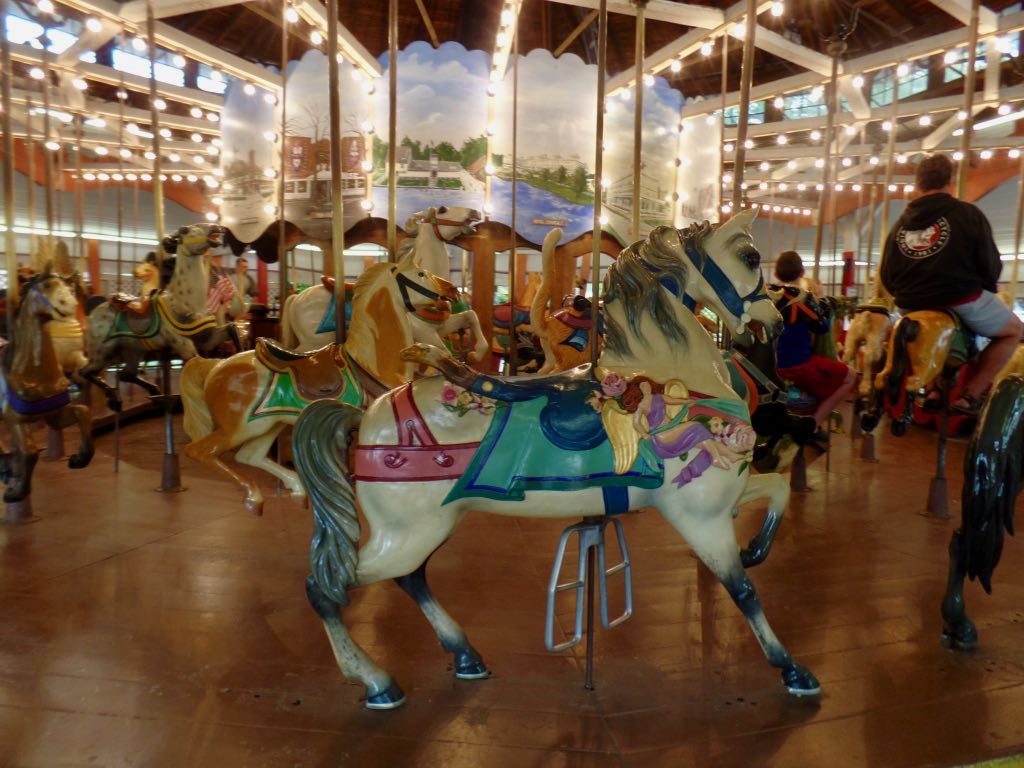 Some of the horses on the Conneaut Lake Park antique carousel. 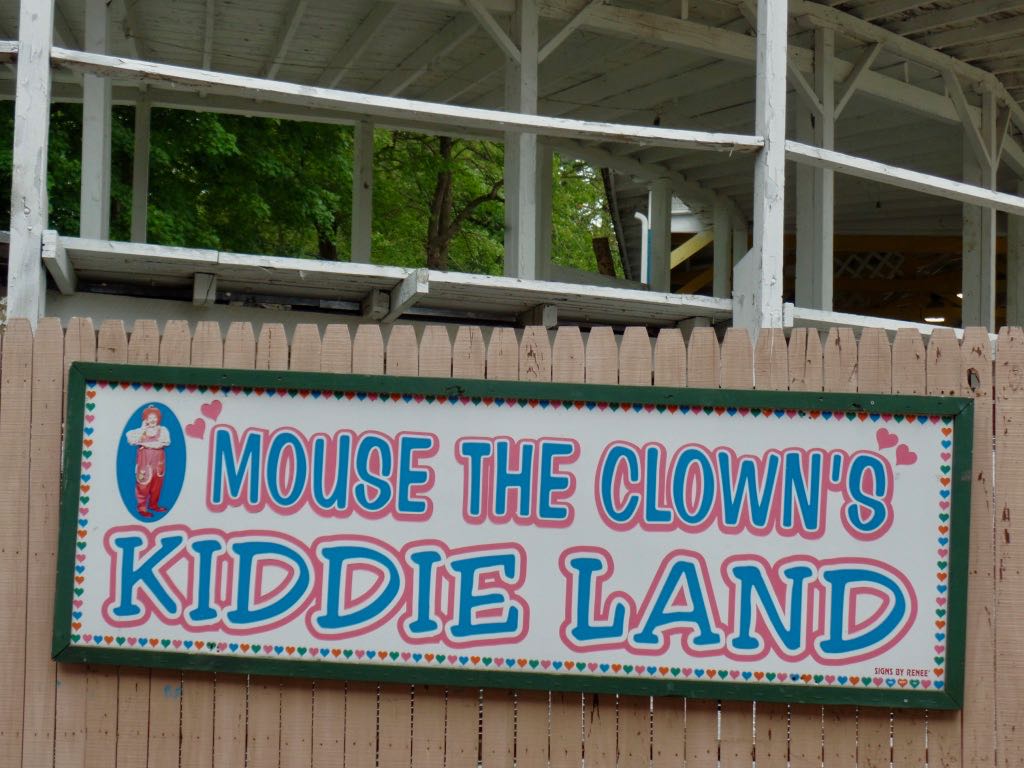 Sign attached to the fence between the carousel and the Blue Streak roller coaster. It's not wholly misplaced, since the kiddie land is just south of the carousel. I'm not clear when the heyday of Mouse was, though. 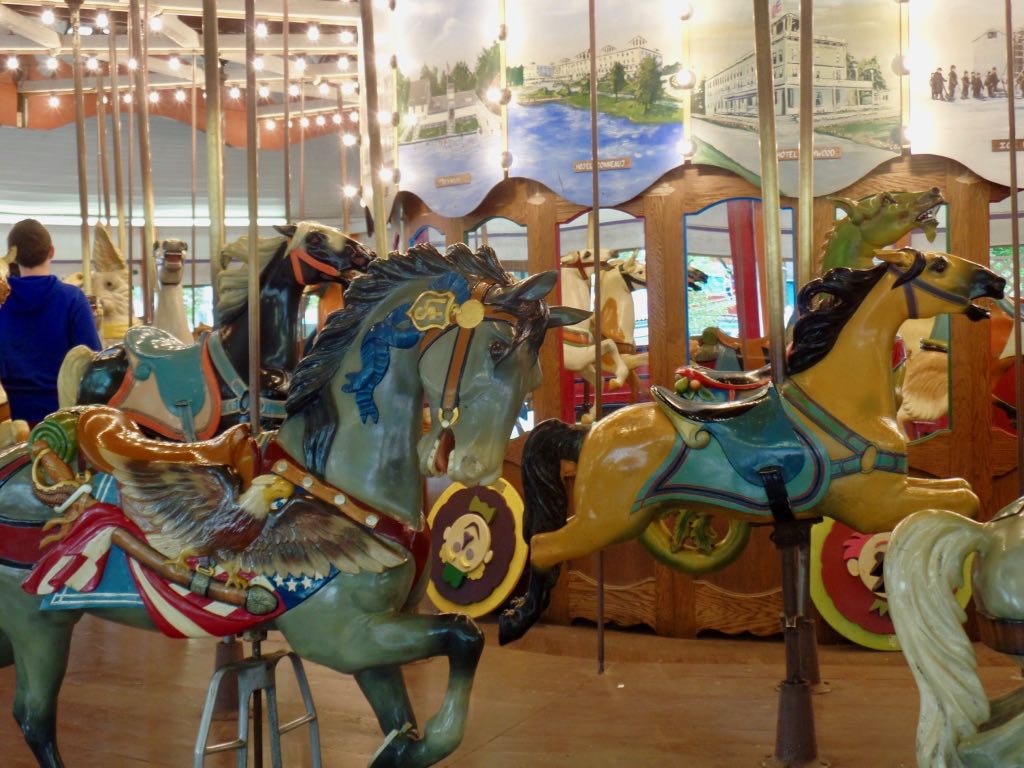 More of the (replica) horses on the Conneaut Lake Park carousel. The one on the left has a strong Western-cavalry motif, one of the common styles of antique horses. 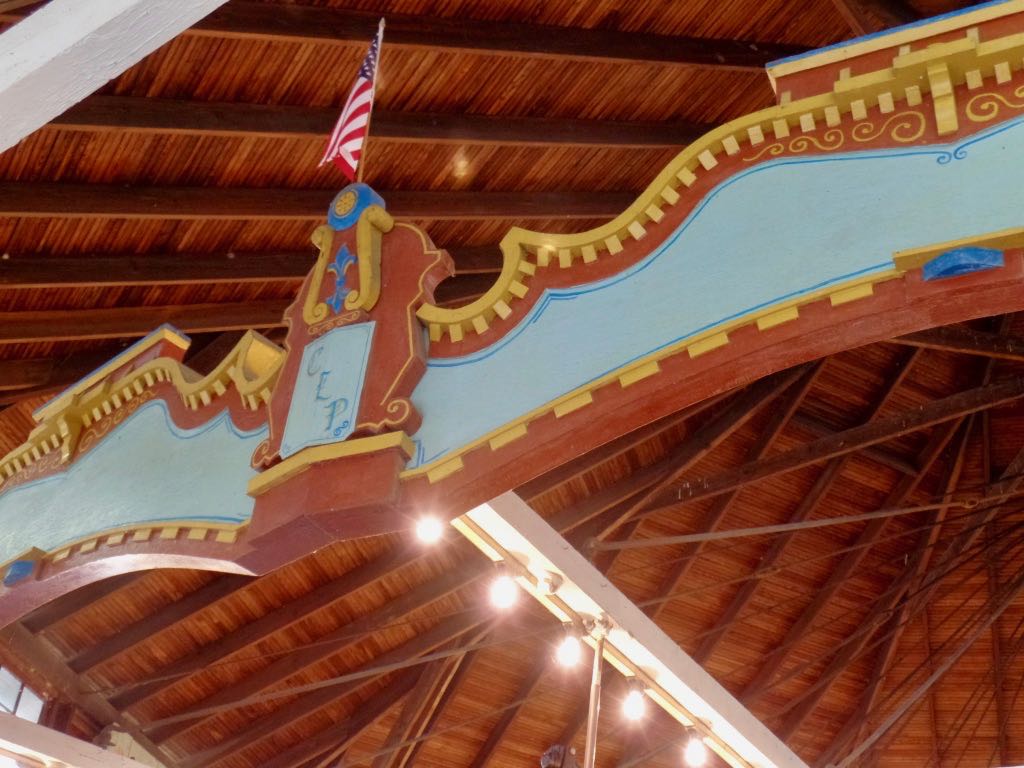 Flag and a CLP shield atop the Conneaut Lake Park carousel. 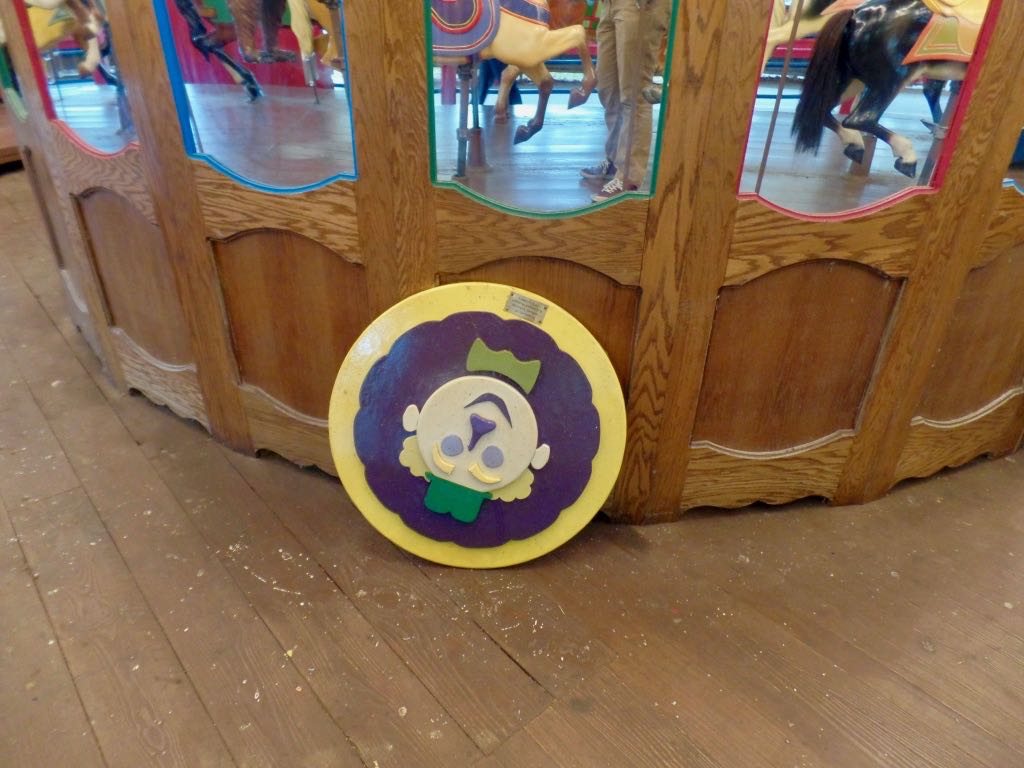 There's several smiling face roundels around the center of the carousel. Of course I took a photo of the one that had been taken down for whatever reason. I didn't get pictures of just what the labels are. I think they were names of peple connected with the park and its history suggesting that these are loose caricatures of park-important figures. 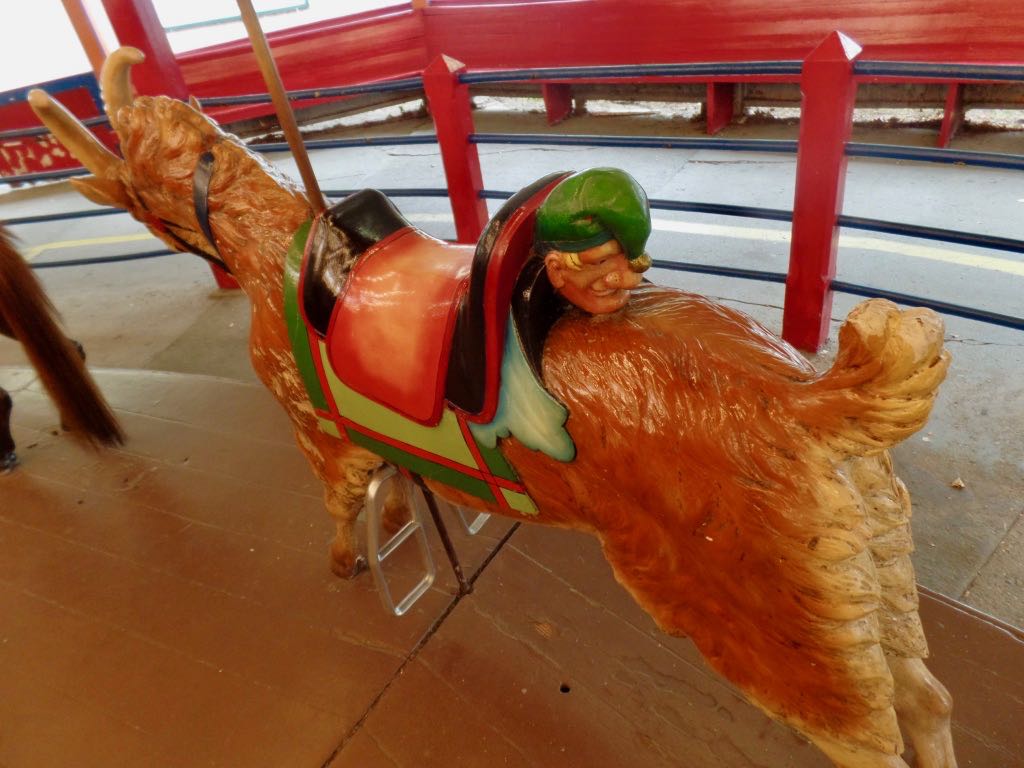 Conneaut Lake Park carousel goat, as seen from the inside. I'm not sure what the little lead at the back of the saddle is supposed to mean.