With New Year's Day the 2018 competitive pinball season officially ended. There'd be a couple days while the backlog of event results were entered, so we couldn't know precisely what would happen. But I was feeling good. I'd been in 16th place, but I had several strong finishes in that last week and figured that would be just enough to lift me to 15th. And

bunny_hugger was in 24th, with poorer last -week finishes, but it should be enough to keep her ahead of TG.

And there had been some drama. After the announcement of the Fremont site for the state championship, AJG declared he was Done with competitive pinball. And told everyone he had finished. His anticipated outcry of people wanting him to come back didn't arrive. This may be because everyone would rather have this too-tough competitor out, by fair means or fowl. Perhaps because he's one of the social leaders of the eastside players, and less known (and liked) on the westside.

GRV also declared he wasn't going to play, possibly because the Fremont facility would not be up to his standards; bear in mind, the pinball machine that most recently came off the factory line at Stern headquarters is not up to his standards. But also possibly because he's advocated this weird conspiracy theory that alleges some kind of malfeasance on the part of AJH and PH in the tournaments they run out in Fremont. Nobody knows what it's supposed to be, exactly. The head of the IFPA said GRV had presented his evidence and declared it a ``nothingburger'', his words.

Over the last few weeks GRV made up spreadsheets showing projected first-round matchups. This under various conditions of who would play and who wouldn't. And rankings (and matchups) under other assumptions, like, what if the IFPA ruled that only a certain number of events at any one venue counted. If only five events at one venue counted,

bunny_hugger jumps up several positions in the standings and I jump up one. If only three events at any one venue count, she jumps up even higher. This all reflects a weird ongoing bit of Michigan pinball drama where there's a couple people who think certain figures are overrated, getting their standings because they play so much they can't help but get lucky some. (This sort of complaining is why for this year only the 20 best-rated events of the year count, rather than everything played.) And ... you know, it's hard not to notice the people most often complained about as ``overrated'' are

bunny_hugger and KEC, the two highest-rated women in the state. Like, nobody complains about me being overrated, even though my average play, and finishes, are only barely better than

bunny_hugger. I'm usually rated higher than her, yes, but that amounts historically to I have one high-value finish in a big event each year and she doesn't.

The deadline for accepting, or declining, invitations to the state championship came nearer. Some medium-valued people who'd declared they weren't coming earlier officially declined. AJG ... did not. GRV insisted that AJG would bow out, to the point of declaring that he would unfriend AJG on Facebook if he did. A couple people placed bets on AJG's decision, to my amazement. I figured under no circumstances would AJG bow out. He's too likely to win, after all. And this year for the first time there's a large amount of money due the winner.

Finally, though, the decision day came. GRV either formally declined or let the deadline pass, declining by default. AJG accepted his invitation. Incidentally, knocking KEC out; if one more person had not attended, she would have been in as the bottommost seed, after absences. She's the top alternate instead.

And my final standing? With that strong final week I crawled out just ahead of MAT, a stalwart at Chesterfield and who had gotten barely a third of a point ahead of me by the end of the year. But I was not in fifteenth place. JEK, a Fremont stalwart, had won the final Fremont monthly tournament, and earned 16.72 points in the IFPA standing, leaping him up six or seven places and ahead of me. That lousy third-round monthly finish, and my lousy standing in the league final, made my whole strong December a Red Queen's Race of finishing right where I'd started. ... But, then, if I hadn't played, and played so well, I'd have drooped possibly to 20th or so. Still in, but I wouldn't be the high seed going in the first round.

bunny_hugger? ... Well, she held out, above TG, whose solid finish New Year's Eve still left him about two points behind her. But RHY, another of the Fremont stalwarts, had finished in third place in that monthly tournament that JEK won. This brought him enough points to overtake

bunny_hugger. She was knocked down to 25th place.

She would still be in the finals, yes. Five people above her were not attending. But she had wanted to be in on her own merits, for safety's sake, and to quell any eastside grumbling about her somehow 'not deserving' her place in finals. So this was a disheartening start to the year.

It could have been worse. With the people currently slated to attend, first round, I'll face DAD, and she'll face JEK. Not matches either of us are happy with. But had AJG and one other person who took forever to accept not attended after all, our first-round matches would be against each other. Not a fun prospect. I did give her my best advice on how to beat me, on the tables there. She said something about my asking to be tossed into a briar patch. I can't imagine why.

So that's where things stand for what we expect to do this Saturday, in Fremont. A spot on the western end of the state. A place with not much in the way of hotel space. A place at the end of many tiny, minor roads. There's snow forecast for Saturday. More snow forecast for Lansing, which most every eastsider will have to drive through. I don't know how many people are thinking they'll drive in the day of. I don't know how much to trust a forecast this far out. Still. Could be an exciting day.

Trivia: In 1922 Fox studio's newsreel division released a special feature, Face To Face With Japan, studying the question of whether war threatened between Japan and the United States. Source: The American Newsreel 1911 - 1967, Raymond Fielding. (I don't know what verdict the series reached.) 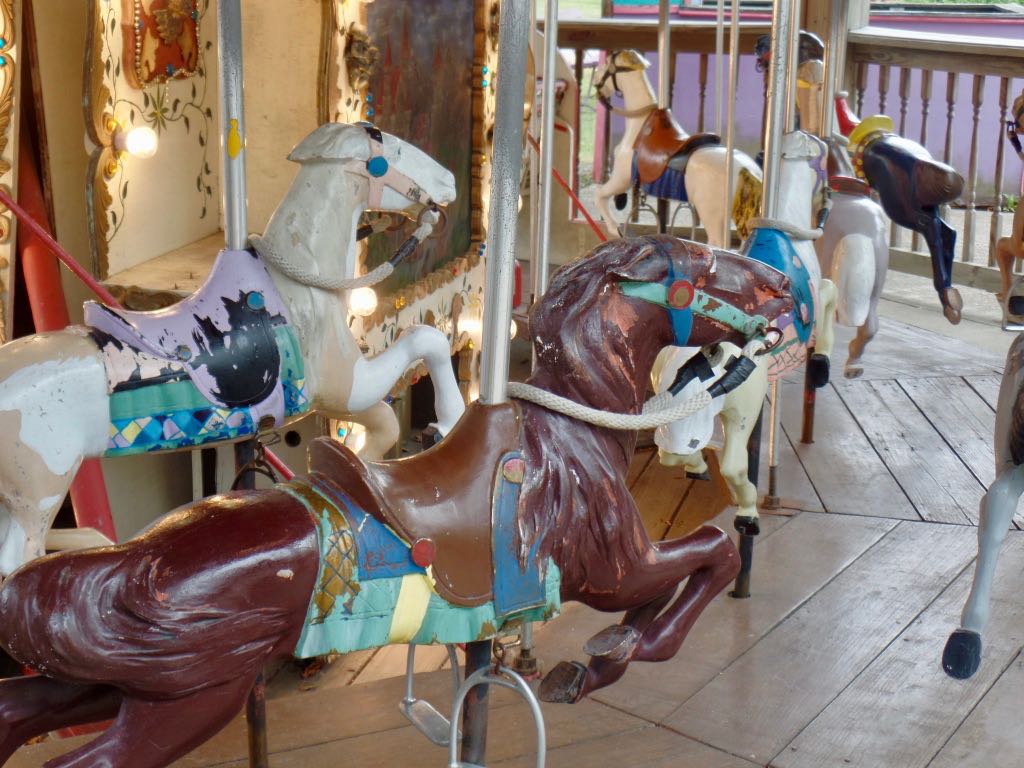 Some of the well-used mounts on the Kiddieland carousel at Conneaut Lake Park. 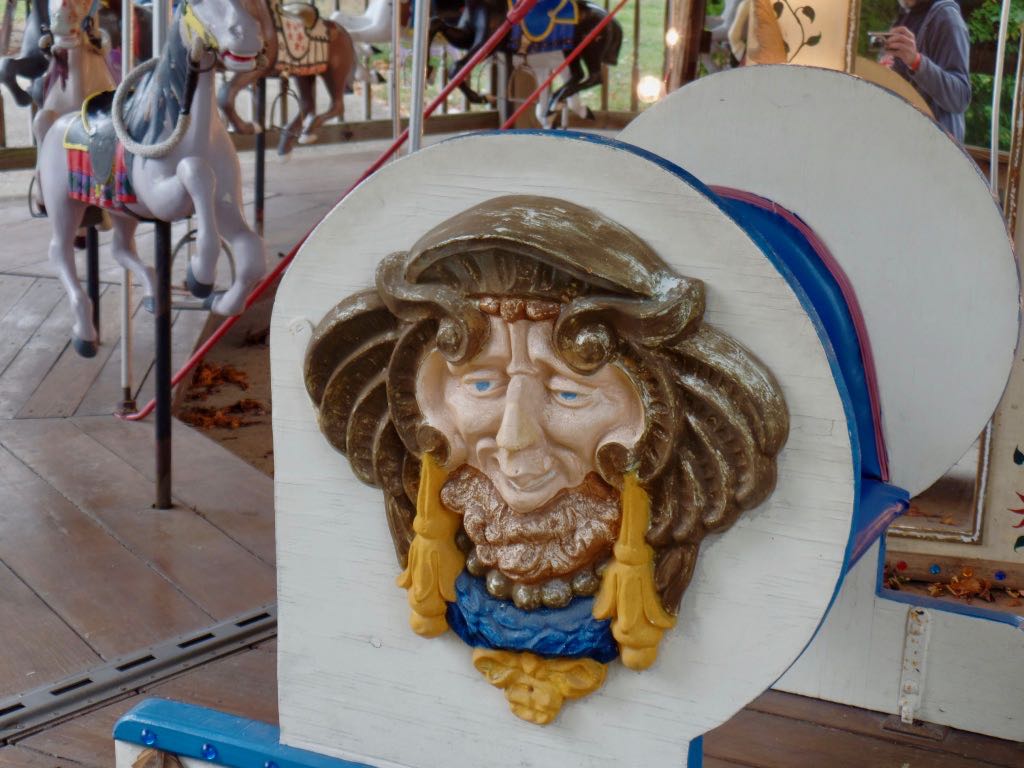 The richly-detailed head on the chariot for the Conneaut Lake Park Kiddieland carousel. 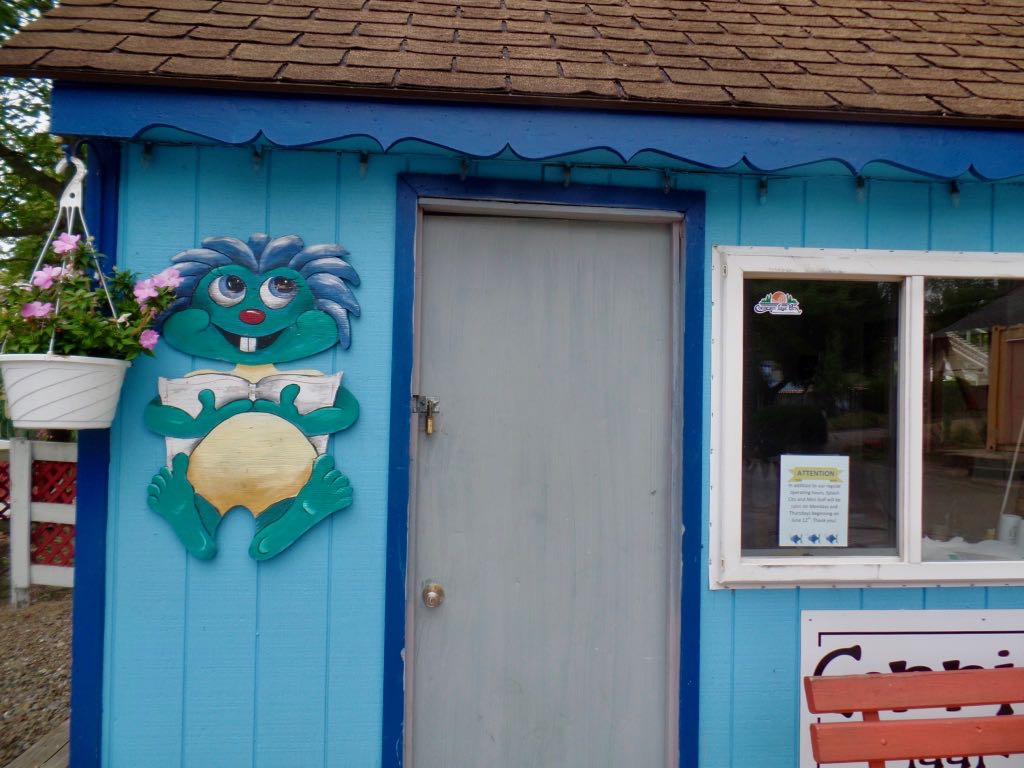 Staff building in the Kiddieland area, sporting an animal figure that I keep thinking looks like a something, but that I can't place. If it is a character I should recognize please let me know. I'm mildly distracted by it.