After a couple glamor shots with our $38 we stowed our winnings away. What to do after that? Not play pinball, for one. There were games available, yes. But the chance of interrupting someone else's game was dire. I'd done that, in a moment of stupidity, at the Baby Food Festival over summer. And during the pin-golf tournament the night before someone reset a nearly-complete Jurassic Park game, costing

bunny_hugger an all-but-sure win over PH and some other great players. She managed, but was not happy about it. But there's other reasons, too. Each game you play is a chance to break a game, and nobody wants to force PH and AJH --- who might well make finals --- to interrupt their play to deal with an unnecessary game malfunction. Or spoil someone's first pick for a game when there's hundreds of dollars on the line.

But there were things to do. Talking with other eliminated players, for example. Or with our friends who were still in the running. Telling people where we got the popcorn. (That convenience store we got lunch from was giving away bags of popcorn with each fountain soda purchase, part of National Popcorn Day.) Or eating a lot of, honestly, junk food, but it was free so who were we to even slow down inhaling bags of Fritos? We had also got a bag of Combos from the convenience store. I shall now explain why this is a correctly-formed joke and therefore funny: a string of major shots collected in rapid succession is known as a ``combo'' and in modern pinball games is usually quite valuable.

Another activity was watching TV: the Special When Lit venue got a flat-screen TV installed for the finals, and they were using it to show the streaming of high-level pinball tournaments of last year. One of the tournaments had an Eight Ball in it, twin to the SWL's machine, and that never stopped distracting me. Also distracting: that the players --- none of whom from Michigan --- had the same body language any of us do. There was reliable fun to be had talking about these far-better players, sometimes making the same dumb mistakes we mortals make.

The march of finalists. MWS defeats JEK, finally satisfying my family's honor. AJH --- who would have beaten me if I had made it through the first round --- beats past, two-time, state champion AJR. MJV, who stole first place in a Chesterfield pinball tournament from

bunny_hugger by one lucky bounce of one extra ball, knocks out our tournament director PH. CST beats him out, though. All up the Cinderella competitors have been beaten now; the final four are CST and MWS, AJH and AJG, a quartet that makes sense.

AJG is another two-time state winner and if it seems to you that people with A- names have won Michigan a lot, yeah. In the modern era of the International Flipper Pinball Association, 2014-present, the winners have been AJR twice, AJG twice, and ADM. We have no explanation for this phenomenon. The sense I have is the room was pulling for AJH. AJG is an eastside player; more of who's left are westsiders. AJG has declared his retirement from competitive pinball many times over, and walked each one back. He had said last year he was out, then came back to a Beatles launch party on the grounds that he just wasn't doing serious tournaments. Then to BIL's Basement Tournament for reasons I never got. Now he's backed that off to ``no IFPA Circuit events''. And,

bunny_hugger quipped about this, ``no sleeping in a bed with sheets''. It's a tough match. AJG has an almost supernatural ability to aim the ball exactly where he wants to go. And he has actually supernatural abilities to find rules exploits. He's found bizarre combinations of shots on many games, some of them so pronounced that pinball makers updated the rules to disallow them. (Maybe unfairly; if it takes you doing twenty skilled things to get at the exploit, is that really an exploit? You've put in a lot of work.) But this is AJH's home ground. It's his games.

The other semifinals is CST versus MWS. We have split loyalties. MWS is such a good friend of ours. CST, though ... he's really good. We like him a lot. He's never won the state championship despite five years of coordinating IFPA events in the state, and being good enough for it. And, sometimes, under incredibly distracting conditions: this isn't the first time he's played at finals despite being on-call for veterinary work. It really feels like he deserves the first-place finish. I suppose we end up rooting for whoever's behind. With three losses MWS picks 4 Square, a game that's tormented him repeatedly every time he's played it. But he needs the leveling influence of the older games.

4 Square is of the older kind of single-player, five-ball electromechanical game. It hews to an old-fashioned rule about tilts. They do not disqualify a player --- tilting never does; nudging a machine is part of the strategy of pinball --- but they don't just end your ball. 4 Square awards no bonus, so there's no penalty in points if you do tilt. To deter players, then, it gives a harsher sanction. The tilt ends your game. There's still no reason not to nudge the machine wildly on ball five, since if you're about to lose the ball anyway it's not like you're going to lose game time or points. But on earlier balls?

MWS has barely started ball one when the game gets too near the outlane. He gives it a shove on the left-hand side. The tilt sensor is on the left-hand side, near the front of the machine. (This is why you can usually nudge a pinball table harder on the right-hand side than the left, and near the back rather than up front.) He doesn't think it's much. The game does. He tilts, ball one. He's ruined. To add to the humiliation, CST has to step up and play. He plunges the ball, and plays for the few seconds it takes to officially beat MWS's score. The finals will be CST versus AJH.

(MWS and AJG play off for third and fourth place. AJG takes third. He goes home, whenever it was he did vanish, with a $380 payout; MWS in fourth place takes a meager $228.)

Whoever wins, besides having first claim on representing Michigan in the North American championship, will take home $1,063.00. Whoever's in second, has dibs if the first-place finisher doesn't want to go to Las Vegas. And he takes home $608.00. CST and AJH agree to split the prize pool evenly, so they can just play without money spoiling anything.

CST's first pick: Congo. It's based on the mid-90s movie we've heard is too awful to watch for even ironic fun. The game's one of that ``pinflation'' era of games with Brobdingnagian scores. Both earn nearly a billion points; CST, just under, AJH just above. CST's second pick: Firepower. CST has a good game; AJH has my kind of game on it. They're 1-1. Their next game: Johnny Mnemonic. Another mid-90s-movie turned into a pinflated-score game. It's one

bunny_hugger and I love; it was one of the five that the Lansing Pinball League started with, although the game's long been gone from there. (It's recently reappeared, at a bowling alley near where we buy vegetables, so we're looking forward to that old friend again.) We like it so, although Johnny hasn't liked

bunny_hugger. In three rounds of pin-golf she didn't have a single decent game of it.

Johnny Mnemonic has a couple weaknesses as a game. You can start a mode named Spinner Millions, getting ten million points a shot. And get that awarded again in your bonus. And if you get the Bonus Hold award, you get that again next ball. Only moreso: a bug in the code doubles the Spinner Millions bonus your next ball, and possibly even after that. AJH has a killer first ball, getting Spinner Millions going and the Bonus Hold. And he has Spinner Millions going through several multiballs, and big chances to hit the spinner target. By the end of ball two, AJH has 22 billion points, a staggering total even for this game. CST has had two lousy balls, sitting at about 49 million, and declares ``I'm comin' for you!'' He's being absurd; there's not even much sense trying after that, although he does. AJH wins the game with 35 billion points.

They go to Shrek, and both put up normal, mortal games, ones that I've beaten that weekend alone. AJH has the better game, 20 million to 12.5 million. He's up three games to one. CST goes to 4 Square. There he has the kind of game I'm capable of, scoring 4,879. AJH has the kind of game I was putting up all day, scoring 2,595. It's two games to three. AJH picks Lethal Weapon 3, which seems funny, somehow.

Both have a tough time first ball. Both recover, though. CST puts up 69 million points, a score low but not catastrophically low. AJH puts up 167 million, high but not extraordinarily high. CST congratulates AJH.

AJH is giddy with delight. CST doesn't look unhappy either. He won't be going to Las Vegas to represent Michigan, though, barring something catastrophic. AJH is so thrilled with the prospect he might just teleport to the North America championship.

It's just before 9 pm. After eight hours, the state championship is finally done.

Trivia: In the runup to the first space shuttle launch NASA engineers discussed putting together a repair kit which would allow astronauts to replace up to sixty of the Thermal Protection System tiles on orbit. They concluded that if they thought a repair kit were needed, then they should not launch. Source: A History of the Kennedy Space Center, Kenneth Lipartito, Orville R Butler. 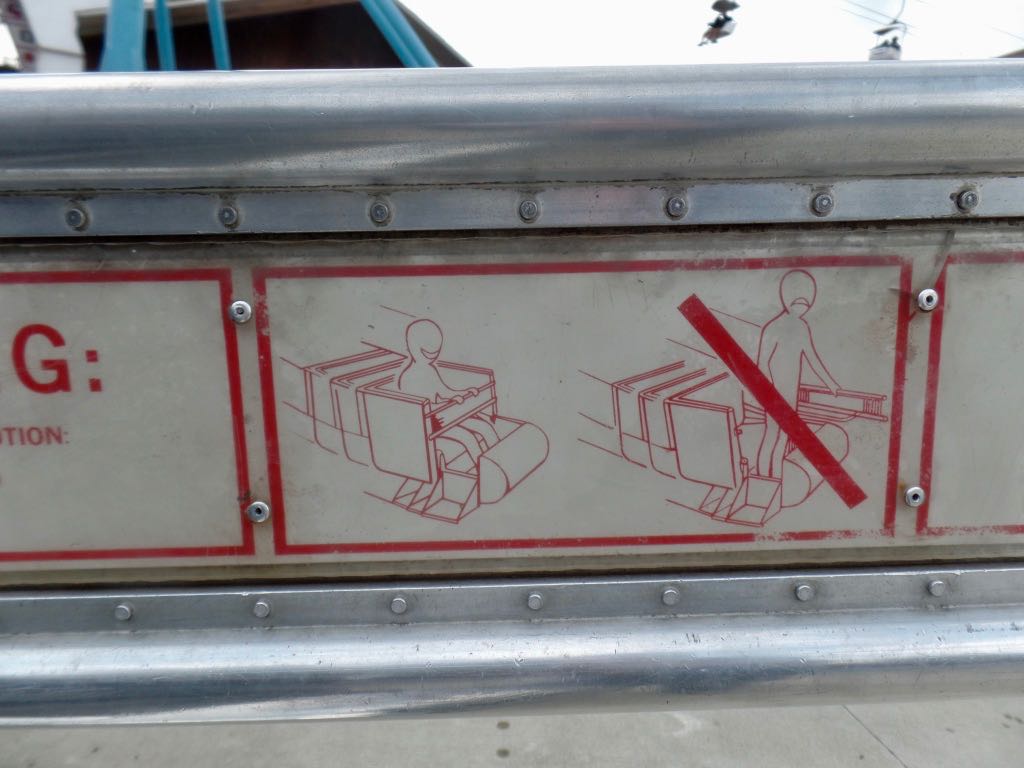 Wonderful old-fashioned warning label on the restraint bar of Waldameer's Scrambler: a stern warning about how to ride while faceless. 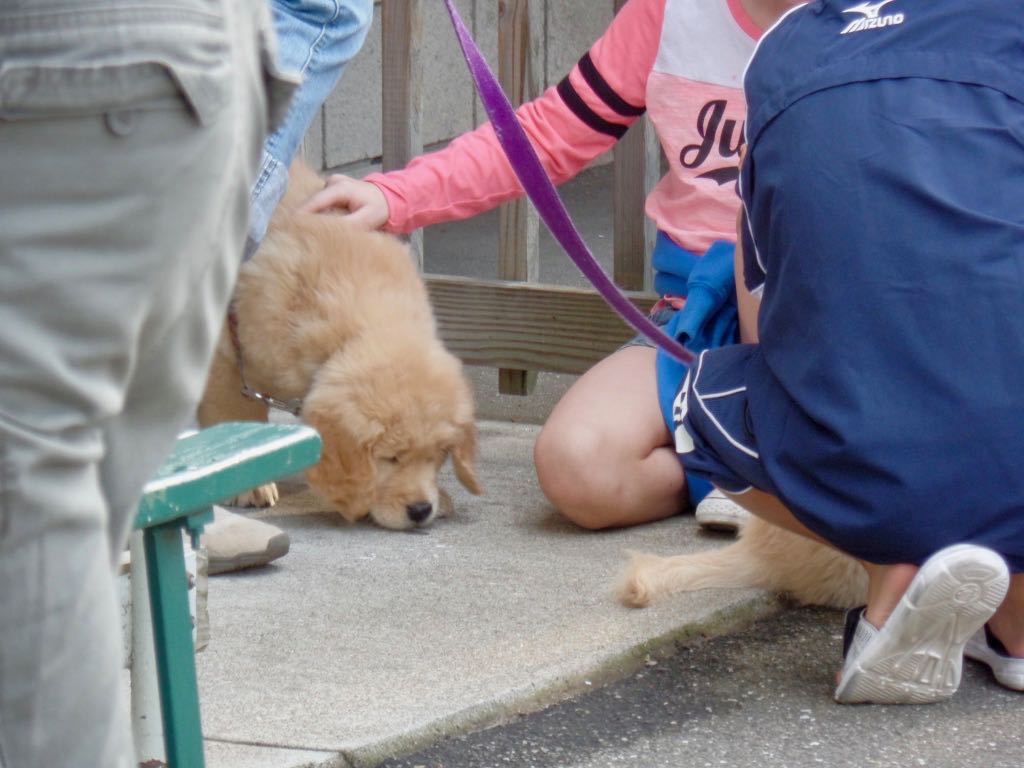 Doggos! Waldameer is, as mentioned, a park you can just bring dogs to, and sometimes people do. 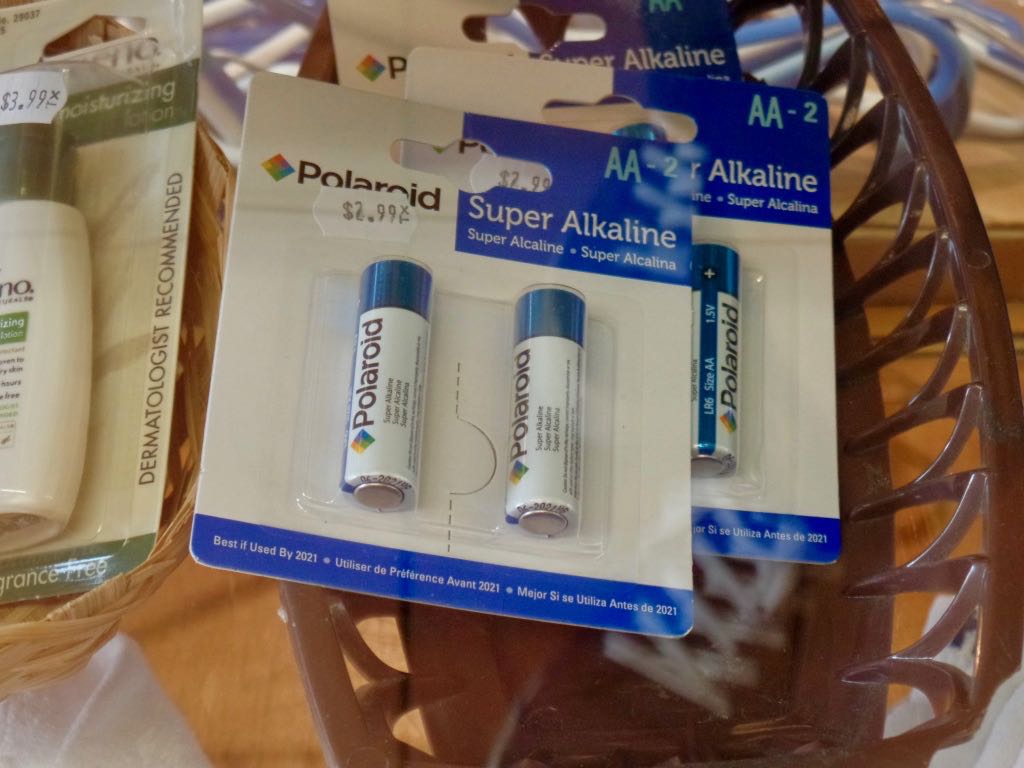