I was the first of our quartet awake Sunday morning. There wasn't much snow, yet. Just bitter cold. I went to the bathroom, washed my hands, and ... could not get any hot water. Cold water was fine, but no hot. Nor from the sink, nor the shower. I poked around, finding the hot water heater and realizing it was a good 67 gallons. The hot-water pipe had frozen. Not the cold, somehow. This is surely because it was three degrees Fahrenheit outside. I warned people as they woke, so nobody got a bitterly cold shower.

bunny_hugger texted the homeowner, warning about the hazard. The homeowner was abashed and swore such a thing had never happened before. At least not when the thermostat was left on at least 55 degrees. Perhaps, but given that the place had no basement and was right on the lake and it was well below zero degrees ... well, it'd be surprising if this never happened before. It's not as though we were upset, except at ourselves, for not thinking to leave something dripping overnight.

We finished cleaning things up and getting them secured.

bunny_hugger and I continued our discussion attempting to explain what Johnny Mnemonic should have explained and failed to. That we were still putting good brain effort into this movie startled and possibly offended BIL. But then he did ask

bunny_hugger ``What are you doing?'', and she failed to recognize the cue as one from the pinball game, that so delighted us when we saw the movie the night before.

We did suggest everyone going somewhere for lunch. (The previous night AJH had suggested we could all go to the Blind Squirrel Tavern, put in some games, and let everyone hammered until 2 am when I could drive home. I don't actually abstain from drinking, but I've got such a reputation that people can't imagine that I don't.) But BIL needed to get home, and MWS felt like it too, possibly because he hadn't showered. He would go home, rest a while, and then go out to Trivia Night with his family.

We went to the convenience store for lunch again. This time, waiting long enough for a grilled sandwich for me, and for the person working the deli counter to learn how to make a grilled vegetarian hoagie.

bunny_hugger didn't get a sandwich, favoring cheese curds instead, which turned out to be cheesey hash browns, which will be good to know for the future.

Our plan was to drive from Fremont straight to

bunny_hugger's parents, who had been taking care of Sunshine since Thursday. We'd had the choice to drive through Lansing, which would be about fifteen minutes longer but would have let us stop at home and maybe shovel the sidewalk, or go directly and worry about the sidewalk later. We tried the direct way and that seemed to take about eight hundred hours to drive. It was, by the clock, only about a half-hour longer than the two-hour Fremont-to-Lansing drive we were used to, but it felt much worse.

We did our best to explain the tournament, and the side tournament, and all the twists of fate to her parents. Also to take a bit of time to shower there, while I tried not to worry about whether our pipes at home froze. Also trying not to worry about their backup hard drive, which suffered an unexplained failure and which we have not been able to get back to working. This is just the one that does Time Capsule logging, but still. You want to have some backups.

And the evening was our first chance to try playing the Mice and Mystics: Downwood Tales set. This is an expansion of the Mice and Mystics game, with a bunch of new tiles and characters and enemies and a completely different set of objectives. I admit feeling intimidated by it; I'd just started to feel like I had some idea what the goals were of the original game and the first minor expansion. This first time through ... mm. Well, we started out in such good order, despite two completely new characters and this movement-in-the-trees mechanic that was new to us, that I got to feeling maybe too confident. Right after that point we entered a new room, and catastrophe overtook us, and I think the best we can say is we learned a little bit about how to manage the game. Again. We've been playing it several years now and are still figuring out what we should have been doing all along.

Also while we did not actually spend the whole evening doing this, we spent a little time getting

bunny_hugger's father to look up movies in the Leonard Maltin movie guide which she got him as a present several years ago. The inciting incident was that the movie guide gave Pee-Wee's Big Adventure two and a half stars. Then I went listing movie after movie, surprisingly many of which turned out to get two and a half stars. Her father seemed to think we would be scandalized by Maltin's disapproving review of the Robert Altman Popeye, which we just weren't. This was hardly the whole of the evening; it's just a scene memorable for it.

We didn't have to hurry home early.

bunny_hugger has Monday classes this term, but that next day was Martin Luther King Jr Day, the one holiday she expected to get through her current schedule. We did go home before it was too late, though, the better to get some decent rest after the whole busy weekend.

There was a pinball tournament Monday. The usual weekly one at Chesterfield, way off on the eastern end of Michigan. We normally can't make it, not during the semester, because it'd be impossible for

bunny_hugger to get there after class. We decided, ultimately, not to go. Besides feeling fatigued, it was the finals of their season. We hadn't played any of the regular league nights, so we couldn't play anything but the B Division. And based on our past performances ... either of us could probably take the trophy for B Division, but that would seem needlessly obnoxious to the people who'd actually played the whole season, or some part of the season. There'll be other things we can play as we try to qualify for next year.

Trivia: At the end of his life the companies Thomas Edison still owned were valued at about $12 million. Source: Empires of Light: Edison, Tesla, Westinghouse, and the Race to Electrify the World, Jill Jonnes.

PS: Having some more fun with Waldameer Park! 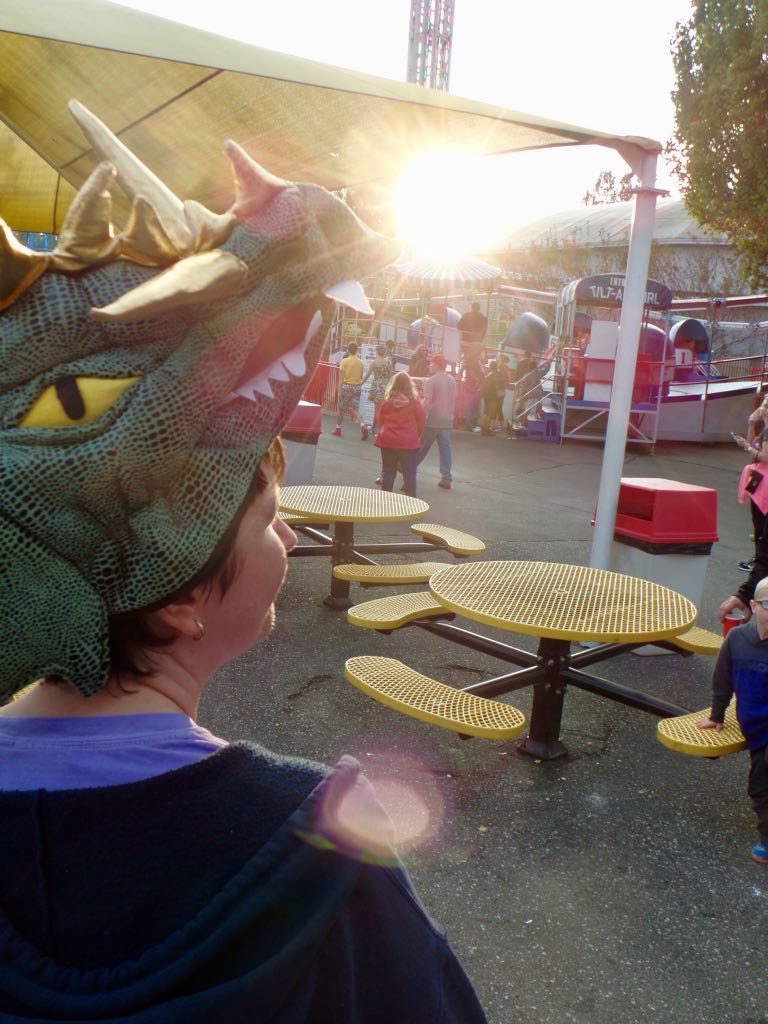 bunny_hugger finds that Dragon Hat really lights up the day! 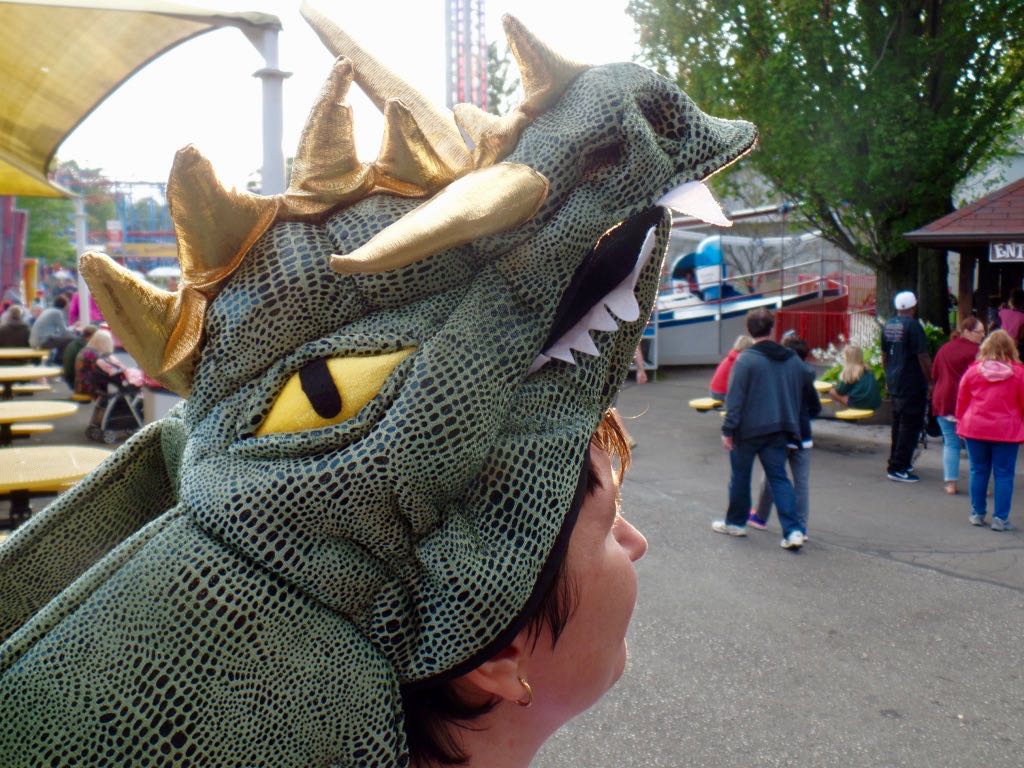 Here the sun was in just the right spot to highlight the outline of Dragon Hat (look at that mouth!) and

bunny_hugger's face. She looks so good. 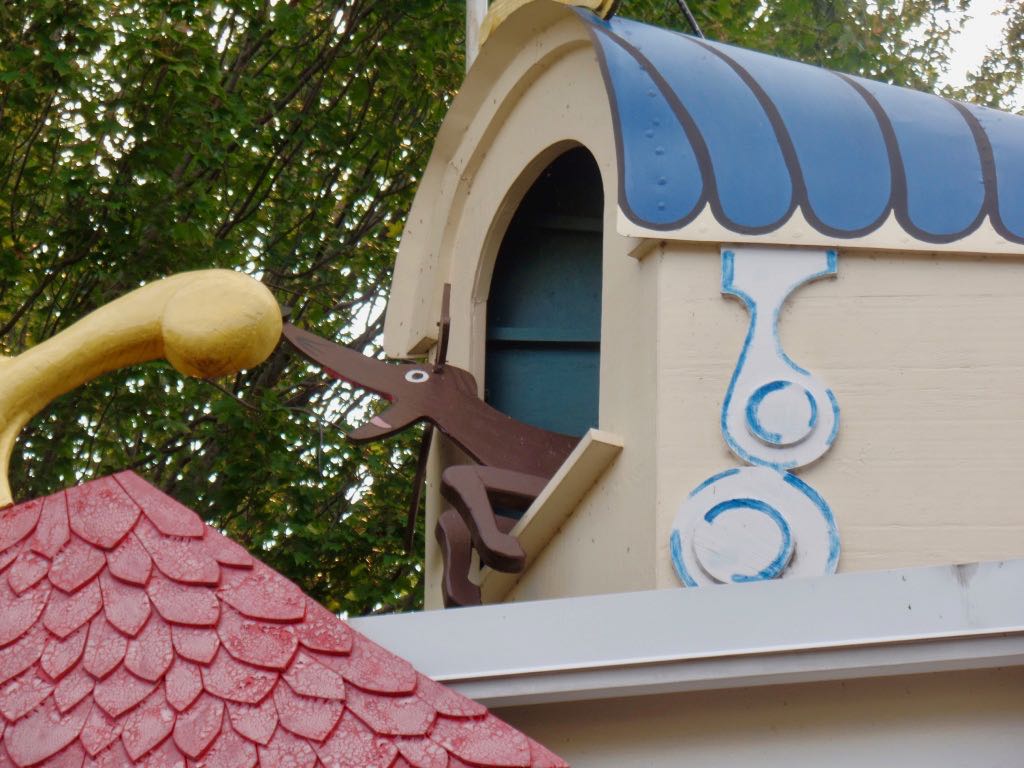 Detail picture of the Whacky Shack. The dog keeps rocking into and out of the dormer window.