So one thing I always like doing in early February is checking in on South Jersey. Specifically to the Cohanzick Zoo, where the 1st of February is Coati Day. In this suspiciously Groundhog Day-like observance, the zoo sets out plates of food marked Winter and Spring, and lets three of their coatis out to see what they get up to. This they've been doing for decades, ever since they noticed early February can be kind of a dull stretch for zoos even in South Jersey, and since they noticed they didn't have groundhogs but did have coatis.

Unfortunately, I can't find a newspaper or local-tv-news writeup of this year's Coati Day. All that I have been able to find is the video that the Cohanzick Zoo posted to their Facebook page. So I'm sorry to not be able to do much more than link to that and let you deal with things. For me, not having Facebook, that amounts to having invitations to log in covering at least one-third of the page and occasionally blockading the whole page.

Anyway, it was a cold and snowy day at the zoo. The zoo reported that the coatis did not want to go out, saying ``Carmela and Margarita refused to participate and demanded to be returned to their toasty warm hammock. Floriemel chose 6 more weeks of winter (we believe out of spite)''. Which is fine and funny as it goes. But their video shows, as Floriemel goes tromping up to get something eat, one of the other coatis prowling around the fence line. All right if that one didn't venture an opinion about the weather, but it is doing more than just demanding to be returned to warmth. Still, tells you something of the weather when you can't get a coati to eat.

Trivia: The 1986 Intelligence Authorization Act required, among other things, that the CIA investigate Panaman President Manuel Noriega for his involvement in drug trafficking, arms smuggling, money laundering, and the murder of Dr Hugo Spadafora, who had done much to bring medicine to poor people. CIA Director William Casey was livid, protesting [ to Jessie Helms, one of the sponsors of the requirement in that act ] that this was ``destroying our policy. There are some things you don't know about, things Noriega is doing for the United States''. Source: Overthrow: America's Century of Regime Change from Hawaii to Iraq, Stephen Kinzer.

PPS: Some more at Waldameer! 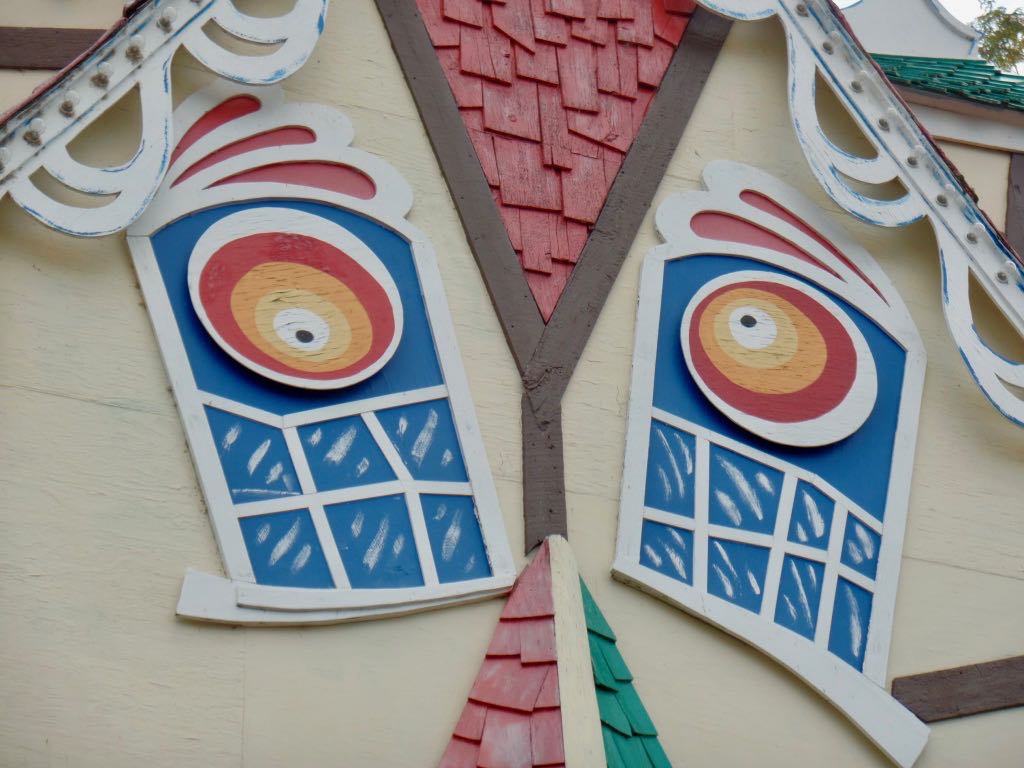 The spinning, uncentered-pupil eyes of the Whacky Shack. There's bits of this which make more sense in animation, but the lines of the windows give you some idea the silly, weird tone of the thing. 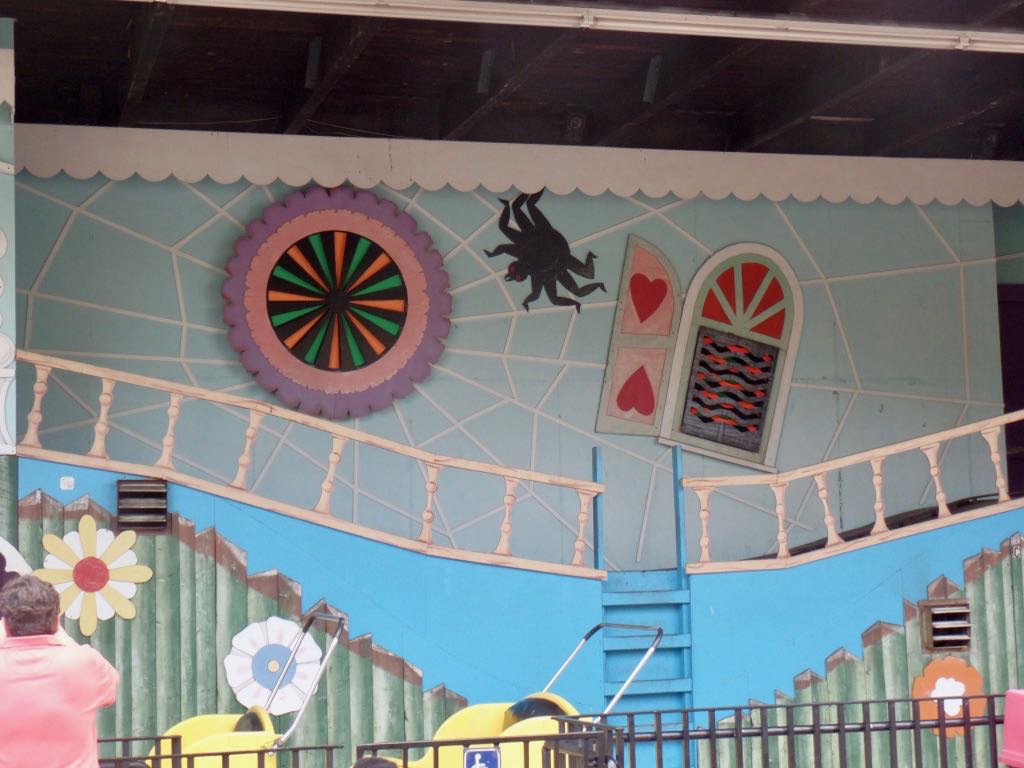 Loading station of the Whacky Shack. Above it is a small hill that the cars drop down and back up again. (This would seem to qualify the Whacky Shack as a roller coaster, the way the Devil's Den at Conneaut Lake Park is, but it's not listed as such on Roller Coaster Database, possibly because nobody there thought about it.) The windows change appearance, the result of rotating or sliding things behind some kind of grate. 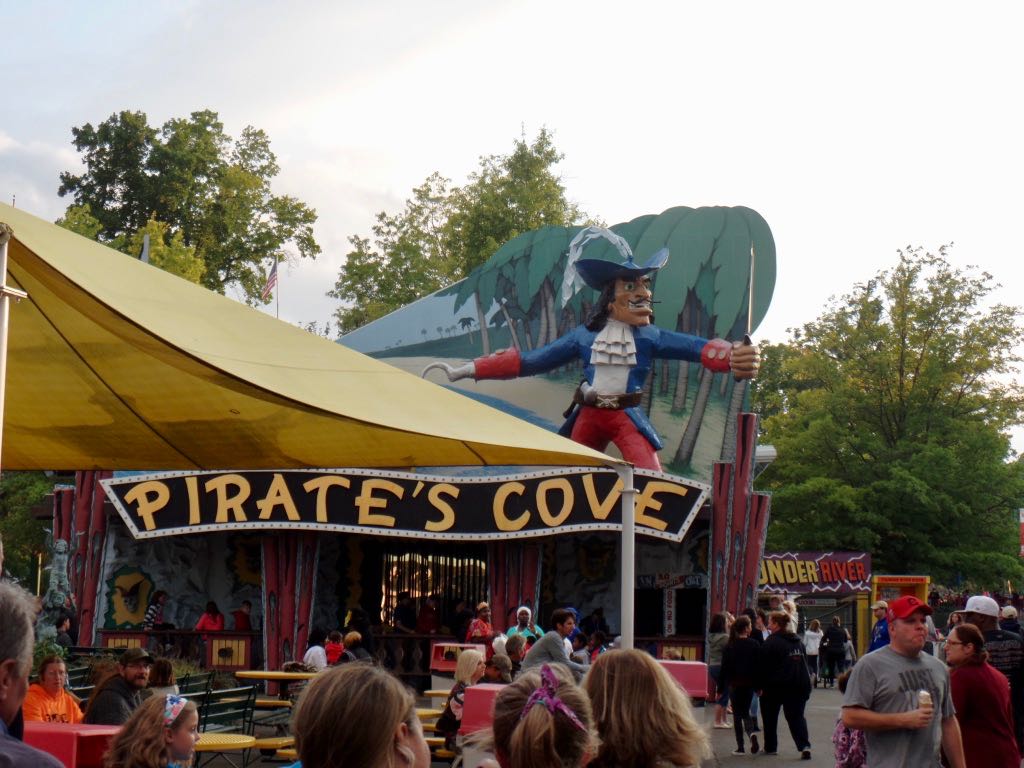 Pirate's Cove, mentioned before, is the other Bill Tracy-designed dark attraction. This one you walk through and can take at your own pace.