March Hare Madness has been, in past years, her springtime charity pinball tournament. The last several years it was an Amazing Race format. In this everybody plays a string of tables, with the lowest-scoring person on each table eliminated until you're down to the finalists. It can be a fun format. It can be a terrible format, as people who've had a lousy game hover near, hoping someone else has an even worse game. And, of course, someone gets knocked out first, and so went to all the trouble of going to the tournament only to lose right away.

bunny_hugger didn't want to run Amazing Race again. For one, the IFPA gives little rating value to this format. (The IFPA considers a whole pinball game to be three balls played; in an Amazing Race format, you can in principle have to play only one ball, so Amazing Race games are rated as one-third.) For another, our venue has raised the price of every pinball game to a dollar. Some of them have a value deal, three games for two dollars, but not all do. It's a bit much to pay a dollar for a game that, if someone else was unlucky, amounts to you plunging the ball and making one good shot. Last year there were enough games still at 50 cents to make this bearable.

bunny_hugger) asked for advice on running one, drew the comment ``You had really better call me''. And a comment later that yeah, that was some great advice in the phone call. Not much on what the advice was, though.

But we could anticipate some problems. I got out the painted trash bin from years of Raccoons and Procyonids SIGs to be the discard pile. We also got some Easter candy, as promised. We picked out twelve of the shortest-playing pinball games at the venue, and made index cards for each of them, the better to draw table names at random. And brought cards for the names of players, in order to draw and order groups at random. And thought of things people might be confused by, which turned into a sheet listing a snappy eighteen rules. We were as ready as could reasonably hope to be.

Which is not to say there was enough time.

bunny_hugger figured to repurpose several trophies DMC had donated, putting hare-themed decorations on them. It was hard finding hare, or rabbit, figurines this year, somehow. (We could find wicker ones, but those won't do for trophy work like this.) Painting was slower than should have been. We had to buy a threaded rod and hacksaw a quarter-inch off of it to reassemble one of the trophies.

bunny_hugger was cursing herself, as she often does, for not having the trophies done before the day of the tournament. It all got a bit tense. And worse, as on Saturday during a visit to the pinball mines of Fremont she realized she was sneezing rather a lot, and her throat felt sore, and she did not have the time to get a cold. Especially since it should reach its worst on Tuesday, the day of the tournament.

But she assembled the trophies, lovely glittery purple ones with rabbits on their tops, and got them photographed in beautiful early-afternoon sun, and we were able to get to the venue about 90 minutes ahead of the start of the tournament. Like, just as we would hope to do.

Trivia: Glass for the House of Representatives' chamber in the Capitol was ordered from Germany in 1805. When by January 1807 it had not arrived, a substitute supplier in England was hired. The glass arrived in August 1807, weeks before the Embargo Act against England was called for. Source: Washington Burning: How a Frenchman's Vision for Our Nation's Capitol Survived Congress, the Founding Fathers, and the InvadingBritish Army, Les Standiford.

PS: Not quite at the Silver Bells In The City electric light parade yet, but I've nearly left the City Market. That's something. 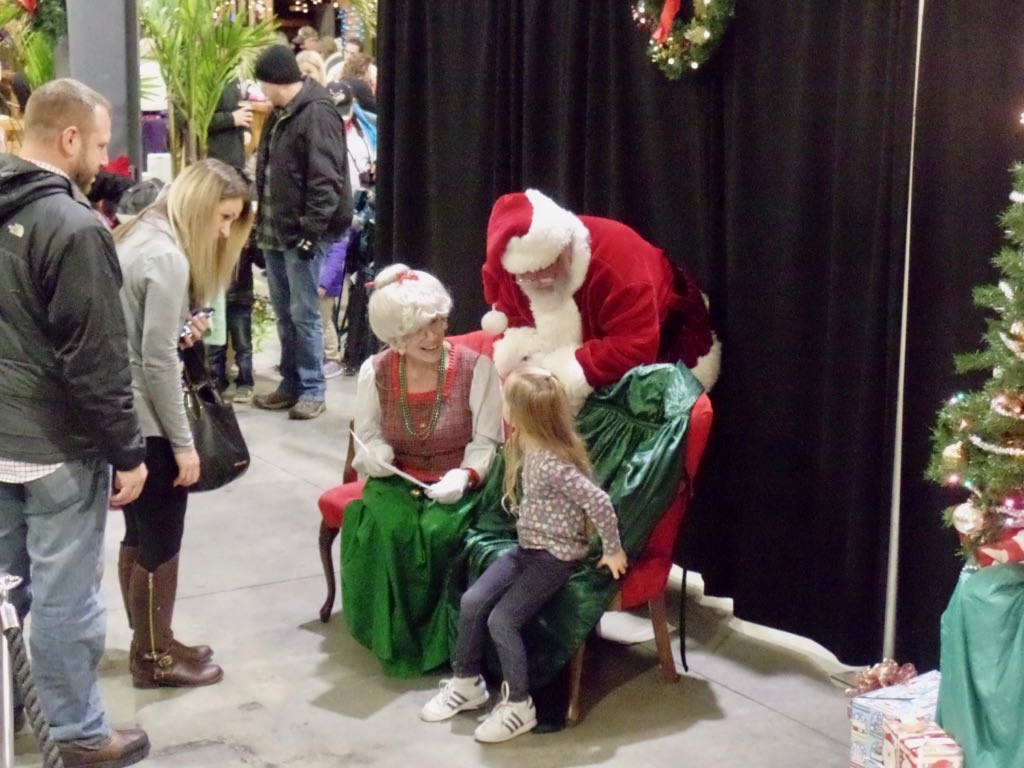 Mrs and Mr Claus looking over something with one of the kids. 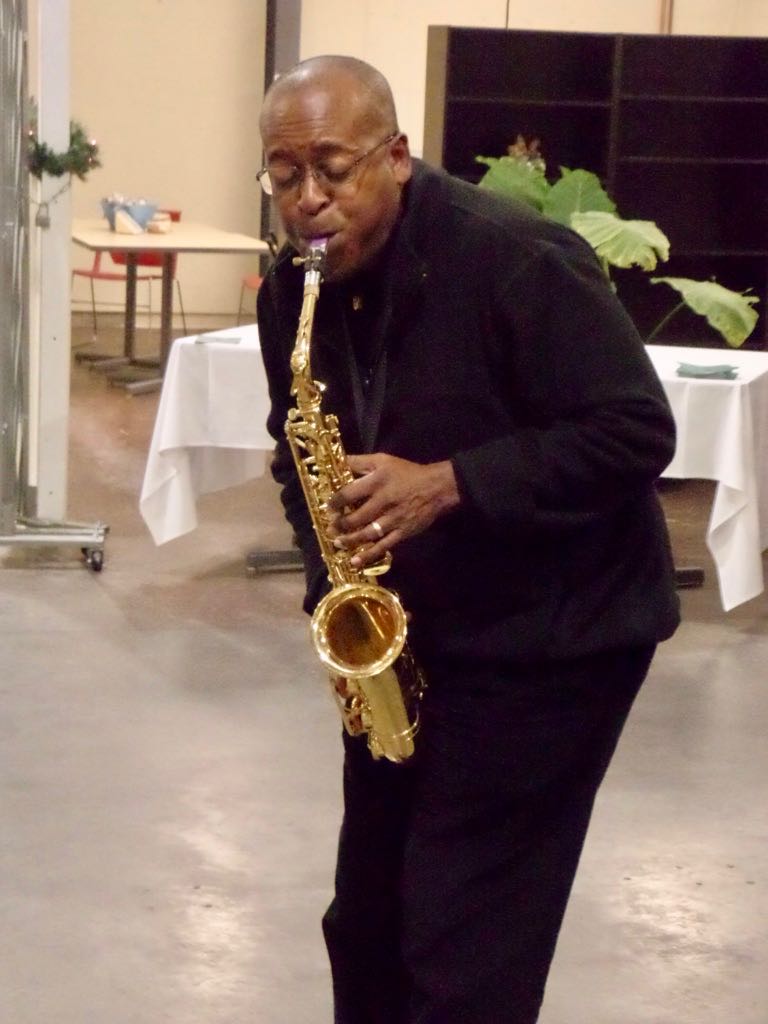 And one of those musicians you just naturally get at markets like this. 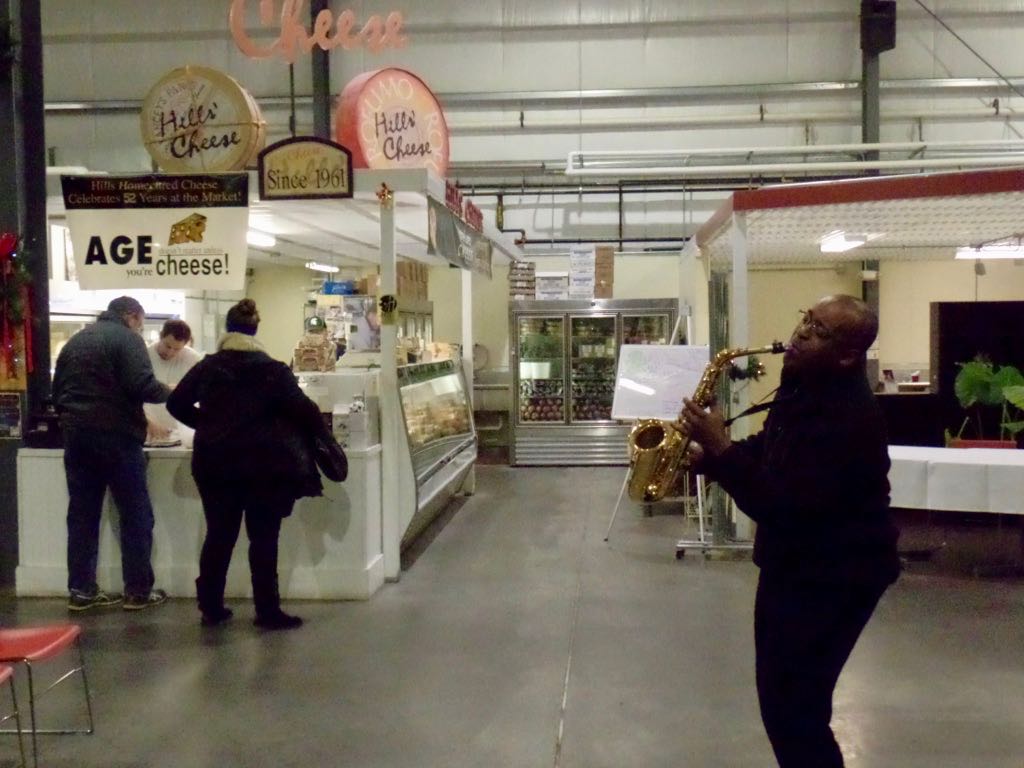 Kind of a cheesey music, though. ... Hills' Cheese was one of the two longest-running stores in the City Market. Their leaving was, I think, when I realized that the City Market as we knew it was doomed. The place closed a few months after Hills' left. (Hills' still exists, last I checked, but their home location is like Flint or something so we're not going to be able to pop in so easily anymore.)