And story strips? I got story strip plot summaries. What's Going On In Mary Worth? How can you scam a Mary Worth character? Learn answers to these questions and more! Thanks.

The day after Thanksgiving, 2017, we went to the Black Friday charity fundraiser at the VFW Ann Arbor Pinball Hall of Museum or whatever its name is. So here's a bunch of pictures of pinball machines, the theme that just never stops giving shots that all look like they really should be a little better than they are. 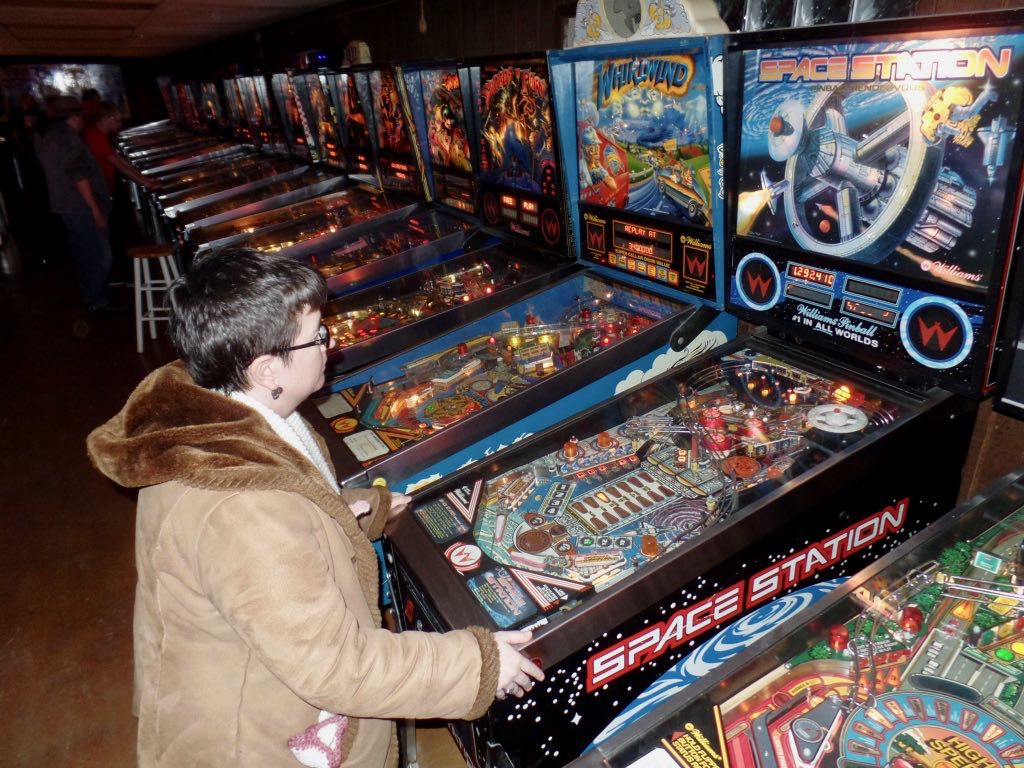 bunny_hugger, too busy even to take her coat off, because she wants to get on the high score table for Space Station. The game has what she considers to be the best high-score entry music of all pinball, and that is quite the standard to meet. 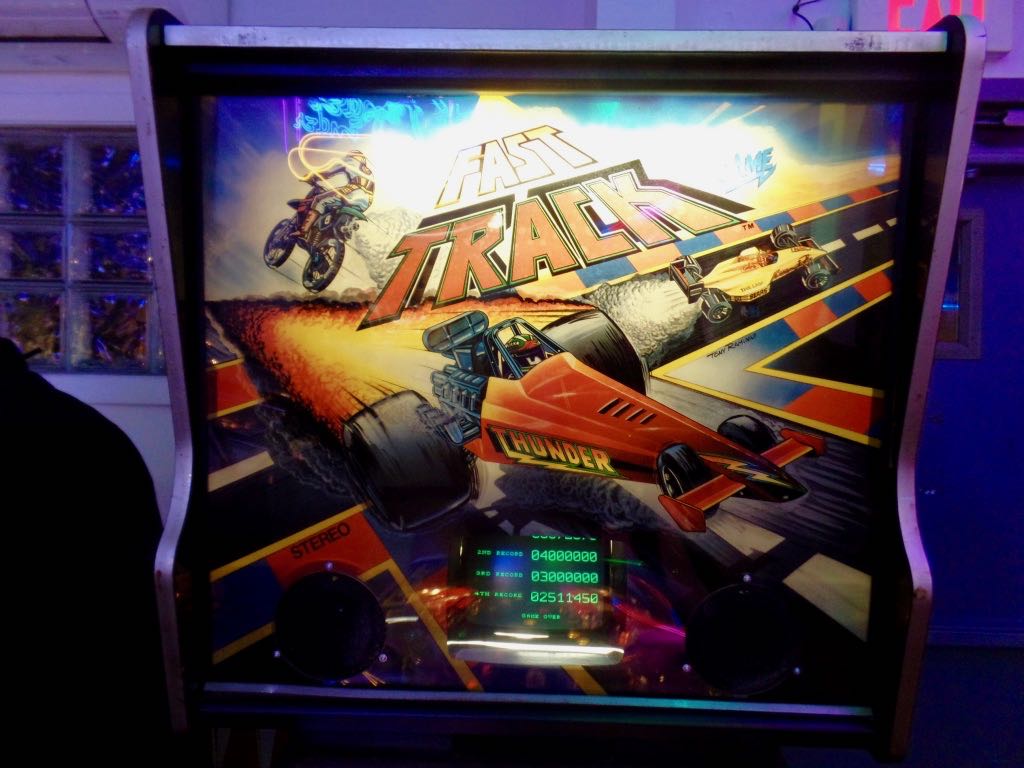 LCD screens have in the last couple years become the standard score screen for pinball games. But nothing is ever the first of anything. Here's Fast Track. made around 1989 (a version of 'Motor Show') and featuring an actual computer screen for the time. The high scores are on display here. 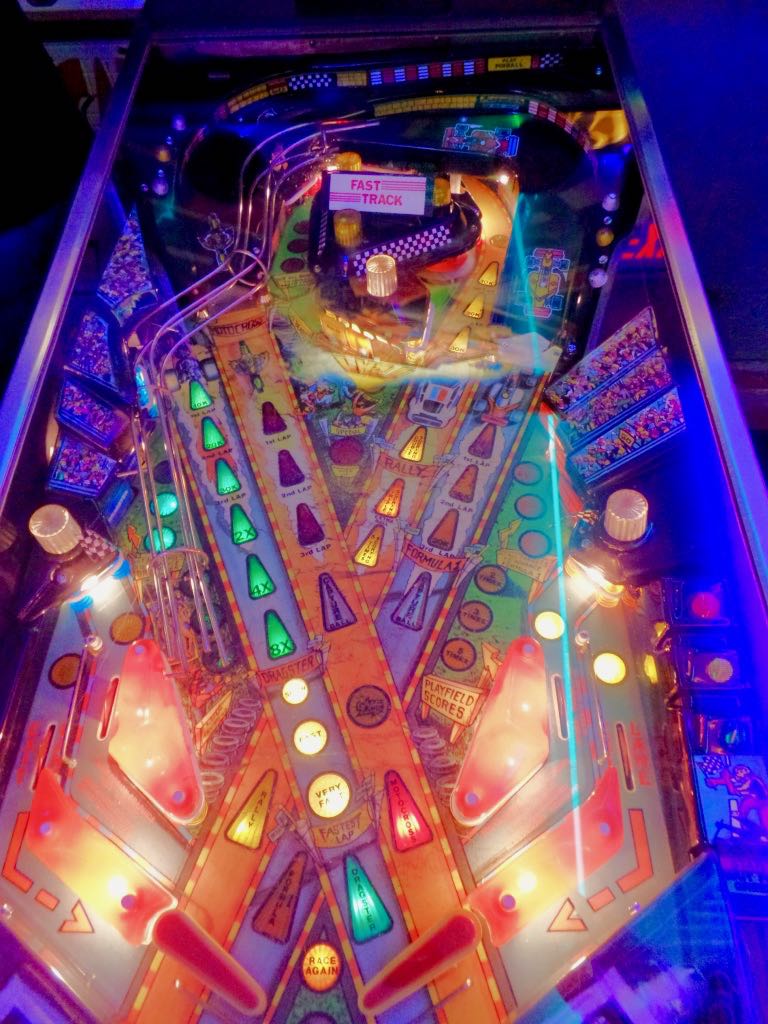 The playfield for Fast Track, which seems like it should be reasonably fun if I could figure out any of the shots. But notice how the game sets up features near the flippers that should help you learn where the ball should be to reach any of the major targets. 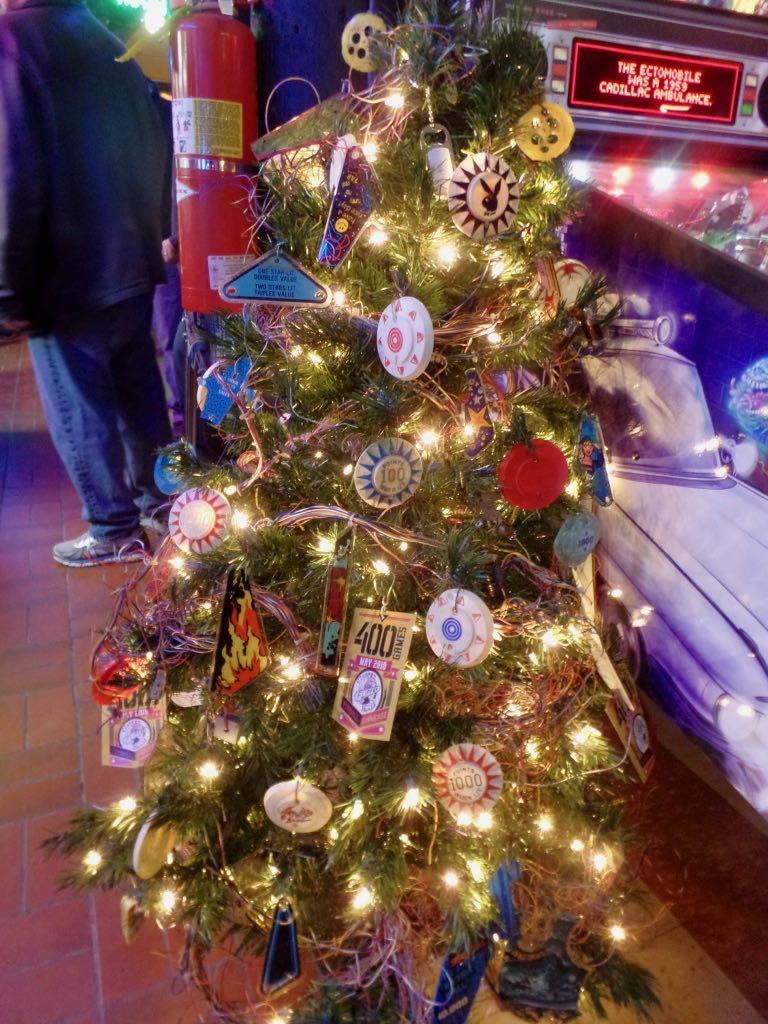 Pinball-ornament Christmas tree set up at the VFW Ann Arbor Pinball Museum Hall of Fame thing. Some of those are bumpers such as might have been on games. 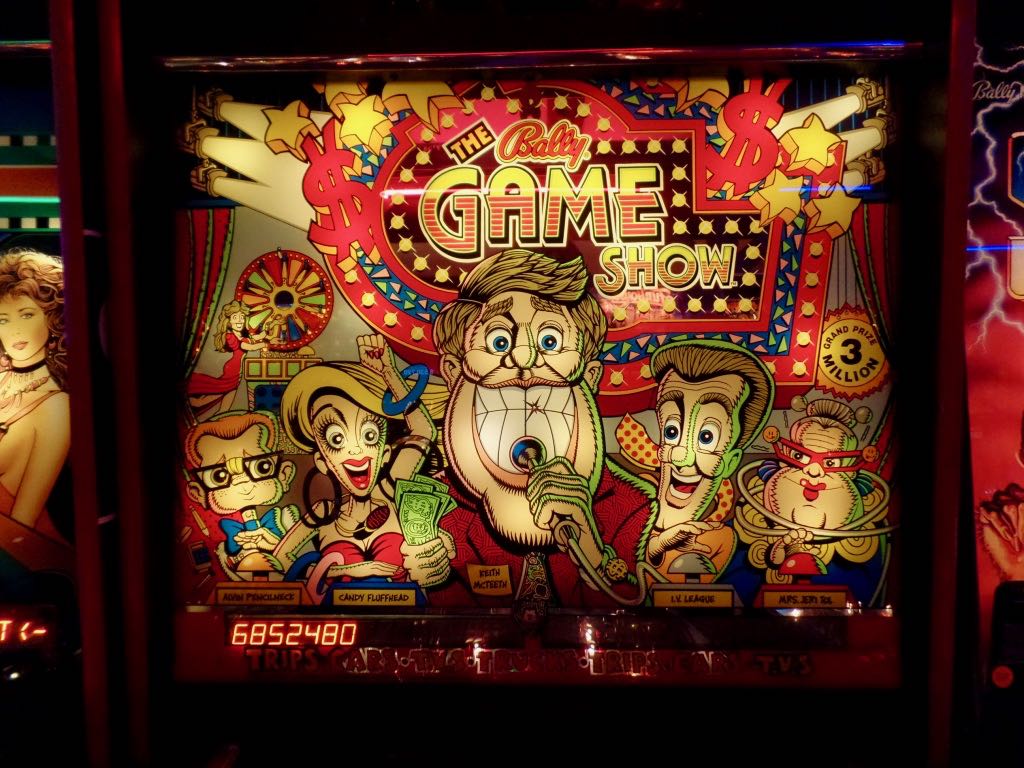 Bally's Game Show, one of the surprisingly few game-show-themed pinball games out there. I had a pretty good game. 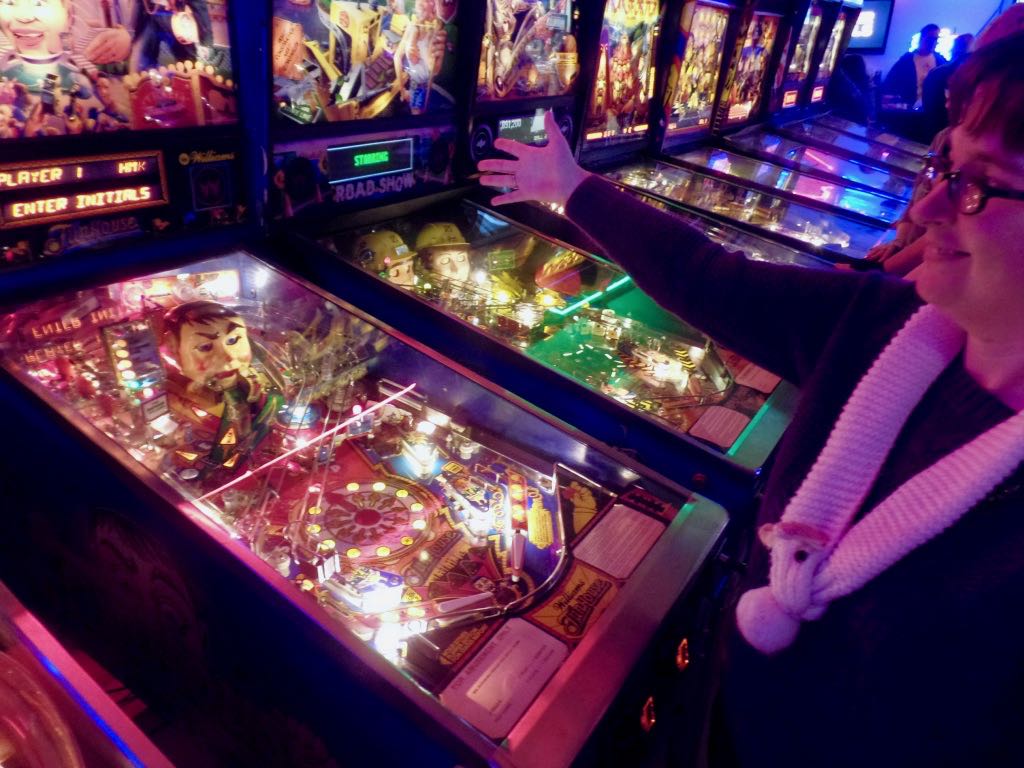 bunny_hugger achieves her goal for the night: a high score on FunHouse. 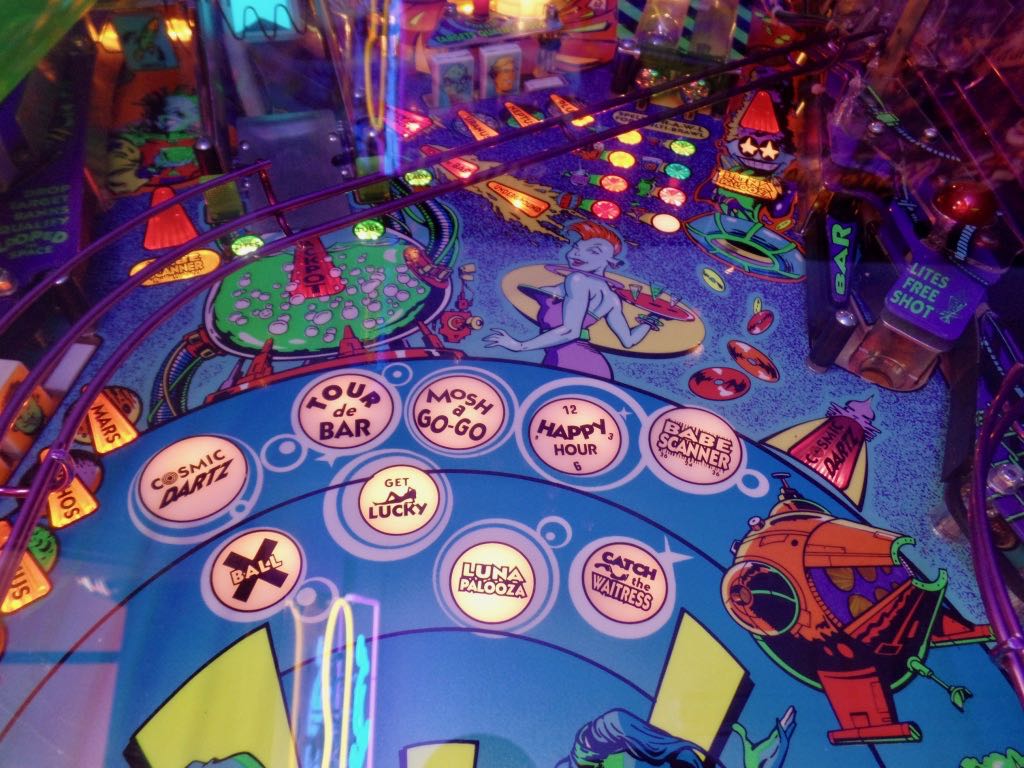 Playfield detail for the Capcom rarity Big Bang Bar. It's a fun game, with a theme of ... well, an outer space bar. Although when you look at some of the modes here ... I mean ... you kind of understand why pinball needs to apologize a lot to women and to the men who don't fundamentally dislike women. 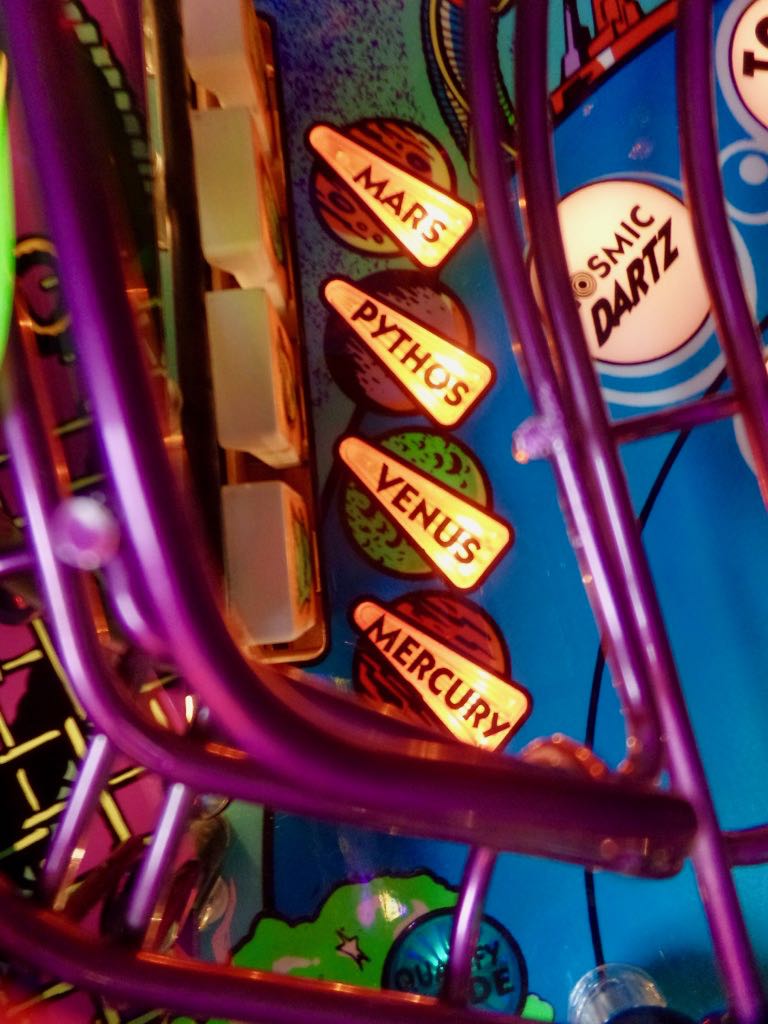 ``Big Bang Bar was partly designed by Python Angelo, you say? I would never have guessed except by looking at the game any.'' 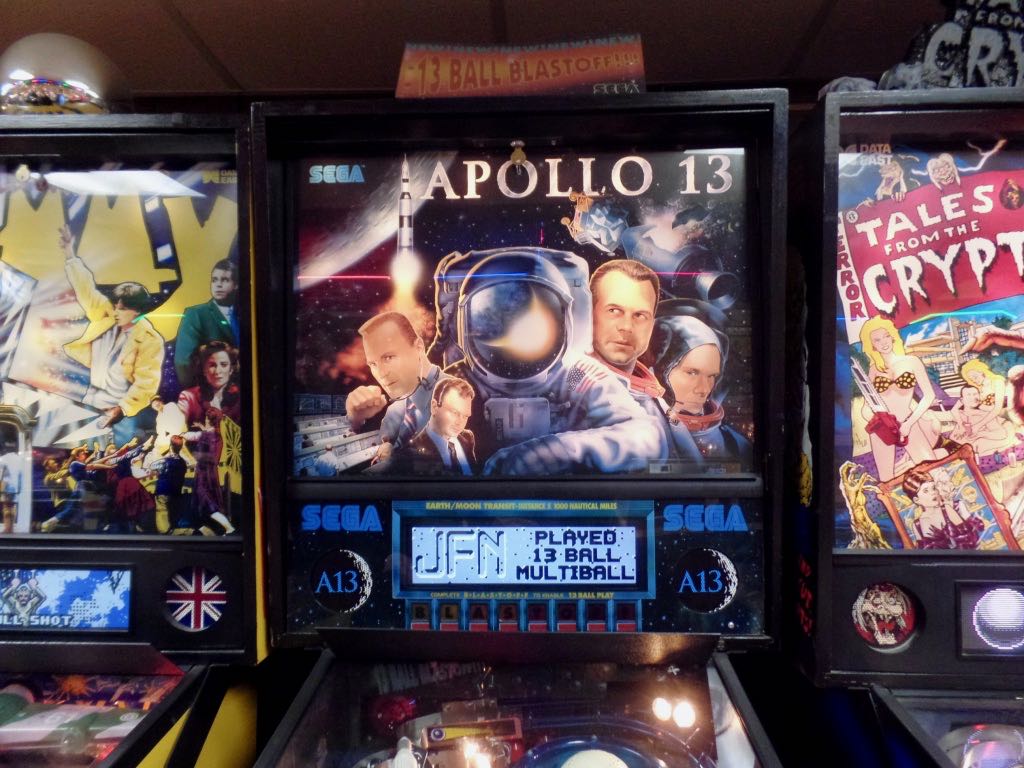 The central gimmick of Sega's Apollo 13 game is, like it says, the 13-ball multiball. It is the funniest multiball in pinball and there are few things more delightful than watching someone realize this shower of pinballs is coming at them. 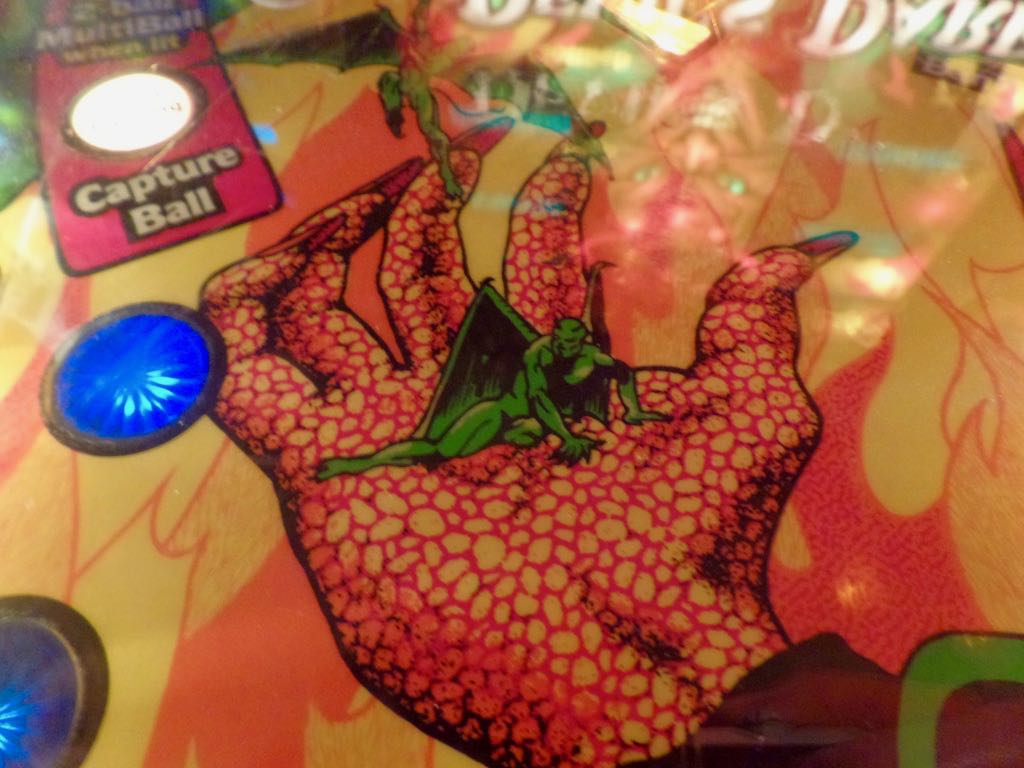 Adorable little demon resting in the palm of satan, from the Devil's Dare playfield. 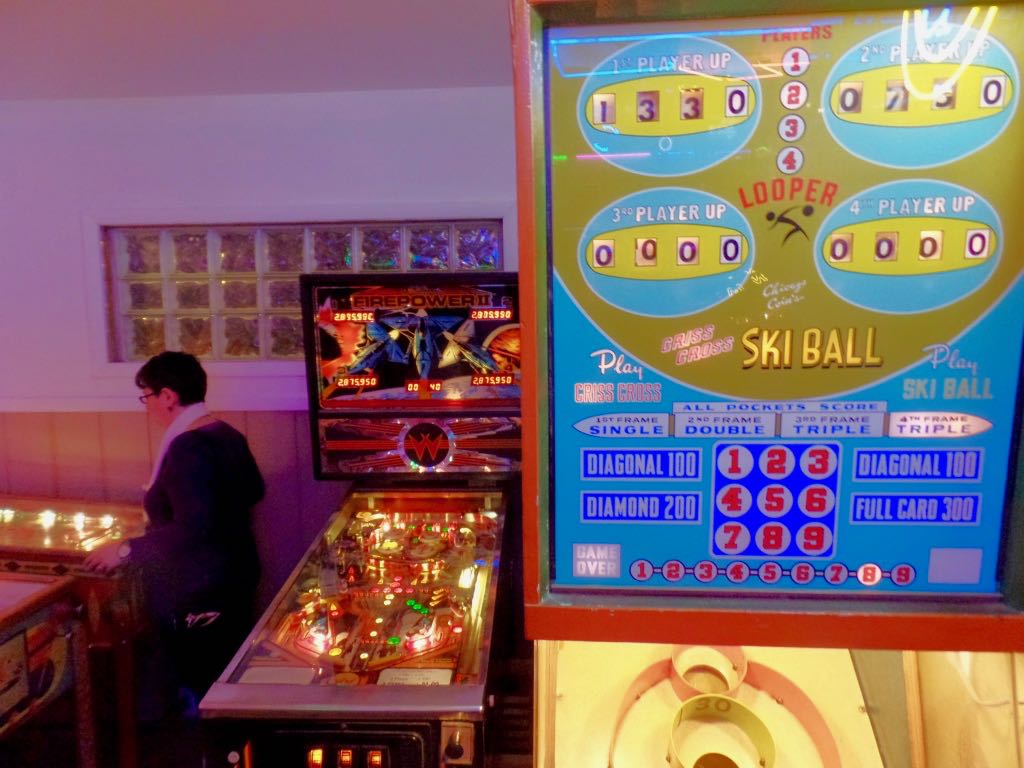 bunny_hugger getting in some quality time in Woodrail Row, a bunch of 1950s games from before the era you could necessarily count on pinballs having scoring reels or two flippers or even flippers at all. Firepower II here is an anachronism and, if I remember right, it tended to reset mid-game anyway. 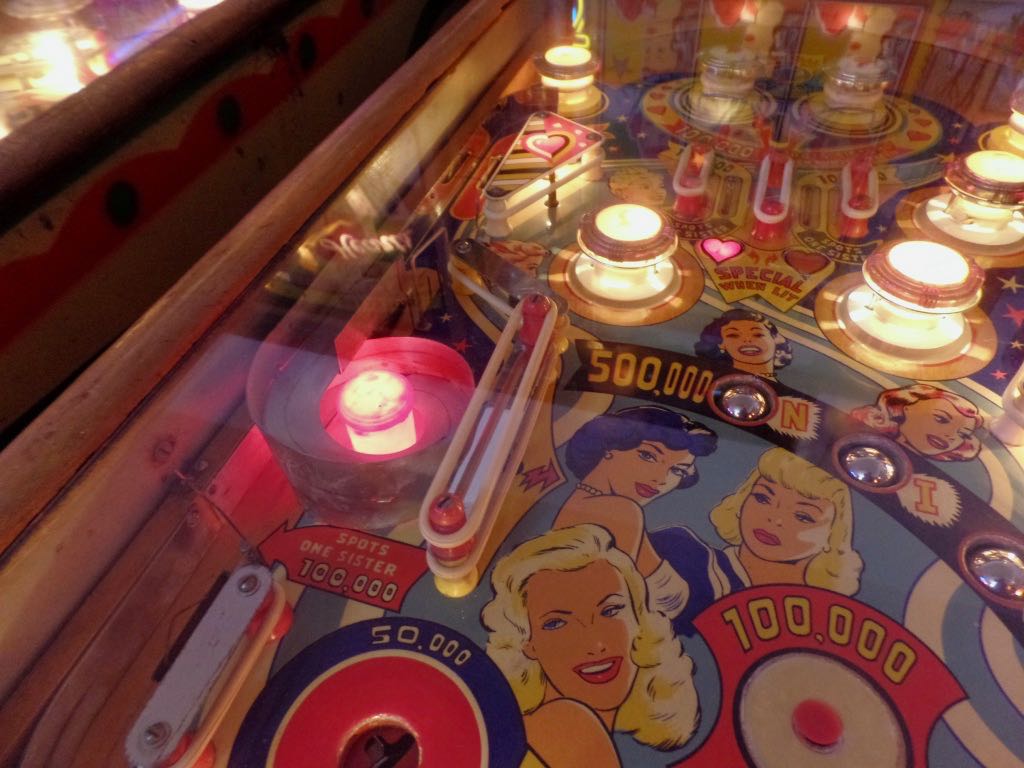 Neat little helix whirligig feature of Nine Sisters, a 1953 Williams game. It's a neat little thing that can launch a ball back up into play, and it goes over this helix because that's a bit more fun. (There's a kicker at the end of the helix, which kicks it the rest of the way up.) Nine Sisters was one of Williams's first experiments with scoring reels. Also the game has just the one flipper, although it has buttons on the left and right so you can play as feels normal-ish.

Trivia: Building of the Absecon Lighthouse, opened in 1857 in Atlantic City, New Jersey, was promoted by the Camden and Atlantic Railroad. Source: Railroads of New Jersey: Fragments of the Past in the Garden State Landscape, Lorett Treese.