The town east of East Lansing is named Meridian. It's called that for sensible reasons: it's along the principal meridian used for the Michigan Survey, which laid out the property reference for the then-Territory. All land in Michigan is surveyed from that point. There is also the state baseline, the reference latitude. It runs from the north end of Wayne County, which contains Detroit. They intersect, as they must. Meridian-Baseline State Park was established in the 70s, but it was landlocked. It was not until 2014 that the state purchased any property that offered road access, or places to build a parking lot, or provide any interpretative material.

bunny_hugger had been fascinated for decades by this theoretically open but inaccessible state park, and missed the news that it had opened. But this meant one thing: she had to plant a letterbox there.

She spent some of her too-scarce time in fall carving one. A grand one too, with a compass rose in the midst of several trees, a great representation for this most precisely known location in Michigan. And she could make this letterbox an even better find: besides its good location we had a hitchhiker to offer. This would be the Air Mail hitchhiker we'd picked up at the rest area on I-96, the one that was so badly waterlogged and ant-infested that she'd had to do emergency surgery, separating pages and drying them in the back of my car. The log was as repaired as could be, and we were ready to re-launch it. A new box in a prime location would be great.

The trouble is that weekends in October got consumed with things, including Halloweekends and visits to her parents and a host of other events. And she got frustrated by small things, like, trying to make a good reference print of her own stamp. She made a great one for the start of the logbook. She tried to make another, to print out and make a solid wood backing for the stamp. But every attempt at re-printing it came out a bit worse --- terrible, by her lights --- and she could never get it to where she liked. And even trying to glue a backing on turned into a fiasco, as the glue didn't stick, but it did turn into this gummy mess that left her infuriated. And that ate up time. With each busy week and booked weekend we lost more time, the weather getting worse and worse. Someone might come out to explore a new letterbox when the weather was good; but going in to December? (December turned out to be a fairly nice one, as mid-Michigan Decembers go, but there's no counting on that, and nice is a relative measure anyway.)

PS: And some more of the VFW Ann Arbor etc. 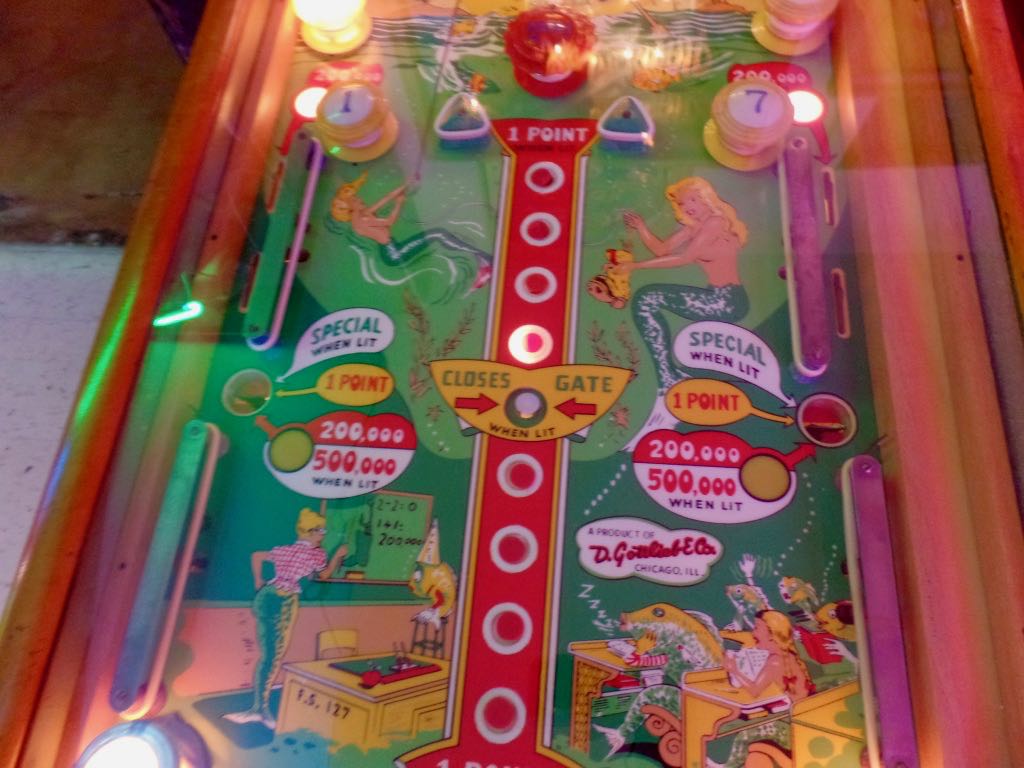 Some of the tall playfield of Gottlieb's 1951 game Mermaid. It's a much more open playfield than you'd see in a modern game, although the line of rollover buttons in the middle gives you something low-down to shoot for. The real action is the bumpers at top, where you want to hit each of the numbers 1 through 7 or so. 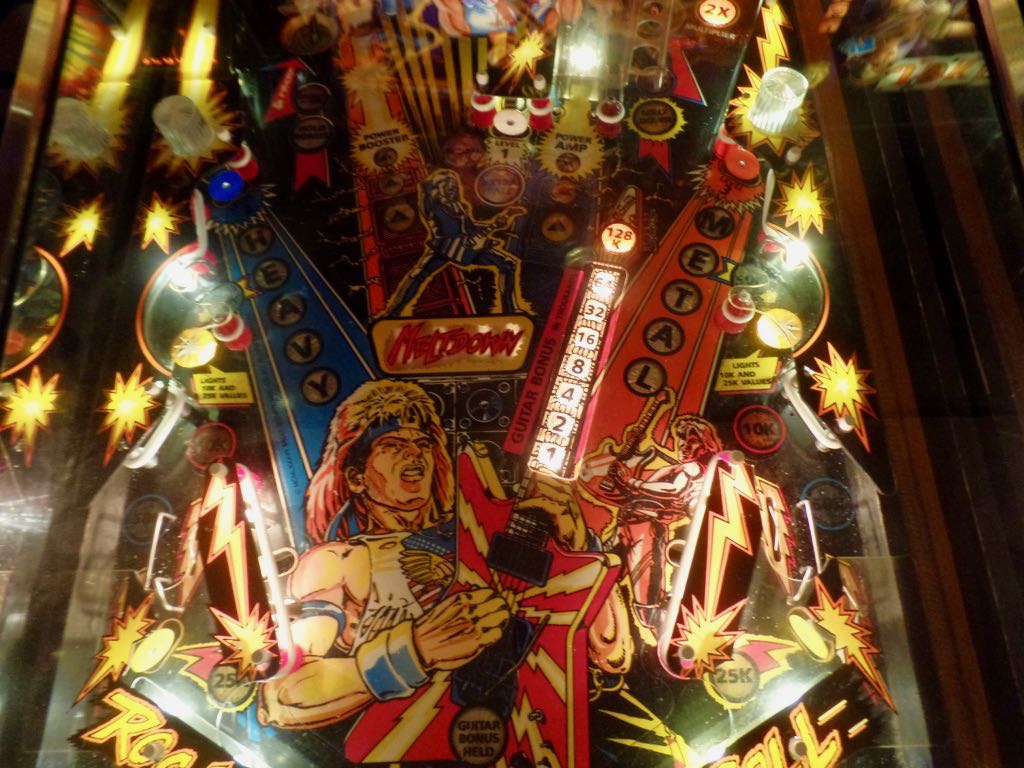 Lower playfield of Ball Midway's 1987 Heavy Metal Meltdown, a game notable for having this awesome synthesizer power chord that plays when you hit pretty much anything. 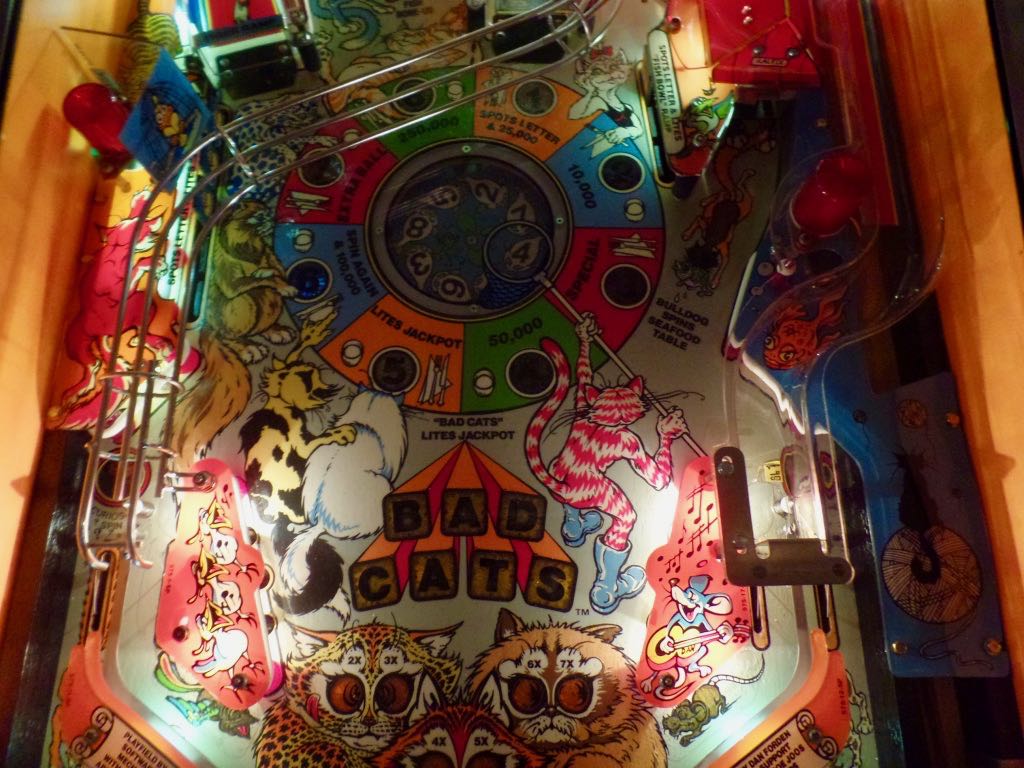 Lower playfield of Williams's 1989 Bad Cats. I know I post this picture like every three months but please understand: it's a pretty fun cartoony-chaos-themed game.