Friday for Pinball At The Zoo we thought would be short, but not unbearably so.

bunny_hugger had class, and didn't feel she could just cancel it, especially not after the many weather-induced cancellations earlier in the year. But she could cancel office hours, and get home by 2:30, 3:00, plenty of time to put in six hours at the show. She had forgotten something. This would be department meetings. She could have easily skipped that except this was the meeting to set teaching schedules. This is missed at considerable peril. She wouldn't get home until 6:00, and fuming, especially as it happened that she didn't have to fight to avoid an unbearable schedule. We decided, with some dissatisfaction at how little time we'd have, to go back to Kalamazoo anyway.

We would only have two and a half hours of play time, by the time we were on the road. But two and a half hours Friday was playing time we could not have on Saturday. Plus Black Knight: Swords of Rage was there, and taking scores. In our absence, the new players had driven our scores down out of A Division contention. We could use the time to shore ourselves up. Maybe get back into A Division. Certainly secure B Division placement for us.

Could is a load-bearing word.

bunny_hugger got onto Black Knight: Swords of Rage and, not knowing anything about the game, put up 13 million points. This was somewhere in the top fifteen finishes anyone had made on the brand-new game. It would finish the weekend at like 32nd, but still, a good enough finish to matter for her standings. She'd also make some improvement on Whirlwind, although nothing she wouldn't better later on. She made a string of tries on early-solid-state Laser Cue, without getting anywhere.

Me, I stepped up to Black Knight and, feeling confident about the general ability of new games to clue you in to what to do, put up 3.6 million, a score that could be described as ``made all the basic skill shots''. I licked my wounds on Eight Ball and put up my best relative performance on any game, a score that would be 15th-best for the weekend on that pool-themed early solid state. I got back in the long queue for Black Knight and .... well, I almost doubled my score, but that still wasn't much better. Then I beat my head against World Cup Soccer and Stars, trusting I could put something together on a modern game I know extremely well and an electromechanical. I could not.

So I felt myself in a slump. Thing about slumps is they end, but not when you're obsessing on them ending. Slumping performance is a kind of a rut. You can break out of it by keeping on until you get lucky and something turns well and you feel it ended. Or you can break out of it by going and doing something else, not worrying about your slump, and coming back refreshed. There's a couple little things you can try. Walking out and coming back in. For me, going off and getting a couple Reese's Pieces has been a lovely if calorie-bearing method. That didn't work either. I needed to do something bigger to break the pattern.

So I asked the desk if they needed any scorekeepers. Pinball At The Zoo has so many players on so many games putting up so many scores that they need a flock of people to record scores and put people into queues. They're always a little short on these. But playing was more frustrating than anything else. This way I could do the event a favor. Build up some good karma.

Karma, of course, doesn't work like that. You don't do good things and build good karma. You do things, and if they're done for good intentions and with good results, it's good karma.

Nevertheless, it was putting my time there to a more constructive purpose than fuming over how I couldn't find any shots on Stars. And it helped at a critical time, too: they needed at least four scorekeepers for the 9-to-10 hour, and nobody had signed up in advance. People had come to volunteer, and I'd be the fourth of the minimum four needed. But it felt good to be doing something needed.

bunny_hugger would characterize this as my giving up on attempting scores. It's true that it knocked me out for the last hour of play for the night. But I think that it did me good in improving my mood, certainly. And, as it happens, I ended up putting up more attempts on games than she did over the weekend. And only a couple fewer games on Friday than she did. Mine just took much less time.

And it let me actually see some of the other players, especially the out-of-state ringers. Sunshine Bon, who's not actually the namesake of our rabbit, was there. So was someone listed on the roster as ``Trailer Tom''. He appears to be a guy out of Colorado, someone who'd been in pinball way back in the oldest days --- the International Flipper Pinball Association has him finishing 12th at Pinburgh C Division in 2002, of 72 players. He hasn't got much recent, although he did play at an event at the 1up arcade in Denver that we visited last year. And I had some fun encounters too. When calling up the next player --- Derek Fugate --- I realized I could think of at least two pronunciations of that name, and apologized to him that I didn't know which he preferred. He insisted I could pronounce his name however I wanted. Fine, but, as I said, it's his name. I don't have standing to say it any particular way.

We closed the place out ---

bunny_hugger's final game of the night, an Eight Ball that didn't improve on her past results, came in just after the 10 pm closing hour --- and drove home, facing an uphill climb in the morning if we wanted to make it to playoffs.

Trivia: The Displaced Persons Act of 1948 required 40 percent of displaced persons accepted into the United States be from ``annexed areas'', that is, those taken by the Soviet Union after World War II. Source: The Long Road Home: The Aftermath of the Second World War, Ben Shapiro.

PS: Crossroads Village at Christmas 2017! What all is around the carousel? 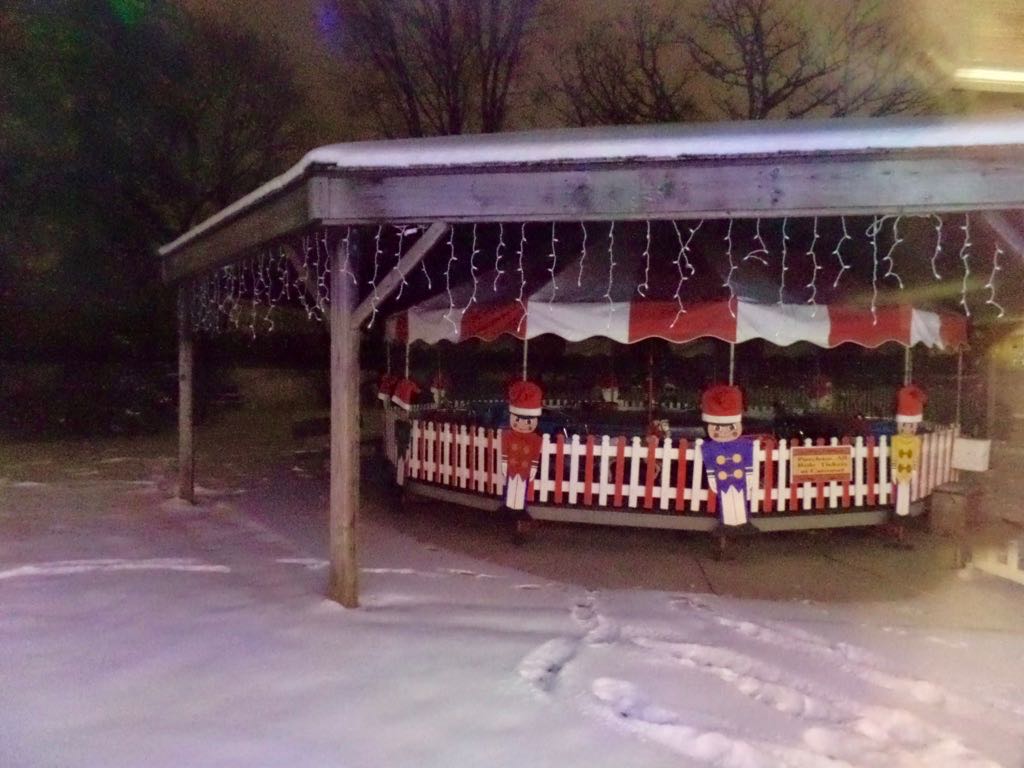 Outside the carousel building are some other small amusement-park rides. Kiddie rides, really, although the Venetian Swings is a good ride. They're closed, so far as we're aware, in the winter, apart from the Ferris wheel. The snow seems to support our analysis, as do the many footprints of people discovering ``no''. 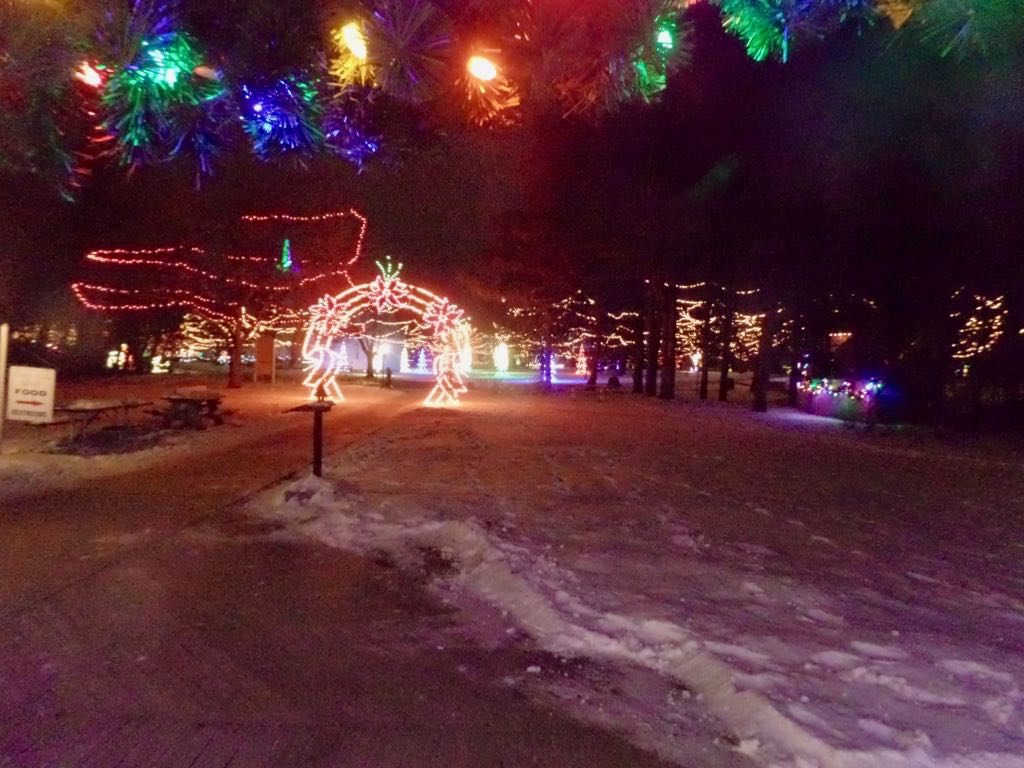 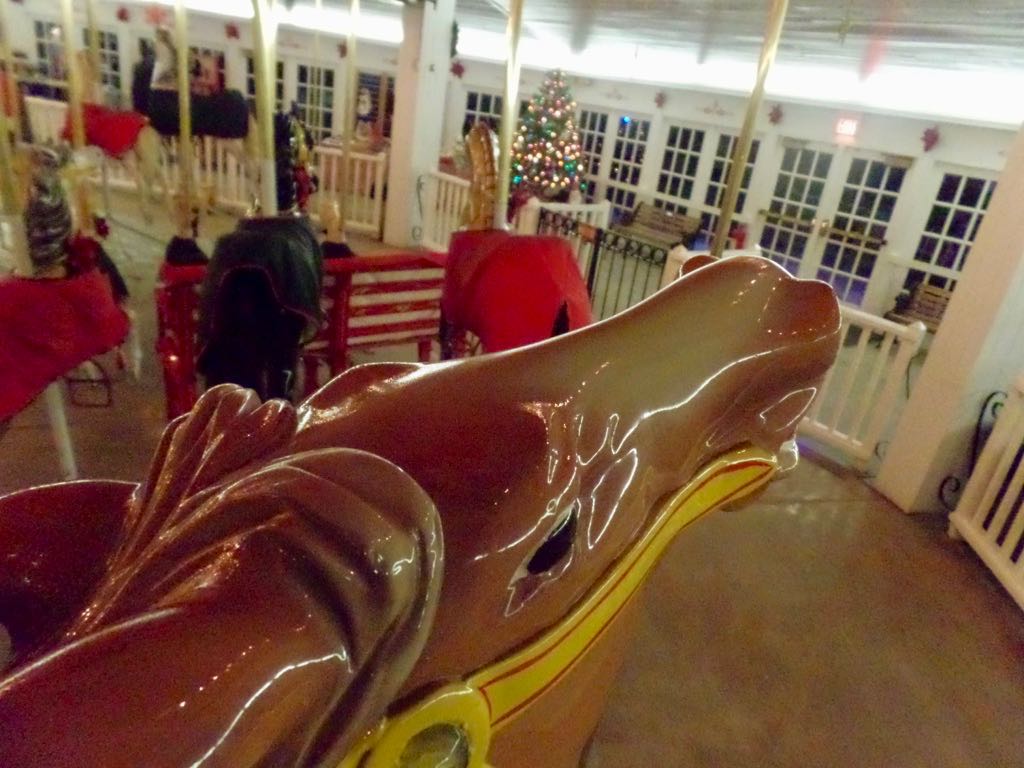 Finally one of our rides! The horses are covered in red and green blankets, likely to make them look more Christmas-y and maybe also to keep too much snow and slush and mud from being tracked onto them by the big winter crowds.