The last day of Pinball At The Zoo qualifying started at 9 am. The debate: do we get there then? Because the sooner we get there the earlier we have to wake and set out. It's a bit over an hour from Lansing to the Kalamazoo Expo Center. After more debate than I realized we'd have we set out aiming to arrive at 9:30, trusting that we would use the extra half-hour of sleep productively.

bunny_hugger did, starting off with a Whirlwind that about doubled her score and gave her one of the top-thirty scores of the weekend on that game. This reinforces the superstition about playing cold. I did not. I tried Fish Tales, a game I know very well but had only had one mediocre game on, and had a worse game. And worse again. I tried alternating World Cup Soccer and Fish Tales, as the tables I could most probably improve my scores on. I'd already had a billion-point World Cup Soccer, but I've done two and a half billion in the past, at this very event. Not in its 2019 instance, though. I thought about giving Stars another try, since I was sure I could do better. But I checked the app I record my personal high scores on and discovered, to my vague insult, that I have never had a good game of Stars. Like, the best score I've got recorded for myself on it would be about 50th place in the tournament, of 90 entrants. So with actual knowledge I could give up on that and go where my skills might be appreciated. Such is the value of having actual data. This kind of thing is going to turn me into a pinball sabermetrics nerd yet.

So despite my scorekeeping break, and my genuinely feeling fresh, I wasn't having any luck with my scores. Nor, after that first game, was

bunny_hugger. She kept trying Laser Cue, as the game she felt she could improve on, until giving up in frustration and moving to Stars. She did nothing but that for another hour, without improving her scores in the least.

My long, sad dry spell came to an end when I noticed Spider-Man free. This modern-era game was set up Hard --- the sign warned about that. With short ball save, too. And with lightning flippers, a valuable quarter-inch (or so) shorter than what the game was designed for. (The name comes from the jagged-lightning-bolt pattern decorating the flippers.) I'd had several dismal games on it Thursday, but, what did I have to lose? And this time, not a thing. Spider-Man, when you've got it working, lets you combine (``stack'') modes together easily, so that one shot counts for many accomplishments. This time I got things stacked, including multiball, and finished with just over 60 million points. That was one of the twenty best scores on the table that weekend. This may not sound like much, but, five top-twenty games is enough to make playoffs. It's plausible to make A Division. ... But it was under an hour left to play, and I had no entries left. I went to the desk and bought two more entries, saying, not to be stingy but what were the chances I'd get to a third table before qualifying time ran out?

So I went to The Walking Dead, on which I already had a fair score, but which I felt ... you know, I could do better than. I went back to basics: just hit the Prison door and the Well Walker, both of which start multiball if you do it enough. And I eventually got ... eh, a decent score. 65 million. A slight improvement on the 59 million I'd put up on Thursday, but still. It boosted my scores a little and, in this precious last half-hour of open qualifying, kept anybody else from putting up a better score. I gave The Walking Dead one more try and put up a slightly worse score. With the end of open qualifying I was three places out of making the bottom of B Division.

There were 32 finals slots. If this were not a Stern Pro Circuit event it would be thinkable that three people might not show up for finals. But ... people who had travelled here from Chicago? From Denver? From California? Never. At most maybe one person would have an emergency, but three? Not at all. I was out; I just had to wait for the official word.

bunny_hugger had used up all her entries but had about fifteen minutes left. She was sitting on the bubble, qualifying for the 8th spot in B Division. If all stood as it was, she was fine. Except ...

After the open qualifying finished there would be one more hour. In this, only scorekeepers would play, their compensation for giving up hours to scorekeep others. I know what you're thinking: oh, so I had a bonus hour. No; the scorekeeping hour was only for people who had put in three hours' work. They're wise to that trick. Anyway, for an hour a smaller set of people would be able to put in scores and those would most likely move us down.

But only most likely. There are some slight bonuses given the highest-scoring people on each game. This, and the best-six-of-twelve-scores-count format, mean it's possible for person A's game to move person B above person C, but you can't count on that.

So. She bought one more entry. And she picked one more game, going back to Laser Cue for one last time. At the last minute. The last game anyone would play in open qualifying on this. And she ...

She tore it up. She put up 538,330, more than halfway to rolling the table, and the 14th-best score altogether. And this after she'd already had top-eight games of Eight Ball and Stars. Add to that a 14th-best Fish Tales and she was going to finals.

She was, before the Scorekeepers' Hour, the top seed in B Division.

There was no chance of her making A --- she was about fifteen points out of that, and there's no way the Scorekeepers' Hour scoring could affect a change that big. And with no realistic chance of absentees she wouldn't be bumped up. But still. The Scorekeepers' Hour might shuffle her score a couple points, but not enough to change things. She was in.

She started the Scorekeepers' Hour one point ahead of EJO, who was himself a scorekeeper. Halfway through the hour, EJO had dropped to three points behind her. MWS used his hour to put up his best Black Knight: Swords of Rage, Fish Tales, Ghostbusters, Eight Ball, World Cup Soccer, Whirlwind, and Spider-Man.

This sounds like a great hour for him. But apart from Ghostbusters none of his scores were top-twenty, and some weren't even top-thirty. His Whirlwind was three-quarters

bunny_hugger's score. His Fish Tales one-quarter hers. His Stars score was half of hers. He beat her on Eight-Ball and Grand Prix and World Cup Soccer, but with scores themselves weak enough that it didn't matter. He finished ... well, three spots ahead of me. But his world ranking was such that he was A-Division-restricted. He was allowed to play in either the A Division finals or not at all, and he finished eleven positions out of A Division.

The Scorekeepers' Hour ended with

bunny_hugger and EJO tied for the top of B Division. The tiebreaker, for seeding, was who had the higher best-position-on-a-table, which EJO did. So she had, effectively, second seed. But that's all right. She had the enviable spot of ``driving the bus'': she would pick the tables on which they played the first round of finals.

Trivia: From 1707 to 1752 in the United Kingdom, the 1st-of-January-through-25th-of-March was reckoned as a different year in Scotland from what it was in England-and-Wales. Source: Marking Time: The Epic Quest to Invent the Perfect Calendar, Duncan Steel. (Both areas were on the Julian calendar yet; they just, in that interval, counted the year as different. That is, a Scottish source would give the George Washington's birth as the 11th of February, 1732, while a Welsh would give it as the 11th of February, 1731, if they had any reason to mention the topic.)

Are These Numbers A Thing? A question delivered me by 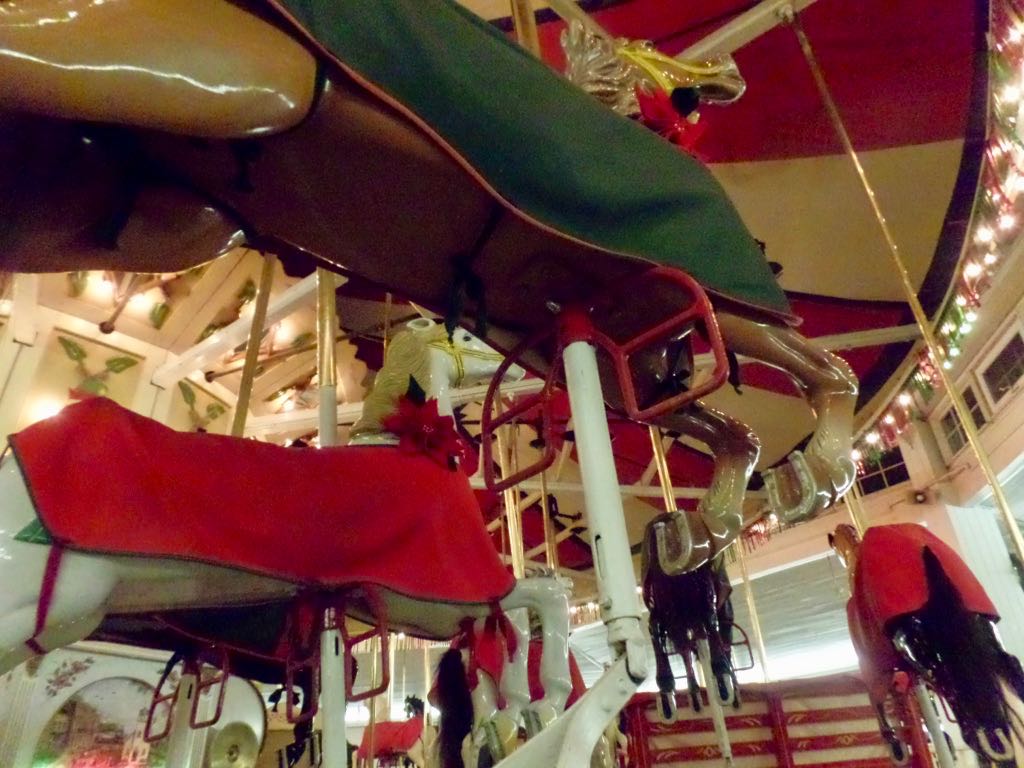 Haven't you always wondered what's underneath a carousel horse? Now you know, you perv. 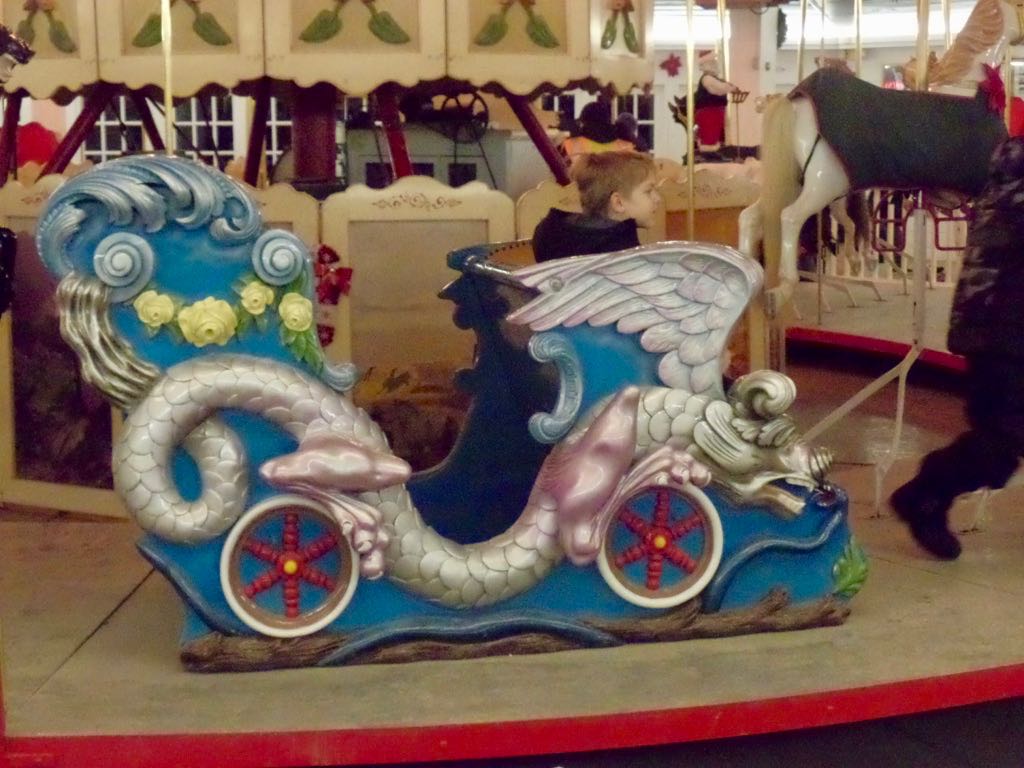 The chariot, carrying as often happens the carousel's only dragon ride. 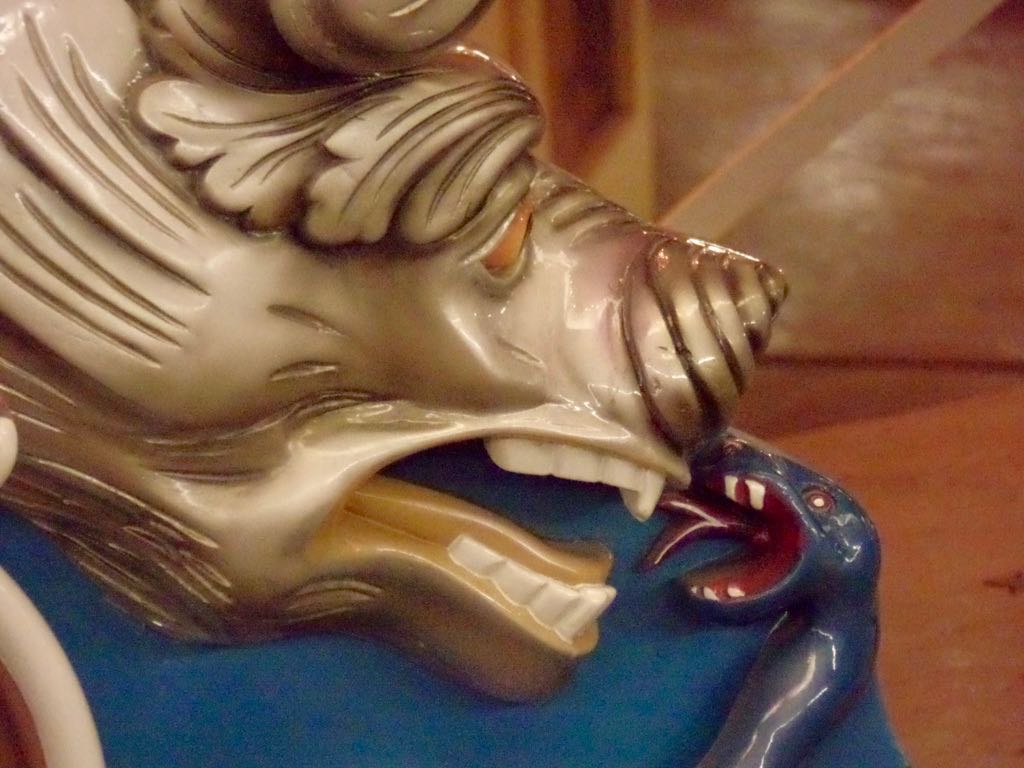 Also who doesn't love that body language of the dragon afraid of the tiny little serpent? That's a great dynamic.