The drawback of competing in a tournament at something like Pinball at the Zoo --- and, more of doing well in it --- is that you lose the time to actually wander around the convention. I'd taken some time on Thursday when not competing, but not enough. Now that

bunny_hugger had taken her prizes and stowed them safely in the car --- and gave to CST a can of turtle food that her parents had somehow been shipped by mistake --- we had a precious few hours to just hang around.

As we did, though, the convention was evaporating, people packing up their machines and moving them to their cars and trucks so as to get home at a reasonable hour. We were able to get to some exciting things. One was American Pinball's new table, Oktoberfest. American Pinball's a small company, in kind of that Jersey Jack zone where they're not a major maker (nobody but Stern is) but they're productive enough not to be a boutique maker anymore. Oktoberfest is themed to just what it says on the tin, and it startled us to realize we can't really think of the theme having been used before. ``Big, colorful party'' seems like a natural pinball theme, but then there's fewer amusement-park-themed games than you'd imagine too.

I'm not sure if the game is finished, but it felt pretty well-finished. Parts of the game represent different parts of a carnival, including a roller coaster shot. The jet bumpers are decorated as bumper cars, one of those things so inevitable you're amazed it hasn't been done before There's various modes started by going to the beer tent. There's a lot of peppy, silly music. The various modes include stuff like bumper cars, a Musik Express, and a Rotor ride. I'm a little cold to there being a ``chugging'' mode, since I'm just no fun about recreational alcohol poisoning. And the game's been controversial because the earlier art went way overboard with excited women being inadequately dressed, and when pinball players are complaining the art is gratuitously sexist you know it's bad.

But to give a sense of the level the game's working at, it has a feature you can activate when you start a game. This lets you play the entire game, flipping both flippers, using just the right flipper button. Why? So you can hold your beer in your left hand while you're playing. If that doesn't get at least a grin, the game's lost on you.

Our most wonderful discovery, though, was Gottleib's Big House, a crazypants late-solid-state pinball game from the company that invented crazypants late-solid-state pinball games. The theme is you're trying to break out of a slightly cartoony movie jail, with multiball being you make your big break and the jackpot from successfully escaping the warden. That's all strikingly linear for this era. The art has the prisoners represented by cartoony caricatures of old-time gangster or crime movie stars like Edward G Robinson or Peter Lorre. That's still doing well. Oh, half of the characters are animals for some reason. And that's where it gets baffling.

Making some characters literally rats or (presumably filthy) dogs or whatnot makes sense. Making minor characters (stool) pigeons makes sense. But then why stop halfway through? I'd understand if the backglass art were one way and the playfield another, or if the main playfield were one way and the art on the props were different. That could result from separate artists not understanding what the other was doing. But every element is mixed up like this. Like, the playfield has at bottom some realistic-cartoon thugs breaking out of jail. Above that are cops using search dogs that look like they're from a 1970s Scooby-Doo clone. And above that are pure cartoon rats-or-mice in cop helmets.

It was one of those wonderful, strange discoveries, the kind you make at a show like this where people want to show off the wonderful and strange games they have. Worth the day's admission at least.

We could get in a couple last games, but that was all. The show was ending. The question: do we go to the afterparty at MJS's pole barn? The reason this was a question: there was snow coming in. And, they forecast, a pretty major snow, something bringing a couple inches down. This in late April. You know, like people joke about happening in Michigan. I thought it worth trying to go, since how often do we get to the pole barn, but keep an eye on the weather and go home early if it seems to be getting bad. The saving grace here would be that while it was somehow cold enough to snow, the ground temperature was still warm, and it wasn't liable to make the roads that bad. I wound end up driving home at 50-to-60 mph, mind, this where the speed limit is 70. But that just let us get closer to caught up on our podcasts.

And of course we spent hours and hours at the party, pretty quickly forgetting our worries about the snow. It's always a nice place to visit and to hang out. MJS had added some decorations, too, a row of 70s-80s albums lining one room. If there is a theme to the art it's ``went to the record store and asked for 18 inches of records'', but it was an era of many wonderful and strange art covers. Also Rodney Dangerfield's rap album.

And we got to see more novelties. MJS has a Safecracker, a late-90s attempt by Bally to get operators more happy with pinball by making it more of a redemption game. It's got a break-into-the-bank pinball theme, with a small table and a time-limited mode meant to increase player turnover. One of its features is that it could shoot tokens out at the player. These tokens you'd then use to play a special alternate-rules version, called ``Assault on the Vault''. They had some, and we got to watch I want to say Derek Fugate (if I have this wrong, it doesn't matter) play this alternate, higher-tension, higher-energy version of the game. So that was worth brushing two inches of fat, wet snow off my car at the end of the night.

Trivia: William Bligh completed the mission of the Bounty --- the transplanting of breadfruit from Tahiti to Jamaica --- on the vessel HMS Providence. It was twice the size of the Bounty, and accompanied by the brig Assistant. Source: Mutiny: A History of Naval Insurrection, Leonard F Guttridge.

PS: Reading the Comics, May 11, 2019: I Concede I Am Late Edition, but I finished up last week's comics in time for this week's, so there's that.

PPS: And now the last big event of 2017, our visit to the Potter Park Zoo and its Wonderland of Lights. 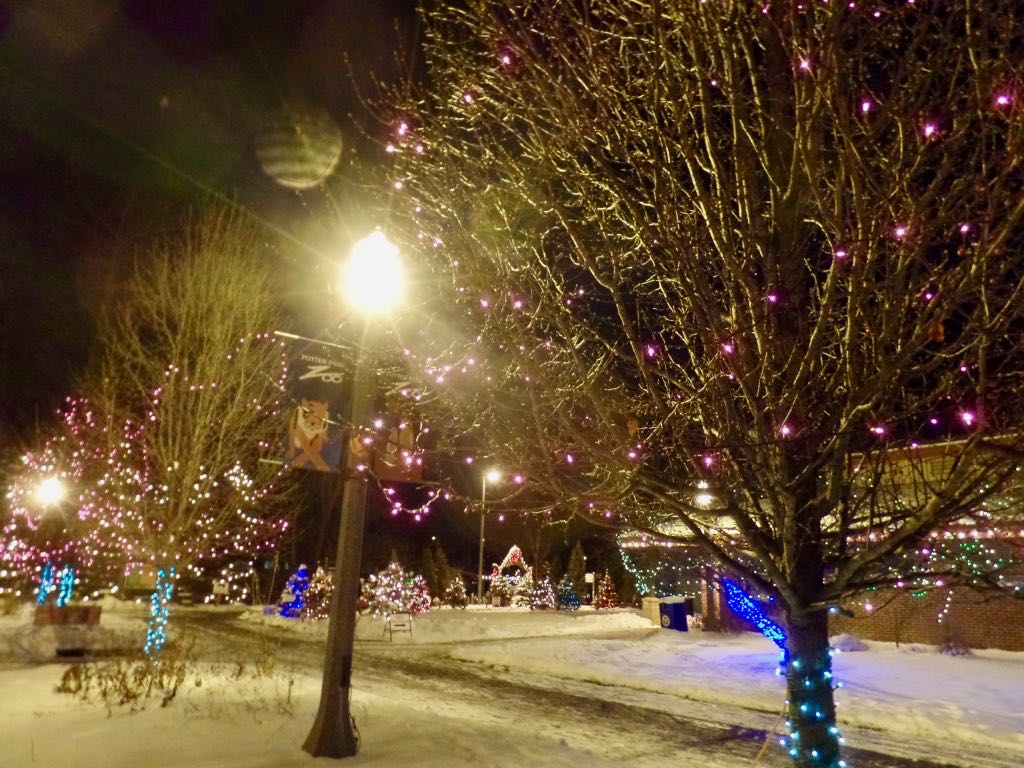 Just inside the zoo's entrance, and a good sense of what the place looked like. 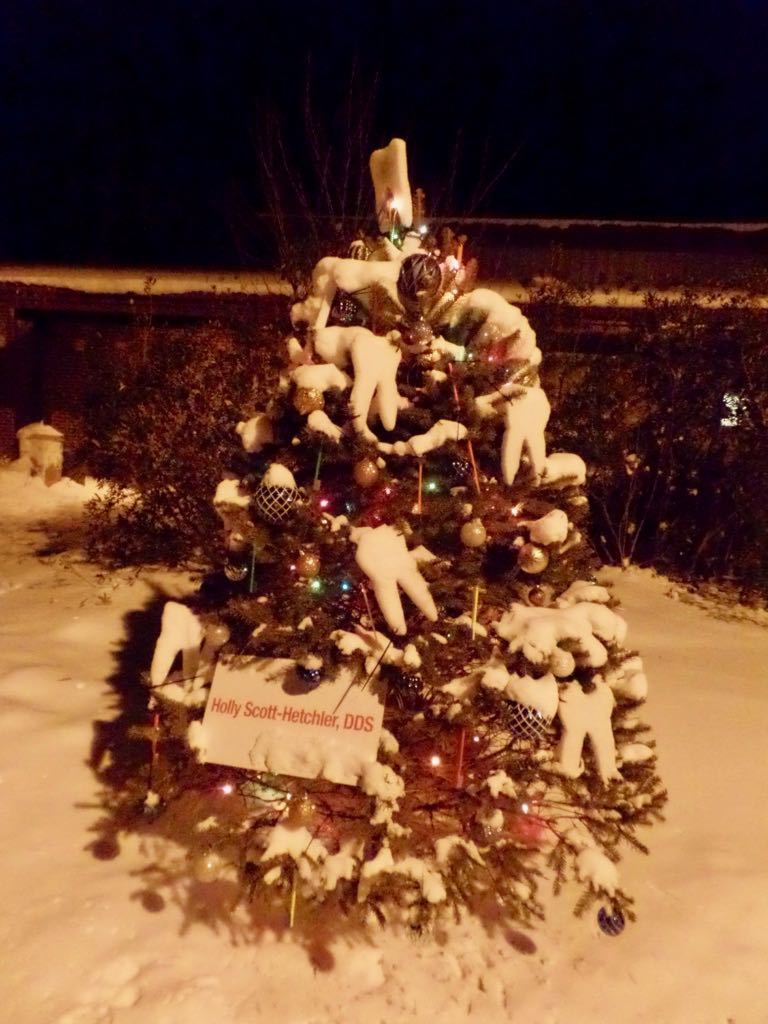 Up front are a great number of Christmas trees decorated by local agencies. A striking number of them are dentist's offices, although as far as we know our dentists aren't among them. Local tech companies that do Internet ... things ... get a lot of trees too. The tooth decorations don't stand out so well when there's fresh snow. 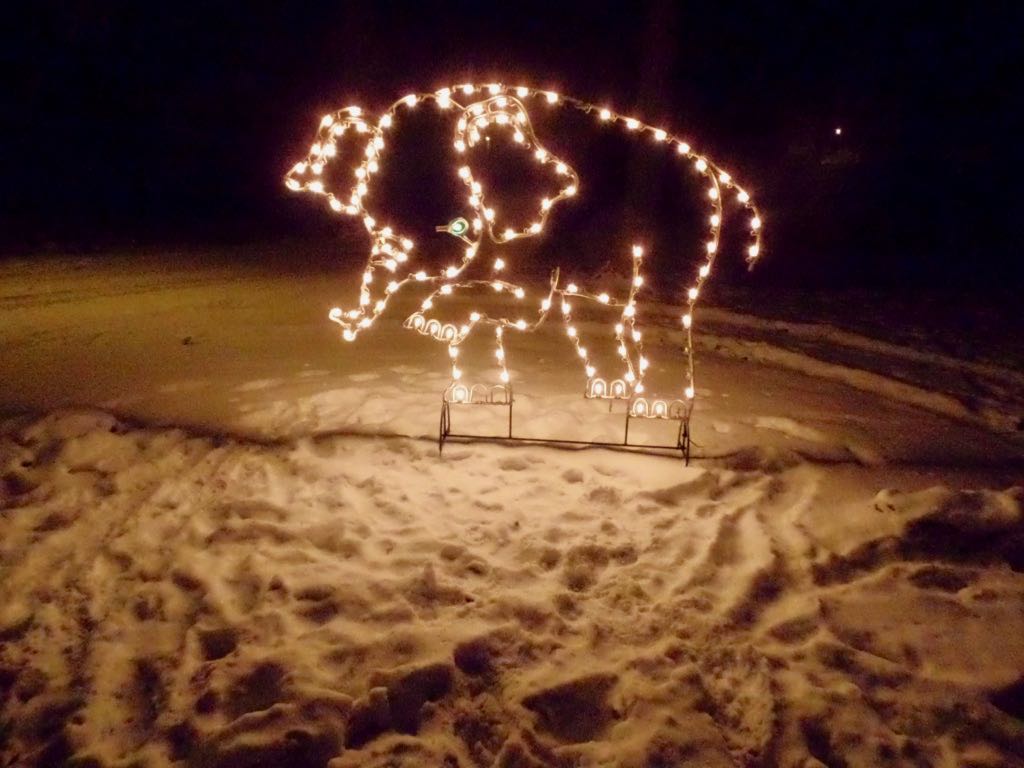 Elephant light fixture set up. Most of the animals for the zoo are in winter quarters, but their absence is made up for by lights like this which would not necessarily be out of place at Crossroads Village either.