bunny_hugger and I regret that we didn't get to Cedar Point or Michigan's Adventure enough. We resolve to go earlier in the season next year. Maybe even May. This year, we actually did. MWS and his partner K had planned to go to the park last Thursday, and asked if we wanted to come with. This seemed like a good idea to us. This would be the earliest in the season we've ever been to Cedar Point; it had opened just the week before. Michigan's Adventure still hasn't opened for the season.

We had small mishaps meeting up. We were late leaving our home, and a few minutes late getting to the rendezvous point as we failed to remember we'd be hitting Ann Arbor rush hour traffic. In transferring cars I missed

bunny_hugger's sunglasses, so she had to buy a too-expensive replacement at an Ohio turnpike rest stop. We got to the park about a half-hour after opening, which was extremely early by my and

bunny_hugger's standards. But we have season passes, so getting there at, like, 3 pm when the park closes at 8 (as it would) isn't too short a time. MWS and K have fewer chances to get to the park, and a need for more hours at it.

bunny_hugger disapproves of these, since they're field trips of dubious educational value. And they bring packs of schoolkids, who have a lot of energy and little impulse control or awareness that other people are trying to follow rules like 'don't jump the queues'. There were school groups at Cedar Point, but it was still a low-attendance day, and the groups weren't too raucous or oblivious. There were a couple of booths set up by agencies like the Michigan Science Center or the Toledo Zoo, giving demonstrations of things like how you can swing a bucket of water without spilling it, or that you could hold an antler. And the good thing about school groups is they leave in the early to mid-afternoon, so if you don't, the park suddenly becomes far less crowded.

MWS and K, it turns out, picked almost a perfect day for the park. It was clear and sunny, and in the low-to-mid-60s. It was breezy at times, but not uncomfortably so. No rain, not until we were driving home. None of the shows had started for the season, and a fair number of the concession stands weren't open. But none of the rides had impossibly great wait times. Even Steel Vengeance, the longest of the queues, came in in under 90 minutes our first ride, and under 40 minutes our second. Maverick, always a long wait, was down to about a half-hour. Millennium Force was only about ten minutes. There were roller coasters we didn't get on. Top Thrill Dragster was closed intermittently during the day. So was Magnum XL-200. Corkscrew we just never got near, for some reason. Rougarou and Wicked Twister we didn't get around to. But if we had tried just a touch harder? We probably could have done all the roller coasters (besides Wilderness Run, which unaccompanied adults aren't allowed on) in a day.

Some changes in the park from last year. The spot that had been the Witches Wheel has turned into a restaurant. A barbecue place, so that's dull, although it had an outdoor stage with the sign 'Elvis has left the building --- but will return May 25th'. Steel Vengeance has added a metal detector to the queue. Why? So that if you have a cell phone or camera or keys, they can stamp your hand with a big red X. You're supposed to tuck those into a small pouch underneath the seat, the better to keep them from flying loose while the ride's under way. The ride is very fast, and very twisty, and ... honestly, putting things in the pouch is not a bad idea, much as I worried that I'd forget and leave my camera in there. And it means that it's now safe to take your camera out in the queue and photograph the signs and decorations and such. Last year, after they adopted the no-cell-phones policy, being caught in line with the camera could in principle get you kicked off the ride.

The Mine Ride roller coaster has a new sign, one celebrating its 50th anniversary. And some new theming, too, sprucing up the launch station and the repair shed that the track rolls through. It's nice to see the ride getting some love, and tying it more closely to the world-building they're doing on the Frontiertown rides and attractions.

Gone in what is, in hindsight, not a surprise: the Midway Market. The buffet restaurant, traditionally the best dining value per pound of industrial-grade macaroni and cheese, was turned into ``Hugo's Italian Kitchen''. This offered pizzas and stromboli and calzone and it's all okay enough, although I did think the calzone a bit tough for the plastic silverware. And it's nice to have different vegetarian options, although I'd rather have the buffet place back. Also somehow the bathrooms weren't working yet in the renovated building?

Gone in what was a surprise because everyone had expected it for decades: the Cedars. These were some century-old buildings, originally built as a guest hotel, and used for decades as staff housing. They got torn down over the winter. What's there now? ... For this summer, at least, a monster truck ride, a muddy pit where you can get a ride in a full-size monster truck. There's a whole monster truck thing for this summer set up, although it hadn't yet opened. This doesn't seem like it's intended to be a permanent attraction, although they were building a queue and a path from the main body of the park across the road to the truck ride. This might be a transitional thing while they figure out what to do with the space. They studiously did not cut down all the trees that had been around the Cedars, suggesting that whatever they do plan on will have some shading.

Not changed, but still a disappointment: there's no pinball in the casino. The games taken out at the end of last season haven't been replaced; nor have the old mechanical coin-op attractions, like shooting galleries and test-your-strength gizmos and all. We did play a couple rounds of Skee-Ball. And MWS played a crane game and on the third try won a How To Train Your Dragon-themed plush doll. Not of Toothless, but of beloved other dragon (Red dragon with a fairly bulbous snout, whoever that is). It'd be a bit of a hassle carrying that around and we traded off whose pouch that would go in, at least until I discovered if I posed it just right it would fit in my cargo pants pocket.

One recurring surprise for the day: birds! There were a bunch of nesting birds at the park, some of them quite close to the action. There was a duck who'd set up a nest on the ground next to one of the Frontiertown restaurants. Kind-hearted people had set out a dish of water and a couple of grapes in easy range. Meanwhile over on Raptor a seagull had her nest, with a gorgeous speckled blue egg, just on the inside of a safety fence from the queue. There's always wildlife in the park. This is more nesting birds than I'm used to, and suggests we could see more like this if we just visited Cedar Point in May like we keep saying we should do.

A happy discovery: there's a place on the Frontier Trail that sells coffee now. The unhappy part: we discovered this only after we made the long trek to the front of the park and the longer wait through the queue at the Starbuck's that we thought was the only place to get coffee. Well, it's possible the Frontier Trail coffee place wasn't yet open for the season.

bunny_hugger felt a bit motion-sick through much of the evening, even despite taking her motion-sickness pills. It seems to me likely this was from a mix of her being tired --- she hasn't had a good full night's sleep in ages --- and our extremely heavy roller-coaster-riding. We did get to all the intensest rides, and with very little waiting time, a probably more challenging ride load than she and I would do if we were on our own. We'd space things out with carousels and antique car rides and walking around the town museum and such. She'd also pick up a cough, soon, and maybe she was feeling a nauseous from whatever bug she was getting.

Still, in all, it was a really good day at the park. Well-timed, well-chosen, and for that matter, since the park closed at 8:00, we were able to get home at a not-absurdly-late hour. It'd be hard to top all that.

Trivia: The first Liverpool Packet, the James Monroe, left Pier 23, in New York City, the morning of the 5th of January, 1818; it was in the midst of a nor'easter. Source: Atlantic: Great Sea Battles, Heroic Discoveries, Titanic Storms, and a Vast Ocean of a Million Stories, Simon Winchester.

PS: The last of the Potter Park Zoo Wonderland of Lights? ... Not quite yet. But it's close. And some special stuff for 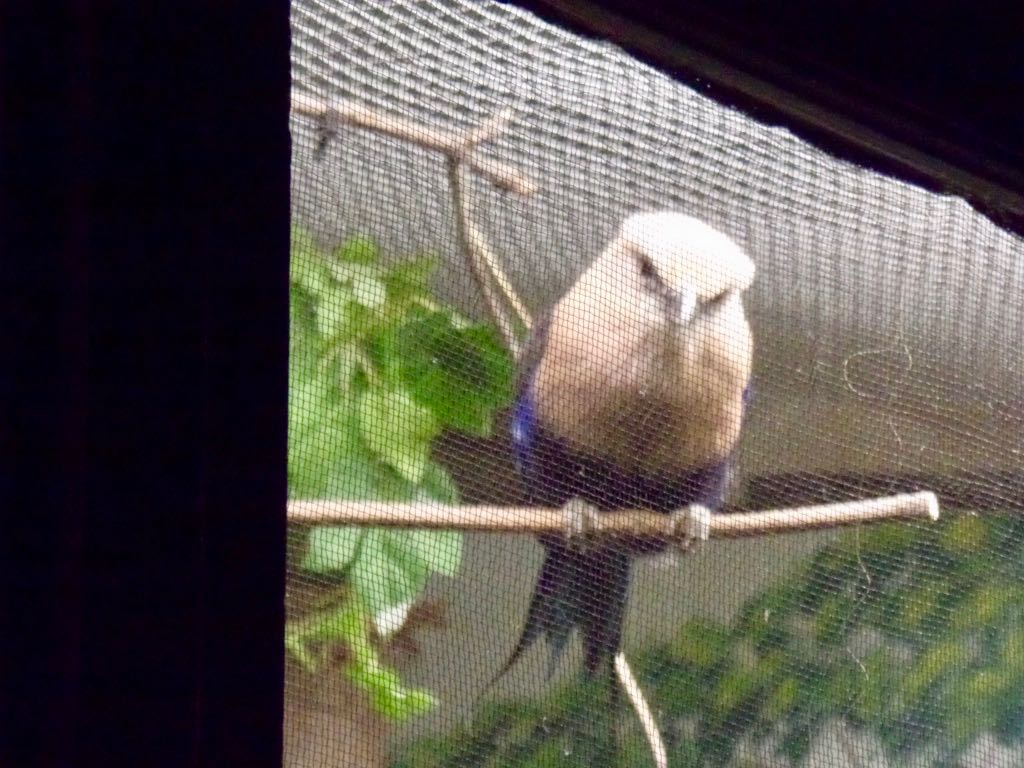 Inside the bird house a blue-bellied roller (an African bird that lives around the southern end of the Sahara) does not like me one bit. 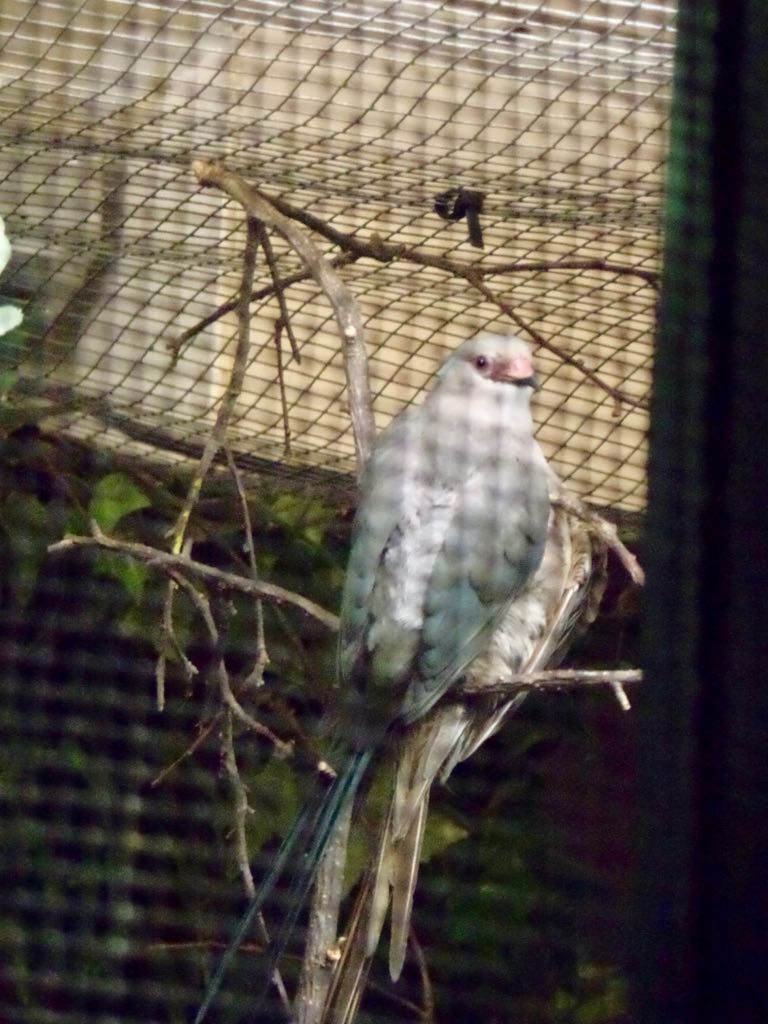 Meanwhile, the blue-naped mousebird (another central-and-east African bird) is willing to give me the chance to make a fool of myself at least. 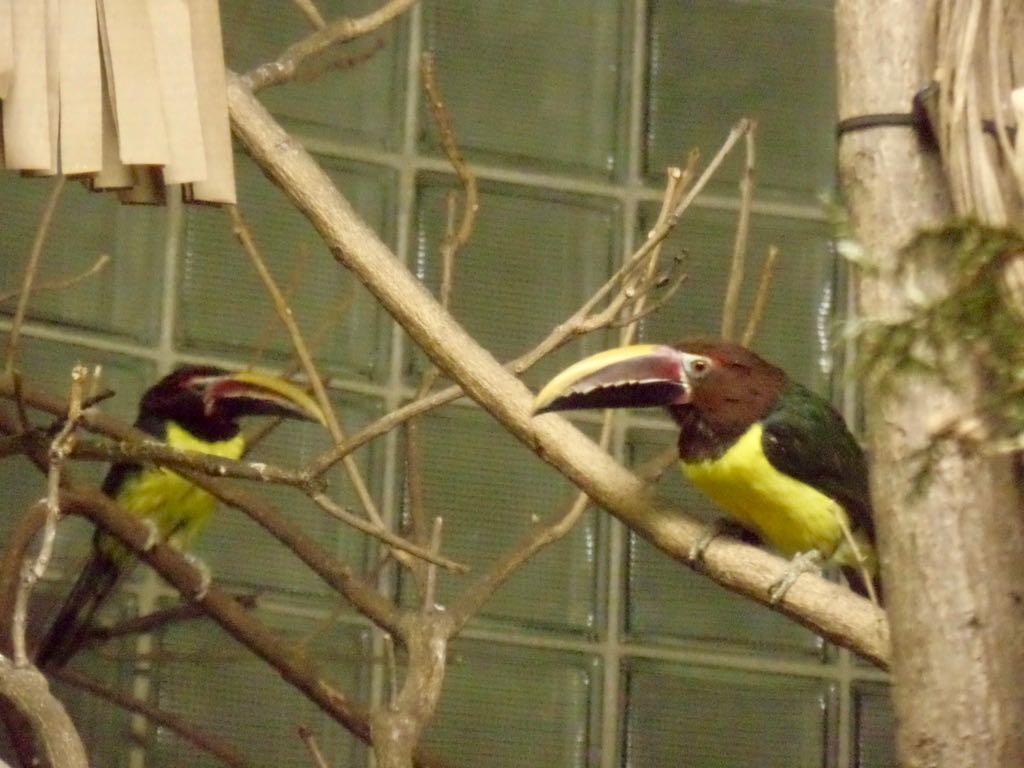 A couple of green aracari --- the smallest of toucans --- want me to admire their beaks. Well, I do.