The obvious change when we got to Opening Ceremonies was the stage's arrangement. The stage was set to cut diagonally across the ballroom, rather than run parallel to a wall. It's probably a good way to seat most people closer to the stage. There was an awkward side rectangle of seats staring at nothing but a TV screen which, at least at Opening Ceremonies, had nothing on it. As changes go, nothing bad or alarming. Somewhat alarming: they didn't have the puppet stage anymore. Morphicon used to have a puppeteering track, withered away as the people who knew what they were doing moved away. But they kept the PVC stage setting through to last year's AnthrOhio, even as

bunny_hugger and I were the only ones even bringing puppets to the con. So we can't fault them dropping a thing that's probably complicated to assemble and not really used for anything. But it's another old piece of the convention gone.

This year's charity was The Pipsqueakery, a rabbit-and-rodent rescue. We already had a weird relationship with them: some of their volunteers got into a Facebook War with the rabbit rescue from whom we adopted Stephen and Penelope. Private animal rescues seem prone to drama, possibly because the low budgets and great need select for people who are very passionate amateurs. Possibly because it is very easy to get your own idea about how to take care for these creatures you love, and any variations are dangerous things. And, like, it's easy to worry that some other shelter is actually taking poor care of animals, since they're all desperately overloaded, and it's easy to suspect that any problem is a sign of systematic failure. I am not informed enough about the specifics of their Facebook War to say just what happened. Nor am I competent to judge whose accusations of what are more of the truth. I'm naturally inclined toward the rescue from which we got two wonderful rabbits.

But the Pipsqueakery was allowed to set up animals for show inside the hotel, an improvement on the old place. They had several large tables with a guinea pig enclosure, as well as cages for rats, chinchillas, degus, and the like. And, on the floor, several big enclosures full of rabbits. Some large rabbits: they had two Flemish Giants or New Zealand whites, bigger than even Columbo was. Some small rabbits, including a couple that had leg problems making them barely amble to move around. And one lop-eared rabbit with such an endearing long head, and enormous ears, that

bunny_hugger was tempted to adopt her on the spot. The ears were so long that she sometimes got them caught under her feet. Really our only serious reservation about adopting any of them was would they get along with our Sunshine. Recall that she did not get on with Penelope in the slightest. That might have owed to Penelope's grumbly nature. But female rabbits are notoriously territorial, and bringing a second into one's home needs to be done with delicacy, and even then might not work. If it were possible to ``date'' them, and see whether they could stand each other to start with, we'd have tried.

bunny_hugger got some in-cage time with the rabbits, and that wasn't enough really. Meanwhile the guinea pigs meant that I got even more, and longer, looks from people trying to work out whether my guinea pig puppet might be real. The actual guinea pigs seemed willing to at least investigate my puppet, when it was up against their cages, but then they remembered they could not be bothering with things, which is really what makes guinea pigs charmers.

Another, developing, tradition of the con is the grease trucks parked outside. At least the first day there was the crepes truck we'd been happy with last year. This year we got one of their breakfast crepes for a lunch that was bigger than we realized it would be. So that all worked very nicely.

One longrunning tradition of the convention has been species SIGs, get-togethers of everyone with an interest in some particular animal or group of animals. Their number had dwindled some so

bunny_hugger offered to host a bunch of panels. They all got accepted. Her first panel, Avians Assemble, offered a place for everyone with a bird or bird-adjacent character (like gryphons) to gather and talk about themselves. She's had a couple bird characters, mostly corvids, in the past, and wore her peacock kigurumi to host the event. And it was well-attended, maybe because birds haven't got enough attention, maybe because it was mid-afternoon the first day of the convention. When we get Sunday morning panels they're always dead.

Another longrunning tradition is giving out shaky directions to any panels. There were places to put signs describing what's going on in each room, but no signs. So I started making up signs and slipping them in myself. These got a tiny bit more sophisticated over the weekend --- by the time of the Rodents SIG, it included a very rough sketch of a curious-looking mouse, and the warning that this was not your buffet. But never anything much.

bunny_hugger's next SIG was in the same room, Scalies. This was meant for reptiles, dragons, amphibians, and fish. Anything that might have scales or be thought of as scaled. This ended up mostly populated by dragons, as you might figure. No signs of any amphibians. This got some confusion as apparently there was disagreement between online and con-book schedules about what room it should be in. I went to the other room we heard about and asked the meager audience --- two people, plus the person presenting whatever --- if they were looking for the Scalies, and felt bad that I was poaching their group. They weren't looking for Scalies anyway.

Also one of the curtain rods in the conference room fell down. The guy from the convention who was doing a room-population count ran off to tell the hotel about this, and they sent someone within seconds to inspect the situation. The screws holding the bracket to the wall had fallen out, and there was nothing to be done; soon, that part of the curtain rod would be removed altogether, to wait for someone who could patch the wall and re-do the curtain rod. We have not been held accountable for all this, yet.

Currently Reading: The Classic Era of American Comics, Nicky Wright. I feel like there's just something ... not ... quite there, in Wright's research. Like, the book is old enough I can't fault Wright for repeating Bob Kane legends about the creation of Batman; Kane did a good enough job establishing a creation-mythos that even a diligent researcher might not realize there was something more there. But, like, there's a mention to the Green Hornet comics that reads like Wright was unaware this was an established radio character brought into the comics. There's also a mention of Our Gang comics, based on ``a series'' of M-G-M comedy shorts. Which is literally true but, like, I'd think especially anyone reading this book would know them as ``the series'', or at least would know them if prompted that the series was titled The Little Rascals for TV.

PS: Stepping through the gates of Six Flags Mexico! Yeah, this is going to be a lot of photos of this one day. 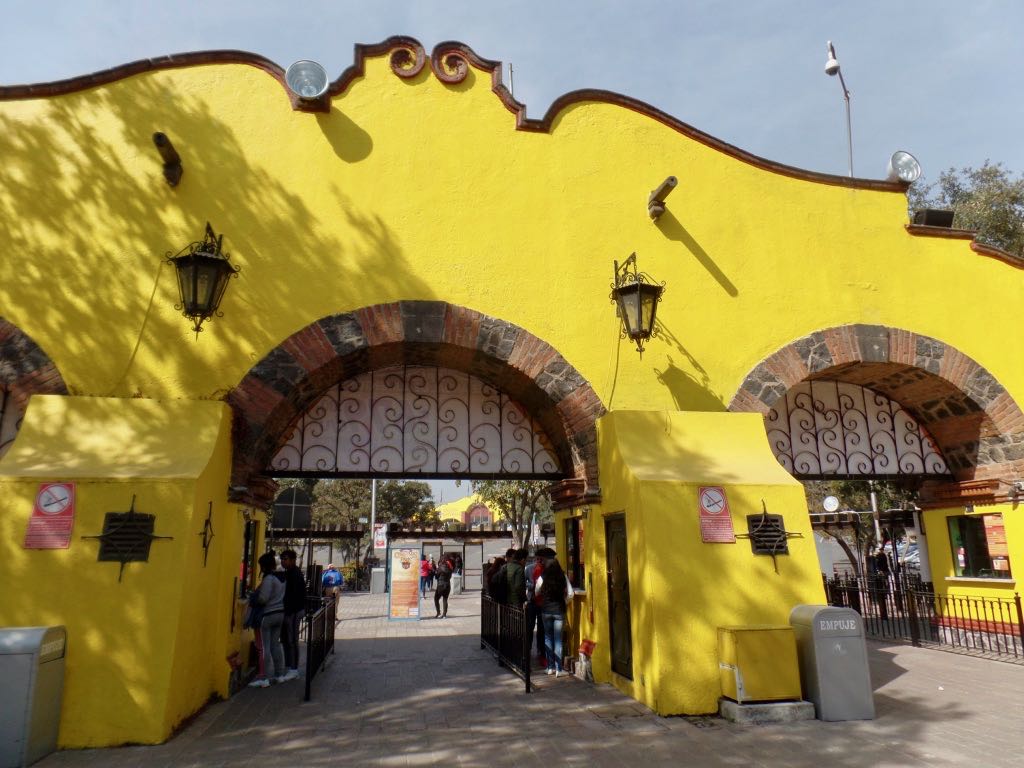 The other side of the park's entrance is not so interestingly signed and also makes me think of Casa Bonita for some reason. 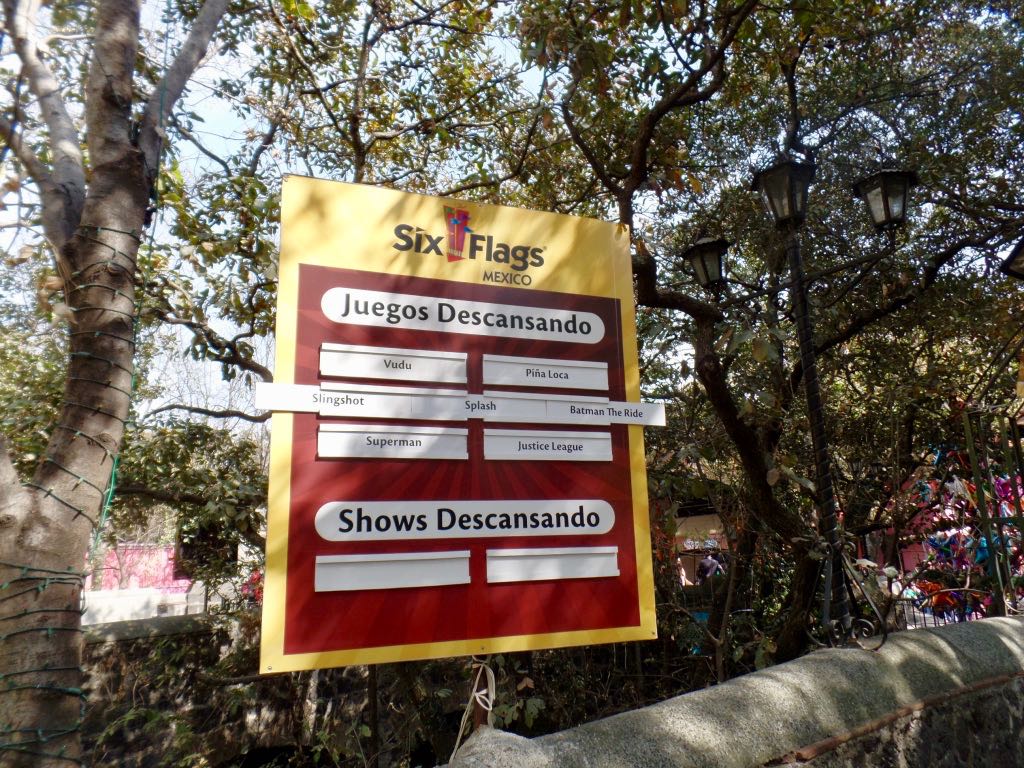 While ``juego'' may mean literally a game or a play (there's just no way to know for sure), it also covers amusement park rides, which doesn't seem like a great etymological leap. So these ``resting games'' were the warning of what rides were out of operation that day. 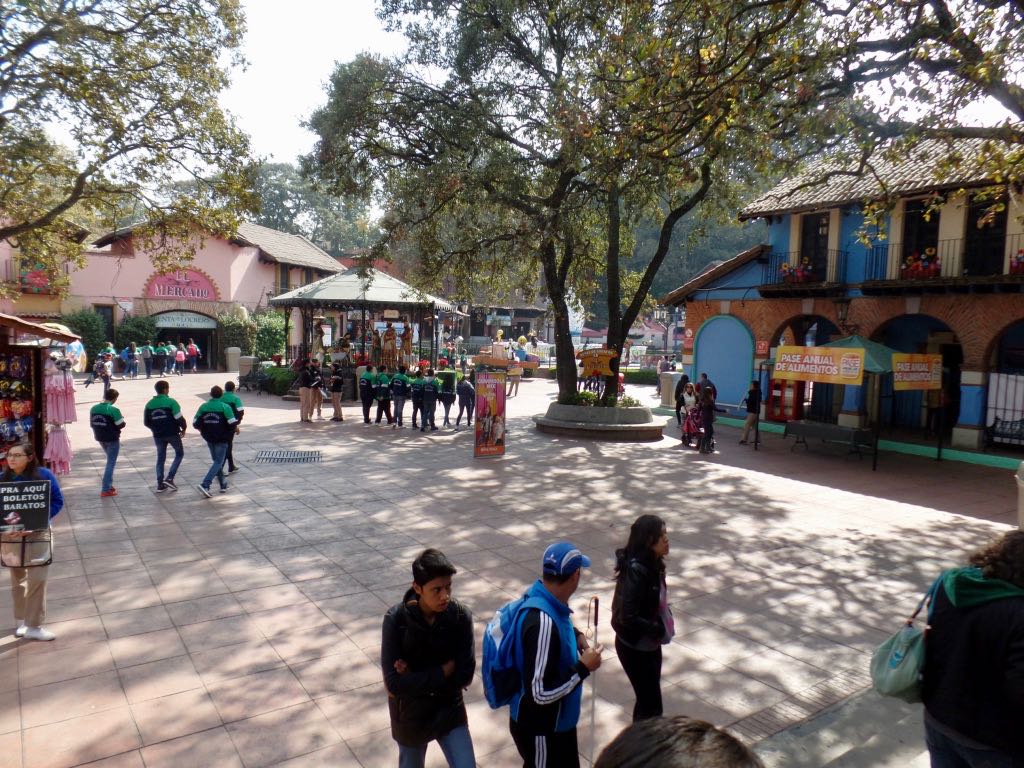 Entrance plaza, with a couple of shops and the teacup right right up front. Note the guy on the left selling the ``cheapest tickets'' for the Ghostbusters laser-tag game.