Gathering for the Fursuit Parade was set for noon Saturday, and the parade itself for 12:30, as is traditional at Morphicon/AnthrOhio. We are late risers, and often slow risers. I went downstairs to hospitality to get

bunny_hugger something (a granola bar?) to snack on before she got her suit fully ready, and we were late. Like, last-minutes-of-the-gathering late. Apparently they took the group photograph before the start of the parade, inside the Main Events ballroom, and before she even got there. Hm.

I had a few minutes to work out a parade-viewing location and I haven't got the hang of the new hotel yet. I also didn't see a map showing the planned parade route. I settled for a spot that seemed likely, overlooking a corner and with the door behind my back. Sun behind you, fursuiters turning a corner, that's usually a good spot to go. It turned out to be a pretty good spot since the parade route threaded through the first floor of the convention, around the garden square in the middle, and back past where I was. I assumed they would be going out of doors from there, since it was a nice sunny day. Maybe it was too warm: instead, they went back down the hallway towards the Main Events ballroom. If the parade were not ten minutes long this would be fine, but it meant the tail end of the parade --- including

bunny_hugger, who always hangs near the back so she's not left hanging out waiting for inaudible instructions for the group photo too long --- met up with the front end going the other way. This would do much to confuse anyone who could barely see where they were going and just hoped to follow the big fuzzy thing right in front of them. Even some fursuiters with decent vision were confused by the parade going the other way on their right. Maybe the weather was too warm or there wasn't enough clear parking space. Maybe there were too many puddles in the parking lot for it to be safe for suiters.

There wasn't any gathering outdoors; people just broke up into photography opportunities on their own and indoors.

bunny_hugger gravitated naturally to the Pipsqueakery's tables, and their many rabbits, waving at rabbits who while quite large are not her-size large. At her urging I went into the enclosure, to pet the lop rabbit and the New Zealand white and what other rabbits would put up with me, and she loved watching what she was pretty sure was me interacting with what she was pretty sure were rabbits. Her visibility, again, not the greatest. I had thought she might get in the enclosure herself, in suit. She didn't think she had the visibility or, in suit, dexterity to do that safely, and she's probably right.

We had just enough time to un-suit, and get a snack and a pop, from hospitality --- you're allowed to take food and drink from the hospitality suite at Anthrohio, probably because everyone at the con's welcome to it, or at least nobody stops you --- before getting to the board game room. Our scheduled game of Betrayal at the House on the Hill was up. We've played the game a fair bit, usually with our pinball best-friend MWS, sometimes with

bunny_hugger. That is, in groups of at most four players. This would be a rare chance for us to play in a six-player group, the most you get. Some of the people were new, and this had a minor effect in the game. In the game your party of horror-story-type characters explore a bizarre haunted house. Then at an event, the Haunt, it (usually) turns into a one-player-versus-everyone-else contest. The first time this event happened, the one-player, the traitor, turned out to be someone who was playing this for the first time. She didn't feel confident she could do the role, even with the game room host's assistance. So we just carried on as if the Haunt hadn't happened then, and let it happen later.

Also a curious little bit: when we play with MWS he plays the same character. Like, every time. Ox Bellows, a high school athlete with interests in football and shiny things. He's not got much intelligence, but he's pretty sane, and both strong and fast. We weren't going to be committed to that today. I like to pick a character by a random draw, to keep from playing basically the same game every time. So I drew from the character cards and ... oh, it was Ox Bellows. That'll happen. As the Haunt developed it was the traitor with their not-actually-a-pet dragon against everyone else. And it turned into a bit of a slog: everybody but the Dragon and Ox got killed. We went several rounds where Ox didn't roll hits strong enough to damage the dragon, and the Dragon didn't roll hits strong enough to overcome Ox's shield and armor. (There's magic shields and armor in the haunted house, as you would expect.) The guy playing the dragon suggested, if we don't make any progress in the next three rounds let's call it a draw, and I agreed, as did the players of my now-dead teammates. And then next round what do you know but I rolled a massive hit, and the dragon almost no defense, and we won! ... Once again thanks to Ox Bellows, whose strength really makes up for not being all that smart.

By now it was midafternoon and we had not had any actual food. And, fortunately, a Skyline Chili that was maybe a half-mile away.

bunny_hugger really likes Cincinatti chili, and fast-food Cincinatti chili has finally grown into the Columbus area. We could have a quick but not rushed meal, since we hit at the time of day nobody in the world is getting fast-food chili in Columbus. Also we got to pass that curious Continental shopping mall/apartment/movie complex, the all-but-abandoned quasi-utopian development we'd discovered last year, with the movie theater whose dot-matrix display signboard still claims that they're showing, like, Scary Movie V and Oz The Great And Powerful. You'd think someone would give them the password to update the sign eventually. It's such a little wonder, among may in the world.

Trivia: Among the pieces Benjamin Franklin wrote while negotiating the Peace of Paris was The Morals of Chess. Among its dictates he warned that a piece touched must be moved, and a piece set down must stay there. Source: The First American: The Life and Times of Benjamin Franklin, H W Brands.

PS: And now we finally get to Medusa Steel Coaster and my 200th ride, right? Almost? 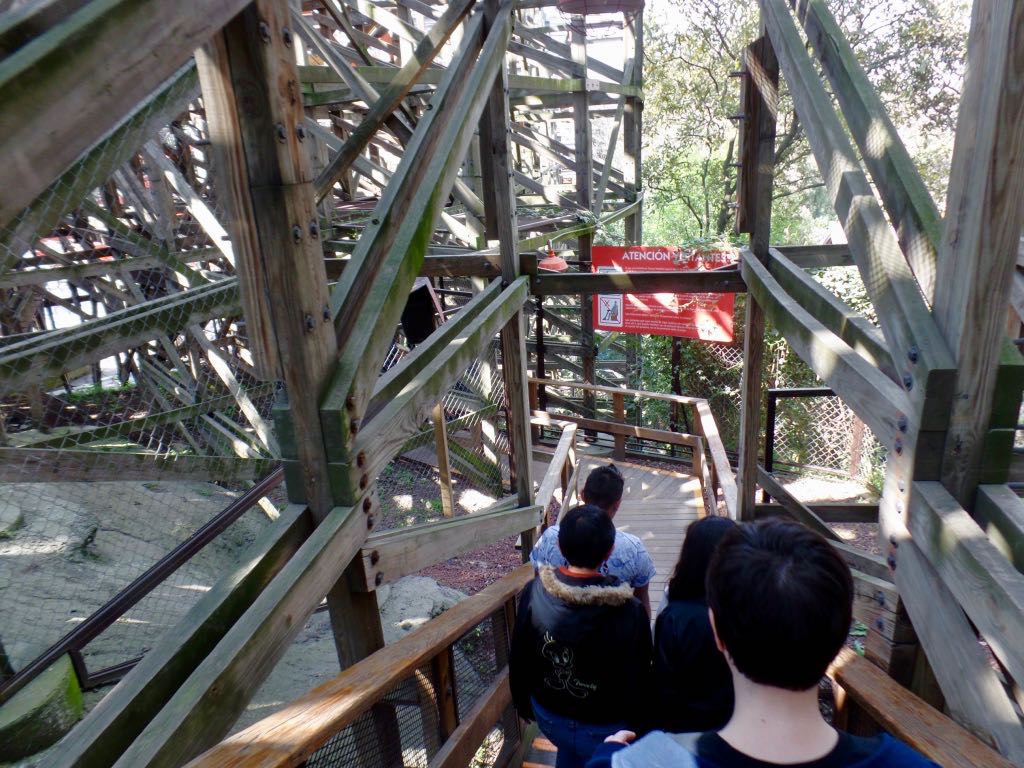 And more steps down as the queue path continues. The sign outside had said there was a 15-minute wait for the ride and we were never clear if that counted just how long it takes to walk from the entrance to the launch station. The wait once we got to, like, people standing was not very long. 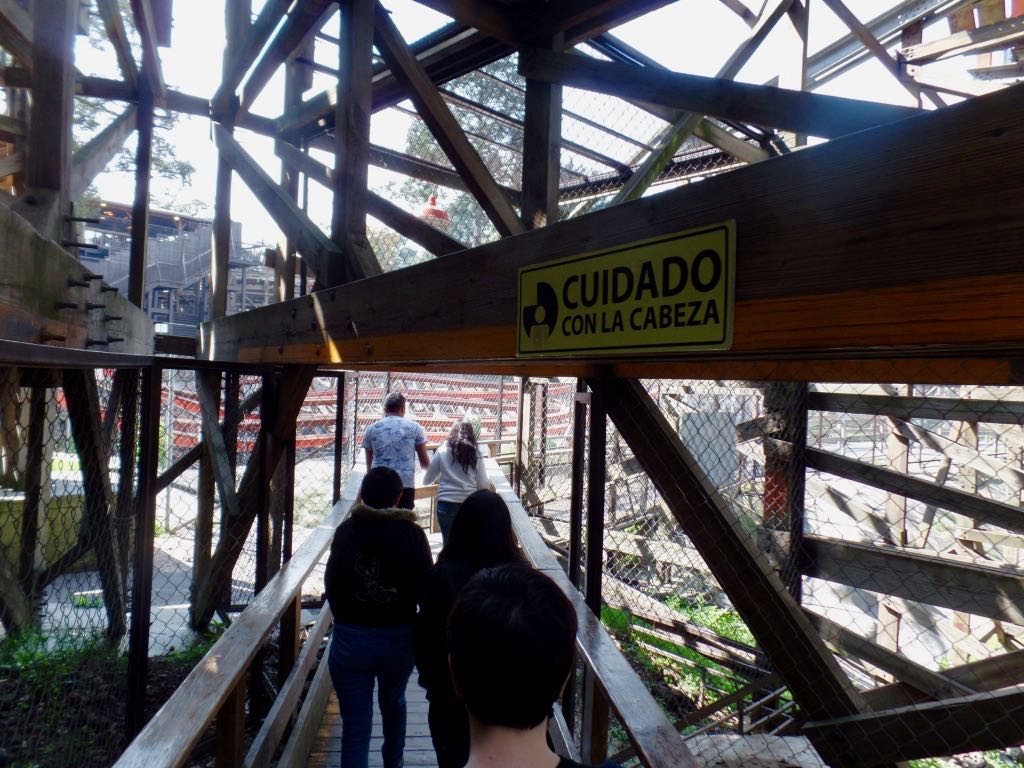 I understand the sign is trying to keep me safe but a long history of watching Looney Tunes has just made this pile of words an automatic giggle from me. 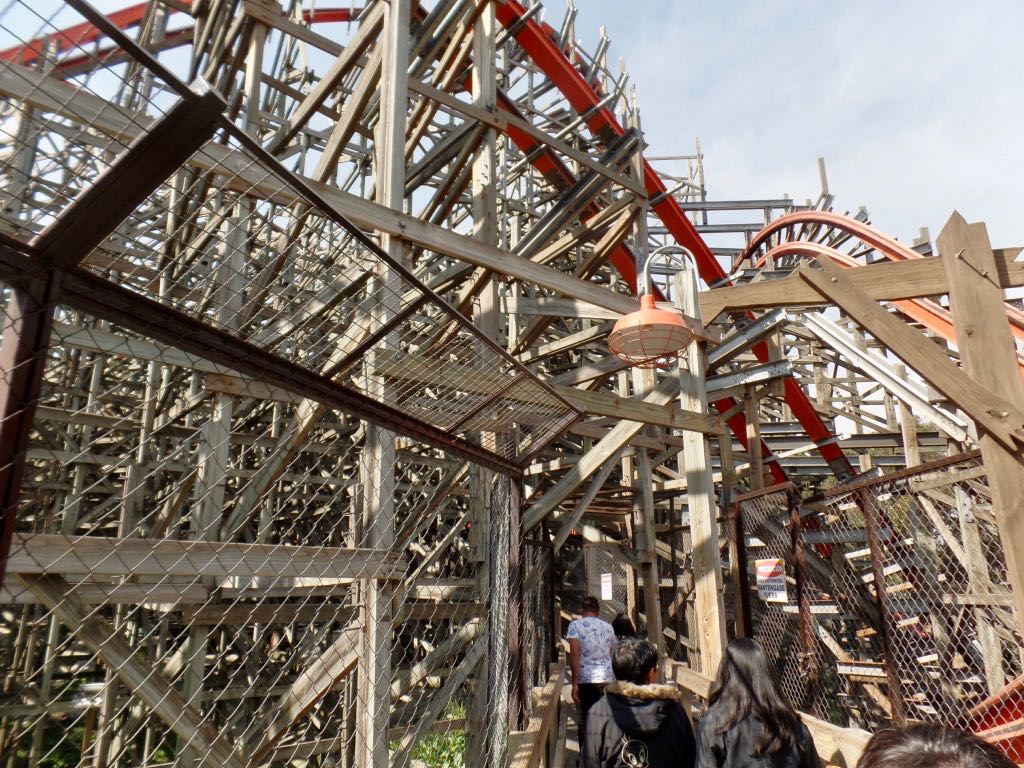 Yeah, see on the right there, where the track twists to the vertical and then upside-down? That's what an RMC conversion is all about.