AnthrOhio 2019 was not done, not precisely. There were still some things going on. The Foam Flinging Frenzy, the massive capture-the-flag battle with abundant Nerf weapons. It seems like fun, for someone younger than me who doesn't need to plan out how many times he's going to kneel during the day. More, the Dead Dog Dance, the final dance of the convention. This

bunny_hugger went to in her dragon kigurumi, while I went in my red panda outfit. This was a sparse but satisfying dance, and then I went and blew things by saying I needed to get some water and go to the bathroom.

bunny_hugger joined me, and by the time we got back (she finally got the soap dispenser to work) the DJ was announcing his last song for the night. Not that it would have been long enough anyway, but we did lose a good five or ten minutes to stuff that, really, could have waited.

What else was open? Karaoke, now playing in the room next to board games. The board game room, where they had already taken apart the jigsaw puzzle and put it back in the box. Many of the convention-goers had left, or had retreated to room parties; there wasn't much going on. We picked out a card game, Fox In The Forest or something like that. It's a two-player game, the goal being to win tricks by matching or beating the card the other player puts down. The cards have fairy-tale themes, trickster foxes and wicked queens and all that. You get more points for each trick won in a round --- up to a point: if you win too many, you were greedy and you get no points for the round. So our first round, I was doing badly enough that the alternative strategy presented itself: if I could force myself to lose one more trick,

bunny_hugger would get zero points and I'd get three and at least something would come out of it for me. Didn't work; she had just enough tricks to get six points on the round for that. The game was pleasant enough, and while we were playing we heard a particularly raucous version of Journey's Don't Stop Believing from the next room. This we later inferred was the last song of karaoke. We hadn't had any particular idea what to sing, but really, we should have gone to karaoke first and then board games.

So AnthrOhio was really wrapping up, all the public spaces closing down and activity rooms putting stock away. We walked around, with the puppets some, looking for what to do or who to do it with.

bunny_hugger and I are privileged to have jobs that are pretty time-independent: we can almost always just go do a thing. Furry conventions are about the only times we're faced with ``this is our only chance to do this thing. Did we do enough?'' ... And mind you, this was a convention where we were always doing things. We had a little down time, but not so much, and nearly all of what we were doing was great. But it's natural to want a little bit more on top of all this.

It's also natural to want supper. We were far too late in the day for Hot Head Burritos, or a third round of Skyline Chili. What might be open after 11 pm on a Sunday? I looked up White Castle, since Impossible Sliders are now such a common and well-liked thing that there've been shortages, and learned that we would find one going in basically any direction. The very nearest one was already closed for the night. But there was one a couple miles south, in the heart of Columbus, with surprisingly good Yelp reviews and people talking about how it was a place to go and see. ... So we set out pondering the idea of a Destination White Castle.

While we were mostly taking the Interstate downtown, our exact exit was one of those melanges of on- and off-ramps and somewhere I took the wrong turn, so I tried to keep up with a frantically recalculating satellite navigator. And then we hit High Street. Which was busy and crowded and full of people and construction. I quipped, ``Hey, look, it's the 1-up Arcade,'' because of how much the street seemed like the similarly way-too-packed-for-a-Sunday-night strip in Denver last year. Bur it had much the same dynamic, the until-recently run-down part of town that's suddenly become all hip and trendy. Among them: a big, gleaming White Castle on the corner, with patio seating(!) and an apartment building built around it, plus parking deck, and a (closed) drive-through that goes a tight loop through the parking deck. After failing spectacularly to find street parking, and having to navigate around crowds and construction to turn around and leave

bunny_hugger traffic-anxious, I parked in the garage in White Castle Customer Only parking.

So this White Castle in downtown Columbus. It was pretty big for a city fast-food place. Also it had a dining patio. And shelves of souvenirs. Also a beer and wine list. Also, in one corner, a time capsule intended to open in ... well, I think it's 97 years, now. Also no partition between the dining area and the kitchen area, so you can watch at least the grilling and final prep work being done. Being open about food prep has always been a selling point of White Castle --- the white in the name is part of their 1920s-origin, see-we're-not-adulterating-the-food branding --- but at least I'm used to the kitchen being behind plexiglass barriers. Here there was nothing but air. Also what the heck is all this? ... They were doing good business, as you'd think a still-cheap fast food place surrounded by all the bars in the world might be doing on a busy night. We got a mix of regular Impossible Sliders and Barbecue-flavored Impossible Sliders, plus some pop, and drove back to the hotel wondering what that was all about.

The barbecue Impossible Sliders were fantastic. The regular sliders were almost as good though, featuring, like, fresh tomatoes and arugula and just ... made way better than you expect from White Castle. Impossible Sliders usually come out pretty good, as they're made to order. But this was that extra bit more ... professional.

The story. Turns out that White Castle is headquartered in Columbus, and has been a long while. The White Castle on High Street where we went had been one since the 30s, and was one of the oldest still operating. It was there when the neighborhood was bad. A nearby document-storage warehouse would let cops park there free, so the cops hanging out at the White Castle would be nearby just in case anything happened, thereby reassuring customers that yes, their documents were securely stored. (The warehouse building is now, as you'd expect, bars and loft apartments.) And this was ... well, one of White Castle Corporate's testbed places, a spot to try out things before they went to the whole chain.

So with the gentrification of the neighborhood, the old White Castle had incredible value in its land and its air rights. And White Castle renovated the lot, turning it into your standard mixed-use facility with the flagship White Castle location and loft apartment and all of that. Thus the time capsule due to be lost and forgotten in a century's time. Some pieces of the old building were turned into signs and decoration of the patio seating. In short, this was a White Castle with a history and a mission.

And it was therefore, as promised, a destination White Castle.

Trivia: In a Washington Post article published December 1901, Henry Litchfield West forecast, ``if only the same proportion of increase is maintained, the year 2000 will see a distance of 600 miles covered in an hour --- the journey from Washington to Chicago occupying only 70 or 80 minutes. This seems incredible, but it is not more marvelous than it would have seemed in 1800 to suggest that the 40 miles between Washington and Baltimore ould be traveled in 40 minutes.'' Source: Taking Flight: Inventing the Aerial Age from Antiquity through the First World War, Richard P Hallion. 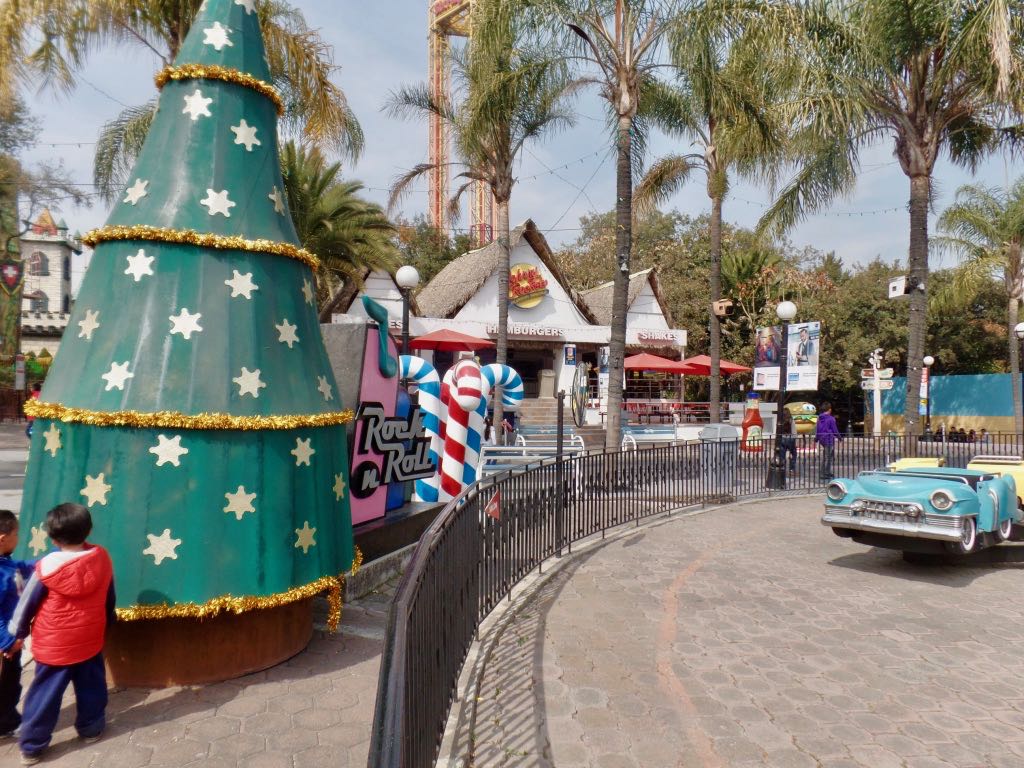 Metallic Christmas tree set outside the sign for the Rock-n-Roll (a Scrambler with Vaguely Late 50s car bodies) and a Johnny Rockets, so I think they're really getting the United States theming down perfectly here. Notice over by the Johnny Rockets the big statue of a burger with eyes. 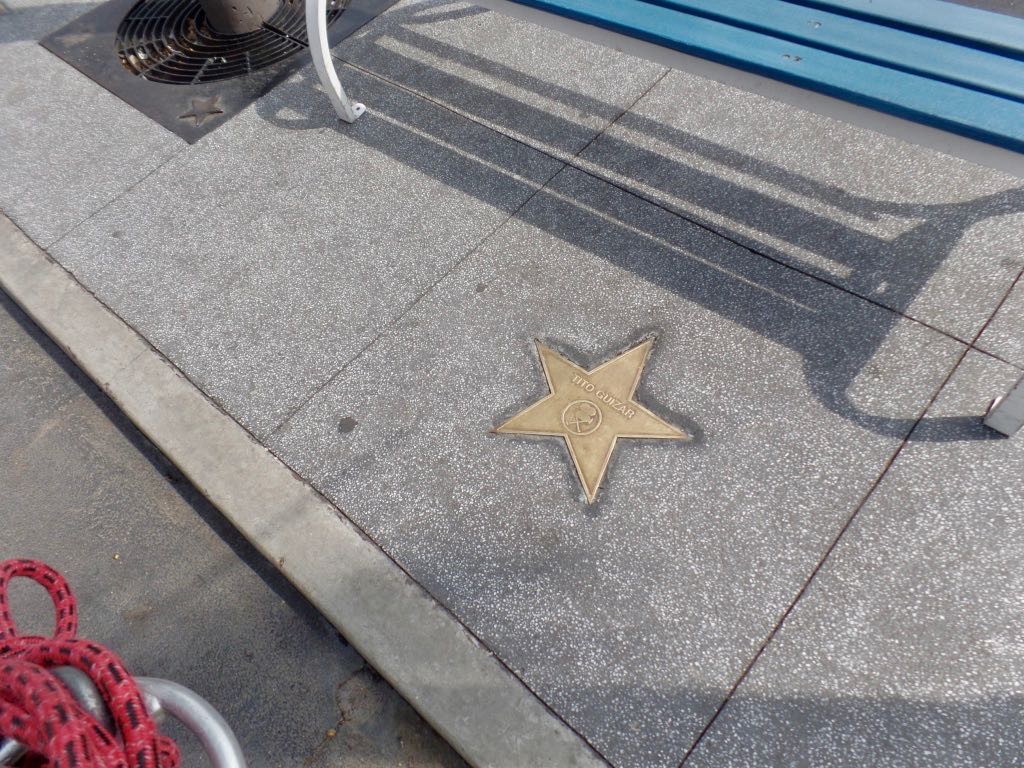 One of the stars on the Six Flags Mexico Hollywood Walk of Fame. Tito Guízar was a singer and actor who performed for seven decades, in American and Mexican movies and TV and radio. 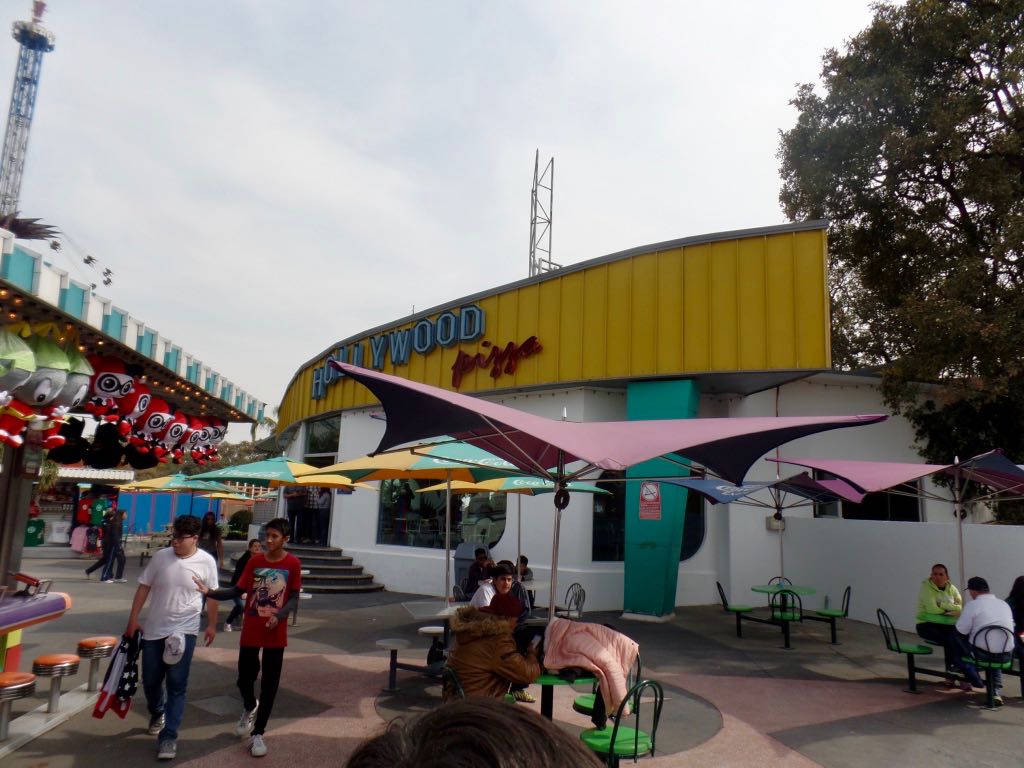 Hollywood Pizza, a name less baffling than Six Pizza, and the promise that sure, we'd be able to find something vegetarian to eat.