I was tempted to move my car up slightly closer to the rear entrance of the hotel, Monday morning, for slightly faster packing. But the bizarre charm of going the whole weekend with using just one parking space appealed too much to me. This is what's wrong with my sense of humor. We got out of the hotel room late --- I'm pretty sure the housekeeping lady was getting anxious at how it was a quarter past 11 and we were still going back in to get stuff --- but that's all right. What did we have to do?

How about letterboxing? We brought our kits, just in case we had some spare time and something in the area. There was, too, by a cancer clinic and a pet hospital not far from the convention hotel. These letterboxes were very easy to get, thanks partly to it being Memorial Day, so nobody was looking to watch us prowl around the edge of a parking lot finding secrets. We brought the boxes back to the car and discovered a hitchhiker, too, a great little bonus.

And a bonus on the bonus. While we sat in my car, working, a local cottontail rabbit popped out of the woods. As we watched the young rabbit (it still had a spot of white on its forehead, a sign of youth) prowled around some. It rubbed its chin on, marking, some fallen branches and twigs and such. And then --- somehow I knew this was coming --- it diggety-diggety-dig-dig-digged up a little bit of dirt and flopped over on the side, just as our Sunshine does up to fourteen times an hour. The wild rabbit got right back up, then diggety-diggety-dig-dig-digged up some more, and flopped again. It was gorgeous. And, with the little cloud of dust raised around it, the rabbit gave us an idea why a bunny might flop. It looked like it was taking a dust bath. I don't know that this is the motivation, but it makes sense at least. We watched the rabbit a while, until it went back in the woods, and we replaced the letterboxes.

This turned what should have been a quick letterbox stop into a medium-sized one, but for good reason. It was well into lunchtime and so we figured to go to Hot Head Burritos for one last trip there and .. oh. They were closed for Memorial Day. Inconvenient. I suggested Skyline Chili, since we knew another one that we'd pass just north of there. That seemed like too many Skyline Chili visits just now. But White Castle? --- Not the one in downtown Columbus. One of the estimated 26 billion in the Columbus area. This one, too, had the barbecue Impossible Sliders --- we feared that might be something they were just testing at the downtown location --- and while they weren't quite as good as the ones from the High Street White Castle, they were great. We had the chance to talk them up to another customer, who was skeptical of the whole Impossible Sliders thing, when the person assembling them would just say that they were decent and one might like them.

Doing nothing but driving north would be dull, and we couldn't stop at Coons Candy as that too was closed for Memorial Day. We considered going to the Columbus Zoo, and the amusement park it's absorbed. But then ... we also always see the signs for the Olentangy Indian Caverns, a couple miles north of Columbus. It looked like a classic roadside tourist trap. We were tempted. When

bunny_hugger found a news report from a few years back about the place narrowly escaping having to close we were convinced. We had to go there.

We imagined a sleepy little roadside attraction with some modest bit of historical or geological importance. It was not. The place was hopping. Apparently one default field trip for schools in the Columbus area is going to the caverns. And while it was a holiday, it was also a bright sunny early afternoon, and the place isn't expensive, and what are you going to do with a pack of kids? Holes are good for that. Also a petting zoo and miniature golf and playgrounds and stuff.

We figured to have enough time for the cavern tour and miniature golf. Not enough for the petting zoo. But outsize the zoo they did have some chickens roaming around, and some kids roaming around trying to touch as many chickens as possible. We heard one parent telling his kid, ``I'll give you $5 to touch that rooster''. He raised the offer to $20 without the kid accepting.

bunny_hugger was happy to just be around chickens, offering them food from the vending machine, and not pushing them to do anything particular. There were also a couple small buildings with labels like the Hare Salon and the Lucky Foot Tavern, which were the indoor retreats for a couple bunnies whose outdoor area was inside the petting zoo proper.

You enter the caverns by going into a building. This seemed odd to me. But when the caverns were developed into a tourist trap in the 1930s they built a museum above the entrance, and stairs leading down into the cave. A fair distance too; the stairs lead, in three stages, down about sixty feet, and the caves go down another forty feet or so past that. Great going down; going up, everyone breathes heavily.

The caverns were, the tourist trap claims, used by the Wyandot people, probably as a meeting place and workshop. The guide pointed to several spots where smoke serves to prove use. Also a deeper ravine where, allegedly, an underground lake and cave fish were found. The cleaning out of mud and laying down of cement floors, used to make the place accessible to non-spelunkers, left the lake inaccessible. This seems like a snarky statement about the basic insanity of modern life, but there you have it.

The caves are, according to reviews from people who visit a lot of caves, not exceptional. A bit small, without any grand stalagmites or stalactites. To us, who could not attest under oath that we had ever been in a cave, it seemed just fine. There was a nice spot with some honeycomb stalagmites, this formation that was growing with a neat pattern that evoked just what's in the name. Some steady dripping. A great fear of accidentally touching the walls and screwing up centuries of cave development. A narrow crevice called Fat Man's Misery, which the guide said there was a bypass for but which she promised no one had ever gotten stuck in. I thought it would be close for me, but no, it really wasn't.

Really the most exceptional thing about the caves was how much they looked like, well, the caves you get in surprisingly many Star Trek episodes. Some of that is the floor, which was man-made, cement poured to flatten the place out. But that doesn't affect the shape of the walls or things like that. Also there were supposed to be spots where early white explorers carved their names in; we forgot to look, when we went past there.

After the cavern tour our group was left to wander around the one-room museum atop this all. They had a pretty good tourist-attraction mix of stuff: rocks, some of them relevant to the local geology, some of them just, like, Petosky stones or ``pre-Camberian coal'' according to the label. A 1935 newspaper announcing the opening of the caverns. Miscellaneous bits of American Indian history, including a portrait of and vest worn by Bill Moose Crowfoot, ``believed to be the last Wyandot in the state of Ohio''. The jaw and legbones of an ox, matching an early white explorer's story of finding the caves when his ox disappeared overnight and found it had fallen in, where it could not be recovered.

After wondering at all this we went to the miniature golf.

bunny_hugger had bought a round of miniature golf when we got cave tour tickets, as part of a long queue that wended through the gift shop. She had the assurance we could play golf after the tour, just come up and say when we were ready to go. We were worried they would have no idea whether we had actually paid when we came back hours later to, it turned out, a different cashier. No trouble, though; they took us at our word that we had bought a round already. Possibly we looked trustworthy.

Reviews of the Olentangy miniature golf course described it as being really old-fashioned. That's exactly our speed. And it was so. Not quite as deeply weird a course as Kokomo's, but pretty close in spirit and weirdness to Conneaut Lake Park's. The most peculiar little thing is the scorecard had no par written on it. So this added an extra game to our game: sizing up each hole before we played to judge whether it should be a par two, three, or maybe even a four. While neither of us came out close to par, I think we came to a pretty fair assessment, of about how many strokes you'd need to play if you played perfectly.

Much of the miniature golf course has, well, American Indian decorations. Tiny versions of cigar-store Indian statues. Totem poles, a thing we're pretty sure nobody anywhere near Ohio used. Benches between every hole, which were great, but which were made of cement. The mould was patterned to look like wood, although they were painted white or, in one case, pink. Small cement houses, sitting on a disused wooden cart. We were the right market for this.

After poking around the gift shop ---

bunny_hugger bought a fossil she didn't think came from anywhere near the caves --- we figured it was late enough we needed to get on the road. We would take the drive north, following the satellite navigator even though this way at least we didn't really need it, to

bunny_hugger's parents' home, for a small dinner (her father was showing off his frozen-pizza-heater, which does work pretty well at that) and the chance to pick up Sunshine. We spent the night in our bed, everything back where it should be.

Well, almost. We left behind the plastic ball in which we put Sunshine's food pellets, giving her the chance to exercise and play as she ate. But we'd be able to recover that the Saturday after ...

PS: Now let's get into my third hundred of roller coasters. 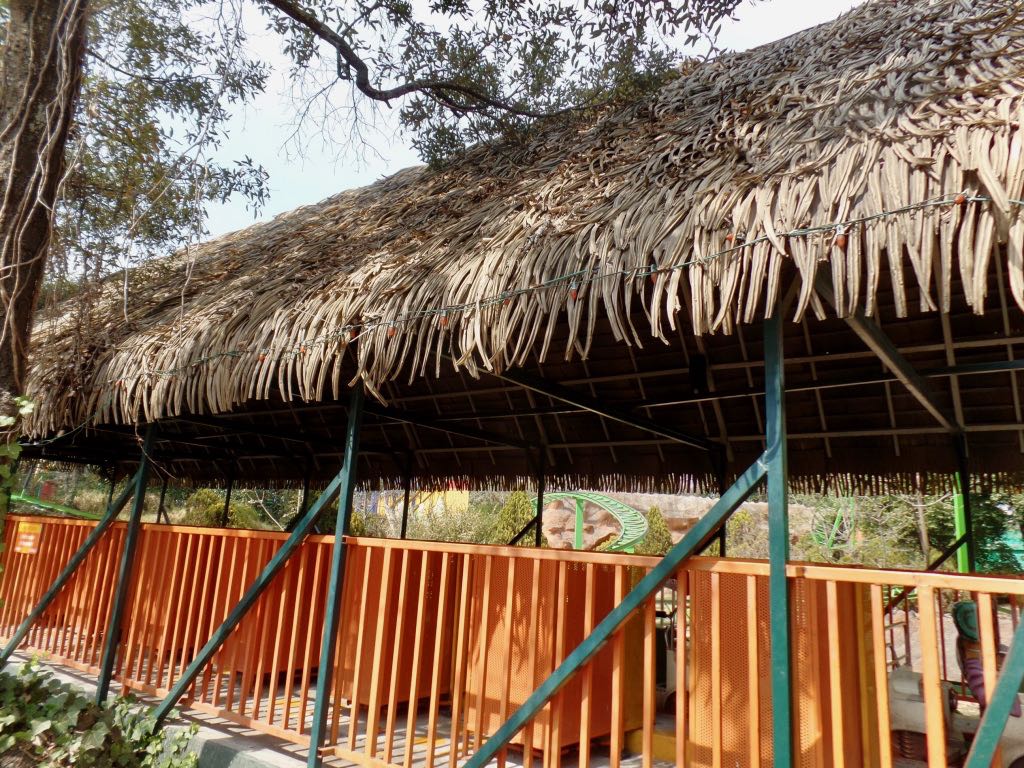 Tsunami, one of the smaller --- and older --- roller coasters at Six Flags Mexico. It's in the Polynesian themed area, thus the 'grass hut' look of the launch station. 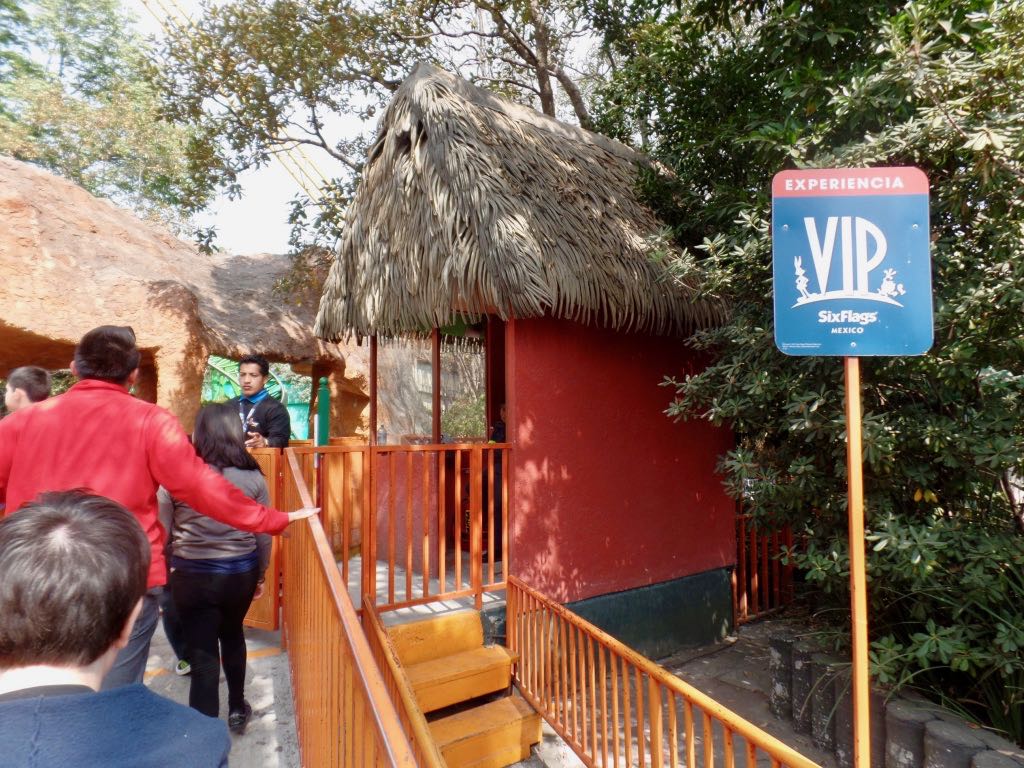 Six Flags Mexico has one of those line-cutting upcharge schemes, this one the VIP Pass. You might giggle that Tsunami, a 26-foot-tall roller coaster originally installed here in 1981, might get a line long enough to be worth cutting, consider that it is exactly the sort of ride families can take kids onto without anyone feeling too scared, while still being a fun and real roller coaster anyone might appreciate. 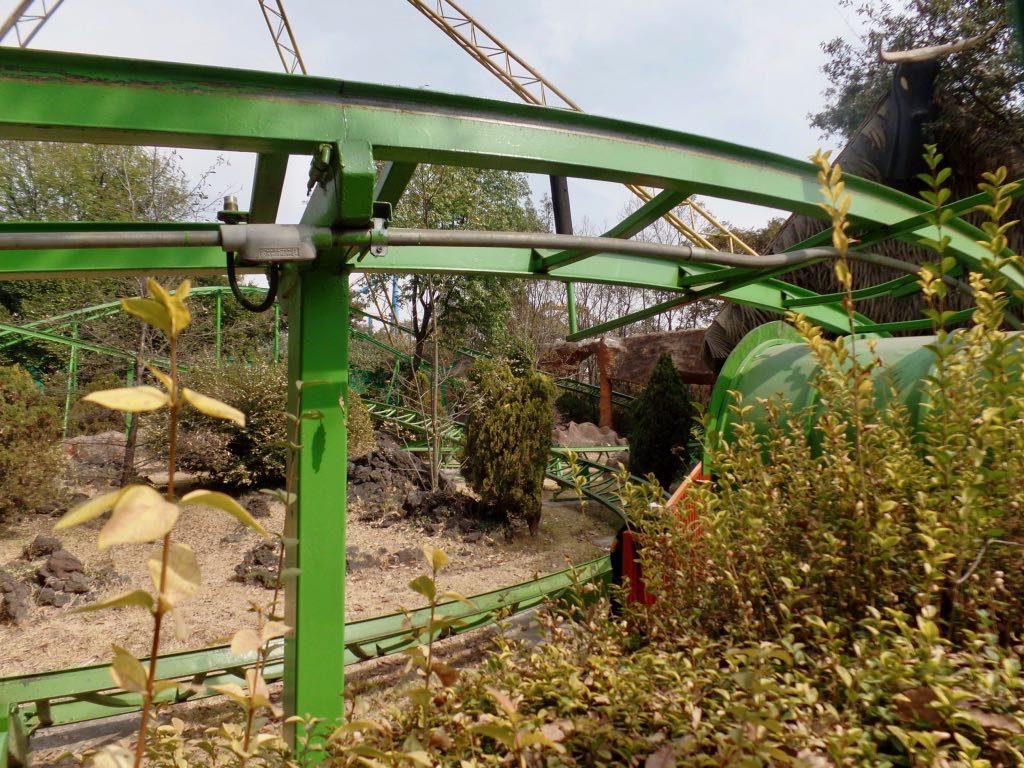 Some of the loops of Tsunami, which has got a nice mass of local plantlife around. This makes the ride feel a bit faster and more exciting without needing the coaster to be any faster or scary to riders.