bunny_hugger. Thank you for making so many happy years with me, and may there be many more to come.

Wild[e] Beast[e] is in the Medieval Faire part of the park, a pretty well-done set of themed rides. Near it is the park's biggest roller coaster, the gigacoaster Leviathan. This means its peak is between 300 and 400 feet high. This was only my second gigacoaster, after Millennium Force at Cedar Point. As the name implies, it's got a great sea-monster theme to it, with a gorgeous three-dimensional sign out front. And the cars have this neat scaled pleating to suggest a sea serpent.

The ride had a bit of a wait, although nothing like what we'd expect from Millennium Force. It was a maybe twenty minute wait, which is just ... nothing. We had some worries that the first nice day after a couple rainy days would see the park packed, but no. Or at least not packed beyond what rides could take. Nope. We just had a really good day of riding conditions.

It's a fine roller coaster, and --- rather like GateKeeper at Cedar Point --- much of it runs along the front of the park, as if it guarded the gate. The theme is fantastic too. If something's wrong with the ride, it's that it feels short. Which is strange. The Roller Coaster Database claims its length at three minutes 28 second, by any standard a quite long ride. The ride video takes two minutes, though, and much of that is the lift hill. This matches my impression. We did spent time in the gift shop where they didn't quite have the sea-monster T-shirt that I'd want to ride. But they had some that were close. A lot of shirts I'd be all right with, anyway.

Our next goal was the Dragon Fyre roller coaster, so we got diverted on the way. Among the flat rides in the Medieval Faire section is Spinovator, a name that does not fit the theme in the slightest. It's a Calypso-style ride, four cars on an axis that spin around, on a large disc that itself spins around, and that's on an incline so the cars are gently rising and falling. Cedar Point has one, now re-named the Tiki Twirl. Canada's Wonderland's, though? This one had cars with the shape of barrels, or at least cut-open barrels.

bunny_hugger recognized this, solving the mystery of an ancient recollection. She remembered being at a park, as a child. One with a Calypso, one with barrel-themed cars. She rode it, a lot, as one of the handful of park rides that she didn't find scary. (The Calypso is very like the Scrambler in its motion, something that's exciting without intimidating anyone.) She remembered the name: Friar Tuck's Buckets. She had never been able to find this ride, to pin down what park it had been at. But now? ... Spinovator is an absurd name for the ride --- not because it describes the motion badly, but because it doesn't fit the theme. Friar Tuck's Buckets? That is a name that perfectly fits the theme. The ride was there from the park's opening in 1981. And a park she had been to once, as a child, and that she got mixed up with the similar Kings Island? Definitely. We hopped into the queue for a ride on this old friend rediscovered.

Except. Spinovator got that name in 1997. Before then, according to Canada's Wonderland, it was named Quixote's Kettles. There's no mention anywhere of an earlier name. Park nostalgia sites have reminiscences of Quixote's Kettles. Nobody mentions Friar Tuck's Buckets.

So what was Friar Tuck's Buckets? And where was it? Could the name be just a conflated childhood memory, shifting Kettle to Bucket? (Consider that in the old days the buckets even had giant ``rope'' handles.) Shifting Quixote to Friar Tuck? It's a set of recollection errors, but none that seem unreasonable, especially when there are food places with names like The King's Feast, and who knows what names there might have been in the mid-80s?

There's no being certain, though. Memory always lies. Sometimes it lies too slightly to need correction. Sometimes it just confounds.

But after that diversion we got back to our real objective, the Dragon Fyre roller coaster. This is another of the park's original roller coasters, and a steel rather than wooden coaster. It was known as Dragon Fire from 1997 to 2018, but it was Dragon Fyre before that. Again with the spelling. It's a simple double-corkscrew roller coaster, the kind that was in vogue in the late 70s-early 80s. That era was when the problem of a looping roller coaster had finally been solved, so a coaster that just goes upside-down a couple times was enough to draw four-hour-long queues. It doesn't draw that anymore. It's almost a puny roller coaster, not least because Leviathan towers over it.

In front of it is another iron sculpture, this one of a bipedal dragon standing on hind legs, wings flared and arms reaching out. Fun figure. I'm glad it's there.

We looked around the Medieval Faire region some, pondering the games and why, for example, something was named Whac-a-Mole II. Or why a game was called Peach Basket on the big sign out front, but Muck Buckets on the small sign giving the price and rules. The answer, of course, is that nobody's worried about perfect consistency in these things. We also looked at the Celebration Plaza, which sounds like it should be a separate area. It's a spot in the Medieval Faire region meant for shows and other public-gathering events. There weren't any shows; we were there too early in the season. Everything had a starting date of, like, a week in the future. But the Celebration Plaza was up next to a pond, and that had a couple families of ducks, including many with ducklings. And that was lovely.

Trivia: Around 1880 the Alpena, Michigan, Echo cut off the newspaper's daily telegraph service, allegedly because ``it could not tell why the telegraph company caused it to be sent a full account of a flood in Shanghai, a massacre in Calcutta, a sailor fight in Bombay, hard frosts in Siberia, a missionary banquet in Madagascar, the price of kangaroo leather from Borneo, and a lot of nice cheerful news from the Archipelagoes --- and not a line about the Muskegon fire''. Source: The Victorian Internet: The Remarkable Story of the Telegraph and the Nineteenth Century's Online Pioneers, Tom Standage.

PS: So I was getting close to the Cuicuilco Pyramid. How would I drag this out? 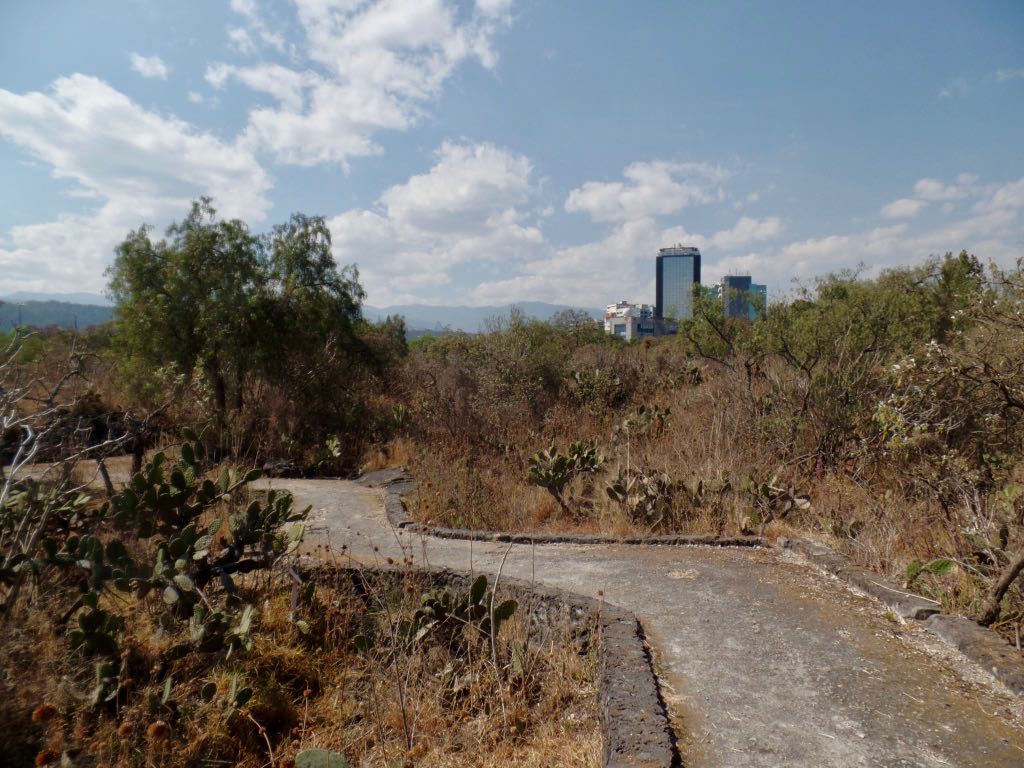 And here I chose to walk along a side trail and totally did not get lost trying to approach the pyramid, I swear it. 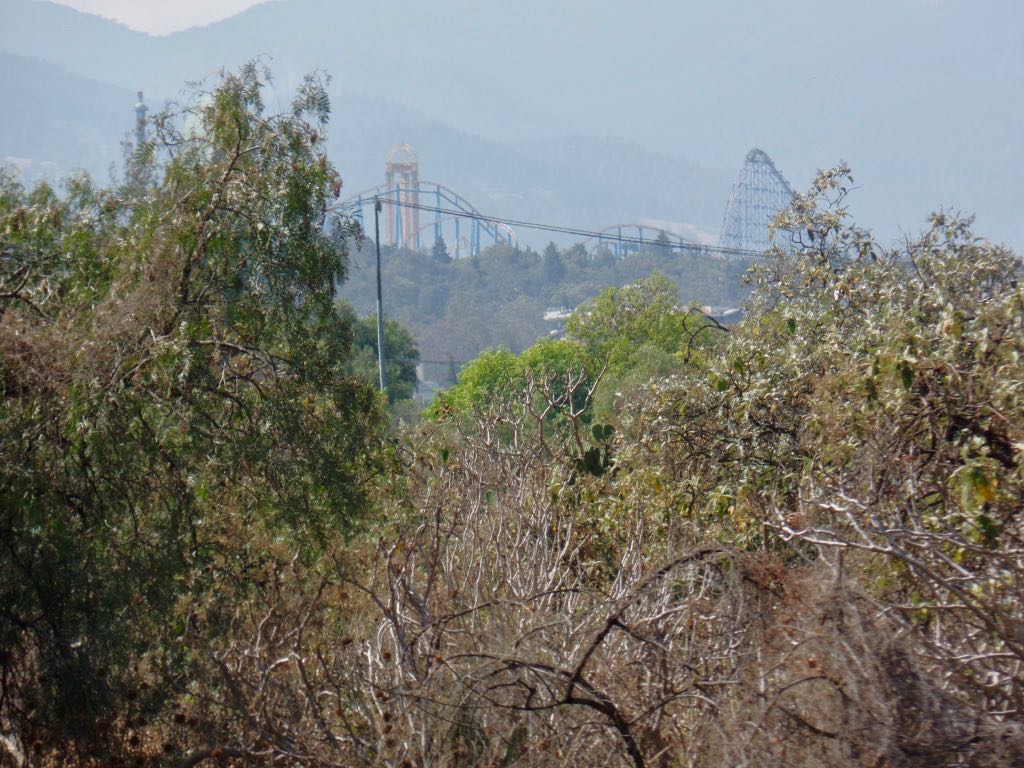 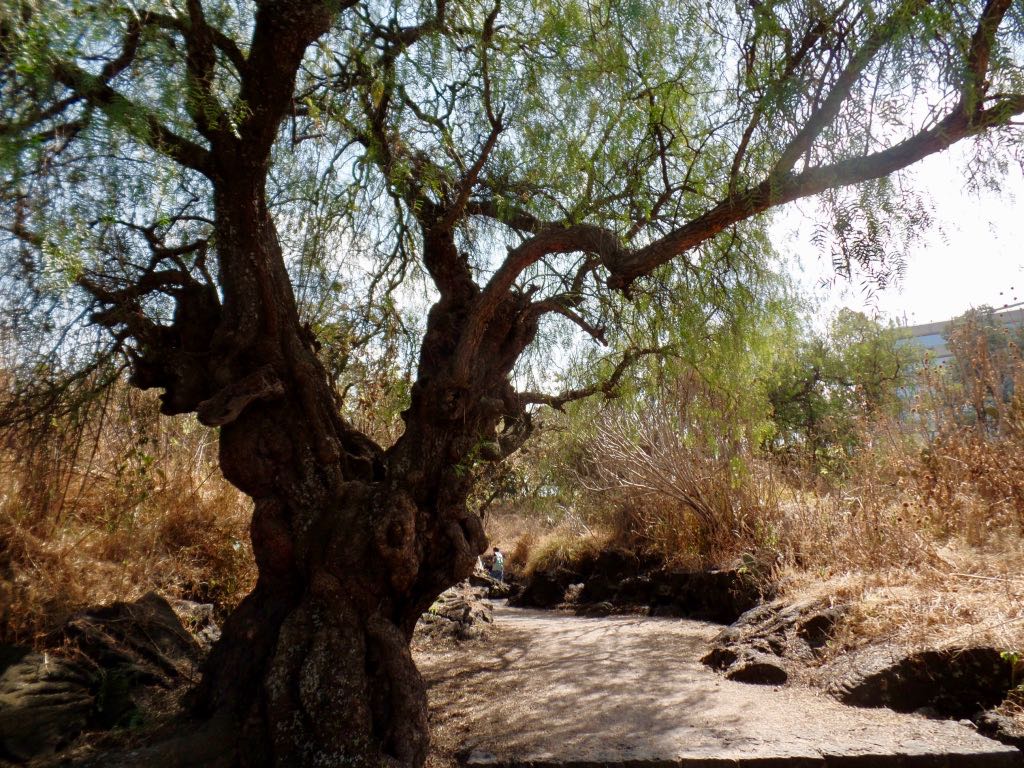 And here's a wonderful gnarly tree that was great to look at and which will be the cover of my 1975 album.