Our visit to Canada's Wonderland was going so very well that we could start taking risks. We could dare their newest ride, the Yukon Striker dive coaster. This was back in the Frontier Canada area. The line --- well, we didn't know how long it would be. None of the rides had signs giving estimated queue times. We did sometimes on the TVs set up in rides see queue estimates. Possibly this is data only available to people using the Cedar Fair app, which would get us right cross. Anyway, despite Yukon Striker being their newest marquee ride --- I think it's listed as the longest tallest fastest dive coaster in the world, and never mind how many qualifiers that is --- the line was not ridiculous. I doubt it was a half-hour to get through, and the queue was nicely decorated with Gold Rush-themed props, like you'd expect.

It's a better ride than ValRavn, Cedar Point's dive coaster. Yukon Striker is a bit longer, particularly, making the ride feel more balanced. And its first dive --- after it holds you at the top, dangling, pointing down before release --- goes into the water. (Their web site doesn't have an actual ride video yet.) Into a tunnel in the middle of a pond, that is, but what you pay attention to is diving into water. Good ride and good use of the environment.

And yet what impressed us was the way they handle personal articles. There's no carrying anything unsecured on the ride and justifiably so. To deal with personal effects they have metal bins dangling from a conveyor belt. You put your stuff in the bin when you're two trains away from loading. The belt carries the bin over, above the track, and back down again to the unloading area just in time for your ride to finish. Ir's a great scheme. It uses ride time well, it means there's no fussing about when you should be loading, and it's neat watching bins of stuff shuttling along. More parks should do this.

Now we could move to the low-priority roller coasters. This would be The Fly, their wild mouse. We'd thought this one a clone of the Mad Mouse at Michigan's Adventure, and while a wild mouse will always be special, wild mouse rides also tend to have very long lines. (They get a lot of riders, and can't carry many in one train, and Cedar Fair, which likes cars stopped and riders seatbelted in, makes the trains launch slowly.) It had a bit of a wait but nothing too bad. And the ride was nothing like Mad Mouse or any other wild mouse that I remember. A wild mouse roller coaster typically has a very boxy, rectangular layout to its track. This had big long diagonal sweeps, including a big drop before the back-and-forth segment that's the distinguishing feature of wild mouse coasters. The ride seems weirdly long, but it turns out it's only like fifty feet longer than the Michigan's Adventure wild mouse. It certainly sprawls much farther. I'm used to the wild mouse having a really compact footprint. Weird, which is good.

At this point, believe it or not, we had only one roller coaster to ride again. So we did not. We took another round on Thunder Run, this time with me tipping off

bunny_hugger where to see the dragon within the mountain. And then we could get to that last roller coaster. So ... we did not. The thing is, that last roller coaster was The Bat, another boomerang coaster. Like the Boomerang at Six Flags Mexico shown in pictures here recently. Or like the Boomerang ant Elitch Gardens. Or the Sidewinder at Hersheypark. Zoomerang at Lake Compounce. Sea Serpent at Morey's Piers in Wildwood. These are all the same design, and they all make

bunny_hugger sick. The coaster pulls you up a hill, drops you to do a loop, a helix, another loop, and then up a second hill ... then back down, backwards, and the backwards part always nauseates her, even through her motion sickness pills.

There are some remediation strategies. One is not to ride a coaster on an empty stomach. The cliche is that having a full stomach makes you throw up, but, having eaten a reasonable something stabilizes the gut. We'd just had a dozen small doughnuts, though. So we went to the only Freestyle Coke stand we could find, to try this special exclusive purple soda that signs all over the park advertised as just for Canada's Wonderland. Being thirsty seemed like a bad idea anyway. And time doing nothing challenging afterwards helped; we figured after the ride would be our big gift shop visit.

And so we went to The Bat, and the ride was ... not bad, actually. I mean, it was the same ride as we expected. But

bunny_hugger didn't get as nauseated as she expected. And the restraints didn't batter my head as badly as I expected. All went, really, pretty well.

We puttered around the lovely evening light, and the gift shop, for a while. And kept thinking hard about this retro-70s-style park hoodie that was just over the top in the right ways to delight us. But the price was a bit much for that, even if it had stripes of yellow, orange, and 70s Red for the collar and cuffs and waistline. It's just ... mm. So very tempting, though.

There was about an hour left in the park day, all of it in glorious night. We took the chance to walk back towards the Minebuster, but stopped at the Antique Carrousel because, of course we would. Here we took two rides, I believe, one on a surprisingly full carousel and one where we rushed to get on the chariot. You don't get many chances to ride an actual antique chariot, especially not one that's 'yoked' to the horses in front. I think this is only the second time we've been on one such. (The other was at Elitch Gardens.)

We stopped by Behemoth, confirming that by night its entrance looks like something from Batman: The Animated Series. But for our last ride of the night? I thought the Mighty Canadian Minebuster would be a good choice. And it would be. There wasn't much queue, and the ride, going off a long way into the darkness over the closed water park, felt ... not quite like Kings Island's The Beast, roaring off into the void. The city lights were too much to make that illusion work. But it evoked something of that, going well away from the body of the park and only just coming back.

And ... we had, like, five minutes left before the park's closing hour. If we hurried, we could get on something again. Minebuster? Or ... you know, Yukon Striker is right next to it. And so that's what we dashed onto, for our final ride of the night. And the penultimate run of Yukon Striker for the night. Plus, since we'd gotten a stuffed doll and some other stuff, we had something to put on the conveyor-belt system this time.

This, finally, closed out the park. We walked back enjoying the scenery and what was still lit and all, and the last couple of rides running. Apparently nothing much had a queue at the 10 pm closing hour. And also marvelling that we had, indeed, ridden all sixteen of the roller coasters we possibly could have in a single day at Canada's Wonderland. Our trip was off to a great start.

This did leave us the problem of where to eat. We'd have happily gone back to the Indian place from the night before, but they had already closed. We went instead to a Tim Horton's where we discovered they served breakfast anytime. And that they had BeyondMeat-based breakfast sandwiches, with sausage and everything. This was perfect. ... After a bit of a delay, when one of the workers came over to apologize but they needed to make a new batch and it would be a while. Which was fine; I was expecting them to apologize that they had run out. Meanwhile we were on our third Tim Horton's visit for, so far, 36 hours in Canada.

Off to bed. We would be getting on the road in the late morning.

PS: Will I ever actually climb this pyramid? Let's just see how long I can drag out that question. 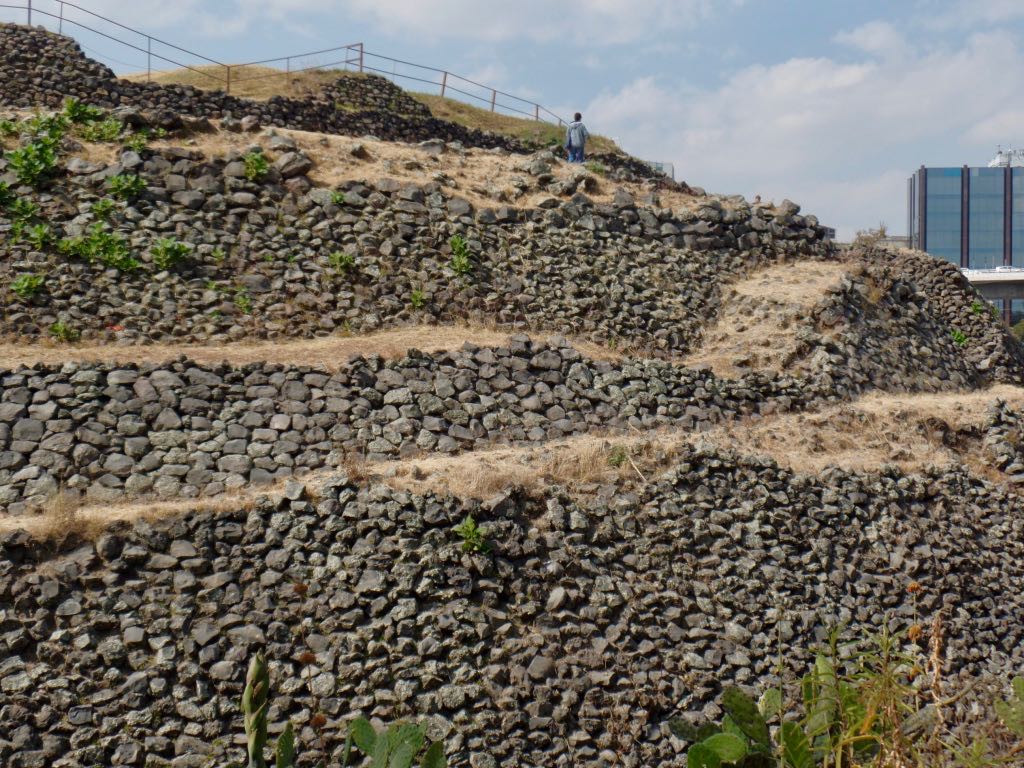 A view from the west face of the pyramid, showing off all three levels and how the levels get to be less level away from the north side's ramp. 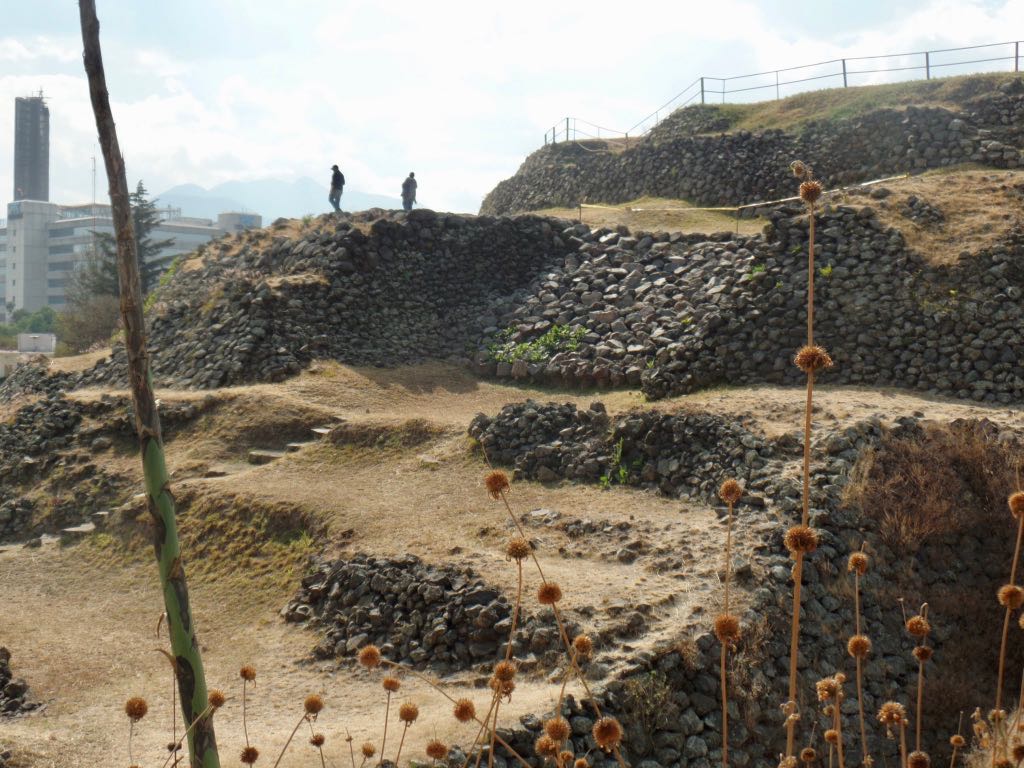 The more run-down face of the pyramid; note how many tiers are chained off by fences or tape. 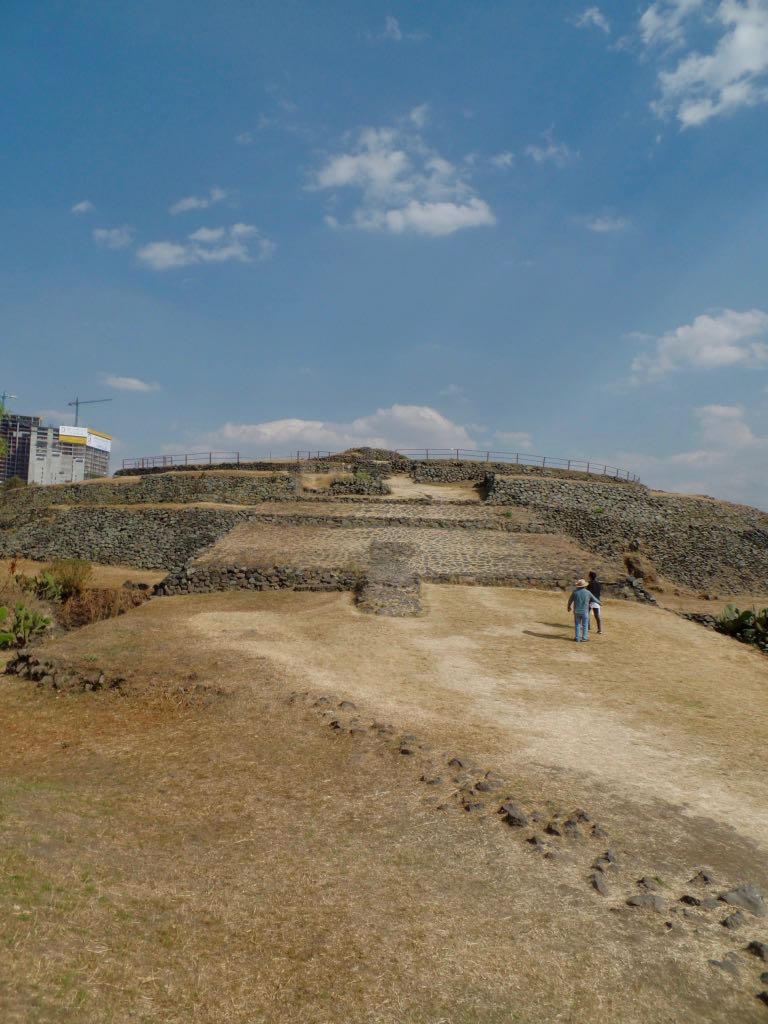 The long ramp running from the north face up the pyramid. It's in quite good shape and while I wouldn't want to attempt it in a wheelchair, it's probably accessible to people using a crutch.