Our Toronto-area hotel had a check-out time of noon, and in view of the weather we were looking to go to a small park near Buffalo, maybe an hour and a half away, that shouldn't need a full day. We went to sleep confident that we could sleep in through 10:30, maybe 11 am, and still have plenty of time to WHAT IS THAT GOING OFF AT 7:30 IN THE MORNING?

So you maybe remember that when we checked in we saw the wedding rehearsal and all for an Indian family. As we left for Canada's Wonderland we passed people dressed in wedding-class garb, looking dazzling and in that mood of happy-but-stressed-out. Well, I infer that the wedding itself was on Saturday, and that they planned on an outdoor reception, and that the DJ decided he had to test his sound equipment and that's why he started blazing music at top volume at 7:30 am on a Saturday. I stumbled out toward the elevator trying to figure what kind of complaint I could make to the front desk, or if it would be enough to just show up looking like I'd been rattled out of bed at 7:30. The elevator wasn't responding, though, and the one time an elevator did open at my floor it was already full of people dressed for the wedding. And by that time the music had dropped down to a sane level, or cut out altogether, so I went back to our room. I accomplished nothing but the important thing is that I had a plan and acted on it.

When we woke up again, only this time meaning it, and more tired and cranky than we wanted, we had the breakfast question. Tim Horton's it was, then, for a fresh round of the BeyondMeat sandwiches. It turned out these had only just been rolled out from test market to nationwide that week. Also that by ``nationwide'' they mean ``the nation of Canada, of course''. There's no telling whether it will come to the mid-Michigan Tim Horton's world. We have a similar frustration with A&W Canada, which apparently has Impossible Burgers that we haven't seen here. Still, it's good to have at all and we did our best to encourage Tim Horton's in doing more of this.

And so we drove mostly south, driving for the western border between Ontario and New York. US Customs asked what we were bringing into the country and we realized ... gosh, we hadn't really picked up anything. Oh, this stuffed doll, and I pointed to the Behemoth plush that was our big Canada's Wonderland souvenir. It seemed odd that we hadn't had more. Still, this brought us on another toll road, a spur of the New York Thruway. This was another toll road that ... didn't ... have any toll booths. Just a warning that we needed to text some number to arrange payment which, yeah, good luck. I've never successfully sent a text message to a strange number with my phone. I'm not much better at sending text messages to people I know. I think all my exchanges have been with people who texted me first and I just hit reply. Granting, my cell phone is about 840 years old --- its company logo is Mergenthaler --- but still. Anyway I haven't been called into Toll Road Jail so that's that.

Our goal was a park on Grand Island, which is a good-sized island in the Niagara River, basically just across the river from the cities of Niagara Falls and of North Tonawanda.

Fantasy Island was, until 2017, known as Martin's Fantasy Island, for its then-owner Martin DiPietro. There's still one or two things that say Martin's on it, but now, the park's owned by Apex Parks Group, the company that saved Indiana Beach. Before 1994 the park was known as Two Flags Over Niagara Fun Park. It was only known as this for two years. And apparently, they changed the name because of Martin DiPietro's buyout. It seems to have come before Six Flags could file a writ of srsly in trademark court. Before 1993 it was called Fantasy Island and that's as much intrigue as there is in the park's name history. Wikipedia mentions some of the slight cryptic weirdness in ownership you expect from a small park, like that it went bankrupt in 1982, was bought by Charles Wood, sold to International Broadcasting Corporation, and then re-bought by Wood after IBM went bankrupt. There's mysteries here. I refer to the Wikipedia site claim that the kiddie ride Bugs ``was in storage behind the wave pool [ from its 2011 removal ] until end of 2016 season when Martin DiPietro took it with him as he departed from the park''. Let that sentence roll on your head a while.

But this we expected to be a half-day park, something we could explore fully in like four hours. The park was scheduled to close at 7 pm. It has three roller coasters, only one of which was of particular interest. The weather was cool and rainy, and threatening worse rains. Which is why we chose to go to Fantasy Island on Saturday. Sunday looked likely to be better. Monday better still. So if we had to lose time in a park because of rain, Fantasy Island looked like the one we'd least regret having rained out.

And it was threatening to be rained out. We got to the park about 1:30, to overcast skies that kept looking ready to be rainy overcast skies. I put some sunscreen on my face and neck, and that was all I'd need. I had a t-shirt, regular shirt, and my Blackpool Pleasure Beach hoodie, plus the GateKeeper rain jacket I always keep in the car.

bunny_hugger similarly had several layers ready plus the d'Efteling rain poncho. The day might be short. That's all right. Few people were there. We might be able to ride everything in two hours, weather permitting.

Trivia: The first Bose-Einstein Condensate made, in 1995, was made with two thousand atoms of rubidium. Source: Nature's Building Blocks: An A-Z Guide To The Elements, John Emsley. Looking back down the first stretch of the ramp's slope. They're volcanic rocks gathered to make most of this base and it felt weird and a little unsettling walking up this after seeing that portrait of the area enveloped by a volcanic flow. 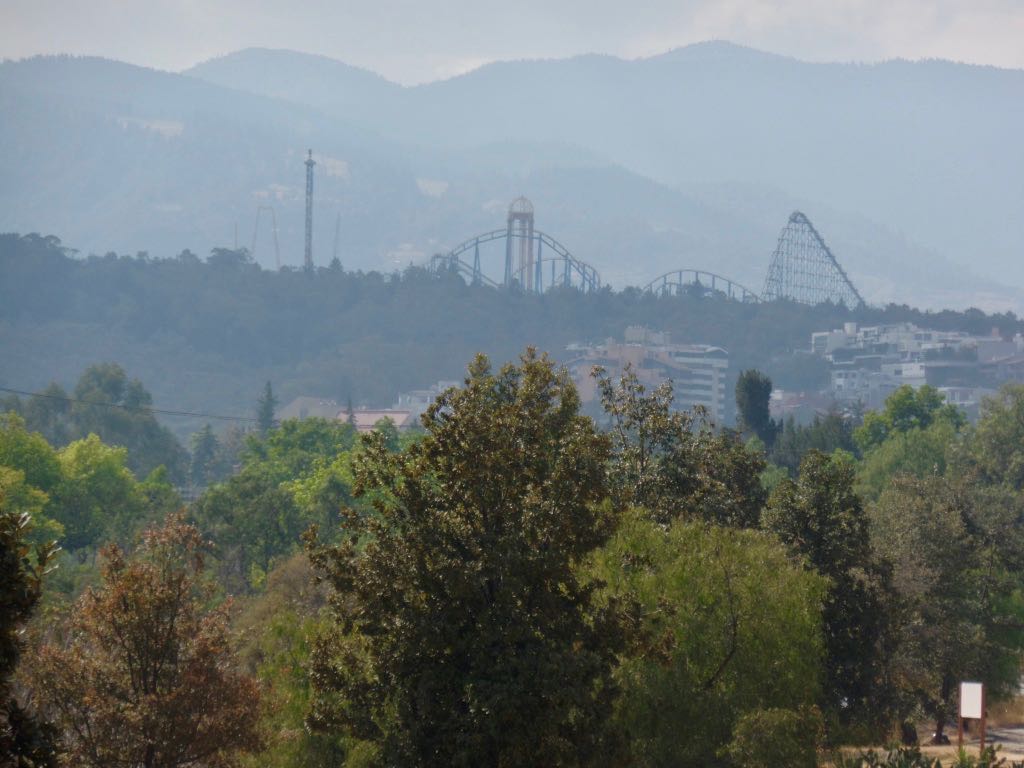 A close-up of something that's been in the background of many of the north-facing pictures: Six Flags Mexico is very visible from the pyramid. The roller coaster is Superman: El Último Escape, and the other tall structures are drop towers or reverse bungee rides or the like. Part of the first tier of the pyramid, roped off just enough to ensure that you only go there if you're really confident in your footing. I had the sense this was a new and maybe temporary restriction.